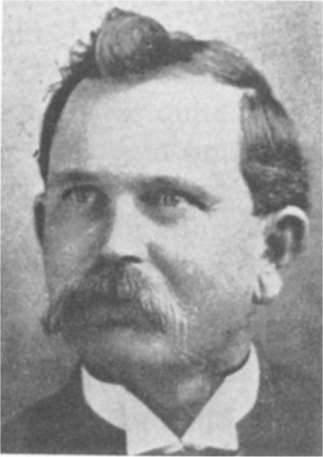 Biographical Sketch On The Life Of J.M. Harrel

John Martin Harrel was born at Decatur, Illinois January 11, 1868 of Albert G. and Sarah Jane Harrel. At the age of thirteen he moved with his family to Texas, settling near Vernon. This move seems to have been a part of the great Westward migration then in progress. Good schools were scarce in Texas, but he did attend the ones available until he was eighteen years old, at which time he went to Whiteright, Texas to attend Grayson College. (Whiteright is almost two hundred miles east of Vernon.) At Grayson College he did two years of college work, which made him an exceptionally well educated man for that time and country. In 1887 he moved from Texas to Oklahoma Territory, getting a claim of an excellent quarter section of land two miles east of Rocky. Here he farmed and began a teaching career that lasted for about twelve years, and also began preaching at the age of nineteen. His first school was a "subscription school" at Orange Blossom, a half mile south of where Rocky is now located. He taught in several places in Washita County, including Foss. At Foss his school was conducted in a "half dugout" near where the Foss cemetery is now located. A year or so before going to Grayson College he became interested in vocal music and prepared himself to teach it. We have no details of where he got the formal training for music, but he did teach vocal music for some years, mostly in the summers. The whole family was a "singing family" and with three of his sisters he prepared and published a song book for church use, probably one of the very first in that section.

Within a few years he sold his claim to John Ashby and moved to Cordell. His brother, Jim, had also gone to Oklahoma and filed on a quarter section of land. In 1900 when the county seat was moved from Cloud Chief to Cordell, he owned the land on which much of Cordell was built. Jim subdivided his farm and sold lots, both residential and business. In order to help get the town started, he gave a number of good lots to people that he felt would be an asset to the community. When John sold his farm at Rocky, he bought a lot from Jim on North College Street, across the street from the College Street meeting house, and built a good residence. John had begun preaching by this time (so had Jim) and he built several other houses in the northwest part of Cordell and sold them. He also bought two farms northwest of Cordell and retained these until he moved from Cordell in 1922.

Jim Harrel sold the lot where the College Street church now stands to the church on January 5, 1905. The following restrictive clause in the deed is of interest: "To have and to hold for the use of the said church of Christ and upon the express conditions that no organ or other musical instrument be used or kept and that no fair, festival or other practices unauthorized in the New Testament be held had or conducted in upon or about said premises or in any of the buildings constructed thereon and in case any such conduct act or unauthorized practices are committed or performed in upon or about such premises or any organ or musical instrument be introduced into any house or edifice erected on said premises then the management and control of said house and premises shall be vested in the persons of said church of Christ who may be opposed to the organ or other musical instruments festivals or other things herein before named being used in said house said edifice or house erected on said lot." Of course students of church history know the history of and reasons for these restrictive clauses in church deeds. The copy I have of this was made by someone in the Cordell court house, and evidently they did not copy the punctuation marks, but one can see the problem these brethren were dealing with.The "digressives" had "stolen" most of the property from our brethren in the division over the instrument and missionary society. There has never been a successful "digressive church" in Cordell, nor a successful "anti" church.

John Harrel obeyed the gospel in Texas at the age of sixteen, but we have no direct information about who baptized him. Sister Ivan Ashby of Edmond, a daughter, thinks it may have been F. L. Young. His first sermon was preached in his brother Jim's "dug out" on the claim at Cordell. It was here that the Cordell church started. In addition to the two Harrel brothers, other early-day members were the Grogans, Cooks, Parmans, Frank and Ben Young and their sister, Locky. There were others, but Sister Ashby could not recall them. After all, this happened before she was born. John M. held the first meeting for the Cordell church, and continued to preach for it from time to time as well as all over the area. He was instrumental in the establishment of a number of congregations, but we have no detailed information about this. Churches were established early in Rocky, Sentinel, Dill City, Burns Flat (Then known as North Burns) and possibly other places. No doubt he had a hand in all of these. He never did what we call "local work," but traveled and preached extensively in Oklahoma, Kansas, Missouri, Texas, and Arizona. This work began in 1887 and continued into the forties when the ravages of time took their inevitable toll.

Preachers of his time were often forced to defend their cause in public debates, and this he did well when so called upon. His first debate was with a Methodist preacher when he had been a Christian only a year. (The denominational preachers delighted to get some boy just starting to preach into a debate. However, this must not have worked so well for them, for by the time I began preaching in 1926 most of them "did not believe in debates.") His kind, gentle spirit made him an effective teacher of the Word. When he first went to Oklahoma territory, many Indians lived there, and he often came in contact with them. He always carried something to give them, and they often shared their things with him, such as meat and corn.

He published no books, but did leave a very large collection of sermon outlines, many of which he had illustrated and made into chart sermons. (Audio-visual teaching is not new!) He was a good artist and used this ability well in his presentation of the gospel. Along with his brother Jim, he was the first preacher of the gospel in Washita County so far as we have been able to determine. Both of these men were active in locating and building Cordell Christian College, Jim donating the land for it, and serving on the first board. Both of them taught in the school. Along with all of this, he constantly preached, going back again and again for meetings. For instance, Sister Ashby has notices of a meeting he held in Okeene in 1905, then again in 1908 and 1909. His last meeting was in Douglas, Arizona.

About 1894 he met Miss Ada S. Stevens, whose parents, James W. and Sally Stevens, had moved to Boggy Creek. (near North Burns - now Burns Flat) John M. was preaching some at North Burns and he met and converted this family. On January 9, 1895 he and Miss Ada were married. John M. was teaching a rural school north of Bessie, and in this school building his brother Jim performed the marriage ceremony for John and Ada, then John did the same for Jim and his lady.

In 1922 he sold out at Cordell and moved to Edmond so his children could attend Central State College. He spent the rest of his long life in Edmond and the last of many congregations he helped establish was the church in Edmond. Along with his whole family, he enjoyed good health throughout life. In 1949, when he was eighty-one years old, he lay down on Sunday afternoon for a short nap. He did not awaken. His companion continued for ten more years. What is mortal of these good people sleeps at Edmond.

John M. Harrel was truly one of the pioneer preachers. He worked in a new country under hardships we cannot now imagine, but he worked and built well. The many people he led to their Lord, his good family, the many congregations he helped establish, the Christian College he helped build all speak of this very useful and dedicated life. Only eternity will reveal the extent of it. One of his favorite sayings was, "Study to show thyself approved unto God, a workman . . .” God will always bless the memory of such men!

J.M. Harrel is buried in Edmond, Oklahoma In The Gracelawn Cemetery. The Cemetery Is Located On The Northwest Corner Of Danforth Avenue And North Blvd. Enter the cemetery from North Blvd. and take the third left head back toward the work building. Just before the end look to your right to find the grave of J. M. Harrel. The GPS location below will show you the exact location of the grave.

"Thy Word Is A Lamp Unto My Feet, And A Light Unto My Path"

Note: Special Thanks Is Extended To Jeff & Annette Smith. Jeff Is The Great Great Grandson Of J.M. Harrel. The Smiths Made The Pictures Of The Grave Of J.M. Harrel Available In July, 2003