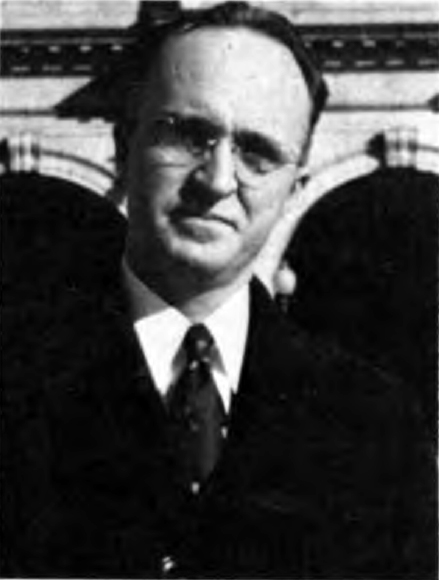 The Life of C.E. McGaughey

Caswell Ellis McGaughey was born July 18, 1905 of John and Laura Lipscomb McGaughey in Montgomery, Texas. His mother was related to David Lipscomb. They lived for a time in Sugarland, Texas, but moved to North Zulch in Madison county while Ellis was still quite young. His father was the manager of a cotton gin in North Zulch. Here Ellis grew up, attending the public schools and graduated from the Madison County High School in Madisonville in 1923. He, along with his parents were members of the Methodist church, but F.B. Shepherd taught him “the way of The Lord more perfectly,” and with his parents, he became a member of the New Testament church, being baptized by J.S. Newman in 1917.

In 1922, while still in High School he preached his first sermon at North Zulch, Brother Shepherd influenced him to enter Abilene Christian University in 1923 and he continued there for three years, preaching almost every Sunday.

While there he met Miss Pauline McCanlies, a student there, who had grown up on a ranch near Moran, Texas. They came to love one another and on August 17, 1926 they were married by Brother Shepherd. She bore him two sons and walked faithfully by his side to the end of his life. The sons are Paul E. and Don H. Both are graduates of a Christian College and each became a gospel preacher. Brother McGaughey did a period of work in Hawaii, and hoped to work with Paul in some work with small churches he was then doing, upon his return from Hawaii, but poor health kept that from becoming a reality.

Following their marriage they taught a two-room school at Gordon, near Post, Texas for a year, then returned to Abilene where he completed the requirements for his degree, which he received in 1928. Immediately following his graduation, he moved his young family to Kirkland, Texas (they now had Paul) where he did his first full time church work.

From Kirkland they moved to Elk City, Oklahoma, where he had a very successful work for about six years. While in Elk City he began to preach on a new radio station, K.A.S.A. The station did not have a lot of power, but it was the only station in a large area, and so it covered considerable territory. This was some of the first radio work done by any of our people. About 1934 another preacher or two joined with him in producing a daily program that did much good for a number of years. He also held many meetings, a work at which he was very successful, and had a debate with a Mr. Fuchs, a Primitive Baptist preacher.

Everett O’Dowd came from Texas and served as his moderator. The debate was conducted in the Bulo school house, Northwest of Sayre, Oklahoma, and Brother McGaughey did good work. (I was there.) The acquaintance I made with him there has been a blessing to me, for he was that kind of a man.

From Elk City he moved to Springfield, Missouri where he worked with the South National Avenue church, moving from there to Tenth and Francis in Oklahoma City, where he worked about five years, going from there to Washington, D.C. to work with the Fourteenth Street church which later became the Sixteenth Street church. He was in Washington about nine years. The Sixteenth Street building was erected while he was there, and he conducted a radio program that was aired on a network that covered most of the Northeast.

The war years were included in this period, and he and his wife gave much help to many young people who went there to work. In 1951 he moved back to Springfield, Missouri and spent the next three years in evangelistic work, which he dearly loved and in which he excelled.

In 1954 he returned to Oklahoma City to work with the Thirty Sixth and Prospect Street church and remained there until 1957 when he moved to the McGregor Park church in Houston, Texas. After about five years of work in Houston they built a new house across the street from the campus at Oklahoma Christian College and moved there. He again entered full time evangelistic work, and so spent the next twelve years. In 1975 he moved to Honolulu, Hawaii, where he worked two years with the Kennaumoku church, returning to Oklahoma City in February, 1977.

His evangelistic work took him into all parts of our nation, into Canada, England, Scotland, and Ireland. He had some unusually great meetings in some of the foreign countries. During his lifetime he conducted more than twelve hundred gospel meetings, preached more than twenty thousand times, and saw more than seventeen thousand people respond to the gospel invitation under his preaching. Many years ago he began to work with children in his meetings. He would conduct a Bible drill with them just before time for the evening worship. Probably he was the originator of the term “pewpacker,” for that is what he called the children in these classes. He also found time to work with teenagers. He was a popular speaker, appearing on many special programs, such as college lectureships. He gave special lectures on preaching at Abilene Christian University, Harding University, Freed-Hardeman College, and Lubbock Christian College. He also wrote for some of the brotherhood papers, especially for the Twentieth Century Christian and Power for today. He published one book, the Hope Of The World.

Ellis McGaughey was an unusually effective man in both pulpit and personal work, and this quality came to show itself quite early in his preaching life. In 1934 he came to Stratford, Oklahoma, where I was doing my first “local work.” The Methodists, Baptists, and Pentecostals started an “opposition meeting” a week before he got there. Our meeting started on Sunday, and on Friday night they closed that meeting, for we had the people. Eighty one people responded to heaven’s invitation in that meeting, and he conducted many meetings when more than that were obedient to The Faith. He loved The Lord and believed that people were lost without him. He wanted the lost to be saved and prayed and worked to that end. He was diligent in personal work, feeling that it was a matter of “snatching souls from the burning.” A fellow preacher said of him: “No man can tell another man that he is going to hell without Jesus, and do it with more loving concern that this is so, than C.E. McGaughey.” This is certainly a true evaluation of him and his work. He did not enjoy telling people they were lost, but always depending upon The Book to back him up, he did so when necessary.

About 1960 he developed a malignancy which was effectively controlled for several years. He was faithful to go for his treatments and check-ups, and was determined to win that battle. But in August, 1976 it began to spread, and the Doctors were powerless to control it. He suffered much and for a long period. Brother James Baird tells that after Paul left his bedside for the last time while he was fully conscious, that Brother McGaughey called him back and asked him to read Jude 24 and 25. “Now unto him that is able to guard you from stumbling, and to set you before the presence of his glory without blemish in exceeding joy, to the only God our Saviour, through Jesus Christ our Lord, be glory, majesty, dominion and power, before all time, and now, and forever-more.” Brother Baird adds: “These verses describe the heart of his life and faith and can well serve as his benediction to all of us who loved him.”

On July 12, 1977, six days before his seventy second birthday, The Lord saw fit to terminate his great suffering and called him home. The service was conducted the following day in the meeting house of the College church in Oklahoma City by Morris Thurman, Howard Norton, and James Baird.

Sister McGaughey continued for a time, but soon joined him in that better land. Truly a great man has fallen, but he will rise again. His influence will live forever, through the thousands he brought to The Lord by his unusual teaching and faithful example. May God bless his loved ones who miss him so much.

-Loyd L. Smith, Gospel Preachers of Yesteryear, pages 220-223. Originally appeared in the pages of The Christian Worker, January, 1978. Note: This is a timed piece. Some of those enlisted as living may be now deceased.

Directions To The Grave of C.E. McGaughey

C.E. McGaughey is buried in the Arlington Memorial Park Cemetery, north of downtown Oklahoma City, Oklahoma. On I-35, just north of the I-40 interchange take the Frontage Road and turn right on NE 36th St. Go a couple of miles, and you will see the cemetery on your right. Turn right on N. Midland Blvd. and enter the cemetery at the side exit. As soon as you enter, take the first right, and go just past the first left, and park directly in front of the mausoleum in the distance. Enter the cross area and just to the right, a couple of rows in will be the McGaughey plot. 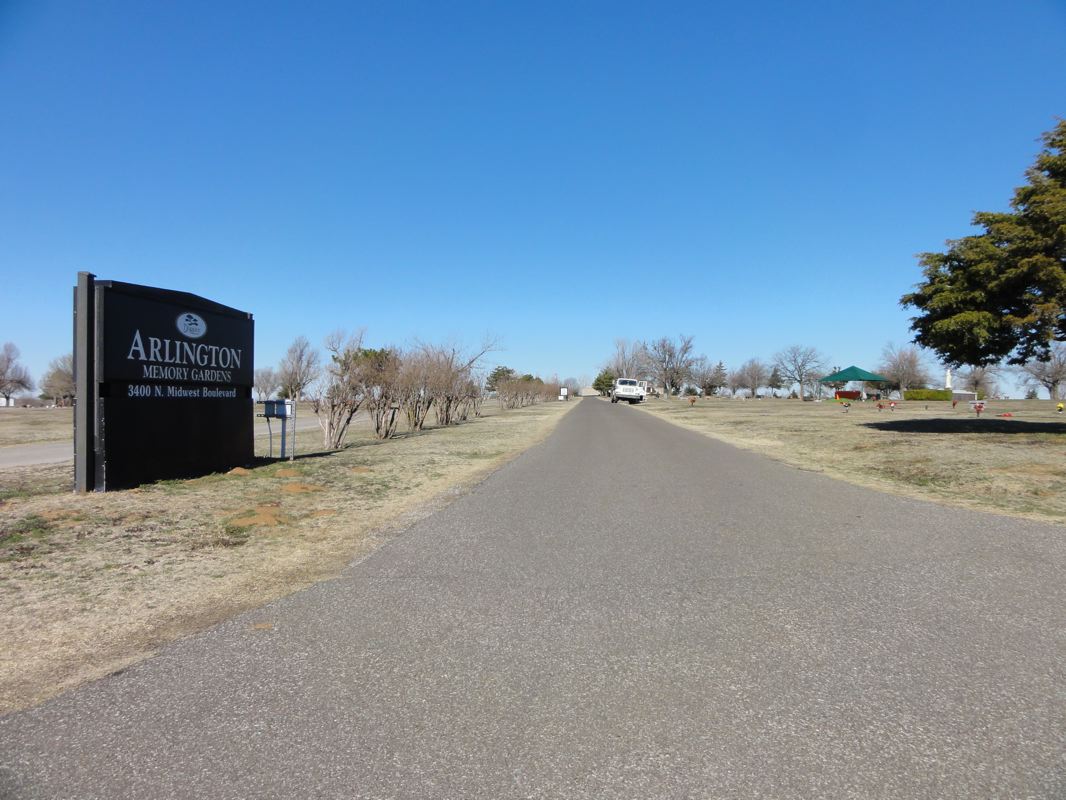 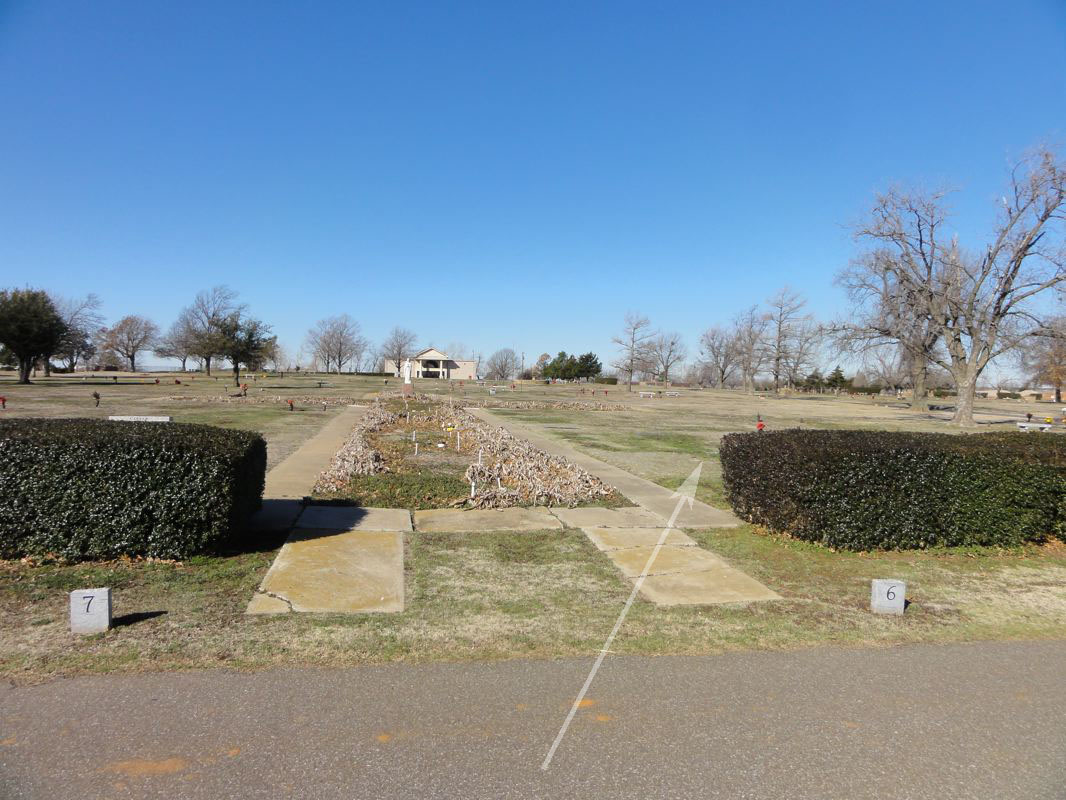 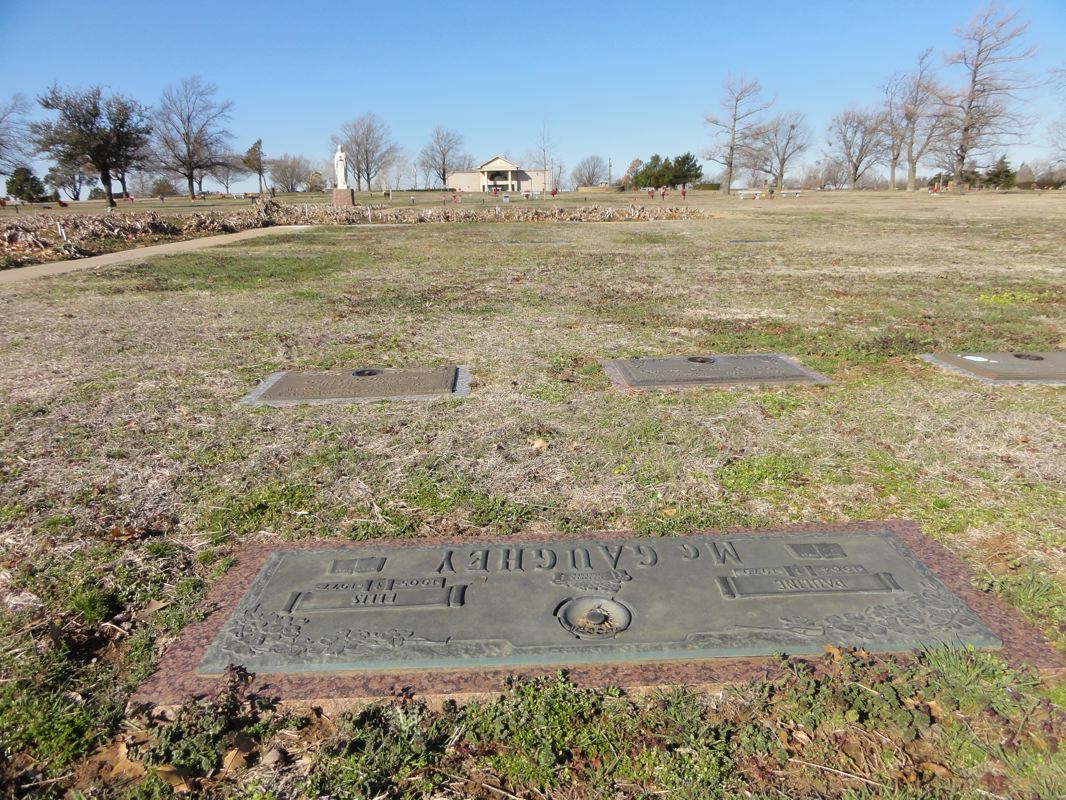 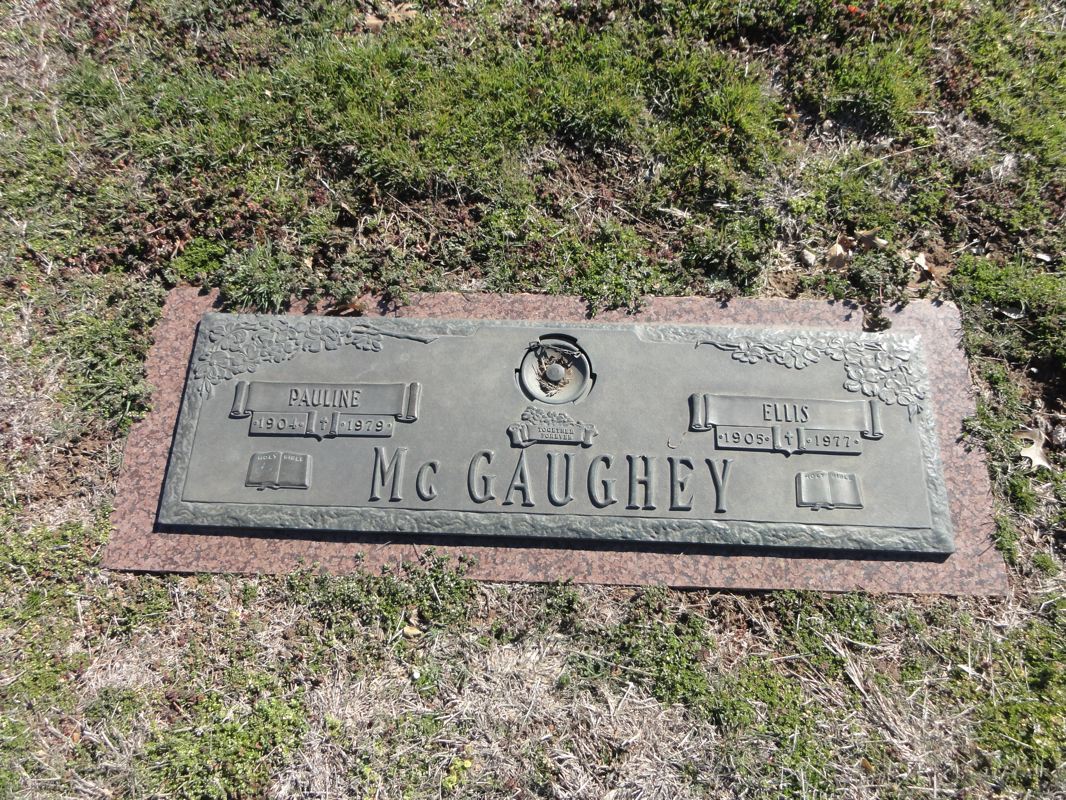 Web editor note: In February, 2012, it was my privilege to visit the grave of C.E. McGaughey. I was invited to take part in the annual Affirming The Faith Lectureship in Oklahoma City, Oklahoma. Getting into the area early, I was afforded the opportunity to put about 2000 miles on a rental car in order to locate graves of gospel preachers and church leaders of yesteryear in a wide area. My fifth day I was able to visit the grave of C.E. McGaughey.