Sketch On The Life Of Samuel C. Wall

Samuel Claud Wall, the subject of this article, was another of those great men who provided their own material needs by secular work, end yet managed to preach the gospel and lead many people to The Lord through godly living and faithful preaching.

It is a special pleasure for me to write of him, because I knew him as a child and young man. He preached and taught school where I spent my first years. He and my parents were close friends, and they visited in our home and we in theirs. He was born on March 24, 1880 in Obion county, Tennessee near the small community known as "Frog Level." His parents were Joseph David and Ophelia Wright Hall. Her people lived in Aberdeen, Mississippi. Five children were born to them, and after her untimely death, Joseph was married to Rebecca Jane Jones, of the Frog Level community. Seven children were born of this union. Joseph had entered the Confederate Army at the age of sixteen, and evidently early in life became a Christian and remained faithful through-out life. His faithfulness is reflected in the lives of his children. Claud, of the first marriage, John and Phillip, of the second marriage, became gospel preachers, with John and Phillip doing most of their work in West Tennessee, while Claud worked much farther West.

We do not have the date of his baptism, but it must have come rather early in life, for he seems to have always been interested in preaching the gospel. In a farm family with a dozen children there was little money for education, but his two older brothers, Luther and Clarence, worked at making cross ties and other such work as they could get, and provided the funds for him to attend Freed-Hardeman College, then in its infancy at Henderson, Tennessee for one year. Here Claud studied the Bible along with the usual secular subjects, including penmanship. He developed an unusual talent in the Spencerian method of writing, and became so proficient that he was often called upon to produce such work for special purposes. (When I graduated from the eighth grade, and needed cards to send with my graduation announcements, my father wanted me to have Brother Wall make them instead of having them printed. I still have one of them, and it is beautiful.) Following this year in Freed Hardeman, he went to Denton, Texas to teach penmanship in a business school, and also in the hopes that the climate there would improve his health. He remained in Denton until the opening of the Cordell (Oklahoma) Christian College in 1907, where he went to teach penmanship and also to continue his own college studies. While in Cordell he began to preach, thus beginning a life-time career of teaching and preaching.

Throughout his life he took the gospel into the "highways and by-ways" often at his own expense. While in Cordell he often preached in Rocky, a few miles South of Cordell on the Frisco. Here he met the Underwood family, faithful Christians, and in due time was married to Miss Mattie Mae, of that good family. After their marriage, they each attended Freed-Hardeman College for a year, then returned to Rocky to teach, where Claud was Superintendent of the school and she taught in the grades. She was my teacher when I was in the second and third grades. I thought she was a good teacher.

Claud did much preaching for the Rocky church and in nearby places conducted many gospel meetings in the summers. While in Rocky they bought a five acre tract from Mattie's mother and built a nice house on it. Not too long after this, a tornado destroyed the house and severely injured Brother Wall and others who were in the house. Along with the other furnishings, Claud's religious library was blown away, but many of the books were found scattered across the fields and returned to him. He cleaned them and used many of them to the end. In recent years his son, Dr. Leon Walls, gave many of these books to the library of Oklahoma Christian College in Oklahoma City. The first thing built in their rebuilding program, was a storm cellar in which they lived while rebuilding the house.

In 1914 a son was born to them, their only child. He is Dr. Leon Wall. He is now retired, but has spent his life in the teaching profession as did his parents. Naturally, Claud took much pride in his son, teaching him to memorize much of the Bible, and he delighted in having Leon recite these things to any who wanted to listen.

As is the case with all teachers, he always felt the need for more schooling himself, and so enrolled at Southwestern Teacher's College, Weatherford, Oklahoma, where he attained a "normal certificate." They both continued to teach in rural schools in Washita and Kiowa counties. Mattie was also continuing her education, and became an accomplished artist in the use of pastels under the tutelage of josh Lee, who was then teaching with them in Rocky, and later taught in Oklahoma University, and served the sate as a Senator for a time. Brother Wall was always busy with Sunday appointments and continued to conduct many gospel meetings.

In 1922 they sold their home in Rocky and moved to Abilene, Texas where he continued his work toward a degree. He majored in Education and minored in Bible, spending much time in the study of Greek. While in A.C.C. he was a member of the Harding society, New Testament Interpretation, and the Oklahoma Club. He preached much on Sundays in such places as Munday, Anson, Baird, Merkel, etc. While in Abilene, one of his brothers lost his wife, leaving him with two small daughters. Claud and Mattie took them and cared for them until their father was able to keep them again.

After completing the work toward the degree, they returned to Rocky and began to look for a school. He soon found one at Eastview in Greer county, to the Southwest. Eastview was a good consolidated school, one of the best in the region. Mattie taught there with him, and while there he preached for two years for The Church in Mangum, the nearest he ever came to being a "located preacher". At Eastview Mattie fell victim to cancer in February of 1924. W.T. Vaughn, of Cordell, who preached so many years in that region, conducted the service, and she was buried in the Lone Star cemetery at Rocky. Following this tragic event, he found himself deeply in debt, but when the churches that knew him learned of his situation, they soon provided the necessary funds, and the following year he was able to pay all his obligations.

At the time of Mattie's death, they still had his brother's children. He kept the children together with the aid of a good housekeeper, but soon his brother came for them. Eventually Claud was married to Miss Cula Vee Smoot, a graduate of Eastview High school. He had known her family for quite some time. She wanted to become a teacher, and with his help, she did. In order to be able to teach together, they took a two-room school near Rocky for a year, and then moved to New Mexico, where they taught at St. Vrain, about twenty miles West of Clovis. The rest of his life was spent in New Mexico, where he taught in the following places: St. Vrain, Field, (a school district of 138 square miles.) Lingo, Grier, Kenna, Dora, and McAlister.

Through these year both he and Cula continued to do college work in the summer, and he preached in meetings as he was able. They attended the Las Vegas New Mexico Normal University in Las Vegas. While there in the summer time he did what he could to help the small church then meeting there, and in this way became a close friend of Glenn Annear and Otis Gatewood. After she attained her Bachelor degree and he his Masters, he had more time for summer meeting work. On April 10, 1930, a daughter, Helga Flo, was born to them. She is now Helga Flo Dickerson, of Houston, Texas (1977).

While preaching in New Mexico he kept busy preaching in such places as: Grady, Ruth, Melrose, Clovis, Tucumcari, Mesa, Vausey, Portales, Bora, Highway, Clayton, Truth or Consequences, and perhaps other places. A man of his ability was a great help to the small congregations of that region at that time. He also preached over in West Texas in such places as, Texaco, Farwell, Bovina, and Lariat. His preaching work took him into Texas, New Mexico, Oklahoma, and Tennessee.

The years in New Mexico were busy and fruitful both as a teacher and as a preacher. He finally moved to McAlister, South of Tucumcari, where he continued to teach and preach. On the morning of November 12, 1945 he complained of chest pains. He was rushed to the hospital in Tucumcari, but it was all in vain, and his very useful life ended a few years short of "man's appointed time of three score and ten." His body sleeps by Mattie's side at Lone Star.

His son writes: "There is no way to measure the impact on human lives and on The Church of his sixty five years on earth. Only God can do that! But from his many travels, and the many churches where he preached, he must have touched many lives, and many people will undoubtedly witness to this fact in the after life. It can by truthfully said that he always gave his best, unselfishly, not for material gain but in his zeal to spread New Testament Christianity."

This seems to be a good evaluation of the life of Claud Wall. May God bless his memory and those that knew and loved him.

Directions To The Grave Of S.C. Wall

Samuel Claude Wall is buried in the Lone Star Cemetery in Rocky, Oklahoma. Rocky is located SW of Oklahoma City. Traveling west on I-40 go Exit 66 in Clinton and turn south on Hwy. 183. Travel south 16 miles to Cordell. While in Cordell be sure to visit the grave of O. H. McGavock. Go Travel south of Cordell another 11 miles to Rocky. Just before entering Rocky look off in the distance to the right and see the Cemetery on the west side of the Railroad tracks. Turn right on E1260, cross the tracks and go to the cemetery in the distance. As you enter the cemetery go about midway down the gravel road and stop. Go into the grave section to your right, searching for a half-round concrete grave cover. The Wall plot is in front of it. 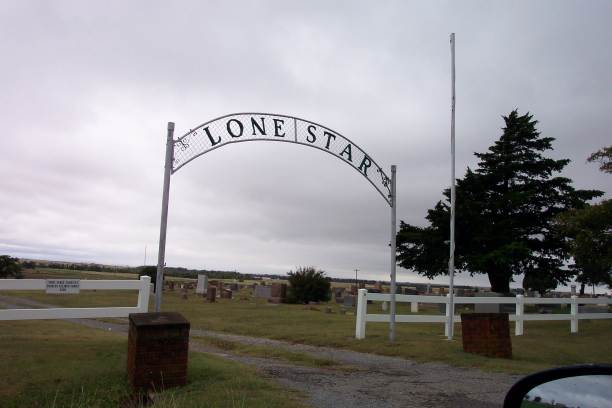 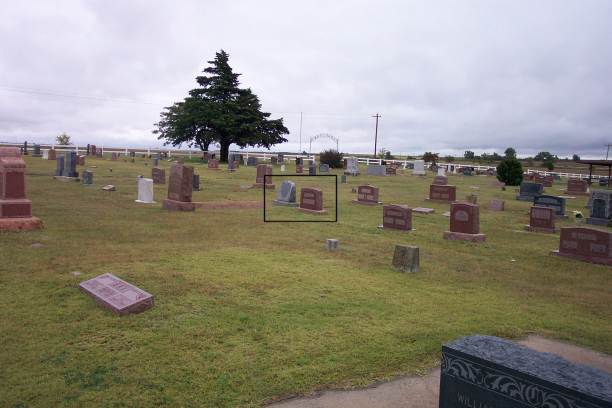 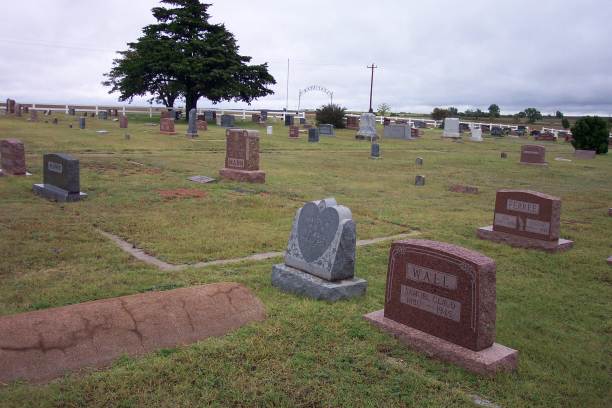 View Looking Back Toward The Entrance Of The Cemetery 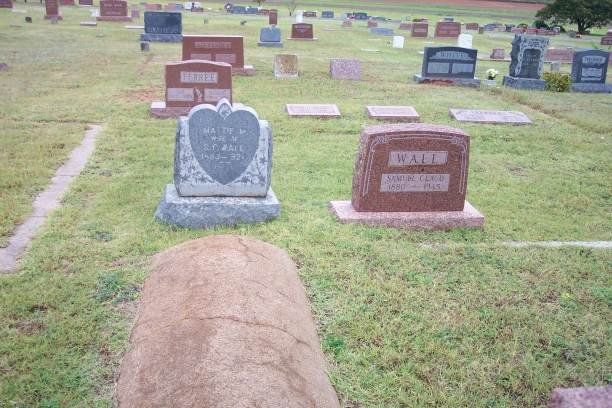 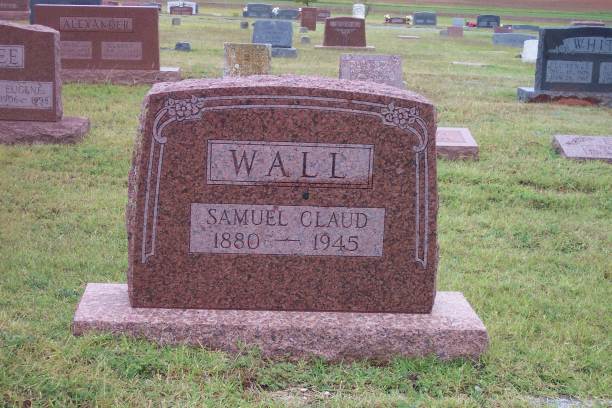 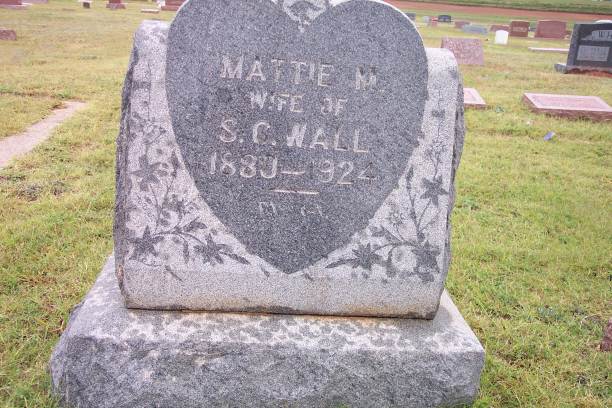