Biographical Sketch On The Life Of A. F. Waller

Alfred Fredst Waller lived almost sixty-nine years upon this earth and faithfully preached the gospel for more than forty six of them, or approximately two thirds of his life. He was born January 27, 1898 in Montague county, Texas of Alfred Franklin and Della Catherine Waller, who were faithful Christians. His father was a farmer, but also served as an elder and evangelist in The Lord's church. Besides A. F., he had six sons and three daughters, all of whom were faithful and active Christians. On August 18, 1912, at the age of fourteen, A. F. obeyed the gospel, being immersed by A.P. Hardin.

The family moved from Texas to Oklahoma while A. F. was still quite young, settling near Chectoah in Eastern Oklahoma, and later near Ada. Here A. F. grew to manhood, attending the public schools that were available, and later did some work in the Extension Division of the University of Southern California. He became a good Bible student in the only way that can be done, and was able to faithfully and capably preach The Word and to defend it against the advocates of error. We do not know when he first decided to be a preacher, but he preached his first sermon in 1920, when he was twenty two years old, at Centrahoma, Oklahoma.

On August 12, 1917 he was married to Miss Eva Sarah Hoover, daughter of Noah and Mary Hoover, who lived near Ada, Oklahoma. The ceremony was performed in the Haskell School House in Ponotoc County, Oklahoma by John L. Sims, a preacher from Stonewall, Oklahoma. She too had been reared in The Church, and was well equipped to walk by the side of her preacher companion, which she did for the rest of his life. Two sons were born to them, Raymond and Al. Raymond died in 1958, preceding both his parents. He had served as a deacon and a song leader in The Church. He left his wife, Aline Hurst Waller and two sons and a daughter. Al is now (1985) serving as evangelist for the Tenth and Bell Street church in Shawnee, Oklahoma. Not only were his two sons faithful Christians, but the same is true of all his grandchildren.

In the early years of his marriage he farmed, and some where along the line learned to be a good barber. In the first twelve years of his preaching he supported his family largely by secular work and in meetings and Sunday appointments. He did manage to conduct a good many meetings and was able to lead many people to The Lord.

In the early thirties, just as the depression was beginning to get bad, he began to do "local work". He did such work at Stuart and Hugo in Oklahoma. We are quite sure these were the first two places where he so worked, but are not sure which of these came first. He continued full time preaching for the rest of his life, though there were times when he did supplement his income by selling furniture, at which he was very adept. His work took him back and forth across the nation, from Maine and North Carolina on the East Coast to California and Oregon on the West Coast, with work in such states as Indiana, Missouri, Kansas, Oklahoma, Texas, New Mexico, and possibly others. In many of the places where he lived he did radio work in addition to his regular preaching. He wrote for the Firm Foundation, and other "brotherhood" periodicals, had several debates, including the Baptists, Seventh Day Adventists, and First Christians. About 1935 he was working with The Church in Guthrie, Oklahoma, a very difficult field at that time. While there he had a "preacher's meeting," or "lectureship", as they are now called. He invited me to have a part in the program, and of course I was very happy to go, and here I met him for the first time. Each of us moved to California in the late thirties, each settling in the wonderful San Joaquin Valley, and so we were together from time to time. While there he preached in Tulare, Exeter, and Visalia. Perhaps his longest stay was with the Exeter church. While in Exeter he had a very good radio program each Sunday morning, that was well received by the brethren, nearly all of whom listened to it. In addition to his sermon, he always gave news of happenings among the churches in the San Joaquin Valley. In California he conducted a good many meetings, and his debate with the First Christian man was in Visalia, and was perhaps a forerunner of The Church there. The Exeter church had a "preacher's meeting," which I attended, and we had one in Fresno, which he attended, and we often met at other such gatherings, singings, etc. He was a good man, a very likable man.

About 1942 he moved from California to Artesia, New Mexico, then to Marlow, Oklahoma. From Marlow to the Armstrong Avenue church in Denison, Texas. He also worked in Haskell, Texas, Hillsboro, Texas, Cisco, and Breckenridge, Texas. In Oklahoma, in addition to Marlow, he worked in Ratliff City (formerly County Line) and Ahloso. There were many small places where he did "mission" work.

His son, Al writes: "What a happy, glorious time growing up in a family that loved The Lord and one another. I am thankful I grew up in a home whose parents were members of The Church. What would I have been and what would my world be without those lessons, teachings and examples about heaven, the truth and the soul, as exemplified by Mom and Dad. We stayed with, worked with and associated with the best people in the whole community as Dad preached in meetings and in local work."

He was concerned that he "fulfill his ministry", and urged that upon his sons. He faithfully worked to the very end of life. He was living in Tupelo, Oklahoma and working with The Church there. He preached on Sunday, September 25th and had plans to begin a gospel meeting on Monday night, the 26th. But that day his voice was forever stilled upon this earth when he suffered a heart attack in Tupelo on September 26, 1966. He had "fulfilled his ministry."

The final service was conducted in the meeting house of the Southwest church in Ada, Oklahoma by Doyle Harris, of Coalgate, Oklahoma, Stanley Sayers, of Roff, Oklahoma, and Haskell England, of Atoka, Oklahoma. The mortal man sleeps in Rosedale cemetery at Ada.

His companion continued for almost another twenty years, The Lord calling her home in June, 1985. Her services were also conducted in the same meeting house and she sleeps by his side in Rosedale.

A. F. Waller was a good man. I knew him well, and he was always a man who stood by his convictions. He left a good family. The faithful will meet him again.

Directions To The Grave Of A. F. Waller

Alfred F. Waller is buried in Ada, Oklahoma in the Rosedale Cemetery. Ada is located SE of Oklahoma City. Traveling east on I-40, take Exit 181, Hwy 177, toward Shawnee. Continue south of Shawnee on Hwy. 177 about 30 miles and turn left on Hwy. 13 toward Ada. When coming into Ada take the Richardson Loop north (Hwy. 1/3E) to North Broadway Ave. Go north on North Boulevard. Go one block and take a left on Armory Rd. You will see the cemetery on your right. Go to the end of the road and turn right on N. Oak Ave. Enter the first entrance to the right. Upon entry into the cemetery, and immediately bear to the left, around to the left of section 115. Go to the first left. Section 104 will be on your left, and section 102 will be on the right. Go to the middle of section 102 and look in toward the flagpole to the second row. The "WALLER" monument is just behind the "BRUNNER" monument. In October, 2004 I visited the grave of A. F. Waller while on a trip with one of our missionaries to Scotland, Graham McDonald. We went through Ada on Saturday afternoon. The office was closed, and the cemetery was huge. We drove around one section of the cemetery for an hour looking. Then just before giving up we decided to drive to the other end of the cemetery and drive around. We found it within five minutes. Lucky find!?!?!? 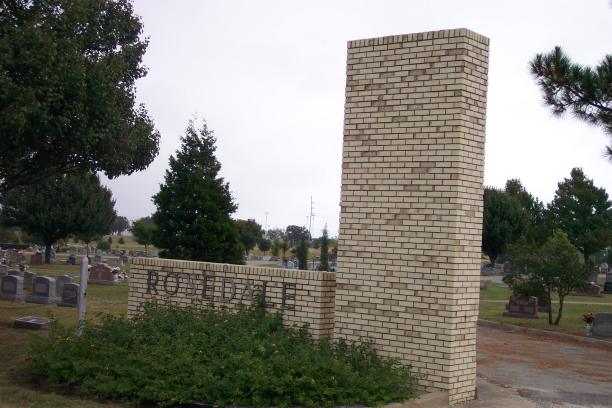 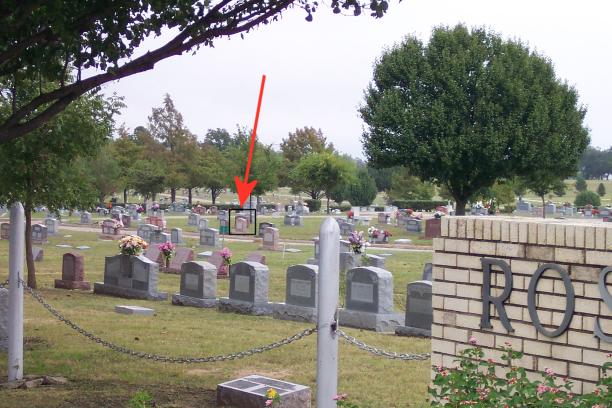 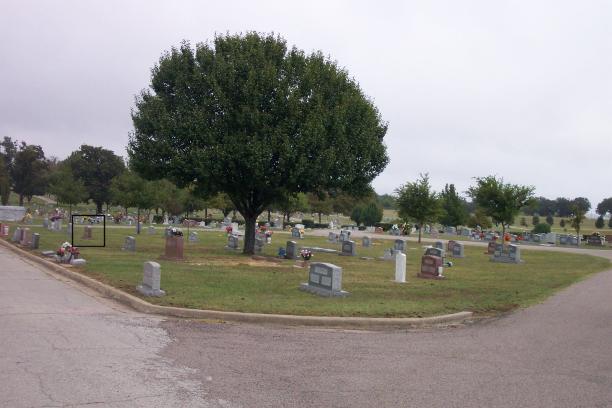 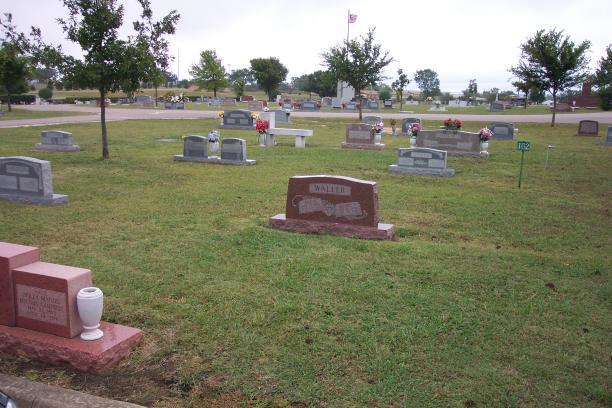 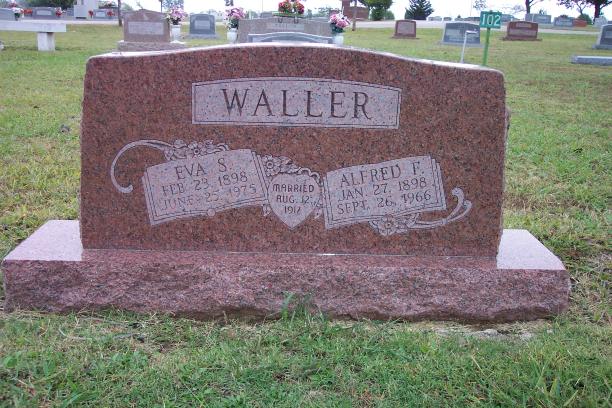 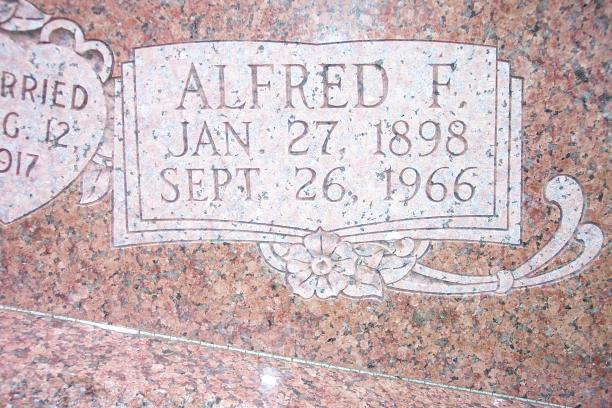