Biographical Sketch, Lambert
Signature of G.C. Brewer
Cover of Christian Youth Magazine, 1912
Advertisement For Meeting At Walnut Street
One Of The Last Photos of G.C. Brewer
Signature from Autobiography
Poem From Mountain Eagle To Promote 1906 Debate
Directions and Grave Photos

Biographical Sketch Of The Life Of G.C. Brewer

Grover Cleveland Brewer was born December 25, 1884, at Pulaski in Giles County, Tennessee. His parents were Hiram and Virginia Arietta Brewer. He had two brothers, Charles R. Brewer, gospel preacher, and teacher at David Lipscomb University for a number of years and Robert Larimore Brewer.

Schools he attended included Kimberlin Heights, Nashville Bible School, University of Texas, Austin College, where he received the B.A. degree. Later Harding College and Abilene Christian College each awarded Brewer with a LL.D. degree. He was also honored later with the Carnegie Medal. 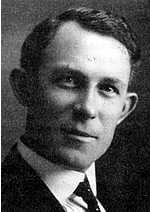 On October 24, 1911, he married Mary Elizabeth Hall. To this union, one girl, Virginia Elizabeth, was born.

Brewer was, by nature, a controversialist and he enjoyed and felt at home in any sort of controversy. He ranged through its whole field and ever acquitted himself as a champion whether his opponent was the worldly-wise Judge Ben Lindsay (whom he debated many years ago in Memphis on the subject of Companionate Marriage), or D. N. Jackson, the skilled Baptist debater, or some of the hobby-riding brothers among us. For more than 40 years, his booming voice and his trenchant pen were employed in the defense of that which his great heart and active mind believed to be right. In the pulpit, on the lecture platform, and in the classroom, he was equally at home. He ever exhibited that rare quality of being able to differ with others and, at the same time, to respect and love them.

During his last years, and until almost the moment of death, he was chiefly active in, and found his greatest satisfaction from, editing the Voice of Freedom, a paper designed to awaken the people in and out of the church to the threat of Catholicism and Communism, both religiously and politically inclined. It is our conviction that the stature of G. C. Brewer will continue to increase with the passing of the years; and that he will take his place, in the final estimate of history, among the greatest of recent generations.

Brewer had an excellent speaking voice and, in most places where he worked with a congregation, had a weekly radio program. Some of the places were KFYO in Lubbock, Texas, and WHBI in Memphis, Tennessee. In addition to his regular local work with a congregation, he usually held about twelve meetings each year. He was a prolific writer and some of his books included "The Model Church," "Brewer's Sermons," "Contending For the Faith," "As Touching Those Who Were Once Enlightened," "Forty Years On The Firing Line," and many pamphlets and other books.

Brewer wrote an autobiography during the last months of his life. He died June 9, 1956, at Searcy, Arkansas. He is survived by one daughter, Mrs. Perry Mason, two grandchildren, six great-grandchildren. Funeral service was conducted by George S. Benson of Searcy, Arkansas, and brother Ijams of Memphis, Tennessee. Funeral was held in Memphis, Tennessee, and burial was in the Memorial Park in Memphis. See Cemetery Map Here!

Published in the Mountain Eagle of Jasper, Alabama in 1906 before
the Brewer / Baker Debate

The fifth day of November,
Please don't forget the date,
Upon this day, you must remember
Brewer and Baker begin a debate.

The way it came up, you may guess, well
Perhaps you do not know,
But I will endeavor to tell
In these lines here below:

To preach the truth, Brewer
Came to Liberty Hill,
While there upon his preaching tour,
He met Baker and "Gimlet Will."

I suppose you all very well know
They think they are the very stuff
They like very much themselves to show
And try to run a bluff,

The way they did "Butt in"
Was through the query box,
With queries they buried me to my chin
They thought to scare me out of my socks.

Then, laughing in their sleeves
They came and took the hindmost seat
Saying, now answer them if you please
We know we've got you beat.

I quoted Scriptures plain and bare,
They could not keep t heir seat,
For fear the gospel I would declare,
They sprang upon their feet.

The questions then I did read,
If questions they were — indeed,
They said I could not swallow a fly
But upon buzzards I must feed.

Slanderous words, like the above,
Against the cause I represent
Were spoken and I fear not in love
But I hope they may repent.

I then very kindly stated
That I would meet them in debate
For I was ready and waited
My claims to substantiate.

The above is all so,
But if you need a little light
I can very easily show
The papers they did write.

Then come one and all
Bring your friends along
Be there when order is called
And hear the opening song.

Come from near and a long way
And stay the four days through
There will be a place for you to stay
We're preparing to take care of you.

Come, Mr. Baker to Liberty Hill
When the hour hand points to ten
Bring your "flunky" little "Gimlet Will"
For I am ready to begin.
--G.C.Brewer

Contributed by Mark McWhorter, 04.2012
(taken from his original personal papers in my library)

Directions To The Grave Of G.C. Brewer

G.C. Brewer is buried in the Memorial Park Cemetery in Memphis, Tennessee. I had the opportunity to visit the cemetery in January, 2002 with my good friend Jimmy Ferguson, preacher of the Stage Road Church of Christ in Memphis.
Take I-240 to Poplar Ave. Go west and the cemetery will be on your right. Enter at the Poplar Ave. entrance. Take your first right and go to your first left. Go past the Rest Rooms and continue past the Crystal Shrine Grotto. Go on down to just past the Flower Shop and turn to your first left. You will then see section three coming up on your right. Go past the Section 3 sign and before you come to an oak tree stop and go into section 3 about 8 rows in Lot 132 #6. The actual GPS location of the grave is: 35°06'43.4"N 89°52'31.0"W / or D.d. 35.112067, -89.875283

Note: If you visit during office hours, the people are very helpful, and will provide maps.