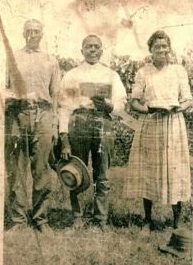 Gospel preacher. Dubose Croom, known as "Little Bose," was the son of Parthenia and Dubose Croom. His mother had a connection to the Marshall Keeble family in Nashville, and invited Marshall Keeble to preach in the Oak Grove community in Chester County, Tennessee. A strong congregation was established with many converts as a result.

Bose became one of Marshall Keeble's "preacher boys" that traveled around the country with him learning how to preach. In the late 1930's or early 1940's, Keeble was preaching in Florida, but got an urgent message that he was needed someplace else. Keeble got Bose to continue preaching in his place while he was gone. A woman had expressed a desire to be baptized, but her husband objected. He threatened Bose by stating that he would kill him if he did. Later in the week, the woman requested to go through with her desire, and Bose baptized her into Christ. At that moment, the husband hit his wife in the head and killed her. He also hit Bose in the head, resulting in him being incapacitated the rest of his life. Bose eventually was placed in a nursing home in New York, where he stayed the next forty or so years. Family members would visit him when they could, and his sister Bertha paid for most of his expenses from her own income as a teacher. .

-This information was lifted from Find-A-Grave with the permission of Tom L. Childers. His resourse for the info on this site was made available courtesy of Al Price, gospel preacher in the Henderson, Tennessee area.

More On The Croom Family

Parthenia Croom's life is an amazing story. She was born into poverty in Middle Tennessee in 1870, in a form of unofficial slavery in which black families after the Civil War could only share crop on large plantations and where the landlord often gave her beatings. She decided to flee such abuse and wandered away to places she had never been. After going as far away as she could and totally exhausted, she stopped at the next house. The family living there near Nashville, Tennessee, happened to be the forebears of Marshall Keeble, the legendary African American preacher among Churches of Christ.

They took her in and shielded her until she got through her teenage years. At that time, the family encouraged her to leave and make her own life. Ending up in Louisville, Kentucky, she met and married Dubose Croom, with whom she had two sons (Dubose "Little Bose," and Frank), and two daughters (Bertha and Ada). They moved to Union City, Tennessee, and then to Chester County, Tennessee.

Remembering the Keeble family that had befriended her and raised her, she often kept in touch. Upon learning that Marshall Keeble had become a preacher, she immediately began to make arrangements for him to come to the Oak Grove community to conduct a gospel meeting. Keeble had phenomenal success and the congregation there became one of the first that he helped to establish with the help of people like Parthenia Croom. She was religious in every aspect of her life and left a remarkable spiritual legacy.

One of her daughters, Ada, married Jarmon McHaney and together, they had ten children, one of whom was Carroll McHaney, age 95 in 2011. Today, he serves as an elder in the North Henderson Church of Christ in Henderson, Tennessee. -- Information and photo courtesy of Al Price, Henderson, TN.

According to Carroll McHaney, Parthenia's parents were Toliver and Dinah White.

-This information was lifted from Find-A-Grave with the permission of Tom L. Childers. His resourse for the info on this site was made available courtesy of Al Price, gospel preacher in the Henderson, Tennessee area.

Directions To The Grave of Dubose Croom

The Croom family plot is located west of the city of Henderson, Tennessee. On Hwy. 100 head east out of town toward Jacks Creek. From the end of town, where the bypass ends, head out 2.7 miles and turn left on Glendale Rd. Go 1.1 miles and turn right on Lott Rd. The Oak Grove Church of Christ and cemetery will be on your right. They have built a new church building, and the old one still stands. Between them is the cemetery. Best to park to the right of the old building, and walk into the cemetery from there. The grave of Dubose Croom will be on the far side of the cemetery, toward the new building, on the front row. There are a few Croom family members buried there. 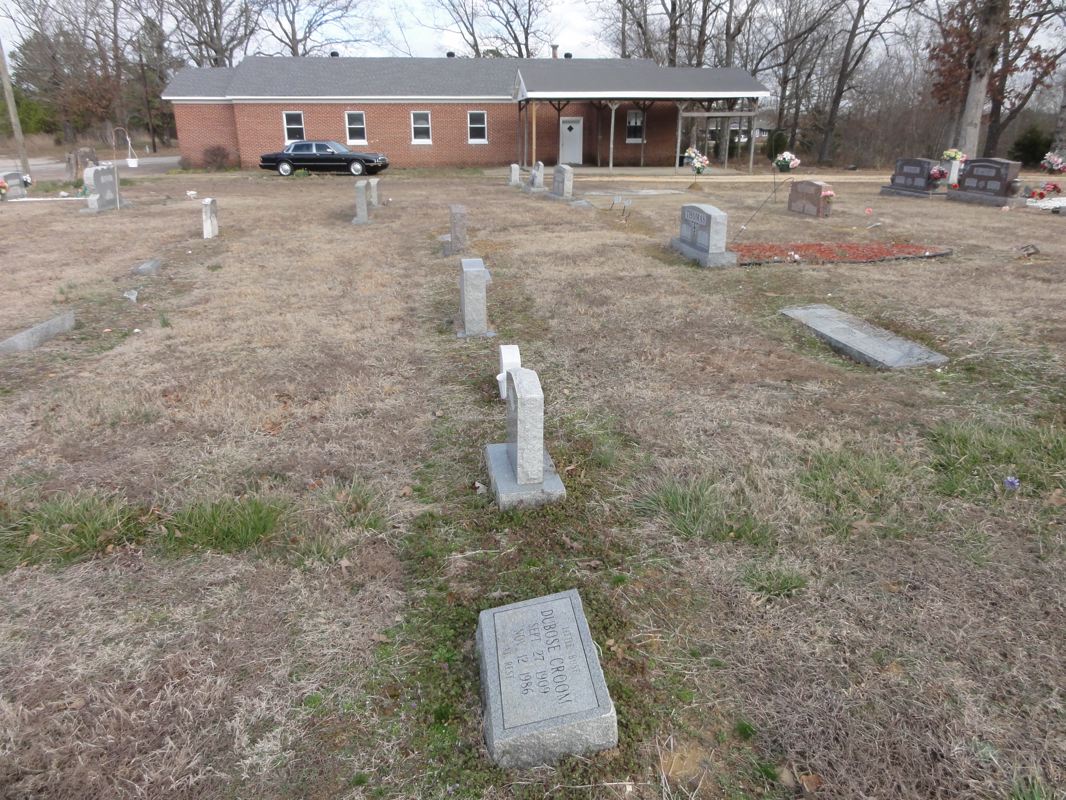 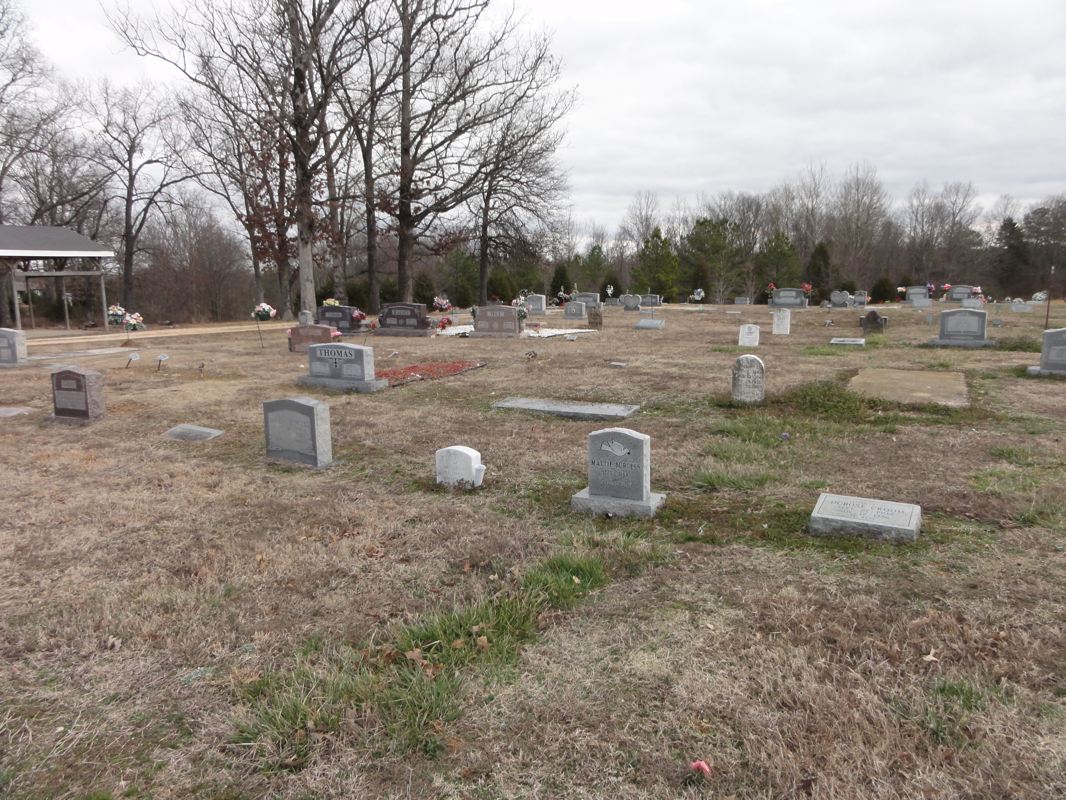 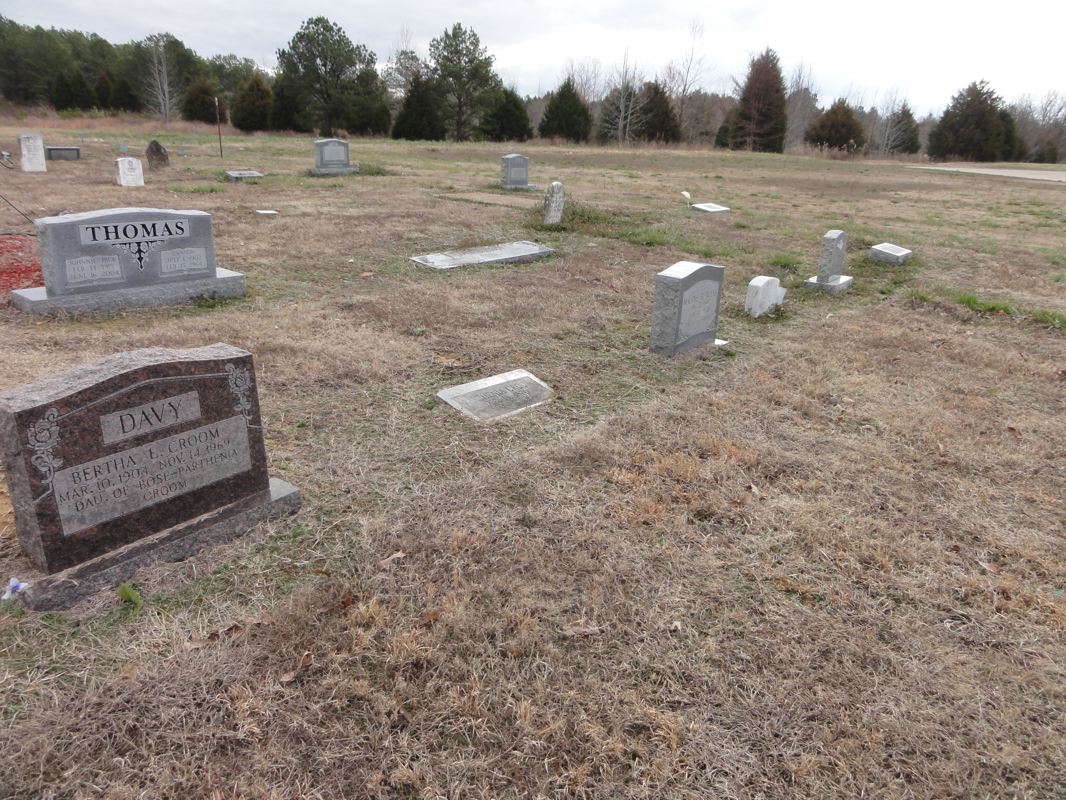 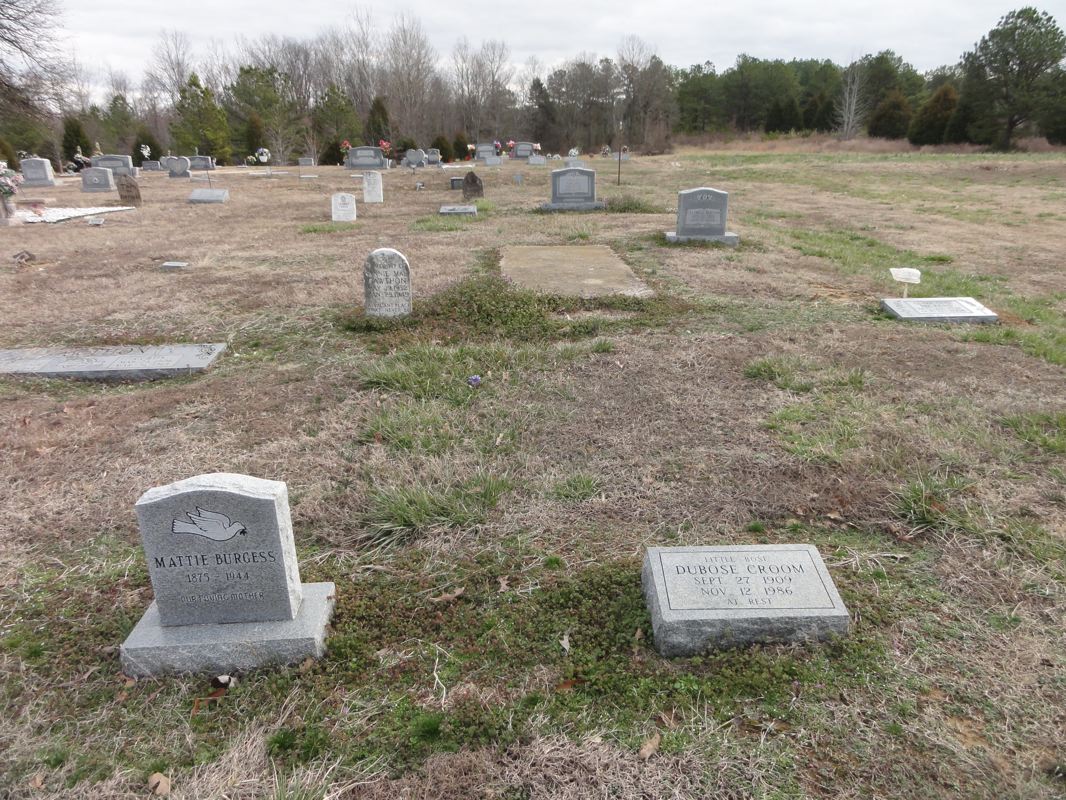 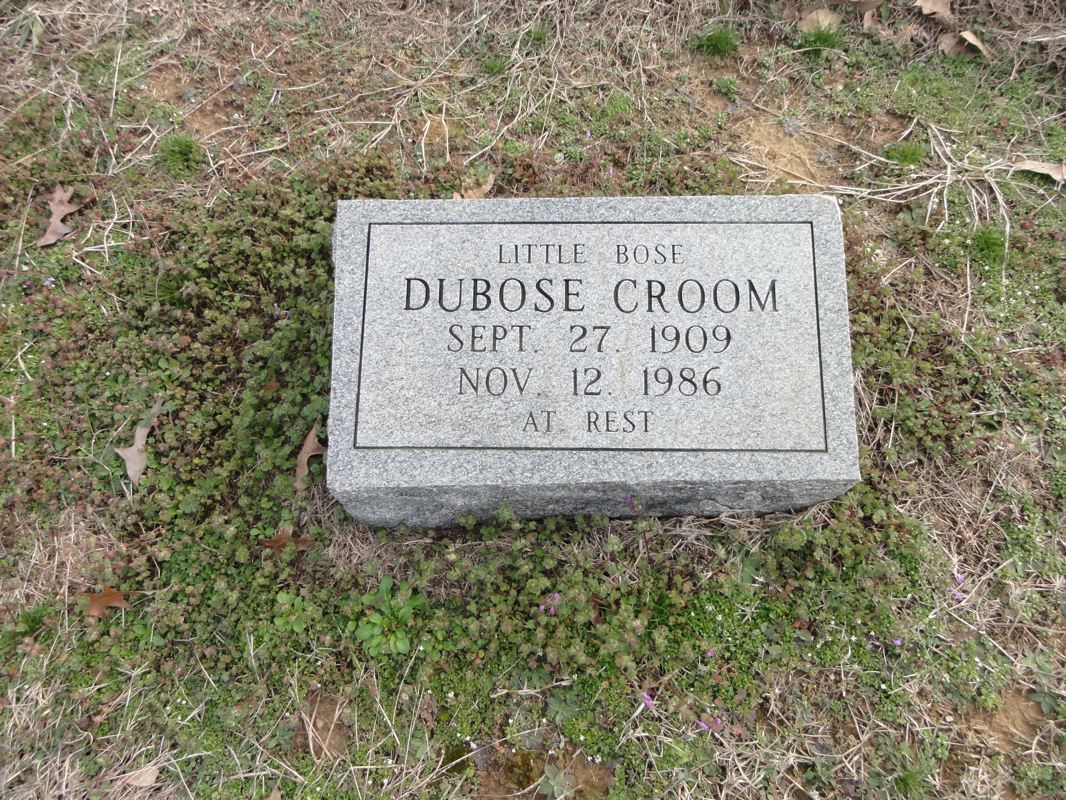 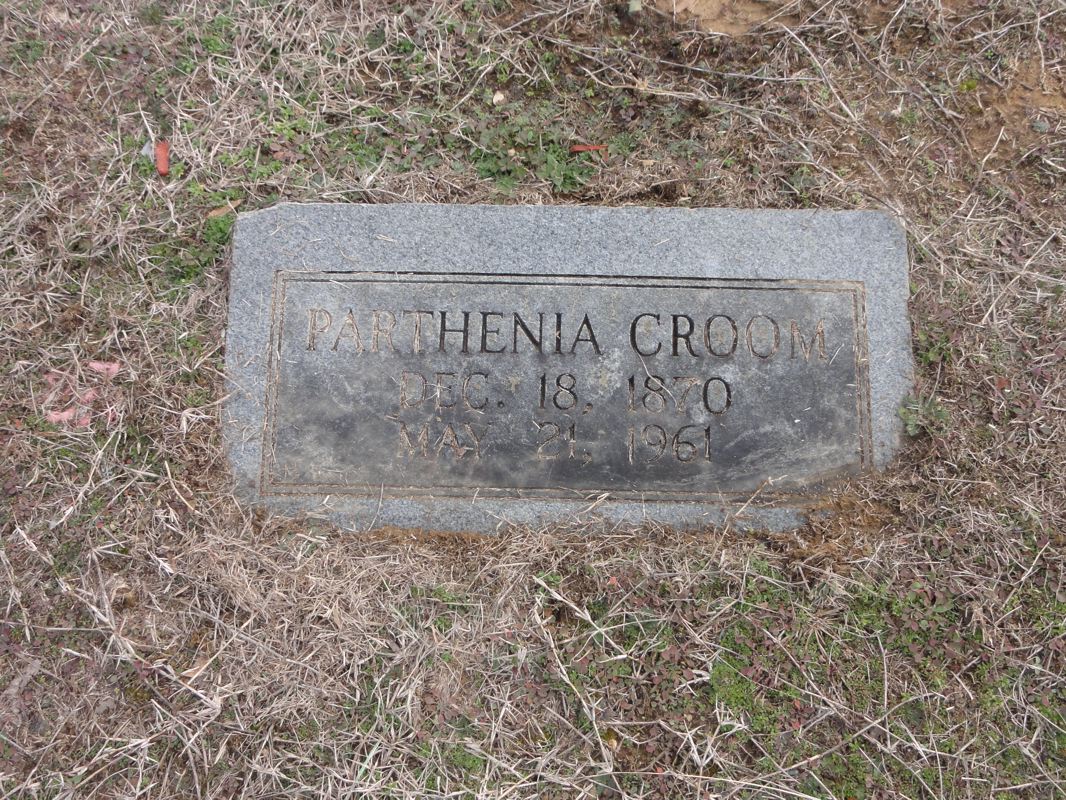