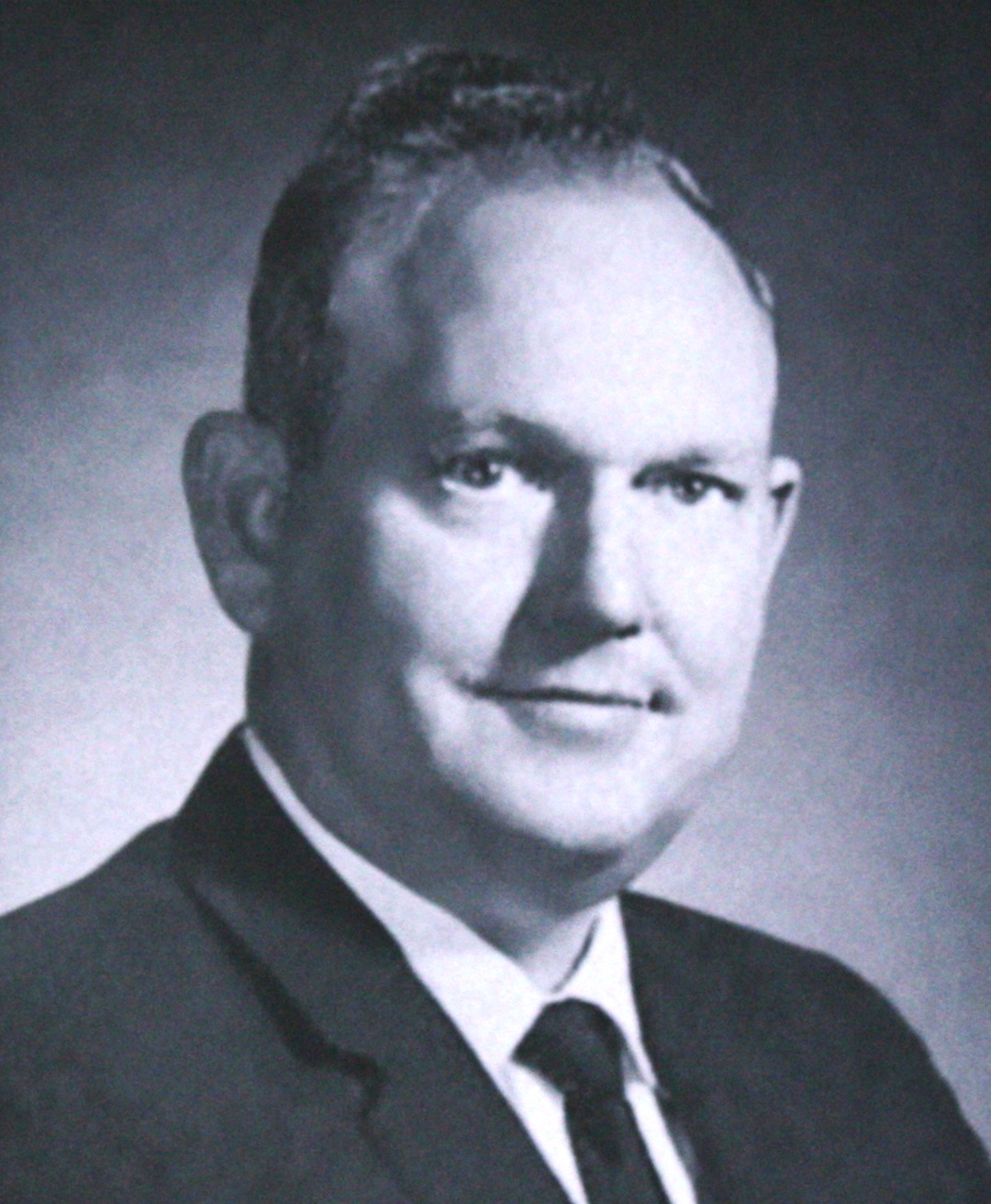 I Remember Kelley B. Doyle

"I was born in Strawberry, Arkansas!" How many times I can recall hearing that declaration from the dear ole man of music! My time at Freed-Hardeman College (now University), was short, but so very precious. It was during the year that our nation was celebrating its 200th birthday. At the beginning of the year, there were only two choral groups. One of them was the Freed-Hardeman Chorus, directed by Kelley B. Doyle.

I was in chorus for both semesters of my freshman year. During that time, I was immersed into a world of music, with music people who really loved to sing. No one could more gently meld those voices together like brother Doyle. He had an old school sternness about him that kept all the students on task, learning the pieces, and preparing for scheduled choral performances. But he made learning music fun. Though he was serious about music, he had fun, and he made those of us in his chorus have fun.

Performances with brother Doyle leading was always enjoyable. He was only in his early 50s when he directed us, but to us he was as old as the hills, mostly because of the stories he liked to tell. Nearly every weekend we were traveling to churches in the area for choral performances. His stories were always what kept the people entertained. Sometimes we wondered whether the people in the audience got more out of his renditions than they did from our singing.

The stories were many in number, but the one I remember the most was when he told about the young man who was fighting in a battle during war-time. The circumstances surround a time while in heated battle, the young man was burrowed deeply in a fox-hole, and praying with deep earnest. He said the young man prayed, "Lord, if you will just get me out of this fox-hole and back home safe and sound, I will dedicate my life to preaching the gospel." He would always pause at this time, as if to allow the congregation time to imagine that the young man did not stay true to his promise. Then, he would say, "And, he did preach the gospel for as long as he lived." Every time I heard him tell that story, I imagined that he may have been talking about himself, but I never knew one way or the other.

Kelley B. Doyle was an institution in and of himself. For many young people, he was Freed-Hardeman College. The year I was in chorus, Chapel Hall in Old Main was his domain. Daily we were surrounded by the onlooking eyes of great men of faith, men of history, and among churches of Christ, men of renown. If you have been there you know what I mean. It was in those rich surroundings that we learned our music day by day from our esteemed leader. During my time there we took a fall trip to Dallas, Texas and in the spring, to Charleston, South Carolina. In every place we went, with every congregation where we attended and performed, brother Doyle served Freed-Hardeman with a sense of great pride and loyalty. I heard him preach, I sat at his feet as he taught, not only music, but the Bible, and I do not recall a greater servant for Jesus while I was in his presence.

Today, upon the back wall of Chapel Hall, amidst the greats of old, resides the picture of Kelley B. Doyle. For the occasional visitor to Old Main, the picture may seem to be misplaced amidst such well-known greats as grace the old hall. Yet, for those who met there at 11:30 am every day for choral practice with the man from Strawberry, Arkansas, there is no one more worthy to grace that wall than Kelley Bant Doyle. Every time I see the picture, I see him standing in front of it, for many were the times when he ventured to that spot to hear how the chorus sounded from the back of the room.

Thanks old friend, for the memories!

It was my pleasure while attending the Freed-Hardeman Lectures in February, 2012 to make a trip out to Pisgah Cemetery, just outside of Henderson, to visit the grave of Brother Doyle. With me were Tom Childers and Dr. Arthur "Sonny" Shearin. Much was the conversation as to the good times we all had under the tutledge of our old friend, Kelley Doyle.

Doyle taught at Freed-Hardeman University from 1950 until his retirement in 1986. A former director for the university's chorus, Doyle also served much of his career as the music department's chairman.

He was known across the mid-South as an effective song leader and often led singing at FHU's chapel.

Doyle was a member of the Pinson Church of Christ in Pinson, Tenn. Doyle was born in Strawberry, Ark., and attended Harding University for three years, althought his under-graduate degree was from Lipscomb University.

He also received a graduate degree from the former George Peabody College in Nashville, Tenn. The college is now part of Vanderbilt University.

He is survived by his wife, Dorothy; two sons, K. B. and Daniel; three daughters, Celia Hunt, Karen Goff and Cereice Doyle; seven grandchildren; and one great-grandchild. Henderson, Tenn. 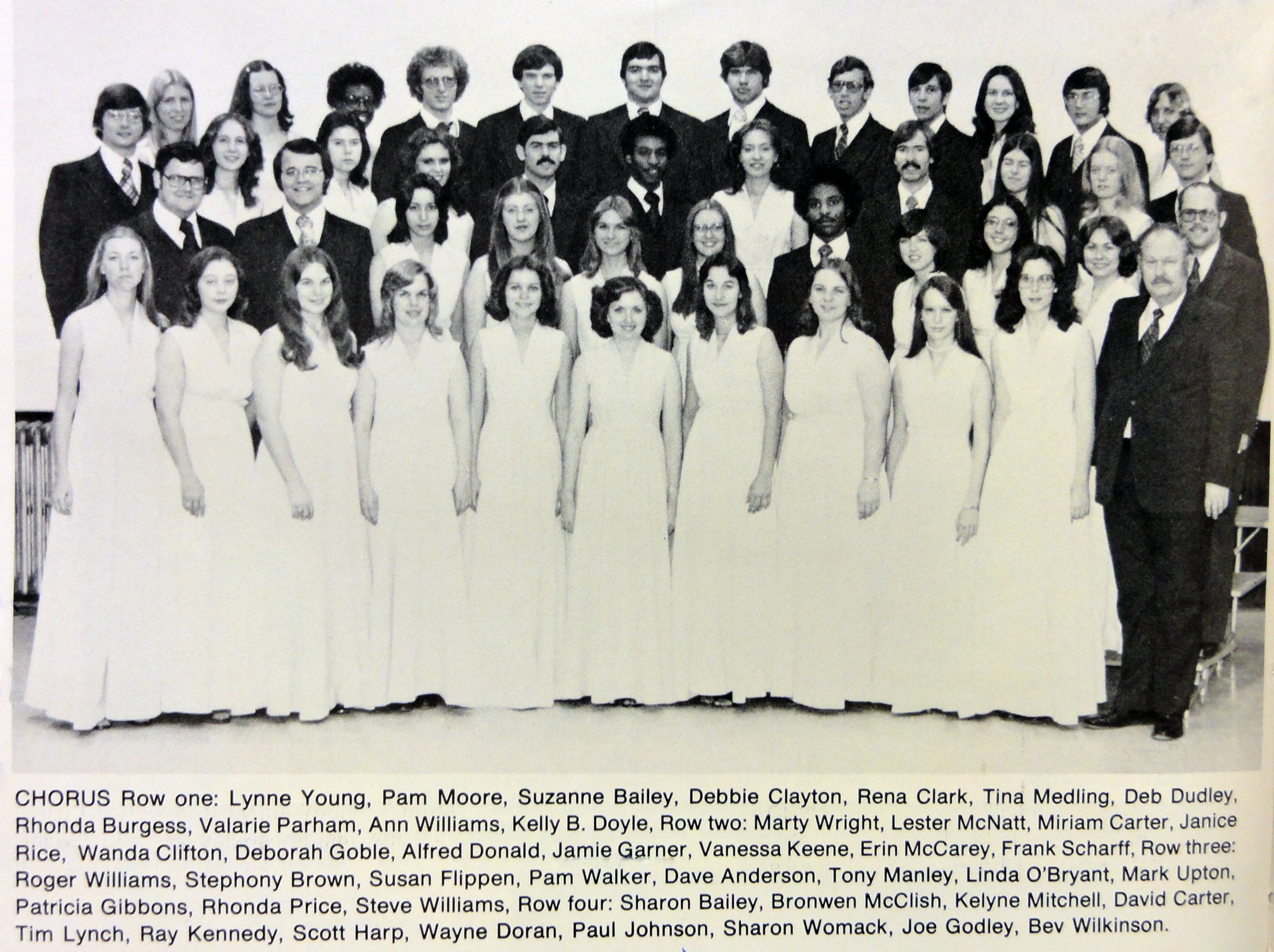 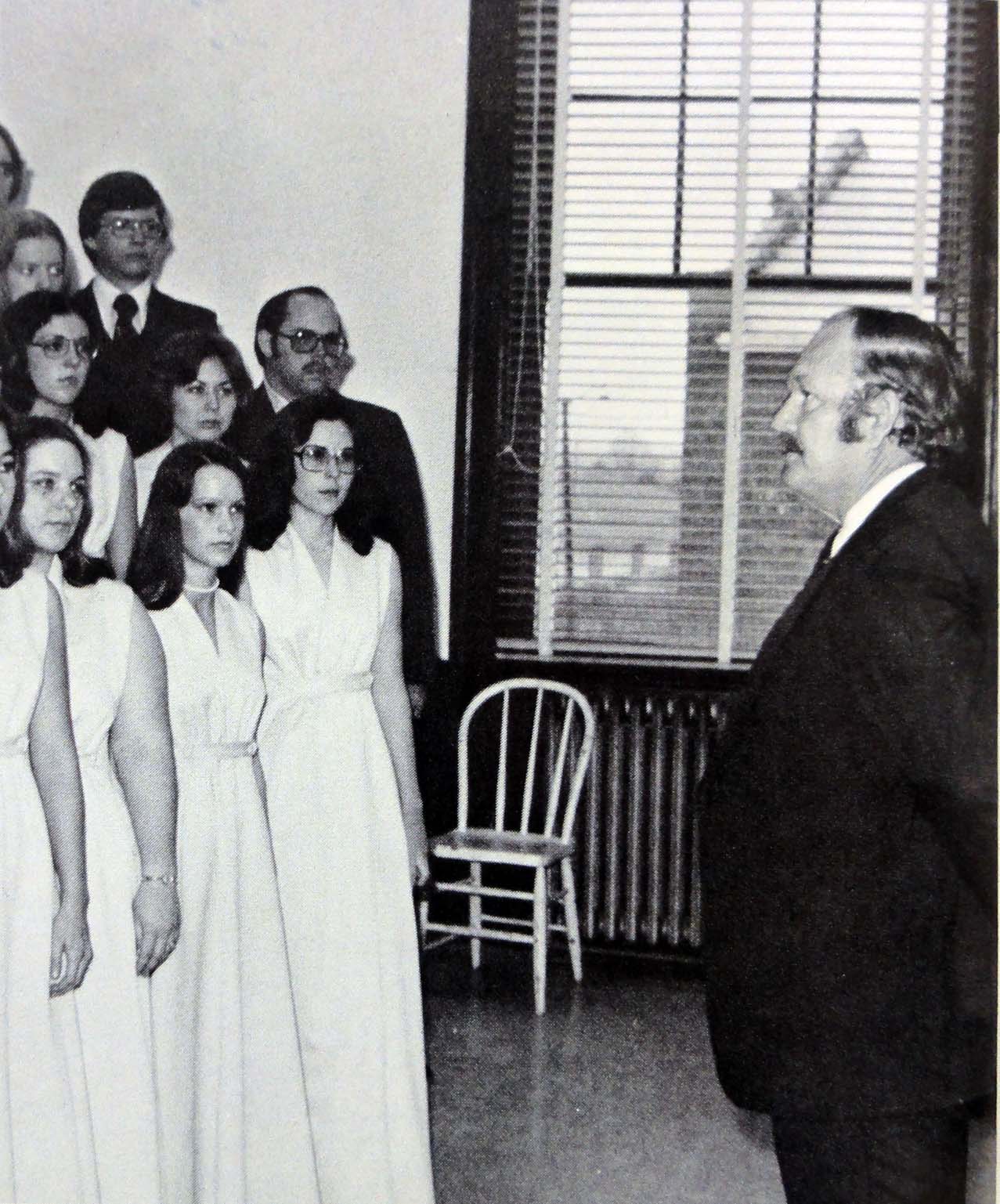 Directed By Kelley B. Doyle

-Web-Editor's Note in 2013: Special thanks to my friend Jon Galloway of East Kilbride, Scotland for preserving these songs and making them available here. Your webeditor had the honor of singing these songs while a member of Freed-Hardeman Chorus 1976,1977. On January 29,30, 1977, Freed-Hardeman College played host to the annual Christian College Choral Festival. Twelve Christian colleges were represented. William L. Dawson, nationally acclaimed song-writer and director from Tuskegee Institute, was the guest director of a very large gathering in Bader Gymnasium. He directed all the groups in the lower six songs above. The recordings above were made during the Freed-Hardeman College Lectures, held for the first time in the NEW Loyd Auditorium in February, 1977. One young man in the audience all those years ago was a high school student visiting the campus for the lecture series, Jon Galloway. He produced these recordings on reel to reel. It was 36 years later, while a missionary to Scotland, that alumnus of Freed-Hardeman University, Jon Galloway, made these recordings available to me, one of the participants in the chorus during that event, to be shared on this site. I didn't know Jon then, but imagine my surprise when I came to realize that a long ago, but certainly not forgotten, event in my life came flashing before my thankful eyes. Many thanks to Jon for helping bring to life an experience most of us thought was long gone, but certainly not forgotten.

Directions To The Grave of Kelley Bant Doyle

The Doyle family plot is in the Pisgah Cemetery, near Henderson, Tennessee. Heading north from Henderson head west on Sand Ave. Then turn right on Sanford Road. Go to the four-way stop and turn right on N. Pisgah Road. The cemetery will be on your right. Enter the cemetery and take the first left. Follow the road around toward the back of the section. The Doyle grave will be over toward the north edge of the cemetery. 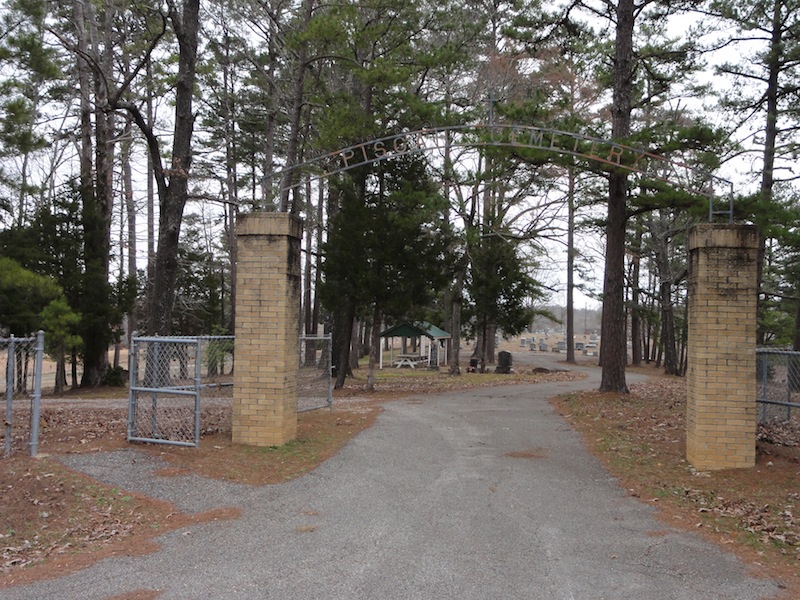 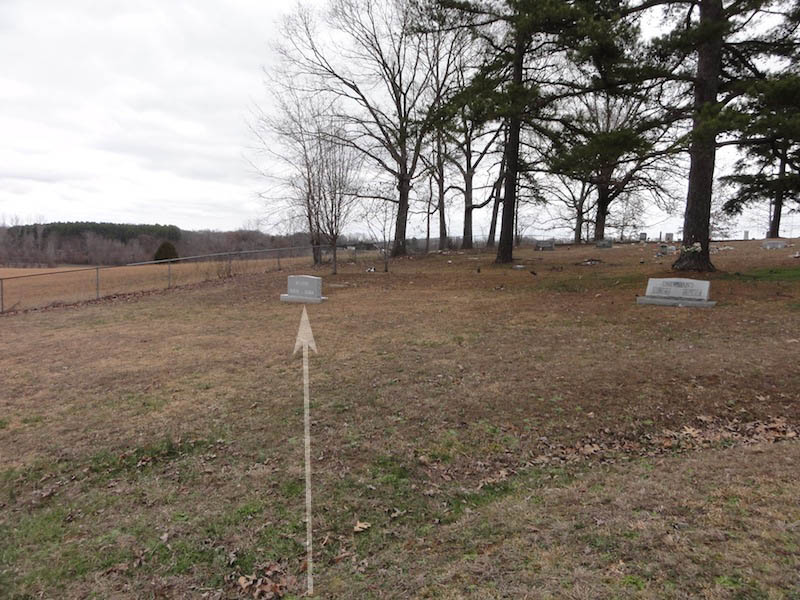 Doyle Plot On North Side Of Cemetery 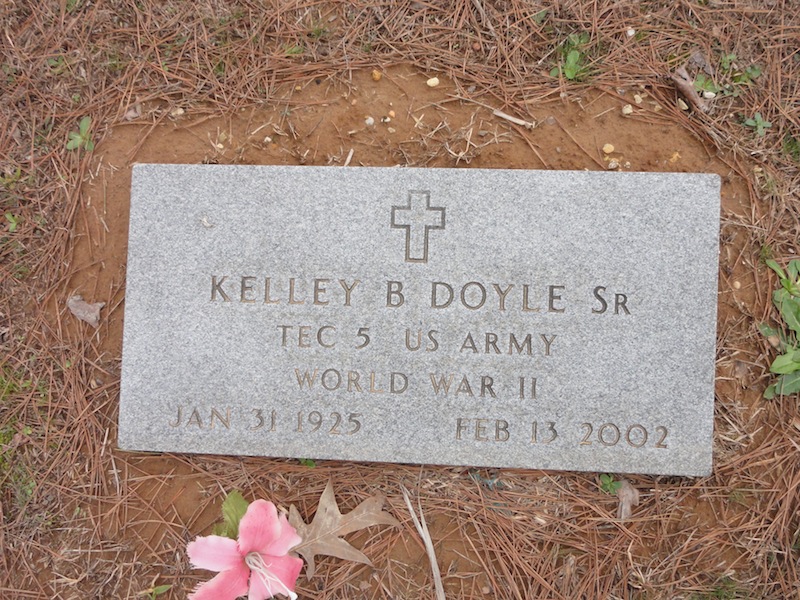 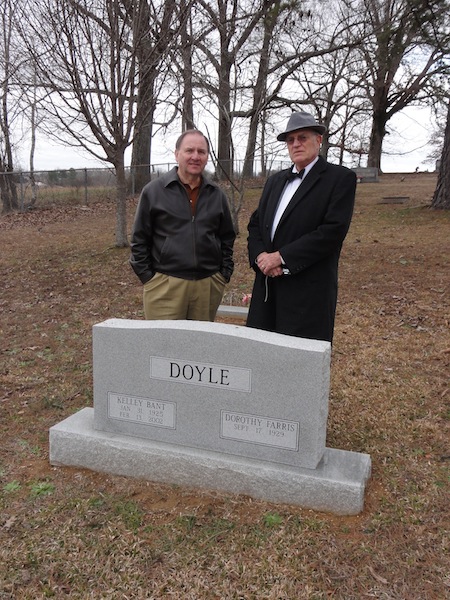 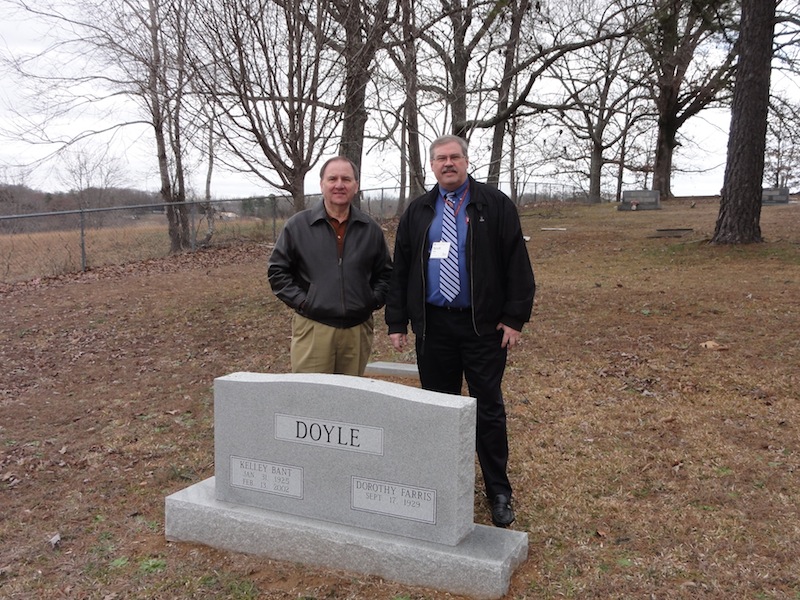