Be sure to read Long Range Results of One Decision by David Guthery on this page. David's parents are Avery and Katie Guthrie of McKenzie, TN. Katie's father, Tom Etheridge was Will Etheridge's brother. I knew these brothers. Will was born in 1872.

David's story about his great uncle was submitted to me by Frances Ann Johnson. Frances and her husband James Johnson are members of New Union Church of Christ near Manchester, TN where I have preached in four or five series of gospel meetings. James served as an elder of the Middleton (TN) Church of Christ 24 years. Frances is a granddaughter of Will Etheridge.

When my father, Raymond Overton was a young man he led singing in many gospel meetings where Will Etheridge did the preaching. I believe I heard my father speak of Will more than of any of the other preachers with whom he worked. He always spoke well of him. I am glad, as David's story says that Will decided "to take a seat and listen awhile" under that brush arbor!

A VISIT WITH ONE OF WILL'S CHILDREN

On January 20, 1992, my Margie and I visited May Etheridge Crawford at her home in Bolivar, TN. She is a daughter of Will Etheridge. She is 93 and very alert. She has been a widow for many years. Her four children are all living. Margie and I enjoyed our visit with her very much.

Will Etheridge and his first wife, Elizabeth Frazier Etheridge had six children. May and Winnie Scott are the only ones living. Winnie is the wife of Roy Scott. They live in Middleton, TN.

Brother Etheridge preached the gospel 55 years. After Elizabeth died he married Edna Stockard. She survived him an two other husbands, one of whom was my grandmother Overton's brother, Gether Sharp. Then Edna married Paul Tucker of Bradford, TN. Edna died last summer. Paul lives in Bradford. He recent gave me the picture of Will Etheridge which is reproduced on this page. (Webmaster note: This picture is reproduced at the top of this page.)

Will Baptized Her Despite The Shotgun!

I have just read your report in "The World Evangelist" on brother Will Etheridge and family. I enjoyed it so much that I just had to write you.

When I was a little boy growing up at Gilbertsville, Kentucky Will Etheridge came to Marshall County and preached in meetings several times. He was one of the favorites among the preachers who came there in those days. He was known by the members of the church at Gilbertsville as "Preacher Bill." Sometimes he would bring his daughters with him when he came to Gilbertsville. I don't remember their names. This is all about all I remember about him back then.

When I was a student in Freed-Hardeman Jr. College in the late 1940s brother Orbra Johns was preaching at Highland Street Church of Christ in Jackson, Tennessee. When he was out of town one Sunday the church sent to Freed-Hardeman for a preacher to fill in for him and I went. At the close of the morning service Will Etheridge came and spoke to me and asked where my home was. When I told him I grew up at Gilbertsville, Kentucky, the conversation started. He wanted to know if I was related to Earl, Ezra and Zen Hall. Brother Etheridge usually stayed at my uncle Earl's home when he came to Gilbertsville to preach. Earl, Ezra and Zen Hall and Wiley Howard were the elders at the Gilbertsville church when he was there. I told him I was the son of Zen Hall and he seemed very glad to see me and I was glad to see him.

Brother Etheridge invited me, my wife and two children home with him for the noon meal and we accepted. We talked all afternoon about old times. He told me about going to school at Johnson Bible College back before it went the way of the "Christian Church." He said he was invited back there to preach one time after it became a "Christian Church College." He preached on the principle of doing and teaching just what the New Testament taught and he told them that if they didn't believe it not to blame him for it, because that was what he was taught in Johnson Bible College and he still believed it.

There was a young man at brother Etheridge's home that afternoon who seemed to be one of his children and I said to brother Etheridge, "I thought all your children were girls," and he replied "He was a stranger and I took him in."

These things were very interesting to me and I thought you might enjoy them too.

We love you and your family and the work you are doing.

(Editor's note: My old friend Layton Hall wrote some very interesting church history in the above letter. (I added the heading above his letter.) He preaches for a very historical congregation, Philippi Church of Christ which has existed since 1833. The meeting house is on Hobson Pike, Hermitage, TN. Layton and I attended Freed-Hardeman at the same time. He has been a faithful preacher 49 years. He and his wife Lucile had a daughter that died many years ago. My Margie and I had a son that died. The Halls and we share a common hope of being with our departed and beloved children in the land where there will be no death.) - Basil Overton

The Power Of One Decision

My mother recently learned the story about how her family became Christians. Her uncle, William "Will" Etheridge, left home as a teenager and went to work in a small town. Seeking social excitement, he bought season tickets to the local dance hall.

As he was walking to the first dance, he came by a brush arbor where a gospel meeting was in progress. It was too early for the dance and the preacher sounded interesting, so he decided to take a seat and listen awhile. He had never heard preaching like this before. He was very impressed with the Bible truths presented and decided to become a Christian that night. He tore up his tickets to the dance and made his life-long commitment to Christ.

He went back to his home near Paris, Tennessee, and converted his father, step mother, brother, sisters, half brothers and sisters. This occurred around the year 1890. Through his influence, over 100 of his family's descendants have become Christians.

But this is not the end of his story. Will Etheridge then went on to Bible College and became a gospel preacher. He preached for about 50 years in several states and held gospel meetings in many places including Springfield, Missouri.

We never know how the future of our world can change because of our deciding today, either to serve God or to fulfill our worldly desires.

(Editor's note: I truly appreciate David's story about Will Etheridge. When I was growing up in Weakley County in West Tennessee, I knew my father, Raymond Overton (now deceased) had been greatly influenced by Will Etheridge. Dad led singing nany times in gospel meetings where Will preached. Dad spoke of brother Etheridge very often. He loved and respected him greatly. It was also my pleasure to know this gospel preacher. Because he influenced my Dad for good I believe he influenced me for good.)

A Will Etheridge Story

In the December, 1997 issue of the World Evangelist, Basil Overton, under his regular heading of Mule Musings, told of a story he had heard Will Etheridge tell over 50 years previous. He spoke of a woman went to a judge and told him her husband hitched her with a mule to a plow. The judge told her, "I don't blame you for wanting a divorce." She replied, "Judge, I don't want a divorce, I want you to make my husband get a mule that will pull his part." He went on to illustrate that this was like a mule, or for that matter a Christian who would not pull their part in doing the Lord's Work. Mule Musings was always a good story from farm life with an any day and anytime practical example for Christians anywhere and any time.

-World Evangelist, December, 1997, page 8, under Mule Musings And Other Matters

My Will Etheridge Connection

Will Etheridge touched the lives of many individuals. He being dead, still speaks through his descendants. It has been my privilege to know some of his family, working with them in the church. When I was preaching for the church of Christ at Fayetteville, Georgia, between 1996 and 2006, it was privilege to know and work with Dennis and Marlene Etheridge and their family. Though they had spent most of their lives in Ohio, for the last number of years they have lived in the metro-Atlanta area. Dennis is one of the deacons in the Fayetteville church of Christ. It was my privilege to marry some of their children, and teach the gospel to some of them and their mates as well. They have become to Jenny and myself life-long friends. -Scott Harp

Directions To The Grave Of W.F. Etheridge

W.F. Etheridge was buried in the graveyard at Middleton, Hardeman County, Tennessee.

From Memphis: On the east side of Memphis take I-40 to Exit 10 (I-240) and head south. Go seven miles and head SE on Hwy 385 (Nonconnah Pkwy.) Go to dead end into Hwy. 72 and head east out of the metro Memphis area. Stay on Hwy. 72 into Mississippi until you get to the community of Walnut. Then head north out of Walnut on Hwy. 15. Head into Middleton and the cemetery will be on your right. Enter the central part of the cemetery and look for a marble squared in area with tiny gravel. This is the grave location of the Etheridge family.

From Nashville: Head west on I-40 to Jackson, Tn., Exit #80 and head south (45 Bypass). Head into the city and bear right on Hwy. 45 heading south toward Henderson. Just south of the city, take Hwy. 18 southwest toward Boliver. At Boliver head due south on Hwy. 125 to Middleton. When passing through Middleton you will see the cemetery on your left. Enter the central part of the cemetery and look for a marble squared in area with tiny gravel. This is the grave location of the Etheridge family.

From Birmingham: Head northwest on Hwy. 78 into Mississippi. After passing through Tupelo you will come to New Albany. Head north on Hwy. 15. When you cross into Tennessee it will become Hwy. 125. Head into Middleton and the cemetery will be on your right. Enter the central part of the cemetery and look for a marble squared in area with tiny gravel. This is the grave location of the Etheridge family. 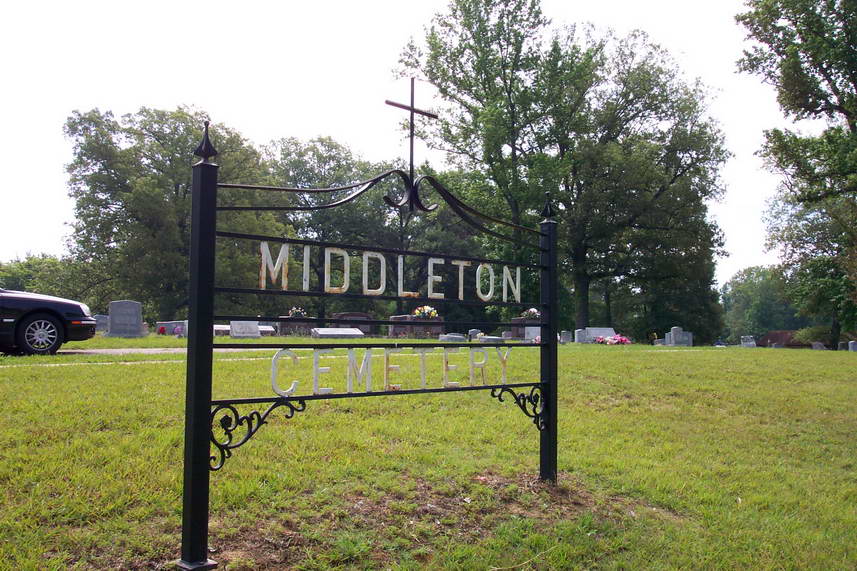 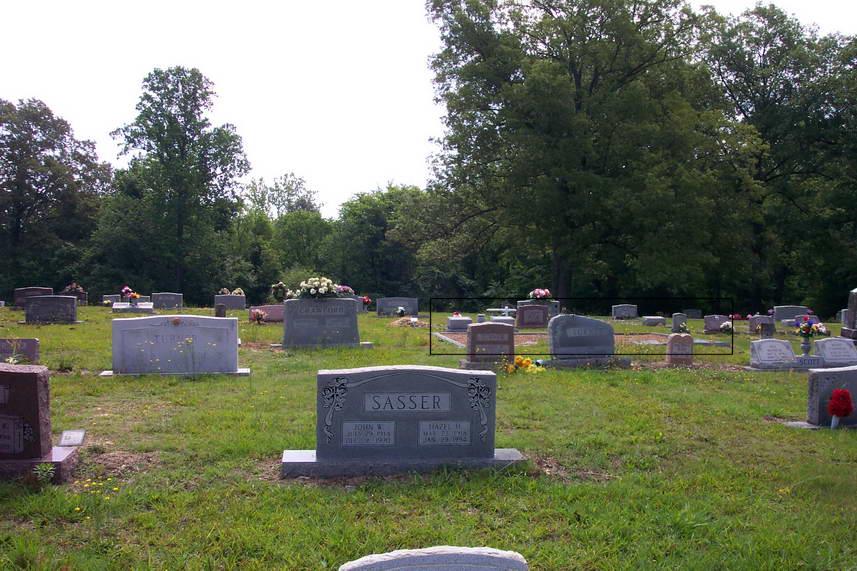 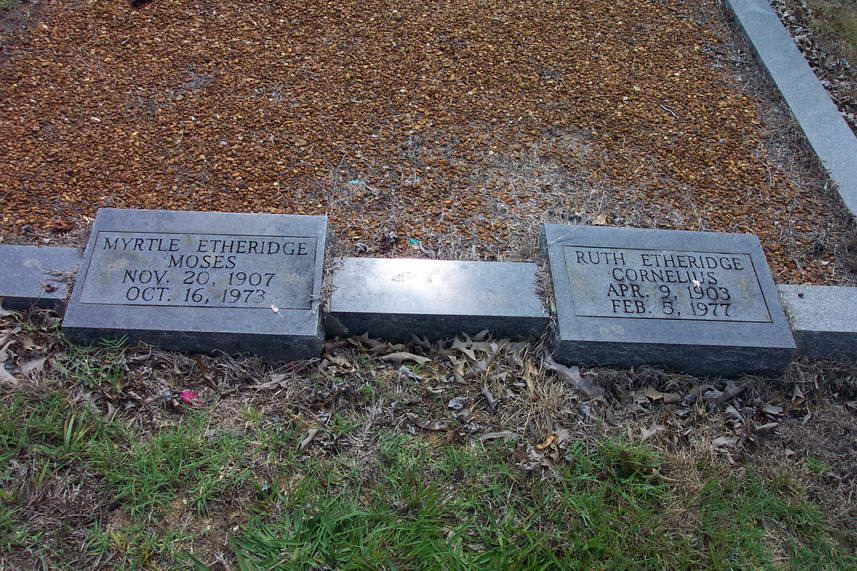 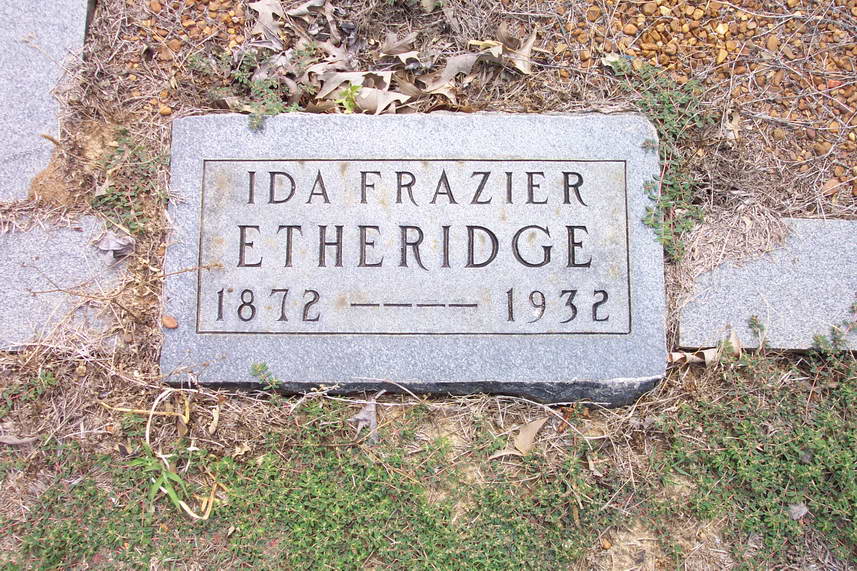 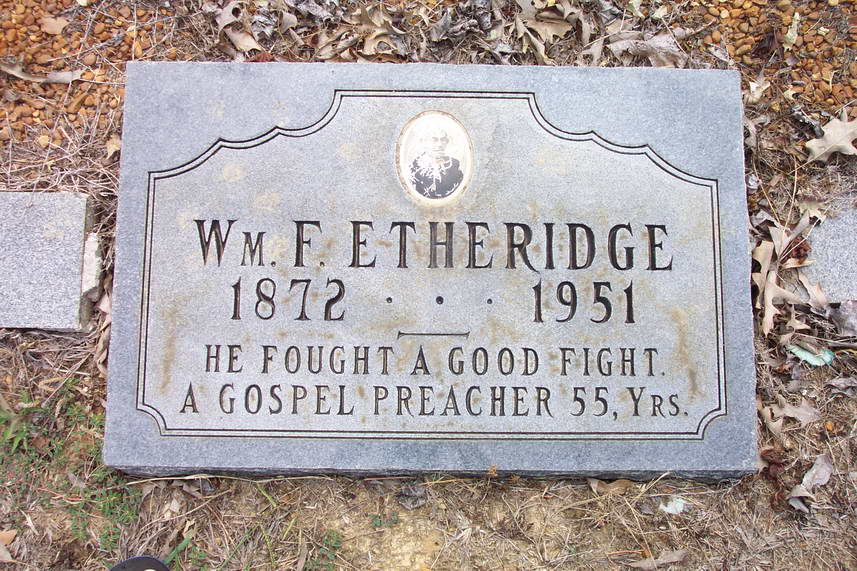 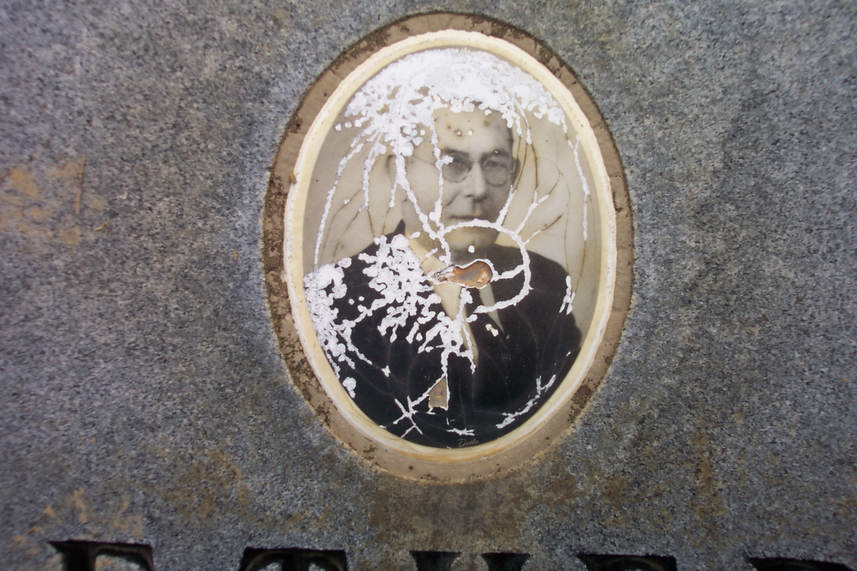 Special Thanks: To Tom Childers for assisting me in bringing to light and helping me to locate and visit the grave of W.F. Etheridge. I visited the grave in June, 2007 will involved in a series of meetings at Austin's Chapel Church of Christ in Scott's Hill, Tennessee.