Biographical Sketch On The Life Of Charlotte Fall Fanning

Greatness can be defined as using one's talents, abilities, and opportunities to the fullest possible extent. By this standard, as well as many others, Charlotte Fanning must be regarded as one of the greatest women in the Restoration Movement in the 19th century.

Her grave marker in Mt. Olivet Cemetery, in Nashville, Tennessee, is a silent, but powerful reminder of her life and work. Even today, she lives on, influencing the lives of some young women pursuing a Christian education.

Charlotte Fall was born near London, England, April 10, 1809, the youngest of ten children. Her father settled in Logan County, Kentucky in an attempt to restore the family fortune. Tragically, Charlotte's mother died shortly after they arrived and even more tragically, her father did not live much longer.

On his deathbed, he gave the care of the family to his oldest son, Philip. Philip Fall, who became one of the best known and best loved preachers in the south, proved a great influence on Charlotte (15). Trained as a teacher, he took upon himself to tutor his sister. As a result, she gained a fine classical education and followed him in the teaching profession. She learned five languages, Hebrew, Greek, Latin, German, and French.

After Philip moved the family to Nashville, Tennessee, Charlotte met a young widower named Tolbert Fanning (Scobey 115). Fanning's first wife, Sarah Shreve of Nicholasville. Kentucky, had died a few months earlier. They married the first of January, 1837. The union of Tolbert and Charlotte Fanning not only joined them in marriage but also in a life-long commitment to provide quality Christian education to young people.

Almost immediately after their marriage the couple moved to Franklin, Tennessee, to open a girls' school. This school, which lasted three years, was named The Eclectic Institute for Young Ladies (Young 39). This school met with remarkable success, starting with 60 students and soon growing to 100 (Wilburn 42). Tolbert Fanning used his spare time in preaching and evangelism.

In 1840, the Fannings purchased a farm of over 300 acres, about five miles southeast of Nashville. They soon established a school for girls which again met with great success (Scobey 150-51 ).

Two years later, Tolbert Fanning began a school for boys. Agriculture, which was always close to Fanning's heart, was the focus of this school. Each boy was required to spend part of the day working on the farm. The success, though mixed, of this school led Fanning to expand it to college level. He received a charter from the state in 1843 and began the school the next year, calling it Franklin College.

A new building for the school was finished in 1845. It could house 200 students. It also provided recitation rooms, a chapel, and two society rooms (16). Charlotte Fanning continued her school for girls as part of Franklin College. She taught in a room attached to the Fannings' home.

Franklin College closed in 1861, with the beginning of the War Between the States. The Union army. which occupied Nashville, brought much suffering to Tolbert and Charlotte. Because Tolbert's conscience would not allow him to take a oath of loyalty to the Union, the army burned their home. At times, they were almost reduced to starvation, surviving only because of the generosity of friends.

The main building of Franklin College survived the war and school re-opened in the fall of 1865. However, a student accidentally set the building afire just a few months later, burning it to the ground.

With an indomitable spirit. Tolbert and Charlotte Fanning bought the building of Minerva College, next to the destroyed college building. Here they opened a girls' school they called Hope Institute. Charlotte Fanning flourished at Hope Institute: "In all the years of her busy, useful life, Mrs. Fanning was never busier ... Mr. Fanning had many 'irons in the fire,' and Mrs. Fanning assisted in the handling of the irons" (Murphy np).

CHARLOTTE FANNING AS A TEACHER

Charlotte Fanning became known as a teacher who was deeply devoted to the welfare of her students (Scobey 147). From the beginning of the school at Elm Crag, her school room was more than a place of instruction. It came to be known as "Aunt Charlotte's Room." Each evening at twilight, the students gathered for a time of devotion and fellowship. After the Bible study and prayer, Charlotte would provide an apple or other fruit for the students. Sometimes she would play the guitar and they would sing together. She also took time to tutor the more advanced students (Scobey 155).

Though both boys and girls were at Franklin college, they were strictly segregated, with the exception of morning chapel, and evening singing time. They were also allowed to be together at the church services. One former student remembered another small exception. At times, Charlotte Fanning would arrange prudent and discreet little meetings between boy and girl students she considered worthy (Scobey 172).

THE CHARACTER OF CHARLOTTE FANNING

Mrs. Fannings's life was characterized by kindness and benevolence. Few of the sick and needy of the neighborhood missed her attention. She regularly visited homes in the neighborhood, bringing encouragement and cheer to the ill.

She was generous to a fault, giving away anything and everything to the needy. After her first stroke, she was found to have practically no clothing at all. She had recently given all her necessary garments to a poor black woman.

Emma Page described her life, as "full, to overflowing, of energy, patience, firmness, gentleness, temperance, meekness and other traits and graces that adorn a woman's character" (27). At Charlotte's death, her neighbors helped create a permanent monument to her kindness. 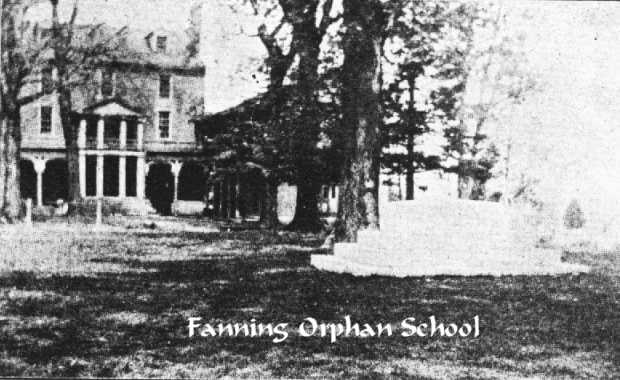 Tolbert Fanning died tragically, (sic) April 15, 1874. [Editor's Note: He died May 3, 1874. He was injured on April 15] With the help of friends, Charlotte Fanning finished the term of Hope Institute but then closed the school. There were no commencement exercises.

She was largely idle for the next ten years. Her intention, after Tolbert's death, was for Elm Crag to be used in educating orphan girls after she died. However, she decided instead to deed it to a board of trustees to begin a school as soon as possible. She gave approximately 160 acres, with the buildings, to a group of 13 men, among whom was David Lipscomb.

Her gift was conditioned upon the trustees raising an amount of money equal to the property. This they did and used the funds to repair the school building, buy livestock, and build new farm buildings.

When this was done, Charlotte Fanning then deeded the rest of Elm Crag, 160 acres, to the trustees. She asked only to be allowed to use two rooms for the rest of her life.

The school prospered and a new building was finished in 1904. In 1905, 80 girls were enrolled. This was primarily a school for orphan girls, those with at least one parent deceased. These were provided education at no cost. Churches often would send qualified girls to the school.

Keeping with the Fannings' philosophy, each girl did some work around the house each day. Each had an assignment which rotated regularly (Scobey 389).

Charlotte Fanning was active in the school in various ways. She worked closely with the superintendent in the early years and was always available for counsel. She taught Bible in the school as long as her health permitted.

Charlotte Fanning suffered a stroke December 18, 1895, which ended her active life. Though bedfast for almost a year, she never lacked attention. Friends and students cared for her, taking the place of the children she never had.

During this period, she often requested the Bible be read to her. One of her favorite passages was Psalms 86:1-6. When the reader came to the words, "I am holy," she would point to herself and shake her head.

Charlotte Fanning died August 15, 1896. She requested to be buried in front of the school building and that her grave be made so the girls could play on it. Tolbert Fanning's body was moved to lie beside her, and her wishes were carried out. When the property of Fanning Orphan School was sold to the Nashville Airport Authority in 1943, their bodies were moved to Mt. Olivet Cemetery, to rest with other worthy leaders of the Restoration Movement.

Perhaps the inscription on her gravestone well sums up her life:

CHARLOTTE FANNING Born on April 10, 1808; died on August 15, 1896 She spent her life in training girls for usefulness and doing good to the poor and needy. She founded a school in which girls would daily be taught the Bible and trained in domestic and useful callings of life. "I was sick and you visited me." By her neighbors.

The first labor of her life with this noble woman was to engage in doing good for the young by teaching and training them for the proper discharge of the duties of life; the last thing was to leave all she and her husband had saved for the perpetuation of that good. The influence of a life so consecrated to the good of mankind does not lose it's power because one may die. It flows on and on, with it may be, not so intensive a force, but with ever-broadening waves, toward the shores of eternity.

The work of Tolbert and Charlotte Fanning lives on today. The proceeds of the sale of the property of Fanning Orphan School were put in trust. Today, the Fanning Foundation still provides scholarships to Christian schools for young women who have lost one or both parents. Today, in addition to past contributions, Charlotte Fanning "...being dead, yet speaks" (Heb. 11:4).

Wilburn, James R. The Hazard of the Die, Tolbert Fanning and the Restoration Movement. Austin: Sweet, 1969.

Young, M. Norvel. A History of Colleges Established and Controlled by Members of the Churches of Christ. Kansas City: The Old Paths Book Club, 1949.

Special Thanks - This article appeared in the 2003 Freed-Hardeman Lectureship in Henderson, Tennessee. Ancil Jenkins researched, authored this text, and presented an overview of Charlotte Fall Fanning's life in a lecture during the February forum at F-HU. Jenkins is a church historian, and has recently submitted articles to the Gospel Advocate on touring the sites of the Restoration Movement. He has also authored a book on the life and work of A.G. Freed. We use the above article with his permission, and extend to him our gratitude for helping to bring the remembrance of this great Christian woman to light.