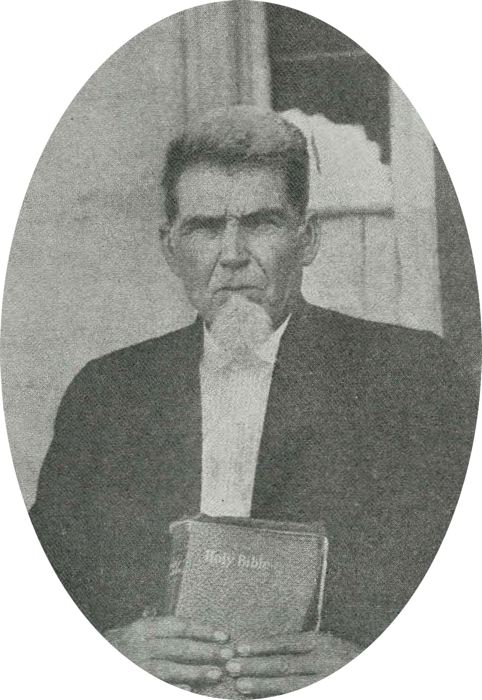 The Life Of Marion Harris

The subject of this sketch is another one of those tireless and fearless lovers of the truth who was contented to live and labor in obscurity for the good that he could do. Marion Harris was born in Jackson County, Tennessee, September 1, 1848. He was the son of William Harris. He lived all his life in his native county and did most of his preaching in that county. Marion Harris was reared on the farm and lived on the farm all his life. He was a farmer and merchant. He was an honest toiler and practiced economy, so that he accumulated enough to live and preach the gospel. No man in Jackson County had greater influence for righteousness and good citizenship than did Marion Harris. He served two terms, or twelve years, as magistrate of his county. During this time he was elected chairman of the County Court and served his county in this capacity for five years. The county was in debt when he became chairman of the County Court, and he so managed affairs that before his term expired the county was out of debt and had money in the treasury. He said that this was the hardest place that he ever tried to fill and succeed in keeping himself "unspotted from the world."

Brother Harris obeyed the gospel when he was twenty-two years old, being baptized by William Kuykendall. He began to take public part in the worship of the church soon after he became a Christian. He was made an elder of the congregation at Sugar Creek, in Jackson County, and continued to serve in this capacity until God called him home. During the first ten years of his public work as an elder and preacher he operated a large farm and worked in the timber business. He found time to hold a number of meetings and preach many funerals during this time. He preached almost every Saturday night and Sunday, riding horseback to his appointments and returning to continue his work on the farm. Most of his preaching was done in destitute places, where he usually succeeded in building up the congregation. His first meeting was held at Brimstone Creek, in Clay County, Tennessee, where he had a number of additions and established a church. At another time he was called to White's Chapel, or White's Store, on Jennings Creek, in Jackson County. He had been invited there by two sisters. This was a Presbyterian community. He held his meeting in September and baptized thirty-two persons. The greater number of these came from the Presbyterian Church. He continued to preach there and held six protracted meetings there and baptized nearly a hundred people.

In 1900 he held a tent meeting near Chestnut Grove, in Jackson County. He preached ten days, but had no visible results. This was a Methodist community. He went back there the next fall and preached in an old log house which stood near the Methodist church house. It rained the first service of this meeting, and the house was not sufficient to keep his audience sheltered. While they were singing the first song and before he preached, two members of the Methodist Church came and offered him the use of their house. He baptized eight during this meeting. He continued to preach in that community until he established a church.

Brother Harris also preached much in Overton County. In one of the rural sections of that county the Baptists, with the help of others who were not members of any church, built a church house. It was built of logs, and after it was completed the question arose as to who should preach the first sermon in the house. The Baptists could not agree among themselves, and a man who had worked for Brother Harris and had moved into that community suggested as a compromise that they get Marion Harris. The man could give no further recommendation of him than that he was "a good man." Brother Harris received the invitation and went. They were pleased with his preaching and invited him back. He continued to preach there and held a meeting in the church house of one week's duration, and had more than thirty additions. He continued to preach there for several years and held six protracted meetings for them. The Baptist denomination never did get to claim the house which was built as a Baptist church house. A few months after he had held a meeting there he went back into the community to preach one Sunday. As he was going from the church house on Sunday morning after services, he met one of the men whom he had baptized a few months before, with a gun on his shoulder and some squirrels. Brother Harris stopped and said to him: "What does this mean?" The man replied: "There 'is nothing to that religion that you are teaching, and I gave it up." Brother Harris said to him: "Sam, there is nothing to you. If you had been fully converted, I would not have caught you in this shape. You would have been at church today." The rebuke was sufficient to cause the man to go back to the church.

Brother Harris extended his field of labor into Clay County. He went to Clemmonsville in that county at the invitation of a friend. There was no congregation there and only three members of the church. He continued to preach at this place for nine or ten years and established a good congregation there, having baptized one hundred and thirty people. Many of these came from the different denominations. At another time and place he was preaching in a community that was largely Presbyterian in religious complexion. He was baptizing people daily, and in the midst of one of his sermons a stanch Presbyterian member arose and said: "We will not stand for this any longer. You are tearing up what our forefathers taught more than fifty years ago. I say this must be stopped now." He was not permitted to finish the sermon, and the crowd left the house and went into a grove. He had a larger crowd from that time on than he would have had if he had remained in the Presbyterian house.

Brother Harris filled a place that no other man could fill in his county. He preached the gospel in simplicity and earnestness to a rural folk. He went into places where no other preacher had gone and established congregations. He was able to preach without being supported by any church. He received very little for his forty years' preaching. He wanted nothing for his work, because he did not need it. He preached for the love of souls and to glorify God. He died on September 1, 1927. He died on his seventy-ninth birthday. He was buried near his old home in Jackson County. Services were held by the lamented M. L. Moore.

Brother Marion Harris was born on September 1, 1848, in Jackson County, Tennessee. On December 14, 1869, he was married to Miss Susan Denton, who, with their five daughters, survives. On the third Lord's day in October, 1870, he was born from above, and, being baptized by William Kuykendall, because a member of the church of Christ, to which he remained true to the day of his death-September 1, 1927. Seventy-nine full years wee call the measure of his earthly life. Eternity alone can tell the real measure of a life so close to the Lord as was that of Brother Harris.

During the last two weeks of his life I was in a meeting with the Sugar Creek congregation, of which he had been an elder for many years. So long as he was able to take an interest in anything, our meeting was on his heart. He gave me one of the sweetest welcomes the day I arrived for a meeting. I often visited him, and he renewed the request he had before made that I make the talk at his funeral, and often said that I must not leave him. During our meeting there one year ago we celebrated his birthday with a service at the meeting, on which occasion he made one of the sweetest and best talks I have ever heard.

On Thursday, September 1, the day he was seventy-nine years old, in the presence of a very large concourse of brethren, sisters, and friends, his body was placed in the Denton burying ground to await the glorious resurrection morn, when he shall be called to come forth in the likeness of our Lord and Christ, whom he loved and served. The writer read some Scriptures, led in prayer, made a short talk, and read a few lines from "Gleanings front the Field," some written by Brother Harris and some by Brother Willie Hunter, who brought out the book.

May the Lord bless Sister Harris, who meant so much to him, and his dear children and grandchildren, on whom he ever doted.

We shall meet again "some sweet day."

Directions To The Grave Of Marion Harris

Marion Harris is buried in Jackson County, Tennessee in the old Allen Cemetery between the towns of Gainsboro and Celina. Take Hwy 53 north of Gainesboro toward Celina. The address on the highway will be 2809 North Grundy Quarles Hwy. (Hwy 53), Gainesboro, Tennessee. If you get to the Sugar Creek Community, you have passed it. Go to GPS location below.

Special Thanks to Wayne Kilpatrick for helping to find the grave of Marion Harris and providing the photos you see on this site. 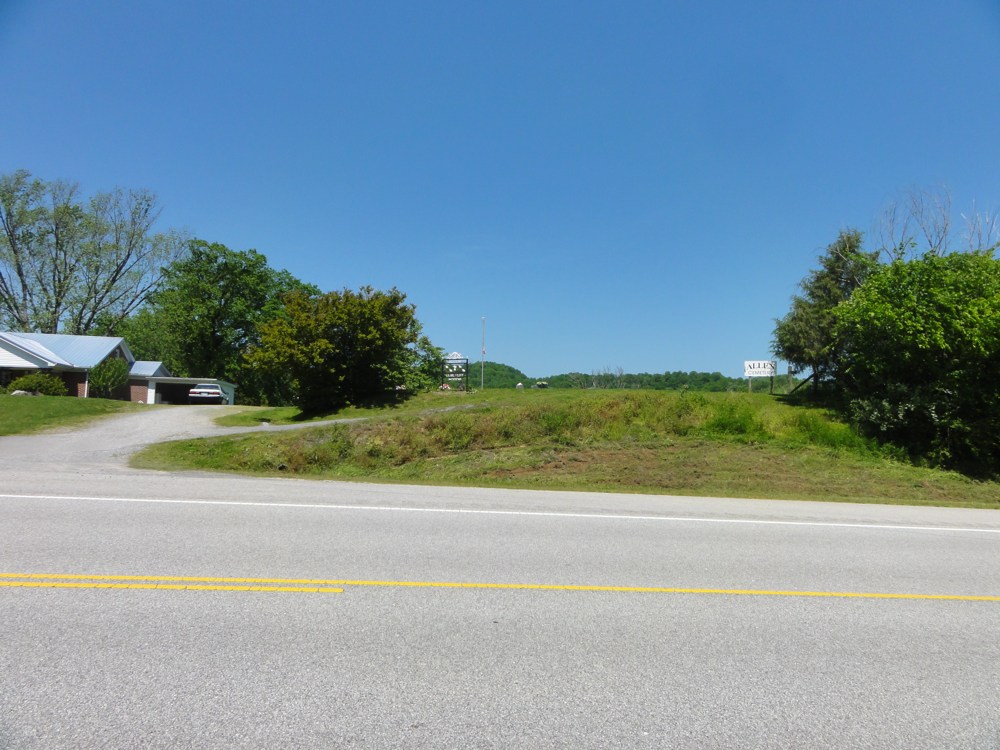 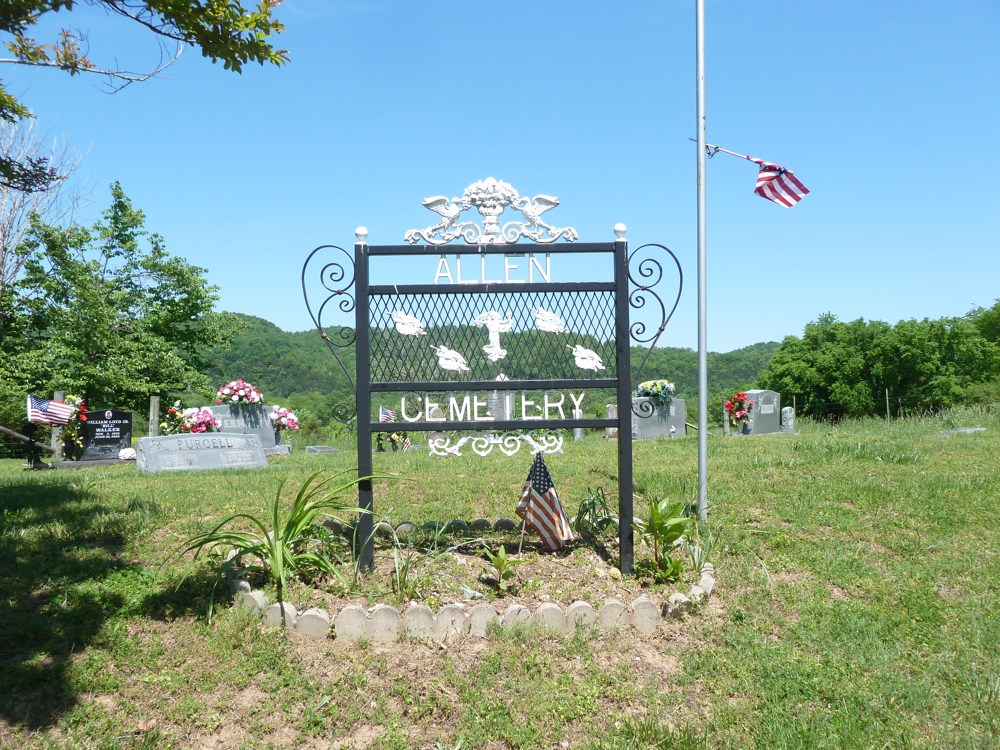 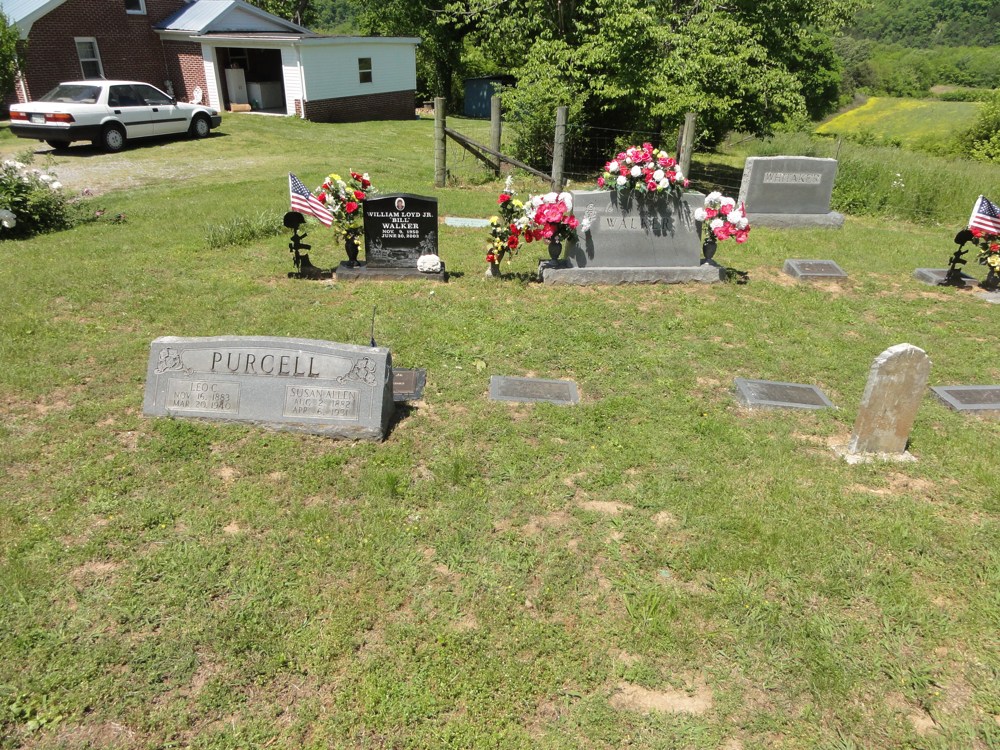 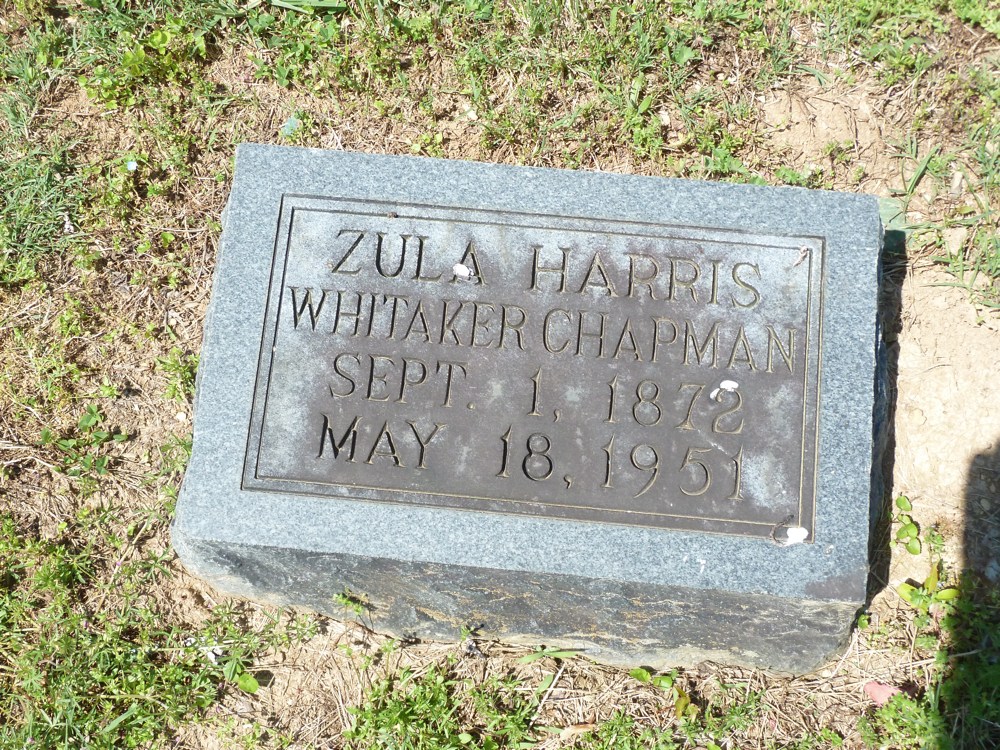 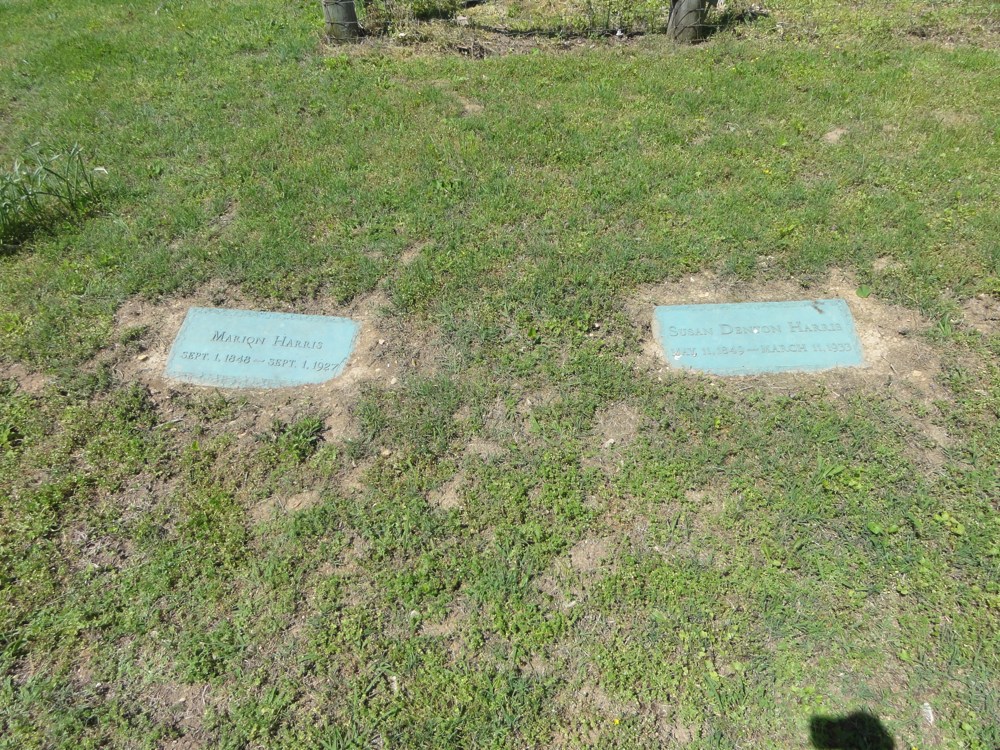 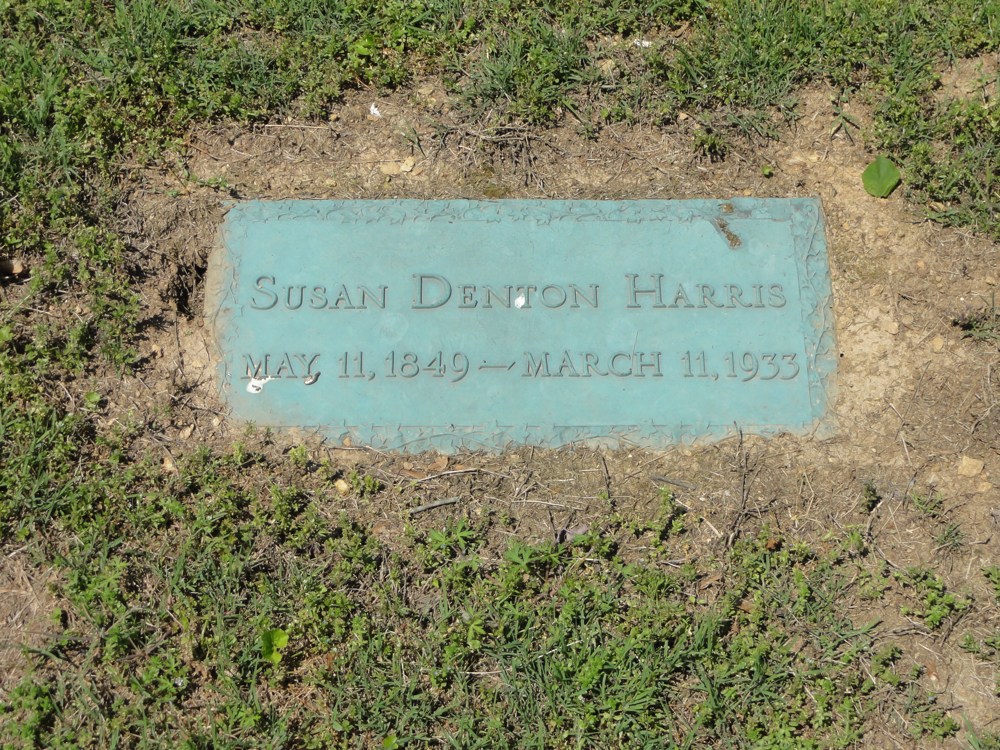 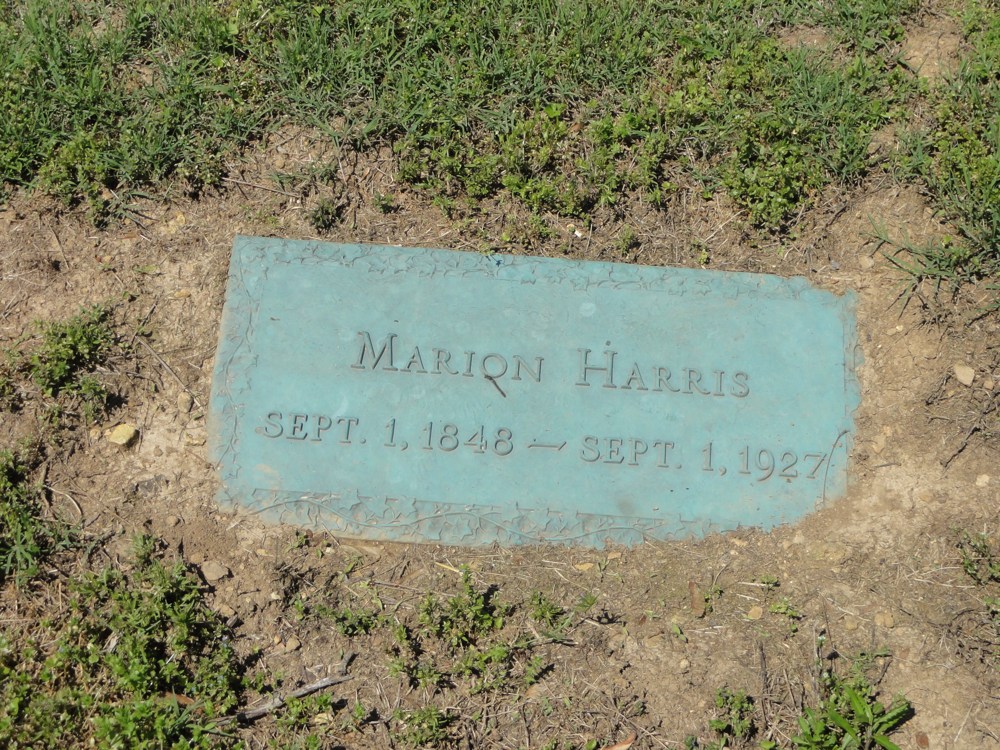