WINTHROP HARTLY HOPSON was born in Christian County, Kentucky, April 26, 1823. His father, Dr. SAMUEL HOPSON, was born in Culpepper County, Virginia; his mother, SALLIE CLARK, daughter of Captain JOHN CLARK, deceased, of Calloway County, Missouri, was born in Hopkinsville, Kentucky. His grandfather, Colonel JOSEPH HOPSON, was an officer in the Revolution, under General DANIEL MORGAN. His mother's grandfather, HENRY CLARK, was a patriot brigadier-general of North Carolina in the Revolution of '76.

At an unusually early age the subject of this sketch learned to read and write. He went to the common school of his father's neighborhood until he was eight years of age, when he was sent to Bonne Femme Academy, in the adjoining county of Boone. He commenced at once the study of Latin. With occasional intermissions, he was at school, from home, nine consecutive sessions of ten months.

Portions of 1836 and 1837, he was at school in Jacksonville, Illinois. While there, he boarded in the family of that great reformer, preacher, and eminent Christian, B. W. STONE. Under his preaching, the evening of the first Lord's day in August, 1837, in Jacksonville, the Doctor made the good confession, and, the next day, was immersed in a stream near by.

His father had him educated for the law, and the Hon. EDWARD BATES, of St. Louis, had agreed to take him into his office as a pupil; but, feeling it to be his duty to preach the Gospel, in 1839, at his home in Fulton, Calloway County, Missouri, he delivered his first public exhortation to sinners. This effort was a decided success, and, from that time, he continued to exhort at all the protracted meetings he attended, until, in 1842, at Millersburg, Missouri, he was regularly set apart to the ministry.

On the 30th of April, 1844, he was married, in Gasconade, Missouri, to Miss REBECCA GRISWOLD PARSONS, and, in the following February, his father died. Having now a wife and widowed mother to support, and receiving a very small salary for preaching the first seven years of his ministry yielding not over fifty dollars per year he decided to commence the study of medicine, with the hope that he could the better support his family, and, at the same time, preach the gospel. Accordingly, in the winter of 1846, he attended his first course of medical lectures in St. Louis, and, the next spring, began the practice of medicine in his own neighborhood, in Osage County, within a mile of the Gasconade line.

In April, 1847, his wife died, young in years, but rich in faith and good works. He now moved to Fayette, Howard County, and preached for the Church, at the same time practicing his profession. In the winter of 1847 and 1848, he completed the course in the Medical Department of Missouri University, in St. Louis, and received the degree of M. D. The subsequent March, he was married to Miss CAROLINE HENLY GRAY, of Fulton, Missouri. She died, September 20, 1849, in the triumphs of the Christian faith. He now abandoned the practice of medicine forever, and gave himself entirely to the ministry of the Word.

In September, 1850, he was married to Mrs. ELLA LORD CHAPPELL, his present wife. The next month, at the State Meeting in Fayette, he was requested to act as Evangelist, and in December he commenced his work.

For seven years, he taught a successful female school at Palmyra. He spent the year 1858 traveling in Missouri, Illinois, and Kentucky. In January, 1859, he held a remarkable protracted meeting in Cincinnati. For six weeks the interest was unparalleled, and about ninety were added to the Church. In December, he took charge of the Church at Lexington, Kentucky, which position he held until April, 1862, when he entered upon the work of an Evangelist. He is now located in Richmond, Virginia, where his labors are highly appreciated, and his success very encouraging. 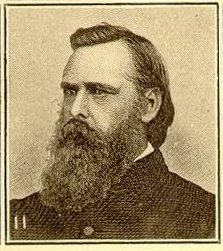 Dr. HOPSON is six feet one inch and a half high, very erect, and weighs about two hundred and ten pounds. He has excellent health, and never tires in preaching the Gospel. He is one of the ablest preachers among the Disciples. But he is a speaker, not a writer; a reasoner, rather than exhorter; a good pastor, but better Evangelist. He is more than an average scholar, and his general reading is quite extensive, though he is often careless in the selection of choice words. He aims to be understood, and, in the possession of a happy communicative talent, he has no peer. No one who listens can fail to comprehend him. Even in a Greek criticism, he makes every thing plain to the people. Though remarkably dignified and courtly in his bearing, he is, nevertheless, a people's man. They feel that they can understand him. In his advocacy of the truth, he is bold, belligerent, and fearless. He carries the war right into Africa; consequently, the sects do not love him. But he is very popular with both the preachers and churches of his own brethren. He is especially kind to young preachers, and always helps them in whatever way he can. In money matters, he is liberal to a fault, and never turns a deaf ear to the poor and needy.

Back To Hopson Main