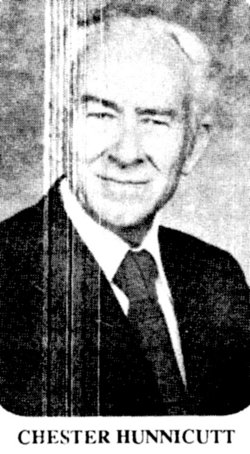 When Chester Hunnicutt left home at age 17 to go to Burritt College at Spencer, Tennessee, he had enough money to get fare to ride a train to Birmingham, Alabama. He stopped to visit an aunt here and a cousin told him he did not have enough money left for his train ticket to Doyle, Tennessee near Spencer. He borrowed three dollars and a suit of clothes from his cousin, and went on to Doyle. When he got off the train at Doyle he found that the only way up the mountain was to pay the mail carrier a small amount and ride up with him in a truck. After paying for fares he arrived on the campus with 13 cents, borrowed clothes, and did not know one person there.

He had promised his mother he would write to her as soon as he arrived. He bought a tablet for five cents, a pack of envelopes for five cents, and a two cent stamp, and wrote to his mother. He used his last penny to buy a box of matches to light the kerosene lamp in his room. He lighted from that a piece of paper to light a fie in the coal grate for heat when needed. Do children have it easy now?!

Chester was born October 27, 1905 in Tuscaloosa County, at Wiley, Alabama.

Before attending Burritt College, Chester attended a school at Berry, Alabama called Alabama Christian College. He was baptized into Christ (Galatians 3:37) at Berry at age 13. Gus Nichols had him to do his first act in public worship. He read the second chapter of James.

Chester paid his own way in school by being a barber. He was able to get the job as college barber while attending Lipscomb three years. He shaved, cut hair, gave shampoos, tonics and all the works at that time. One of his friends who was an artist, made a sign for the bulletin board Let Hunni Cutt Your hair. He was remembered years later by the children and grandchildren of his friends because of the sign.

Chester preached his first sermon a the small building which is still used in Spencer, Tennessee when he was 17 years old. He quoted Matthew 5 6 , and 7, I believe. He preached one of his very last sermons there in August 1978 (maybe last one) while attending the annual Burritt College Reunion.

Chester spent a few months living at Central Church of Christ in Nashville, Tennessee preaching to transients and working in a cafeteria there. His first full time preaching was at Tracy City, Tennessee following John D. Cox.

He moved from Tracy City to Tullahoma, Tennessee about 1932. In March 1937 he and I were married. Before our marriage I was Thelma Ruth Jenkins of Lenoir City, Tennessee.

We were instrumental in establishing the church in Spartanburg, South Carolina: 2nd in Tryon, North Carolina. In 1952 we moved to Apopka, Florida to enroll Richard in the Bible school at Mt. Dora. We then moved to Killen, Alabama. Richard enrolled at Mars Hill Bible School in Florence, and attended five years, graduating from high school in 1959. Our younger son Samuel started first grade at Mars Hill in 1955 and attended five years. During this time Chester was active in school affairs at Mars Hill. We moved across the river to work with Annapolis Ave. Church of Christ in Sheffield, AL, in 1959 and staved until March 1960. Chester went to Cherokee, North Carolina to build a house for us at that time.

We had spent one month in Cherokee in 1959 starting a mission work among the Cherokee Indians. Chester baptized John Harlane, as for as is known, the first Cherokee Indian to be baptized on the reservation in North Carolina. In June, Sammy and I joined him there. Richard was at David Lipscomb College then. We spent seven years at Cherokee with this church, during the time we were responsible for raising the money to build the church building and preacher's home on the reservation. Chester also raised money to buy several buses to be wed in the work. A lot of hard work was involved, but work we never regretted doing.

In 1966 we left the Cherokee in work to enroll our son Sammy in Alabama Christian High School; in Montgomery, Alabama. We still had property in Cherokee, so when Sammy finished high school and Chester had had a light stroke we returned to Cherokee. He just assisted the man who was preaching there after that time.

After eight more years, in 1974 we moved to Beersheba Springs, Tennessee, staying only one year.

In July 1975 we moved to Montgomery, Alabama to Alabama Christian College where Chester gave his time to do whatever he could for the college. He died at the end of four years in Montgomery, July 26, 1979. His body was buried in Gardens of Memory in McMinnville, Tennessee July 28, 1979.

(Editor's note: I am pleased to publish the foregoing about an old friend. I asked Thelma to write this story about her husband. In 1963, my Margie, our four children and I worked a week with Chester and Thelma and others in a Campaign for Christ in Cherokee, North Carolina. We visited each day in the mountains with the humble Cherokee people, and I preached each evening at Soco Valley Church of Christ, a congregation of Cherokee Christians. I had a great admiration for Chester Hunnicutt because of his love, devotion, and patience in working so much to save his people. He was part Cherokee, and loved all people. I am confident in hope that he is enjoying the reward of his trust in the Lord and his labor of love in that eternal land.)

On Thursday, July 26,1979, the earthly phase of the life of Brother Chester A. Hunnicutt ended. It was the will of God that death, as an angel of mercy, relieved him of the burden of illness and infIrmity and gave him rest. But our hearts are saddened and our spirits impoverished because of his departure.

Brother Hunnicutt rendered outstanding service to the church as a preacher and teacher. He knew God's Word. He was willing and able to preach and teach it. He had the wisdom to apply it to life. His advice and counsel were invaluable. He loved the church. It gave him pleasure and spiritual joy to attend its services. His worship strengthened his faith, deepened his love, and increased his hope of life everlasting.

Brother Hunnicutt was interested in the salvation of his fellowmen. He not only preached and taught, but he encouraged and supported others to preach the gospel and teach the lost. He was an enthusiastic and liberal supporter of Christian education and especially Alabama Christian College. He was a kind and sympathetic friend, liberal and charitable.

He was a good husband, father, and grandfather. Doubtless, his children and his children's children shall rise up to call him blessed. Brother Hunnicutt, who served as a deacon, will be sorely missed by College Church.

A memorial fund has been set up in his honor at Alabama Christian College. Brother Hunnicutt loved young people and wanted very much to see a pavilion built in Hunnicutt Park located on the campus of A.C.C. The pavilion will cost $50,000. Already some $1860 has been given or pledged to this memorial. You can have a part in helping to fulfill his dream by sending your contribution to Hunnicutt Memorial Pavilion, Alabama Christian College, Montgomery, Alabama.

As well as any person we have known, the late Chester A. Hunnicutt fit Luke's description of Barnabas, For he was a good man .... (Acts 11:24.)

Perhaps one of the most ignored scriptures in the New Testament is Acts 20:35. Brother Hunnicutt believed it with all of his heart, and practiced it until the day he died. Yes, he truly believed, as Christ said, It is more blessed to give than to receive.

This writer had the privilege of knowing Chester for 40 years. He was a great inspiration. He taught me, by example, the happiness and personal, spiritual and physical profit caused by liberal giving.

When I first met brother Hunnicutt, he was doing mission work in the Carolinas. He was making $25 a week. He always gave 25 percent or more to the church, Christian education and other worthy spiritual causes.

Although frugal in his living, he was a gifted business man, and as he said, Jimmy, the more I give, the more I prosper. The Lord has been good to me and I want to be good to him.

Chester was a Bible scholar. He studied daily and knew it well. He knew he could not outgive God, but he tried as hard as any. man I have ever known.

He was born October 27, 1905 in the small community of Wiley, Tuscaloosa County, Alabama.

He left this earth July 26,1979. He was buried in McMinnville, Tennessee, Willard Collins and this writer officiating.

He attended school at Burritt College, Spencer, Tennessee, in 1923 at age 17 and began preaching that Fall. He later attended David Lipscomb where he graduated in 1930.

His first local work was at Tracy City, Tennessee, and his last was at Cherokee, North Carolina, where he spent 15 years establishing a congregation among the Cherokee Indians, of whom he was blood kin. He started this work in 1959.

Chester held meetings in 13 states, with most of them being in Tennessee, around the McMinnville area. In one of his many successful meetings, he baptized 56.

Although he had frjends throughout the southeast, no doubt he wanted to be buried at McMinnville because of the great work for the Lord he had done in that area.

He was a great believer in Christian education. He made it a habit to attend all the lectureships at David Lipscomb, Freed-Hardeman and Alabama Christian. For years, he never missed.

He also supported these institutions financially, particularly Alabama Christian, where he and his lovely wife, Thelma, went in 1966 to supervise the men's dormitory and yield whatever influence they could to help the boys and girls become good Christians.

It has often been said that behind every goodman there is a good woman. Certainly, this was true in Chester's case as his wife, who survives him, was always at his side. She was a devoted wife, and helped him with all of his problems and opportunities. He is also survived by two sons, Richard of Florence, Alabama, and Samuel, Nashville, as well as brothers and sisters and two grandchildren, Amy and David.

Directions To The Grave of C.A. Hunnicutt

Chester A. Hunnicutt is buried in the Gardens Of Memory Cemetery. Smartt is just west of McMinnville, Tennessee on Hwy. 55. (Manchester Hwy.). On I-24 between Murfreesboro and Chattanooga, take Exit 111, Hwy. 55, and head east. Travel about 15 to 18 miles, and the cemetery will be on your right. 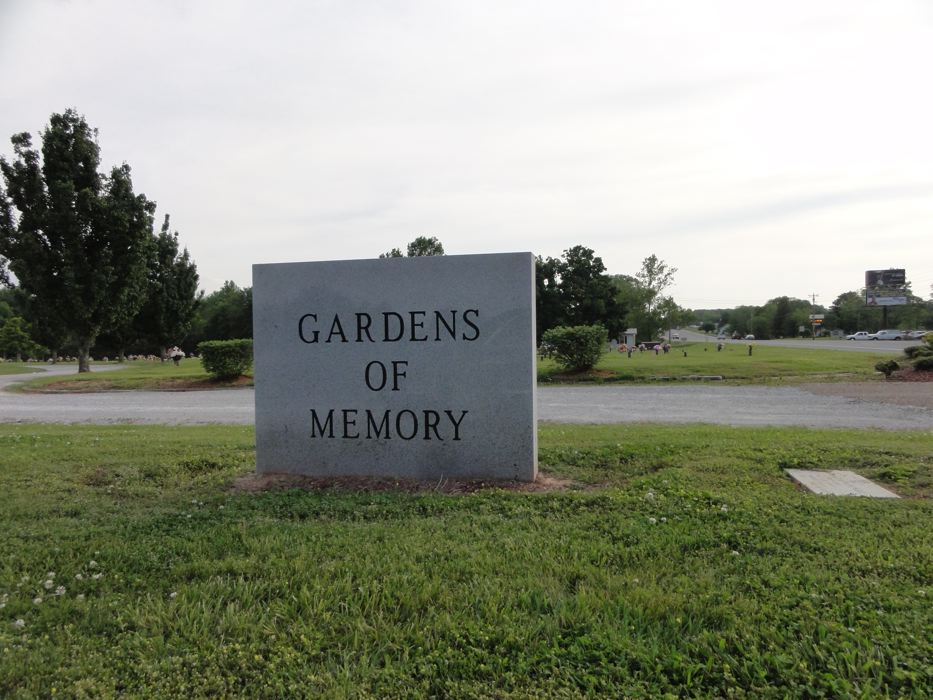 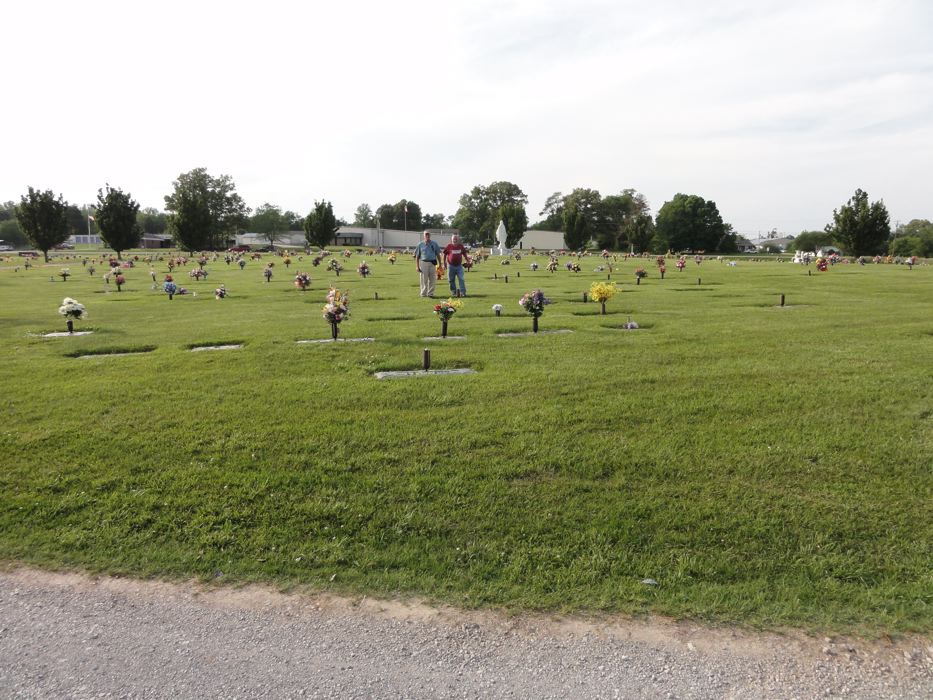 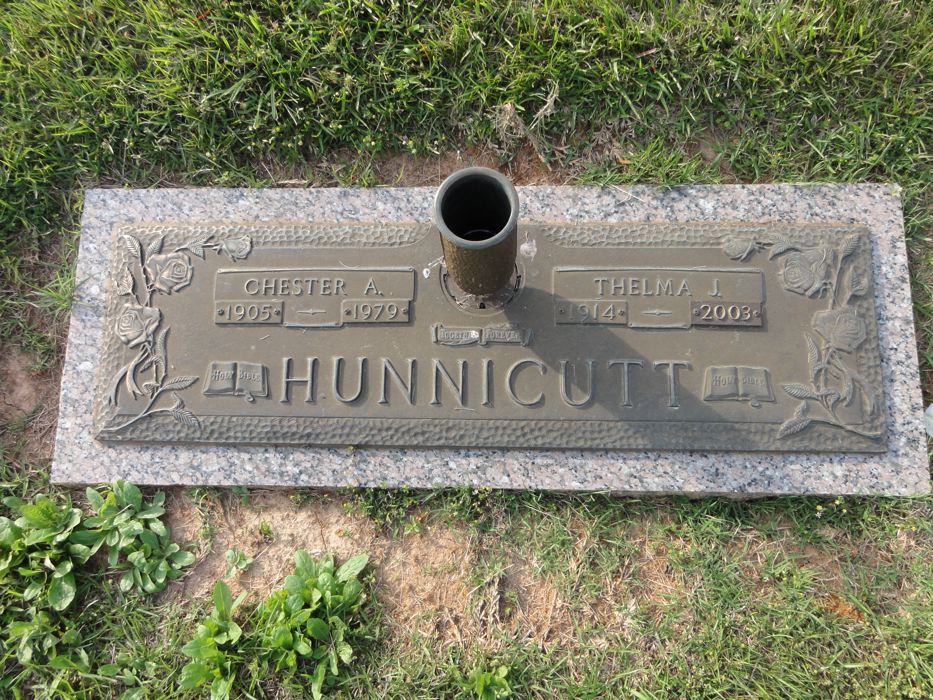