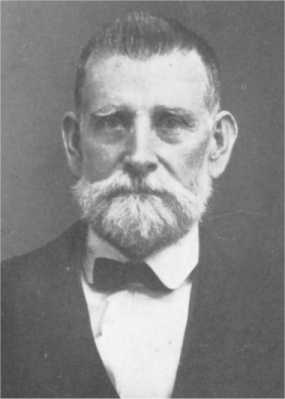 In the progress of human affairs, God works in manifold ways. When there is a need for a leader or defender of his cause, one is raised up. When the descendants of Abraham in Egypt needed a leader to deliver them from the bondage of Egypt, God gave to them Moses. When they needed one to lead them across the Jordan and fight their battles in the land of Canaan, he gave them Joshua. When His people needed a king to succeed Saul, the son of Kish, he gave them David. When they needed a prophet and priest who would be faithful to Jehovah, they were given Samuel. When they needed prophets and teachers, God gave to them Isaiah, Jeremiah, and Daniel. When the time was ripe and the world needed a Savior, God gave his only begotten Son. When a certain portion of Middle Tennessee needed a man of God to contend earnestly for the faith and preach the gospel as God's power to save, God gave to it E. A. Land.

E. A. Land was born in Hickman County, Tennessee, March 28, 1827. Little is known of his forbears. He grew to manhood in his native county and suffered the hardships incident to that country. He was born in poverty and reared with very meager means of livelihood. There were no advantages for an education in that county at that time. Young Land read such books as he could borrow. Neither he nor his people had money enough to buy books. Few men have been reared with such scant means and so few opportunities as was E. A. Land.

On June 6, 1844, Brother Land was married to Nancy Barber. He was only seventeen years old when he married, and his wife was only fourteen years and eight months old. He assumed the responsibilities of a husband early in life and shouldered the burdens of a husband and father before he grew out of his " eens." Young Land and his child wife began married life without any money and without any property. Perhaps no other couple ever began housekeeping with fewer material things than did this couple. Brother Land leased a small tract of land and cleared it of all the timber the winter after he married. His young wife helped him in the forest during the daytime and ran the spinning wheel at night to make the garments for both of them to wear. She was skillful with the spinning wheel and the loom so she spun and wove all the cloth that was needed for their clothes. Both husband and wife were industrious and economical. They had no time for idleness and no worldly goods or money to squander. They learned the valuable lessons of honest toil and frugal living. In after years Brother Land looked back on these days with pleasure, for he had learned well the lesson of sacrifice and service.

It seems that Brother Land and wife gave but little attention to the spiritual side of their nature at first. They had but little preaching and had not studied the Bible much. In the providence of God old Brother R. B. Trimble passed through Hickman County and preached the gospel. He was called by the ignorant and prejudiced people "a Campbellite preacher." Young Land and wife did not know what this meant. They had never heard of such a preacher before, and through mere curiosity they heard R. B. Trimble preach one sermon. They did not know enough about the Bible to know whether he was preaching the truth or not, and they were not very much concerned about that. Later they heard it talked that this "Campbellite preacher" belonged to the "New Lights." This was as new to them as was the preacher. The next year old Brother Johnston went into Hickman County and began preaching in the neighborhood where young Land lived. Brother Johnston was preaching on Beaver Dam Creek, in Hickman County. Here E. A. Land and wife heard him, became interested, and before the meeting closed both were baptized into Christ. From that time henceforth E. A. Land not only became a humble follower of Christ, but a courageous defender of the faith.

Brother Land worked with his brother-in-law in a wood shop the following year after he became a Christian. He and his brother-in-law were congenial companions and were successful with their new enterprise. At the close of the year they made an inventory of their year's work and found that they had cleared twenty-one dollars above their living and expenses. This was considered a profitable business. Brother Land made the proposition to purchase his brother-in-law's interest in the shop. The trade was made, and Brother Land continued his enterprise for a few years, "making good" at his work. Later he bought a small tract of land and ran a shop together with his farm, and made a very comfortable living.

Brother Land began an earnest, prayerful study of the Bible soon after he became a Christian. There were few preachers in that county of any kind, and there were none who preached the simple gospel as revealed in the New Testament. Brother Land felt that he should do all that he could for Christ, since Jesus had died for him. He soon began to take an active part in the little congregation at Beaver Dam. It was not long until his zeal for Christ and his knowledge of his truth were recognized and his services in great demand. He developed into a strong gospel preacher. The prejudice of the denominations was high against him. The religious complexion of his community was strongly Baptist. The Baptist Church had a strong foothold in Hickman County. Their strongest preacher was Elder S. F. Casey. He was of the Primitive Baptist faith and a strong debater for that country. He challenged Brother Land for a discussion. Brother Land feared no man and was well armed with the truth. They met in debate in 1886, at Ænon, in Perry County. This debate was a success for the church at that place. He had another debate with a Baptist preacher named "Park."

In July, 1880, he had a debate with W. H. Bailey, a Presbyterian preacher, at Mount Carmel, in Benton County. Mr. Bailey claimed to be a Greek scholar and challenged Brother Land for a debate. Brother Land agreed to meet him on the one condition that he confine his arguments to the English language. Mr. Bailey accepted this agreement and signed propositions for an eight-days' debate. When the time arrived for the debate to be given, Mr. Bailey asked Mr. Park, the Baptist preacher with whom Brother Land had debated, if Land was a good debater. He asked: "What ability has Land as a debater?" Mr. Park smiled and said to Mr. Bailey: "I do not know whether you know anything about farming, but I do know that you are going to tackle the hardest piece of land (Land) you ever undertook." The debate began with a very large crowd. It was estimated that there were eight hundred people present the first day. On the third day, at the noon hour, Mr. Bailey said to Brother Land: "Do you see that farmhouse across the field yonder? I am going over on my horse to get a hot cup of coffee." Mr. Bailey rode away, and he never returned to continue his part of the debate. They had agreed to continue the debate eight days and had now engaged in the debate only two and one-half days. This was another great triumph for the truth.

In November, 1880, Brother Land made a trip to Arkansas, riding horseback. He held meetings at Russellville and Chickalah. He also held a meeting at Bluffton. The meeting at Bluffton resulted in twenty-five additions to the church. There were only ten members of the church at Bluffton when he went there, and he left a good working congregation of thirty-five members. He wrote of them as follows: "They are generous and kind-hearted brethren and sisters and ministered to my needs in temporal things quite liberally. To the Lord be all the praise." Brother Land's preaching was confined in the most part to Hickman, Perry, Wayne, Lewis, Humphreys, Benton, Lawrence, Hardin, and Maury Counties, in Tennessee. He preached some in Mississippi, Kentucky, and Alabama. His travels were all on horseback. He baptized many hundreds of people and encouraged the churches much in those counties where he preached. He labored in word and doctrine with R. B. Trimble and F. N. Davis. Brother Land was a logician. He did not know formal logic, as he had never studied a textbook on logic. However, he knew how to reason logically, and had no mercy on the errors of denominationalism. He had bitter enemies among those who were prejudiced against the New Testament church. It was said of him that he never feared man or the devil. He fought many a battle alone, and the churches throughout those counties still feel the influence of the life of this man of God.

He died at Hohenwald. Tenn. April 7. 1916, at the age eighty-eight years and nine days. He was buried at his old home on Brush Creek, in Perry County. At his request, Brother H. N. Mann, of Riverside, Tenn., conducted the funeral services and gave exhortation to his brethren and sisters to live faithful to the Lord. Those counties in Tennessee have never known a better or greater man than E. A. Land.

Location Of The Grave Of E.A. Land

Near the west-central city of Linden, Tennessee is the grave of E.A. Land. At the crossroads of Hwy. 412 and Hwy. 13, travel north on Hwy. 13 3.9 mile. As you come over a hill you will turn right (this is a hard right heading southeast) onto Lower Brush Creek Road. You will cross the creek and the road will be somewhat curvy. It will become Upper Brush Creek Road. You will pass a little cemetery on the right, but from the highway it is exactly 3.4 miles and you will turn left up a hill on a gravel road. Go 1/10th of a mile and the graveyard is on your left. Look for a small spire shaped grave that is in the center of the little cemetery. It is slightly taller than all the other graves in the cemetery.