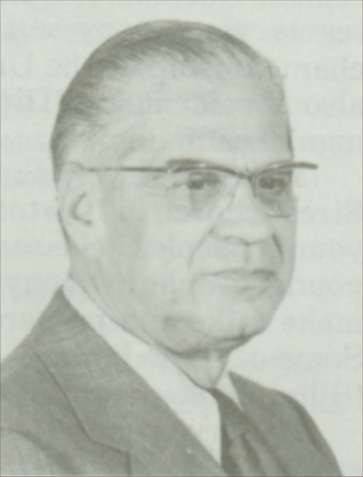 Biographical Sketch On The Life Of Lester Campbell Massey

Lester Campbell Massey was born January 11, 1907, at Chattanooga, Tennessee. He was the son of Kelley and Frances Floy (Campbell) Massey.

His early training was in the public schools of Tennessee. He graduated as Valedictorian of the Central High School Class of 1925 in Chattanooga. Following his high school work he attended Edmondson Business College.

In 1926 Massey married Miss Nora Clements. To this union two sons and one daughter were born. The sons were named Lester Campbell, Jr., and George C. The daughter was named Patricia.

On July 3, 1973, he married Mrs. Jean B. Blackwell. At the time of their marriage, Mrs. Blackwell had one son and one daughter. The son was Roger Lee Blackwell and the daughter was Mrs. Anita Faye Inman. No children were born to Lester and Jean.

L. C. Massey was baptized by Paul Buchanan in November, 1932 at the age of 25, and began preaching at the age of 30 in 1937. At first he preached for small congregations in the Chattanooga Valley area. He preached his first sermon at Hooker, Georgia in 1938. He served the Woodland Heights, Chattanooga, Tennessee congregation from 1945-1946. He served the church in Palmer, Tennessee from 1947-1950. Then he was at Soddy from 1950-1955. He worked with Sale Creek, Tennessee from 1956-1960. He then did full time local work with the Northside Church of Christ in Chattanooga, Tennessee. He preached at smaller congregations in Grundy, Sequatchie County, Tennessee, and Ringgold, Georgia; Pikeville, Tennessee; and throughout the Chattanooga area while holding a full time job with Crane Company in Chattanooga for 38 years. He wrote many articles which were published in church publications, including the Gospel Advocate. He wrote "The Conquest of Canaan" in 1977.

Massey served as an elder of the Eastdale Church of Christ. He also served on the Board of Directors for the Boyd-Buchanan School. He taught for a number of years in the Deaf School of Preaching. For this worthy work his time was donated.

He died May 28, 1981, at his home in Chattanooga, Tennessee. He was survived by his wife, Jean B.; two sons, Lester C., Jr., and George C.; one daughter, Mrs. Patricia Roy; one step-son, Roger L. Blackwell; and one step-daughter, Mrs. Anita Inman; two brothers, Kelley E. Massey and James Massey. He was preceded in death by one brother, Winston Massey.

Directions To The Grave Of Lester C. Massey

Lester Campbell Massey is buried in the beautiful Hamilton Memorial Gardens Cemetery in north Chattanooga, Tennessee. From I-75 take Exit 4 Hwy. 153 - Chickamauga Dam/Airport Exit and go north 8.6 miles. (Note: You will cross the Chickamauga Dam) In September, 2003 when I visited the grave there was a Big K-mart and Ford Dealership across the four-lane highway from the cemetery. Turn left at the first entrance of the cemetery and proceed to the first intersection. You will take your first right. Go up the hill and look for the section on you left with an "A" framed mausoleum on the top of the hill. The section immediately in front of it is called The Garden Of Everlasting Life. You should see the sign on the corner. Continue on another 50 feet and go into the section toward the mausoleum only a couple rows. You should see the Massey plot there in Lot 362 #1. 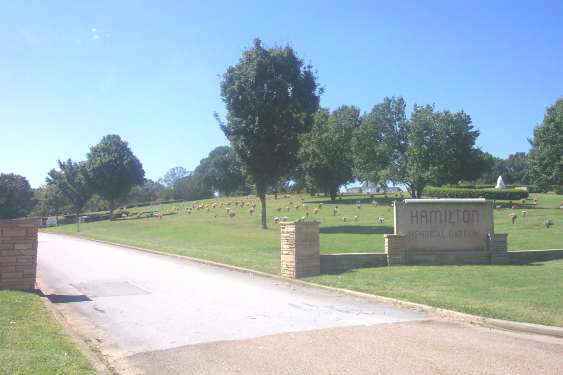 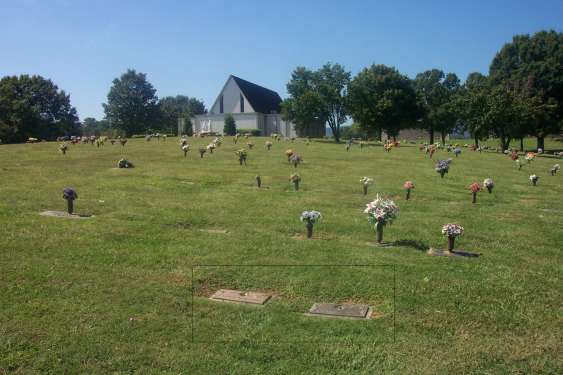 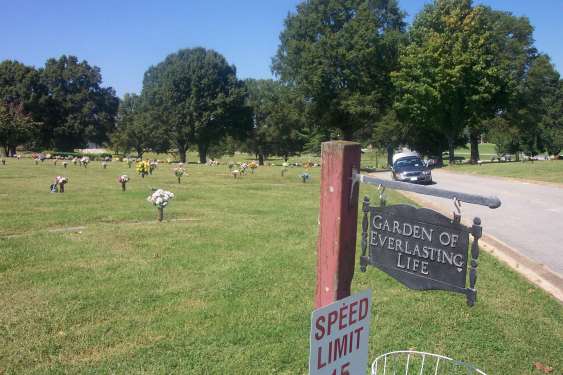 Graves Are Located A Few Graves In From Car In Background 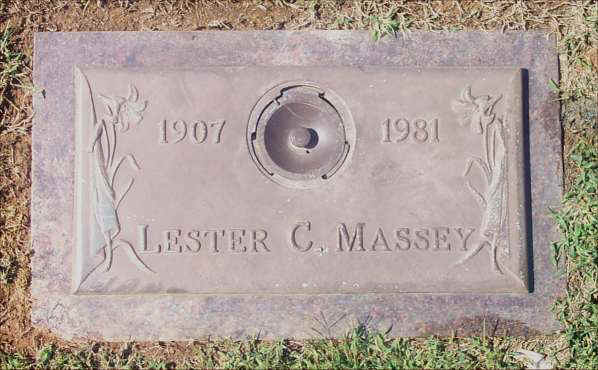