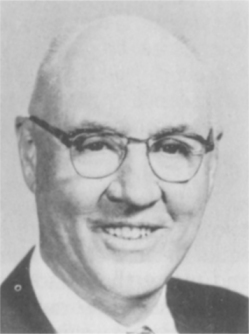 Biographical Sketch On The Life Of J. H. McBroom

James Houston McBroom, Sr., was born August 20, 1889, in Readyville, Tennessee. He was the son of Robert Lee and Mary Jane (Basham) McBroom.

He attended high school in Readyville, Tennessee. Next he attended Nashville Bible School (now David Lipscomb College) where he graduated receiving the Bachelor of Literature Degree. Following his work at Lipscomb he entered Atlanta Theological Seminary where he received the Bachelor of Divinity Degree. Last he attended the American University (Washington. D.C.), MTSC.

On August 12, 1913, James Houston McBroom married Miss Johnnye Pearl Lewis. To this union one son and one daughter were born. The son was named James Houston, Jr., and the daughter, who died in infancy, was named Dorothy Ann. McBroom's first wife died in September, 1951. On September 8, 1953, he married Miss Evelyn Louise Crunk.

States in which he held gospel meetings were the District of Columbia, Tennessee, Florida, Virginia, Georgia, Oklahoma, Kentucky, Alabama, Pennsylvania, Illinois, and California.

McBroom served on the Board of Burritt College, Spencer, Tennessee.

At Granite City, Oklahoma, he baptized 65 people in one meeting, including an elderly cousin whom everyone had given up on. His greatest number of baptisms in a meeting was 85, at a church near Livingston, Tennessee.

In his early life he taught school in Cannon and Rutherford Counties in Tennessee.

While preaching for the church in Smyrna, Tennessee, he spoke on a daily radio program over WGNS in Murfreesboro, Tennessee, for three years. He called his program "Grace and Truth." His great grandfather and great grandmother were baptized by Alexander Campbell.

There are many interesting things in the life of McBroom. He was a descendant of one of the three McBroom brothers who came to America from Scotland. He read the Gospel Advocate regularly for 70 years. While preaching for the Fourteenth Street Church in Washington, D.C., he served as a guest Chaplain for the United States Senate in the 1930's.

At the time of his death McBroom was a member of the Paragon Mills Church of Christ. He taught the Wednesday night Bible class there during the last ten years of his life. His knowledge of the Bible, his wit, and his keen interest in the souls of men served him well over the 88 years that he lived, and many thousands were recipients of his efforts to expand God's cause here on earth.

McBroom was baptized by J. W. Shepherd in August, 1903, while attending the New Hope congregation, Readyville, Tennessee. He was immersed in the Stones River nearby. He had David Lipscomb for a teacher the last two years that Lipscomb taught. While he was at the Nashville Bible School, he and the late B. C. Goodpasture were partners in the debating society - - and they never lost a debate.

An interesting experience happened in Hilham, Tennessee, where McBroom was holding a meeting. After a severe storm occurred the called it a "gully washer," he and the song leader, the late Jim Patterson of Abilene, Texas, debated whether or not to go to the services that night. The decision was to go, and the entire audience was baptized that night --all seven who had come with the intention of being baptized!

Location Of The Grave Of J. H. McBroom, Sr.

James H. McBroom, Sr. is buried in the Woodlawn Memorial Park Cemetery in Nashville, Tennessee. The Cemetery is located behind the 100 Oaks Shopping Center that faces I-65 just before the I-440 Interchange in the southern part of the city. From 100 Oaks travel east on Thompson Lane and turn left into the main entrance of the Woodlawn Cemetery. Take your first left and travel up the hill. Note that Fountain View C & D will be on your left. At the top of the hill you will see a fountain area. Turn left into the fountain circle. Looking straight south toward Thompson Lane travel in down the path. Go nearly to the road and go into Fountain View B on your left three or four rows. From Thompson Lane the grave is about 10 rows in. 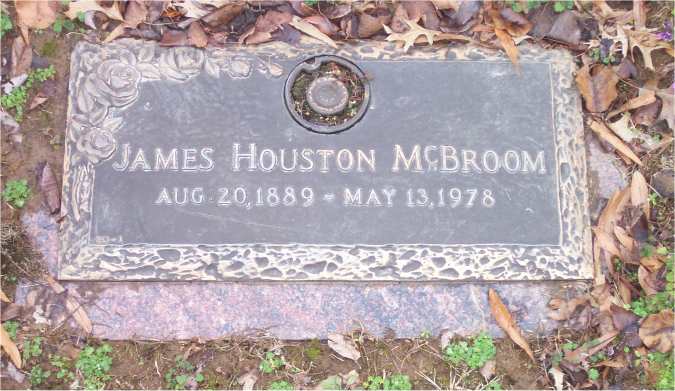