R. P. Meeks was born in Stantonville, Tennessee, Sept. 18, 1849. He was a student at Mars Hill, Florence, Alabama under T. B. Larimore, and later at Bethany College, W.Va. 1871-1875. His father, John H. Meeks (1814-1898) was a Representative in the Tennessee State House Of Representatives for many years. He was a well known educator and gospel preacher in West Tennessee from about 1878. He was the principal of the Bible Department of West Tennessee Christian College 1889-1893 (forerunner of Freed-Hardeman University). Around 1876 Knowles Shaw, the singing Evangelist (as he was known) preached a meeting in Henderson, Tennessee, where the instrument was introduced to the worship services of the church. 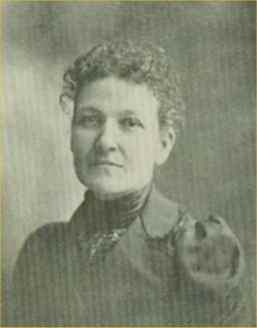 In 1890, N. B. Hardeman, a student at WTCC, was highly influenced by the teaching of Meeks, resulting in his baptism. Later he also baptized another great educator at F-HC, L. L. Brigance.

Around the turn of the 20th century Meeks and A. M. St. John were the elders at the Henderson Christian Church. In January of 1903, E. A. Elam was invited by A. M. St. John and some of the students of the then, Georgie Robertson Christian College (forerunner of F-HU also) to come to present a gospel meeting at Henderson, where he was to address the use of the instrument of music in worship. Elam was met at the train depot by R. P. Meeks, where Meeks encouraged Elam not to preach the meeting because the roads were muddy from much rain, plus there might be much disagreement if he preached against the use of instruments in worship. To this Elam responded that he came to preach the truth, and that given the opportunity he was going to do so. As a result the Christian Church building was closed to Elam . So, the meeting was conducted in the Baptist Church building. The meeting resulted in at least 25 of the brethren, who had worshipped with the Christian Church, withdrawing and beginning to meet separately. They began meeting in the courthouse with A. G. Freed and N. B. Hardeman doing the preaching. A. M. St. John, along with A. G. Freed, became the elders of the newly formed congregation based on the simple New Testament pattern. As far as can be determined, R. P. Meeks never left the instrument behind. 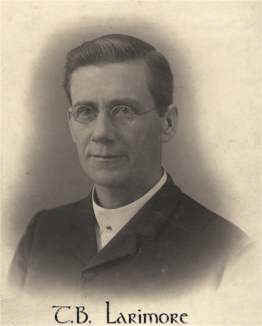 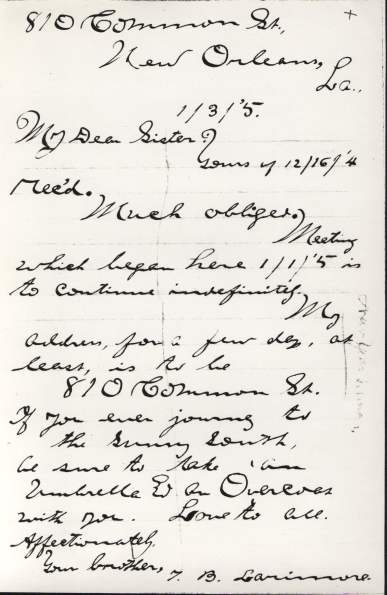 Letter from T. B. Larimore To his sister, Mollie

One of the most interesting things about R. P. Meeks was that he was the brother-in-law of T. B. Larimore. His wife, Mollie, was T. B.'s only sister. Larimore worshipped without the aid of the instrument, where his brother-in-law defended it. Though R. P. Meeks was in error on the subject of the instrument, he was in harmony with the scriptures on all other subjects, and defended the faith on many other fronts. As has been noted, his contributions to the Restoration Movement through the teaching and baptizing of N. B. Hardeman and L.L. Brigance are of great importance.

R. P. and Mollie Meeks are buried in the city cemetery at Humbolt, Tennessee. Go north from Jackson, Tennessee on 45W about 15 miles to Humbolt. Turn left on 45W Business. Go into town to 17th Street. Shelton-Hunt Funeral Home is on the right. Turn left on 17th and head out of town. The Cemetery is on the left before the railroad tracks. As you enter the cemetery, head toward the back. There will be an elevation as you travel to the back of the cemetery. When you see the flag pole go to it. With your back to the entrance of the cemetery, facing the flag pole, look to your left and proceed down the hill about 40 feet and the Meeks graves are on the right. His father, John H. was a faithful Christian until his death, and is buried in Stantonville, Tennessee just a few feet from the mother of T. B. Larimore, Aunt Nancy Larimore.

Location Of Parents of the Meeks and T. B. Larimore 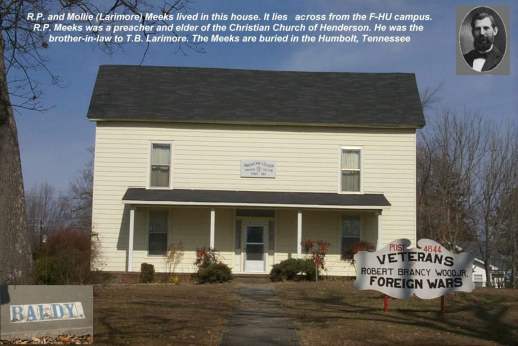 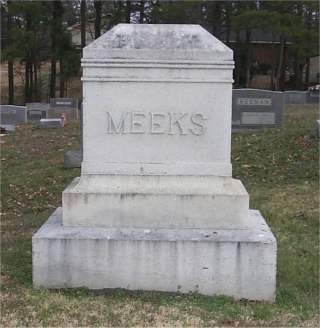 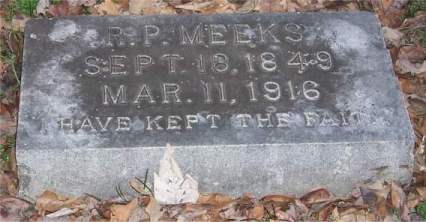 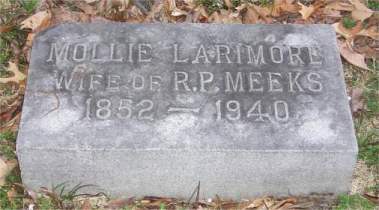