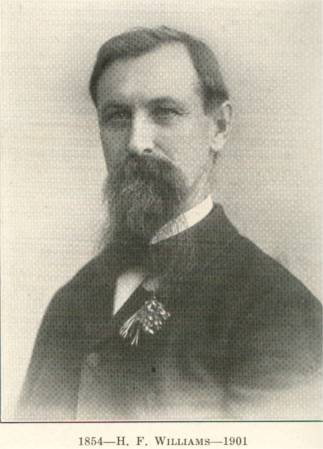 Biographical Sketch Of The Life Of
HENRY FRANKLIN WILLIAMS

The wonderful possibilities in man are to be seen in the subject of this sketch. Every organ of the human body and every member of it lend itself to the accomplishment of the mission of human life. These organs and members are the human channels through which the spirit or soul of man operates. The possibilities of the human life may best be seen when some of these useful members, through accident, have been eliminated, or the powers of the soul may be seen to accomplish their work in spite of the mutilation of the physical body.

In 1810, James Williams and wife, Sarah Allison, migrated from Virginia to Tennessee and settled near Chapel Hill. James Williams was a pious man and an ordained minister of the Methodist Church. He lived and died near Chapel Hill and his ashes now rest in the cemetery there. Among his children was one named " William Allison Williams." He grew to manhood and married Mary Wilhoite Murdock. After his marriage he moved to Rally Hill. Here he lived and reared a large family of children. Among his children was Henry Franklin Williams, the eighth of eleven children. He was born on February 19, 1854. His mother died in 1860, when Henry Franklin was only six years old The children were scattered after their mother's death, and an older sister took Henry Franklin to live with her in Mississippi. After living with his sister in Mississippi for four or five years, he returned to Tennessee to live with his father and stepmother.

Three of his older brothers were in the Confederate Army. After the close of the war in 1865, when Henry Franklin was eleven years old, he was assisting in the operation of an old-style sorghum mill and happened to the misfortune of getting both hands and one arm mangled in the mill. The doctor said he might as well die, for with no hands the boy would be a burden on others. His kind-hearted stepmother begged the doctor to save one thumb on his left hand, which was crushed badly. With no right arm and only a thumb on the left hand, he was left to battle through life with this great handicap. It seemed that he was 'helpless and would indeed be a burden upon others. However, young Williams determined that, in spite of his being a cripple, he would be a burden to no one, but would be a help to others. If every boy had the determination that young Williams had, the world would be far better off. He attended school in his community for a few months and made good use of his opportunity.

In 1876 he entered school at Mars' Hill under the lamented T. B. Larimore. He had obeyed the gospel in 1872 at the age of sixteen. He inherited a strong pious nature and had cultivated perseverance through his misfortune until he had determined to make a success at whatever he could find to do. He had moved from Giles County to Maury County when he entered school at Mars' Hill. As a student there, he was patient and persevering. He entered school determined to obey every regulation and get the most out of his schoolwork. He was not in sympathy with disobedience or ungodliness. He was emotional in his nature, but guided his emotions by strong, intelligent conviction. He appreciated his opportunities and made rapid development while in school. He supported himself while in school by selling books and subscriptions to the Gospel Advocate. He was economical in his living and knew bow to spend money to the best advantage. He not only paid all of his expenses while in school, but even sent money to his father to help the family bear the expenses of living. Think of a young man with only one arm and no hands supporting himself while in school and at the same time helping his father support the family at home!

After leaving Mars' Hill in 1878, he taught school in Mississippi for one year. Next be came to Lincoln County, Tennessee, and taught in that county in 1879 and 1880. In 1880 be was elected County Superintendent in Lincoln County and served one term. After leaving Lincoln County, be moved to Williamson County and taught school at Callender's Station. On December 16, 1880, be married Miss Ella Maultsby, of Giles County. She was a teacher in the public schools at that time. In 1886 be moved to Pulaski and became field editor of the Gospel Advocate. He continued this work until his death. In the fall of 1889 he moved to East Nashville and traveled for the Gospel Advocate and preached the gospel. After coming to Nashville he helped start a congregation in Robertson Schoolhouse, located on what was later known as Tenth Street. The first meeting was held on October 26, 1890, in one room of that frame house. There were present at the first meeting nineteen members of the church and eight who were not members. He was associated in this work with William Lipscomb, Sr., E. G. Sewell, and T. F. Bonner. This congregation grew and later became known as the Tenth Street Church, and is now known as the Russell Street church of Christ. Brother H. F. Williams was one of the first set of elders that the congregation had.

Brother Williams wrote much for the Gospel Advocate. It was remarkable that he could do so much work and so many things with no hands. He managed with the one thumb left on the stub of his hand to feed himself, dress himself, and do anything else that he wanted to do. He was not dependent upon others. He held the pencil in his mouth and wrote a very legible script. The writer of this now has on his desk letters and manuscripts, which he wrote. Again we are constrained to remark, how much can a determined soul accomplish in spite of handicaps! Brother Williams traveled for the Gospel Advocate, taught school, preached the gospel, and supported his wife and eleven children. He asked no assistance of any one. He was humble and appreciative of all favors shown him, but he did not want to be dependent upon any one.

His work took him from his home most of the time. A man's character may be estimated largely by what he thinks of his family and what his family thinks of him. The following letter, written to one of his sons while he was waiting for a train at Normandy, Tenn., reveals much of his character:

My Dear Son: While waiting, and as it is raining, I want to talk a while with you. When away, I think of so many things I would like to say; but as I am with you so little, I forget them. So far you have pleased me so well by your good behavior that I almost dread to call your attention to the many temptations, pitfalls, and hidden evils that beset your pathway. Your desire to be really good and do the right, with a strong will to resist if every appearance of evil," will strengthen you to overcome. Your native good sense will enable you to judge between the good and evil and choose the good; but your main reliance must be on the Lord. " Trust in the Lord with all thine heart;" "commit thy way unto the Lord," and "lean not unto thine own understanding;" trust him, " and he shall give thee the desires of thine heart;" call upon him in every trouble. But you know these; only, I would have you drink more and more into their meaning.

The first special temptation I feel like warning you against is bad companionship, either boys or girls. Here quality is the one thing to be desired all the time. Second, handling other people's money. In one sense, handle it as it were trash; in another sense, as it were your very character itself. "The love of money is a root of all kinds of evil." "A good name is rather to be chosen than great riches." "A little that a righteous man bath is better than great revenues without right." Resent evil suggestions with all the power and prayer of your soul at the very first point, if you would be a truly successful man, strong in the Lord and in the power of his might. Evil thoughts entertained are like bad visitors. Hearty love of the truth and the companionship of the pure in heart are the very best safeguards. Love to mamma and all the dear, precious little ones. " Keep thyself pure."

Brother Williams was a sound gospel preacher. He was always in earnest and very thoughtful and practical in the application of his teaching. People who heard him preach said they never heard him without learning something. Many are still living who were blessed by his preaching.

Brother Williams not only had to battle through life with great odds against him, but he also met a tragic death. On Wednesday, February 13, 1901, he and Brother F. B. Srygley were riding in a buggy on Cedar Street, in Nashville, when an electric car struck his buggy and threw both of them out on the street. Brother Williams fell on the side on which he had no arm. His head received the full force of the fall. He was taken to an infirmary, and it was thought for a while that he would survive. He had much vitality and energy and had made a brave, fight all his life; but the blow was too much and he passed away, February 16, 1901, at the age of forty-seven. He was buried in Mount Olivet Cemetery. He had lived a good and useful life; he had served the Lord and trusted him with all his heart; he had been successful in spite of his great handicap; and he was successful in his death because he trusted in the Lord. His life is an inspiring example as to what one can do if fired by ambition and blessed with an indomitable will and a simple trust in the Lord.

Henry F. Williams is buried in the Mt. Olivet Cemetery, Nashville Tennessee. The cemetery is located at 1101 Lebanon Pike, Southeast of downtown Nashville. Click over to Mt. Olivet for map and location of the grave in the cemetery. 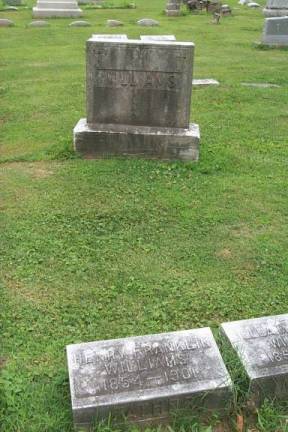