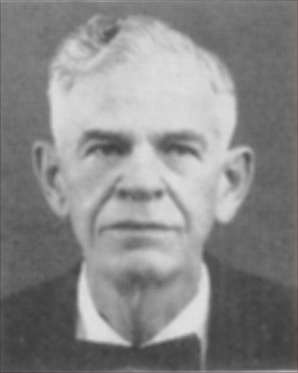 The Life Of J.D. Boren

John Darrell Boren was born July 9, 1898 in Wynnewood, Oklahoma. He was baptized into Christ at age 16 in Bardwell, Texas by A.B. Barret, at the same time his future wife, Fannie Goodwyn was baptized. J.D. and Fannie were married June 18, 1919, both were twenty years of age. To their union were born six sons: John Darrell, Jr., James E., Jodie Lee, Billy Tip, Paul G., and Maxie B. Billy Tip died at age one. The other five sons grew to adulthood, with J.D., Sr. baptizing all five, and performing their marriage ceremonies too, teaching and baptizing three of his daughters-in-law. 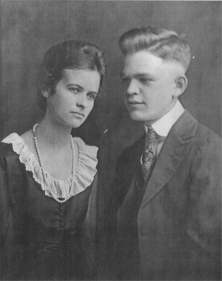 J.D. started his working career, learning the banking business. A short time later, he was offered an opportunity to get into the drug store business to learn pharmacy. That was what he was doing in Sweetwater, Texas, when in 1922 a Pentecostal preacher was challenging other preachers in and around Sweetwater to debate him. None would, so at the young age of twenty-four, he accepted the challenge, defeating him soundly. Immediately, the brethren urged him to preach. The family moved to Big Spring, Texas in 1923 where J.D. became the first local preacher for the 14th and Main Sts. Church of Christ. In 1925, he and another man from Big Spring, Texas drove all the way to Dayton, Tennessee, in a Model T Ford to attend the Scopes "Evolution" Trial. He financed the trip by writing a song about the trial. Sheet music sales along the way made the trip possible. During his visit to Dayton he had the opportunity to interview both William Jennings Bryan, prosecution lawyer, and Clarence Darrow, defending attorney for Mr. Scopes. He also interviews Mr. Scopes and others directly connected to the trial. Due to the notoriety he received from the song, he was given an honorary seat in the courtroom just behind the chair of William Jennings Bryan. 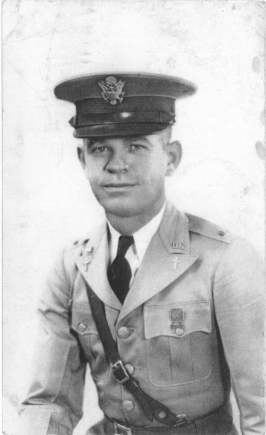 A copy of the song he wrote sits on display in the basement museum of the courthouse in Dayton, Tennessee where the trial took place. He preached in Big Spring for three years, and then three years in Lamesa, Texas, before moving to the Rio Grande Valley of Texas in 1931. He had to work three jobs to support his family in these "Depression" years, preaching at Weslaco, Texas, serving as deputy sheriff of Hidalgo County, in 1932 or 1933 serving also as Chaplain for the Civilian Conservation Corps (the CCC) for the lower Rio Grande Valley of Texas.Taking note of his great work as a Chaplain with the CCC, the U.S. Army offered him a commission as a First Lieutenant if he would become a Chaplain in the Army. It was contingent upon his writing a thesis, substantiating the "Church of Christ" as an identifiable religious body for government approval to have a representative Chaplain in the Army. He became the first preacher from churches of Christ to become a Chaplain in the U.S. military. He served for four years at Ft. Sam Houston in San Antonio, and then opted out of the service, returning to the pulpit for the 7th & Ave. G church of Christ in Temple, Texas, for three years. But, with the war starting in Europe in September of 1939, the Government offered him a promotion if he would come back into the Army, which he did in late 1940 or early 1941. 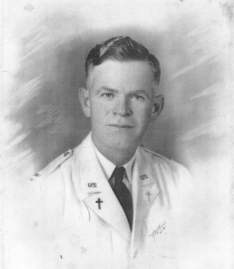 He was made the Post Chaplain at Camp Wolters, Texas, between Mineral Wells and Weatherford, Texas. He remained on active duty throughout WWII, being stationed at different places, and making two assigned trips to the South Pacific. By divine providence, on one of those trips, he went to Guadalcanal, and discovered his son, James E., a Marine medical-corpsman, was there. They were able to spend a few hours together. During his service as Chaplain he assisted over 500 young men in obedience to the gospel, who would otherwise might never have heard the way of the cross. After the war, J.D. left active duty with the army as a Lieutenant Colonel, and finished his retirement in the Army reserves. Three of the sons had served their country during the war and when it was over, went their own ways. But J.D. moved his wife and two remaining sons to Wewoka, Oklahoma, where his parents lived, to mesh back into civilian life.J.D. returned to full-time preaching in 1947 in Oklahoma City, preaching for what became known as the 31st and North Pennsylvania Ave. congregation for 8 or 9 years. Then he and Fannie moved to Denton, Texas, where he preached for the Pearl St. congregation for 4 years, and concluded his full-time work with the Daingerfield, Texas, congregation for another 4 years. He semi-retired in 1962, but still preached most every Sunday somewhere, and conducted gospel meetings. He later served as an elder for two congregations in Dallas. After seventy years and three months of blissful marriage, Sister Boren died in July of 1989 at 91 years of age. J.D. lived a few more years when the Lord called him home in May of 1993, lacking only about 6 weeks from being 95. Hulen L. Jackson and Owen Miller preached their funerals, and they were buried in Laurel Land cemetery in the Oak Cliff section of Dallas.J.D. was an "old time gospel preacher." He fearlessly preached the truth, and with a brilliant mind, ably defended it in a number of debates with sectarians throughout his career. He preached in countless gospel meetings. He baptized over 500 young Army men during his active duty during World War 2. All his sons grew up to be faithful Christians. At this writing (Feb. of 2004), his son Maxie B. has preached himself full-time for right at 50 years, and another son, Jodie has preached for 34 years at Tuscola, Texas, and J.D., Jr., and his wife, Jan, have given of themselves freely in many mission endeavors since he retired as a Capt. Pilot with TWA airlines. Only eternity will reveal the good this family has done for the Cause of Christ.
-By Maxie B. Boren, January 29, 2004

Webmaster's Note: Many thanks to Maxie B. Boren, the youngest son of J.D. Boren, who provided the above sketch and photos from the life of his father. It has been my great pleasure to know he and his good wife Fran for a number of years now. Maxie is one of the finest people I know. Hearing him speak of his father causes me and the readers of this page to appreciate the great work this family has done through the years. I want to add a paragraph here that Maxie wrote me in 2004 showing the further influence of this family in our nation as well as in the church. He wrote: 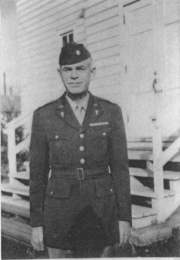 "My grandfather on my mother's side, P.L. Goodwyn, was a member of the church, and converted my grandmother (Laura Turner) from the Baptist church. They had 7 girls and one son, my mother being the 2nd child. My grandparents on my dad's side, Mark Lattimer Boren (married Nannie Weatherall), have a most interesting background as far as the church is concerned. Grandmother Boren had been raised a Methodist (her father a Methodist preacher), and granddad Boren was really nothing religiously when they married, but a man of great character and integrity. As a young couple in Indian Territory (late 1800s...later, Oklahoma in 1907), expecting to raise a family, decided they would read the Bible independent of one another and then decide what church they would join. After the year was up, they agreed they could only find one church taught in the Scriptures, and that they would set out to see if they could find it. In a wagon, they attended every "Revival" or church meeting they could find, and compare what they had heard to what they had read in the Bible. Nothing they heard could be fully accepted, until a small group of people within "range" of their wagon advertised a "gospel meeting." They attended and on their way home, granddad said, "That man preached the truth," and grandmother concurred. Thus, they became members of the Lord's church. They had 7 sons and 1 daughter, my dad being their 2nd child, as was my mother in the Goodwyn family. Dad was born in Wynnewood (Indian Territory ... but now, Oklahoma, in July, 1898) and mother was born in Ellis County, Texas, in May, 1898. The Boren family moved to Ellis County, Texas, when dad was but a boy. My dad and one of his brothers, my uncle Dallas L. (who is dead now, too) became gospel preachers, and chaplains in the Army. One of the sons married a devout Methodist, left the church, and regrettably, preached for the Methodists quite frequently. Another brother, Lyle H. Boren, became a U.S. Congressman during WWII for 5 or 6 terms and knew Roosevelt, Churchill, & many others personally. His son, David (my 1st cousin) became Governor of Oklahoma at age 33, and then served two complete terms and a part of the third in the U.S. Senate, before resigning to become President of Oklahoma University, where he still is. Dad's only sister was the person who co-wrote the song, "Heartbreak Hotel" which made Elvis famous. She was the PR person for many of the Grand Ole Opry stars. Her son (another of my 1st cousins, Hoyt Axton) became quite well known too in the music world, writing several well-known songs such as "Joy To The World," (#1 on the charts for about 10 weeks years ago) "Della & The Dealer," "Never Been To Spain," "Boney Fingers," and many others." 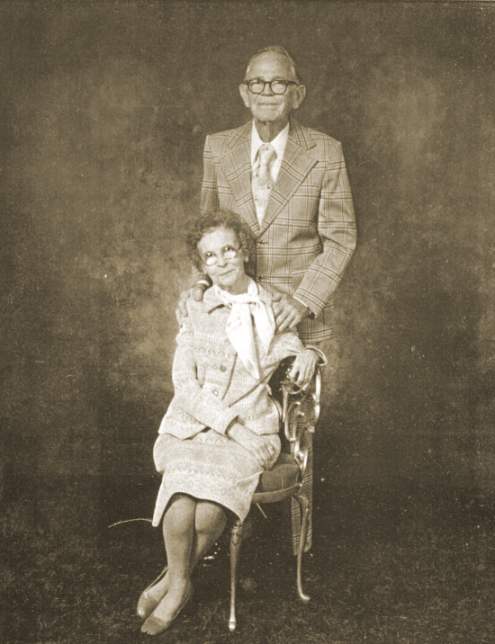 Boren had been a minister for more than 70 years, working with congregations in Texas and Oklahoma. In his early ministry, he was an active debater and traveled frequently to speak at gospel meetings and lectureships.

Estimates suggest that during his lifetime, Boren baptized more than a thousand people and was responsible for aiding in the decisions of many men to become ministers. He served as a chaplain for the U.S. armed forces and retired as a lieutenant colonel.

Boren was married to Fannie Percy Goodwyn for 67 years before her death in 1989. He is survived by four sons: John of Teton Village, Wyo., Jodie of Abilene, Texas, Paul of Kerrville, Texas, and Maxie of North Richland Hills, Texas; 11 grandchildren; and 16 great grandchildren.

Read This Sermon By J.D. Boren

Interview On Attending The Scopes Trial

Directions To The Grave Of J.D. Boren

John Darrell Boren is buried in the Laurel Land Cemetery in Dallas, Texas. Just south of Dallas on East I-35 take the Laureland Exit 420. and travel east. From the exit you should be able to see the cemetery as it is adjacent to the east side of the freeway. Enter the cemetery, and go past the funeral home into the cemetery itself. Go to Section 45. The grave is located in area of the SW corner of the section. See map below for directions in the cemetery. The little red dot shows where the grave is located. (The cemetery phone number is 214-371-1336. Address: 6000 SRL Thornton Fwy. Dallas, Texas.) See Cemetery Map Here 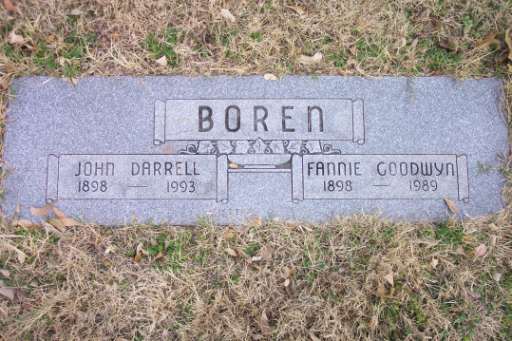