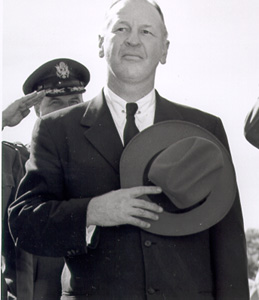 Dorsey Hardeman was born December 11, 1902 in Henderson, Tennessee to Professor N.B. and JoAnna Hardeman. His early education was spent at the Freed Hardeman College, founded by his father and A.G. Freed in 1908. He attended the University of Florida and earned his LLB from Vanderbilt University. He came to Texas in 1932 and practiced law in San Angelo before being elected mayor in 1936. In 1938, he was elected to the House of Representatives and served two terms before joining the United States Army Air Corps and was sent to officers training school. He served in the Headquarters of the Judge Advocate General. When he got out of military service he was elected to the State Senate serving for over twenty years. During his tenure in the Senate he was one of the most powerful figures, because of his knowledge of the constitution, legislative procedures and as chairman of the State Affairs Committee. He sponsored or co-sponsored and contributed significant amount of legislation including the sponsorship of a revised code of Criminal Procedure; the establishment of a state senior university in San Angelo; and the Stacy Dam and Reservoir on the Upper Colorado River. After his time in the Senate it was said it was an ?the end to an era.? Governor Preston Smith appointed him Executive Director of the Texas Water Commission later being named a commissioner. Senator Hardeman had many family ties to the Lone Star State, notably General William P. Hardeman and Bailey Hardeman, signer of the Texas Declaration of Independence. He was a very loyal and proud citizen of Texas and was a very astute student of the history of Texas. He was also a very successful businessman owning the historic San Angelus Hotel in San Angelo, had ranching and farming interests in Texas and Colorado, and owned and operated a title company in West Texas. Among his many business interests he was a member of many organizations. Including hereditary membership in Sons of the American Revolution, Sons of the Republic of Texas, Knights of San Jacinto, Sons of Confederate Veterans, Order of Stars and Bars, the Baronial Order of Magna Charta, Huguenot Society, Knights of Malta and he held an honorary membership in the Greek order of St. Denis of Zante. All these organizations aimed at the preservation of history and was a lifetime member of the Texas State Historical Association. He was also a member of the American Legion, State bar of Texas and the Travis County and Tom Green County Bar Associations.
-Taken From Texas State Cemetery Website

Nicholas Brodie Hardeman and his wife Joanna Kendall Tabler Hardeman had three chilken. They were: Dorsey B. Harieman; Mary Nelle Hardeman 'owers; and Carrie Neal Harieman Foy. I wrote stories about )oth the daughters after their leaths and published them in The World Evangelist. They were loth friends of mine. They were 30th active in the work of Freed-Hardeman College (now University) in Henderson, Tennessee when I attended there 1946-1949, while their father was president of the school. He was co-founder in 1908 of the school which was sventually named for him and A. G. Freed the other co-founder.

N. B. Hardeman had a brother named Dorsey who was three years older than he. Dorsey died at age 22 of pneumonia. N. B. mourned greatly the loss of his beloved older brother. About eight years after Dorsey's death, N. B.'s son was born and he named him Dorsey.

Dorsey moved to Texas in 1932 and became very active in government, business and legal affairs. He served as mayor of San Angelo, and was also a Texas State Senator for 22 years. N. B, Hardeman told me that Dorsey was over the largest state senatorial district in the United States. I remember seeing Dorsey me time when he was visiting at Freed-Hardeman.

N. B. Hardeman's granddaughter, Joanne Powers Bradshaw of Atlanta, Georgia was graduated from Freed-Hardeman when I was in 1949. She called me when she got home from her uncle Dorsey's funeral to tell me about his passing. He died August 11, 1992 in Austin, Texas at age 89. He was educated at Freed- Hardeman, the University of Florida, and Vanderbilt University.

Dorsey was a member of the church of Christ in Austin.

Dorsey is survived by his widow, Geneva; sons and daughters-in-law, Mark and Francine of Sonora, Texas and Bryan and Rebecca of Austin, Texas; grandchildren, William Bryan Hardeman and Genny and Joy Hardeman of Austin; a niece, Joanne Bradshaw of Atlanta, Georgia; nephews, Nicholas Powers of Memphis, Tennessee and Joe Hardeman Foy of Houston, Texas.

Directions To The Grave Of Dorsey B. Hardeman

D.B. Hardeman is buried in the Texas State Cemetery at Austin Texas. The cemetery is located at 909 Navasota Street, Austin, Texas 78702. Phone:512-463-0605. In downtown Austin, take I-35 to Exit 234C from the south or Exit 234B from the North. Converge on E. 7th St. On E. 7th go to the fourth street on the left Navasota. You will see the office on the right. It is best to enter the 11th Street entrance and travel in. The road through the center of the cemetery is called State Highway 165. Travel until you see the Civil War Cemetery on your left. In front of it is the beautiful above ground sarcophagus of Albert Sidney Johnson. Just across the street is Republic Hill Section 2. This is the burial plot of some of Texas' greatest heroes including Stephen S. Austin, Governor John Connally, and Dallas Cowboys Football coach Tom Landry. At the front of the section closest to the street is the grave of D.B. Hardeman. Also behind him further up in the cemetery is the grave of a restoration preacher by the name of W.S. Dabney. 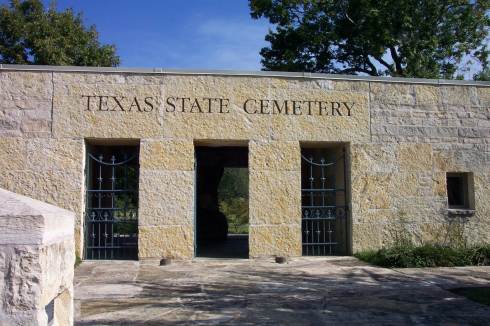 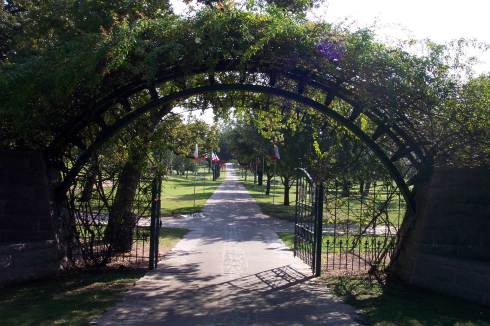 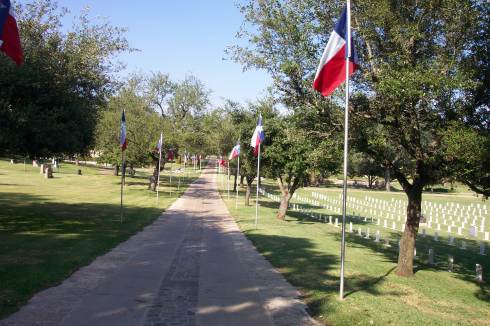 State Highway 165 Back Toward The 11th Street Entrance, Civil War Cem. On Right 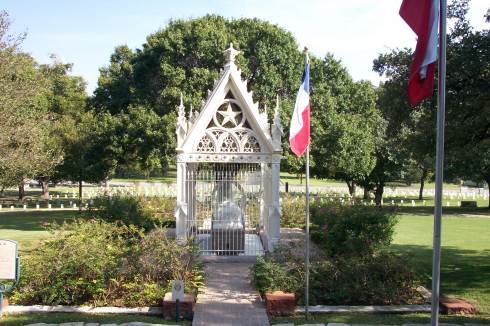 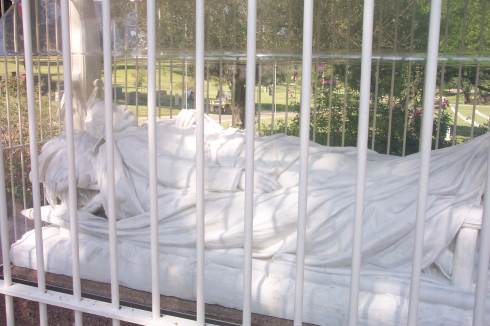 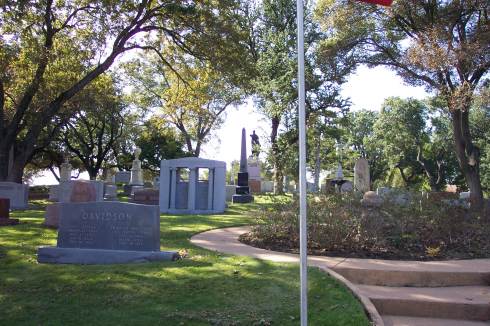 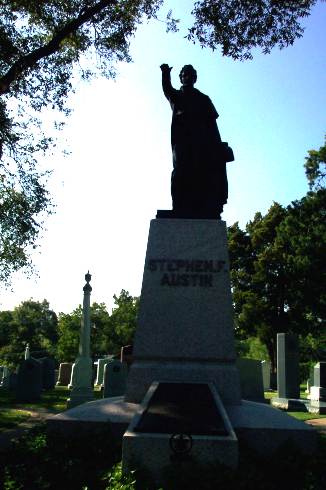