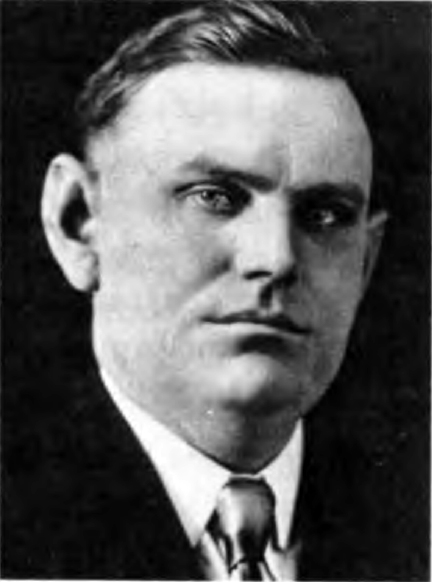 The Life of Don Hockaday

William Doniphan Hockaday was born in Plattsburg, Missouri on April 17, 1888 of William Doniphan and Louise Grady Hockaday. His early education was in the public schools of Plattsburg and Granite Oklahoma, where his family moved in 1901. His parents were members of the Christian church in Missouri, but in Granite they began worshipping with the church of Christ and “liked it.” The family remained life-long members of the Granite church and all of them were faithful and strong members of it. W. Don obeyed the gospel in Missouri under the preaching of T.H. Capp.

Don was among the first students to enroll in the Cordell Christian College when it first opened in 1907. He attended there for some three or four years, and later attended the Southern Baptist Seminary in Louisville, Kentucky. His devotion to The Lord caused him to be a diligent student of the Word all of his life. He was married on June thirtieth, 1921 to Miss Anna Lee Baxter, of Abilene, Texas. She was a sister of Batsell Baxter. One child, a son, was born to them. W. Don, Jr. did his undergraduate work in Harding University and received the Ph.D. degree from Texas A & M University. His major field was Botany. Like his father, he was a dedicated Christian, but died while still quite young from nephritis while teaching in Abilene Christian University. After five years his widow married Leonard Pamplin, who adopted Don Jr.’s two youngest sons. W. Don began preaching in 1911 at Dill City, a few miles West of Cordell where he was in school. He had much difficulty learning to become an effective speaker. In fact, this problem was so serious his own father asked Brother J.N. Armstrong, President of the Cordell school, to discourage him from preaching. I remember hearing Brother Armstrong talk of this, and to him, it was the ultimate proof that no boy should ever be discouraged from preaching. W. Don did become a very capable speaker and one of the most useful of men in The Kingdom. A niece writing of this says: “But his mother was a great encouragement to him and he kept trying.” Along with the determination of a boy, a mother’s love and encouragement, one has a combination that cannot be estimated, much less over estimated.

He did local work with the Pryor Street church in Atlanta, Georgia; Vernon, Texas; at Hobart and Wilson in Oklahoma. Perhaps he was best known for his outstanding work in difficult mission fields. In 1931 he went to Montana, a mission field, supported by a few churches in the South. Within the next seven years he established The Church in Billings, Kalispel, and Bozeman in Montana and in Powell and Sheridan in Wyoming. In 1938 he left a self-supporting church in Billings to go to Minneapolis, Minnesota, to preach, again a destitute field so far as the New Testament church was concerned. After a year there he was forced to leave because of ill health, and he was never able to preach regularly again, being in and out of several different hospitals for the rest of his life, which ended on December 15, 1958 at Woodward, Oklahoma. His companion continued alone for almost twelve years, following him to their eternal home on February 23, 1970. What was mortal sleeps in the family plot in the Granite cemetery.

When people talk of W. Don Hockaday they do not talk long until they speak of his total dedication to The Lord. His sister, Mrs. George S. Benson says: “He was very devoted to The Lord and wanted to preach instead of being a hardware merchant like his father. Batsell Barrett Baxter, a nephew, tells of this and mentions a time when he visited their home in California. They tried to show him “the sights” in Los Angeles, but only a glance sufficed, and soon he was talking again about The Lord’s church. Continuing, Brother Baxter says: “When the day was finished, we felt we had wasted our time in driving about the city. It would have been better to simply sit in our living room and talk uninterruptedly about spiritual matters. We felt there was a lesson in this much needed by most Christians today.” Other members of his family say similar things about him. Ellis R. Williams, of Lubbock, Texas, whose first wife was my sister, worked with him in Billings, after having worked with him in Hobart and Wilson in Oklahoma. In 1934 the Billings work was very difficult and the support very meager due to the terrible depression. Had not Ellis been able to get some part-time work in Billings, his family would have suffered from a lack of food. Brother Hockaday could have also had such work, but refused it, and he and his family did suffer because of a lack of proper food. While they were here going through this privation I remember an article he wrote in his bulletin in which he said that they “were having a hard time” (he didn’t say HOW hard) but he said The Lord had promised to “be with you always, even to the end of the world” if we would preach The Word. He said he believed The Lord and would do his part. Ellis Williams said he literally worked day and night to advance The Cause. I did not know until my sister later told me of the extreme hardships the Hockadays had suffered. Ellis came to know him well and without reservation speaks of the great man that he was. He truly endured hardness “as a good soldier of Christ Jesus.”

Later, some of his most fruitful preaching was in Granite, his home town. A “tabernacle” had been built on the main street, and Don held a number of meetings in it which resulted in much visible good. When his father saw such results of this work, Sister Benson says: “he was more than reconciled to the fact that Don became a preacher rather than a hardware merchant.”

Though we may not know all the things that influence a child, we do know that if a child is brought up “in the way he should go” he will not depart from it when he is old. W. Don grew up in a Christian home, and at his father’s table “. . . the whole idea of Cordell Christian College was born” when O.H. McGavock and possibly Henry Warlick, gospel preachers, and the Hockadays talked of the need for a Christian school in the area in which their children could receive a proper education. W. Don no doubt heard some of these first talks. Later in a meeting in Hobart, brethren from over the area decided to build such a school and to locate it in Cordell. Brethren Hockaday, McGavock, and Warlick sent their children there and served on it’s board and supported it with their money. Their influence was such, that in each of these families their children to the fourth and possibly to the fifty generation are still faithful Christians and sending their children to such schools.

When this article was first written and published in 1976 two members of the Hockaday family were still living; Mrs. George S. Benson, of Searcy, Arkansas and Mrs. Tillman Terry, of Nashville, Tennessee. Sister Benson has now (1985) been called “home.” But it is good to look at such a family and to see the good they have done. The “good book” tells us to give “honor to whom honor is due.” Surely the subject of this sketch was one whose memory should be held in the highest esteem. Also, it would be well for us to look about us at the living, for there are still some people who truly love the Lord are are serving Him faithfully. W. Don Hockaday was truly a great man!

-Loyd L. Smith, Gospel Preachers of Yesteryear, pages 174-177; Note: This is a timed piece. It first appeared in the pages of The Christian Worker in February, 1976. Some of the people listed as living are now deceased.

Directions To The Grave of Don Hockaday

Don Hockaday is buried in the Granite Cemetery, south of Granite, Oklahoma. From Elk City take Main Street south, past I-40. The road will be Hwy 6. Go 32 miles heading through the little town of Granite. Cross Hwy. 9 and go one mile. Turn left on E1420 Road. Go one mile and turn right on N2030 road. The cemetery will be about a half-mile on the left. Enter the main entrance. Go to the third little crossroad and turn left. Go to the end and the Hockaday plot will be on your right. From the road he is in row 17. 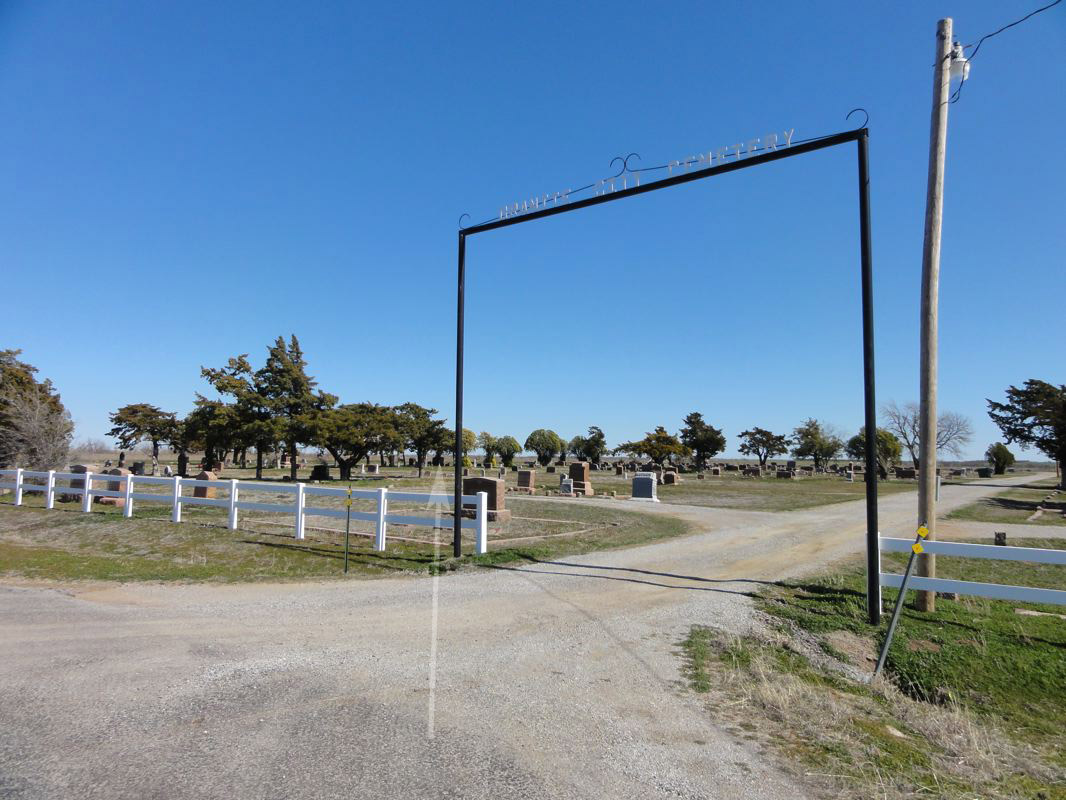 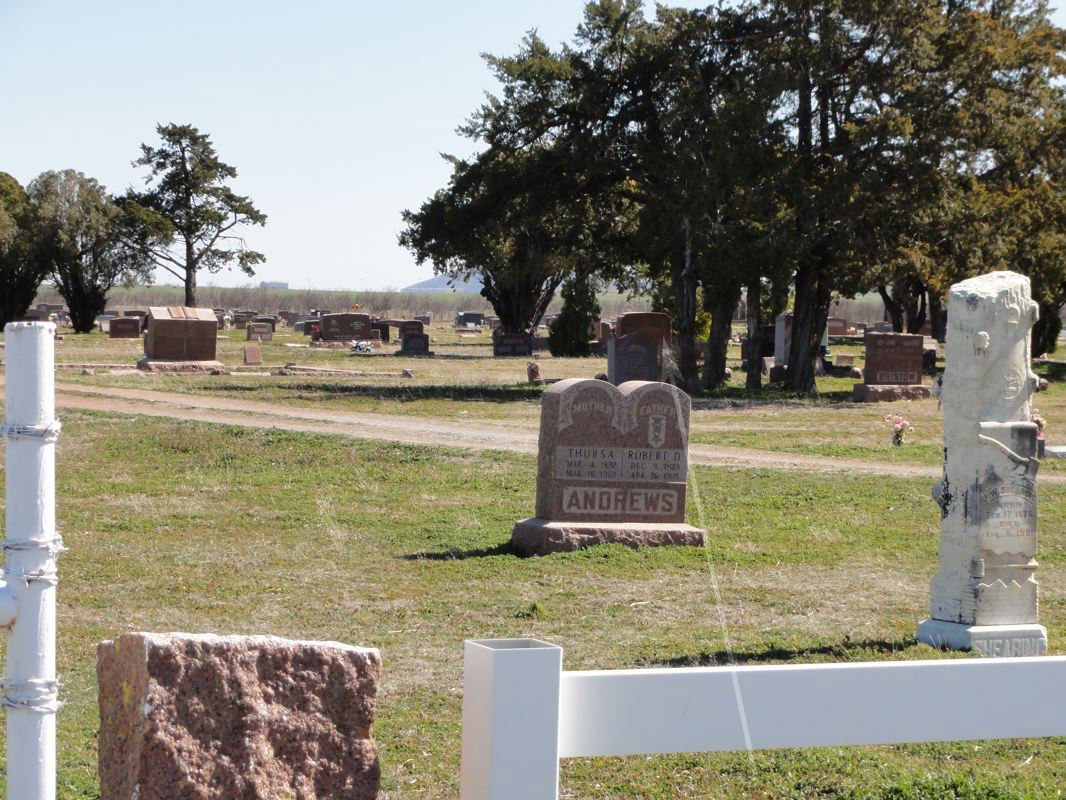 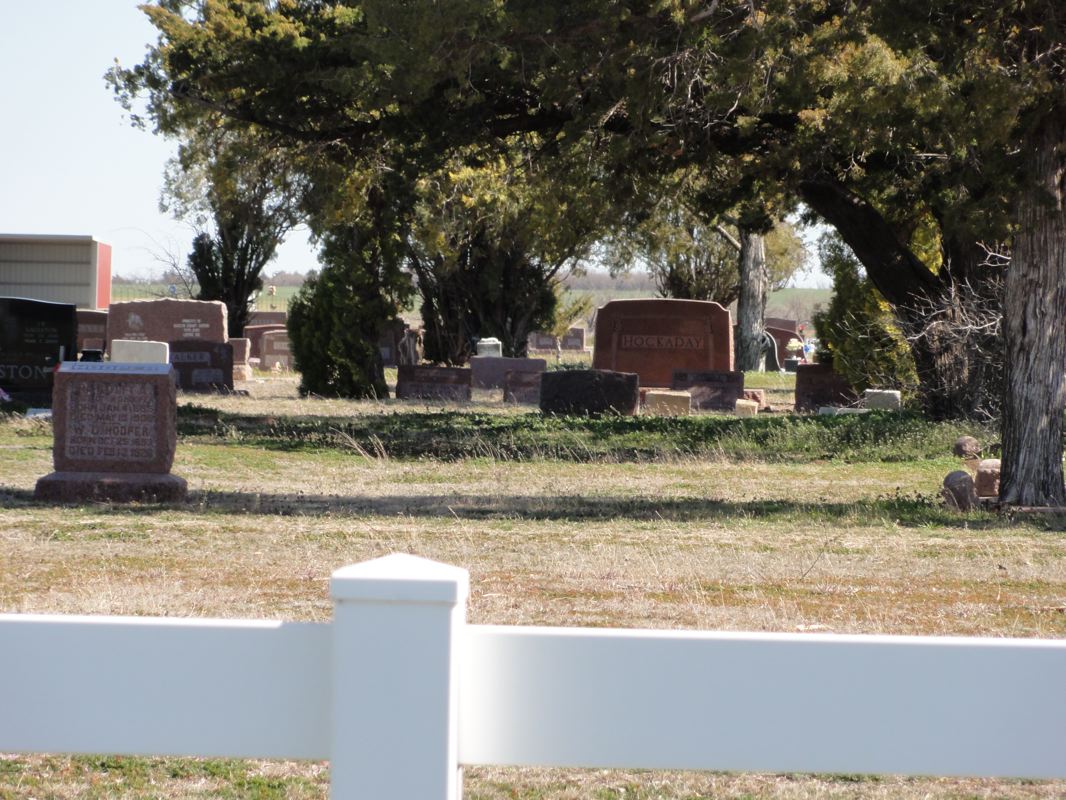 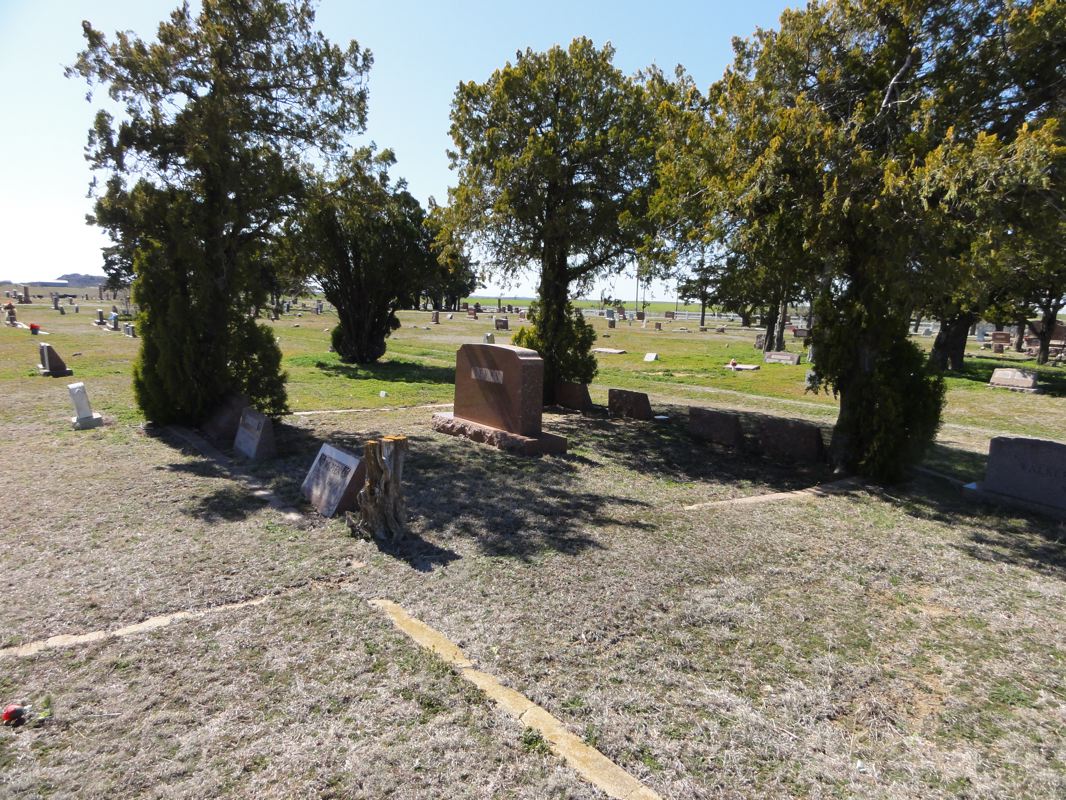 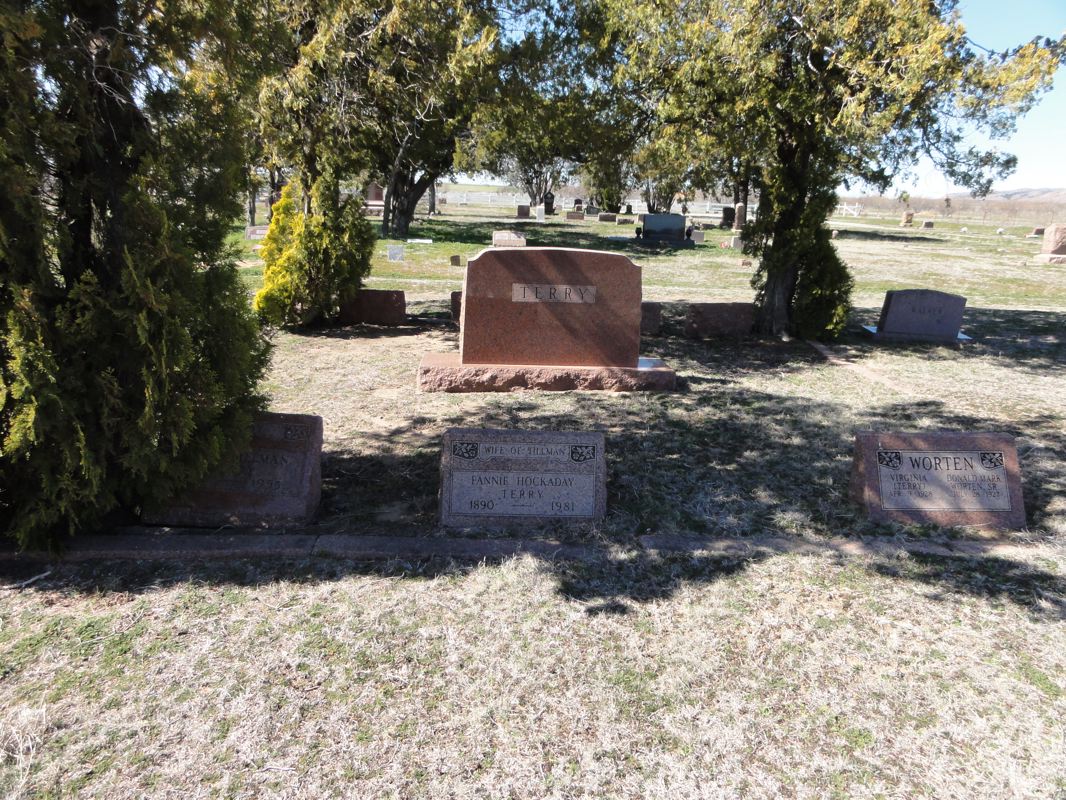 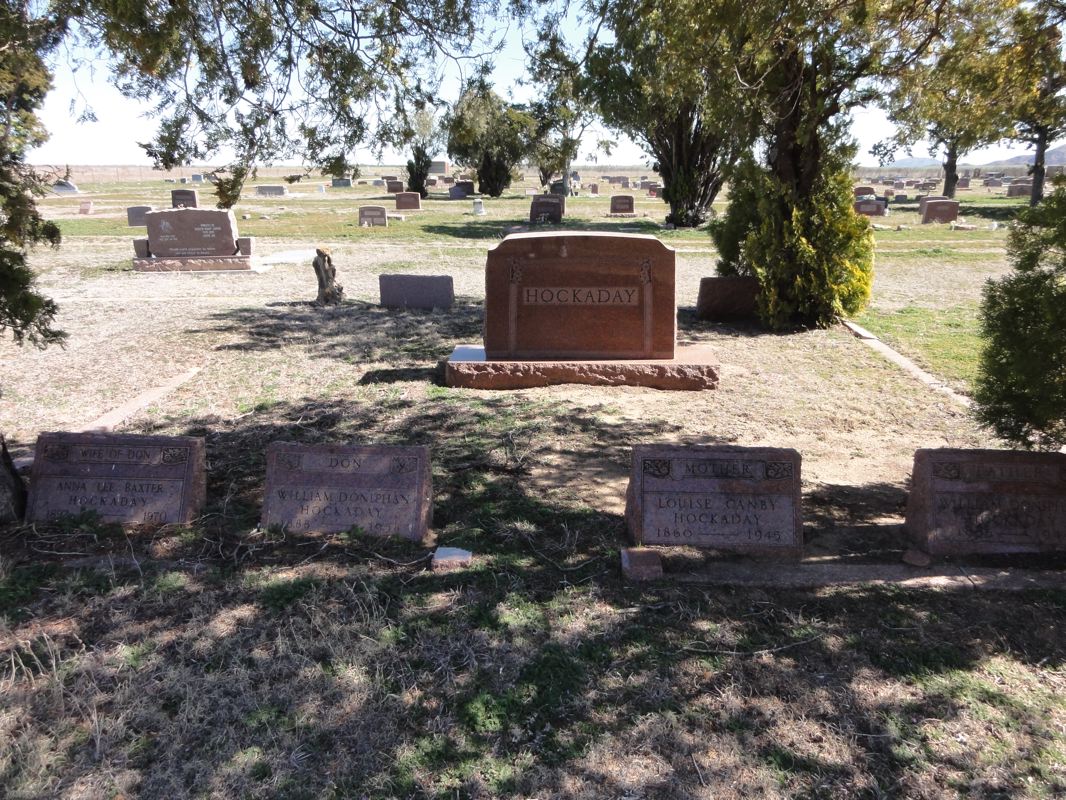 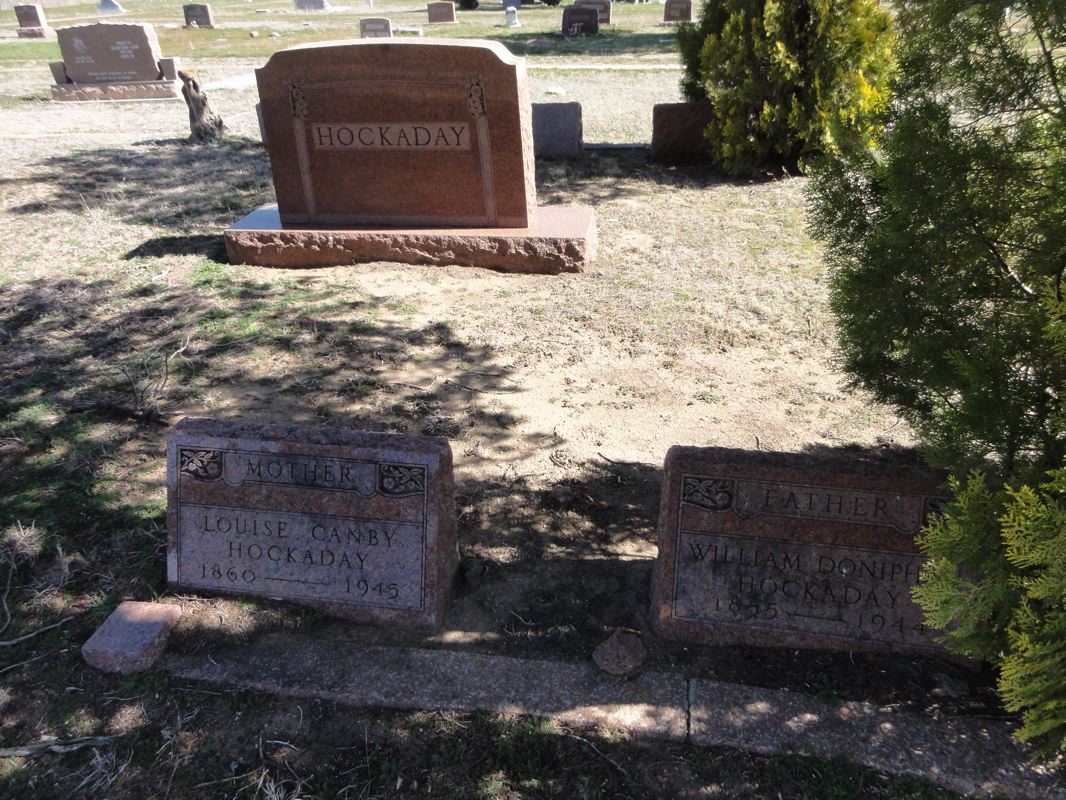 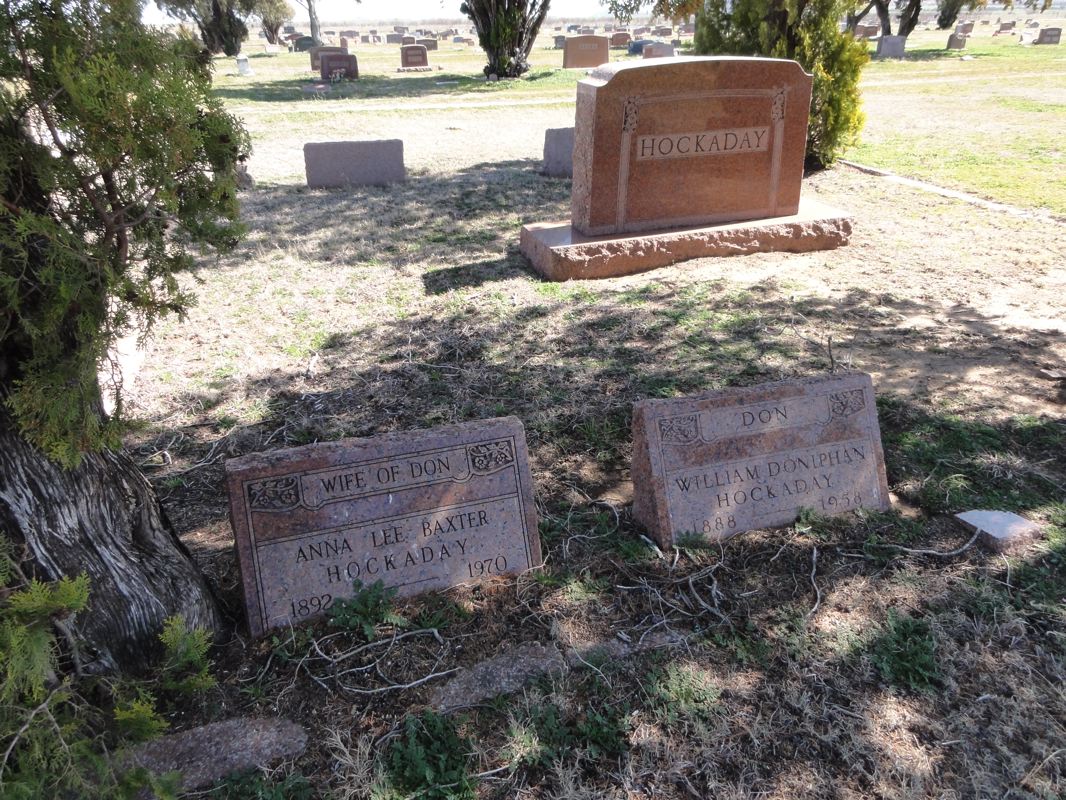 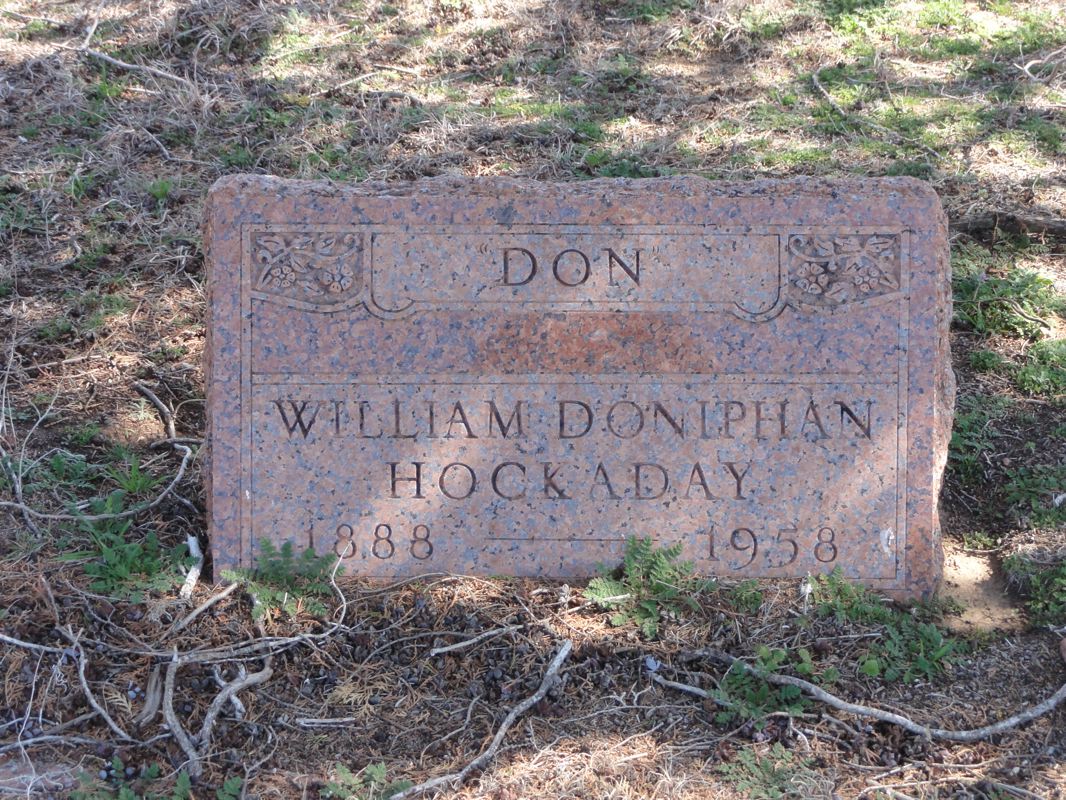 Photos Taken February, 2012
Courtesy of Scott Harp
www.TheRestorationMovement.com
Web editor note: In February, 2012, it was my privilege to visit the grave of W.D. Hockaday. I was invited to take part in the annual Affirming The Faith Lectureship in Oklahoma City, Oklahoma. Getting into the area early, I was afforded the opportunity to put about 2000 miles on a rental car in order to locate graves of gospel preachers and church leaders of yesteryear in a wide area. My second day I was able to visit the grave of Don Hockaday.