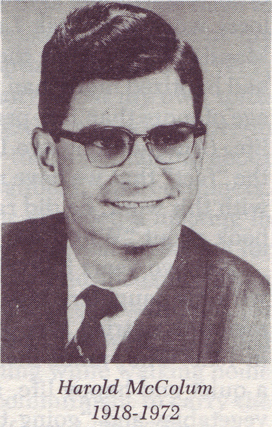 Harold D. McColum, in many ways one of the most unusual preachers of our time, was born in Taber, Alberta, Canada on November 1, 1918 of Mr. and Mrs. O. L. McColum. His parents had long been faithful Christians, and along with his brother and sister, he was brought up in a Christian home. The family moved several times in Harold's childhood, moving from Canada to Oklahoma when he was about five years old. They lived at several different places in Oklahoma, including Elk City and Hitchcock. Through the years his father farmed and operated a dry cleaning business. He did most of his grade school work in Elk City, and by the late C. E. McGaughey was baptized into Christ there when he was twelve years old. He completed his high school work at Hitchcock, and graduated from Oklahoma State University in Stillwater in 1940 with the B. S. degree.

While a student in Oklahoma State he met Miss Vashti E. Hilton, daughter of the Robert W. Hiltons of Rocky, Oklahoma. The Hiltons were also faithful Christians, and Vashti followed the teaching of her parents in that respect. Harold and Vashti came to love one another and on November 15, 1939 they were joined in marriage in the home of the bride at Rocky by Ralph Givens. Four children, all of whom are living, were born to them. They are: Sandra (Mrs. Gary Montgomery); Linda (Mrs. Dan West); Karen (Mrs. Nichols) and Anthony O.

In the summer of 1939 he was working in Tulsa and attending the Tenth and Rockford St. church. This church often sent speakers out to nearby churches that did not have regular preaching, and one Sunday Harold was sent on one of these missions and thus he "preached his first sermon". Vashti does not know the name of this place, but that summer he was used in several of these speaking trips. When he returned to Stillwater for his final year at O. S. U., he had decided that he would be a preacher and was able to have regular appointments with the Church in Perry that winter. While in O.S. U. he came in contact with another person, Wilburn Hill, who had a great influence for good upon his life. Brother Hill was a graduate of Oklahoma Christian College at Cordell and of Abilene Christian University. He loved the Lord, young people, and did a great work while he was in Stillwater. He was responsible for the beginning of several young men in the ministry who have made fine records, including Jay Cannell, Chester Hill, Elton and Harlan Dilbeck along with Harold McColum. There were others, but these come readily to mind, and I never knew about all of them.

When Harold graduated from O. S. U. in the summer of 1940 he immediately went to work with the Church in Okmulgee, Oklahoma, though he had a degree in a technical field that would probably have provided a better living. He had come to love the Lord and was determined to give his life to the teaching of the Word. He was a tireless worker, very energetic, very capable, and began to accomplish much in the Kingdom. His preaching work took him from Okmulgee to Brownfield, Ill., then to Iowa Park and Breckenridge in Texas. Then he went to Durango, Colorado, a mission field, and while in that state also preached in Bayfield. He returned to Texas, preaching in McLean, Tulia, Dimmitt, and Hart.

His determination to preach Christ caused him to give freely of his own physical strength as well as his financial resources. This example caused many others to do more than they had ever done. He was instrumental in starting the Church in Durango and in . Holly, both in Colorado. Though most of his work was what we call "local work," he did conduct many meetings very successfully, and engaged in one debate with a Mr. Ed Guyon in Coolridge, Kansas on the subject of Miracles, Tongues, and the Godhead.

While in Durango, the Church built a new building, and Harold worked on the actual construction of it, and had done construction work at other times. At one period he sold life insurance to help support his growing family. In the last years of his life he lived in Dimmitt, Texas where he worked for a time with the Church, and then began the business of constructing meeting houses for our people, and preaching for the Church in nearby Hart. This was the program to the end of his relatively short life. Somewhere along the line he had learned to fly and kept his own plane to help with his construction business, and so he could get home on week-ends for his appointment in Hart. He maintained a constant dedication to the preaching of the gospel, and often did “mission” preaching himself and always supported such work by others. In the years he preached at Hart, his influence caused that small church to be involved financially to a greater extent than the average church many times it's size. He could do this because he himself set an example of very generous giving of his money.

In 1967 I made my first trip to India, and Harold and others at Hart became interested in the Indian field. Following that first trip we were led to believe we could get long term visas for work in lndia, so the Hart church agreed to sponsor me there and to provide all my personal income. I raised the necessary funds for travel and a work fund, and then the visa was denied. J. C. Bailey had recommended Allen Jacobs to the brotherhood as being a Canadian preacher worthy of such support, so the preparation we had made at Hart was turned to Brother Jacobs and he went to India. He stayed m India several years, and upon his return spent several months with the brethren at Hart before going to a mission point near Vancouver, B. C. in Canada. Hart helped with his support there. He was anxious for the Hart brethren to visit him in Canada, and on October 17, 1972, Brother McColum, C. C. Hanes, Mart Booe, and J. C. Jackson (the last three were the elders of the Hart church) left Dimmitt in Harold's plane to visit Brother Jacobs. They spent the first night in Cortez, Colorado with Harold’s parents. The next morning they continued their journey, intending to attend mid-week services at a small place in Washington where they thought they might help support the preaching of the gospel: The weather turned bad and they crashed on Blue Ridge Mountain about six miles Southwest of Monticello, Utah. All were lost. In spite of a vast search for them, they could not be found. A year and two days later some deer hunters walked upon the wreckage. It was so cold at that high altitude that the bodies were in reasonably good condition. Even after they knew where the plane was, the trees were so thick it could not be seen from the air, explaining why they had been unable to find them at the first. Apparently, all four of them had died instantly. The bodies were brought out for burial, the plane is still there. A memorial service had been held for all four of them on November 5, 1972 in the Hart school building in which the entire community participated. The speakers were: Joe Brooks, Richard Pectol, Cline Paden, Morgan Sturgess, and Jack Mackey, who with his wife, was a victim of a similar accident a few years later. When the bodies were returned to Hart, the three elders were buried in the Hart cemetery, with B. B. Harding and Morgan Sturgess conducting the graveside service. Harold's body was taken to Abilene, where graveside services were conducted by Overton Faubus and Gary Montgomery, Harold's son in law.

The loss of these four men was a severe loss to the Hart church and to the whole community, for all of them were active in business and in community affairs. Each left his wife and several children. It is hard to understand such things, but the Lord knows. All were faithful Christians and so the Christian hope sustains. C. C. Hanes was the husband of Lula Mae, my wife's youngest sister. Since he had been in the family we had all come to love him very dearly, and so it was a very sad thing for our family, as well as the others.

Harold McColum was an unusual man in many ways. His almost unlimited energy was used totally in the advancement of the Lord's Kingdom. He was able to inspire great dedication in others, for such dedication could be easily seen in his life. He was sound in the faith of the Lord and had no patience for any form of false teaching. Vashti, his lovely wife, moved to Abilene, where she still lives and is connected with Abilene Christian University, along with her brother, Brother Hilton, who has long been connected with the school. Of course you will send a prayer to the Lord for the well-being of the McColum family, and the others so tragically scarred by this sad event. May His continued blessings be upon Harold's family, along with the other families who have suffered such great loss. "Blessed are the dead who die in the Lord .from henceforth ... " surely is a promise for Harold and those lost with him.

Loyd L. Smith, Hart, Texas, Oclober 22: "Late Saturday afternoon, October 20, some deer hunters found the wreckage of the plane bearing the bodies of Harold McColum, Marl Boc. C. C. Hanes. and J. C. Jackson. On October 18, 1972 this plane was lost and even though a wide-spread search was made, it was not located. The hunters found it In some trees near the lop of a mountain a short distance from Monticello, Utah. Trees lIad fallen on it, and It would not have been visible from the air. Brother McColum was the preacher for the Hart church, the others were the elders. They were enroute to visit some mission work in Washington and Canada. The bodies will be returned here today. Brother McColum wlll be buried at Abilene, the others, here."

Directions To The Grave Of Harold D. McColum

Harold McColum is buried in the old Cedar Hill Cemetery in north Abilene, Texas. Take I-20 to Texas Exit 290 and head south toward Abilene on Jake Roberts Fwy. Almost immediately you will turn right on E. North 10th St. Go about a mile and the cemetery will be on the right and left. Enter on the right into the Cedar Hill Cemetery. After entering the cemetery. Take a right and go to the second drive to the left. After going through the first cross-road. Begin looking on the right. The McColum monument will be almost against the road facing you. 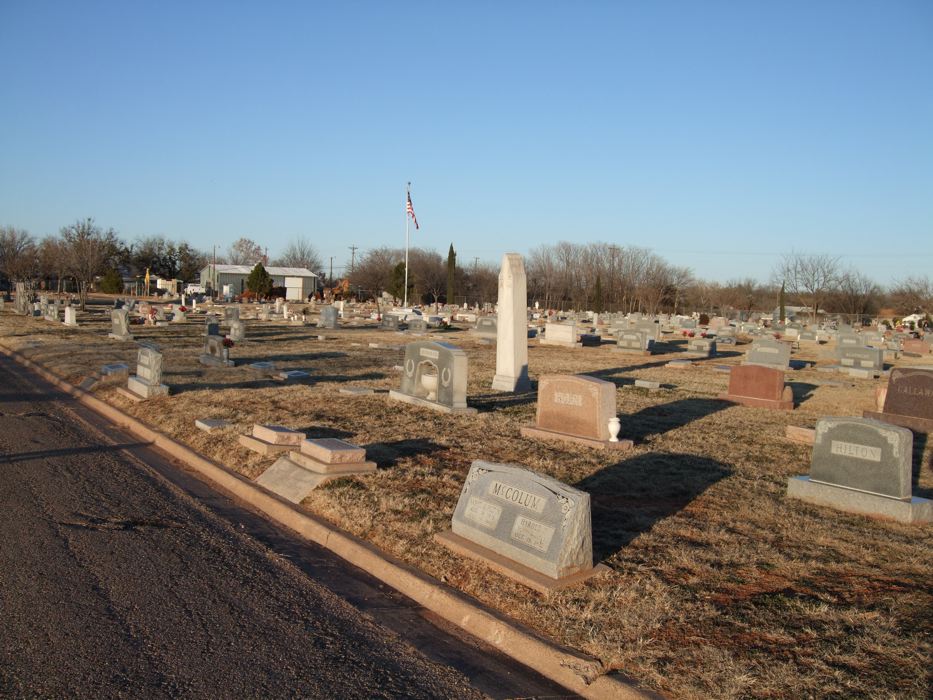 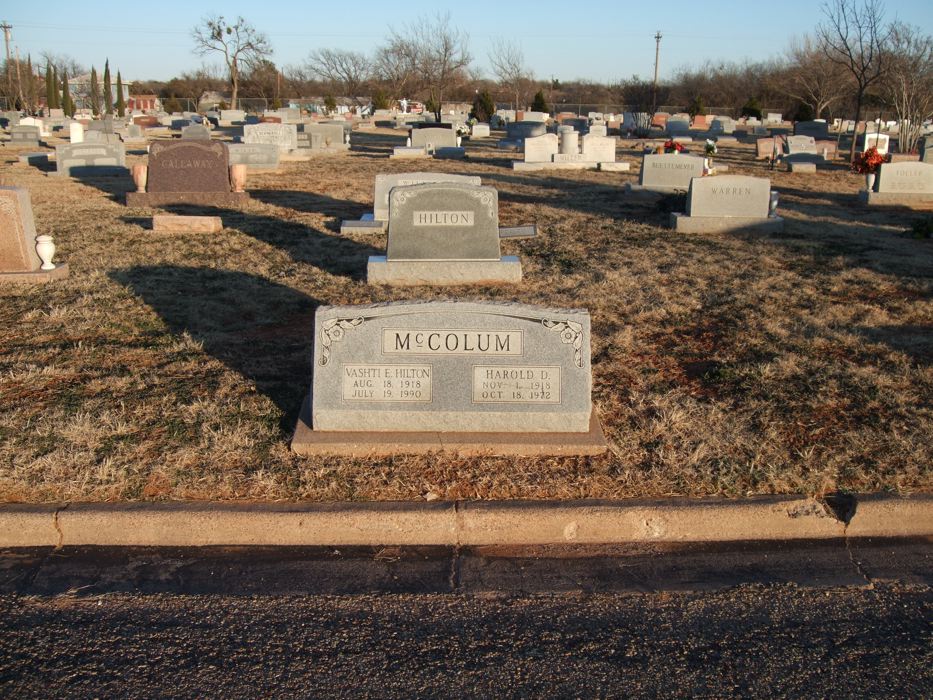 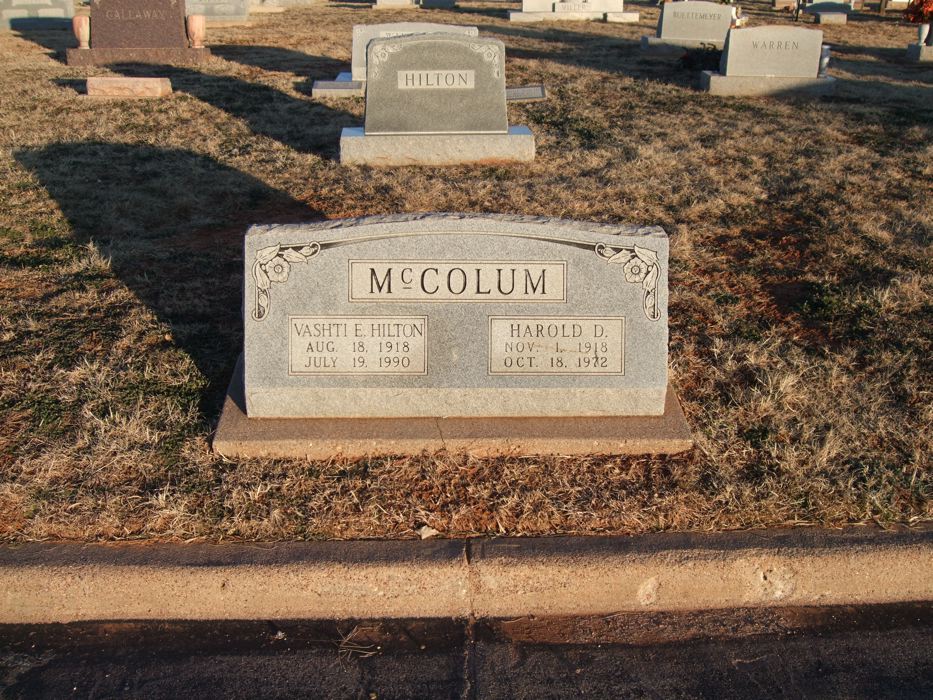 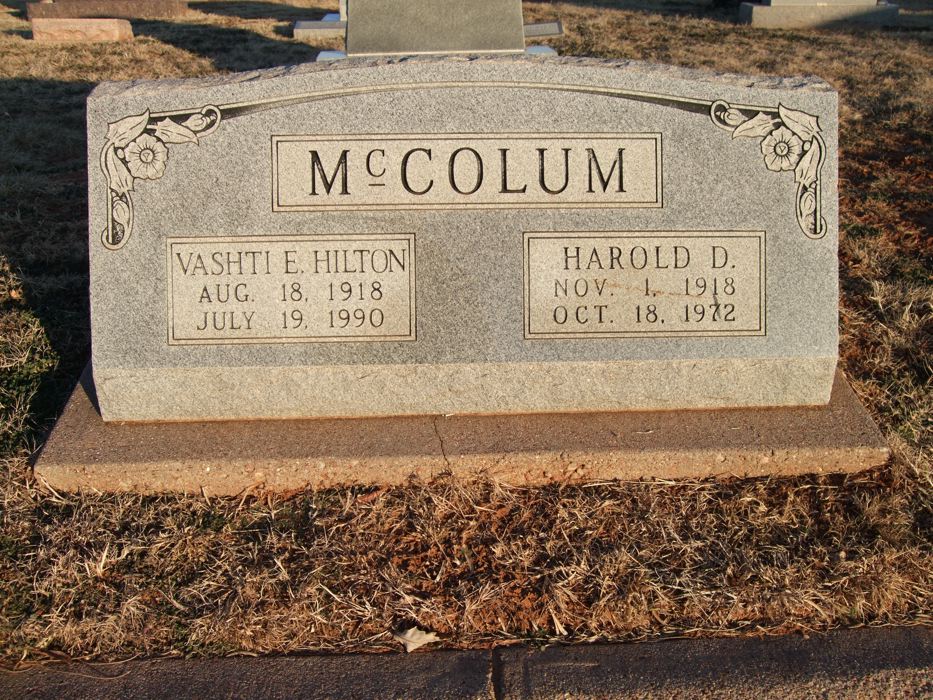