Early Preacher Of The Gospel In Dallas, Texas

He came to Texas in December 1844 with the Peter's Colony and is credited with preaching the first sermon in Dallas County. His family was one of the first 5 or 6 families to settle in Dallas. He was a Campbellite preacher (Disciples of Christ minister) and he founded the Christian Church of Dallas in 1845 with 12 members. In 1873 this church was divided into two groups: the Pearl and Main Street Church of Christ and another group that developed into the Central Christian Church.

In 1846, he chaired the meeting that formed Dallas County. He was later elected as the first Chief Justice of the Dallas County Commissioner's Court. He was also a farmer and he owned the first "tread-mill" (grist mill powered by mules) in Dallas. He was president of the first county fair in Dallas; this fair went on to become the State Fair of Texas. He is also a charter member of the Dallas County Pioneers Association, organized in 1875, for which he served as the first Chaplain. Amon and his wife Mary raised several of their grandchildren (due to the premature deaths of some of their own children: James B. McCommas, Rosanna Cox and Armilda Fleeman). McCommas Boulevard in Dallas was named for Amon McCommas and his family.

The Patriarch of the McCommas clan, Elder Amon McCommas, brought to Dallas by the Peters Colony as one of the first white settlers of the community, was a preacher of the Christian Church. This dedicated follower of the Rev. Alexander Campbell is credited with having preached, almost immediately after he arrived in December 1844, the first sermon ever delivered in the hamlet of Dallas. Elder McCommas settled on 640 acres of land five miles northeast of the point where John Neely Bryan had started his town of Dallas on the east bank of the Trinity River. There were only five or six other families located in Dallas then.

Elder McCommas was a prosperous forty-two-year-old farmer living in Wright County, Missouri, when he decided in 1844 to move to the northern frontier of Texas. Indicative of his worldly wealth was the fact that he was able to bring several teams of oxen with him, as well as a number of fine horses, blooded cattle, and sheep. He was also accompanied by his family of nine children, most of whom were grown, and his wife, the former Mary Brumphield, whom he had married in Ohio in 1826.

In addition to his ministerial work, the senior McCommas had long played a prominent part in the economic and social life of the communities in which he had lived in Ohio, Illinois, and Missouri. In Missouri he had been repeatedly elected a justice of the peace.

Elder McCommas quickly became a leader in farming and stock-raising in Dallas County, finding time also to take an active part in civic and political affairs. He served as chairman of the meeting held to organize Dallas County in 1845, and he was elected the first chief justice, or county judge, of the Commissioners Court of Dallas County. Amon McCommas, Sr. died in 1877 at seventy-three years of age.

Among his sons who took an important part in early Dallas affairs was Amon McCommas, Jr., who had been born in Illinois in 1832. He caught the gold fever in 1853 and went overland to California, returning to Dallas only after an absence of thirteen years. He then engaged in farming, and became a partner with his father in a mercantile house in Scyene. He was postmaster of Scyene for eighteen years-from 1871 until 1889. A breeder of fine horses, he owned "Lonnie Bee," who won second money in the Texas Derby of 1890.

Another son of Elder McCommas long active in Dallas affairs was Elisha McCommas, born in Ohio in 1830. In August, 1849, he was one of eighty men from Dallas and North Texas on a gold-hunting expedition to the Wichita Mountains. They found no gold but had a number of interesting and surprisingly friendly encounters with the Indians of northern Texas and Oklahoma.

During the Civil War, Elisha McCommas in 1862 volunteered in Company B, 19th Texas Cavalry, which was commanded by Col. Nat M. Burford of Dallas. This outfit saw service in Arkansas, Missouri, and Louisiana. McCommas was with Marmaduke’s expedition into Missouri and in the Red River campaign later. At the end of the war Elisha McCommas returned to his farm in Dallas County.

The important role of the McCommas family in the development of greater Dallas is marked in various ways. McCommas Avenue is a major traffic connection from North Central Expressway to the White Rock area, paralleling Mockingbird Lane from the vicinity of the Park Cities to the residential expansion of Northeast Dallas around White Rock Lake.

Directions To The Grave Of Ammon McCommas

Ammon McCommas is buried in the Cox Cemetery in the NE section of central Dallas, Texas, just west of White Rock Lake. From Downtown Dallas take the North Central Expressway (Hwy. 75) north to exit 3 (E. Mockingbird Lane.) and head east. Turn right on Hillgreen Drive. It will dead into W. Lawther Drive. Go right .1 mile and then the first right on Dalgreen Road. Go less that .1 miles SW on Dalgreen Road. The cemetery is on the north side of the road.
Note: This is a gated and locked cemetery. As of yet, it is not clear as to who has the keys to get access. The photos below were taken from outside the cemetery. 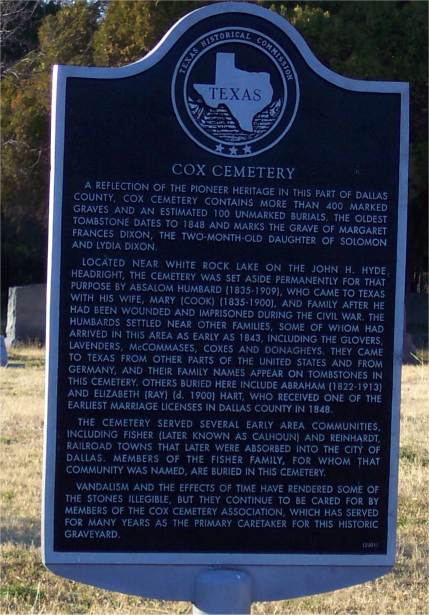 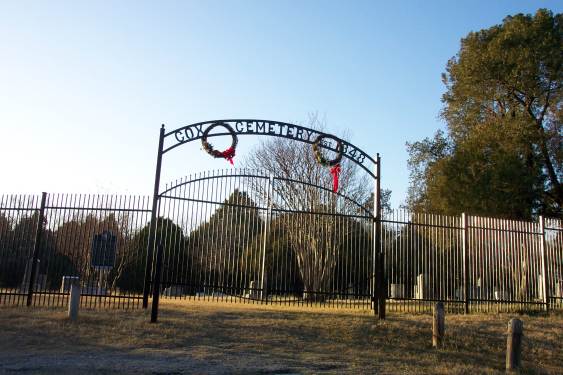 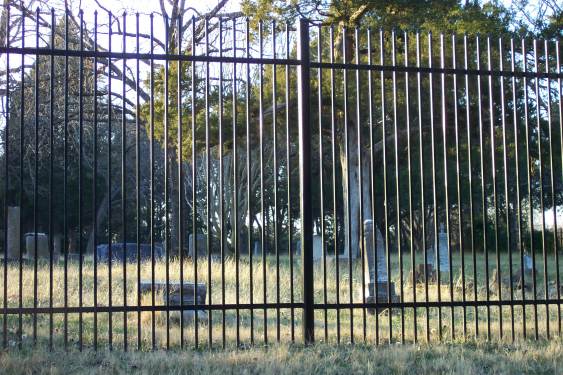 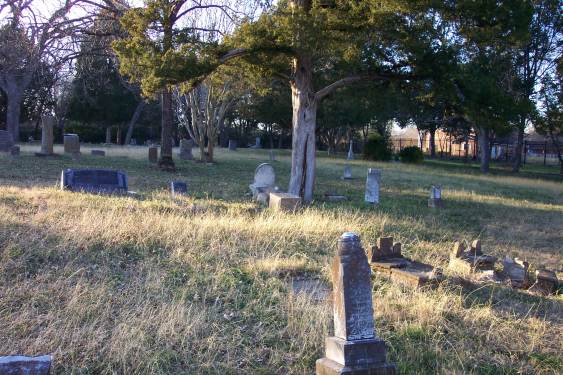 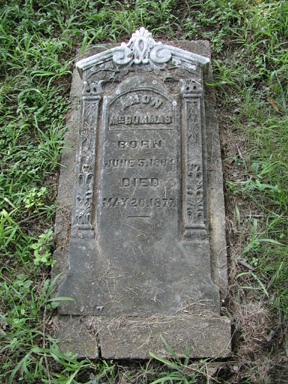 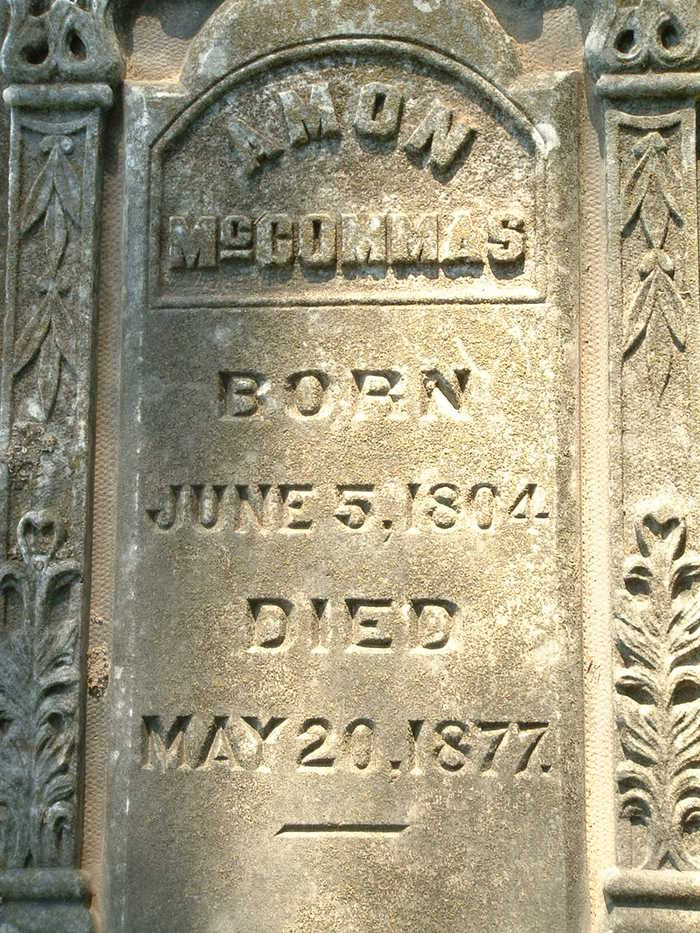