Luther Norman was born November 25, 1881 in Obion County, Tennessee. He moved to Texas with his father in April, 1896. He was educated in the public schools in Tennessee and Texas. He attended Lockney Christian College for three years.

He began preaching in October, 1903, and was active in the work of the Lord all his life. Several hundred people were lead to Christ through his evangelistic efforts.

Brother Norman passed from this life September 10, 1974 and is buried in Austin, Texas in the Austin Memorial Park Cemetery.

-Gleanings From Gospel Preachers Who Blazed The Trail, C.R. Nichol,

Another Sketch On The Life Of Luther 0. Norman

Luther O. Norman was born November 25, 1881, in Obion County, Tennessee. He was the son of Thomas Jefferson and Elizabeth (Forester) Norman. The family moved from Tennessee to Texas where he spent the rest of his life and by his faithfulness made his place secure in the history of the Lord's church in Texas.

He was baptized by Baxter Golightly in 1897.

Norman began preaching in October of 1903 at San Marcos, Texas.

Some of the churches where he served as full-time minister were: Hamilton, Texas, 1942-47; Whorton, Texas, 1948-51; Hondo, Texas, 1954-58; Austin, Texas; Gonzales, Texas; Winters, Texas, and other places. Norman contributed articles to the Gospel Advocate and the Firm Foundation.

He served as superintendent of several schools and was principal of several including Elgin, McDade, and several rural schools.

He was among the early preachers who "blazed the trail," but was not involved in what we now call "mission work."

He made his first talk in behalf of the gospel at the age of 17 in 1899, and preached his last sermon in the summer of 1974. Thus he proclaimed the message of Christ longer than many of us expect to live, 75 years.

He was well over 80 when he did his last located work, and helped the church to build a new building. He continued to teach and preach after he retired from local work, and preached both morning and evening services at Glenrose, Texas, in the summer of 1974, just a few weeks before his death.

He never sought to be a "big name" preacher. He just quietly and humbly went about establishing churches, preaching, leading singing in meetings and holding meetings, baptizing many and encouraging many over the years throughout much of the state of Texas.

Luther 0. Norman died September 10, 1974, at Glen Rose, Texas. He was survived by his wife, Alma Rimmer, one son, Albert Wilford, and by one brother, Fred Norman.

Directions To The Grave Of Luther Norman

Luther Norman is buried in the Austin Memorial Park Cemetery in Austin, Texas. The address of the cemetery is 2800 Hancock Drive, Austin, Texas 78731. On I-35, north of downtown Austin, take Exit 239 and head west on Hwy. 2222 (E. Koenig Lane) and travel about three miles. The road will become Northland Dr. Turn left on Shoal Creek Blvd. The cemetery will be to your right. Go until you can turn left on Hancock Dr. Enter the cemetery and the section will be very soon after entering on your left. The grave is a good bit back and close to the fence. See pictures below to get an idea. The Norman plot is very near G.H.P. Showalter's plot. 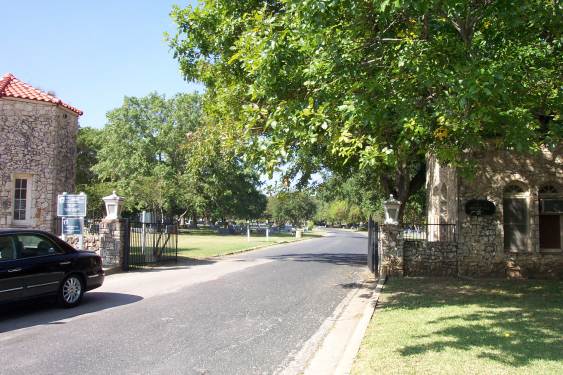 
Boxed In On Left Is Norman Plot, On Right Is The Showalter Plot

Norman Plot From The Showalter Plot

Norman Plot In The Foreground, Showalter Plot Blocked In Background