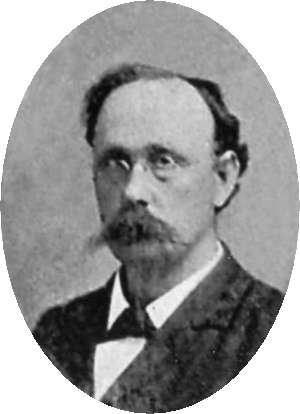 Biographical Sketch On The Life Of Ephraim H. Rodgers*

Many lessons are learned from the biography of men who have served their fellow men and glorified God in their lives. There are many types of good men. No two are alike, and no two have had identically the same experiences; no two seldom ever solve life's problems in the same way. Different sets of circumstances call for different solutions. The field of biography is broad enough and has such a variety of men that we can learn some new lessons from each one.

Ephraim H. Rodgers was born near Pikeville, Tenn., on March 15, 1850. He was the son of Thomas Jefferson and Adaline (Carder) Rodgers. He came of a very prolific family. He had three sisters and six brothers; he had a twin brother. His grandfather, William Rodgers, had a large family of fourteen children-four girls and ten boys. Seven of William Rodgers' brothers became Methodist preachers. William Rodgers tried earnestly to "get religion" at the "mourners' bench," but was unsuccessful; however, he was finally taken into the Methodist Church on " six months' probation." During his period of probation he walked eight miles to Pikeville, Tenn., with a basket of eggs, which he sold for enough money to purchase a New Testament. He and his wife began reading the New Testament to learn God's will. It seems strange at this age for one to belong to a church when he has never read the New Testament; however, there are many today who are in different churches who have not read the New Testament to know what God would have them do. Thousands of people are in churches today who have not thought of searching the Scriptures to see whether God has taught them to go into that church.

William Rodgers, the grandfather of Ephraim, read the New Testament, and soon learned his duty. He saw that God had not revealed anything in his Book about the Methodist Church. He at once became indifferent toward the Methodist Church and began to give Scriptural reasons for his lack of interest in it. By the time that his period of probation was up, he was ready to quit the Methodist Church. His friends and brothers thought that he had failed to " get religion," and that the Methodist Church had made a mistake in taking him in, even on " probation." When he quit the Methodist Church, unpleasant relations sprang up between him and the other members of his family. He moved with his family from near Pikeville to Warren County, Tenn. He lived on Rocky River seven years; he operated a grist mill and sawmill about eight miles from McMinnville; he next moved to Van Buren County, Tenn. Here he purchased some timber land. This was at the beginning of the Civil War. He read the New Testament, and came to the conclusion that God's people should not take up arms and wage carnal warfare. He was severely persecuted because of this stand, and he left his property without realizing a dollar for it. He next went to White County, Tenn., and lived a short time near Sparta. His next move was to Smith County, Tenn., and then to Wilson County, Tenn., where he settled for life on a farm not very far from Lebanon. 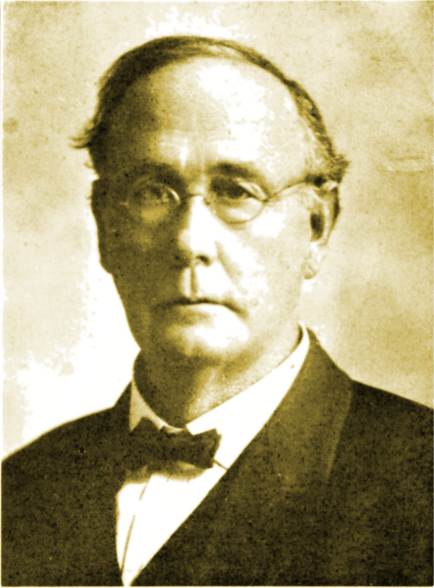 Ephraim H. Rodgers was deeply impressed with the strong convictions of his grandfather, and shared with him the same sentiments. He learned the truth as revealed in the Bible from his father and from reading the Bible. In 1869 he obeyed the gospel at Bellwood, Tenn., the home congregation of the lamented E. A. Elam. Old Brother W. C. Huffman was preaching there at that time and baptized young Rodgers. Young Rodgers had gone to school but little. His father had moved about so much that he had no opportunity for a classical education; however, he was interested in self-improvement. He ate no idle bread, but read everything that he could get. There were not many books in that country at that time and the few books that he could borrow were good books; hence he obtained a splendid practical education. Ephraim Rodgers attended church and heard all the preaching that was done in his community. He did not mind walking four or five miles to church to hear a sermon.

About eight years after his baptism he became involved in a controversy with a Baptist preacher. This resulted in a public debate, and was the first public effort at preaching the gospel. There was a need for gospel preaching in that county, as there were few preachers and many communities anxious to hear the truth. Brother Rodgers soon began to make talks at prayer meeting and preach in schoolhouses on Sunday afternoons. The churches at Philadelphia and Bellwood encouraged him to preach and to go to school and improve his education. He soon left the farm and entered school to prepare himself better for the work of preaching the gospel. For eight years he preached in the hills of Tennessee and Kentucky. At that time the people were not taught to support the gospel, and a preacher had to sacrifice much.

In order to support his family and to preach. He had a strong mind and a great determination to preach the gospel. He labored much with Brother W. H. Carter; they were great friends and encouraged each other much.

In 1886 he moved to Texas and devoted the remainder of his life to preaching the gospel in that State. He was married in Texas in 1888, while living at Collinsville. In 1883 his eyesight became impaired while he was in school. He was unable to read for twelve years, and regained his sight only sufficiently to read but a very little with one eye. He had a wonderful memory and could memorize the Scriptures readily with two or three readings. He preached mainly in the rural sections of Texas; he was a successful evangelist. Thousands obeyed the gospel under his preaching. He was a clear thinker and a forcible speaker. He was bold and fearless in attacking error and kind and pathetic in presenting the truth. He did not seek controversy, and yet he was frequently drawn into debates. He engaged in about seventy-five debates; these discussions covered a wide range of religious thought.

Ephraim Rodgers was a remarkable man. He labored under the disadvantage of a lack of education; he was almost blind and unable to read; he possessed but little of this world's goods; and yet, in spite of all of these difficulties and obstacles, he made a success in preaching the gospel and defending the truth. He sets the example for young men today. If Ephraim Rodgers, with all the serious handicaps could make a success, why cannot young men who are more favorably situated today? If they have the determination that Brother Rodgers had and the persistent perseverance, together with a consecrated life, they can succeed. Ephraim Rodgers has set the example of success. In addition to his other afflictions, for ten years he suffered with a tumor. Handicapped with poverty, very little classical education, impaired eyesight, for many years a large tumor, and family cares-all combined-did not daunt his spirit nor break his strong resolve to preach the gospel so long as he lived upon earth. He was a man of one book, the Bible, and he knew that one well.

Brother Rodgers died on July 18, 1922, in Sherman, Texas. All who knew him loved him and respected him. Few men did more for the cause of Christ in Texas. For forty years he was known as a gospel preacher in Texas.

-From Biographical Sketches Of Gospel Preachers, H. Leo Boles, Gospel Advocate Company, Nashville, Tennessee, 1932, pages 388-393
*"Rodgers" with a "d" is the way H. Leo Boles wrote his name, but "Rogers" without the "d" is probably more accurate. The "d" was kept in the article to capture the authenticity of the piece.

Directions To The Grave of Ephraim H. Rogers

E.H. Rogers is buried in the West Hill Cemetery in Sherman, Texas. Off Hwy. 75 in Sherman, take Exit 58, the Downtown Exit. Travel through the first light (W. Lamar St.{one-way east}) and go to next road, (W. Houston {one-way west}) and turn left. Go under the bridge, and as you do, look off to the left and you will see the cemetery in the distance on W. Lamar St. You will need to go up to S. Highland Street and then turn left. You should see the cemetery straight ahead. It is on W. Lamar St. Go straight into the cemetery at the main entrance and contine straight ahead toward the end of the cemetery. When you get as far as go can go, turn left. Go again as far as you can, then turn right. The road will bear around to the left (you will see houses outside the fence). Go to the end of the third section and turn left. Head up to the middle of the section. Look for a slight rise of the land on your left. At the top will be the Rogers family plot, about two rows into the section. 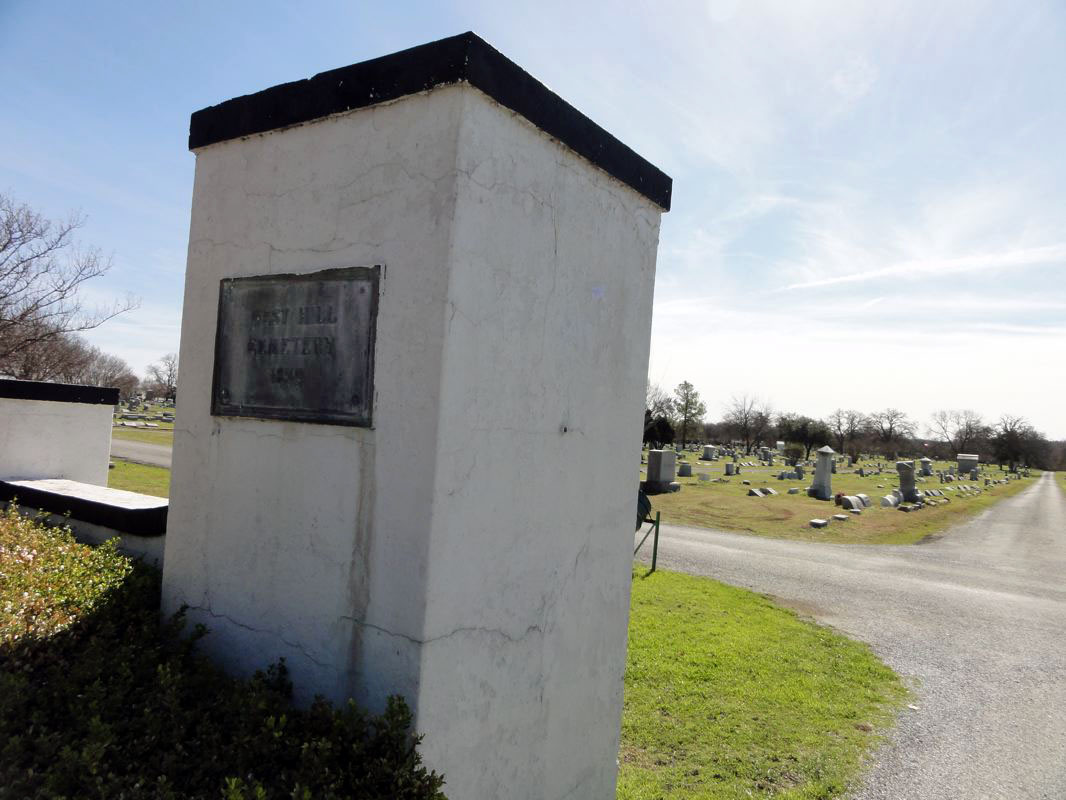 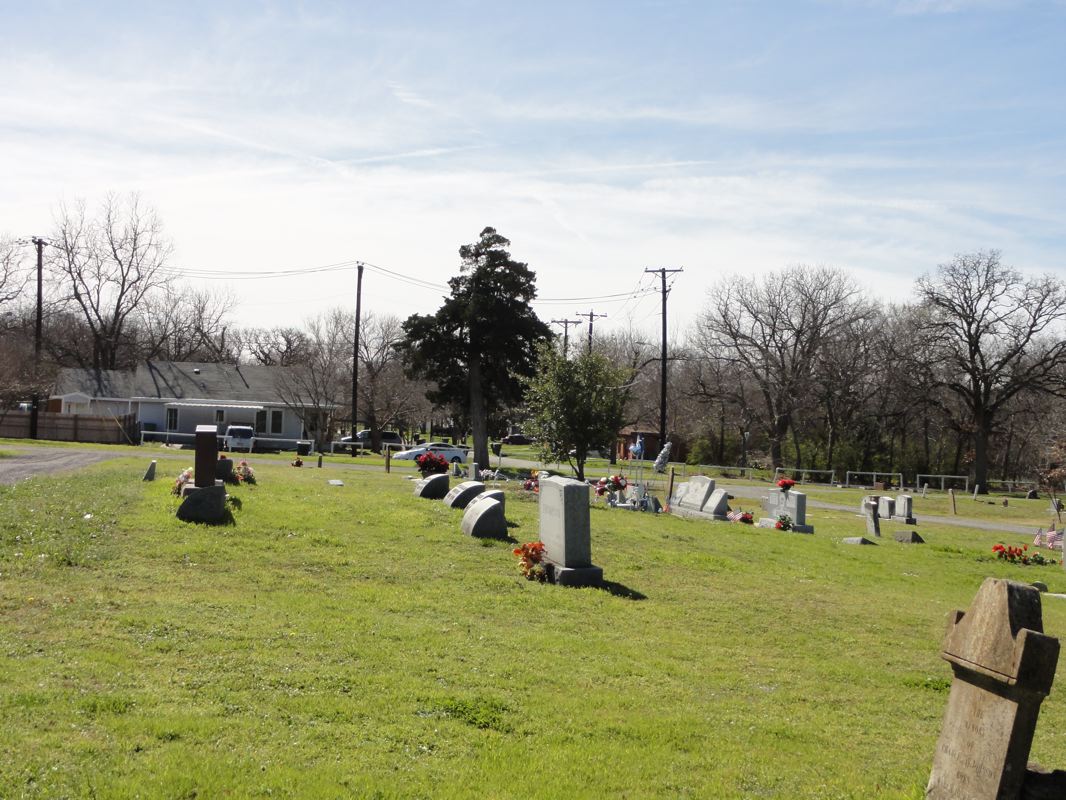 Looking from grave toward the south fence 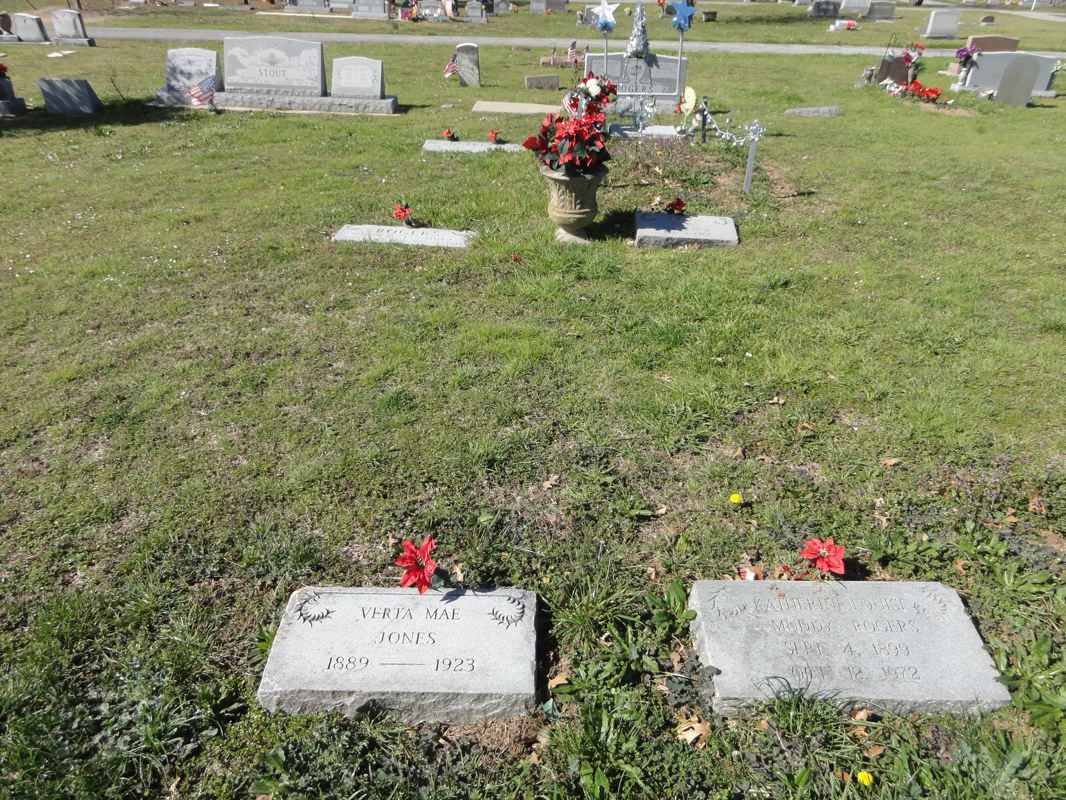 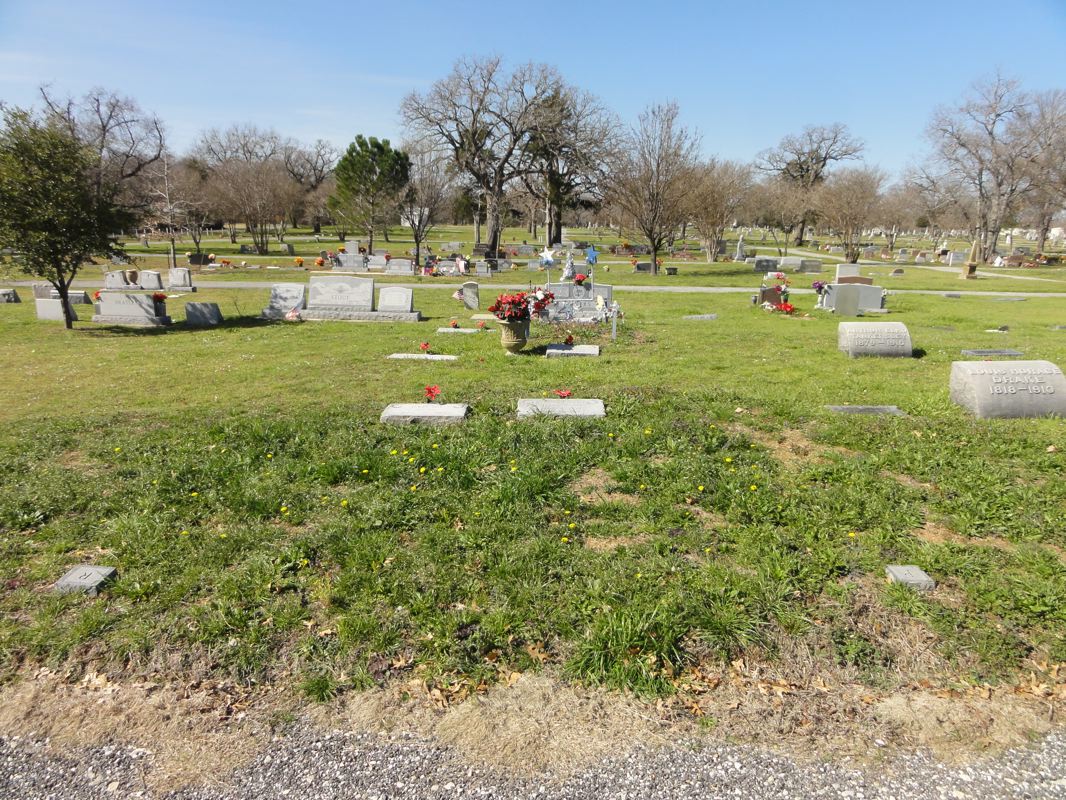 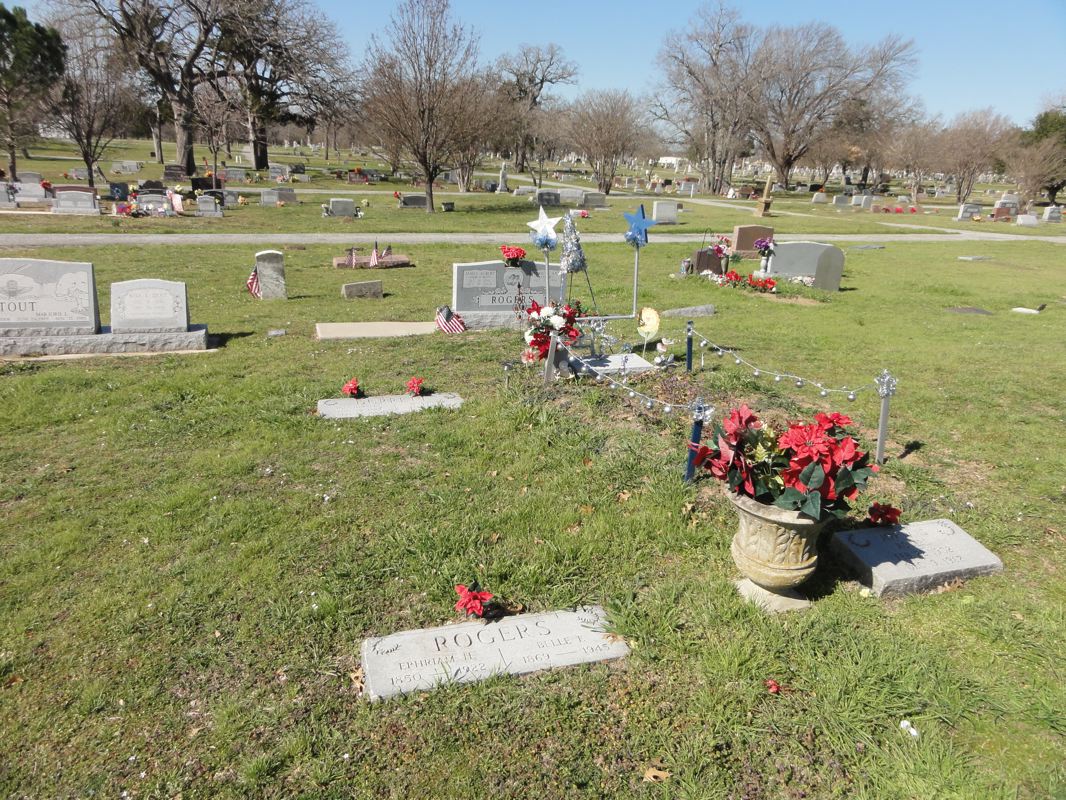 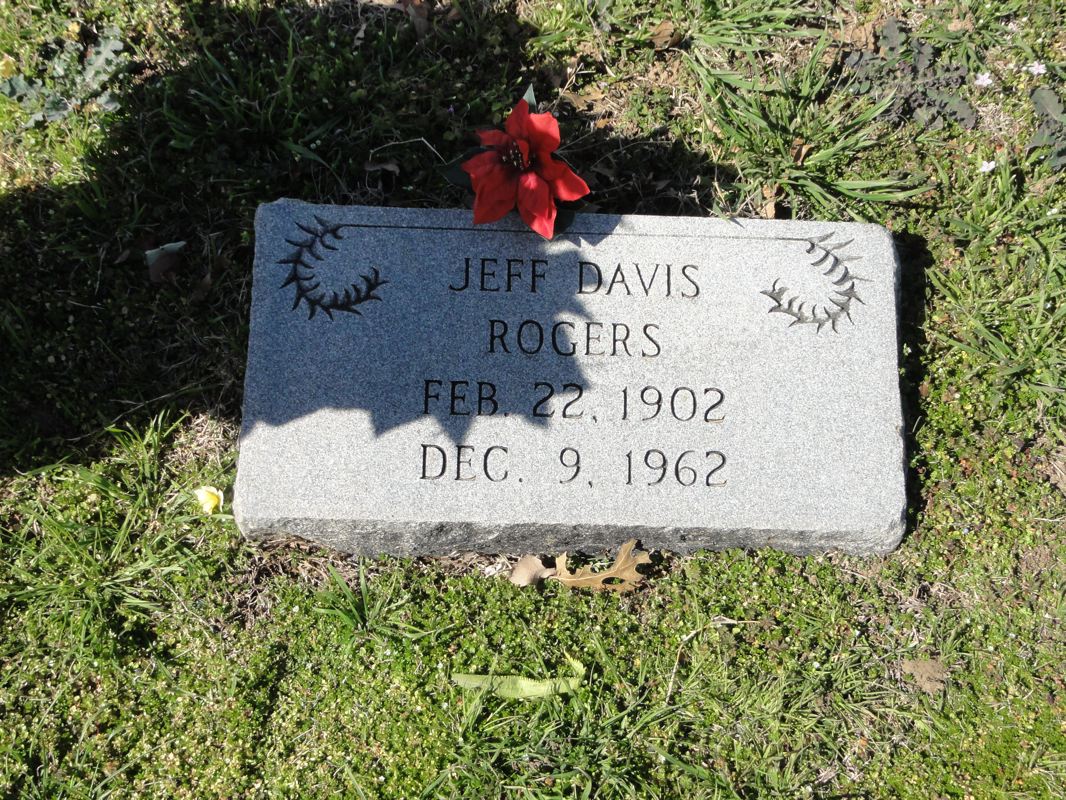 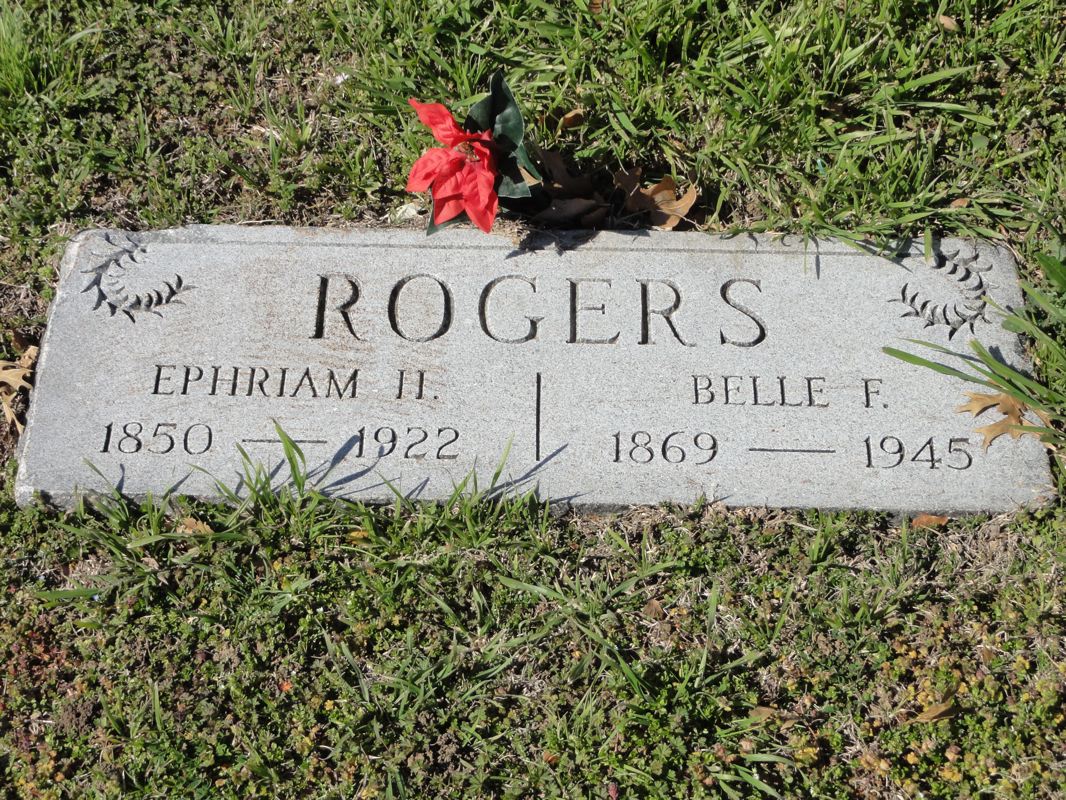 Web editor note: In February, 2012, it was my privilege to visit the grave of Ephraim H. Rogers. It was about my secord or third attempt to try to find the grave. Other occasions in the past when I visited Sherman, the office was always closed. One day I walked in this cemetery for three hours looking for the grave, but never found it. But, as had been invited to take part in the annual Affirming The Faith Lectureship in Oklahoma City, Oklahoma, I got into the area early, affording me the opportunity to put about 2000 miles on a rental car in order to locate graves of gospel preachers and church leaders of yesteryear in a wide area. My fourth day I was able to visit the grave of E.H. Rogers. Also buried in this cemetery is two more preachers, Willis Kreager and O.A. Carr. Perhaps there are others.