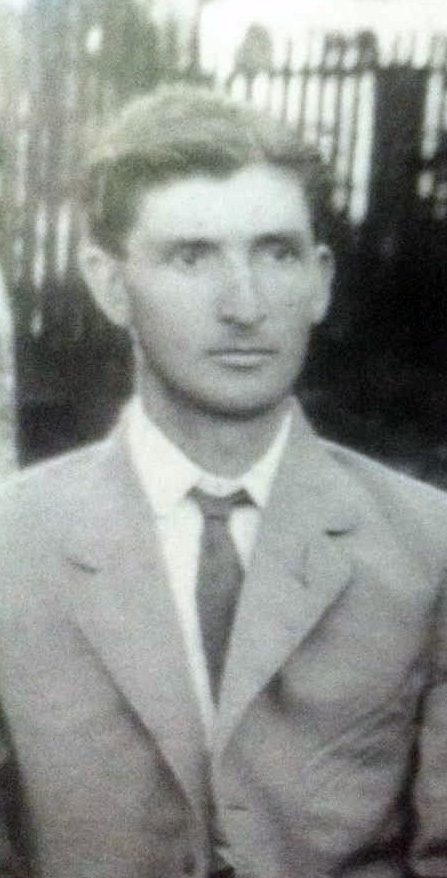 The Live of Elder Tim Walker

His World War I Draft Card listed him as a resident of Moulton, Lawrence County, Alabama, and his occupation was that of self-employed as a farmer. Having such a large family kept him from having to serve in the military. The family owned an 80-acre farm in Landersville, Alabama, when he decided to attend school at Alabama Christian College in Berry, Alabama. He attempted to sell the farm before departing for school but moved anyway, advertising the farm several months for sharecropping or sale. Finally it sold. He entered school at the beginning of 1920 and remained for a year.

The need for the gospel was great in Winston County, so the family moved to Haleyville on the I.C.C. railroad in 1921. There was a church of Christ there, and he worked to strengthen it and the churches in the area. As the church was poor and unable to sustain a preacher, he opened a hardware store in the northwest part of town. Called Walker’s Hardware Company, he worked for the next decade building a business as well as the church. In 1922, he planted a new work in the county seat of Double Springs. Preaching in the old court house that still stands, the church there thrives to this day as the Double Springs church of Christ.

Walker was a firm believer in utilizing the powers of advertisement. Many of his advertisements appeared in Haleyville’s local paper, The Advertiser Journal. Around Christmas, special promotions encouraged purchasing gifts from the local Walker Hardware Store. Some examples appear below.

News reports in the paper spoke of gospel meetings he conducted up in Spruce Pine in Franklin County, as far east as Lawrence County, and up near the Tennessee River around Decatur. He traveled to the west over into Mississippi, and back down in Fayette county as well.

After the stock market crash of 1929, in a relatively short time, the depression affected businesses across the nation. The Walker Hardware Company was in line for calamity, so Tim began trying to sell his buildings in August 1932. The family sold furniture and downsized, moving to West 21st Street in Haleyville in September.

The family moved to Amhurst, in far west Texas, just beyond Lubbock, sometime in the first part of 1934. Then in 1935, they lived in Anton, Texas, about twenty miles away. Then, in close-by Littlefield, Texas. By the 1950s, they were living in Dallas, Texas.

Lucy had a sister that lived back in Haleyville, so family trips back east took place occasionally. And even more, the continuous call for the elder brother Walker to return to his Alabama homeland to preach in gospel meetings.

The Walkers spent their final years in Dallas, Texas. Tim preached where he could, but their primary effort felt among the saints at the Page Street church of Christ where he served as an elder. But as with all those living, they too, felt the demise of their earthly pigrimage. Lucy passed away on August 25, 1963, and was buried in Laurel Land Cemetery in south Dallas. Tim was united with Lucy in death on March 27, 1967, in Irving, Texas, at the age of 82. Burial followed next to his wife. Thus came to an end, lives who made a difference in the world they entered. The borders of the Kingdom of their Christ spread throughout their generation, and they entered into their eternal reward in faith.

-Scott Harp, 01.02.2023
Note: Researching the life of Tim Walker is of personal significance to your web-editor, as he and his family contributed much to the building of the church of Christ in the town of my birth, Haleyville, Alabama. The first of my family to obey the simple gospel of Christ was my great-grandmother, Leona Turner. She was converted under the preaching of Charlie Wheeler. Undoubtedly, my great-grandparents would have known the Walkers before their departure for Texas. Only eternity will know the good that was accomplished by this good family.

“On January 1, 1921, I was called to old Cleveland church, five miles from Berry, Ala., to conduct funeral services, when the remains of Sister Garrison were lowered into the grave to awalt the judgment. From Berry I moved to Haleyville, Ala. During the year, I conducted two mission meetings, preaching to audiences that never before heard the true story of the cross; operated a sawmill to the extent of cutting fourteen million feet of lumber; traveled over fifteen hundred miles to preach the gospel; paid more than fifty dollars in cash for the cause of Christ; received one hundred and ten dollars and seventy-five cents, a balance of sixty dollars and seventy-five cents to support my family (wife and four children) made a crop: one hundred and fifty bushels of corn and one bale of cotton; and almost completed a six-room bungalow house. I hope to go farther and preach more in 1922 than ever before. Brethren, do not be discouraged at this and other reports coming from Alabama. We have some very godly men and women in Alabama. Alabama has about three and one-half million people, only seventy-four white preachers, five colored ones, that stand for apostolic worship. Alabama stands as the third cotton state in the Union; some of the greatest railroads in the United States are in Alabama; the greatest coal fields in the South are in Southern Alabama. There are scores of cotton mills, and the greatest iron works in the South are found in Alabama. A number of other good things could be said, but this is sufficient at present. Alabama is a fertile field for the gospel. Preacher, will you please pitch your tent this way and help evangelize this great State and build up the church of God?” 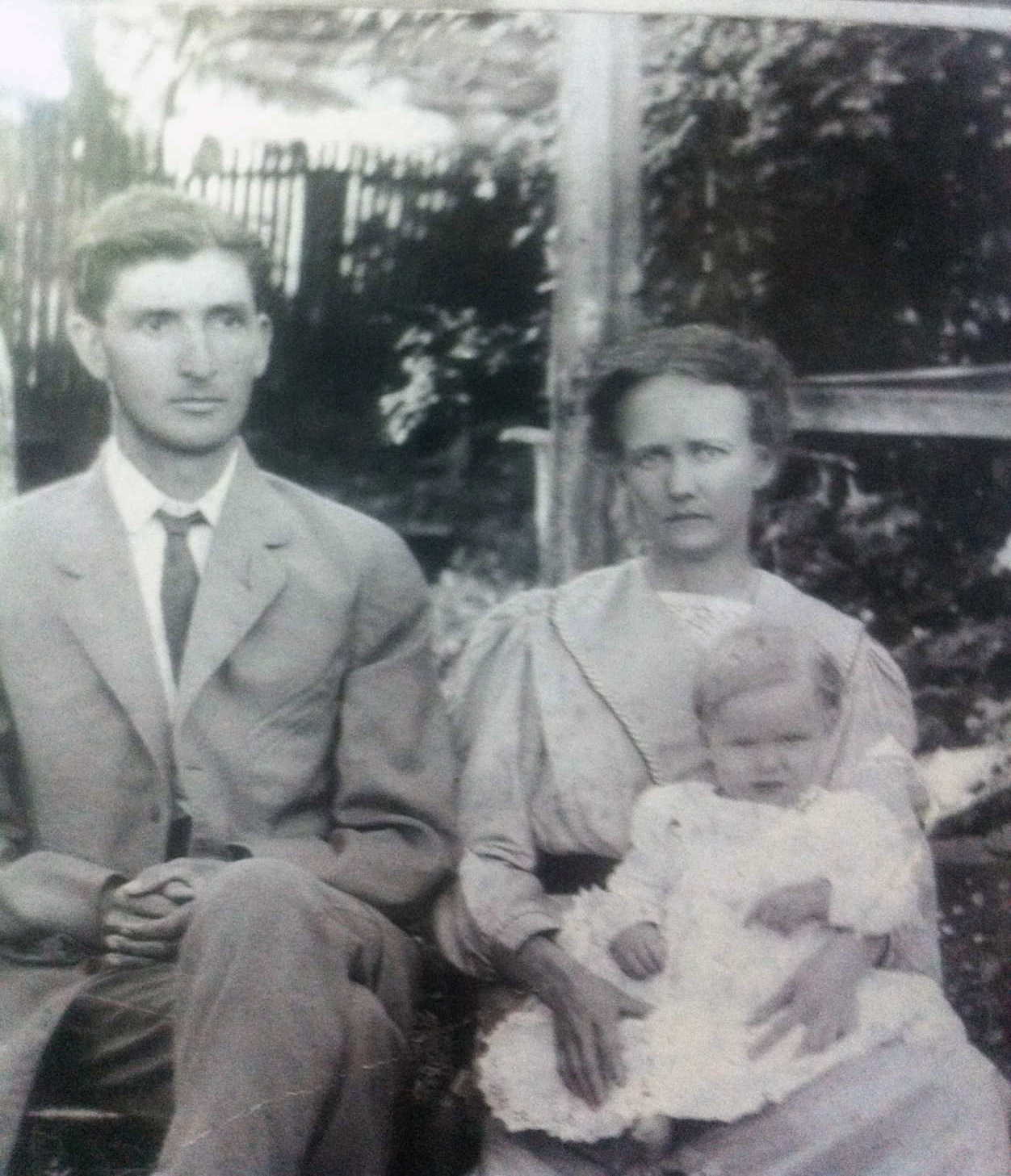 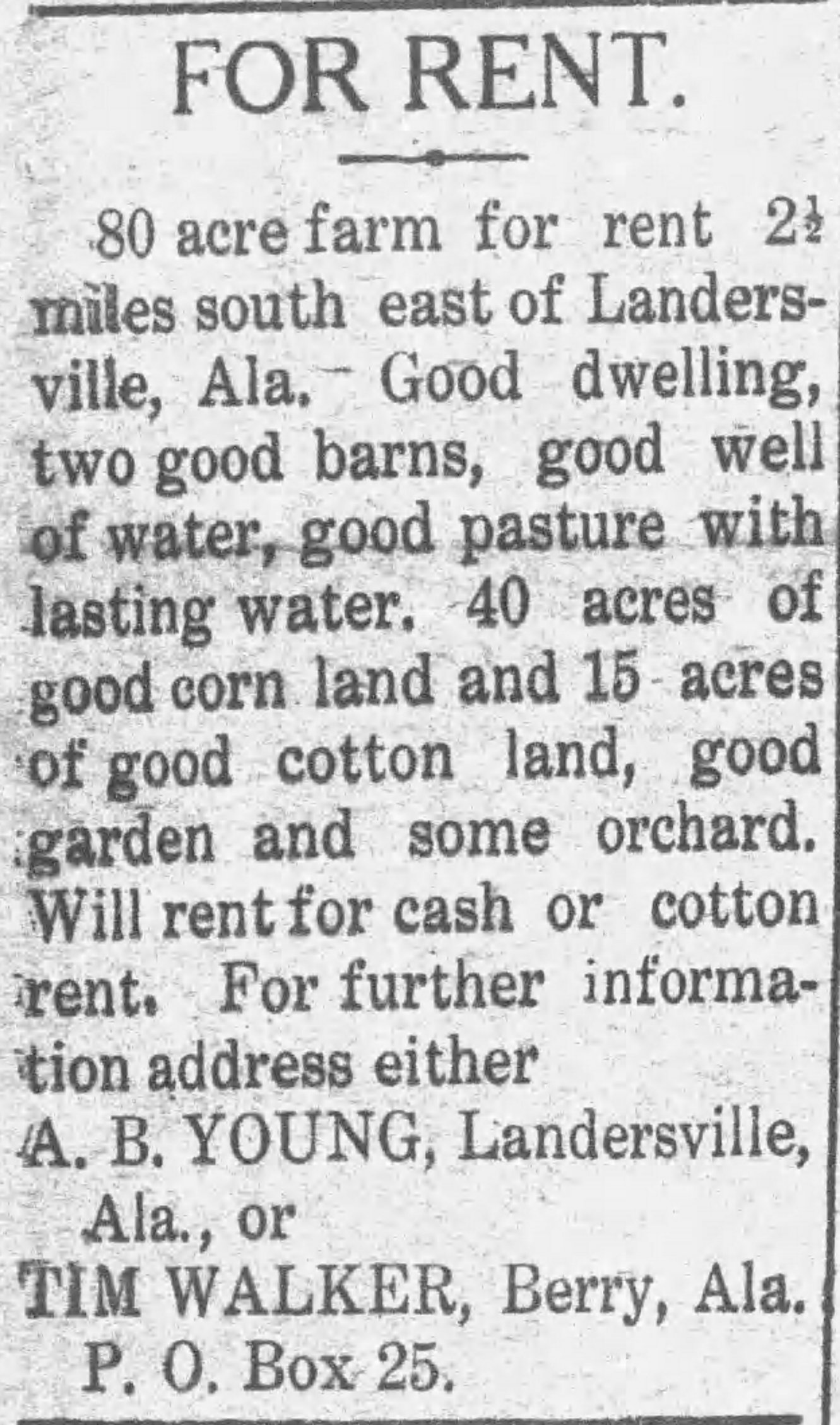 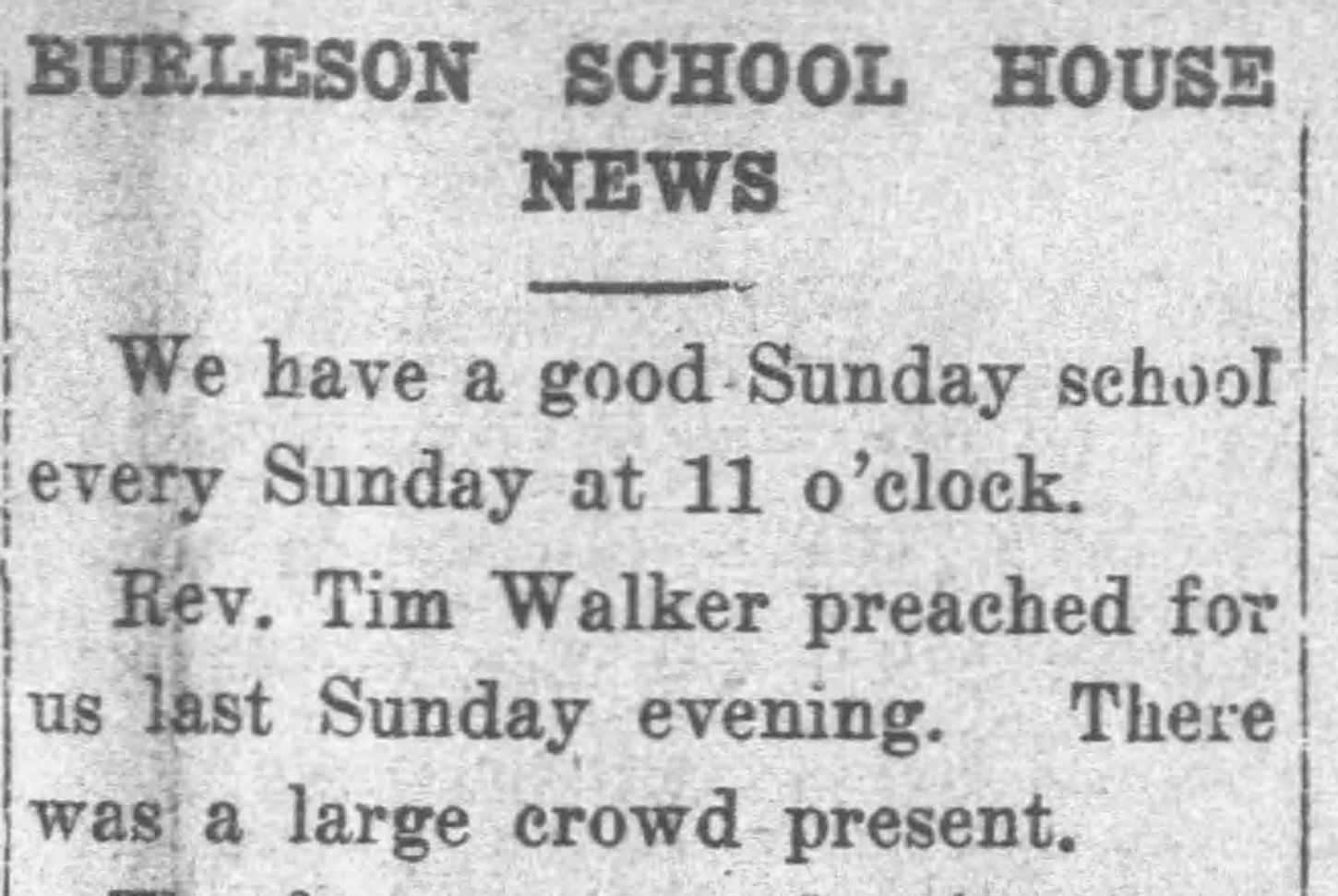 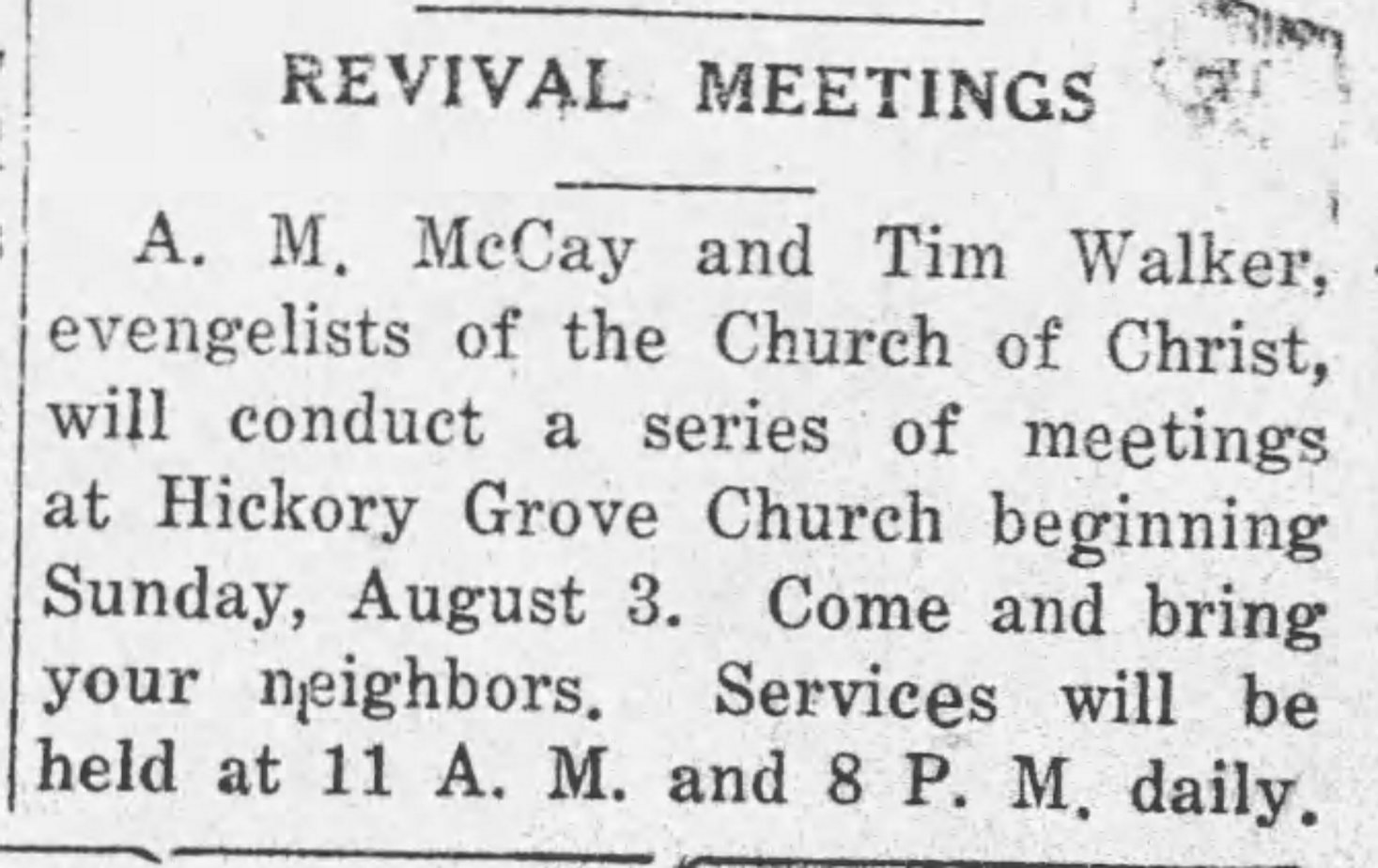 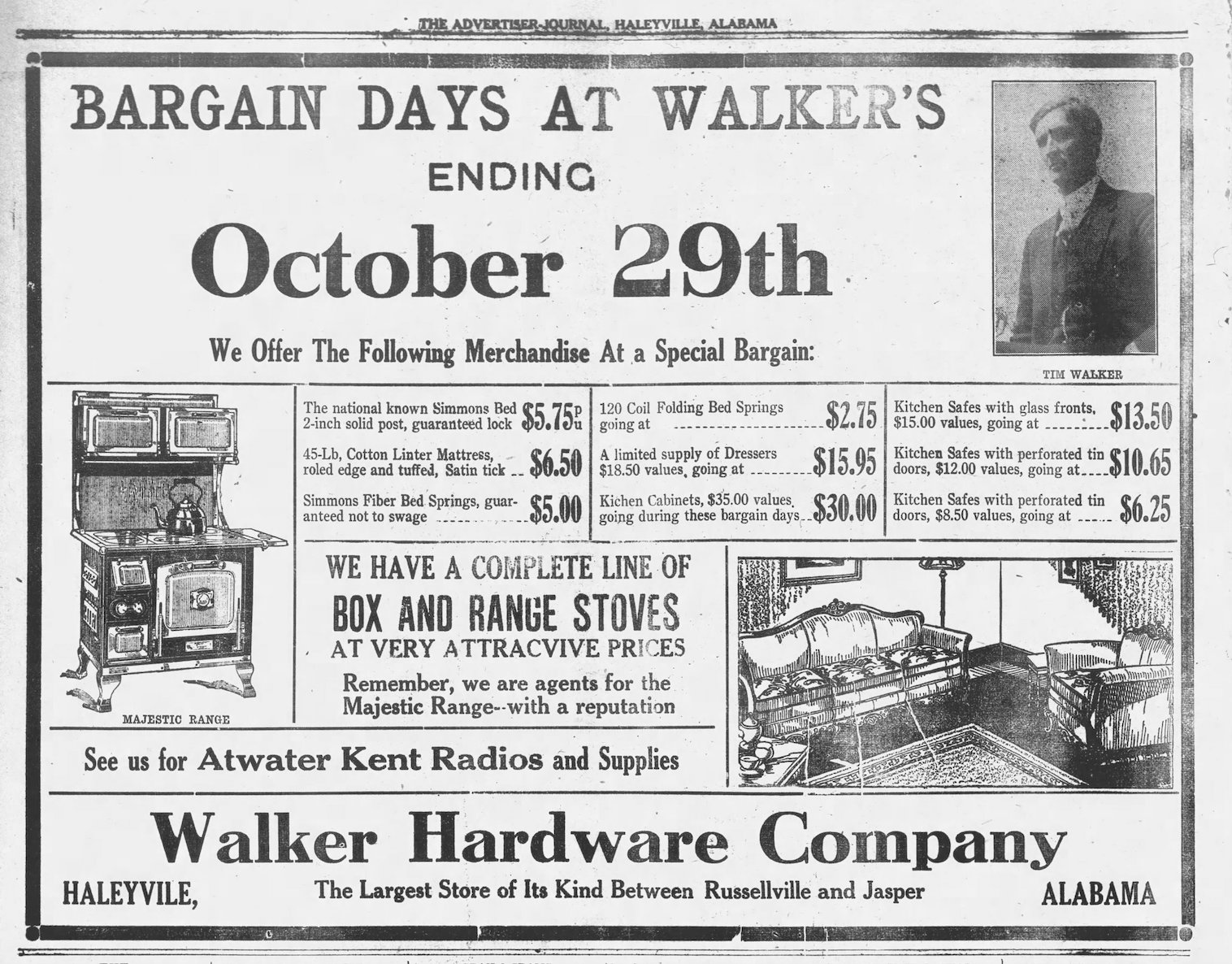 Tim Walker Featured With Other Volunteer Firefighters in 1927
Featured in a "25 Years Ago" Column in Haleyville's Newpaper in 1952
Tim is the man standing on the running board. 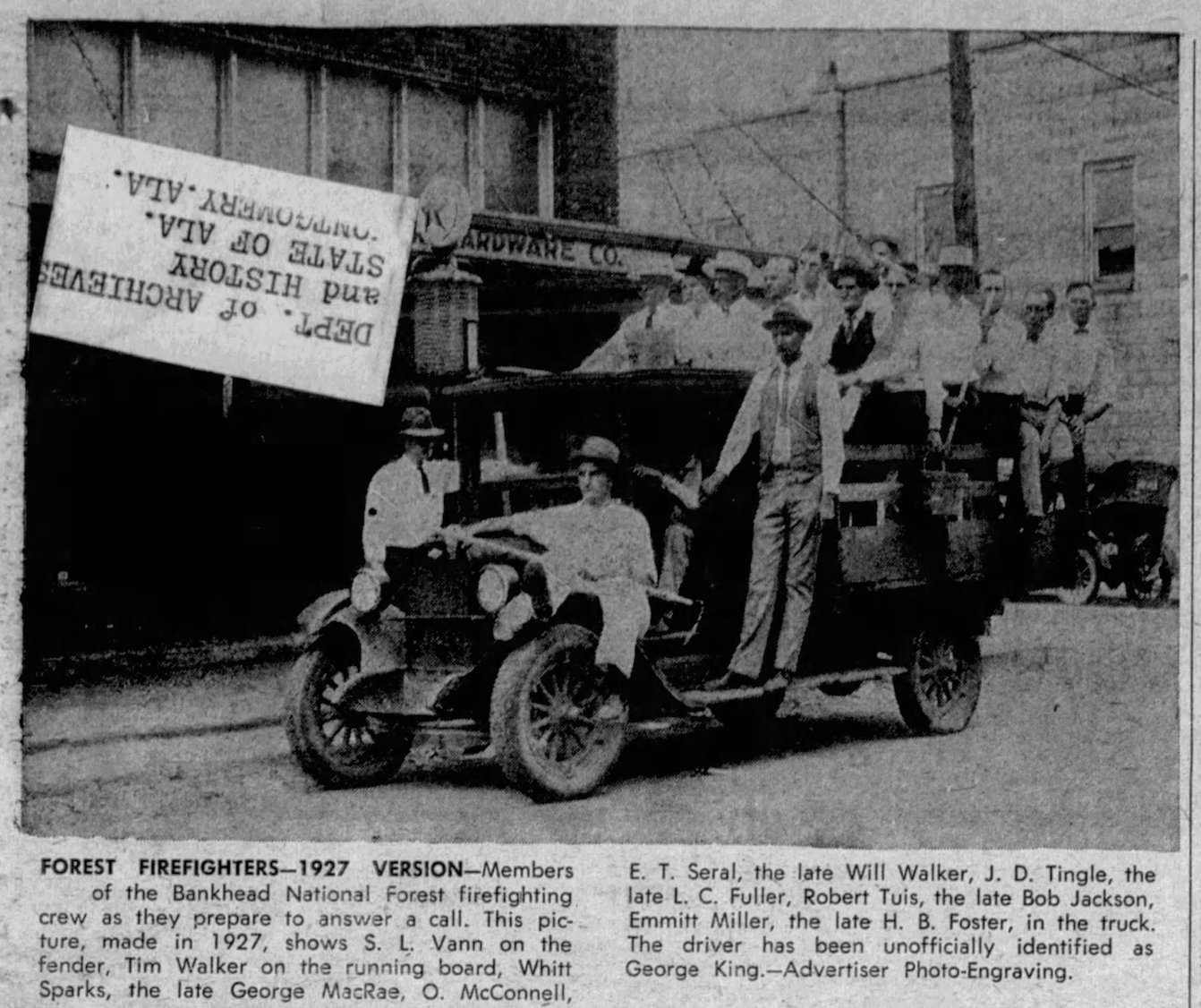 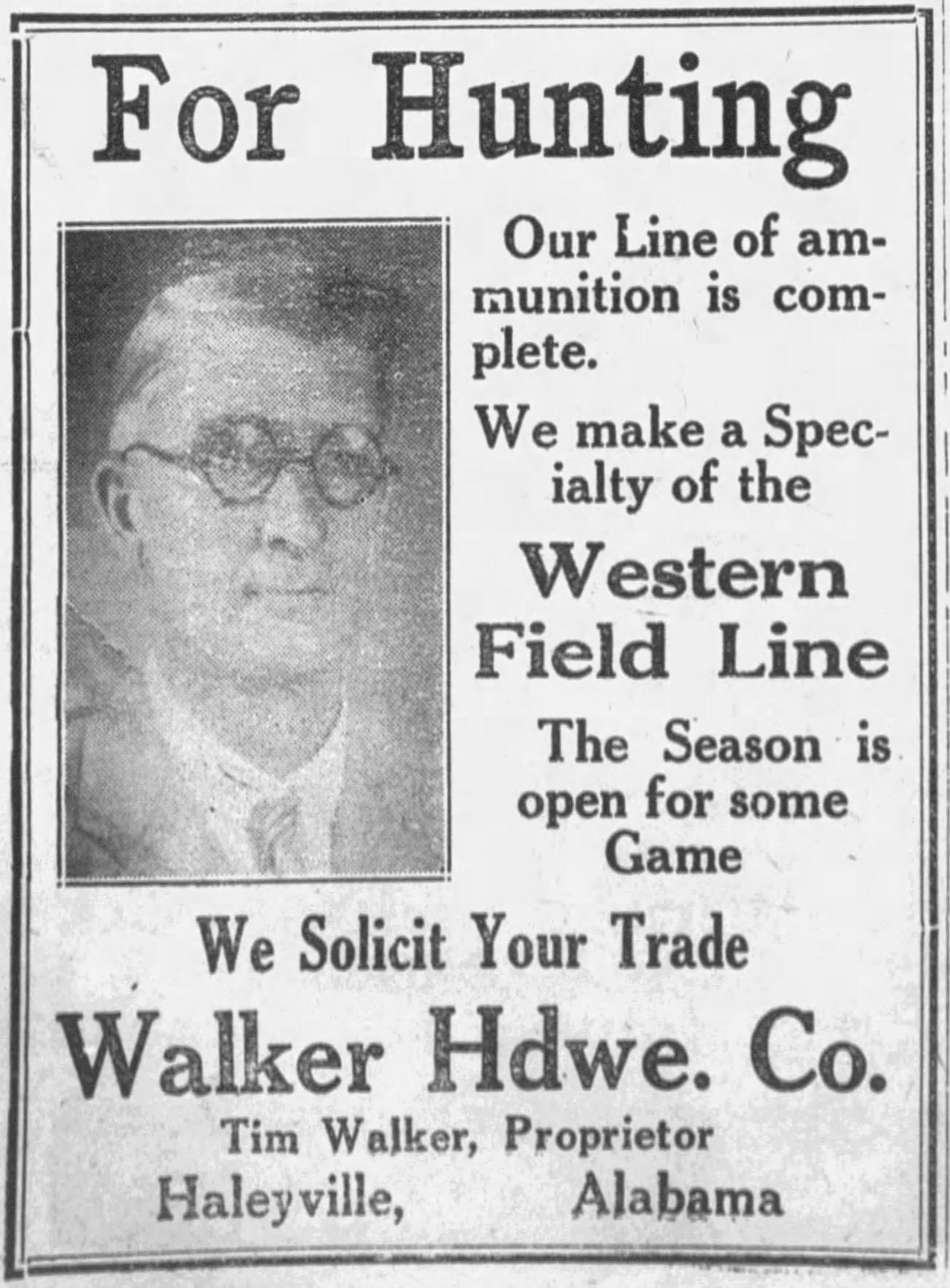 The Laurel Land Cemetery is locate in south Dallas, Texas. Take I-35E south of the city to the Laureland exit and head east. The cemetery is practically on the exit. It is a huge grave location. It may be best to stop in the office for a map. Locate Section 24 and head there. Find the Section 24 sign and park. Head straight in from the sign, around 15 markers and the Walker plot will be in the next row to the right. The GPS location below should be exact. I have a cemetery map here. 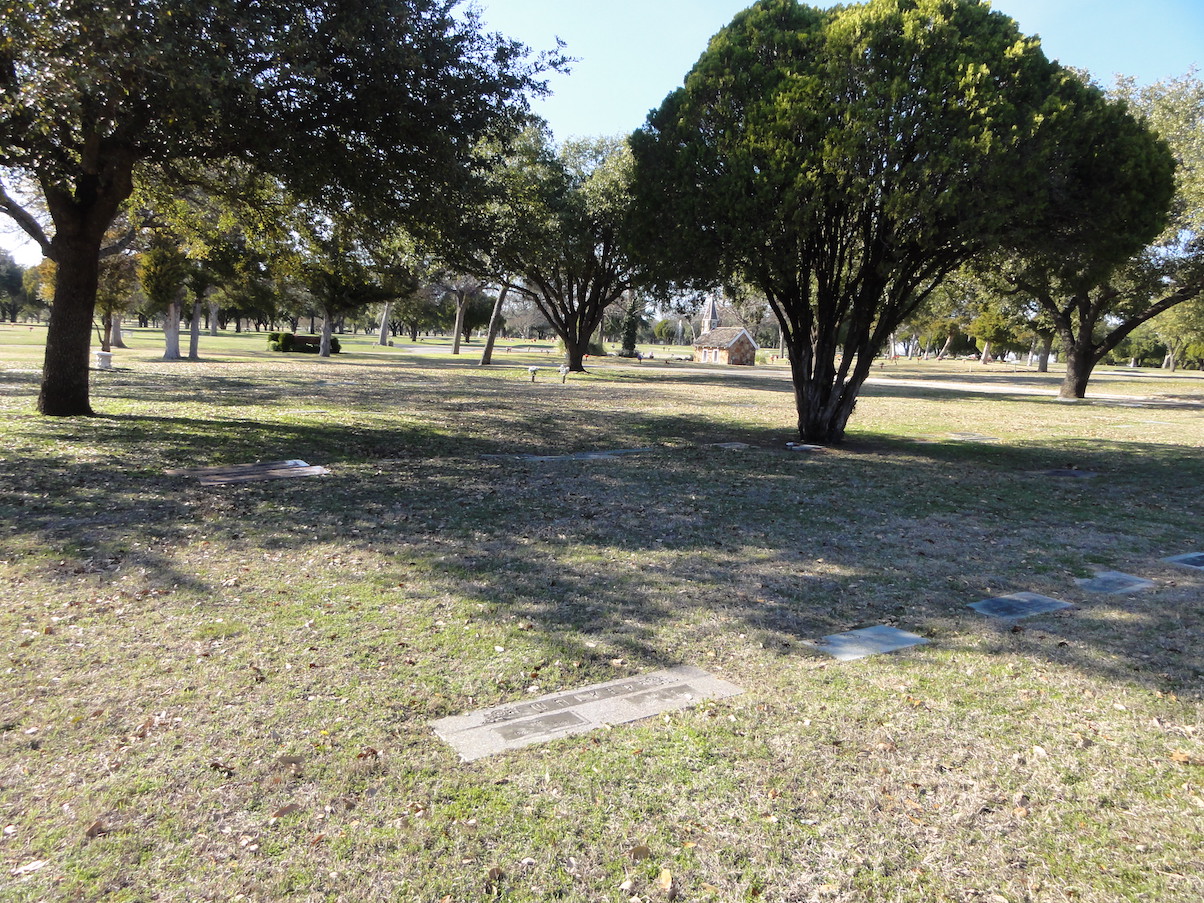 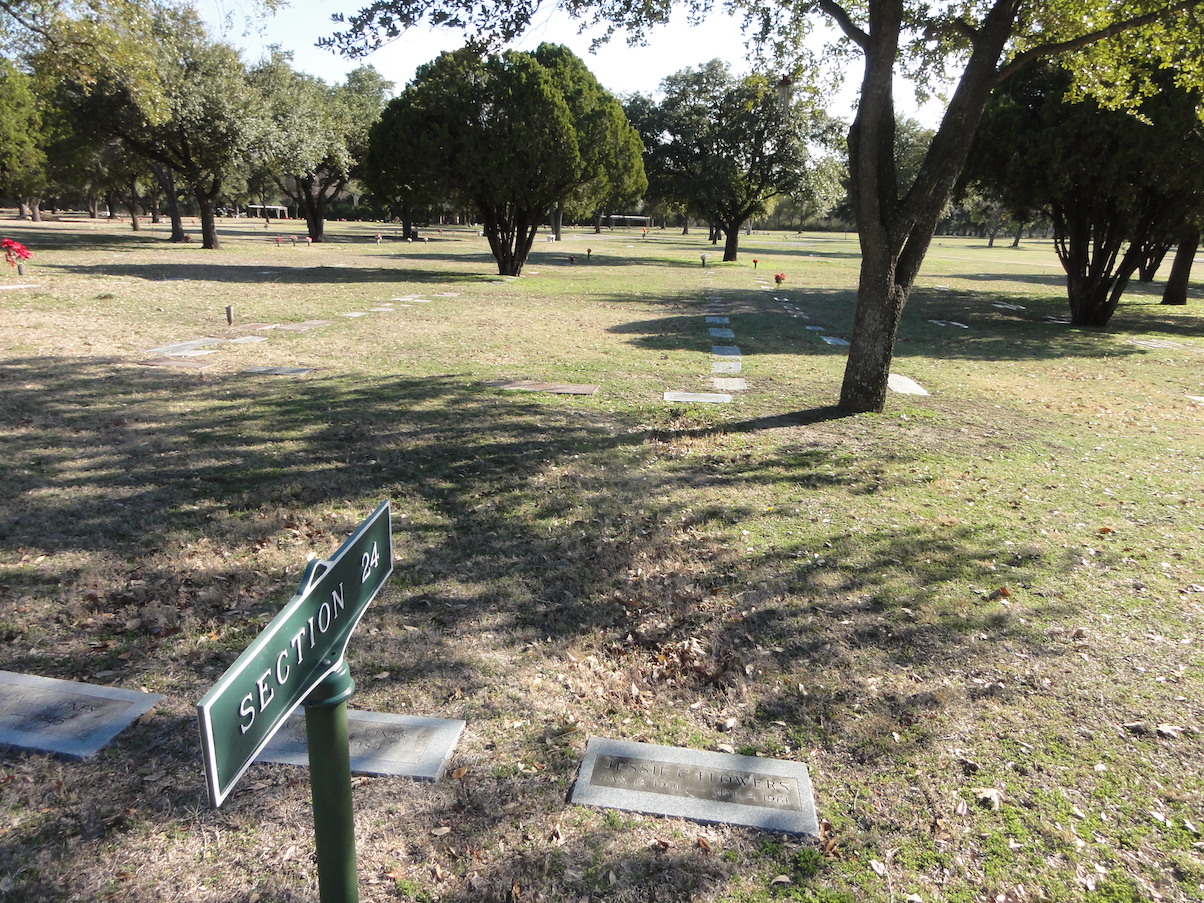 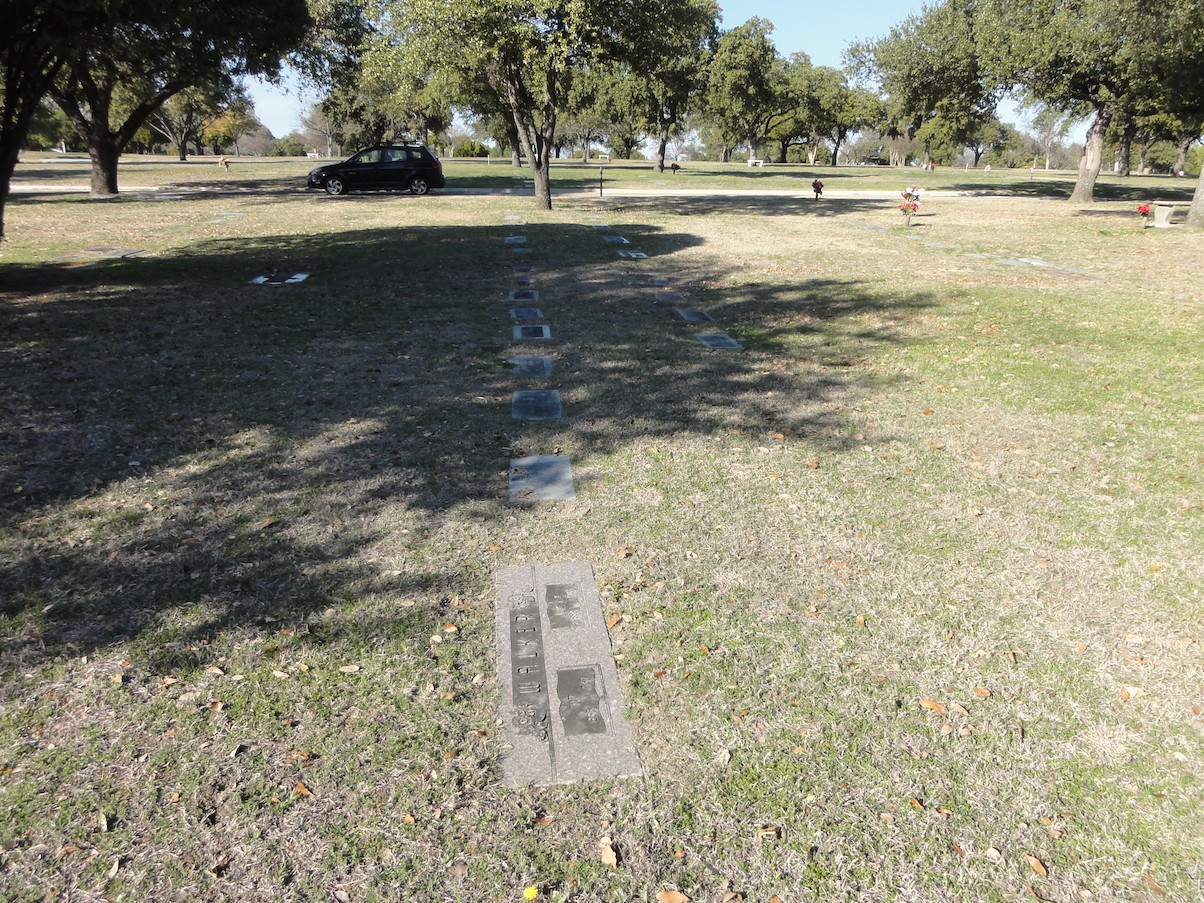 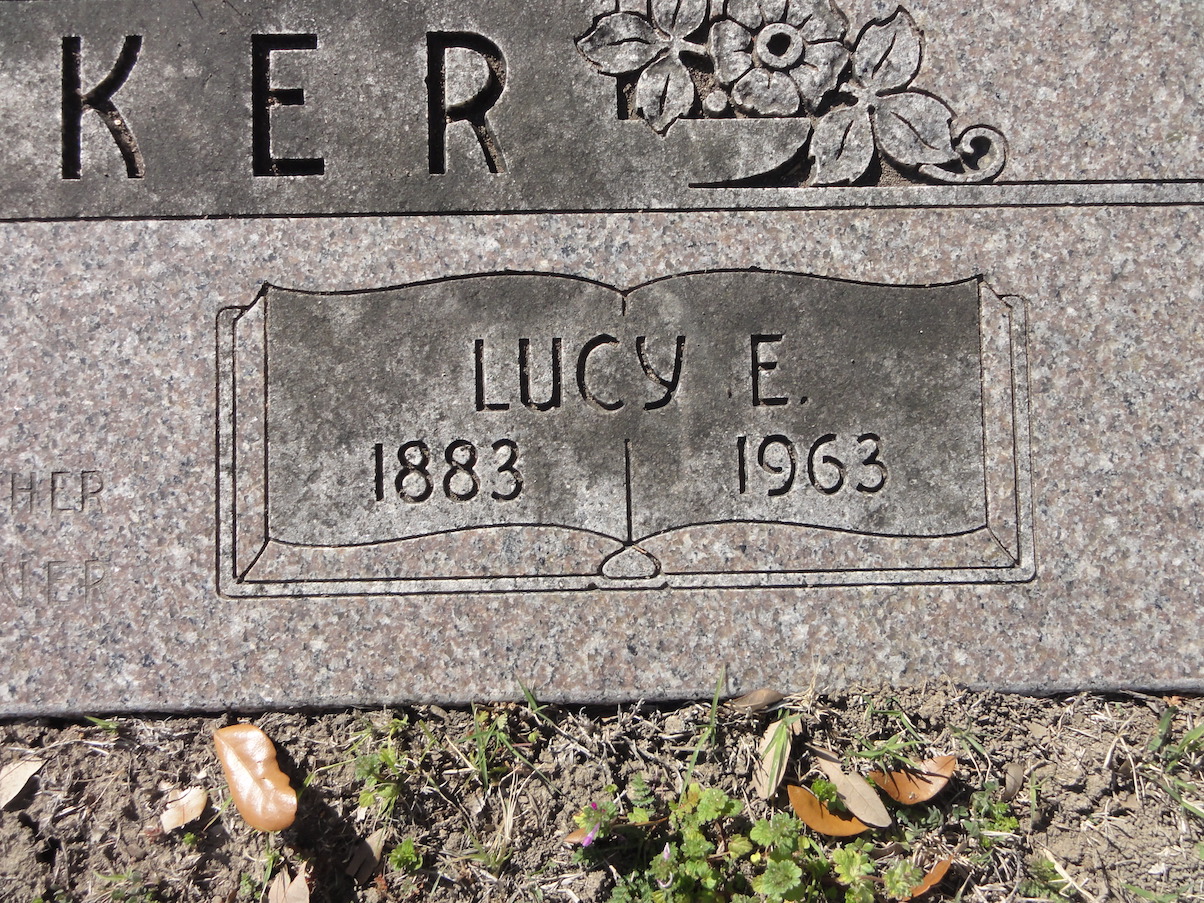 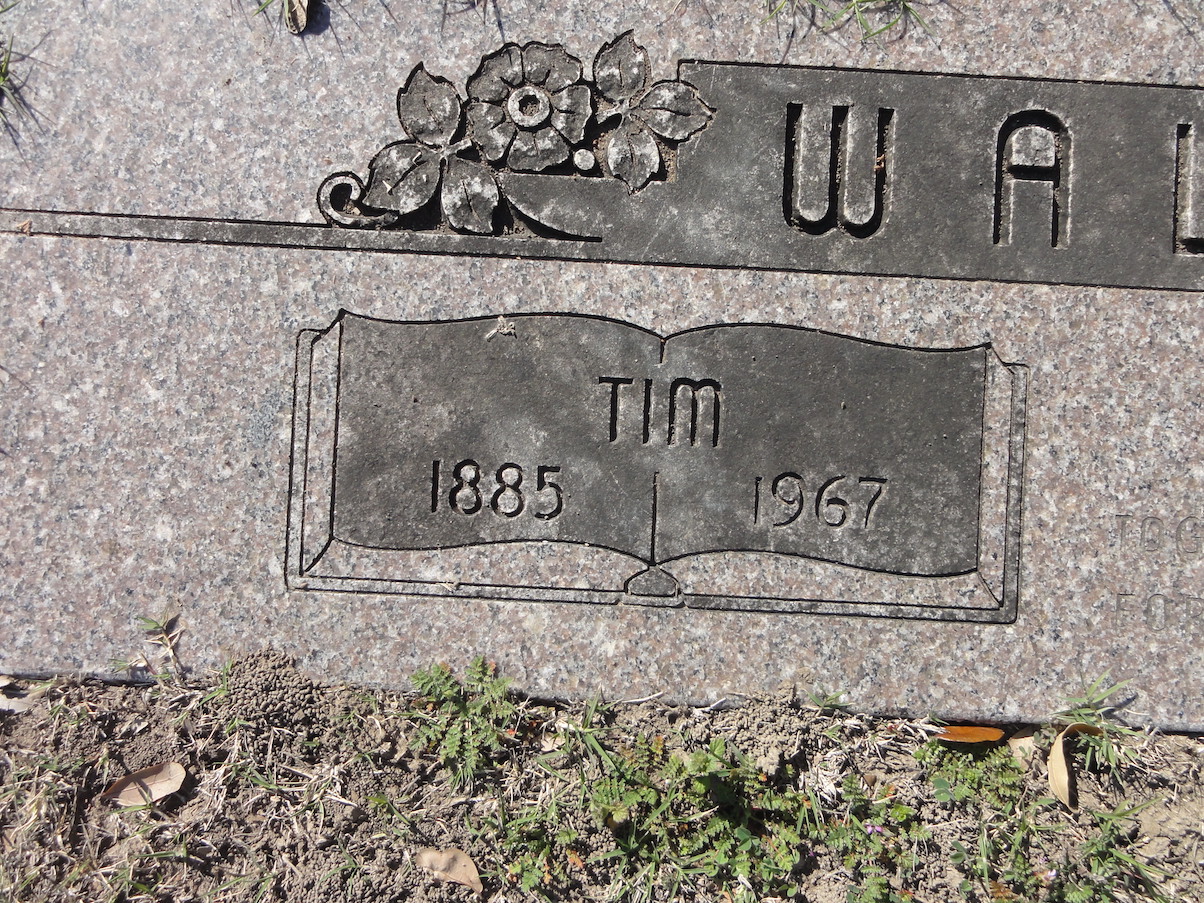 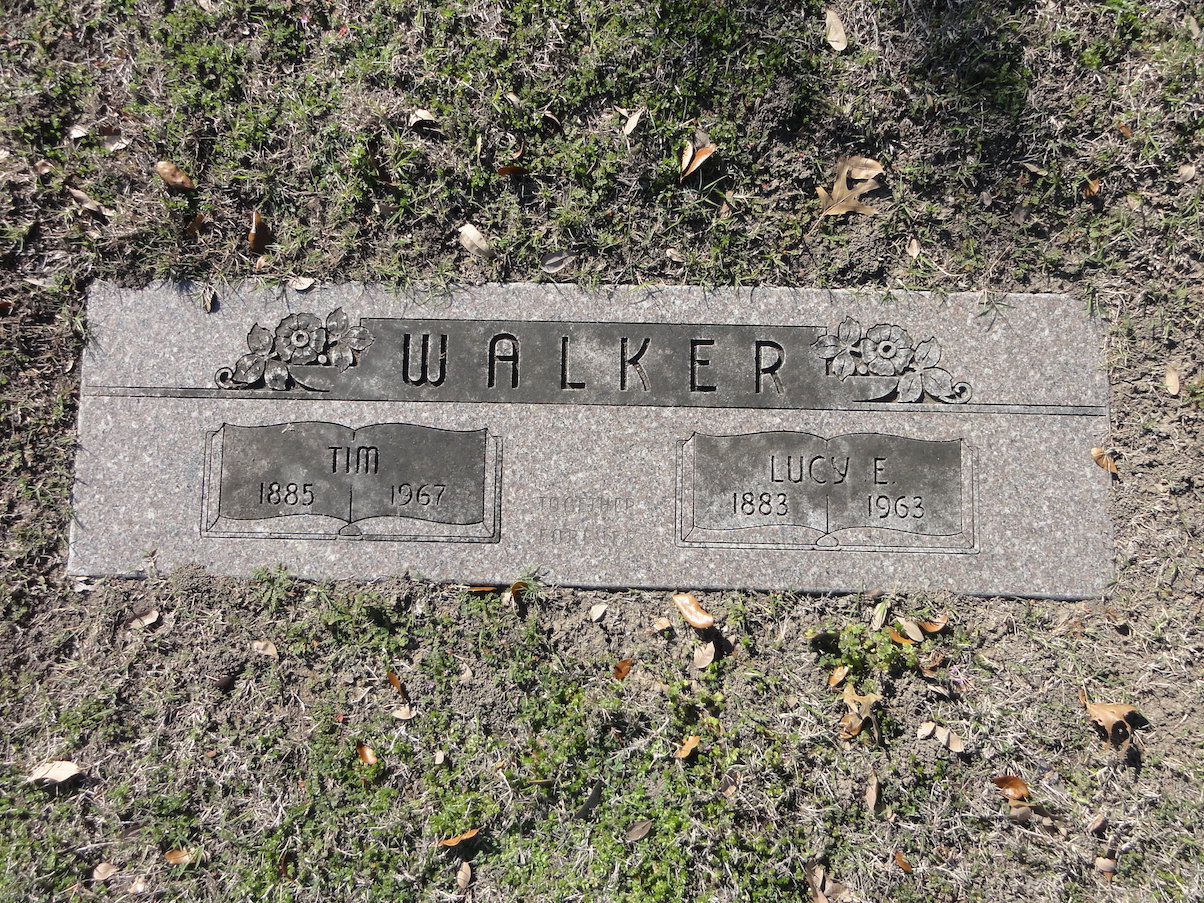 Special Recognition: In 2015 my daughter and her family were in Fort Worth visiting her in-laws, Mark and Debbie Hooper. Jenny and I flew in to visit. While there they loaned me their car to do some research. On this trip, I found the graves of a good number of gospel preachers of yesteryear including that of Tim and Lucy Walker.