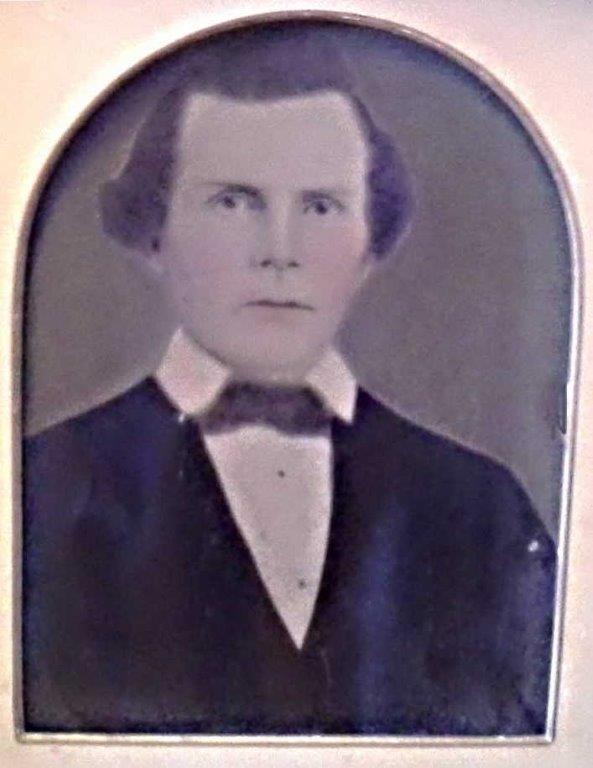 Died, on the 10th inst., at his residence near Mongle's Springs, Washington County, Virginia, after an illness of four weeks, Rev. David M. Buck.

The disease which resulted in his death was Typhoid fever. Notwithstanding the most assiduous and soothing ministration of his affectionate family, and the most skillful medical attention, yet the disease could not be stayed. Death claimed him for his own, and tore him way from the bleeding bosoms of his family and friends - striking down in their midst, their beloved Pastor who had labored long and faithfully among them. The Church of Christ has sustained a great loss in the departure of our beloved brother Buck, from the labors of earth to the joys of heaven. He was an affectionate husband, indulgent father, kind master, beloved neighbor, and a bright and shining light to the Church. He was gifted by nature with a clear and vigorous mind, and devoting himself assiduously to his studies, he not only made large attainments in knowledge, but received such mental culture as fitted him in an eminent degree to discharge with success the duties of his profession. Brother Buck was a native of Carter County, Tennessee was early called to the fold of Christ, and set apart for the work of the ministry. The evidence of his change of heart was not only clear to his own mind, but satisfactory to all who had intercourse with him. Everywhere he preached, he left marks of his laborious industry in the improvement of those who were committed to his charge.

He married in the summer of 1847, and left behind a loving wife to treasure in her heart the memories of his virtues and excellencies as the dearest legacy of the departed, and five interesting children, whose youth and helplessness, reminds the stricken wife that a mother's duties are yet to be performed. When teaching those dear ones, the lessons of wisdom and purity, the remembrance will come as a balm to heal the wounded heart.

His domestic life exhibited the most engaging picture of war and self- sacrificing devotion.

May God be a husband too the widow, and a father to the fatherless, and may they all so live, that finally they may meet in that sun bright clime around the throne of God. 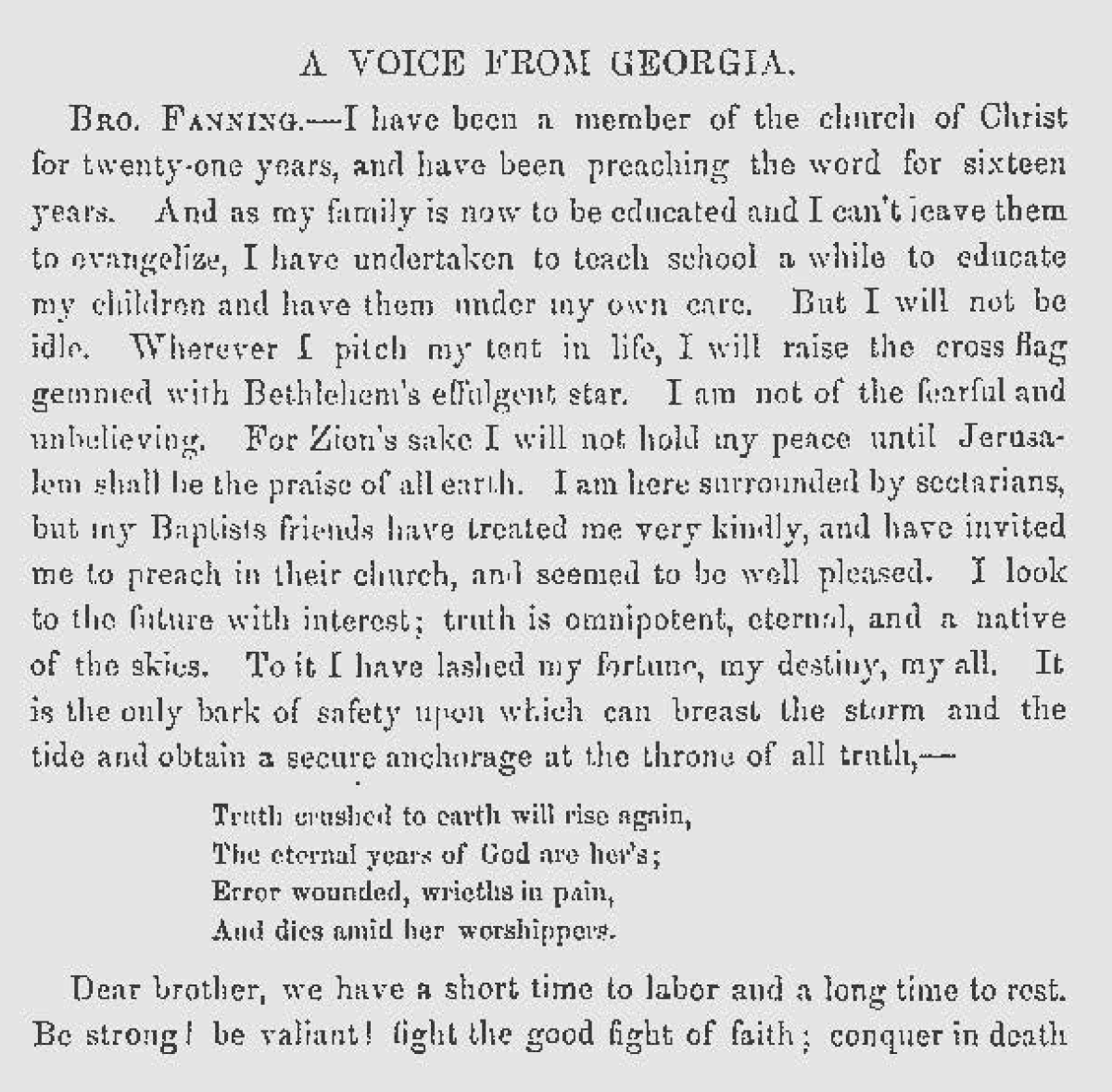 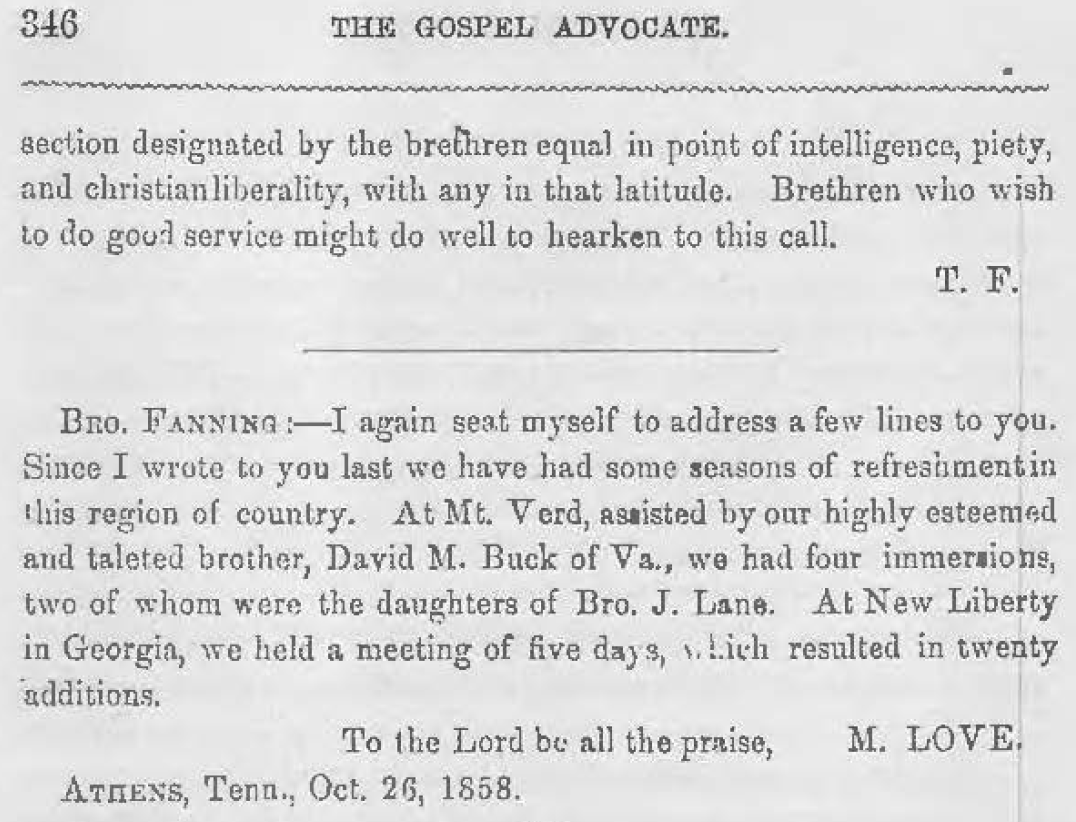 Gospel Advocate, 11.11.1858, p.346
Note: This message was sent in to the Gospel Advocate by Madion Love, a gospel preacher that traveled all over Tennessee to preach. He speaks of David M. Buck of Va. preaching in Athens, Tennessee 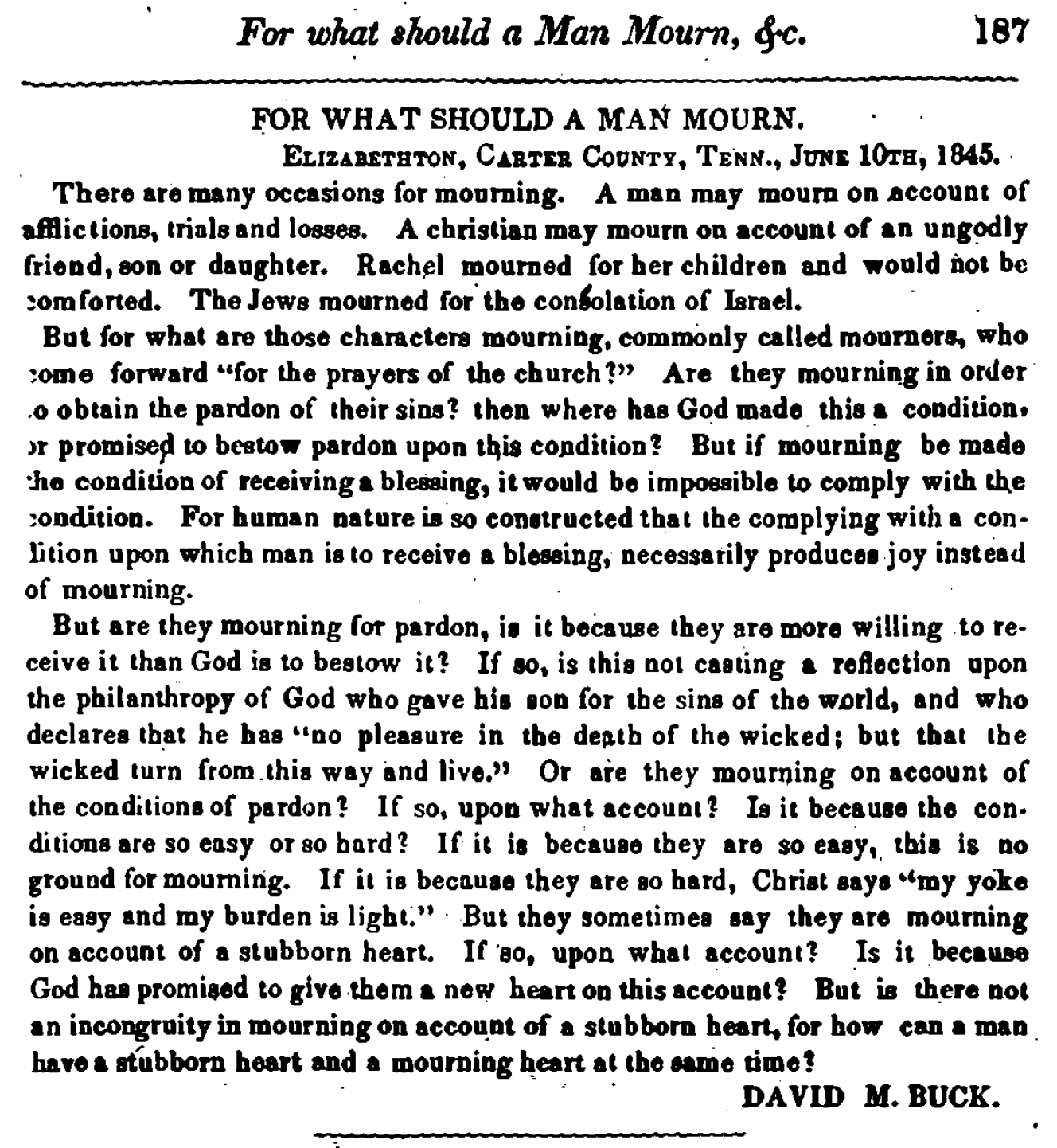 About six miles NW of Abingdon, Virginia, northwest on US-19 N/US-58 ALT W for about 6.4 miles and turn right on Brumley Gap Rd. As soon as you cross the North Fork Holston River turn right on N. Fork River Road. Go 1.3 miles and on the left is the Mongle Family Cemetery. Also called the Davis Cemetery where David M. and Mary E. Buck are buried. The cemetery is not visible from the road. The easiest access is up a private driveway. If accessing the cemetery from the driveway, it is prudent to get permission. To the right of the driveway you will see a wooden fence heading up the hill. The small cemetery is just the other side of the fence on the little hill/knoll. 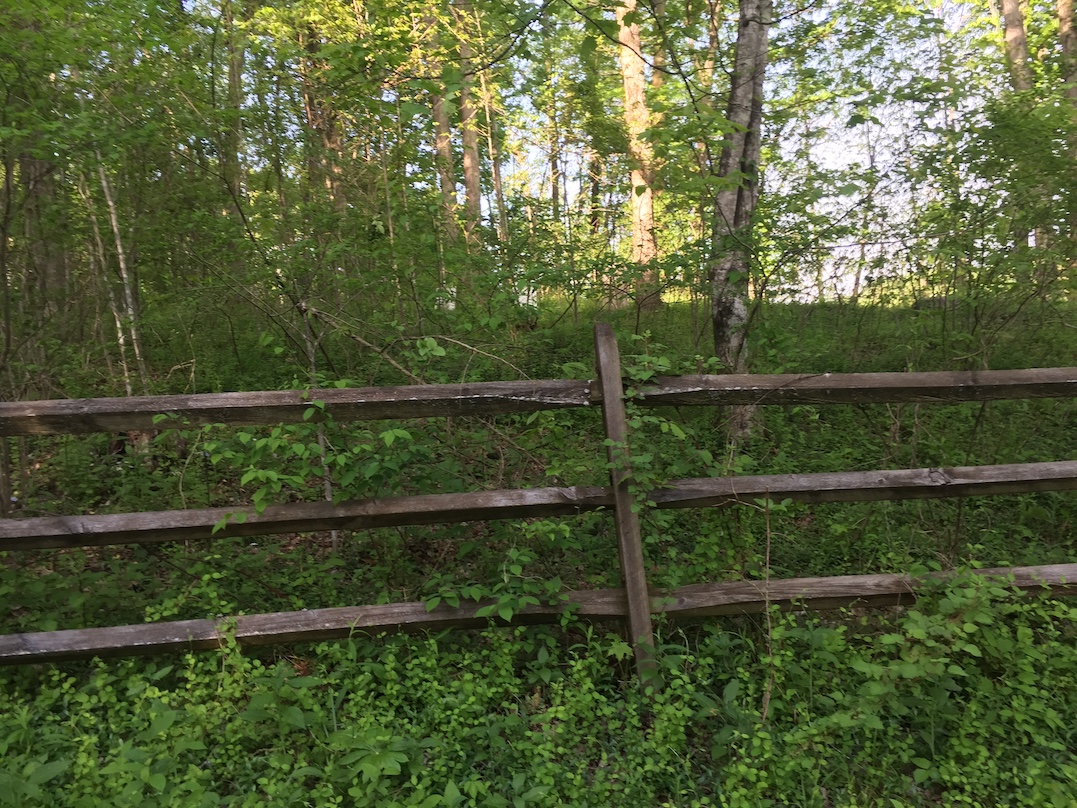 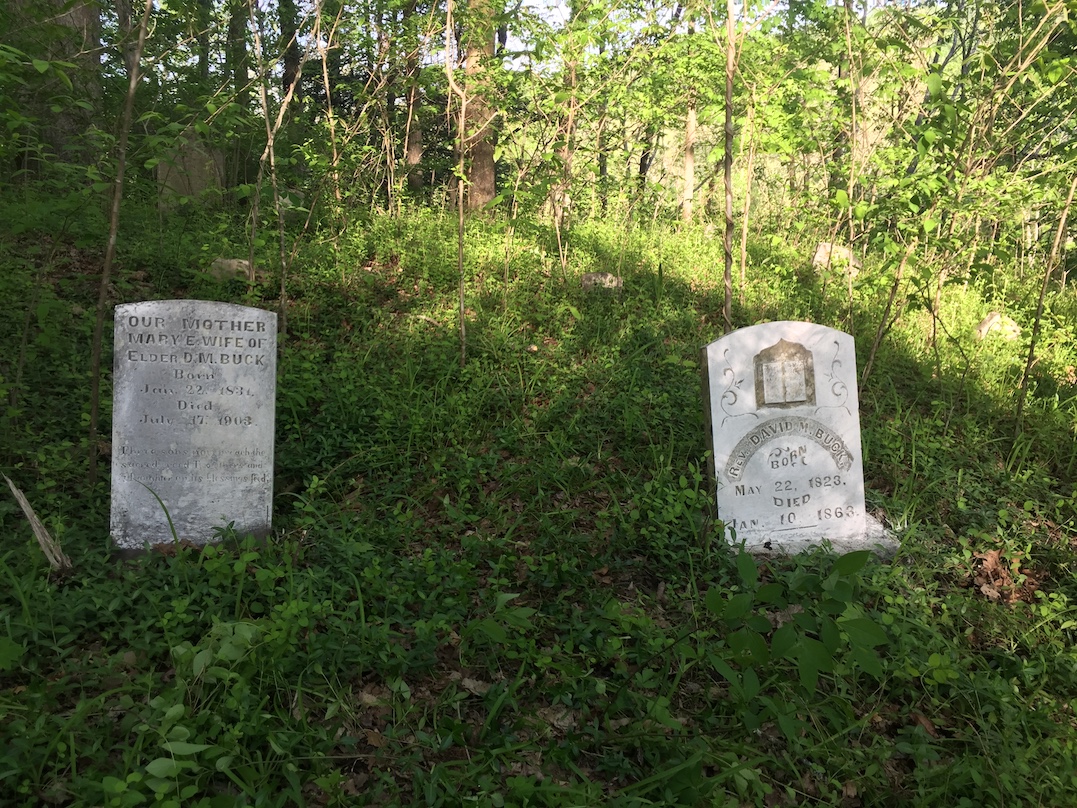 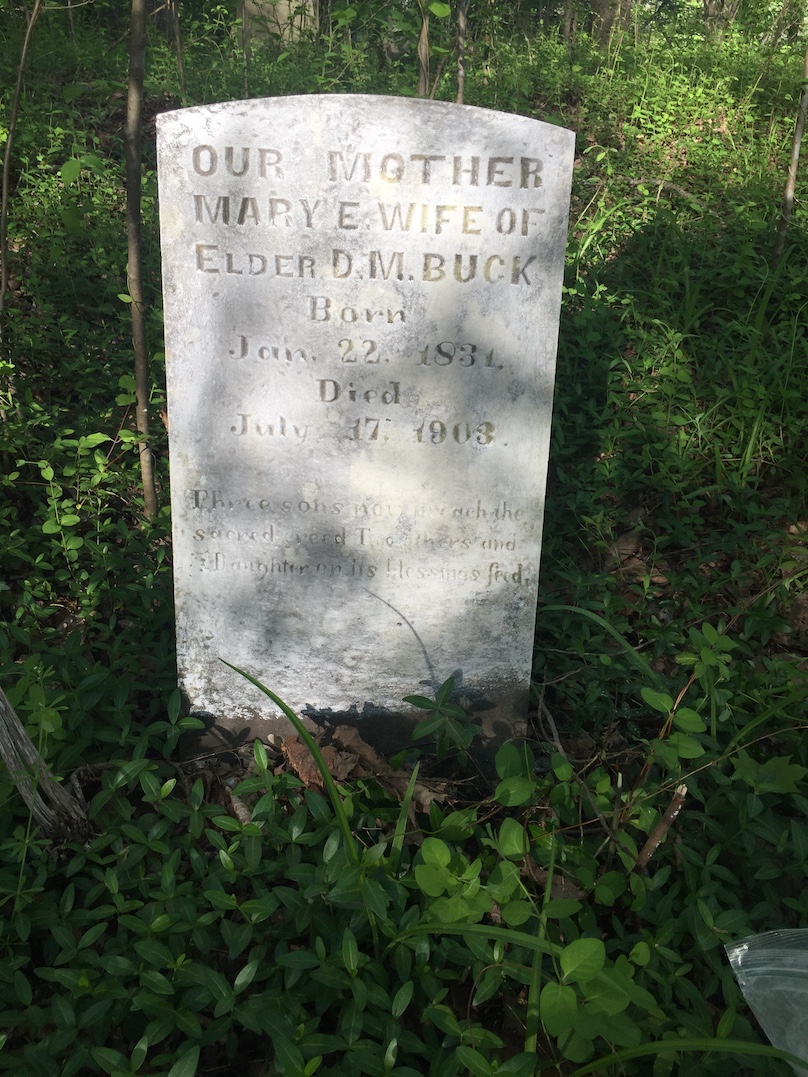 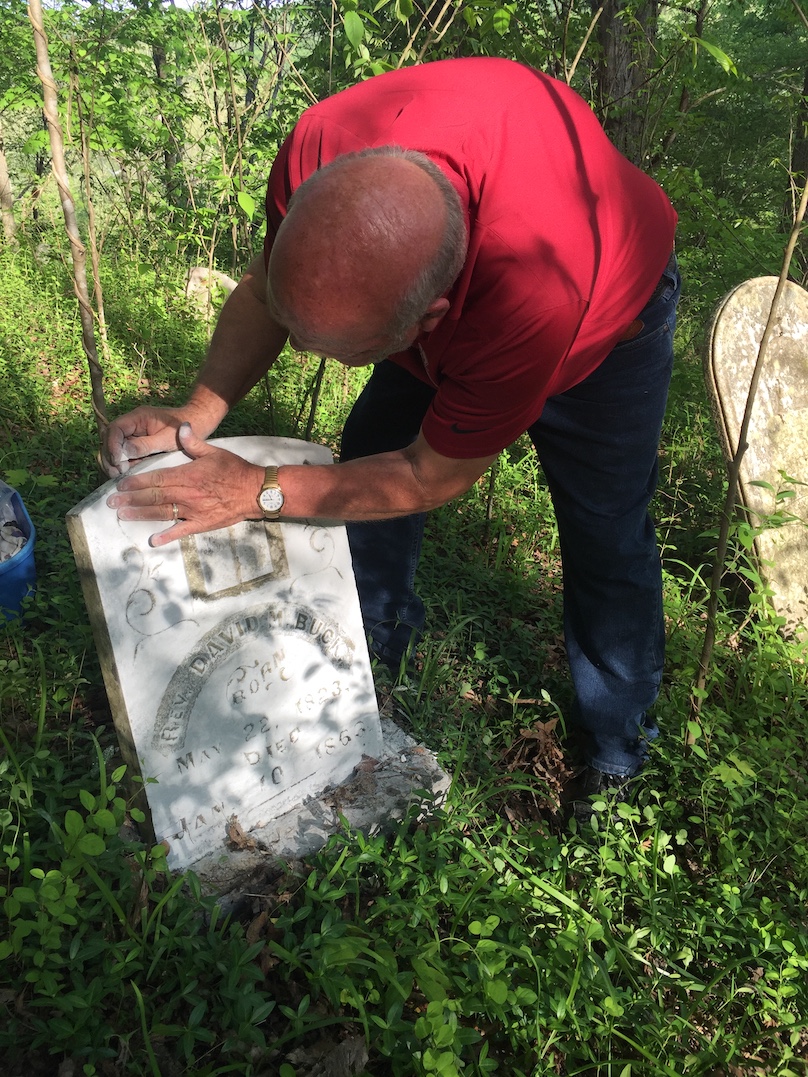 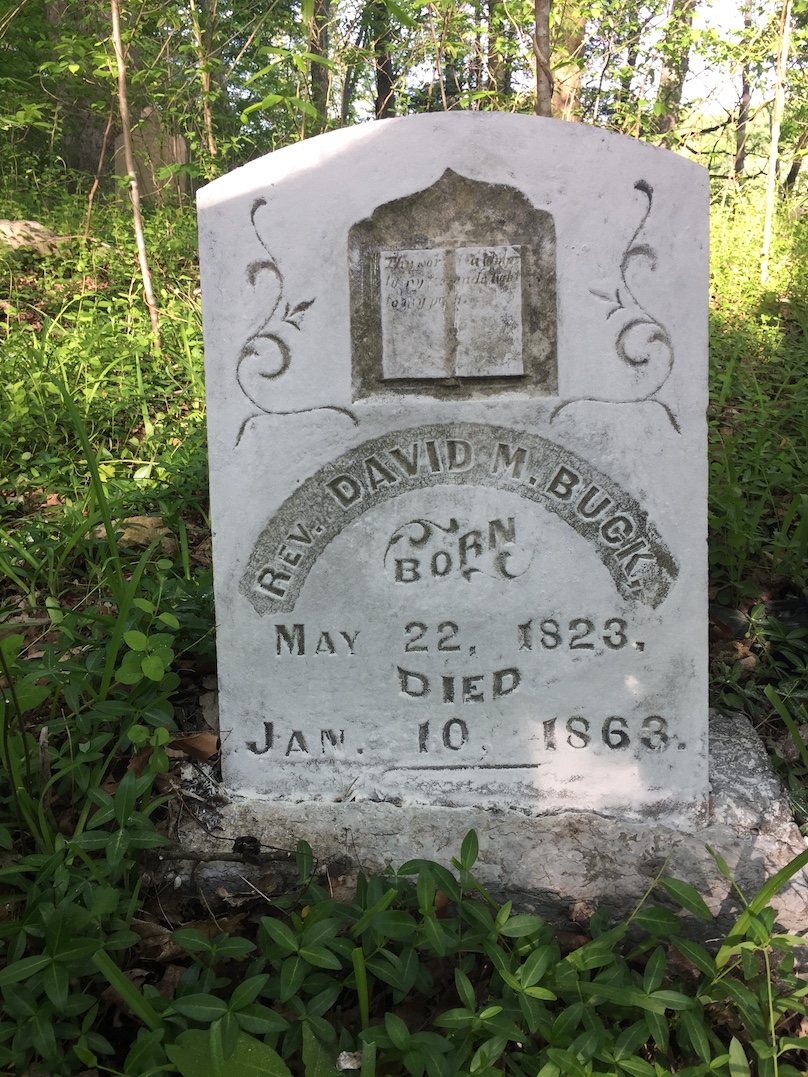 Special Recognition: In June of 2018 Wayne Kilpatrick found the grave of David M. Buck. In April of 2019 he and your webeditor made a trip into southern Virginia to once again see the marker of this great old soldier of the cross. The photos were taken on this page were taken on this trip.