The Church Of Christ At Brush Run* 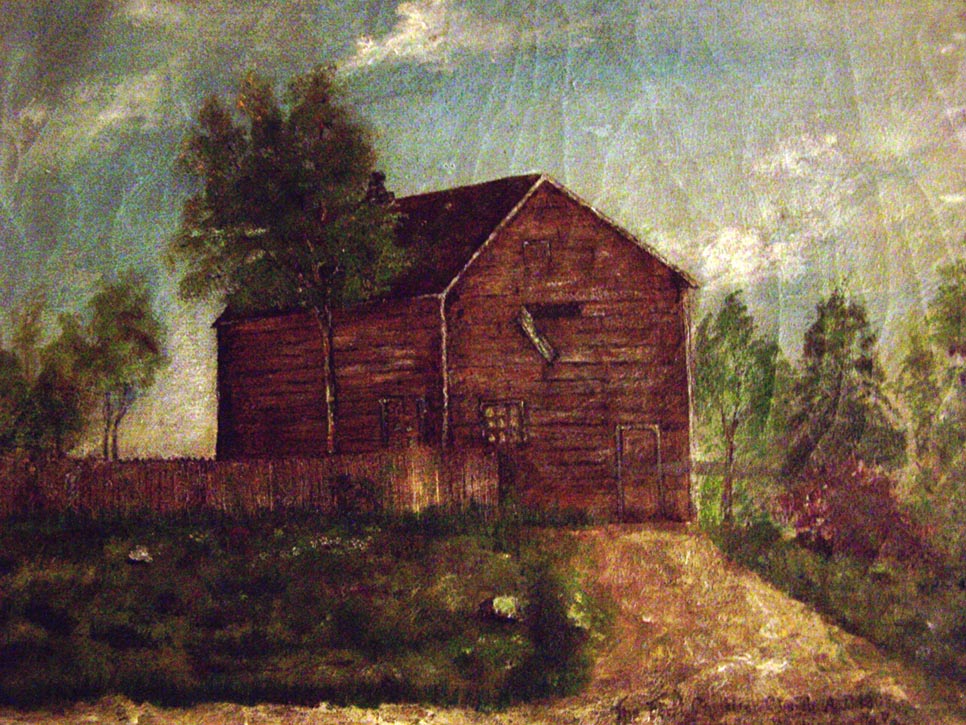 The Brush Run Church In Brief

The church of Christ at Brush Run has held a sense of interest and intrigue on the part of those who have long been interested in the American Restoration Movement. When Thomas Campbell arrived in America in 1807, he was a Presbyterian through and through. Yet, disappointment in the unwillingness of his church to conform to the Scriptures led to his departure in 1809.

Upon his departure from the Seceder Presbyterian Church, Thomas Campbell continued to preach among his friends and followers near Washington, Pennsylvania. Early in the summer of 1809, he held meetings at the home of Abraham Alters who lived on the road between Mt. Pleasant and Washington. It was during one of these early meetings that Campbell preached a sermon on biblical authority where he affirmed the rules of biblical interpretation that would prevail among those he worked. Robert Richardson recorded it this way, “That rule, my highly respected hearers,” said he in conclusion, “is this, that WHERE THE SCRIPTURES SPEAK, WE SPEAK, AND WHERE THE SCRIPTURES ARE SILENT, WE ARE SILENT.” (Memoirs of Alexander Campbell, 1,236) The result of this commitment led some to wonder how he would apply this new interpretation to things like infant baptism, and other things that most of his Presbyterian friends had been doing in their former church.

As the summer progressed, people came to the meetings at Alters' home where Campbell would preach and admonish. As a group was clearly developing, it was finally determined that an association of believers should be formed. In a meeting at the headwaters of Buffalo Creek, “The Christian Association of Washington,” was formed, August 17, 1809. They appointed twenty-one people to determine how the process was to be carried out in a practical and Scriptural manner.

In a short time, they found it inconvenient to meet in people’s homes, thus they determined to “erect a log building on the Sinclair farm, about three miles from Mount Pleasant, upon the road leading from Washington to that place, at the point where it was crossed by the road from Middleton to Canonsburg.” (Memoirs, 1,241) The building was designed to accommodate a school, and Thomas Campbell continued to meet and preach with the group throughout the summer.

It was about this time that Thomas Campbell visited in the home of Mr. Welch, a member of the association. He would often go home with him after his meetings. Around the end of August, he spent a week in the home of Mr. Welch, where, “a little chamber up stairs was assigned to him as an apartment.” This is where he spent most of the week studying and writing what is now recognized as one of the cornerstone documents of the Restoration Movement, the Declaration And Address. Upon its completion, it was read at the next gathering of the Association and submitted to be printed, September 7, 1809.

Thomas Campbell’s wife Jane, and his children arrived in New York harbor from Scotland on September 29, 1809. It would not be before the middle of October before they met on the road between Philadelphia and Washington. It was about this time that Alexander had the opportunity to read the Declaration & Address. Committing himself to it and the work of his father, they set out to work together among the people of the Association.

In the spring of 1811, a marriage took place between Alexander Campbell and Margaret Brown of Bethany, Virginia. Within weeks, talk among the people of the association led to the thought that another worship location closer to the families west of the Crossroad meetinghouse would be necessary. Notice the following from the Memoirs of Alexander Campbell,

“As many members of the Christian Association lived near Buffalo Creek, it was, about this time, resolved to erect a house of worship there. They accordingly selected a piece of ground on the farm of William Gilchrist, in the valley of Brush Run, about two miles above its junction with Buffalo Creek, as an eligible site for the building which was to be framed. On the farm immediately adjoining there was a saw-mill, and the sons of the proprietor, David Bryant, one of whom, Joseph, was a zealous member of the Association, at once engaged in sawing out the necessary lumber.”
(Memoirs, 1,321,322) 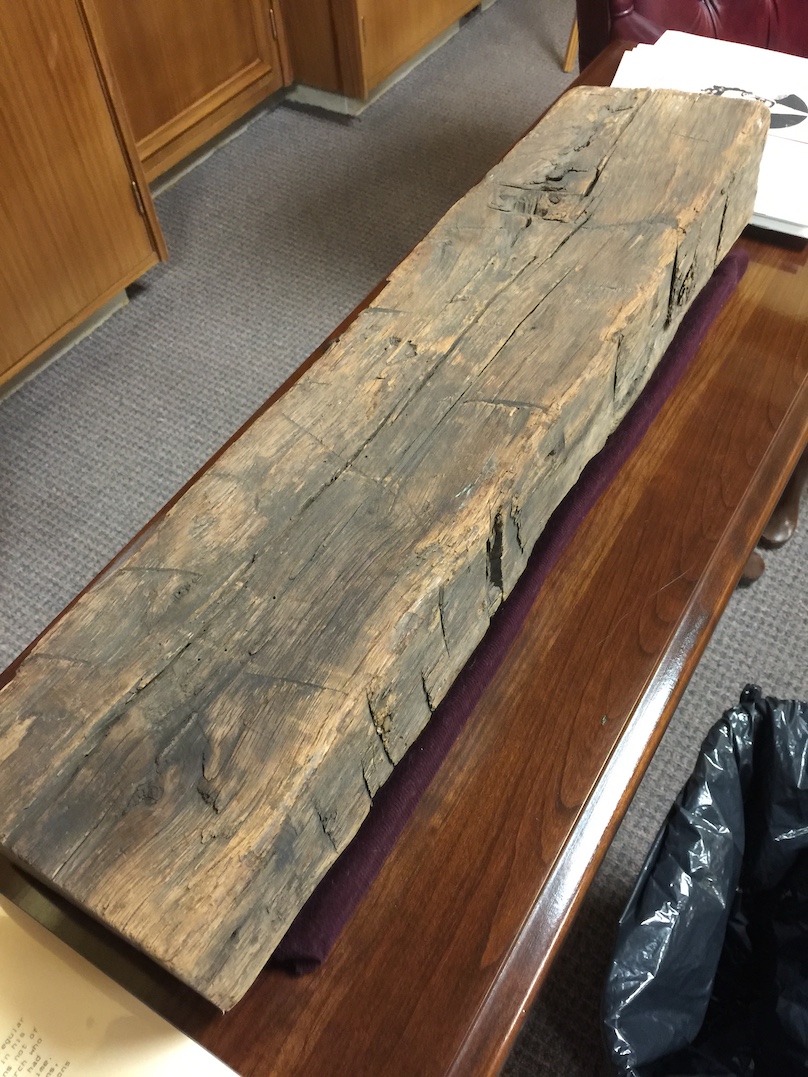 Originally owned by Rev. Wilfred P. Harmon
first curator of the restoration project of the Campbell Estate
This photo was taken May 14, 2015 on a Southeast Institute Of Biblical Studies Tour
Now on display at Bethany College Library—Special Collections

Thus, on May 4, 1811 twenty-nine people came together to plant what was officially called, “First Church of the Christian Association of Washington County, Pennsylvania.” Unofficially, they became the “Church of Christ at Brush Run,” but regularly referred to it simply as “Brush Run.” (Christian Baptist, 1,281). The membership included: Thomas and Jane Campbell, and their daughter Dorothea; Alexander and Margaret Campbell; James Foster and his wife; John Dawson and his wife; Thomas Hodgens, Sen., his wife and son James Hodgens; James Hanen and his wife; William Gilcrist and his daughter, with his wife and her mother; George Sharp, Sen. and his wife and son John; Thomas Sharp and a Mrs. Sharp, the wife of George Sharp, Jr.; George Archer and wife; Abraham Altars, Margaret Fullerton, Joseph Bryant and John Donaldson. (Memoirs, 372) The following day, the church met for worship and communion for the first time as a congregation. Alexander Campbell preached the first lesson from John 6:48. Deacons were chosen, George Sharp, William Gilcrist, James Foster, and John Dawson. On June 16th weekly communion at Brush Run was established.

A building was produced on the Gilcrist property that weekend, on a two-acre section he deeded to the church for $1.00. It was eighteen by thirty-six feet in size. On July 4, 1811 three members of the Brush Run requested immersion into Christ. Thomas Campbell assisted by baptizing them on the farm of David Bryant, in Buffalo Creek about two miles up stream from the mouth of Brush Run. These were Joseph Bryant (who later married Alexander’s sister, Dorothea), Abraham Alters and Margaret Fullerton. (Memoirs, 1,372). The record said that they found a deep spot where they waded out shoulder high into the water. Thomas did not get into the water, but eased himself out on a large tree root where he put their bodies completely under the water.

On January 1, 1812 Alexander Campbell was officially ordained for the ministry at Brush Run church. The following summer, seven were baptized in Buffalo creek very close to the spot where others were immersed the year before. These included, Thomas and Jane Campbell, Alexander and Margaret Campbell, Dorothea Campbell, and Mrs. & Mrs. James Hanen. Elder Matthias Luce of the Baptist church baptized them. The took place about noon on June 12th, 1812, at noon on Wednesday. All together, they were at the creek for seven hours. Both Thomas and Alexander Campbell preached. In addition comments were made by Elder Luce and Elder Henry Spears from the Baptists. Thirteen were immersed the following Sunday by Thomas Campbell.

A decision was made by the Brush Run church on June 8, 1814 to move to Zanesville, Ohio to begin a work there. When Alexander shared this news with his father-in-law, John Brown, he offered the young preacher and his wife the Brown family farm if he would stay. Thus, the church cancelled the plans to move the congregation.

According to the minutes of the Redstone Baptist Association for 1815, held at Big Redstone, Fayette County, Pennsylvania, the Brush Run church was added to the association on Saturday, September 2. The relationship that developed over the years strained often. At the annual meeting for at Crosscreek Baptist north of Wellsburg, Alexander Campbell presented his great Sermon on the Law, on August 30, 1816. This sermon began a constant agitation within the Association concerning the Campbells and the church at Brush Run.

By August, 1823, Alexander Campbell was making plans to debate Presbyterian William L. McCalla in Washington, Kentucky the following October. His fear of trouble in the Redstone Baptist Associate, along with encouragement from Ohio preacher Adamson Bentley to join the Mahoning Baptist Association, Campbell revealed a scheme to the Brush Run church of a request for an honorable dismissal letter for he and about thirty others to go and start a new congregation in Wellsburg, Virginia, about five miles west of Bethany. The church was formed at Wellsburg on August 31st. This led to the departure of the Brush Run Church from the Redstone Baptist Association. Officially, the Redstone Association disassociated itself from Brush Run in the minutes of September 3, 1824. At this juncture, both Brush Run and Wellsburg were invited to join the Mahoning Baptist Association, most churches of which were located over the Ohio River in the Western Reserve of Ohio.

The church at Brush Run continued until June, 1826 when finally closing its doors. The old building stood on the property for many years not being used. Alexander Campbell died in March, 1866. The old building had been moved to Middletown where it had for years served as a barn and stable. It was not until June 1916, that the family decided to have the old Brush Run building disassembled and moved to the Campbell farm where it was reassembled between the mansion and Campbell’s “Light From Above” study. The old building continued to decay until it was disassembled in the fall of 1949. It marked the end of an era.

The Location of The Brush Run Church

The old location for Brush Run is on State Route 4061, Farrar School Rd. in far southwest Pennsylvania. From Washington, P.A. - Take Exit 17/Jefferson Avenue on I-70, and head north, (away from Washington) on Hwy. 18/844. When 18 and 844 split, be sure to go left on 844. Go a few miles and turn left on Hwy 331/Brush Run Road. (There has for years been a red barn at the corner, making for a good landmark to know where to turn off Hwy. 844. onto Hwy. 331/Brush Run Road. Take 331 to Farrar School Road, and turn right. Head up the hill until you see the little red schoolhouse on the right. Travel up the drive past the schoolhouse on up the hill. (Not the best to go when it is wet as the road is not paved, and has almost disappeared.) Head to the top of the hill, and you will see the monument on your left. Actual GPS location of the old church is: D.d. 40.21526833,-80.40880167

Likenesses Of Brush Run Over The Years 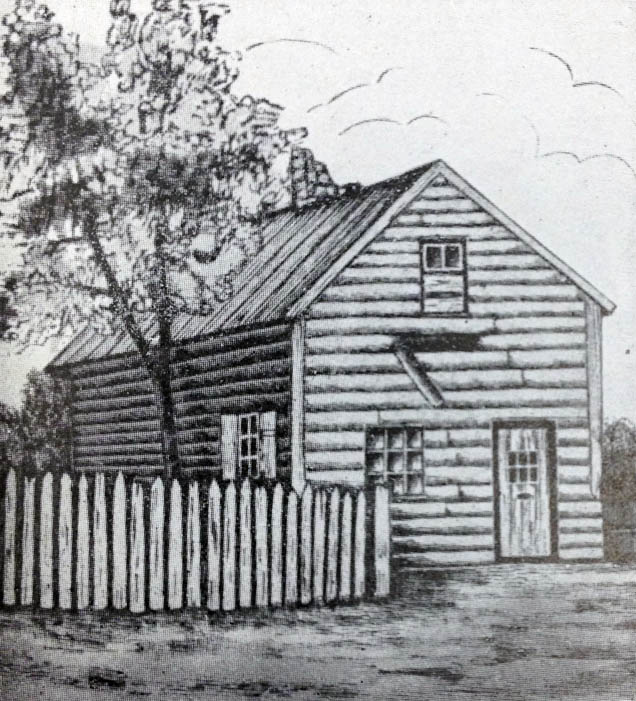 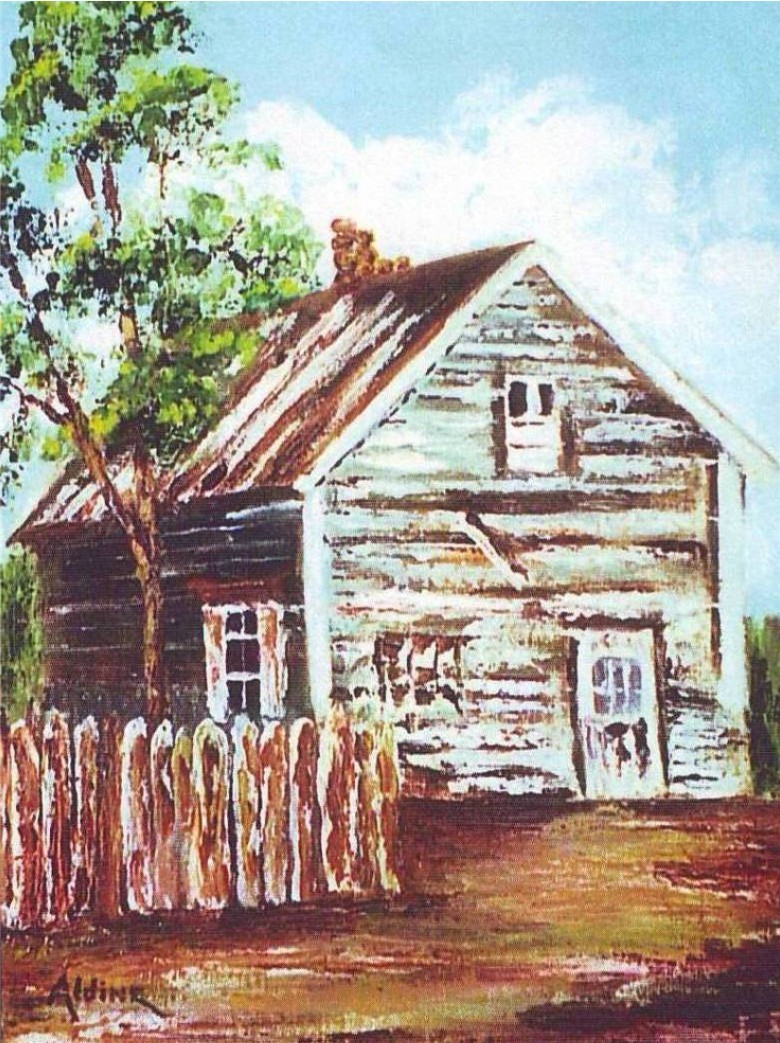 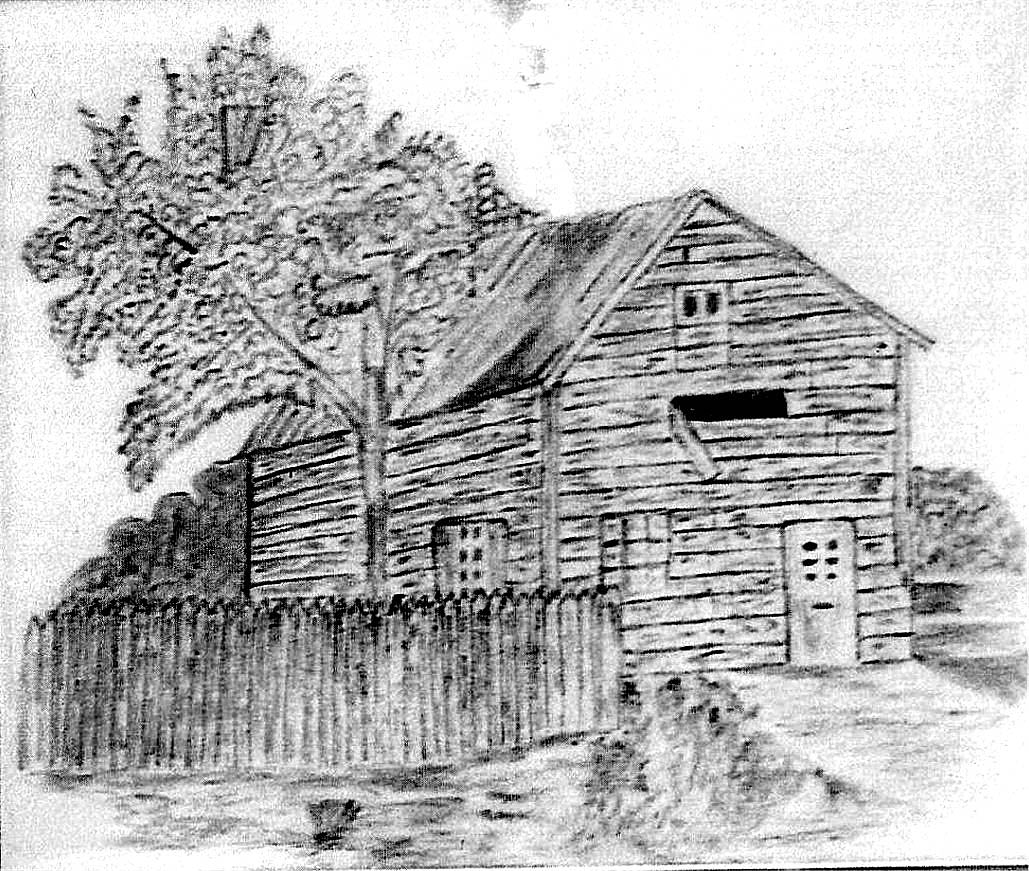 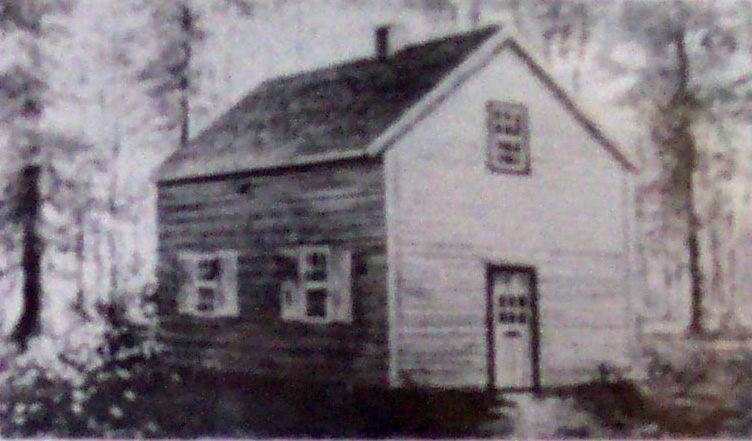 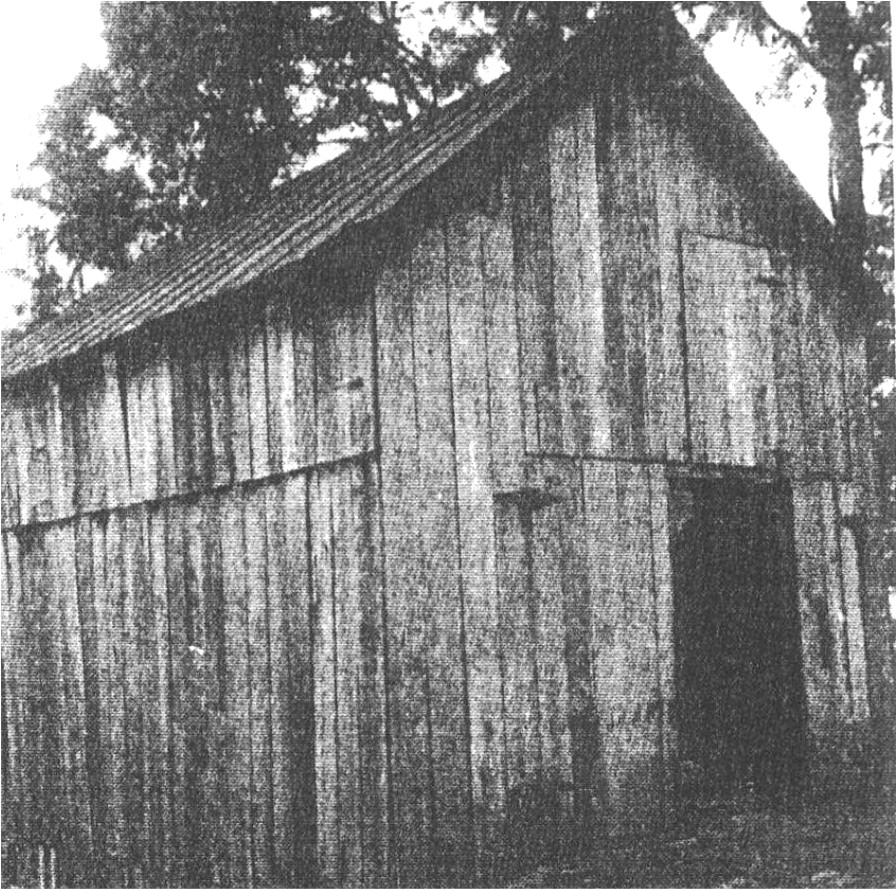 Brush Run Building As A Barn In Middletown 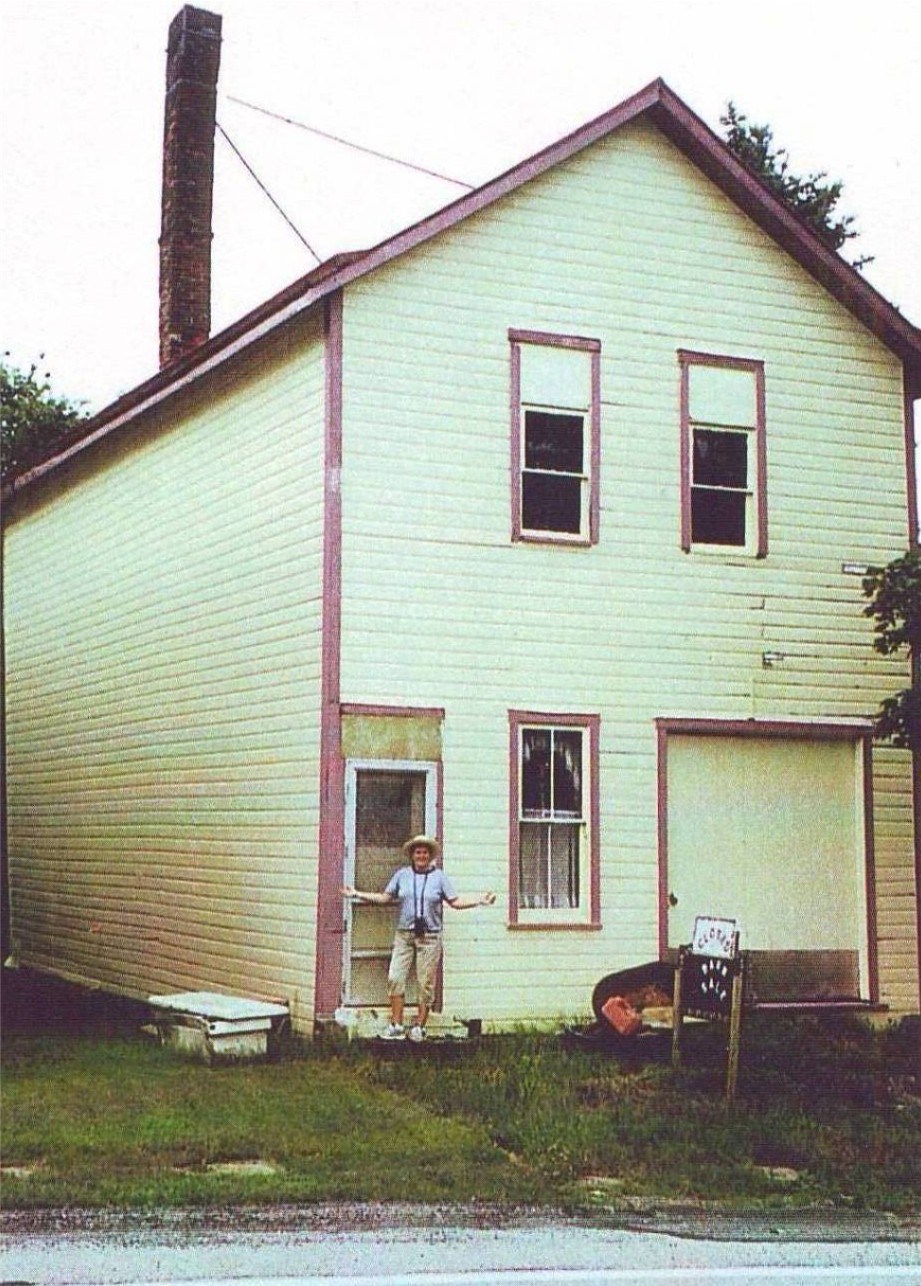 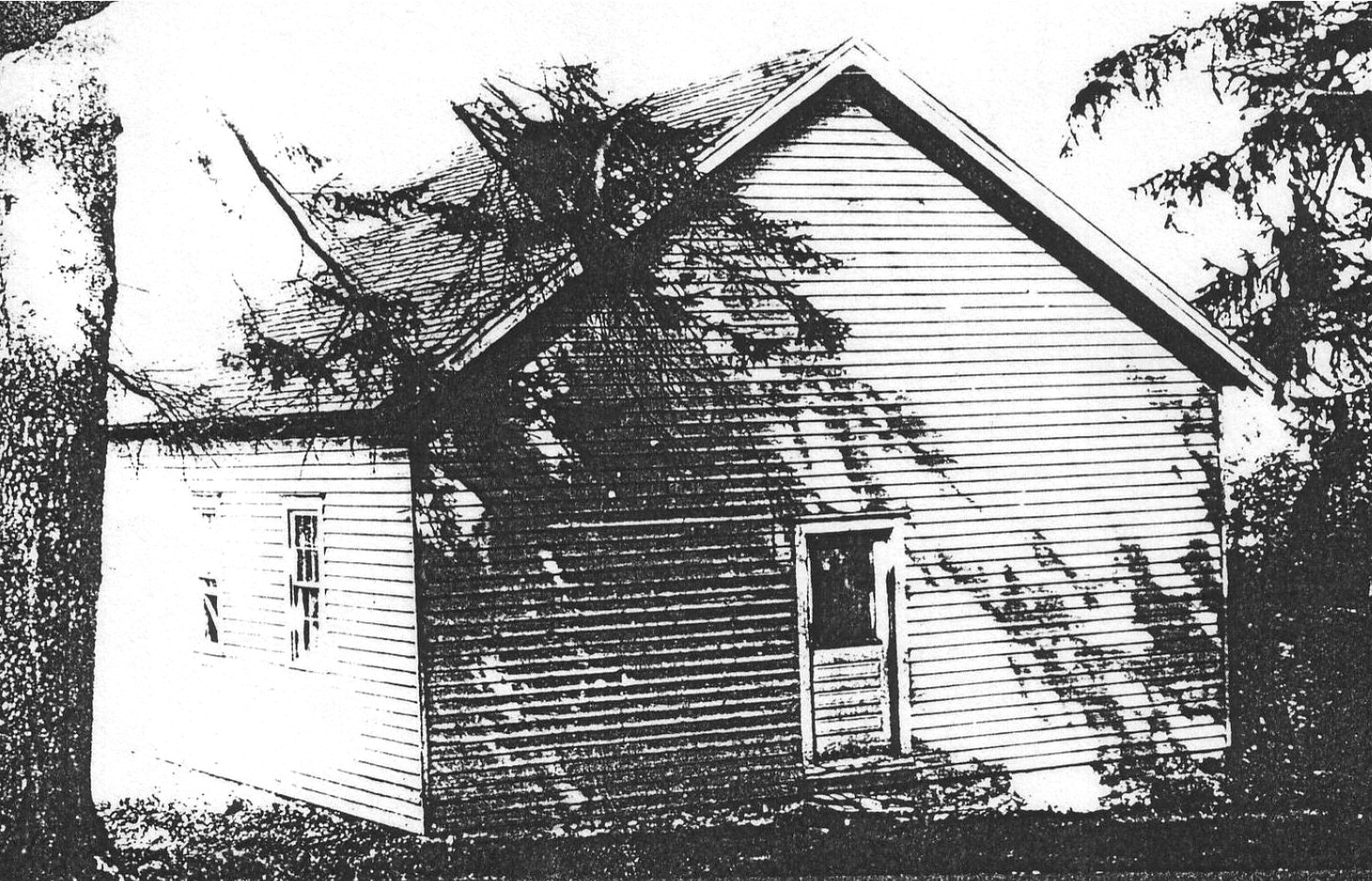 As Brush Run Looked When Initially Placed At Bethany 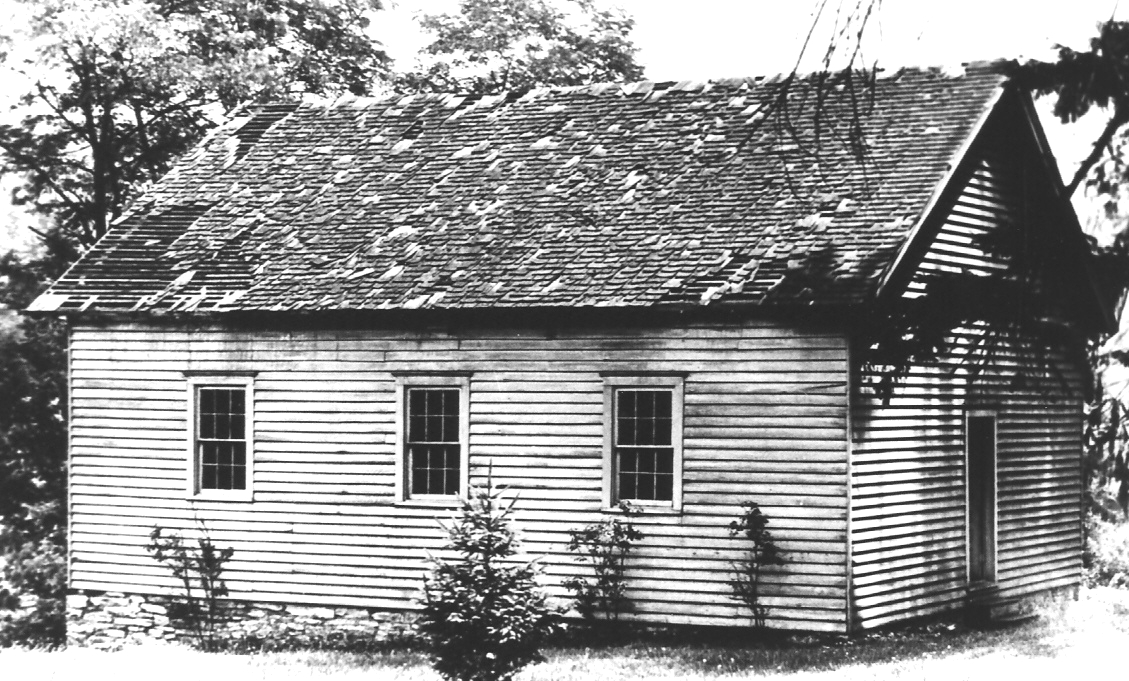 The Setting Of Brush Run Today 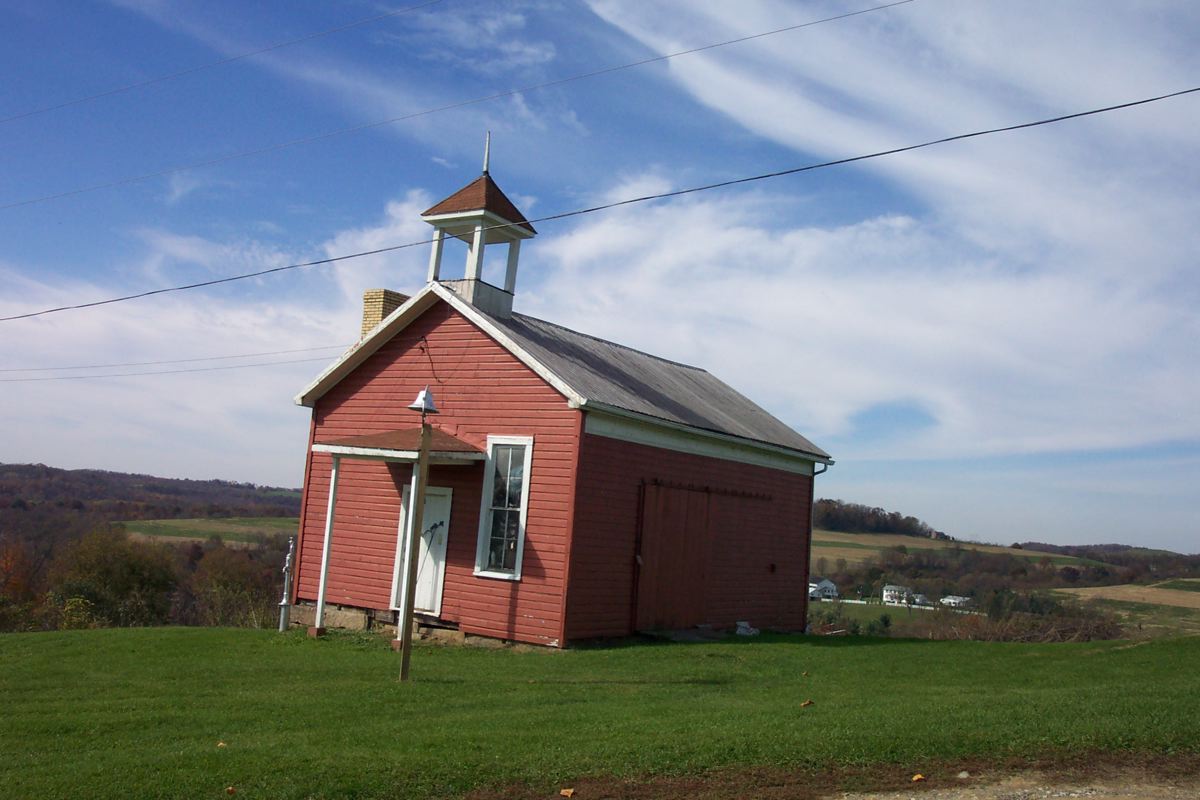 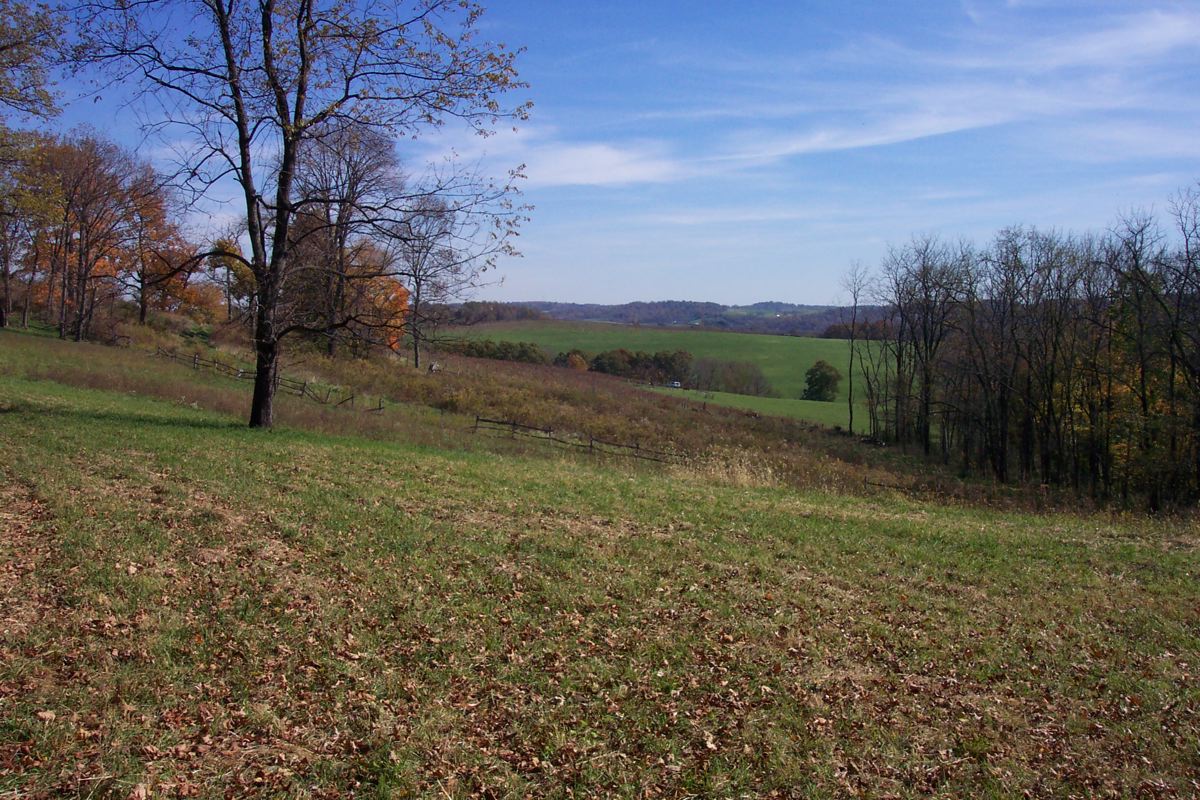 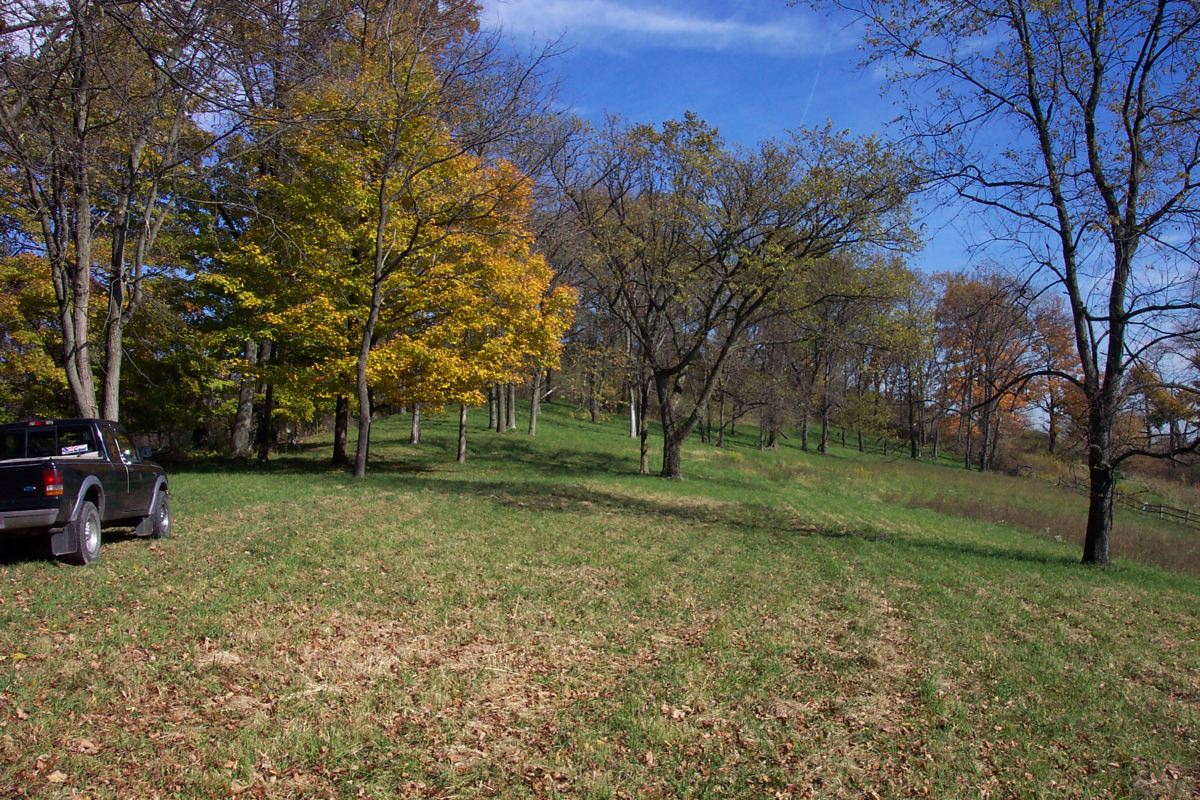 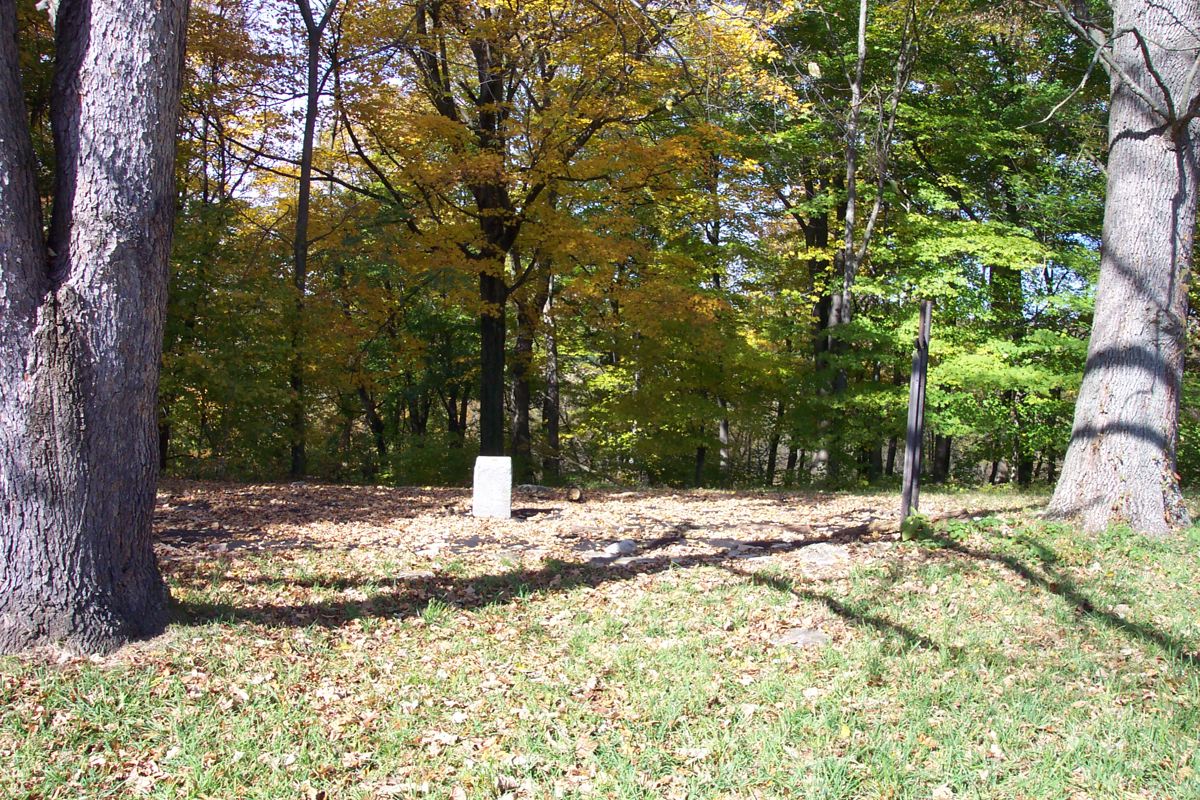 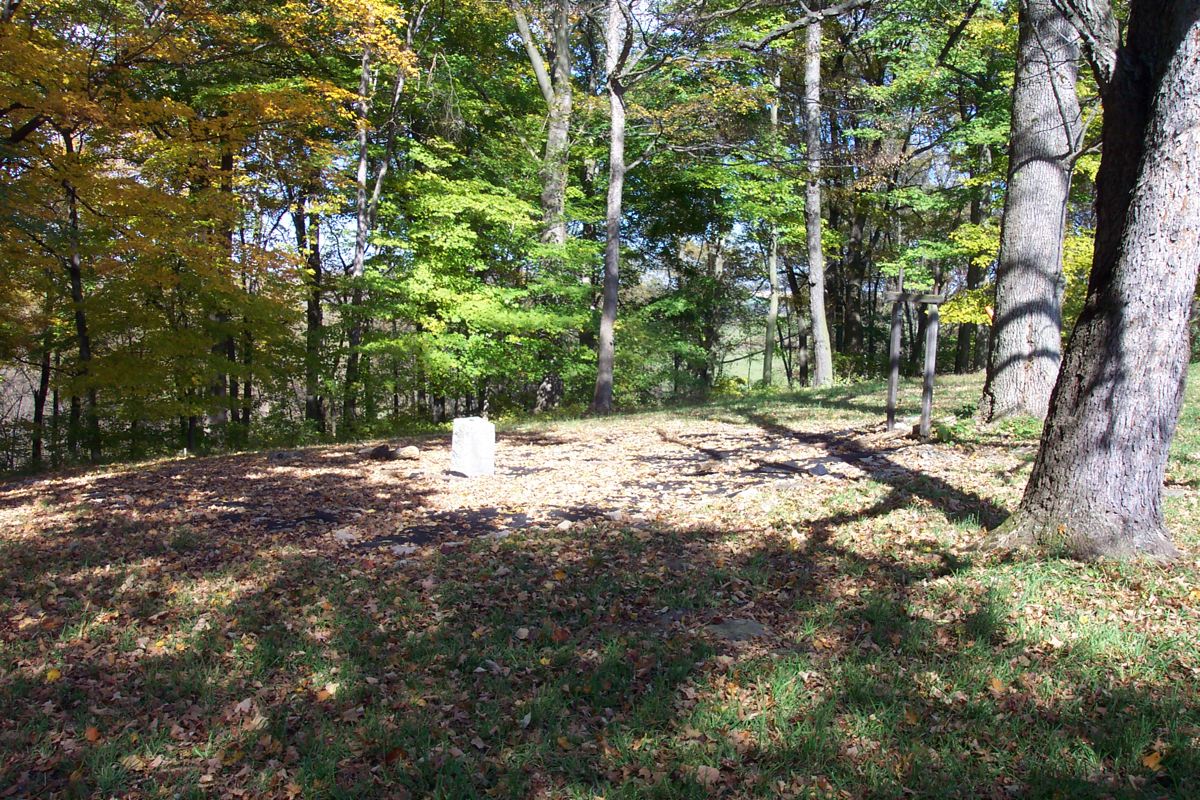 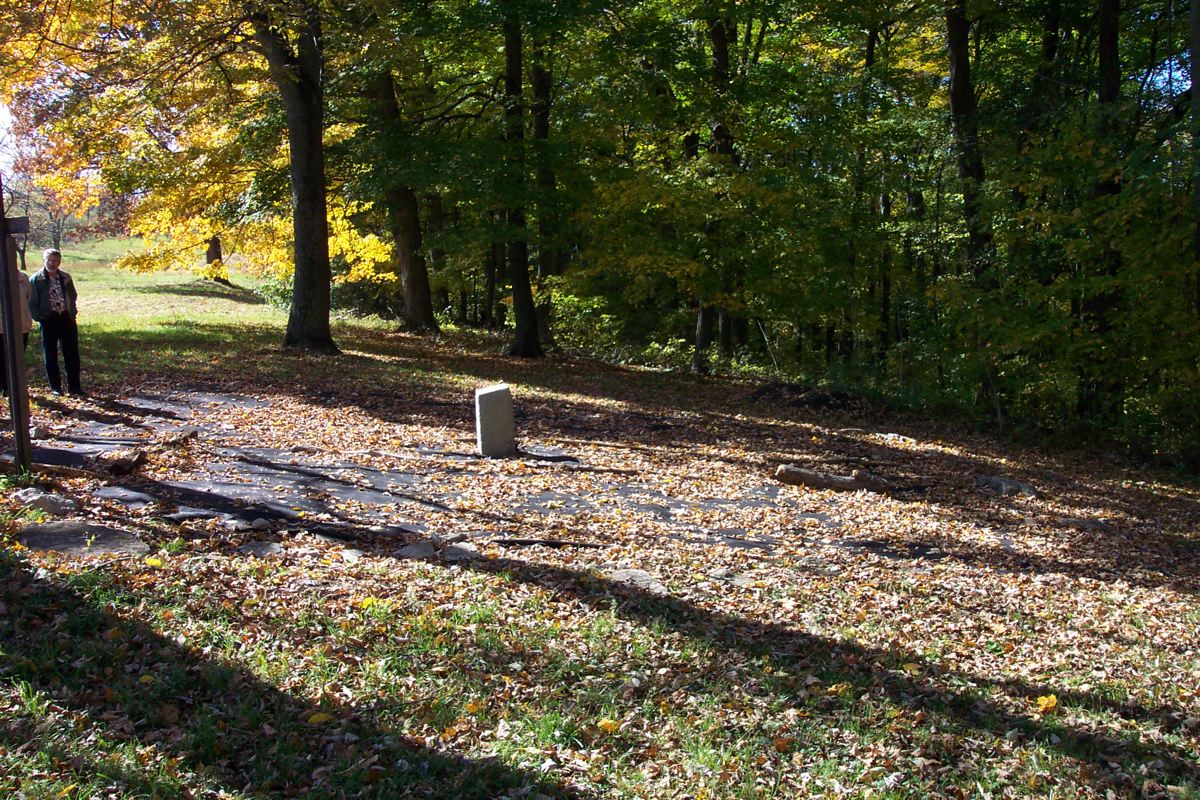 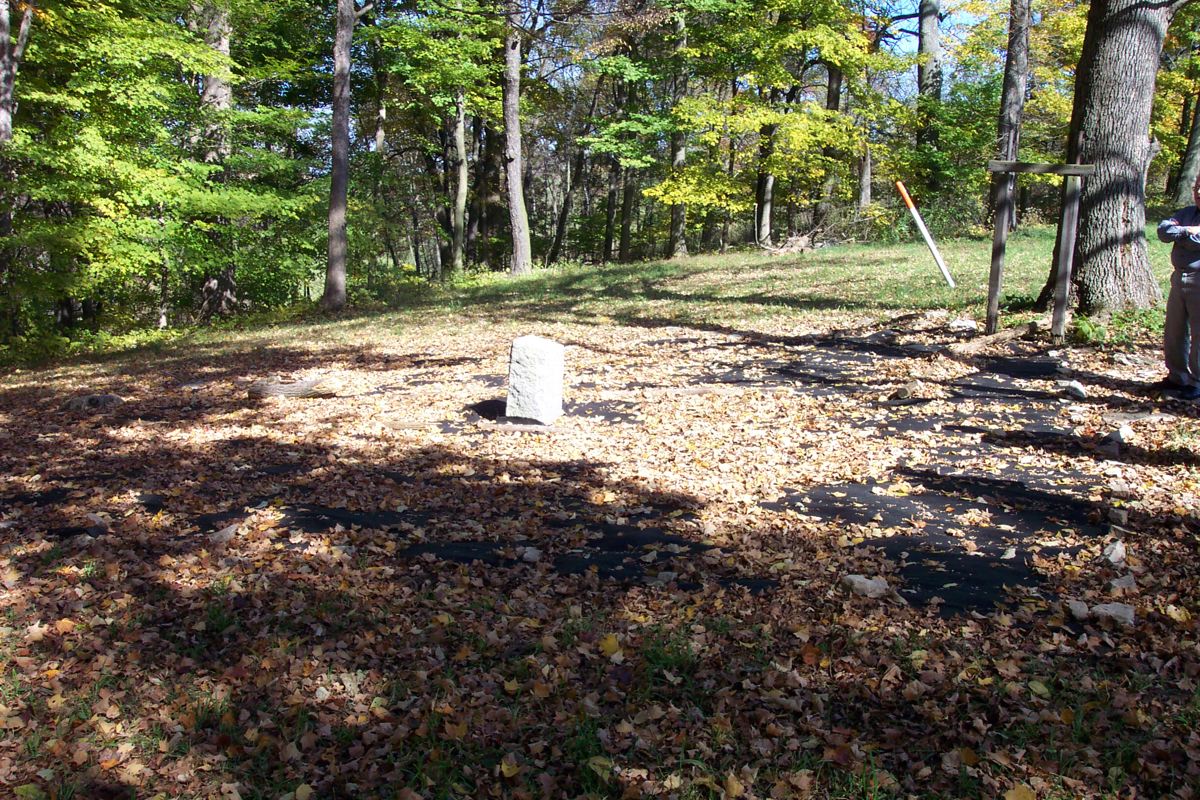 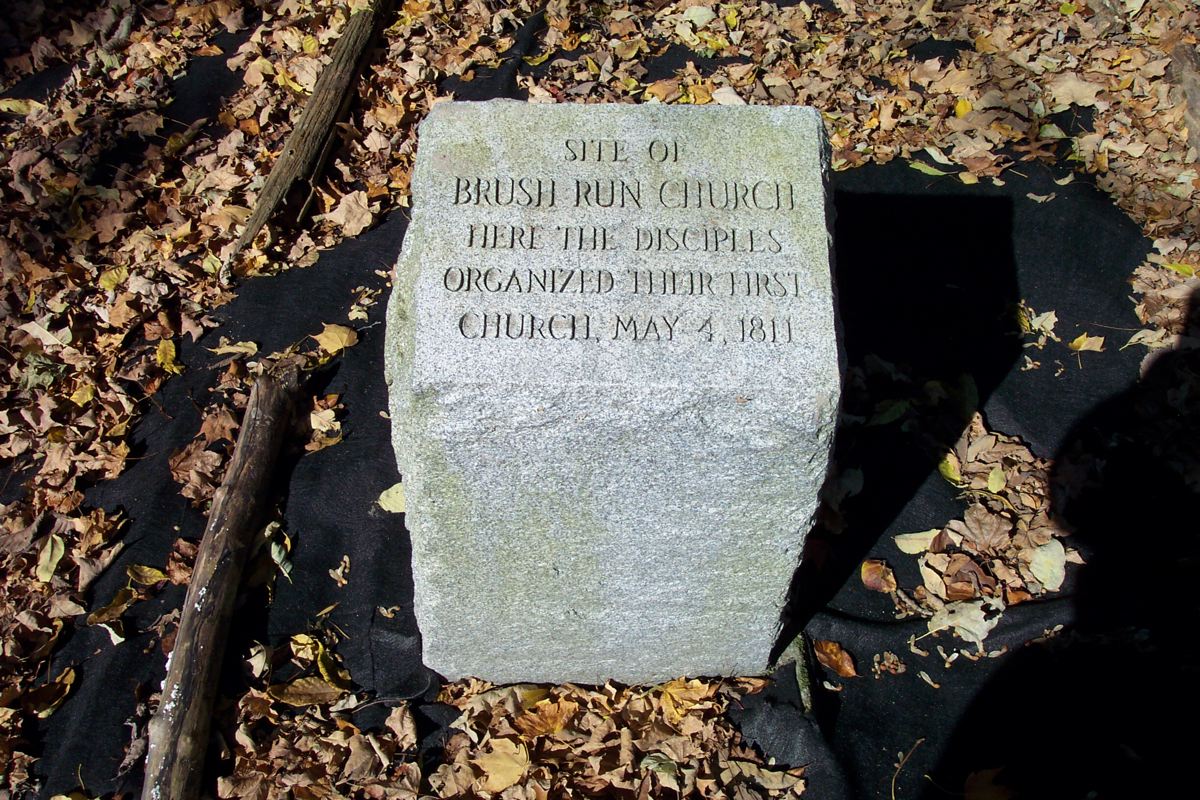 Site of
Brush Run
Organized Their First
Church, May 4, 1811

The photos just above of the present location of Brush Run were taken in October, 2003. My wife, Jenny and I were traveling with good friends
Terry and Barbara Straight. I was preaching in a meeting in Washington, Pennsylvania, where Terry's brother was an elder. Great friends! Great trip!