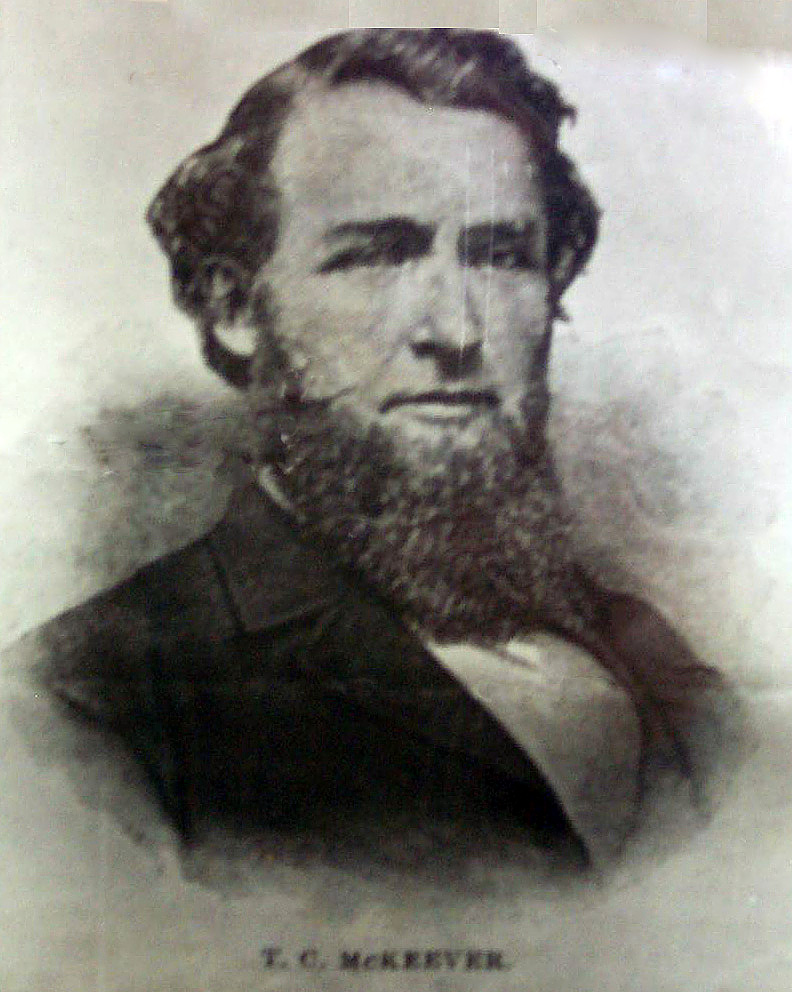 Thomas Campbell McKeever was born April 25, 1825, in West Middletown, Washington County, Pennsylvania. He was the second of nine children born to Matthew and Jane Corneigle Campbell McKeever. He was married to the former Martha McAyle, of the area. To them were six children: Ella (1849-1944); Emma (1850-1860); Jane Campbell (1851-1945); Alexander Campbell (1853-1939); Martha M. (1863-1957); Margaret A. (1865-1959). He was educated in his home by his mother, who operated a school for boys and girls in and around Middleton. His mother's great contribution to his life helped him to see the importance of education, for it was the family business. When he was grown, he attended Bethany College, founded and operated by his uncle, Alexander Campbell.

Upon graduation from Bethany College in 1845, T.C. McKeever entered the ministry. He preached in various places in Pennsylvania. He had a unique and impacting approach in preaching the gospel. Note some of the reference below enlisted in the Millennial Harbinger below that demonstrate such success.

The McKeever family will long be recognized for their involvement in the "underground railroad" before slavery was banned in the United States of America in the Emancipation Proclamation. Many northerners were engaged in assisting African Americans in their effort to escape their slavery. Only eternity will know the assistance Thomas McKeever and his family gave to people because of their abolitionist commitments.

T.C. McKeever was an educator. He served a number of years as a professor in the Mount Pleasant Female Seminary near West Middletown, Pennsylvania. The Female Seminary ran for about twenty-five years beginning in 1842. The matron of the school, and considered director was Thomas' mother Jane. Just a short time before his death, Thomas became the director of the school. Had he lived to a good old age, there is no telling what could have been accomplished. But, his life was cut short. In August 1866, he developed a serious illness in his stomach. Some sources suggested it was an intestinal infection, while other sources express that it was a ruptured appendix that finally took him after a two-week illness. He died early Sunday morning, August 26, 1866.

Presently, his burial location is unknown to this writer.

(Written for the Christian Standard)

DEAR BRO. ERRETT:—The sad intelligence of the death of our beloved brother T. C. McKeever, has ere this reached you by telegraph. A little over two weeks since he was attacked by that fatal disease, inflammation of the bowels, in a very violent form. From the very first, serious fears were entertained of the result as the attack was so very severe. His naturally very powerful constitution, and his strong, will and energy of spirit, bore up for a long time against the progress of the insidious disease. I saw him a few days after he was first taken ill, and felt at once that the worst was to be looked for; I had but slight hopes of his recovery. Although, during the first days, he suffered severely, his mind remained undisturbed and calm to the last hour. When told at last that his end was near, he called his father to him; told him to take charge of his young family and of the Institution, and then committed calmly and trustingly all he left behind to God. He died last Saturday morning at 2 1/2 o’clock. Yesterday we committed his body to the earth, No higher testimony could be given of the general public appreciation of brother McKeever than the immense multitude that attended his funeral. Such a vast number, seldom, if ever, gathered together on a similar occasion in this region. I have never witnessed anything like it. To one yet young, and but for few years comparatively, before the public, what a noble declaration of public estimation was this!

Bro. McKeever was really a very remarkable man for a noble energy of body and soul. He was one of the most active, untiring men I ever knew. When his mind was fixed on the execution of a purpose,—and noble pm-poses he always had before him,—no difficulties could break his courage and perseverance. He was so as a student, as an educator, and as a preacher of the Gospel. He graduated honorably at Bethany College in 1845. With excellent natural endowments, and rare opportunities of education in the school and the family, he devoted the mature years of his life to the work of education in the Female Seminary founded by his father and mother, and the preaching of the Gospel.—in both of these paths he was eminently successful. Pleasant Hill, under his charge was steadily rising in fame and prosperity; and as a preacher of the Gospel he was among the most successful in this land. Devotion to purpose and indomitable perseverance constituted the great elements of his character, and made all he undertook successful.

His passing away from our midst was very unlooked for. We feel that he has left a great void behind; and the general community feel this with us. The cause of education and of the Gospel have suffered a loss in his death. He was prominent among those w-ho are “ready for every good work,” and sympathize with and enter promptly into every enterprise for the advancement of the true interests of our race.

All in the home of Pleasant Hill are bowed low under the heavy grief; but the power of Christian faith and hope and resignation bear them up in this sad hour of trial.

Bro. McKeever was at his death a little over 41 years old.

The friends of Pleasant Hill Seminary will be glad to know that it will be conducted again by its original founders, and that nothing will be spare to make it worthy of public patronage.

Report Of The Evangelistic Work Of T.C. McKeever 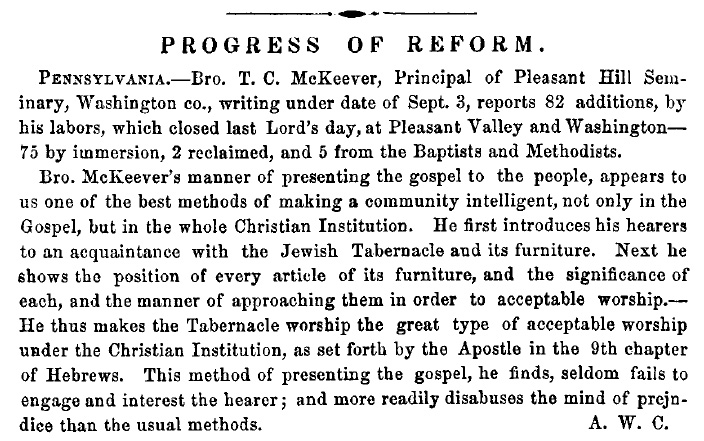 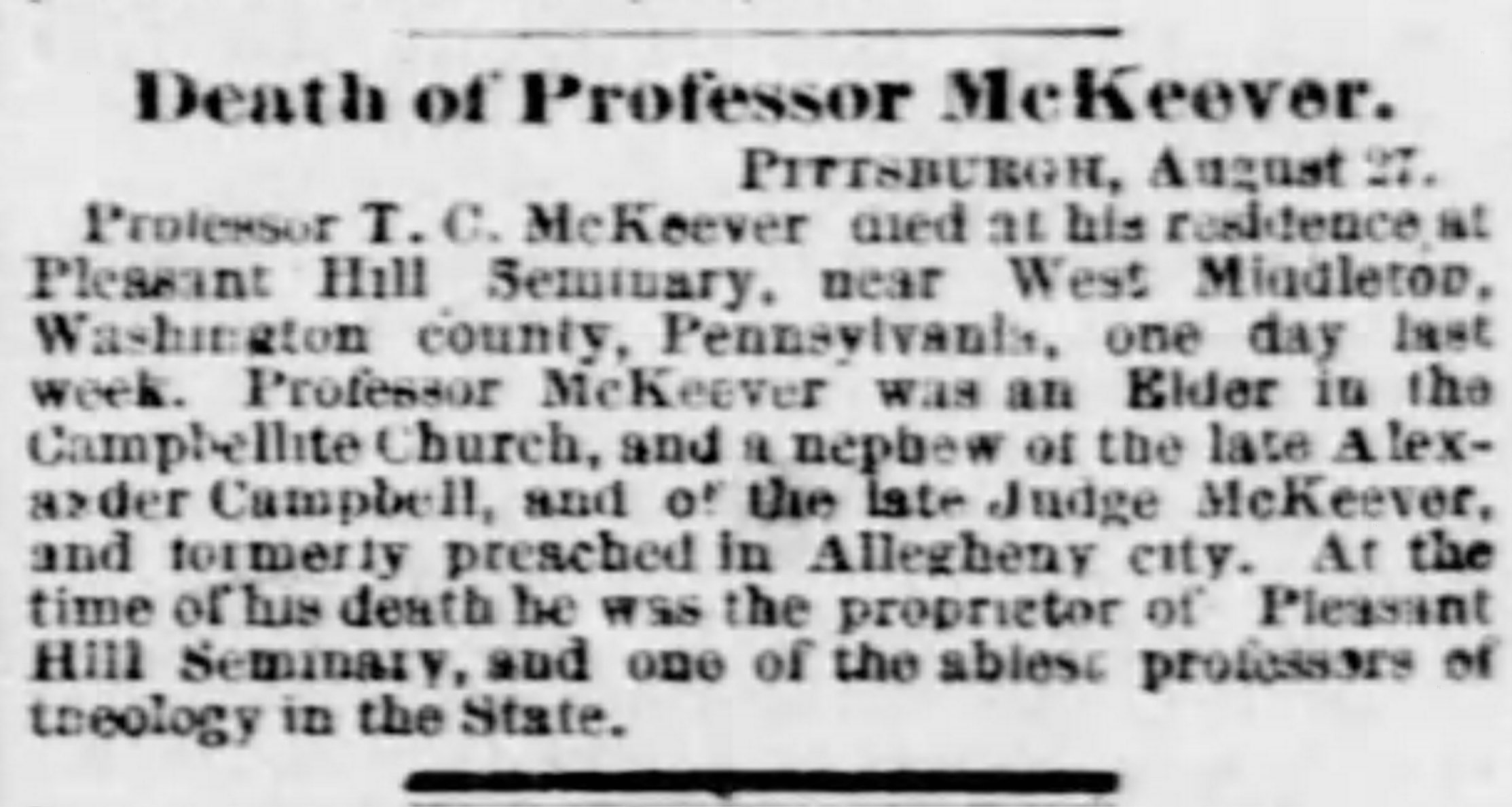 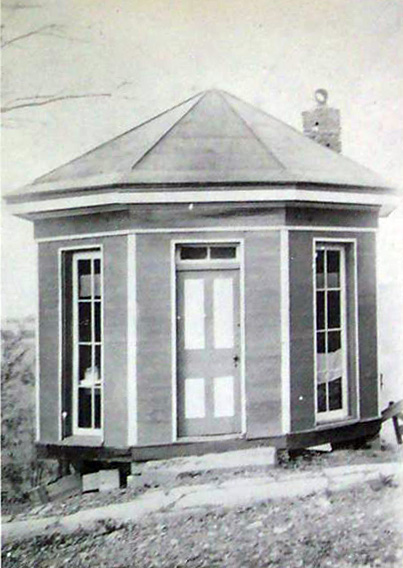 "During the palmy days of the old Pleasant Hill Seminary, when the Rev. Thomas Campbell McKeever, one of the pillars of the Disciple Church, was the principal, he built a study in the school grounds. It was an octagonal structure, fashioned like the offices of professional men in the "Sunny South." It had one door and three windows which extend down to the floor. In this comfortable and cozy study, the eloquent preacher prepared his sermons, conducted his extensive correspondence, and received callers and visitors. But that was almost a generation ago. Prof. McKeever died in 1866 and for years the study which was his retreat has been deserted, but the spirit of this utilitarian age has been felt even here and this old building is no longer permitted to remain idle and unused. It has been moved to town, placed on the main lot, and fitted up as a barber shop. On the classic walls, which once were adorned with the cultured McKeever Library, are now hung the razor strap, the towel rack and the locked glass; and the quiet study which was the favorite resort of the student and the scene of many intellectual triumphs, is now the theatre of many a word conflict concerning current gossip-which is amusing, if not edifying."

-A news item from West Middletown, Pa. in the Washington Observer, September 6, 1888 - I found this piece in the little McKeever Museum September 12, 2005.

Note: Today, the McKeever Study is directed by a local board of directors interested in the preservation of West Middletown history. The people of the town are committed to their history and its preservation. Contact Ellen Armstrong at rosegillfarm@gmail.com for more information.

Directions To The McKeever Study

From Wellsburg, West Virginia, take Hwy 27 west toward Washington. A few miles out of town you will come into the township of West Middleton. The McKeever Study will be on the left as you come into town.

Note: The location of the grave of T.C. McKeever is unknown. 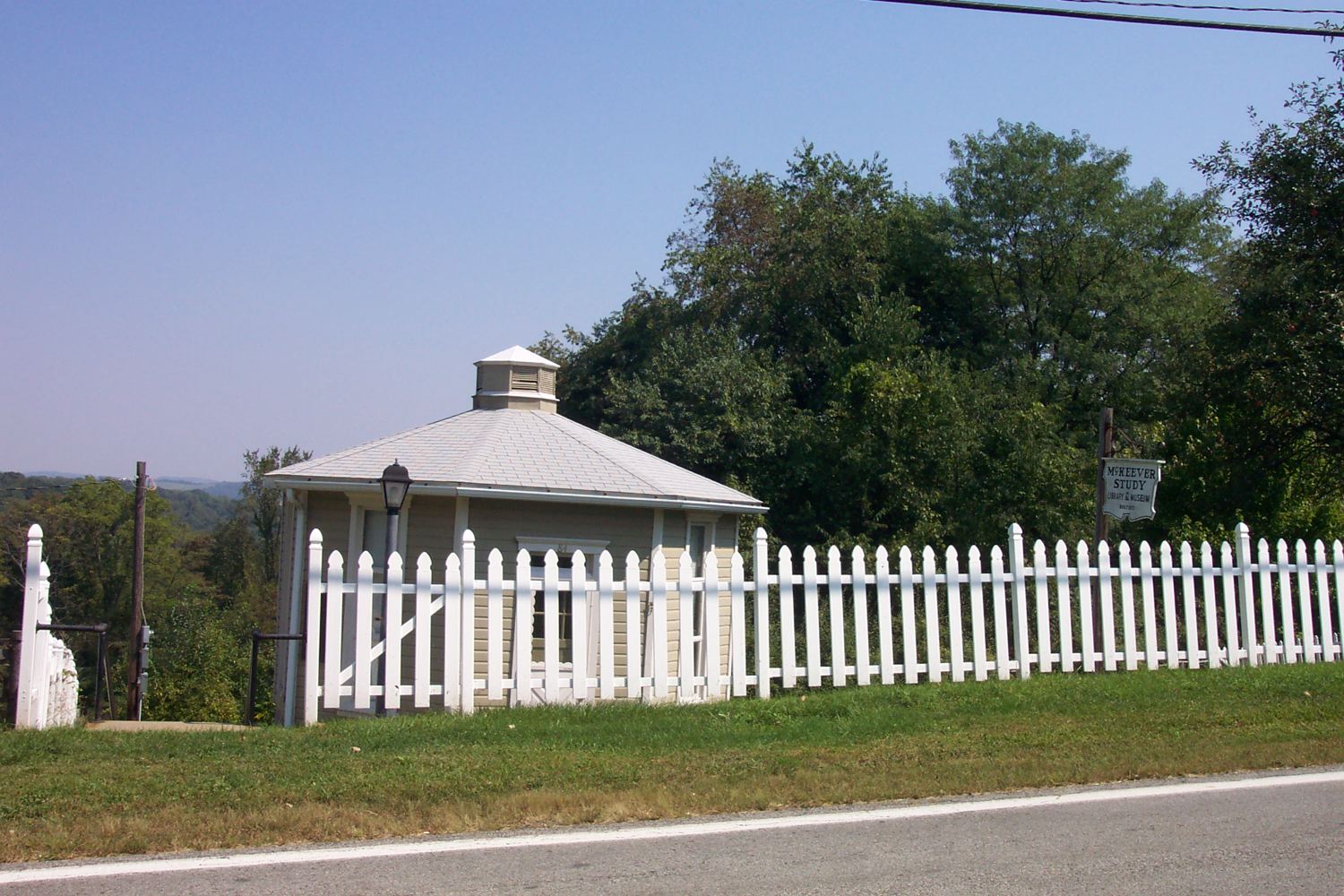 In September, 2005, it was my privilege to conduct a gospel meeting in Washington, Pennsylvania. My effort there had many wonderful dividends. Besides being able to spend time with some excellent Christian people, it was a joy to see some of the wonderful sites of the Restoration Movement. One day my wife, Jenny and I went through West Middletown, Pa., between Bethany and Wellsburg. As we were traveling through we couldn't help but notice this beautiful little octagonal building on the left hand side of the road. We pulled in and it was closed. We were there but a moment or two when a very nice lady pulled in behind us, and came and unlocked the door. We were so impressed with her kindness and willingness to show us around. The building houses some wonderful details from the past, and my hat is off to the community organizers of West Middletown for keeping it in use all these years.