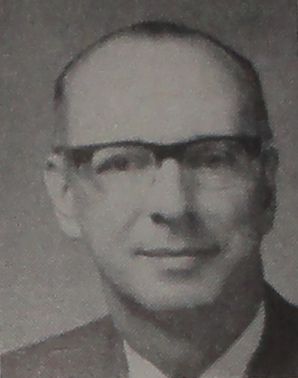 A Tribute To Dabney Phillips

Brother Phillips was born July 14, 1917, at Ridgetop, TN, which is located 18 miles north of Nashville. He graduated from high school at Goodlettsville in 1936. The associate of arts was received from David Lipscomb College in 1938. The bachelor of arts degree was received at Middle Tennessee State. George Peabody College granted him the MA. Another master's degree was received from Harding Graduate School in Memphis.

His love and fascination with this facet of the gospel prompted special research. This, coupled with his unique personality, caused him to be in demand across the brotherhood as a speaker on this subject.

In addition to teaching this as curriculum at Southern Christian University, he presented his lectures to numerous congregations and Christian colleges across the nation. In the field, he authored three books, Restoration Principals and Personalities, A Medley of the Restoration, and A History of Churches in Alabama.

His writings, both in articles and books, clearly display his love for the leaders and spirit of the effort to restore New Testament Christianity in its simplicity. He loved to recount the unusual stories of some of the lesser known men.

In loving the Restoration purpose he simply loved his Lord and his Word above all else. He wanted the Bible to be the standard of everyone's life as it was of his and nothing to ever detract from a plain and simple faith in it as God's divine message to all men and women.

-- From News And Notes, a journal published by Southern Christian University in Montgomery, AL

(Editor's note: Dabney Phillips was a writer for The World Evangelist. I am grateful for his many years of faithful service in the Lord's church. I am confident he now associates with many notable servants of God about whom he spoke and wrote in his work of teaching- Restoration Church History.) 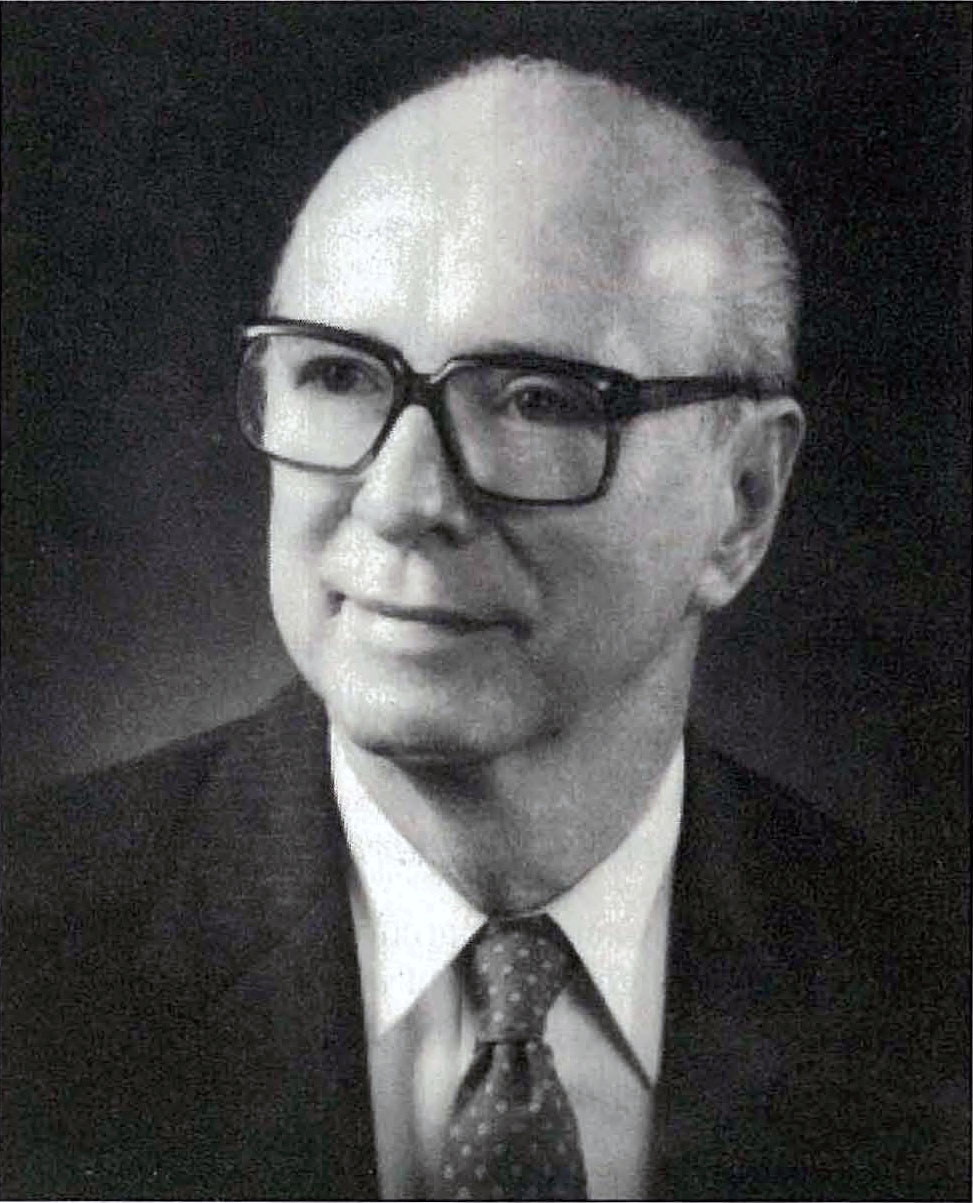 Dabney Phillips of Montgomery, Ala., a gospel preacher, star basketball player at David Lipscomb College in 193738 and later coach and teacher at Lipscomb High School for a number of years, passed into eternity March 9.

His funeral, declared a celebration by his family and friends, was conducted at Alabama Heritage Chapel March 12.

Willard Collins, lifelong friend; Ronnie Missildine of Pensacola, Fla., who considered Dabney his mentor; and Jeff Jenkins, pulpit minister of the College Church in Montgomery where brother Phillips worked on the staff during his last years, conducted the service. Phillips preached in local work, in meetings and special lectures on the Restoration for 52 years. He worked with these local congregations: Walter Hill in Murfreesboro, Tenn.; Donelson, Joseph Avenue and Pennsylvania Avenue in Nashville; Shandon and Chester in Columbia, S.C.; Gloster Street in Tupelo, Miss.; Sansom Avenue in Gadsden, Ala.; and Cloverdale, Lakewood, Landmark and College in Montgomery.

Dabney Phillips was the father of a strong Christian family. He married Wilma Adams- of Union City, Tenn. They were the parents of four sons: Robert (Bobby), Donald, David and Steve. The 10 grandchildren were a joy to Dabney and Wilma.

Martel Pace, a fellowworker in Montgomery, called Dabney Phillips a Restoration man. He presented restoration sermons to over 60 congregations, delivered lectures on this theme to six colleges, wrote two books on the subject and traveled widely to the homes of restorers. Pace likened him to Jacob Creath Jr., one of the restoration leaders, as one who would neither be bought nor sold and was one of the 'stuff' of which martyrs were made. Phillips admired Creath so much.

Dabney Phillips was a humble man with a single trusting faith. I agree with Martel Pace, who wrote, He simply loved his Lord and His Word above all else.

Wilma, his companion, was so caring and loving. His last days were not a quality life because of Alzheimer's disease, but she went the second and third miles until the end.

He was born July 14, 1917, at Ridgetop, Tenn. His father operated a grocery store for 50 year's, and he started the congregation in Ridgetop.

The late H.M. Phillips, a beloved gospel preacher, was very proud of his nephew, Dabney.

Dabney graduated from high school in Goodlettsville, Tenn. He received an associate of arts degree from David Lipscomb, the bachelor ofarts from Middle Tennessee State University, master of mts from George Peabody College and a second master of arts from Harding Graduate School of Religion.

He was buried at Serenity Gardens in Montgomery.

[EDITOR'S NOTE: Brother Phillips was a great encourager. He has been a personal friend and fellow-worker in the kingdom for more than 30 years. He has helped the Advocate greatly by writing many articles especially about restoration history, biographies and principles. He also encouraged many to subscribe. We will miss him.]

When Bobby Phillips left Tupelo, Miss., nearly 30 years ago to enter David Lipscomb College, he had the desire to be a doctor. While attending Lipscomb, Bobby began to receive weekly letters on a regular basis from his father, a gospel preacher in Tupelo. Thus, a relationship began with Bobby and Dabney—father and son. The letters were always written on Monday.

After graduation from Lipscomb, Bobby went on to medical school and then to residency requirements. He continued to receive the letters from his dad.

Dr. Bobby Phillips practices medicine now in Santa Barbara, Calif. His father's letters have continued to arrive each week for about 27 years. In this way, a Christian daddy has helped bring a college boy to manhood. On March 9 I received the message that Dabney Phillips had died. I flew to Montgomery to help conduct the funeral. Bobby anived from California Wednesday night and he met me at the airport on Thursday morning. On the way to the funeral home, he told me about the letters. The Monday morning letter writing is over. Bobby has received more than 1,300 letters from his dad, and he has most of these letters in safekeeping. From the '60s until 1991, this father has had a close visit with his son every week. The letters drew them very close. There are three other sons in the family, but they have spent their lives in the same geographic area as the father and mother. They were with their parents week by week.

WSMV is a popular television station in Nashville. The management team features regular announcements by individuals, I Am For The Family. I would like to add a thought and say, I Am For The Christian Family, and I salute the Dabney Phillips family of Montgomery, Ala.

Martel Pace, a gospel preacher in Montgomery who worked with Dabney, wrote of his passing, He wanted the Bible to be the standard of everyone's life as it was of his and nothing ever to detract from a plain and simple faith in it as God's divine message to all men and women. Such was the heart and soul of Dabney Phillips as I saw him through his writings.

My wife travels with me and hears many brotherhood problems discussed. She asked recently, Why can't people just read and listen to the Bible, as God's book, and live by it? I wish that they would. Dabney Phillips was one who did.

God, who at sundry times and in divers manners spake in time past unto the fathers by the prophets, hath in these last days spoken unto us by his Son, whom he hath appointed heir of all things, by whom also he made the worlds (Hebrews 1: 1,2). That is all!

Directions To The Grave of Dabney Phillips

The Phillips family plot is located in the Greenwood Cemetery in Montgomery, Alabama. From I-85 take that Ann Street Exit and go north. Immediately turn right on Chestnut Street. Pass the first cemetery on the left. Go to next cemetery, Serenity Gardens. Turn into the first entrance. Head to the second right. Go about a third of the way of the section and stop the car. Go in to the section on the right, section 4, Old Rugged Cross section. 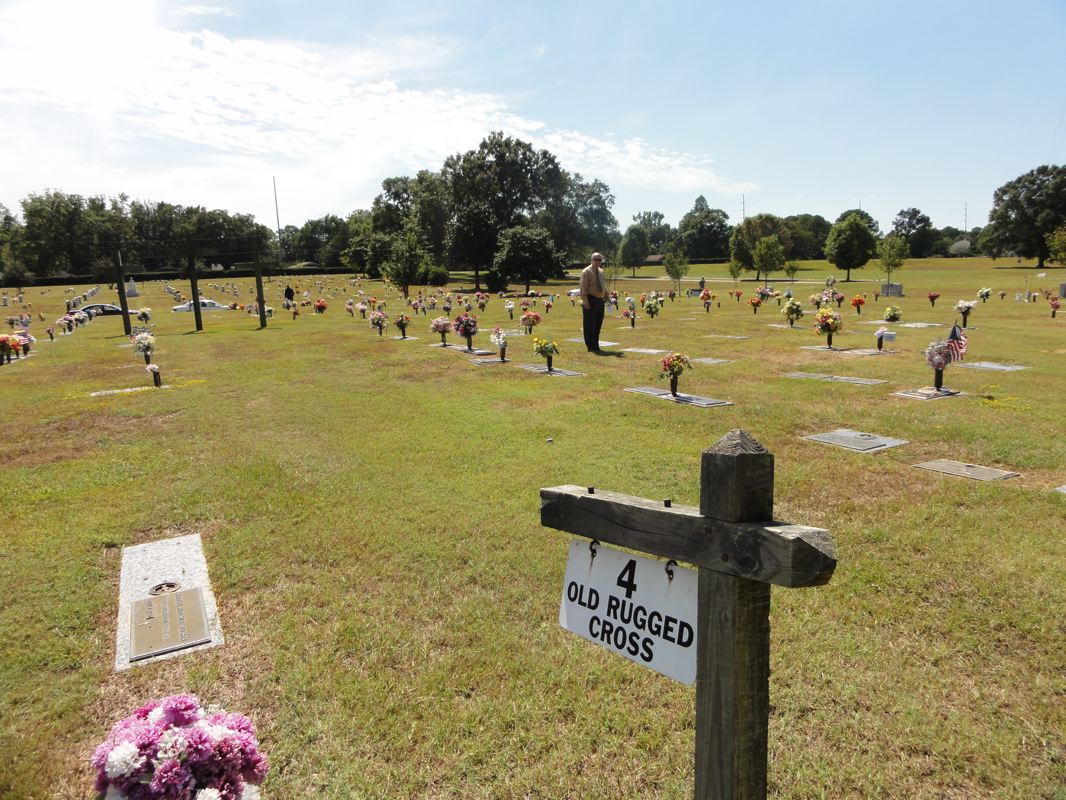 Richard T. Harp Standing By The Grave of Dabney Phillips 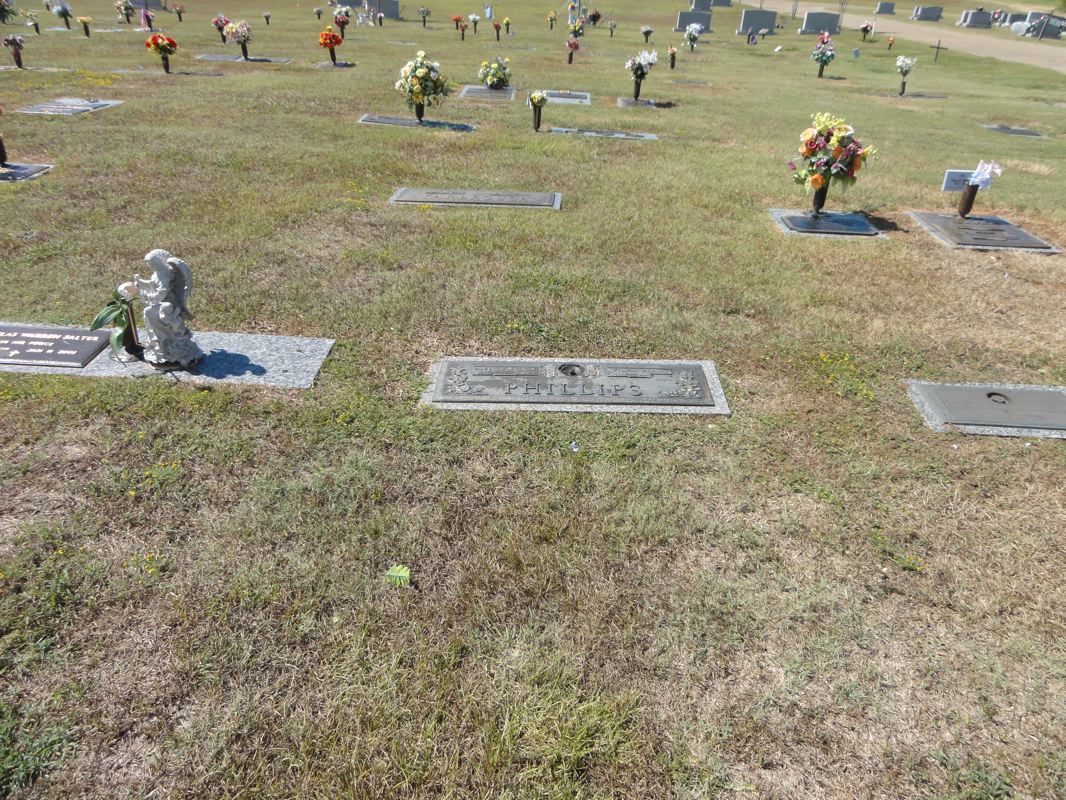 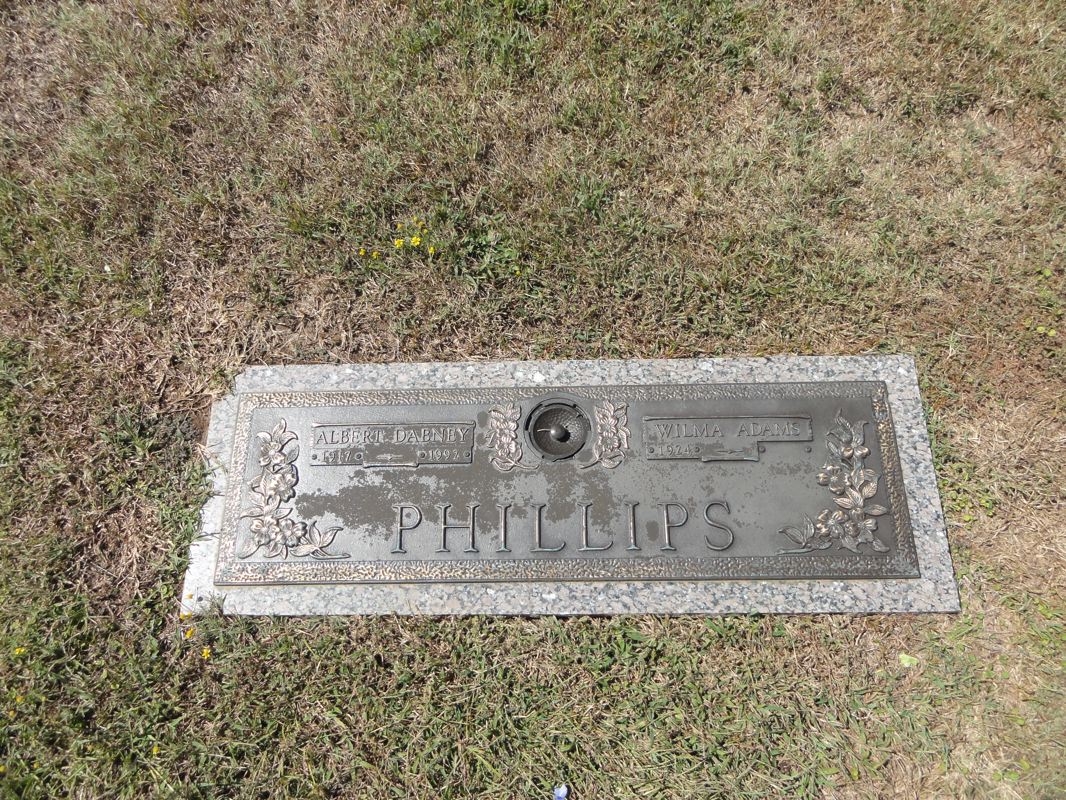 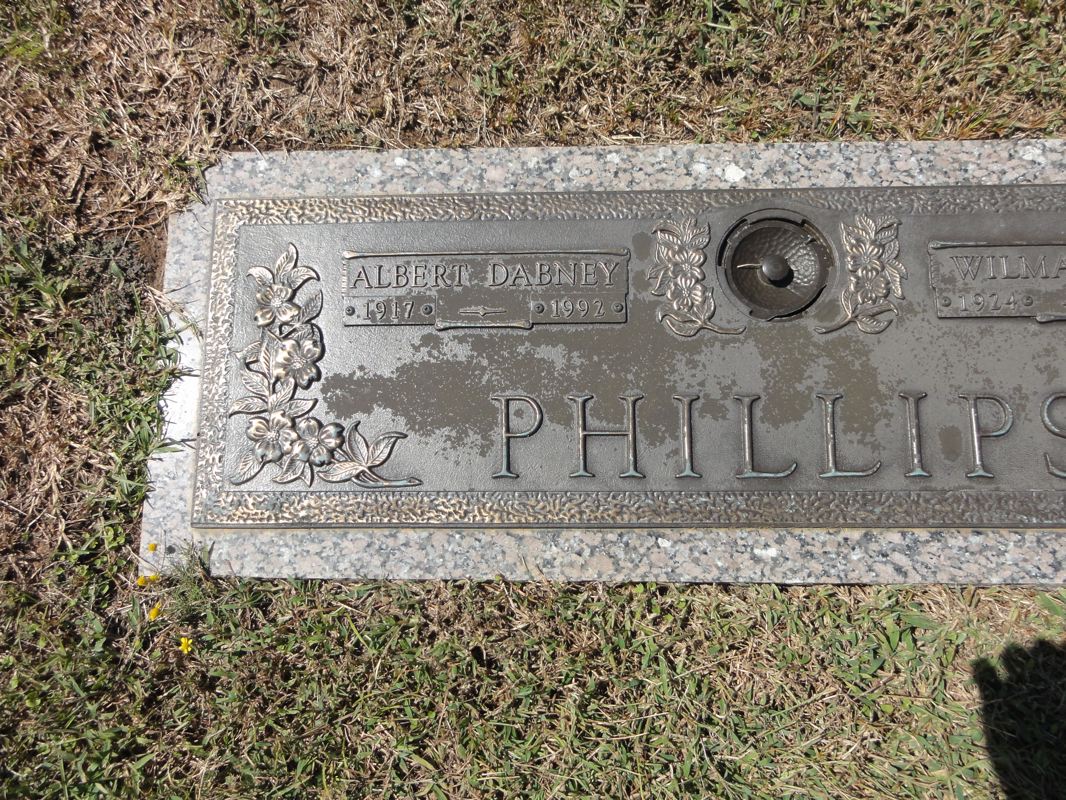