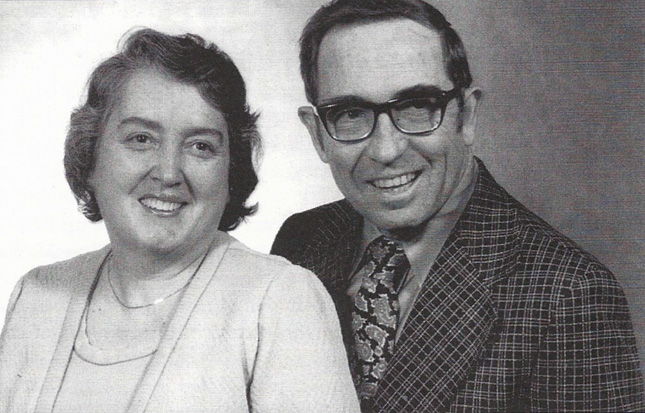 J. C. Townsend was born in High Springs, Florida, but grew up in Bell in a Christian home where the Bible was studied. Brother Cleve Moore was J. C.'s uncle.

Lu Evelyn Patten Townsend was reared in Miami, Florida. Lu was the eldest of three daughters. Their parents were faithful members of the Central Church of Christ.

When J. C. was ready for his junior year of high school, his father, having been told by many people how good Dasher Bible School was, decided to send him there.

The summer before Lu's junior year in high school, J. V. Copeland, Jr., who preached in Fort Pierce, came to Central and talked about Dasher. Lu's parents had never heard of it. But on the way home from church, her parents asked her if she would like to go. With only two weeks before school was to start, Lu said "yes" and made preparations for going 500 miles from her parents.

She met J. C. Townsend when she first arrived on campus. She quickly found that she could graduate in one year if she doubled up on the number of courses she planned to take. Lu saw in J. C. a young man who was really interested in the Bible and had a love for preaching God's word to others.

J. C. saw in Lu a poised, beautiful girl who loved God's word as much as he did. They fell in love, but knew there would be many years of school before they could marry if they fulfilled their dream of preaching God's word.

After graduation from college in 1947, they married and moved to Gainesville, Florida, where J. C. could pursue his master's degree. He preached at several congregations in the area. It was while he was attending the University of Florida that he decided to write his thesis on the "History of the Churches of Christ in Florida." He did the research but did not finish at that time. He later earned his master's degree from Harding. 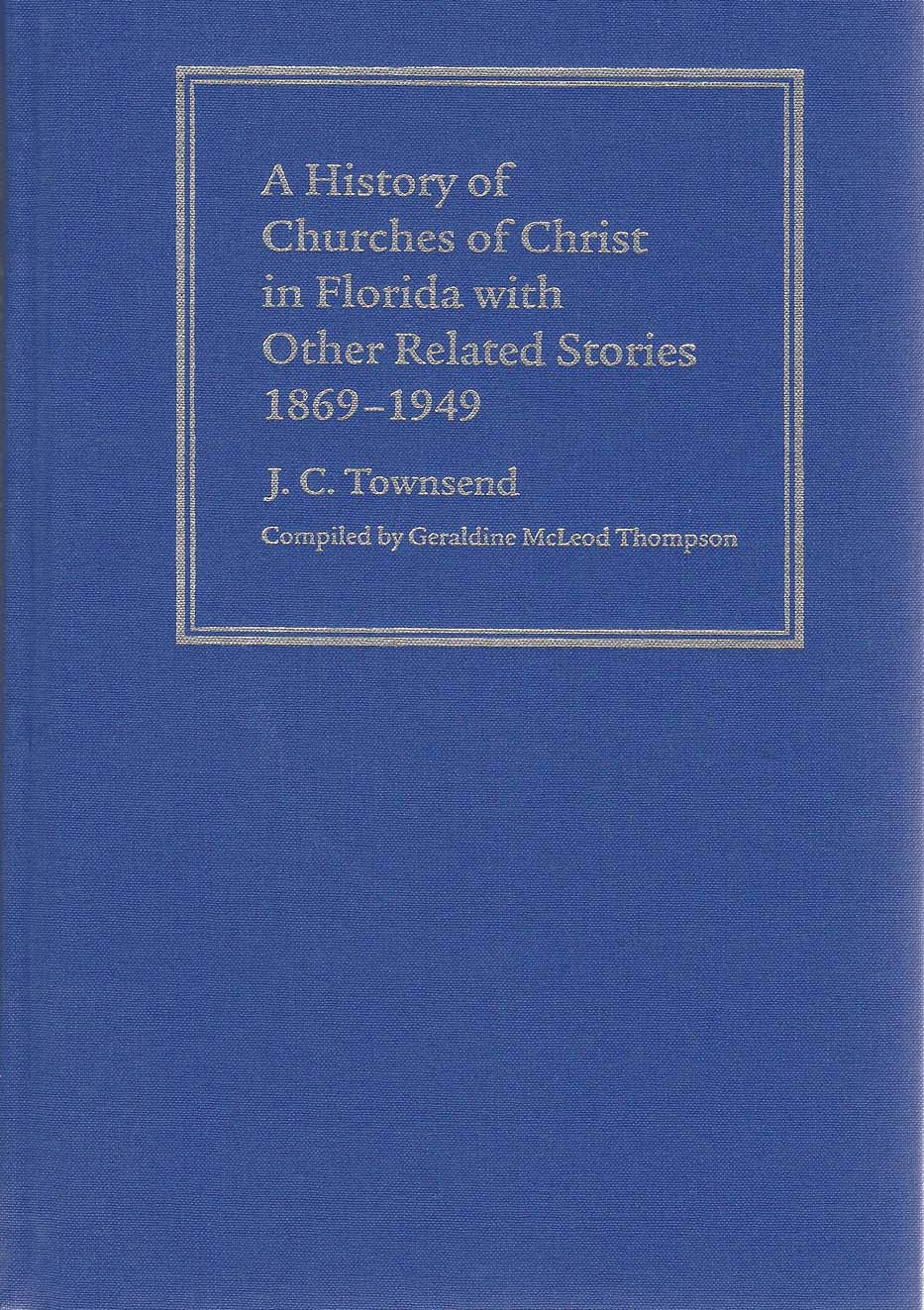 J. C. did all of the investigation of the histories in the summer of 1948. He and Lu traveled the state talking to pioneer preachers, elders, and the original members of most of the congregations in Florida. He was not able to use this information for his master's thesis at Harding. But they kept it and it is finally being published in this book.

Lu and J. C. lived many places where J. C. preached for local congregations. Lu became a great Bible teacher to young people. She is in her mid-seventies now, and the highlight of her week is teaching a class of children on Wednesday nights. She has also taught teachers how to teach the Bible. She used her home economics degree to teach in public schools. She was a very hospitable lady who opened her home to everyone. She would cook Sunday dinner and have visitors come home with them. Many of these guests obeyed the gospel after J. C. and Lu taught them the truth.

J. C. and Lu have two daughters, Nona and Martha. Nona is married to Bill Baker. The Bakers live in Eastern Europe where they work with a low-income, ethnic group. They have two children, Paul and Abbey. Martha is an author who lives in Memphis. Her daughter, Jessica, is a junior at Memphis State.

While living in Atlanta, J. C. preached at the Chamblee congregation, which is now the Chestnut Drive Church. The congregation started with twenty-five members and grew to six hundred during the ten years J. C. preached for them. While building the meeting house in the winter months, J. C. and one other man had to mix the mortar with anti-freeze to keep it from freezing. During the construction, J. C. taught and baptized the supervisor, the electrician, the plumber, and the man who did the drywall. While they lived in Atlanta, he showed the Jule Miller film strips almost every night. He even had them memorized. His efforts were richly rewarded. J. C. baptized forty members of one family: aunts, uncles, teenagers, and grandparents.

It was said if you didn't tell J. C. why you were not going to be at the Sunday evening service, he would be on your doorsteps the next day to see what was wrong.

J. C. asked the elders at Chestnut Drive to give him two weeks off with pay to work at the Florida Bible Camp each year, and they always did. After he left Atlanta, he always arranged with every church where he preached to get those two weeks off each summer to work at the camp. He and Lu visited the first session of the camp at O'Leno in 1948, and in 1949 they began a twenty-year tenure of service. He taught Bible classes and helped Lu run the craft shop. Brother Prevatt made rubber molds and the forms for them to stand in. If he saw something he wanted to use as a form in someone's home, he unabashedly asked to use it. After he made the molds each year, he gave them to J. C. who purchased plaster of paris in 100-pound bags. During the winter, he would make the items using these molds, and put them all over his basement to dry. When time came for camp, he would have them all packed and ready to go.

While J. C. and Lu were living in Memphis, Tennessee, he went down to the Mississippi River to watch the swift water roll by. He thought to himself, that old river just keeps on rolling along, and here I am, a young man, and I've been told that I'm going to die.

In January 1970, J. C.'s doctor told him he had Lou Gehrig's disease and could expect to live about six to eighteen months. He and Lu had two teenage girls, and J. C. had ambitions of pursuing his doctorate. These along with many other things weighed heavily on their hearts. J. C. made a decision to live every day, every hour, and every minute he had left, to the fullest for the Lord.

This attitude and the providence of God took over his illness, and he lived until January 15, 1999 - about twenty-eight years longer than his doctor predicted.

J. C. preached thousands of sermons after being diagnosed with the disease and for many years served as language, history, and Bible professor at Alabama Christian School of Religion. To accommodate some of his students, he gave his personal time and taught Greek and Hebrew classes in his home.

Lu stood by him but never robbed him of his independence and his dignity by taking over the things he could do for himself. He drove his own car until 1990, when he reluctantly took to his "little rascal" and sometimes a wheelchair. Lu became his legs and his arms, and without her he could not have accomplished all that he did. She helped him with the many aids he used in teaching and preaching. Her skill in developing teaching materials is recognized by many who have attended her workshops.

J. C. did not complain or ever show signs of being ungrateful. When not in the classroom in a serious study, J. C.'s students were often relaxed by his sense of humor. He had a repertoire of jokes a "mile long."

J. C. and Lu loved the Lord, and each other. She had to do many things for him in the last years of his illness that would have strained many marriages, yet she did everything with love and no complaints. J. C. was a scholar, a gentleman, a man without guile and most unselfish. Even in death he was giving, in that he donated parts of his body for the research of ALS.

When J.C. Townsend passed away, his body was cremated, and the ashes were scattered off the coast of South Florida. It is unknown as to whether a plaque or monument was ever placed in any cemetery.

Web Editor'sNote: I first became aware of J.C. Townsend when one of the members where I preach, Carol Elliott, one day in October, 2014 asked why brother Townsend was not listed on my website. To this I responded saying I could not recall ever having heard of him. She then proceeded to tell me that he had baptized her many years ago at the Chestnut Drive church of Christ in Doraville, Georgia, where she and her husband Bob attended. So, doing a little research, I came to realize that I had heard of his name, but had forgotten it. He had written a book on the history of churches of Christ in Florida, a copy if which I had never purchased, but had always wanted. I finally acquired a copy of it in which was contains a good biographical sketch on his life. That sketch has been reproduced above. I have much to be thankful for in brother Townsend's life and dedication. You see, Bob and Carol Elliott started the congregation where I preach in Buford, Georgia, in the basement of their home a little over forty years ago. Today, Buford church of Christ has a membership of over 700. If J.C. Townsend were alive, I am sure he would be pleased to know what one baptism many years ago has brought to fruitian to this day. The power of one! The saying is really true that little is much when God is in it.