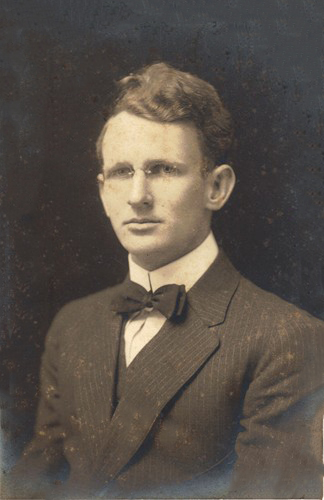 John Pearl Prevatt was born in Levy County, Florida November 3, 1888. He was the son of John Marion and Irene Frances Studstill Prevatt. He was married to Ida Mable "Jenny Ribbon" Jones on August 19, 1914. They had three children, J.P. Prevatt, Jr., Laurene, and Alleta.

John was baptized by R.L. Cramer in 1902. He received the B.S.E. degree from the University of Florida in Gainesville in May, 1906. He studied under the great James A. Harding at Potter Bible College where he was graduated with the Masters Degree, September, 1907. While there he began teaching some classes under Harding's direction.

Brother Prevatt traveled much in the state of Florida establishing and strengthening church works in different locations, directed by the High Springs and Alachua churches from 1948-1949.

He held gospel meetings all over south Geogia and northern Florida. When he was not preaching meetings, he was leading singing for them.

He taught in colleges and began schools. While in Bowling Green, Ky, he taught at Potter Bible College. From 1913-1914 he taught English, Logic & Mathematics at Cordell Christian College, in Cordell, Oklahoma. In 1914 he moved to Dasher, Georgia and began Dasher Bible School, serving as first president. He continued there until 1928. He returned to Dasher in 1947 as president for a brief time.

Brother Prevatt preached on the radio in a number of cities in Florida: in Tampa; in Gainesville; in West Palm Beach; in New Smyrna Beach; in Ocala; in Palatka; and in Jacksonville.

In all, the state of Florida stood as the greatest recipient of his focus in ministry most of the years of his life. He baptized hundreds of people into Christ, including many who became ministers of the gospel. One of these was Charles Adair Chapman, who followed along brother Prevatt’s footsteps as encourager to many works in Florida during his preachig career. Others, include Tom C. Brown, Robert A. Grissom, William Harold Driskell, Steve Hudgins, Benjamin C. Morton, and Jasper G. Malphurs.

Brother Prevatt passed from this life March 13, 1966, and was buried near the home of his birth, at Ebenezer Baptist Church Cemetery in Chiefland, Levy County, Florida.

-Scott Harp, Source material: Preachers of Today, Volume 2, page 353. Note: It was my good pleasure to visit the graves of brother and sister Prevatt in October 2019. My wife Jenny and I were heading home from out daughter's home in St. Petersburg, Florida. While here we visited the graves of the J.H. Holbrook family. 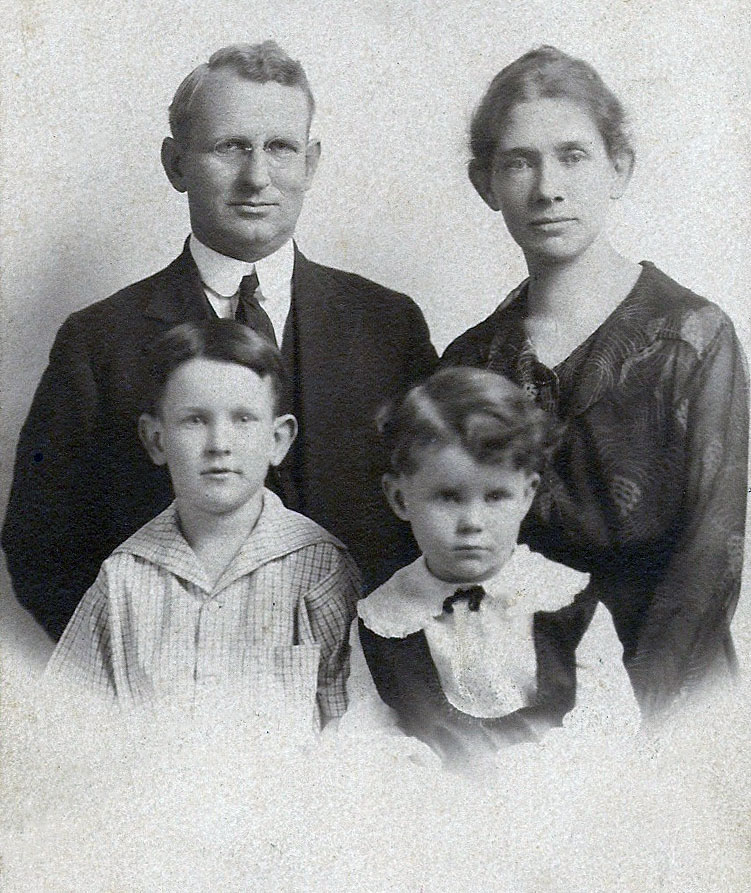 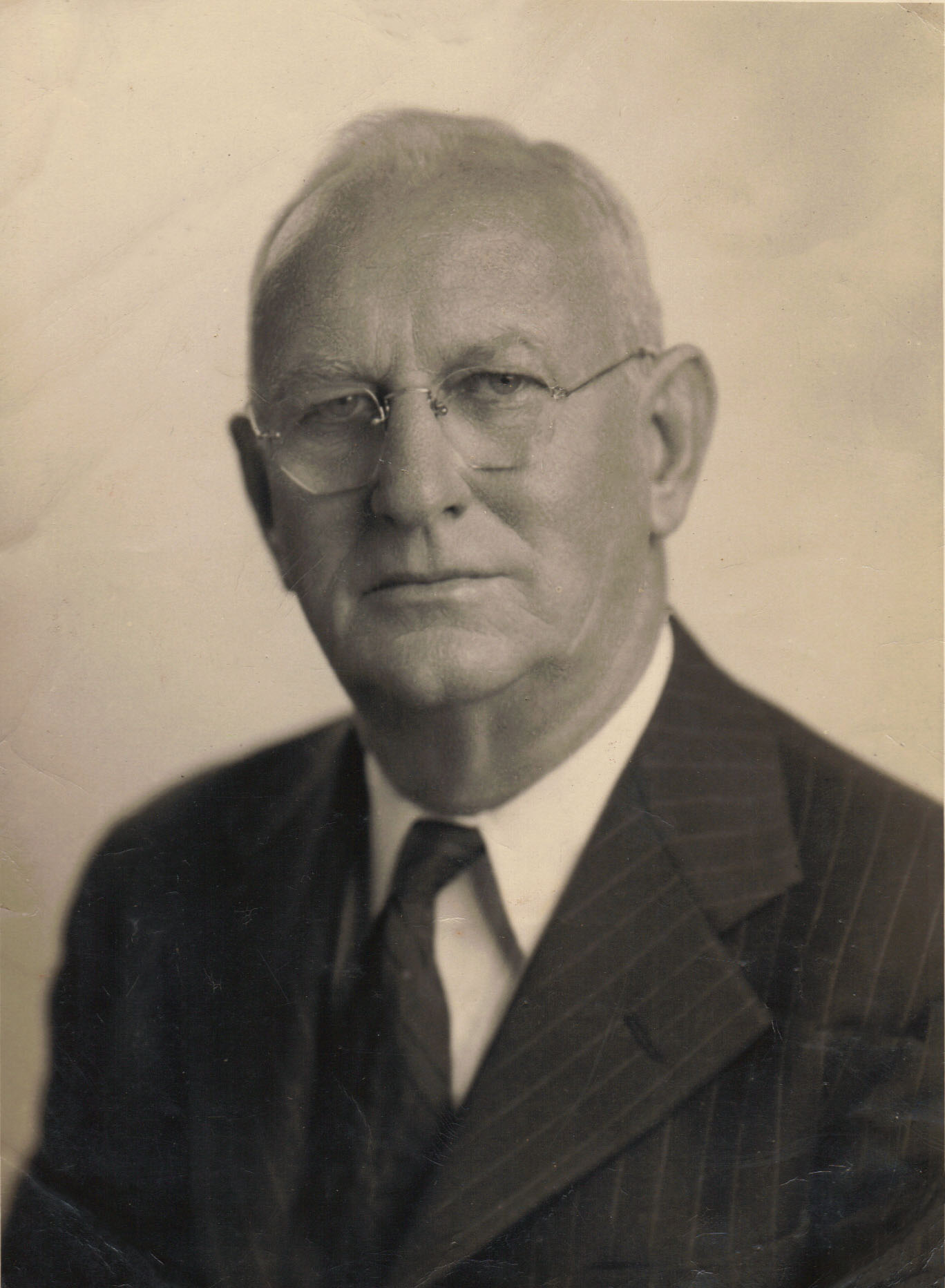 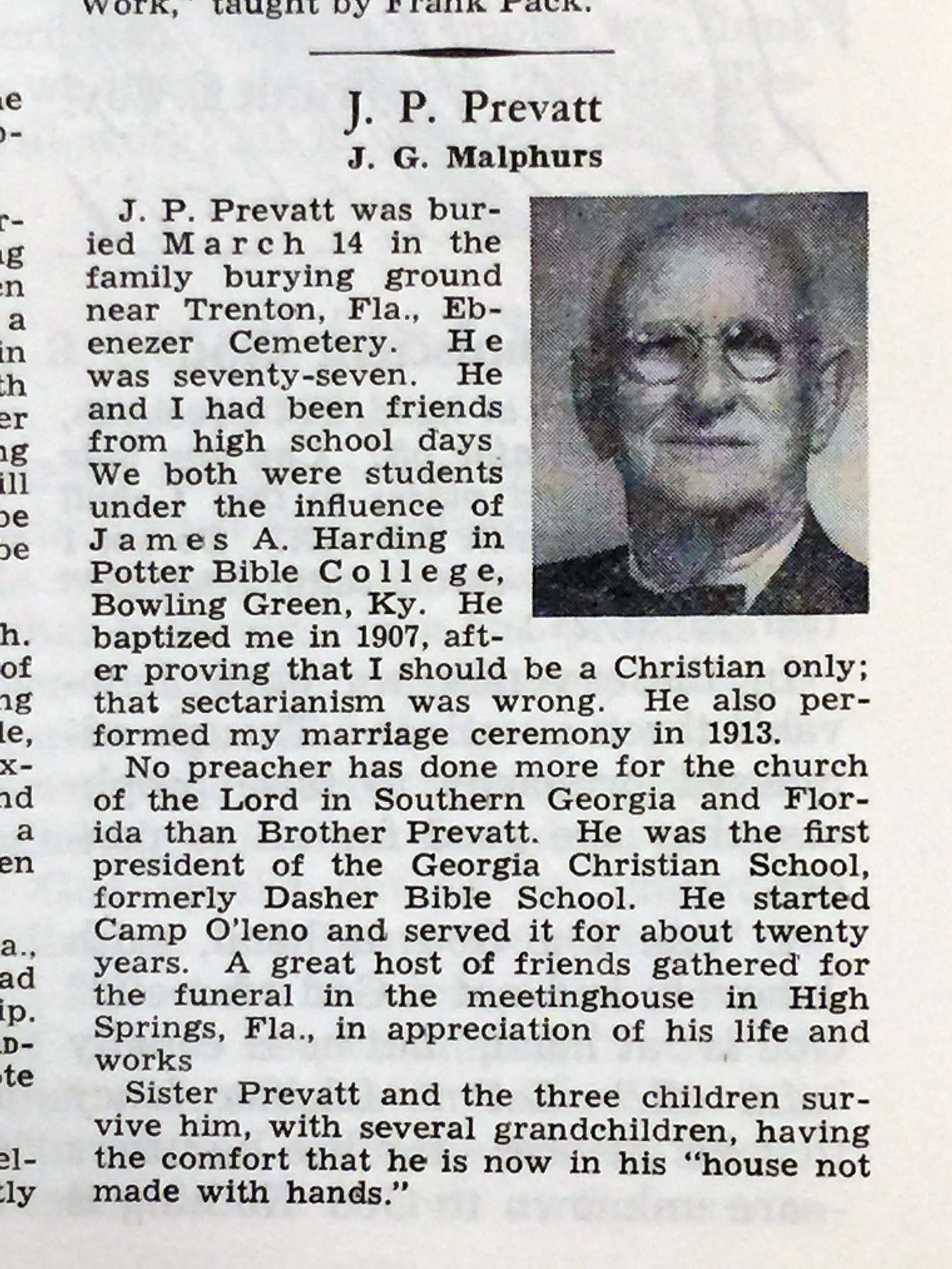 J. P. Prevatt was buried March 14 in the family burying ground near Trenton, Fla., Ebenezer Cemetery. He was seventy-seven.  He and I had been friends from high school days.  We both were students under the influence of James A. Harding in Potter Bible College, Bowling Green, Ky.  He baptized me in 1907, after proving that I should be a Christian only; that sectarianism was wrong. He also performed my marriage ceremony in 1913.
No preacher has done more for the church of the Lord in Southern Georgia and Florida than Brother Prevatt.  He was the first president of the Georgia Christian School, formerly Dasher Bible School.  He started Camp O’leno and served it for about twenty years.  A great host of friends gathered for the funeral in the meetinghouse in High Springs, Fla., in appreciation of his life and works.
Sister Prevatt and the three children survive him, with several grandchildren, having the comfort that he is now in his "house not made with hands."  (Picture included)
J. G. Malphurs, Gospel Advocate, March 31, 1966, page 204.

In Florida heading south of the city of Gainesville on I-75, at Mile Marker 385, take Hwy 24 (Gainesville/Archer) Exit #75. Head west on Hwy. 24 toward the city of Bronson. From I-75 it is 19.4 miles to Bronson. In Bronson you will come to a traffic light, the cross road of which is SR500/Alt-27. Turn right heading north out of the city. Go 3.2 miles and Alt-27 bears to the left. Stay straight and enter CR 339A. Go another 3.5 miles on CR339A and turn right on NE 120 St. (Note: If you turned left here you would be on CR320). On The Corner is the sign of Ebenezer Baptist Church. Travel down NE 120 St. .6 mile and bear to the left. You will see the church building off to the left. Continue traveling past the front of the building and you will be between the building and the old cemetery. Enter into the gate, and the Prevatt family plot is just to your right. J.P.'s parents are next to his plot, and other Prevatt's are closeby. Also buried here is long-time preacher, and graduate of Mars Hill College in Florence, Alabama, J.H. Holbrook. From The Prevatt grave look toward the back of the cemetery. The Holbrooks are right in the middle. Look for 3 monuments side by side. J.P. Prevatt. 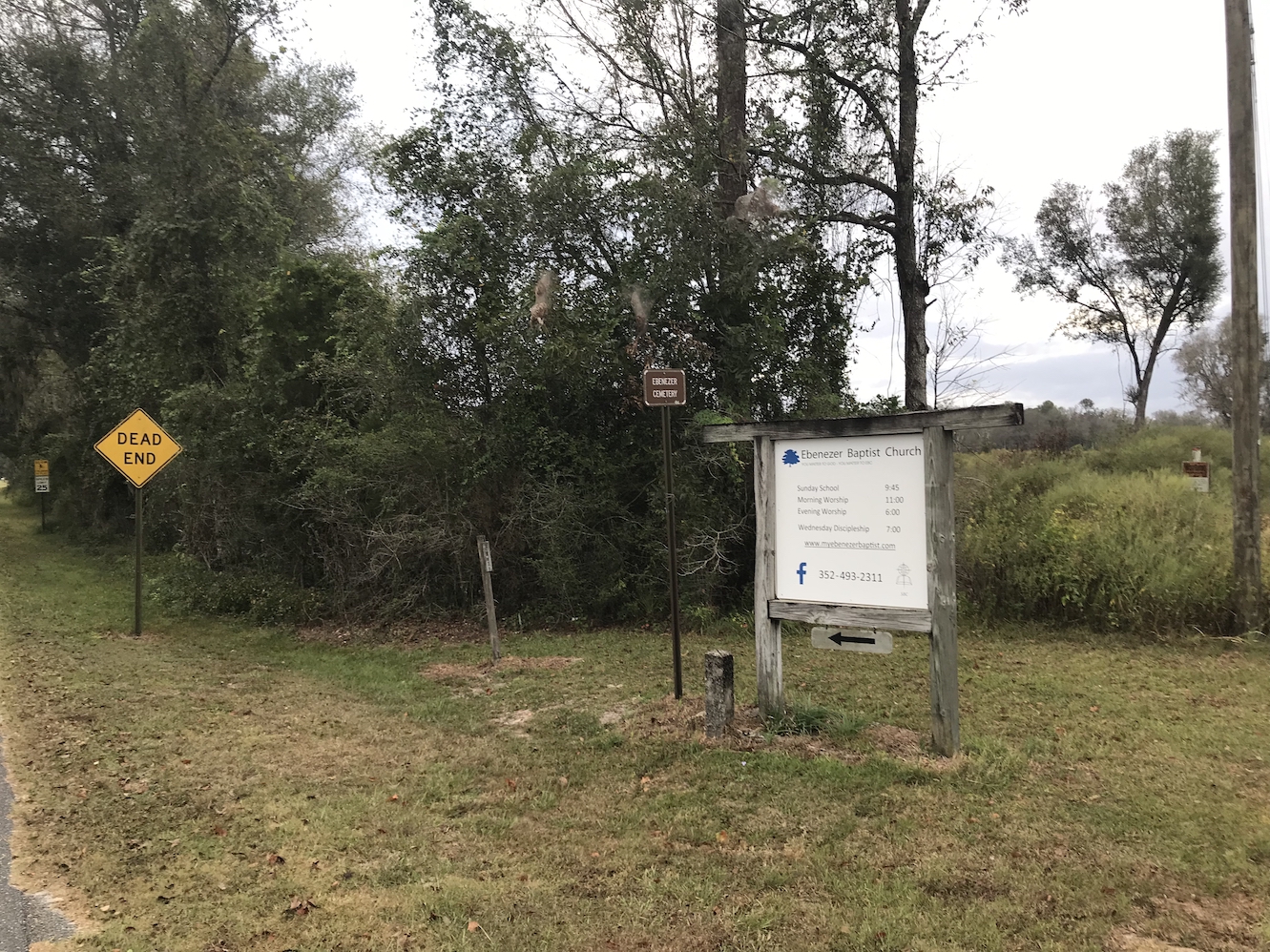 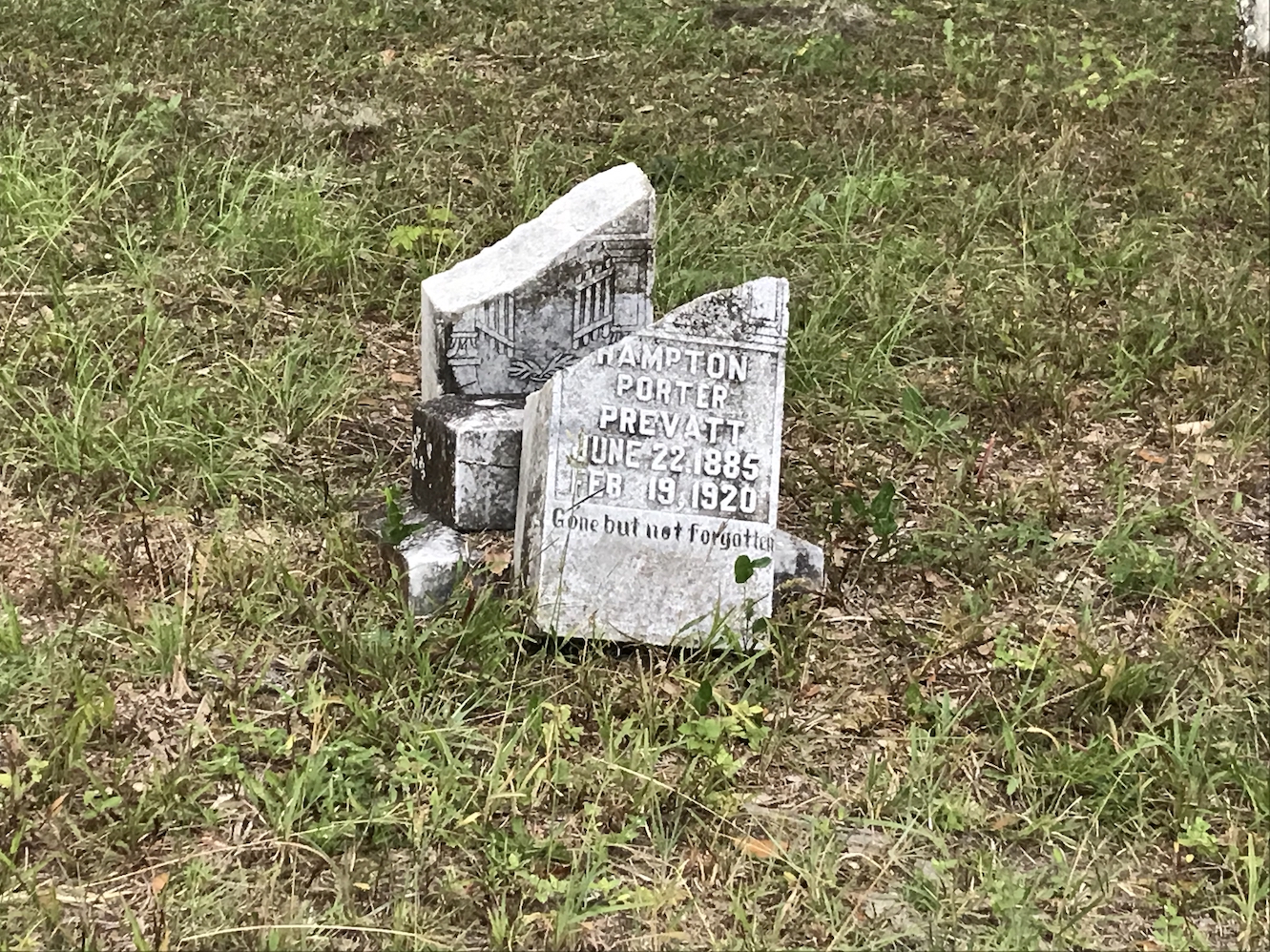 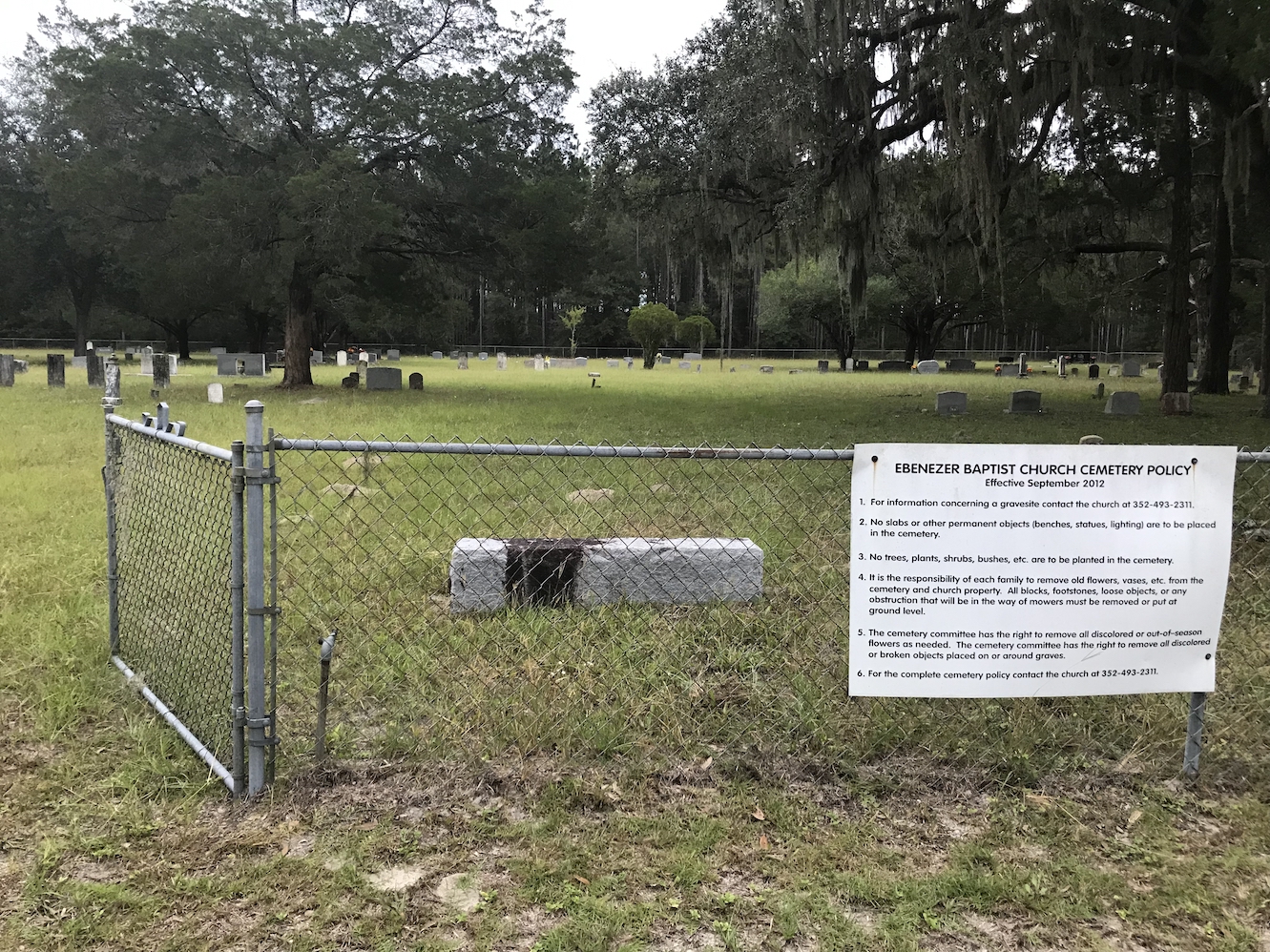 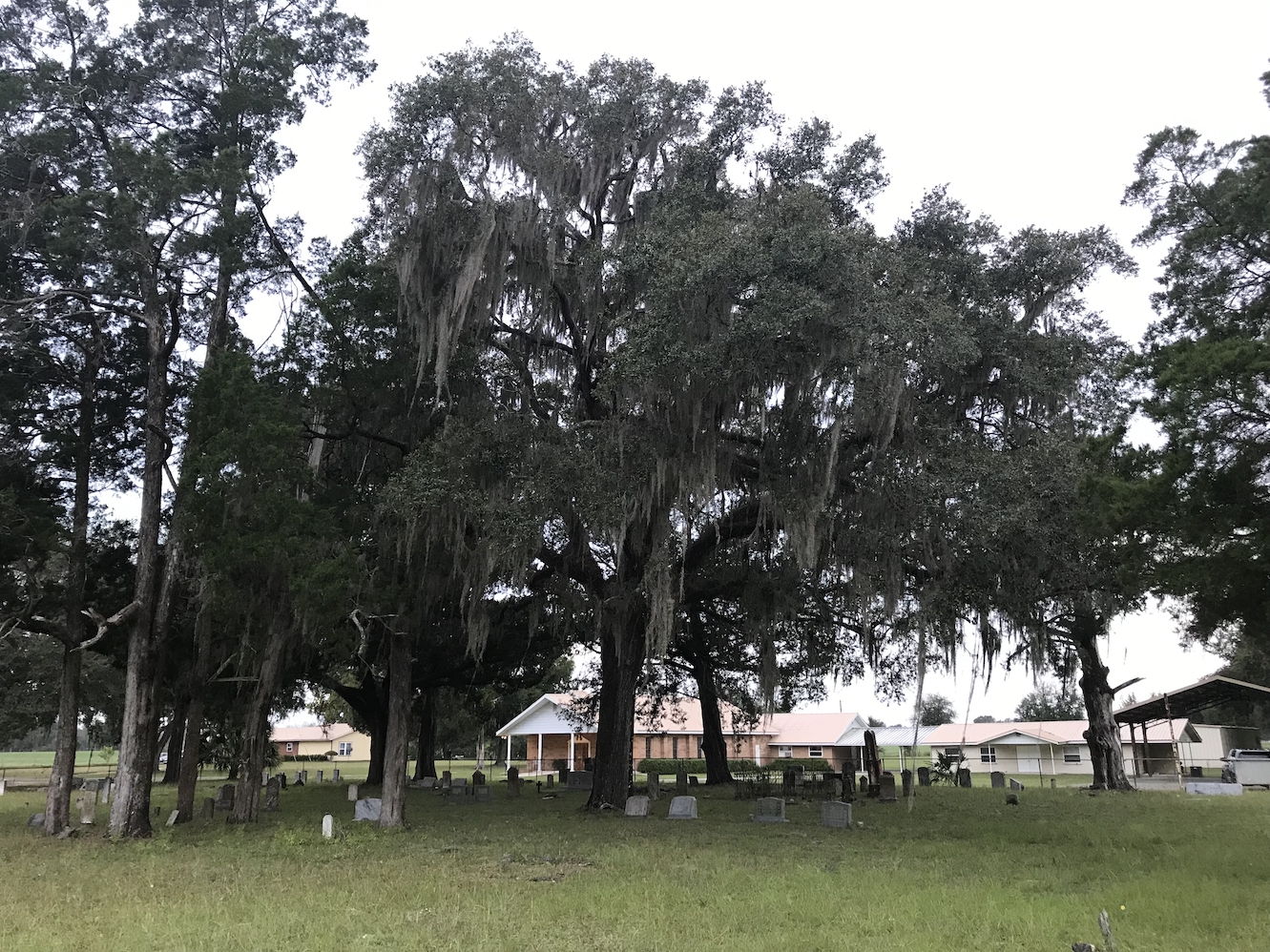 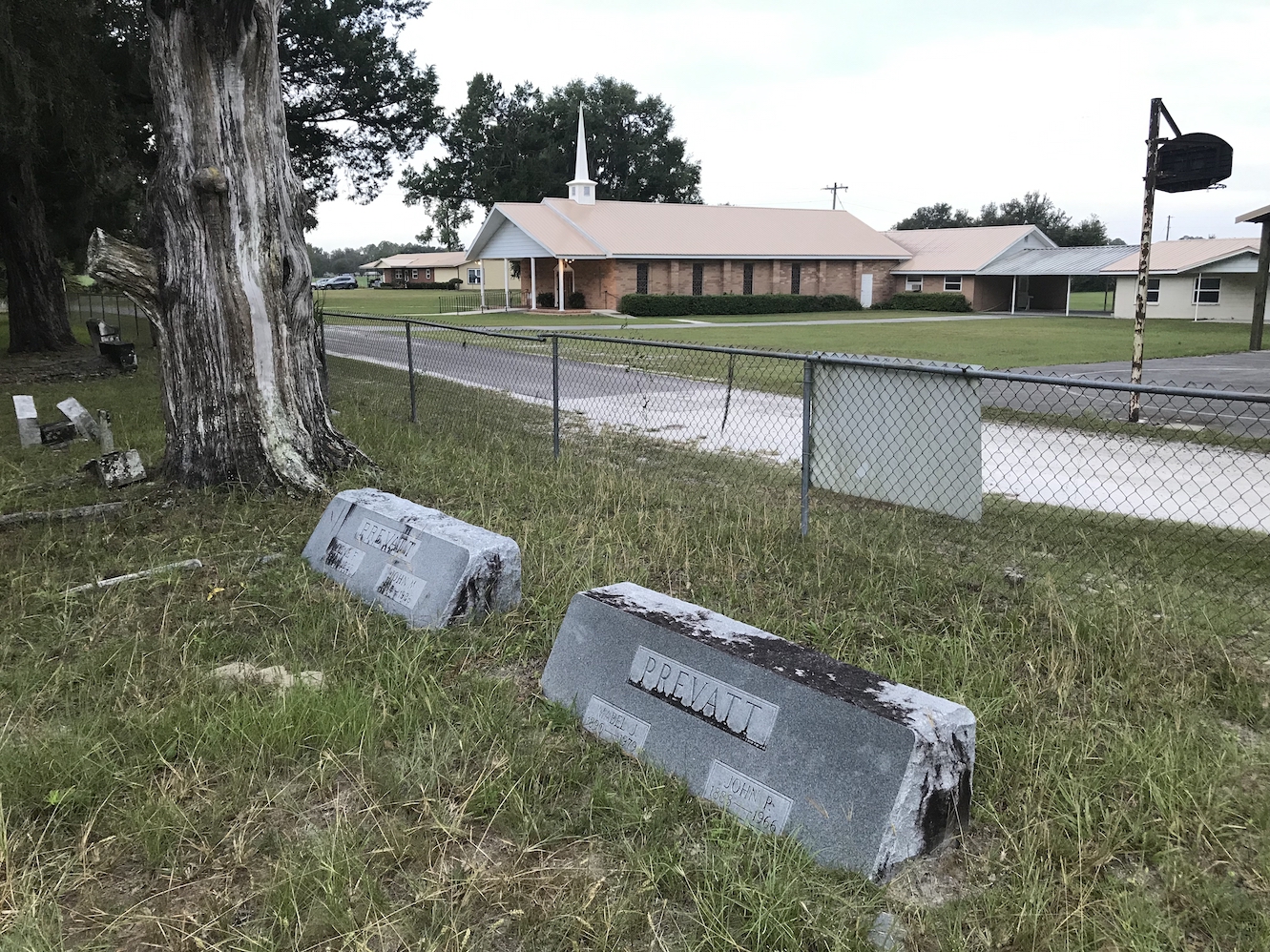 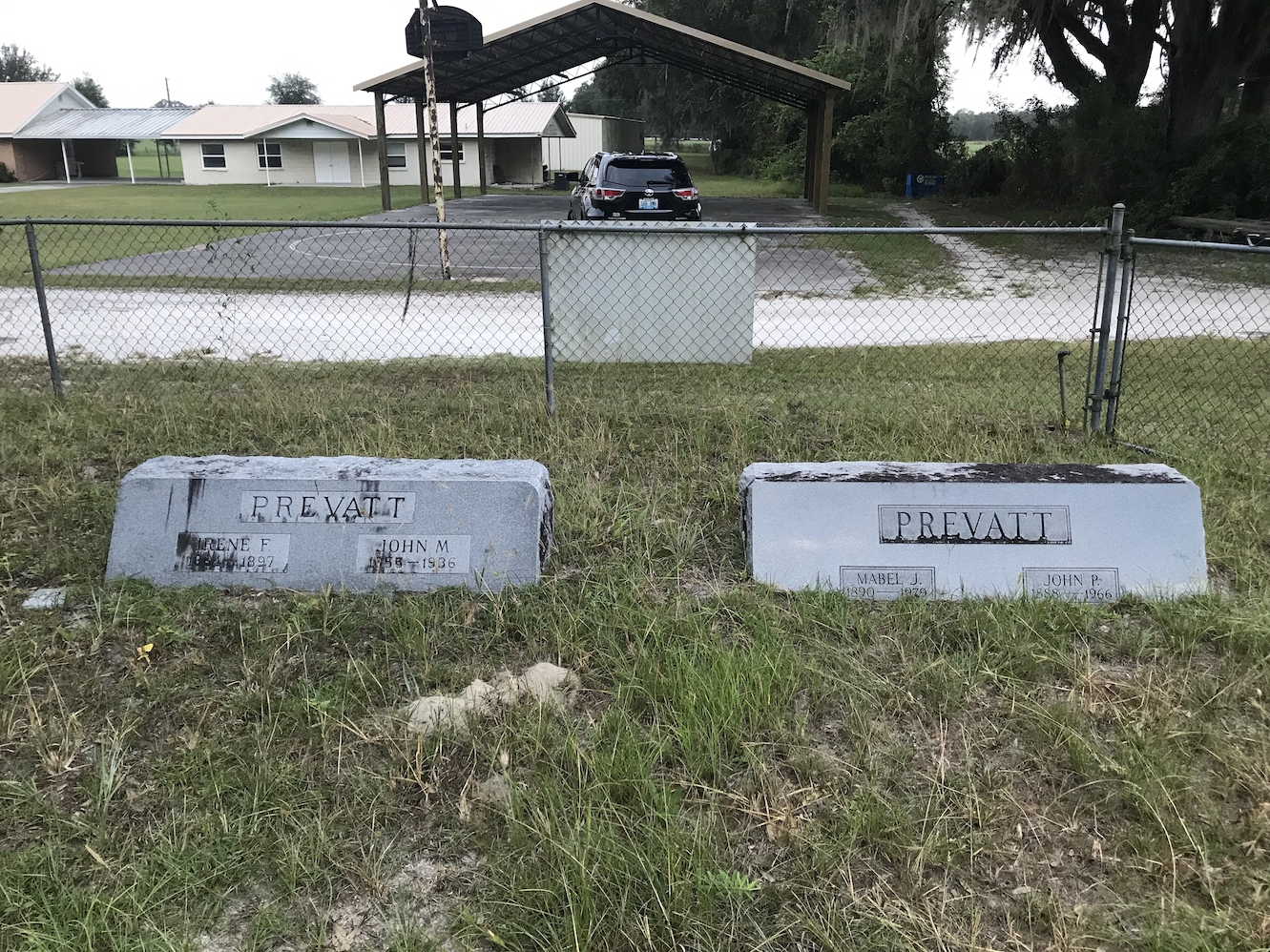 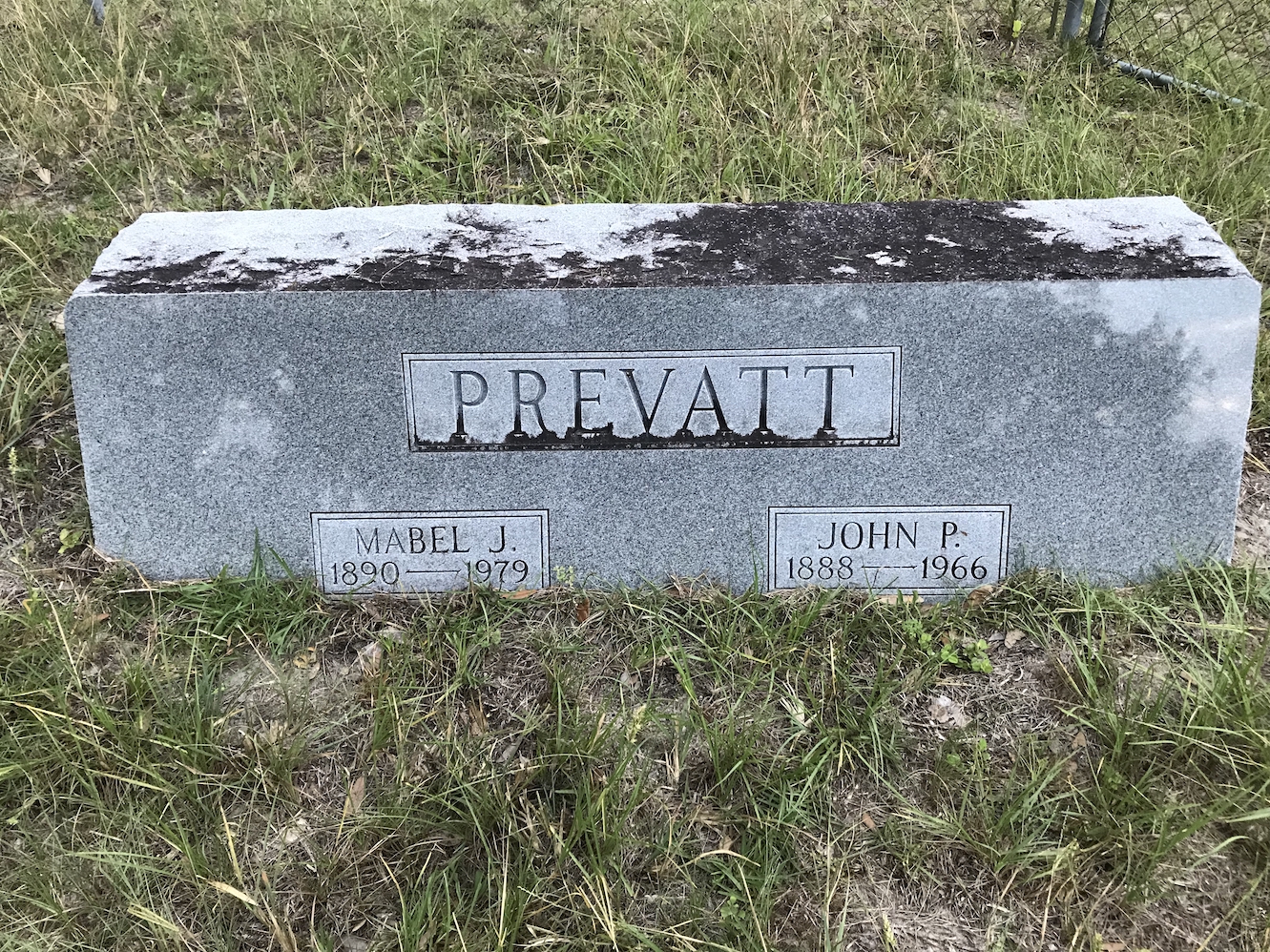