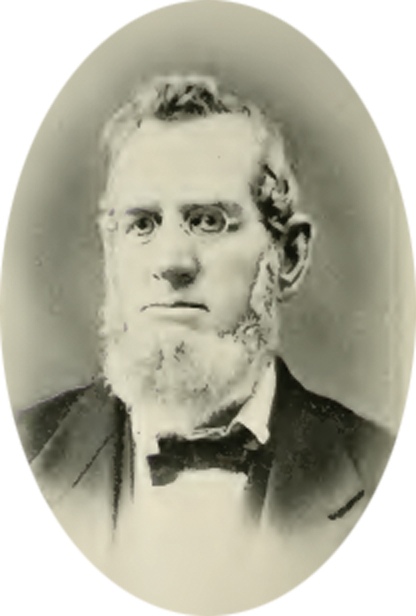 Biographical Sketches On The Life Of John Darst

JOHN DARST. Mr. Darst was elected a trustee of the school about the year 1855. He removed from near Dayton, Ohio, and located near the Academy in the year 1851. From the first he was a devoted friend of the institution. Being a man of great energy and of eminent financial ability, he was placed upon the Executive Committee and kept in that position continuously for more than forty years. Without exaggeration it may truthfully be affirmed, that, financially, he has been the leading promoter of the college. While Elder B. Major must ever be regarded as the Founder of the school, Elder John Darst has been, pre-eminently, its great supporter, having on more than one occasion rescued it from impending destruction, when other friends regarded its condition desperate. He was made President of the Board of Trustees at the death of Elder Ewing, in 1873, and still occupies that position.

JOHN DARST. - John Darst was born November 6, 1816, in Greene county, Ohio. Both of his grandfathers came from Germany. His boyhood and youth were characteristic of that early pioneer life. He learned to read and write, went as far into practical arithmetic as his teacher's limited knowledge would take him, and barely tasted grammar. Ruhamah Moler became his wife, November 22, 1838. She shared the hardships of those early times, assisted heartily in carrying out the plans to better the condition of their family, and has cooperated fully in all his efforts for the church and college. The support of a devoted wife, man's greatest earthly stay, he has never lacked. She is now the quiet, home-keeping, home-loving companion of his old age. Their golden wedding, Nov- Miiber 22, 1888, brought to their home forty three children and grand-children. Three others could not be present. In the company were nine sons (one, John W., having died at 18) and their only daughter. Their children honor them while living and will revere their memory after they shall have passed on to the other shore.

For thirteen years Mr. Darst continued his farm life in Ohio. He attempted to raise the standard of education at his birthplace in the interest of his children. For them he wished to secure a better education than he had received. The old ideas were too firmly established, however, to be uprooted. About this time he learned that the newer west offered special inducements to the farmer. Influenced by the hope of obtaining better educational and material advantages, lie removed his family to Eureka, Illinois, September, 1851. For more than thirty years he continued to farm extensively and successfully at this place. He was also interested in milling for some years. In 1882 he became president of the Farmers' Bank, which had just been organized. In business his career has been long, prosperous and honorable.

He has always taken an active part in the advancement of the community in which he resided. In 1856 he laid out the town of Eureka. His fellow citizens have shown their appreciation of his public spirit by calling him frequently to serve their interests in local offices. While a young man he recognized the evils of the drink habit. Ever since he has been its foe, and is now a party prohibitionist. During our National struggle he was an abolitionist and had five sons in the Union army. His political action is governed by the sole consideraation of right. He allies himself with those who stand for moral issues and breaks all party ties which interfere with this most worthy exercise of Christian citizenship.

In early life Mr. Darst became a Baptist, but soon united with the Disciples of Christ, among whom he has held official positions to his credit and to their advantage for nearly half a century. He first served the church as deacon, but for many years he has been an elder, and faithful to the spiritual welfare of the congregation..

On arriving at Walnut Grove, now Eureka, he found that kindred spirits had already established an academy. He identified himself at once with the enterprise. Eureka College was chartered in 1855, and at the first business meeting he was elected a trustee. He acted in that capacity until 1873, when he was elected president of the Board of Trustees on the death of Mr. Ewing. This office he has since filled continuously. He has had a leading part in the erection of the college buildings, which the prosperity of the college made needfnl. To superintend their construction he has taken the time from his private business. For many years he always looked after the gratuitous work necessary in caring for the college property. His interest, his energy and good business judgment have naturally given him a prominent place in the management of college affairs. It is a pleasure to add that other members of the Board of Trustees show a willingness to relieve him of labors which are too onerous for the growing infirmities of age.

Mr. Darst has made it the rule of his life to put a large share of his earnings into the college funds. He prefers to see his money do good while he lives. All who know the facts must freely acknowledge that without his co-operation and financial support the college work would have been most seriously crippled. Brief mention of some of his characteristic acts may provoke others to more liberally support a worthy cause. It is also proper, too, that the facts be recorded before they are forgotten, that he may receive honor while he lives. Lovers of Christian education can also better ap preciate how much their cause is indebted to this faithful friend. When the college was young, it was difficult to secure money for buildings, without which the work could not go on. Plans were made for the recitation building and pledges obtained to meet the expense. Financial distress became so great that many subscribers could not pay their pledges. Mr. Darst and William Davenport gave their note for the college debt, and mortgaged their property to secure its payment. Depression in money matters continued and the note fell due. A new note had to be given. For good reasons Mr. Davenport asked to be released from taking up the burden anew. Mr. Darst then bought more land that he might properly secure a new note,and mortgaged all he had, even the home of his family, to assume alone the payment of the entire college debt. As an illustration of his faith in God and his love of the cause, his conduct on this occasion will serve. He went to the harvest field and told his sons what he had done, and added: "If we can save this crop and have another good one next year, we will be able, I think, to save our home." One dollar was harder to get then than five are now. His first donation to educational interests in Eureka was $250, in 1852. His largest at any one time has been $6,000. His larger contributions aggregate not less than $25,000. Besides these he always responds to minor calls. Recently lie has given liberally to the select library for the Biblical department, and has promised twice the amount to the general library of the college. In a recent letter he speaks of his work in the following words: "I wish now I had kept an account of what I have done, but not caring whether other men knew or not, I knew the Lord knew how much and the motive with which it was given. This I could not have done without the co-operation of my wife and children. And if I could, I would not take one dollar of it back." No additional words could emphasize the faithful consecration of this man and his family to the interests of Eureka college. Disciples of Illinois, Mr. Darst's sons were kept from college privileges to pay off a college debt, and thus provide for your children the advantages which Eureka College affords. Will not this persuade you of your abundance to give liberally to endow a work which is so full of promise, if well equipped.

Finally, it remains to speak of Mr. Darst's interest in young men preparing for the ministry. Their work and worth lie nearest his heart. Often he gave them board, furnished them horses to carry them to their appointments, loaned them money, attended regularly their devotional meetings until age prevented his going, and talked to them plainly about their life and work. He wished them to have a proper conception of the ministry of the Gospel. There are many who have reason to remember his wise counsel, and some for personal reasons, too, recall with gratitude the Scripture, "Faithful are the wounds of a friend." Of his helpfulness the following is a good example; B. B. Tyler, of New York, early in the sixties devoted part of his time to business, to obtain a support for his family. His Sunday services were full of promise. Seeing this Mr. Darst "persuaded him to relinquish his business engagements and devote his energies to the saving of souls, stipulating to supply all necessary funds to support him in the work." Of this offer Mr. Tyler says: "I want the world to know that John Darst did this for me and for the Church of Christ. If I have been worth anything to the world, let this grand, good man, still living, have the honor that belongs to him."

Such, in mere outline, is the life of this plain, earnest, self-sacrificing, unassuming Christian man. The world is always better because of such lives.

Location Of The Grave Of John Darst

John Darst was born November 6, 1816 and died August 6th, 1895, at the age of seventy-nine. He became a member of the Board of Trustees of Eureka College, and served as its president upon the death of Albert G. Ewing. He held this post until his death in 1895. He and his wife Ruhamah are buried in the Olio Township Cemetery, also known as Eureka Cemetery in Eureka, Illinois. The city is located just east of Peoria on Hwy. 24. In the town center turn right on Hwy. 117. and go past Eureka College, and you will see the cemetery on the left. This cemetery was at one time the old Eureka Christian Church Cemetery. The building has long been gone. Enter into the main entrance of the cemetery and go to the second left. Head up the hill toward the north entrance. Just before the gate, look to your right for the larger marker next to the road, DARST. 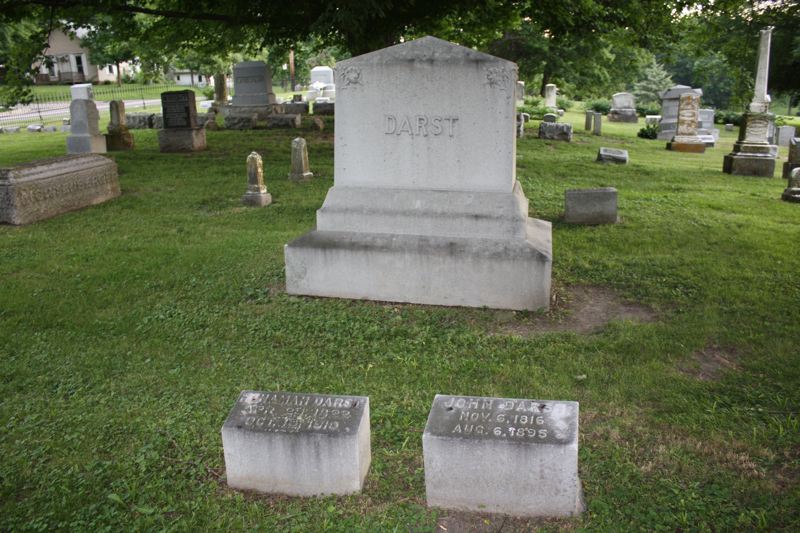 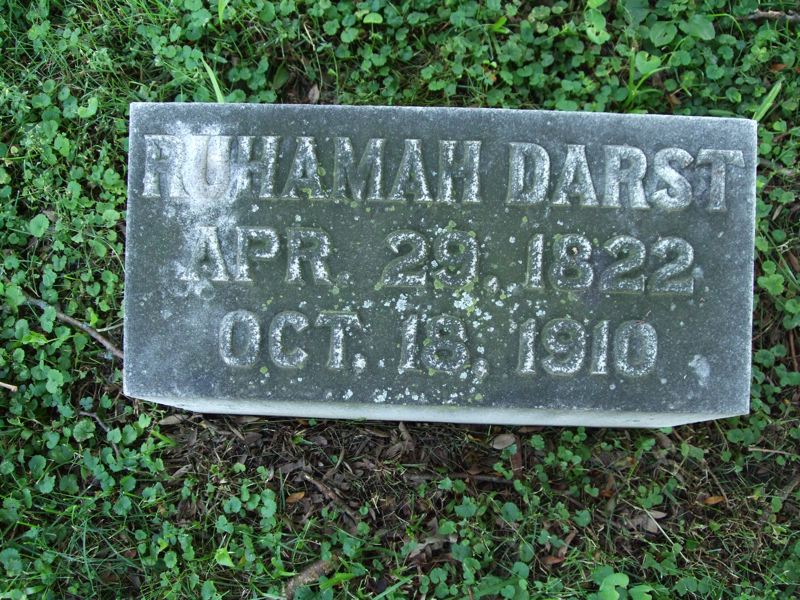 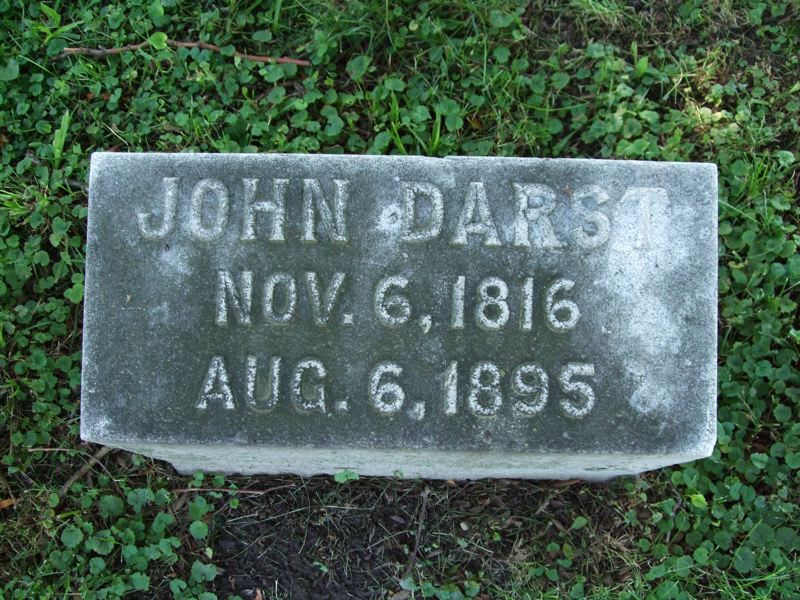