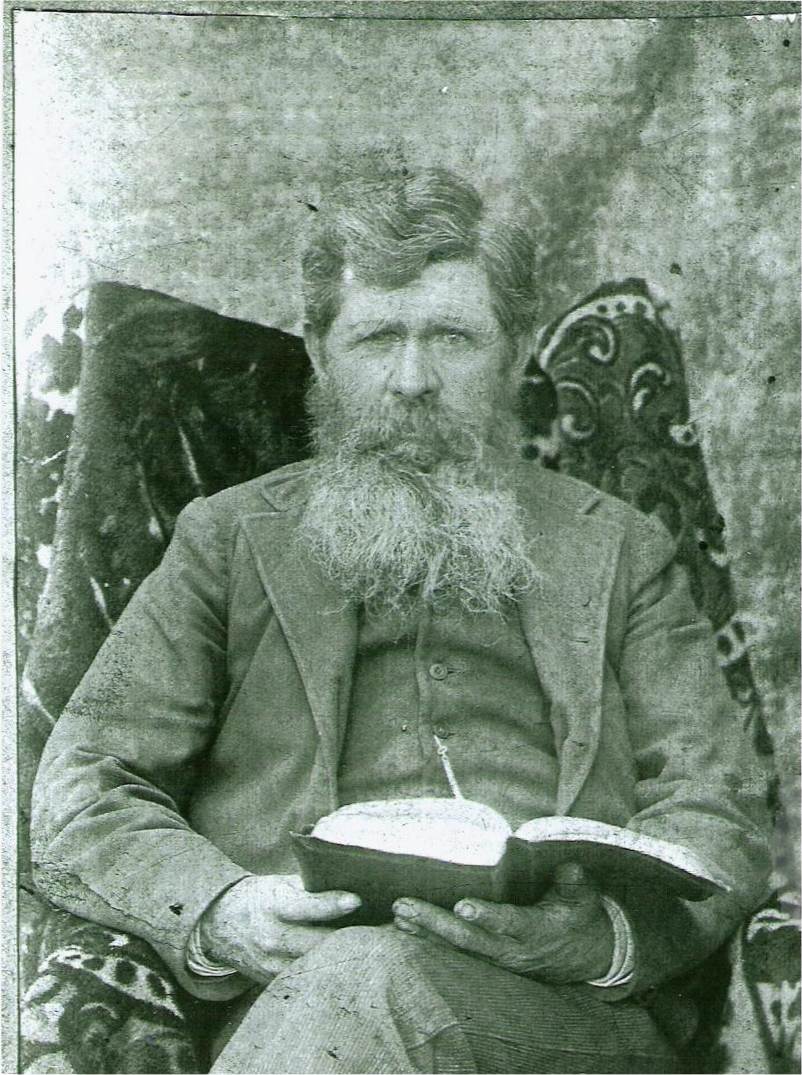 Elder Joseph Bailey, of Paruna, Okla., died in the hospital in Wichita last Friday. His health had been failing for the past few years and a few days ago he was taken to Wichita where he died. His death was caused by internal diseases.

He was a preacher of the Christian church and has been in active service for the past 35 years, having been the means of the conversion of over 1,500 souls.

He took sick at his home at Paruna a week or so ago and was taken to the hospital to be operated upon but the operation was not performed.

At the time of his death he was 72 years old. His third wife and 16 children survive him. One son, Dr. H. T. Bailey, of Courtland, Arizona, Mrs. Joseph Bailey and two other sons were present at the funeral.

The corpse came in on the train Saturday and was held over till Sunday afternoon. The funeral was held Sunday afternoon, at the Methodist church, Rev. Tanksley of the Christian church officiating. Interment was made in the Protection cemetery.

We desire to thank our friends and neighbors for their kindness and heartfelt sympathy rendered us during the illness and death of our beloved husband and father, Joseph Bailey of Paruna, Okla. Mrs. Joseph Bailey and children, and Dr. H. T. Bailey.

Biography on the life of Joseph S. Bailey

At the age of sixteen he met and married Jane Ray Harlan. This marriage resulted in the birth of a son, J. Rice Bailey. This marriage dissolved before December 1870 when he married Eleanor Thompson, my great grandmother. Eleanor Thompson and Joseph (Josephous) Bailey were married by John Newton Mulkey on December 12, 1870 in Clay County Tennessee. Reverend Mulkey was one of the early leaders of the Christian Church in Monroe County Kentucky area. It is believed Joseph began his devotion to preaching the message of the Christian Church around 1866.

By 1875, Josephous and Eleanor moved to Elk Creek, Texas County, Missouri where he continued his circuit riding ministry, often riding on a mule. The Baileys raised six children among whom my granddad, Dr. Jacob N. Bailey, was the next to oldest. Their farm included 120 acres for which Josephous paid one dollar and twenty five cents an acre. He entered into a contract with the Stark Brothers Tree Company in 1892 for 1,000 apple trees. On Sept. 18, 1889, Eleanor died and is buried in the Price Cemetery in Elk Creek. Missouri.

On April 15, 1890 he married a third time to Rosa Belle Shipman and they raised seven children from this marriage. The Baileys remained in Elk Creek Missouri thru April 1910 as they are listed on the federal census. Sometime after that date they moved to Paruna, Oklahoma where he continued his preaching of the message of the Christian Church.

On June 19, 1913 Joseph S. Bailey died in a Wichita, Kansas, hospital and his obituary appeared in The Protection Post on June 26, 1913. Today his obituary is posted on the Comanche County Kansas web site under a listing of those interned in the Protection Cemetery, Protection, Kansas. The obituary states that he served the Christian denomination for 35 years and brought over 1500 people to this faith. The Reverend R.H. Tanksley performed the funeral service.

His wife Rosa moved by 1920 to Tulsa where she died. In May 2006, a Bailey family reunion was held in Houston, Texas, and descendants of each of the three marriages were in attendance.

I have 26 years of Bailey family research available for anyone linking to Reverend J.S. Bailey.

Directions To The Grave Of Joseph S. Bailey

Joseph S. Bailey is buried in the Protection Cemetery, Protection, Southwest Kansas. Protection is located, about 75 miles southwest of Wichita, between Coldwater and Ashland, Kansas. Out of Coldwater head south on Hwy 183. The highway will turn west joining Hwy 160, then less than five miles to Protection. In town turn north on N. Jefferson Avenue and head toward the center of town. Pass Main St. on Block and turn left on West Pine St. Head to the end and the road will bear hard to the right. Cross the railroad and continue out of town until you get to the cemetery on your right. The burial plot is section G"5 17. Enter the cemetery. Immediately turn right and go to the end of the first section on your left. Take a left, and begin looking for the marker on your left. It will be the first marker on the fifth row back. The grave is on the far side of the section." The GPS location of the grave of J. S. Bailey: D.d. 37.212067,-99.494704 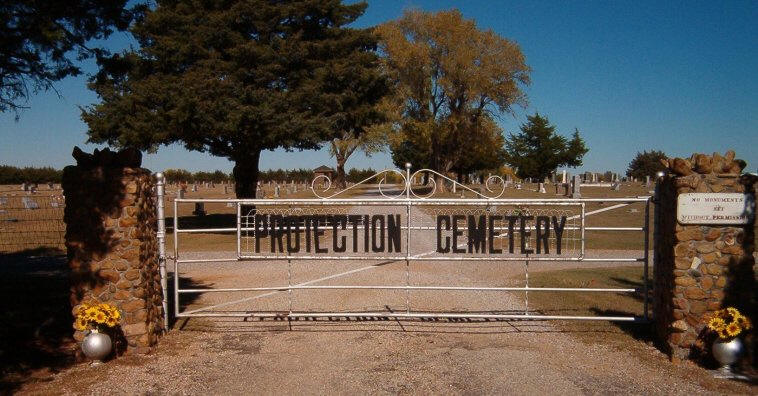 Photos Taken In February, 2012
click on photo for closeup 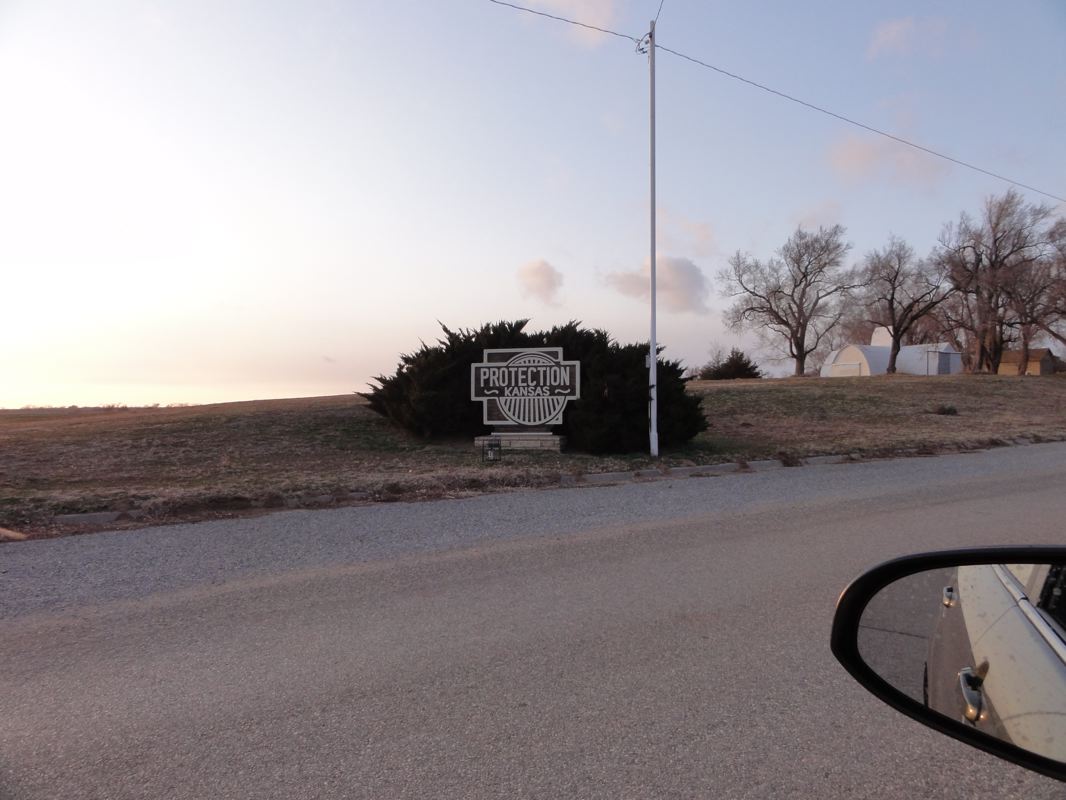 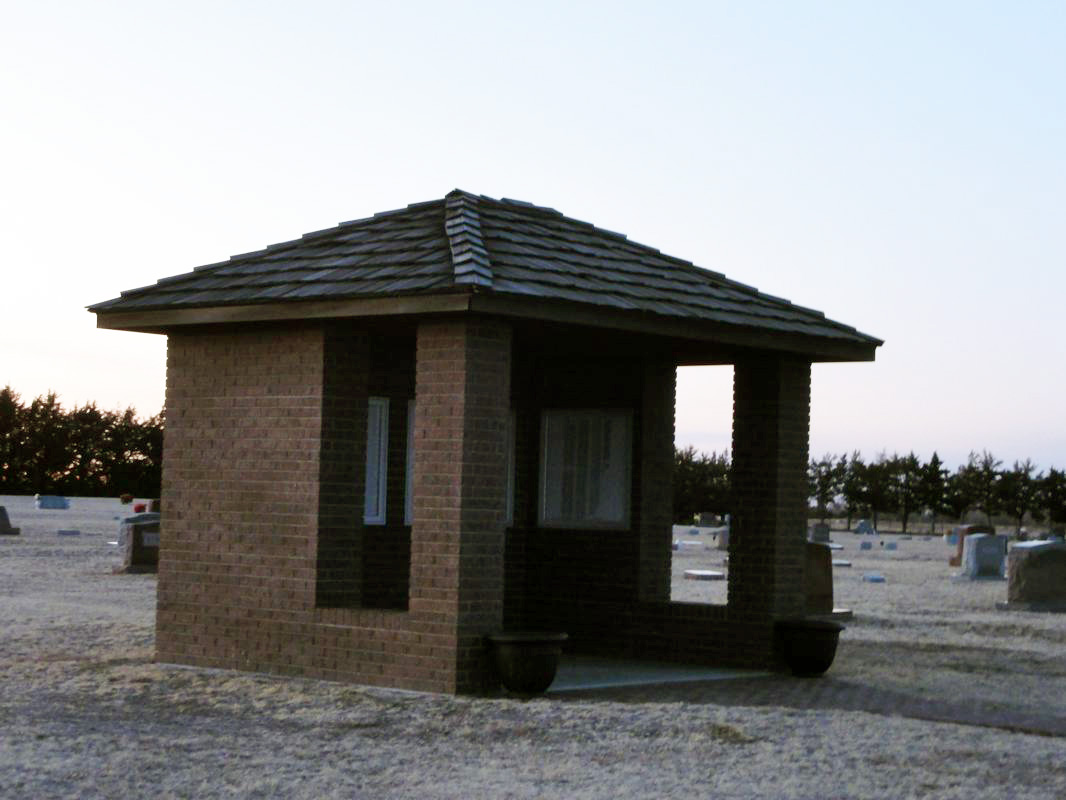 Cemetery Booth - Lists names and maps of interments in cemetery 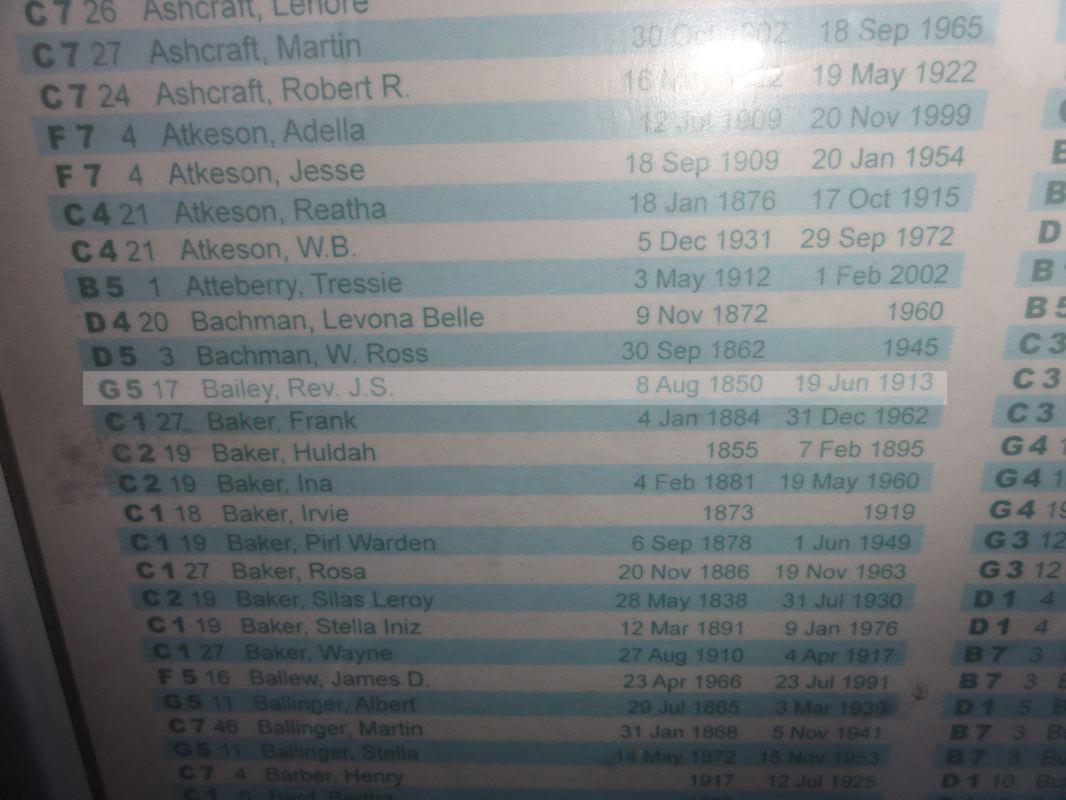 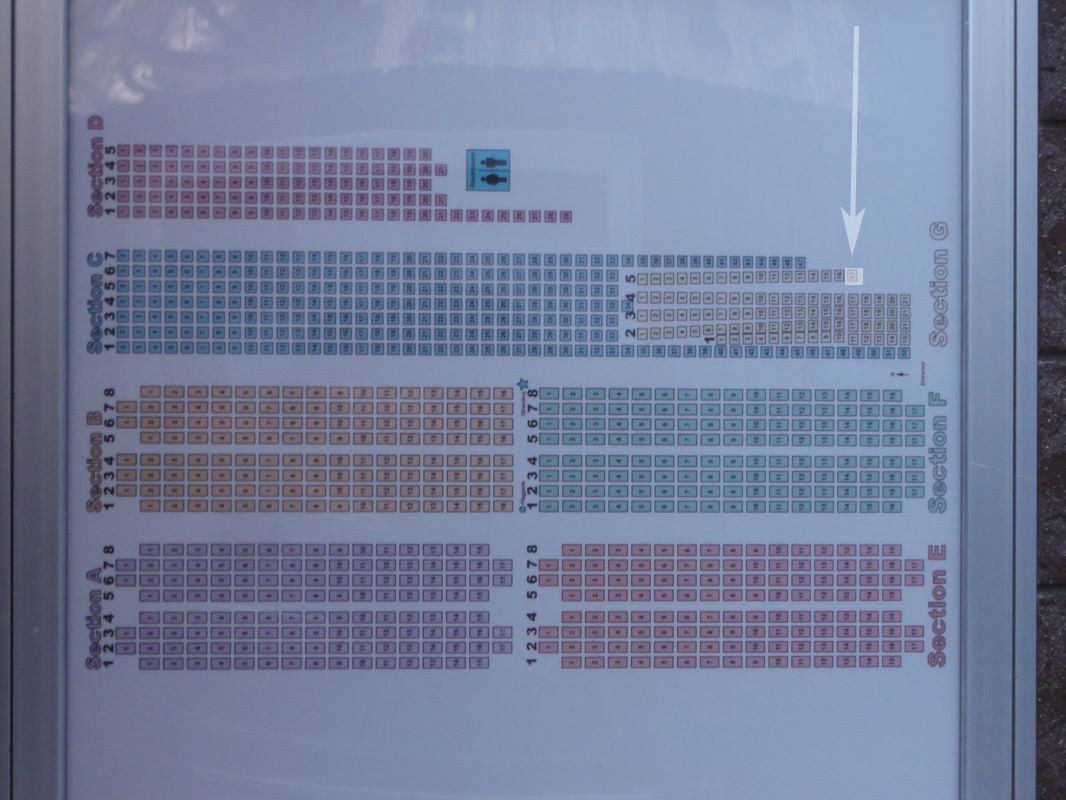 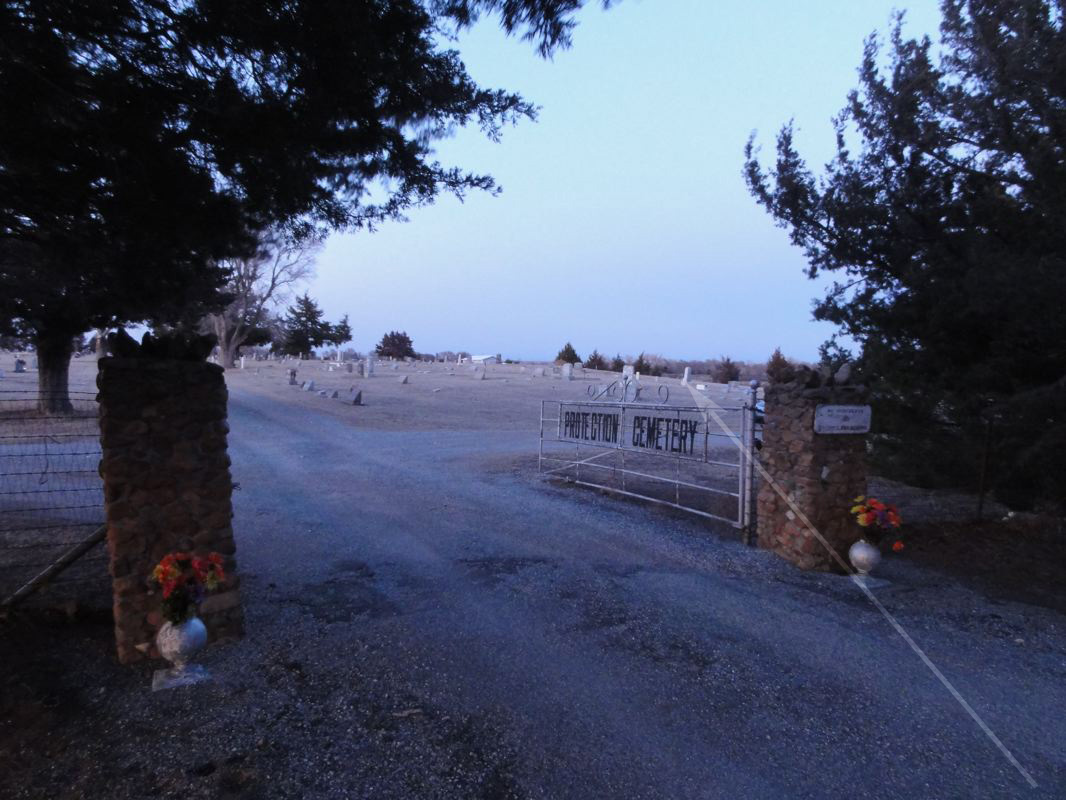 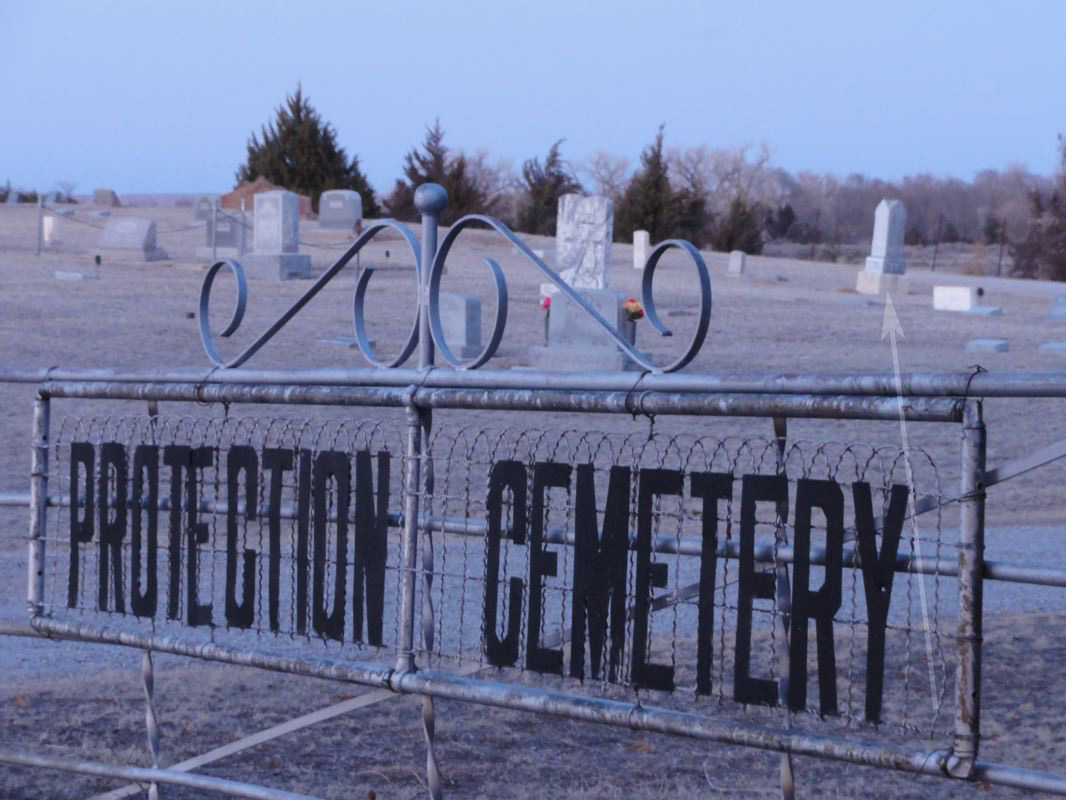 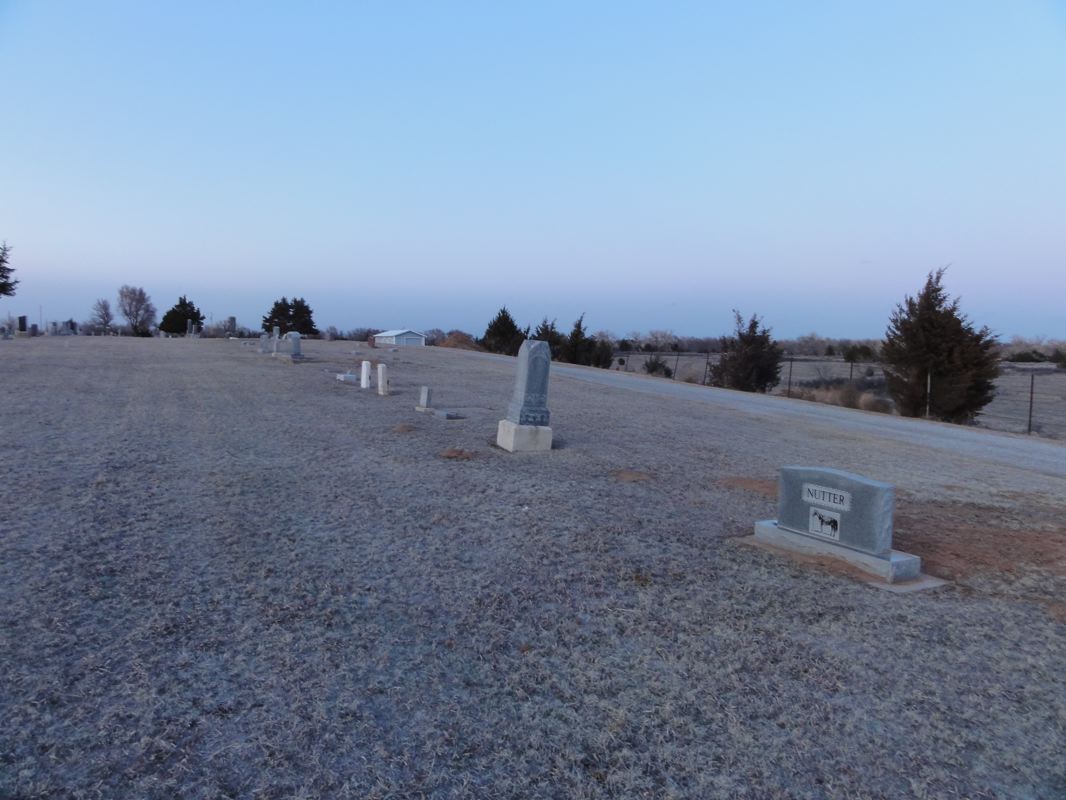 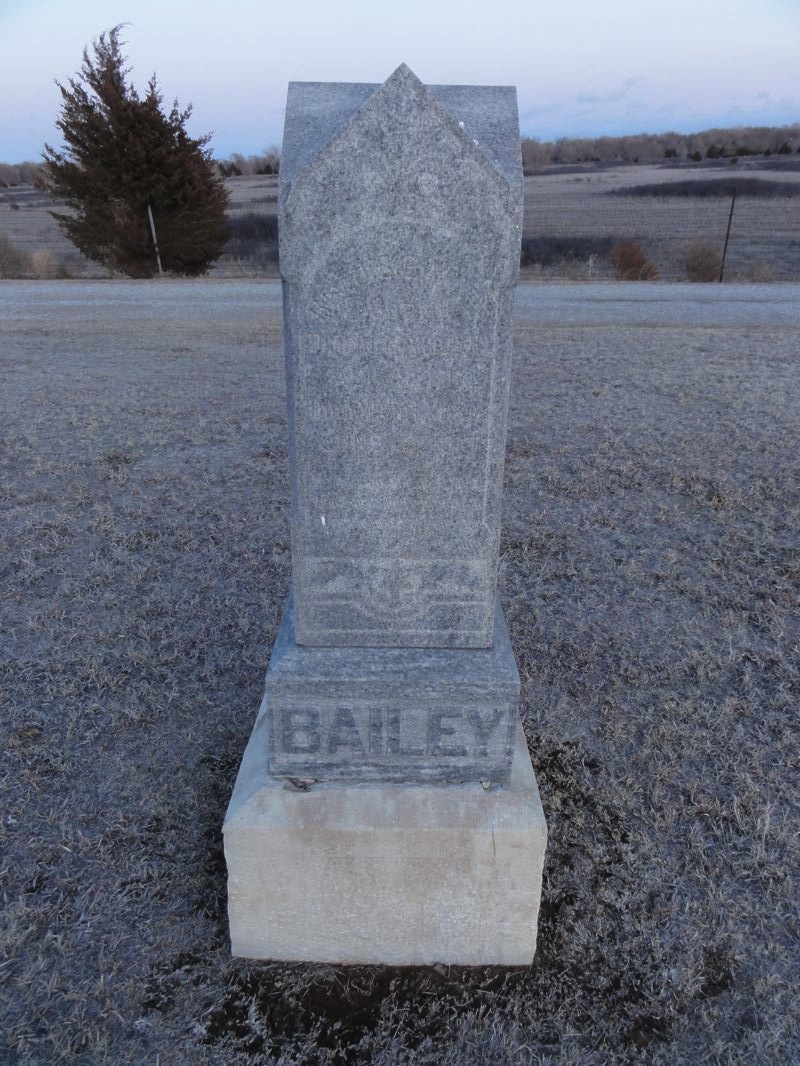 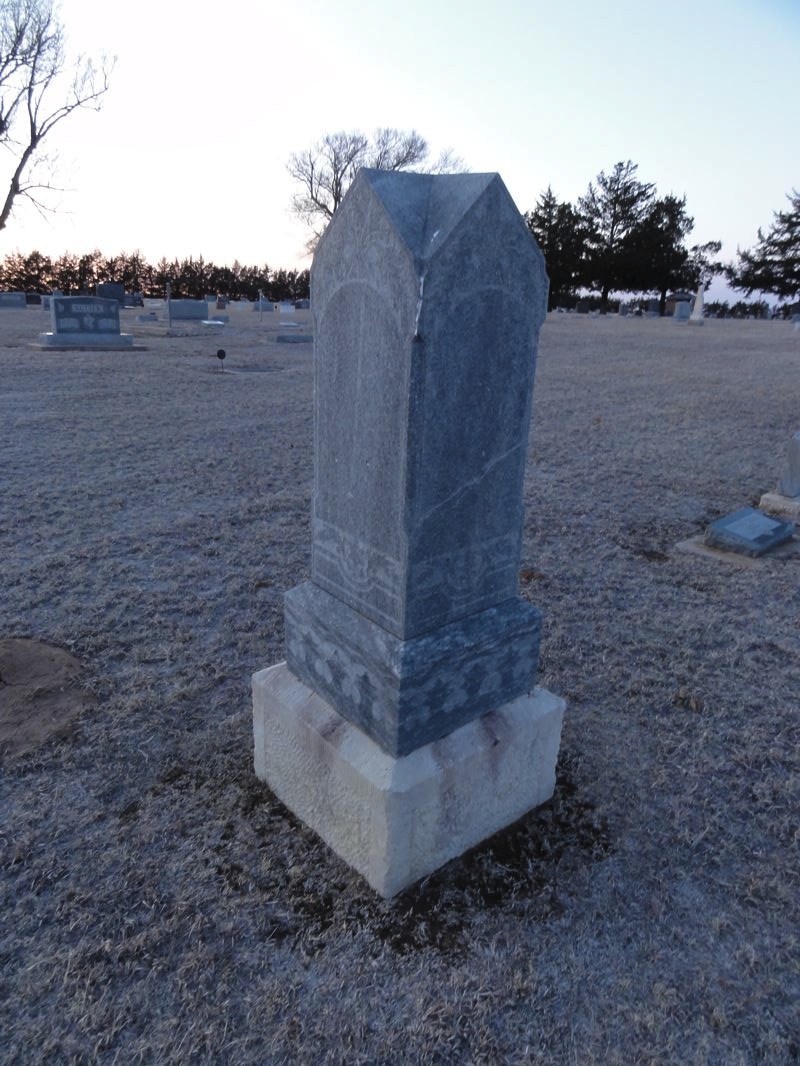 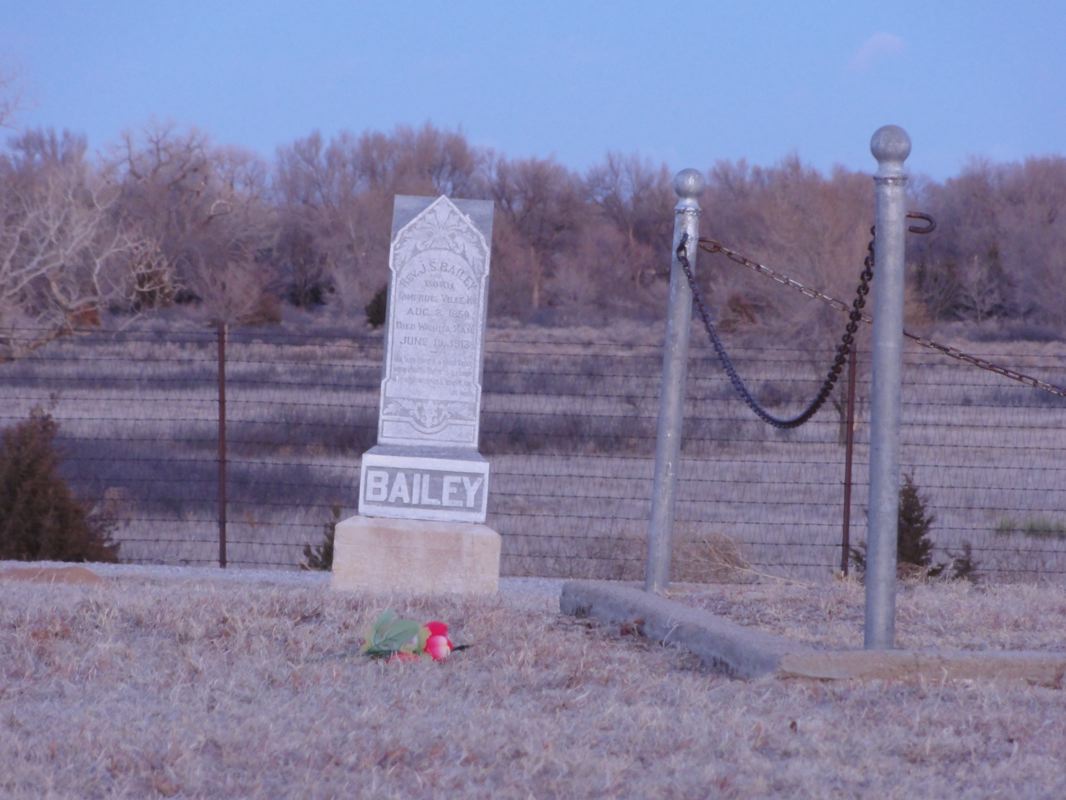 A little chalk can make a world of difference 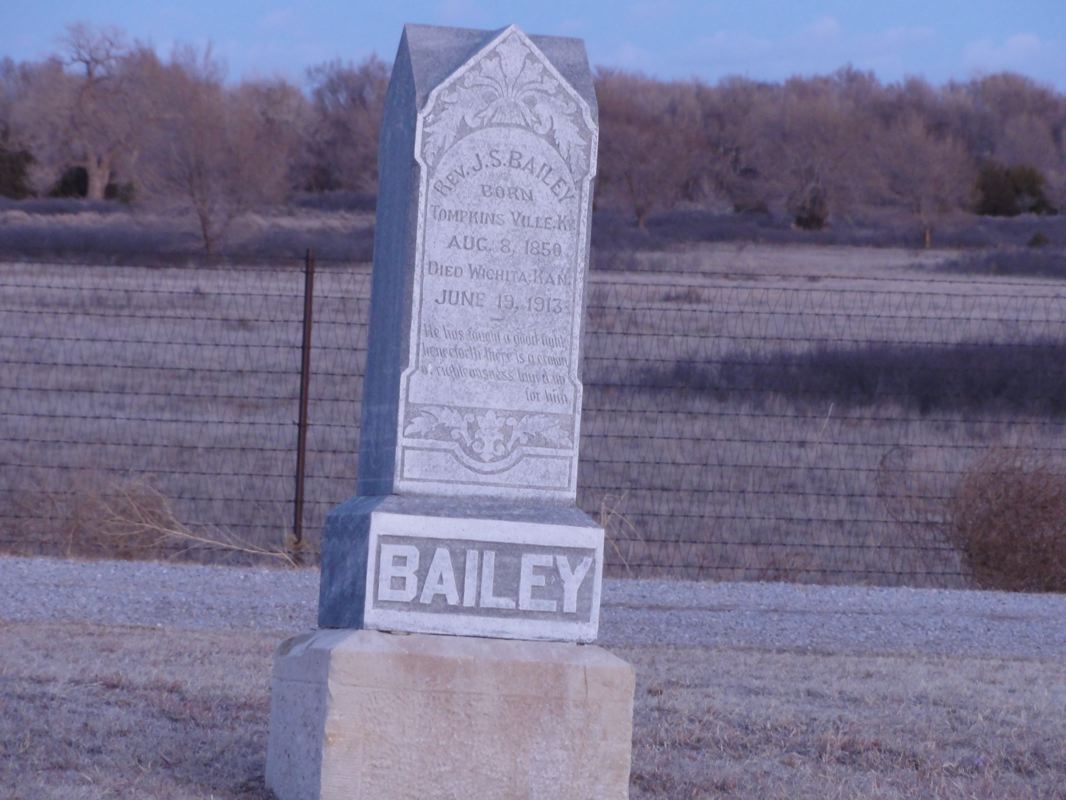 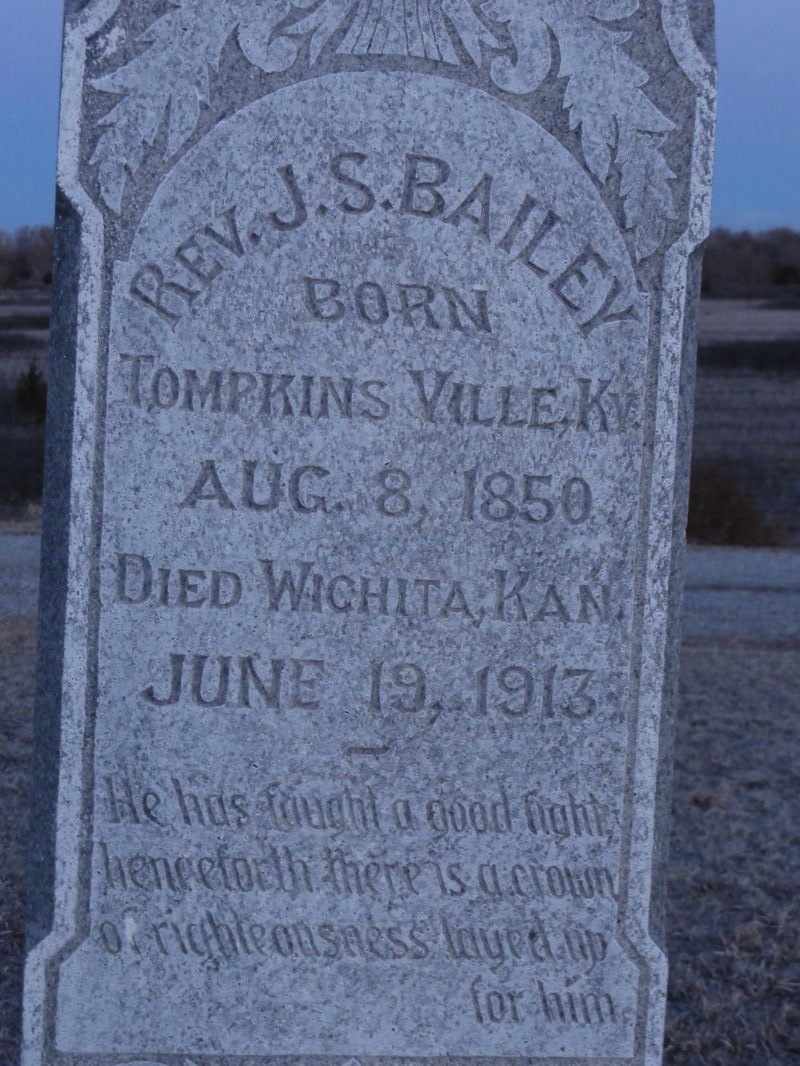 Rev. J.S. Bailey
Born
Tompkinsville, Ky
August 8, 1850
Died Wichita, Kansas
June 19, 1913
He has fought a good fight,
henceforth there is a crown
of righteousness layed up
for him.

Web editor note: In February, 2012, it was my privilege to visit the grave of Josephous Bailey. I was invited to take part in the annual Affirming The Faith Lectureship in Oklahoma City, Oklahoma. Getting into the area early, I was afforded the opportunity to put about 2000 miles on a rental car in order to locate graves of gospel preachers and church leaders of yesteryear in a wide area. My first day I was able to visit the grave of J.S. Bailey. It was late in the evening, and fortunately, the search was not difficult since the cemetery had a booth with maps and listings of all interred in the grave yard. It was a cold day, but a productive one.