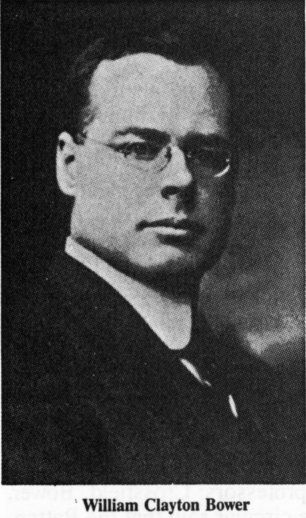 William Clayton Bower, who was to become a minister, teacher, author, churchman, and friend to many, was born at Wolcottville, Indiana, on February 6, 1878. His advanced education was received at Tri-State College, Angola, Indiana, and at Valparaiso and Columbia Universities. At Tri-State he met Ann Troas Hemry and they were married on December 22, 1900. To this union two sons were born: Phillip Graydon of Washington, D. C., and Clayton Hemry of Hong Kong.

Dr. Bower had been dedicated to the ministry before his birth. Particularly his mother desired him to be a man of God. Both parents were members of the Methodist Church and naturally Dr. Bower became a Methodist minister, delivering his first sermon when he was sixteen years old, in Green Chapel at Wolcottville. While in college, he roomed with a Baptist with whom he had many religious discussions. He felt the need of help in bolstering his position so he turned to his minister. Still not satisfied, he went to Dr. Charles S. Medbury, minister of the Christian Church in his town. He found an immediate response of warmth, friendship, and understanding. Dr. Medbury gave him no literature of the type he had expected, but instead presented him with a New Testament saying that that volume was all the literature he needed. Both knelt in prayer. The elder minister did not pray that young Bower should accept his view but rather that God might guide him. Dr. Bower relates that his mind was definitely made up to enter the Christian Church ministry when he rose from his knees. In the years that followed, he served Christian Churches at Tipton, Indiana; North Tonawanda, N. Y.; and the Wilshire Boulevard Church in Los Angeles, California.

In North Tonawanda he was closely associated with George F. Rand, a prominent banker, friend of John Wanamaker, and an ardent Sunday school advocate who, with his minister, made their church the first on record in which every member joined not only the church, but the Sunday school also. Dr. Bower feels that the dynamic influence of Air. Rand was the springboard for his interest in religious education which rapidly developed into his life's major profession.

Dr. Bower came to The College of the Bible in 1912 to the newly created Alexander Campbell Hopkins Chair of Religious Education with the directive not only to teach but also to organize the department. During this period he also served for three years as part-time director of religious education at Central Church.

In those days it was not considered necessary for a minister to be ordained. Dr. Bower had served for many years without this "setting apart," but in 1923 he was ordained in Central Church by his minister and friend, Dr. A. W. Fortune. In addition to teaching religious education in The College of the Bible, he organized the departments of education and sociology in Transylvania College. In 1921 he had become dean of The College of the Bible where he served until 1926. In that year he was called to the professorship of religious education at the University of Chicago where as chairman of the Field of Practical Christianity and on several occasions acting dean, he served for seventeen years, retiring in 1943 as professor emeritus. However, his return to Lexington was anything but a retirement. He served as part-time professor of religion at Transylvania and also part- time professor of sociology at the University of Kentucky. Here he was for a time acting chairman of the department. He led in a most significant study and in the building of the Kentucky program of moral and spiritual values. For his work in this area he received the Kentucky citation for outstanding achievements from Transylvania College on April 23, 1954.

In 1950 this versatile man took up oil painting on the basis of his educational theory of learning through creative experience. He has painted more than 200 pictures in oil, water colors, and pastels, all of which have the distinctive Bower style. He likewise designed the medallions for the stained-glass windows in the superstructure housing Old Cane Ridge Meeting House. He also drew the vignettes for his autobiography (published in 1957) and for this volume.

In addition to the Master of Arts degree received from Columbia University in 1910 and enough subsequent credits in sociology and education to qualify for the doctoral degree in each, he received the honorary degrees of Doctor of Laws from Transylvania College in 1935 and Doctor of Divinity from Meadville Theological Seminary in 1943.

Writing has been a great love of Dr. Bower. Sixteen books, the present volume being the seventh written after his retirement, bear his signature. Perhaps the most significant volumes are The Curriculum of Religious Education, Character Through Creative Experience, Religion and the Good Life, Church and State in Education, Moral and Spiritual Values in Education, and The Living Bible.

Little wonder is it that his name appears in Who's Who in America, Who's Who in the Clergy, Leaders in Education, The Directory of American Scholars and American Men of Science (Behavioral).

Central Christian Church will ever be indebted to Dr. Bower for this discerning account of the events which make up its history. 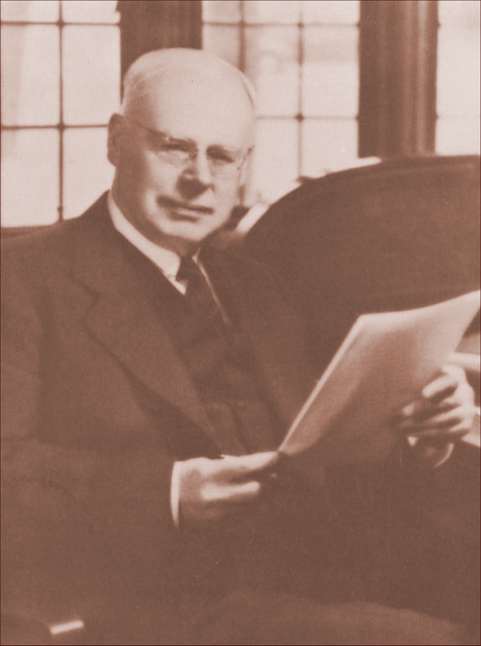 Lexington Cemetery is one of the most beautiful old cemeteries in America. It is located on West Main Street heading away from downtown Lexington toward Leestown Pike. Turn right into the main entrance past the office. Stay on Main Avenue passing Henry Clay Monument on the left. Go until you pass section "K" then Section "J" will be the next section. About halfway just before you see a wedged shaped section "R," stop the car and go back a few rows in "J." Bower is just next to A.W. Fortune. (See Map Below)