FEATURE WRITER FOR THE WORLD EVANGELIST

After his retirement from being president of Morehead State University in Morehead, KY at the end of 1976, Dr. Doran began writing for The World Evangelist and continued this until a few months before he went to be with his Lord and Master. He was an ardent supporter of this journal and greatly encouraged me. He was very active in promoting this paper's circulation wherever he preached.

Most of Adron's writings for The World Evangelist were on Restoration Church History. He frequently thanked me for asking him to write for this journal and he told me it was a great blessing to him to have this work to do in his retirement years. It was work, indeed! He was a research artist! I assigned him some subjects on which to write in Restoration Church History, but he selected many subjects. He researched some areas on this subject on which others had not written, and he did a great job.

In 1953 when Dr. Doran became president of Morehead State College about 700 students were enrolled there. During his presidency the college became Morehead State University. When he retired at the end of 1976 the university had about 7500 students, and many new buildings.

Dr. Doran and Dr. J. E. Choate wrote a book entitled: The Christian Scholar - A Biography Of Hall Laurie Calhoun. Brother Doran wrote a book of sermons on Restoration Church History. I told brother Doran one reason his articles and stories were so well liked was because he wrote as though he was talking to people.

Brother Doran was born September 1, 1901 on the Kentucky-Tennessee state line in Boydsville about 20 miles from where I was born December 3, 1925 near Greenfield, TN. We both followed mules pulling plows in similar soil!

Dr. Doran graduated from Cuba High School in Graves County, KY in 1928. He was a student at Freed-Hardeman College in Henderson, TN 1928 to 1930. He earned B.S. and M.A. degrees at Murray State University in Murray, KY 1932 and 1948. He received his Doctor of Education degree from the University of Kentucky in 1950. He received Honorary Doctor of Laws degrees from five or six colleges and universities. In 1971 he received the Horatio Alger Award from the Association of American Schools and Colleges at ceremonies in Waldorf-Astoria Hotel in New York City. At that time only 200 had received that Award, including President Eisenhower and Bob Hope.

Brother Doran served on the Board of Directors of International Bible College, which is now Heritage Christian University, and he was a special Advisor for Dr. Charles Coil who was then the president of the school. Dr. Doran also served many years on the Board of Directors of Freed-Hardeman University. He received many other awards and served in many other positions too numerous to mention here.

Adron and Mignon Louise McClain were married August 23, 1931. They celebrated their 70th Wedding Anniversary August 23, 2001. Mignon stood by her man in a signal manner! She was a great supporter of him in his preaching work and his other endeavors. She served as president of the Kentucky Federation of Women's Clubs. She was founder and long time director of the Personal Development Institute at Morehead State University. I fondly remember when she showed me through the facilities and features of this good work and program which was a great blessing to many MSU students. It was my privilege and honor to receive a Doctor's degree at MSU when she received her Doctorate there at graduation ceremonies in 1976.

In his early manhood Adron became a Christian by accepting the Savior and being baptized into Christ for the remission of sins. (Romans 6:3,4; Galatians 3:27; Acts 2:38.) He started preaching when he was a young man. I heard him many times. He was a very good speaker. He caused his auditors to see with their ears! That is why he has often been called an orator.

Over 50 years ago I preached for brother Doran one time. He was preaching in a revival in Greenfield, TN and there were afternoon and evening services. He had to be away one afternoon and I preached in his place. When - I offered the invitation of our Savior, Dale Overton and Charles Cantrell responded and I baptized them into Christ. 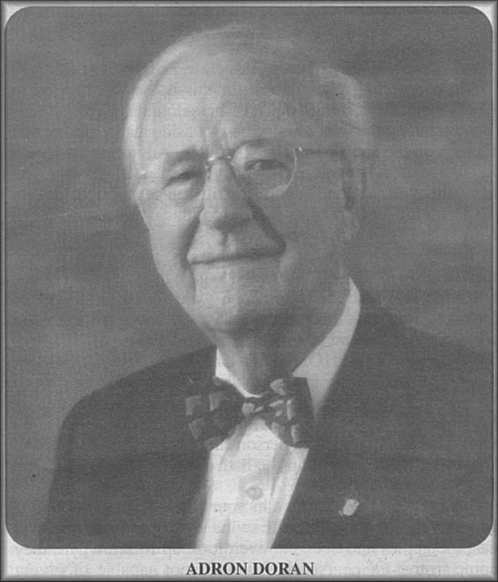 In Ecclesiastes, Solomon taught that every accomplishment and every honor and all earthly blessings are "vanity and vexation of spirit" if one does not have God his Creator. He wrote, "Let us hear the conclusion of the whole matter: fear God and keep his commandments, for this is the whole duty of man." (12:13.) There is no Hebrew word in the original text of this passage for the word "duty." The translators put "duty" in thinking it would help to convey the message more completely in English, but it is not really needed. In the context of Ecclesiastes the obvious meaning is that having a sense of God's awesomeness and doing what he says for us to do is what it means to be a true and full man in God's sight! Adron Doran lived by this principle, and I am very glad he did! On Thanksgiving Day he went to be with his God and Father whose love and whose awesomeness motivated him to live according to God's will throughout his life.

Early in their time in Morehead Adron and Mignon took the initiative to get the Morehead Church of Christ started. Brother Doran helped greatly in getting brethren in many places to help with the cost of the meetinghouse.

Brother Doran's funeral was conducted at Kerr Funeral Home, across the street from where he lived in Lexington, KY, on Sunday November 25, 2001 beginning at 2:00 p.m. Northcutt Funeral Home in Morehead, KY was in charge. Steve Johnson, George Rogers, Charles Moore, Don Flatt and I spoke at the funeral. Graveside services were conducted in Highland Cemetery in Mayfield, KY on Monday, November 26 by Mike Brumley, Harvey Elder, and I.

Despite her joy of gospel hope, Mignon naturally greatly mourns her beloved's passing. Messages can be sent to her at this address: Mignon Doran, The Woodlands, 111 Woodland Avenue, Lexington, KY 40502.

-Basil Overton, World Evangelist, December, 2001, pages 1,2, Note: This is a timed piece. Some of those enlisted as living may be now deceased.

Another Sketch On Adron Doran

Adron Doran was born in Graves County, Kentucky, on September 1, 1909. He was baptized in 1927 by Alonzo Williams. He is married to the former Mignon McClain.

He attended Freed-Hardeman College for two years, then studied at Murray State College where he received the B.S. and M.A. degrees. He also held the degree of Ed. D. from the University of Kentucky.

His career in education was long and impressive. Brother Doran was for fifteen years a high school teacher, principal, and basketball coach. He served two and one-half years as Director of Teacher Education and Certification in the Kentucky State Department of Education.

Brother Doran began preaching in Arlington, Kentucky, in 1928, one year after he was baptized. He has continued to preach on Sundays and each summer holds two meetings, one in June and one in August. There was no congregation of the church in Morehead when Brother Doran moved there in 1954. They began meeting with seven members in the basement of one of the dormitories on campus. Today, with the help of other congregations and individuals, they have erected a building, and are providing spiritual assistance to the large number of Christian students enrolled at the State College.

Brother Doran was for ten years a member of the Kentucky House of Representatives and served for one term as Speaker of the House. He was honored by the Kentucky Press Association as Kentuckian of the Year in 1954.

Adron Doran died November 23, 2001 at the age of 92. He was buried in the Highland Park Cemetery in Mayfield, Kentucky.

It was the privilege of your webmaster to visit with Brother Doran on one occasion. He spent about two hours helping me locate the final resting place of some of the great preacher of the Restoration Movement buried in the Lexington, Kentucky area. At the age of 91 he was still very sharp, and knew specifically many historical locations. He was a great servant in the kingdom.

Source: Gleaned from The Ministers' Monthly Vol. X No.9, May, 1965, J. Cliett Goodpasture and other information.

Another Site Giving Info On The Life Of Adron Doran 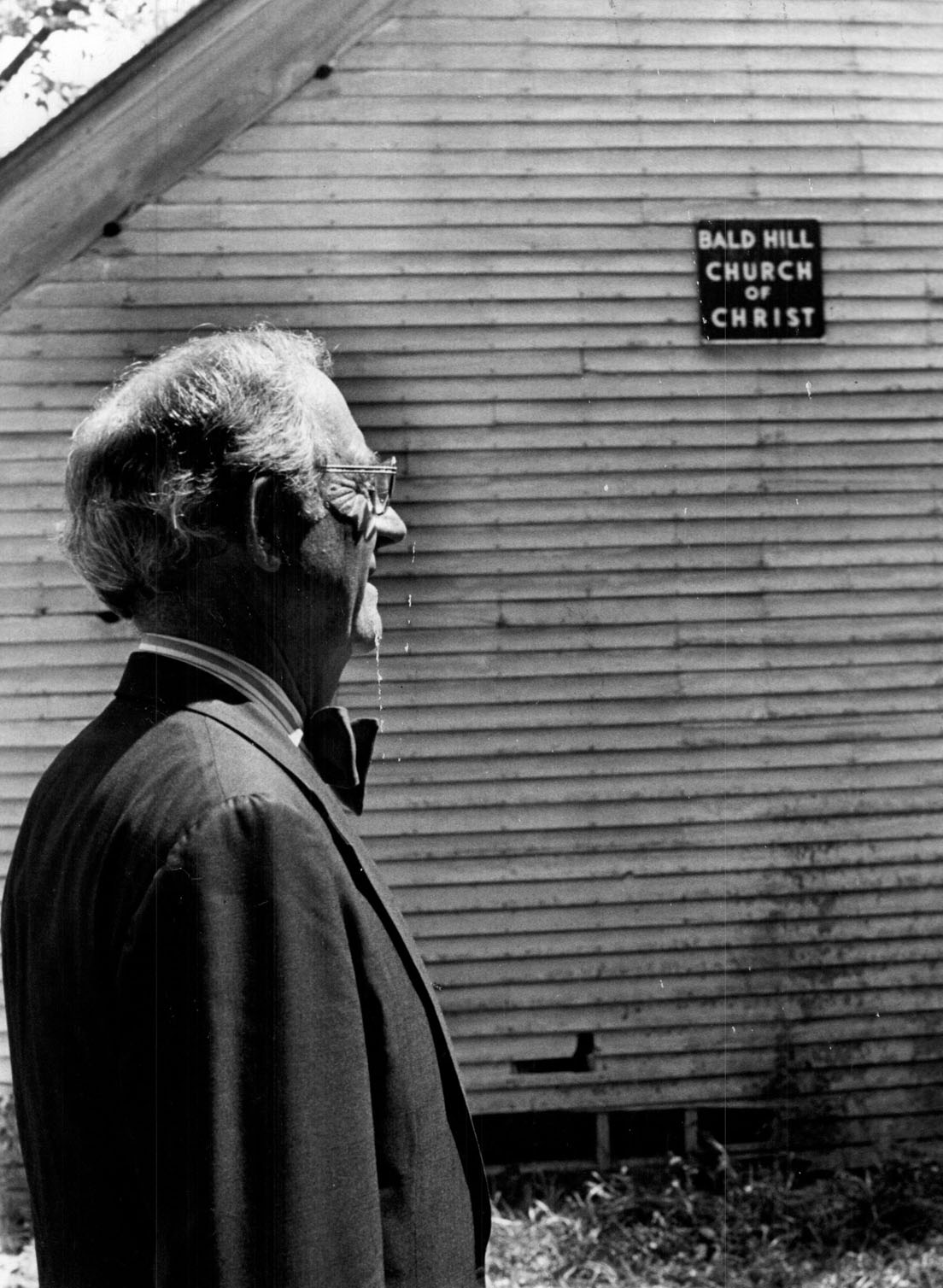 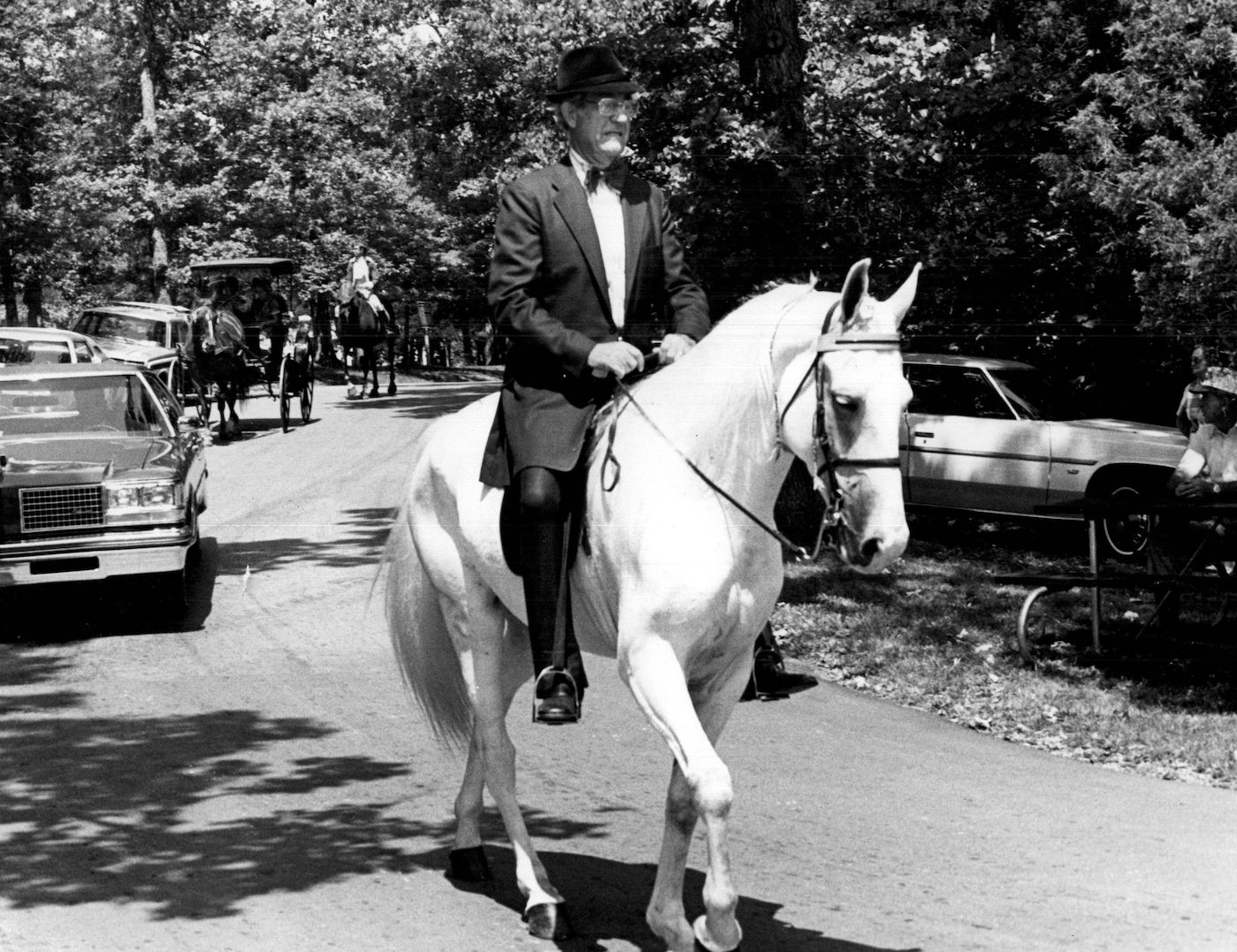 Life Of Hall Laurie Calhoun (3 Megs; 49:37 Mins.; Adron Doran Presented This Lecture On the Life Of Hall L. Calhoun At The Freed-Hardeman Lectures In 1982)

Directions To The Grave Of Adron Doran

Adron Doran is buried in the Highland Park Cemetery In Mayfield, Kentucky. In West Memphis, Arkansas take I-55 North. Take I-155 toward at Dyersburg, Tennessee and head north of Dyersburg toward Union City. Coming into Union City take the Hwy 51/45 bypass. Head north into Kentucky on Hwy. 45. toward Mayfield Kentucky. It will become the Purchase Parkway. Take Exit 21 on Purchase Parkway. Go south on Highway 45. Go east on Macedonia Street. Turn left on 9th Street. Take the first right after crossing West Willow Dr. From the sign you can see a towering pointed monument about 20 feet tall to the right. Pass the entrance sign and turn left. The marker is to the left about 15 graves.

Interestingly there are no dates or other information on the marker. Only the names Adron and Mignon Doran.
Special Thanks are extended to Tom Childers of Henderson, Tennessee who visited the grave of Adron Doran in July, 2003 and sent both pictures and directions to the gravesite. 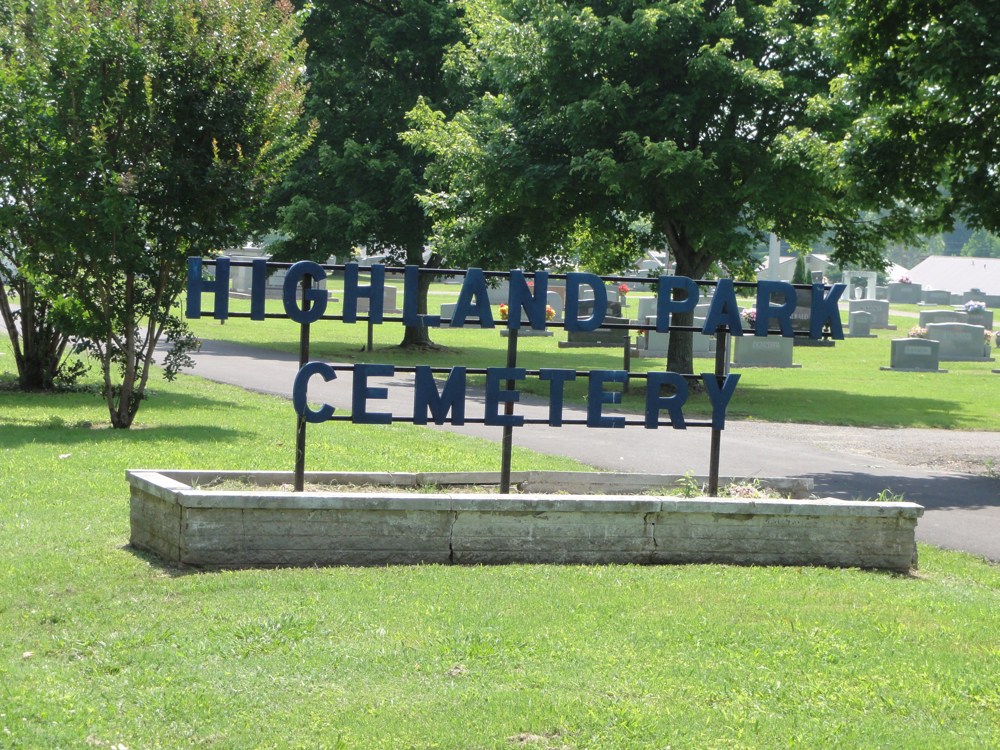 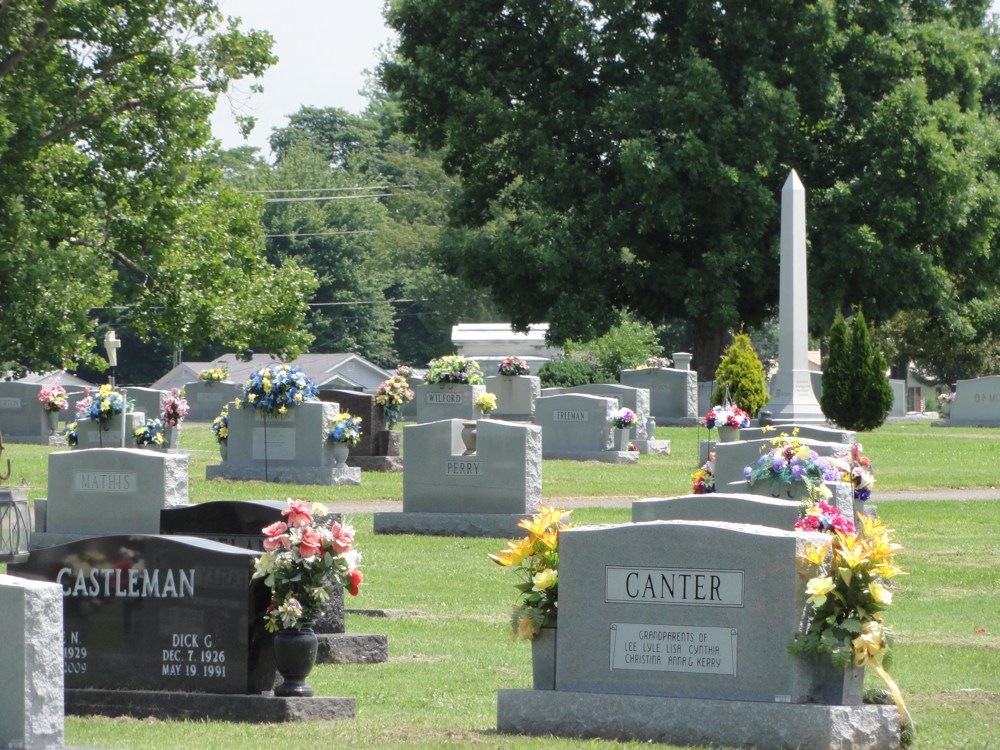 Zoomed In From West Willow St. 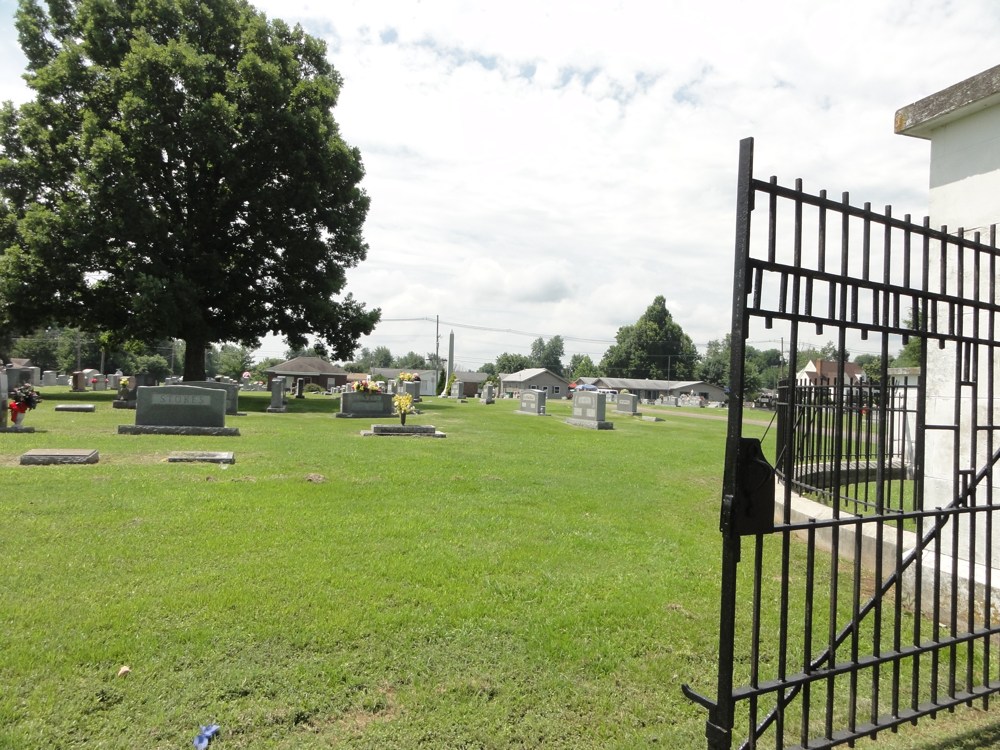 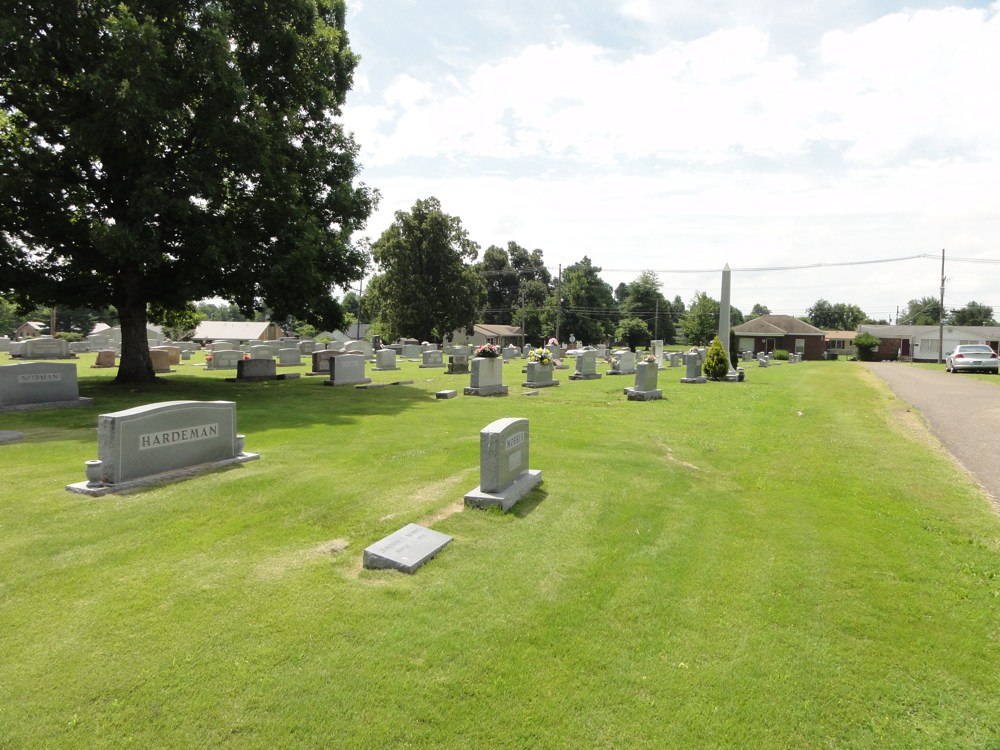 John B. Hardeman Grave To Left, Doran Obelisk In Distance 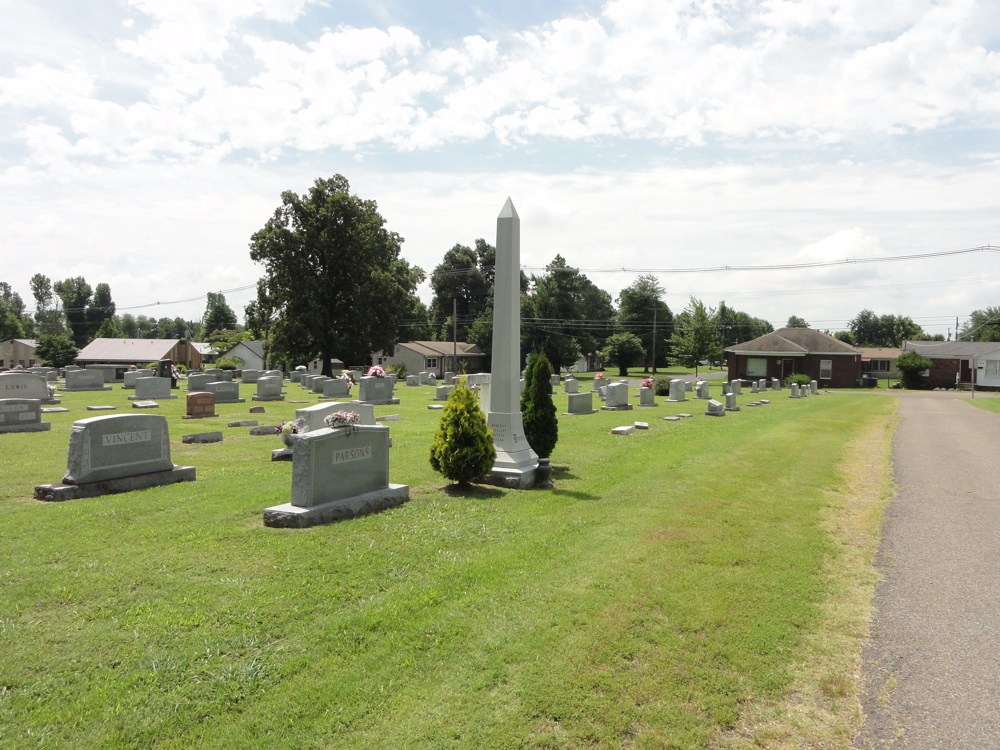 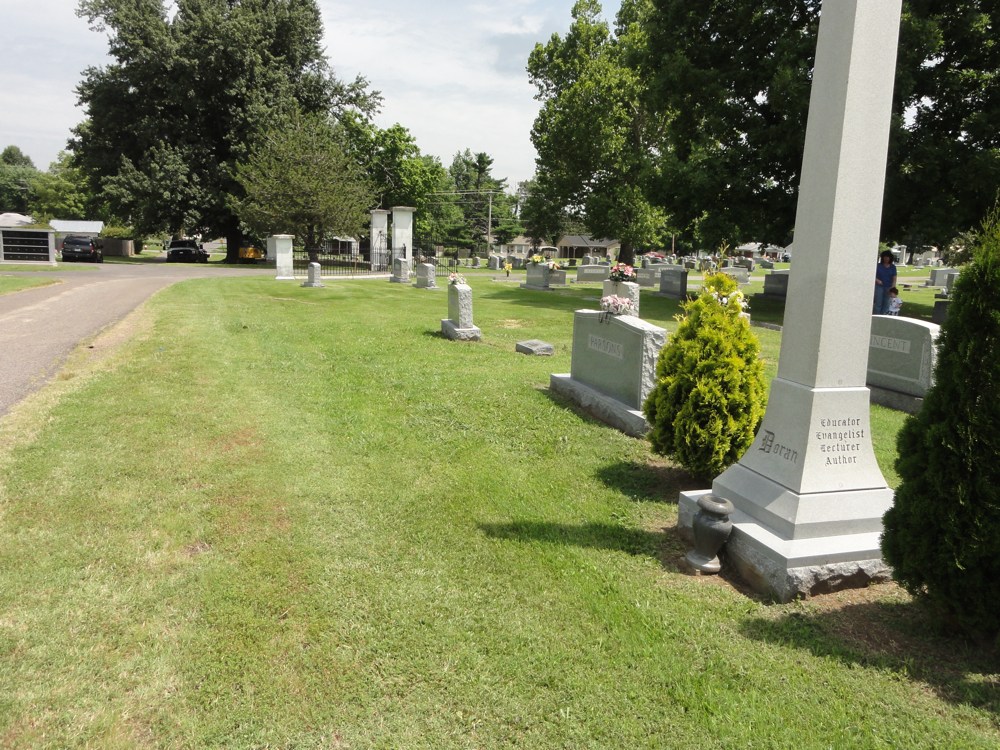 Looking Back Toward Gate - John B. Hardeman Is Buried In Line, Near The Gate 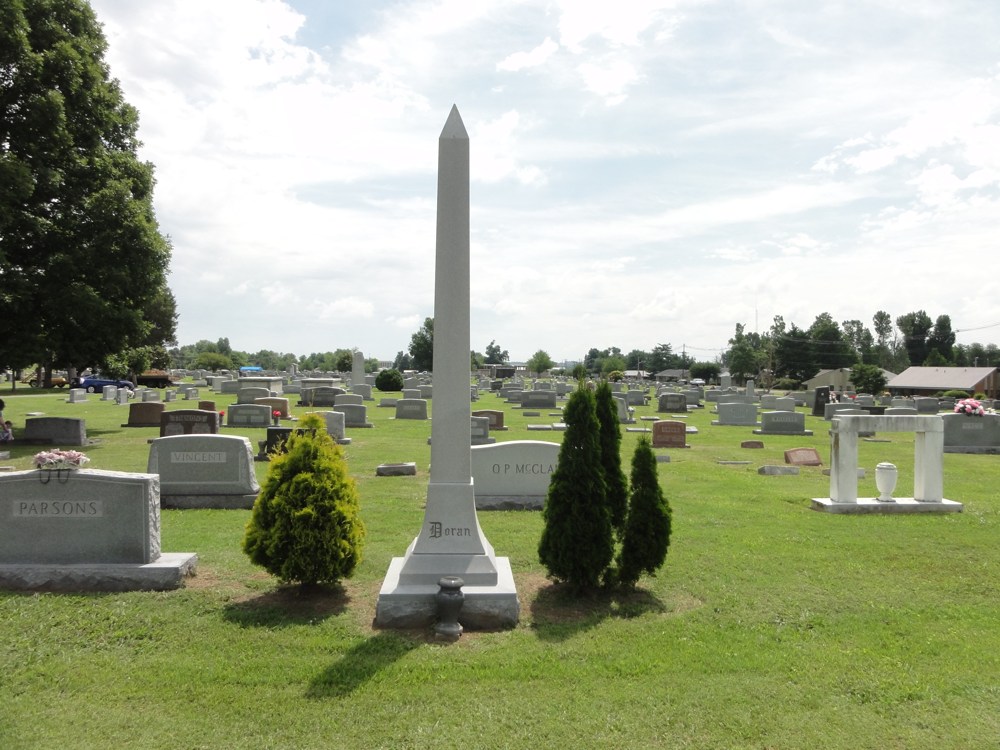 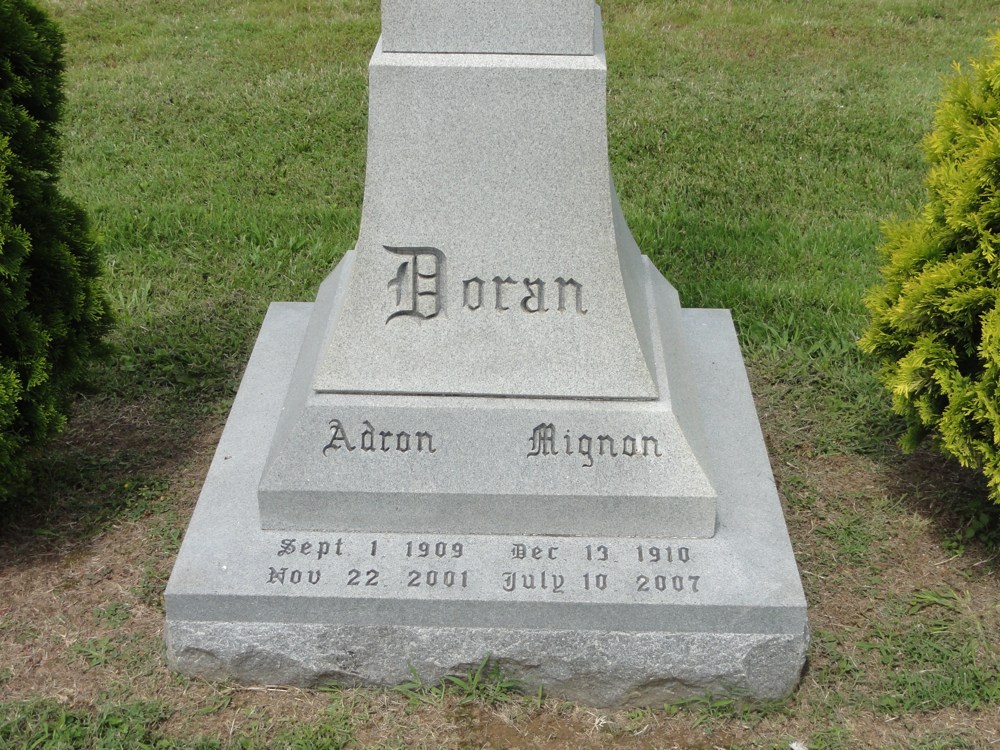 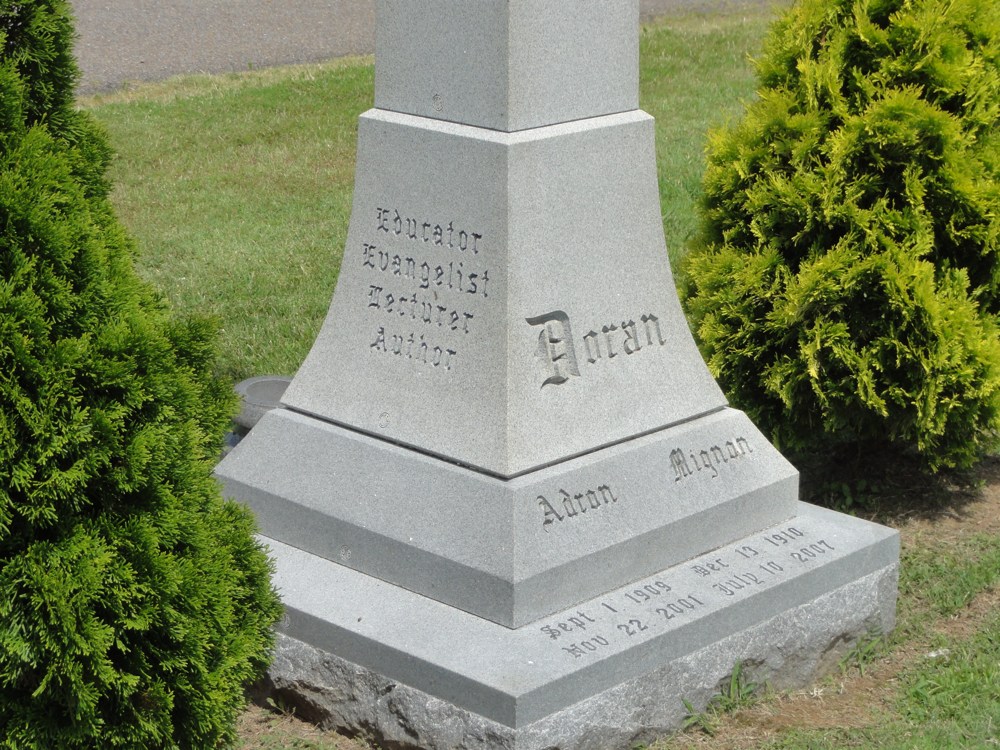 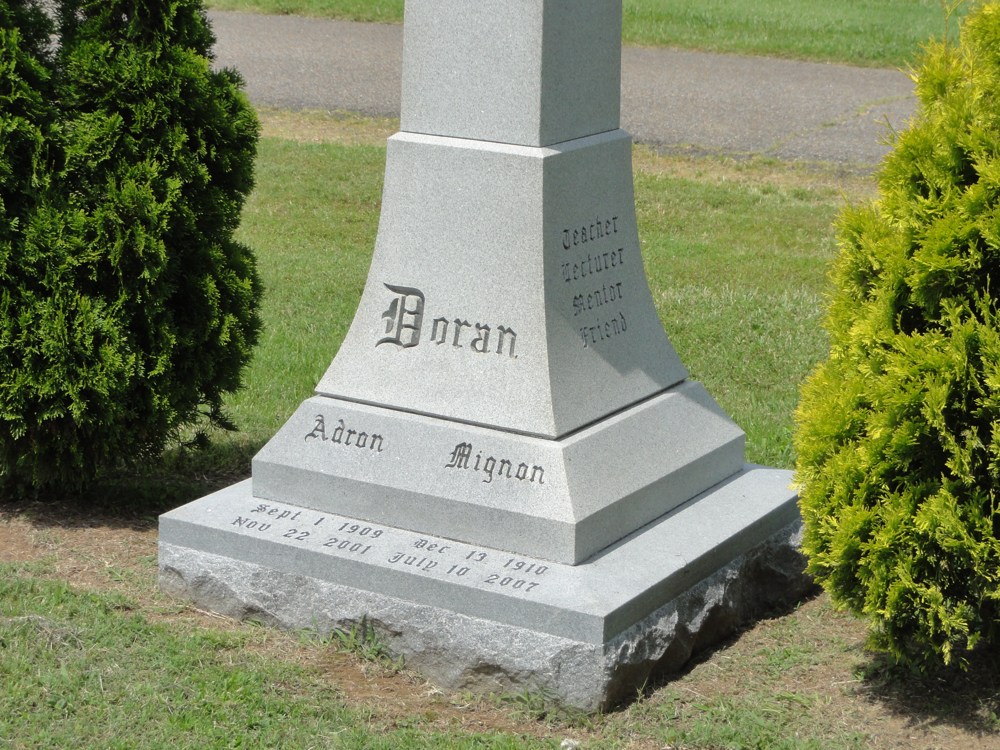 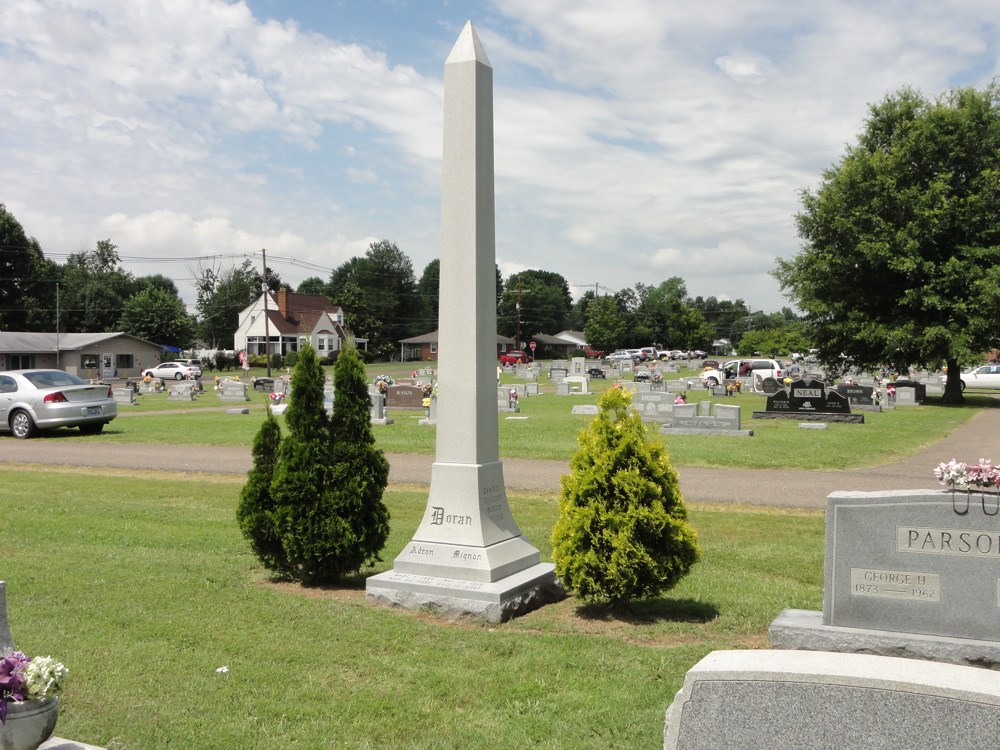