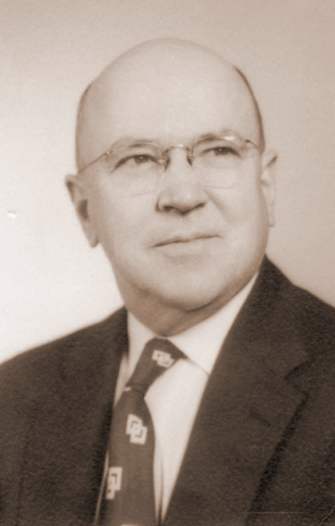 John B. Hardeman was born at Henderson, Tenn., September 2, 1893. He received his early training in the public schools of Henderson and graduated from Freed-Hardeman College. Later he received his B.S. degree from the Murray State College.

Three years were spent in teaching in the elementary schools of Tennessee, after which he moved to Kentucky and became principal of a high school, in which capacity he served for eight years. He was County Superintendent of Schools for eight years. Five years ago he gave up the teaching profession to devote his entire time to the preaching of the gospel.

He became obedient to the gospel at the age of fourteen, and preached his first sermon in August of his sixteenth year. During the years while engaging in the schoolwork he preached every Lord's day and conducted meetings through the summer months. His evangelistic work has been done principally in the Southern States.

At present he is the minister for the Mayfield (Ky.) Church. He has labored with this congregation for the past sixteen years, during which time it has grown from a membership numbering fifty to more than six hundred.

1. Give brief history of the people.
2. Study of their conversion profitable.

(a) A demonstration of the power of the gospel.
(b) Teaches us how to make the proper approach.
(c) The marvelous change wrought by the gospel.

4. The effect upon those who received the word.

In Memory of John B. Hardeman, Sr.

(Preached at the Seventh and College Streets Church of Christ, Mayfield, Kentucky, where he labored for twenty.five years, February 25, 1963.)

Since receiving word of my responsibility this afternoon, constantly this thought has been running through my mind—an extraordinary person has lived among us and now has gone from us. Yet Brother Hardeman seems not far from us, for everywhere you look reminders are visible, so much so that he seems just around the corner.

You are his epistles. Stamped deeply on many of you, his family, his children in the gospel, his neighbors, his friends, his fellow-citizens in the kingdom of Christ is John B. Hardeman. What many of you are now indicates the greatness of what he was. Your ideals, your aspirations, still carry the imprint of this man of God who was with you for so long. We cannot but give him honor, and I have many reasons for joining you in honoring this Christian husband and father, faithful gospel preacher, loyal citizen of his community and great teacher and counselor, John B. Hardeman, Sr.

Imperfect man evidences frequently his lack of perfection. Soldiers of the cross are no exceptions. Fallible man stands by as a drug store quarterback ready to criticize, but when this life is over we shall all stand before a perfect God of mercy, of compassion, and of love. At this time, in spite of the inadequacies of words and the deep emotional feelings of the hour, I would like to read the following tribute to our departed loved one:

Like the great man of faith, Abraham, he went where he was called leaving the comforts of home to do so.

Like Joshua he challenged the people to "choose you this day whom ye will serve," and set the example before all, "but as for me and my house, we will serve the Lord."

Like Solomon he led this congregation in building this edifice as a meeting place for worship.

Like Daniel he remained true to the teaching of his youth.

Like John the Baptist he delighted in preaching to the multitudes, "Behold, the Lamb of God that taketh away the sin of the world."

Like Peter he was the rock of Gibralter in the kingdom of Christ in this area.

Like Paul he knew only Christ and him crucified, fighting a good fight, keeping the faith, and finishing the course.

Like Jesus he comforted the troubled. More than two thousand times in this county he was called upon to speak to the bereaved, speaking frequently, "Let not your hearts be troubled: ye believe in God, believe also in me. In my Father's house are many mansions: if it were not so, I would have told you. I go and prepare a place for you. And if I go and prepare a place for you, I will come again, and receive you unto myself; that where I am, there ye may be also."

Brother Hardeman was a Christian, he obeyed the gospel, lived it, and preached it sparing none of his energy available. In his ministry he qualified as a great man under the Lord's definition when he said if any man is to be great let him become a servant. Brother Hardeman literally gave his all showing the great love he had for all, for no greater love can be evidenced than laying down one's life for others.

This is the only way to die. It is true that Brother Hardeman had fleeting thoughts of retirement, but he could not say "no" to a call of service. In this area he would not practice what he preached for often he has told me to slow down, but he was unable to do it himself. A slowed-down man retired on a Kentucky farm would not be our Brother Hardeman. He died like he lived with retirement ahead and what a retirement the scriptures indicate it will be! "And I heard a voice from heaven saying unto me, Write, Blessed are the dead which die in the Lord from henceforth; Yea saith the Spirit, that they may rest from their labors; and their works do follow them." Yes, this is the way to die-among friends, and loved ones, in faith unfaltering and in hope eternal.

With such a life lived death is not comfortless. We are here to comfort, as Brother Hardeman has so frequently done, with the hope of the scriptures. This is not the end of our loved one. His works will live on, his memories will linger with us but above all there is the glorious resurrection awaiting him.

A few years ago I preached a sermon Brother Hardeman heard, and he requested the outline. The text was, "Wherefore, seeing we are compassed about with so great a cloud of witnesses, let us lay aside every weight, and the sin which doth so easily beset us, and let us run with patience the race that is set before us, looking unto Jesus the author and finisher of our faith." (Heb. 12: 1-2.) In this sermon I emphasized the great value in looking unto Jesus. Such a theme is very appropriate at this hour. For comfort look at Jesus. He became flesh and blood that he might overcome death for us. While here on this earth he said, "Marvel not at this; for the hour is coming, in which all that are in the graves shall hear his voice, and shall come forth; they that have done good, unto the resurrection of life; and they that have done evil, unto the resurrection of damnation." (John 5: 28-29.) Jesus entered the halls of death and came forth the victor. Paul said in 1 Cor. 15 that Christ removed the sting of death. There is still grief experienced in death, but because of the resurrection of Christ it is much less severe. It can be compared to a bee sting, when the stinger is removed the pain is less. Christ has removed the stinger. This is the message of the empty tomb.

Paul continued in 1 Cor. 15: 58 "Therefore, my beloved brethren, be ye steadfast, unmoveable, always abounding in the work of the Lord, forasmuch as you know that your labor is not in vain in the Lord." Brother Hardeman could have entered many different professions or could have made investments that certain incidents could have meant complete loss, but he engaged in a work and faithfulness in it that had the promise of "your labor is not in vain." You can see that it has not been in vain as you look out over this audience this afternoon. At least twenty-five gospel preachers are here to honor him; honor has been spoken by an old family friend and man of God, Boone Douthitt; and additional testimony has been made by a man of God, Flavil Nichols. I can contrast this with some funerals I have preached with two or three present to honor the dead. Brother Hardeman's physical labors have not been in vain, but the beauty of this promise is yet to come when men like Brother Hardeman stand before God to be ushered into the mansions of glory prepared by Christ. This man loved home and now he has gone to his eternal home. As he departs our deepest sympathy goes to Sister Hardeman. You are not alone in your grief as indicated by the many expressions so obvious today. Above all God is mindful and in him continue to find strength.

To the children—you were his pride and joy in the years I knew him, your problems were his problems, your successes were his pride. There are no words that can express the emptiness you will experience some day just wanting to talk to him. Your sorrow, your emptiness have a balm in the great hope contained in the resurrection. Since the passing of my father I have been looking forward to that day of reunion, and you will find comfort in the same thoughts. I share this hope with you.

To all-Brother Hardeman loved to preach the gospel. See what he obtained-abundant life today. If he could speak he would not have any other message. His heart went out to good people, his friends and neighbors that neglected preparing to meet God. Be sobered by the value of dying like our friend and brother, prepare to meet God.

Directions To The Grave Of John B. Hardeman

John B. Hardeman is buried in Mayfield, Kentucky in the Highland Park Cemetery. Also buried in this cemetery is Adron Doran. In West Memphis, Arkansas take I-55 North. Take I-155 toward at Dyersburg, Tennessee and head north of Dyersburg toward Union City. Coming into Union City take the Hwy 51/45 bypass. Head north into Kentucky on Hwy. 45. toward Mayfield Kentucky. It will become the Purchase Parkway. Take Exit 21 on Purchase Parkway. Go south on Highway 45. Go east on Macedonia Street. Turn left on 9th St. Take the first right after crossing West Willow Dr. and look for the cemetery on your left. As you enter the cemetery and past the entrance sign and through the gate, go just past the first road to the right. The Hardeman grave should be very close to the road on your right. His son should be across the road to your left.

Special thanks to Tom Childers who visited the grave of Hardeman in July, 2003. He sent the photos of the grave as well as directions. 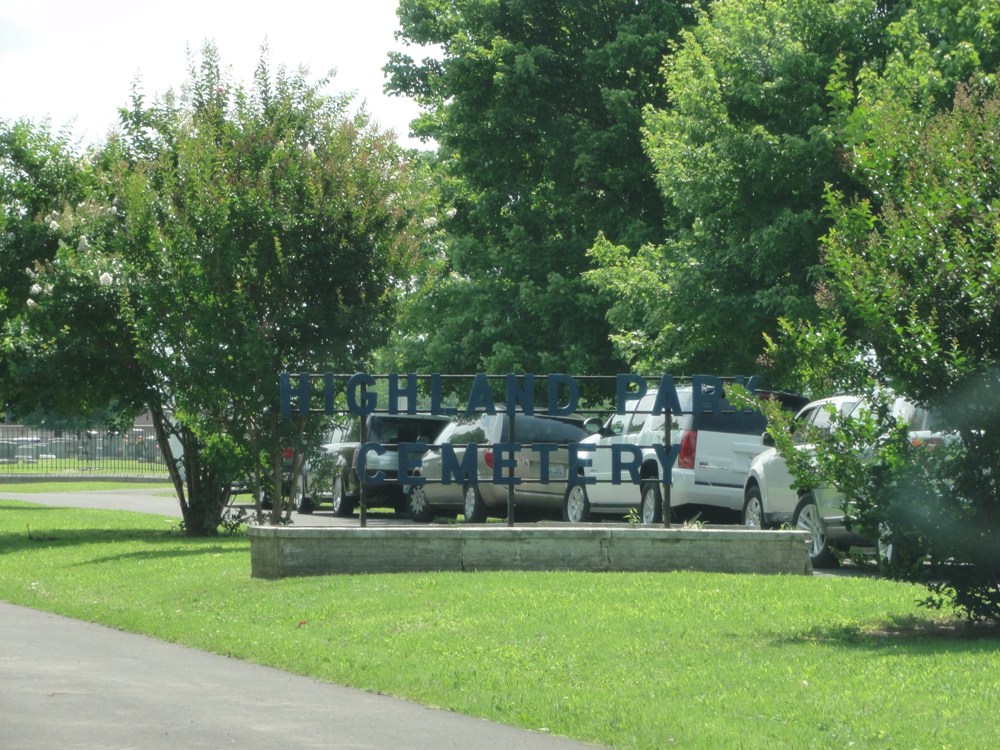 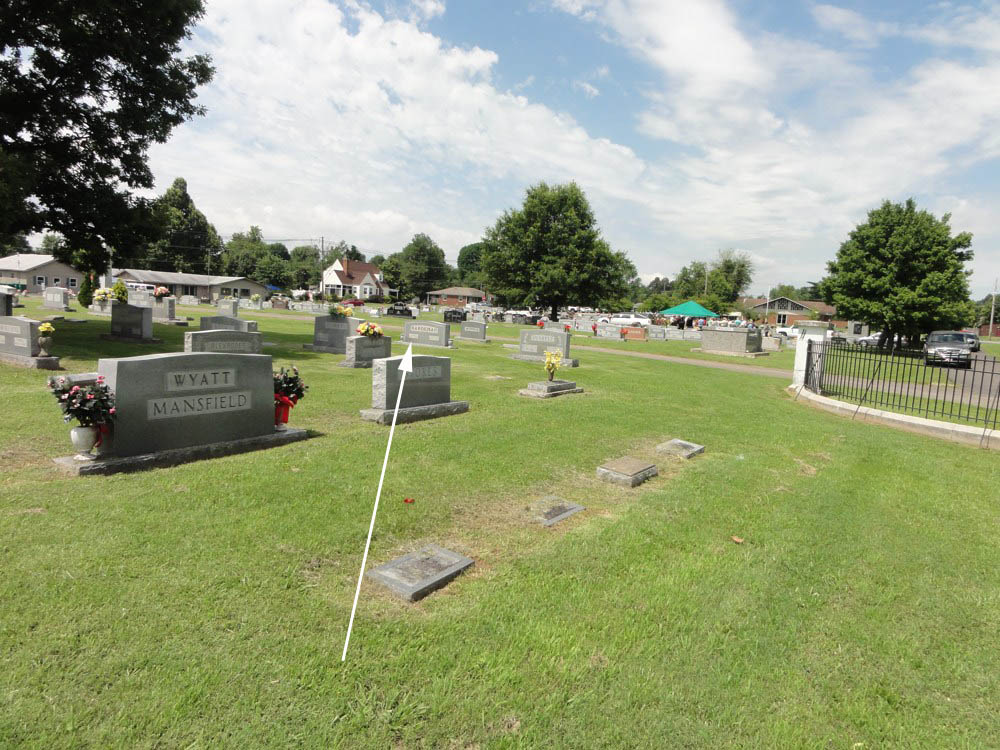 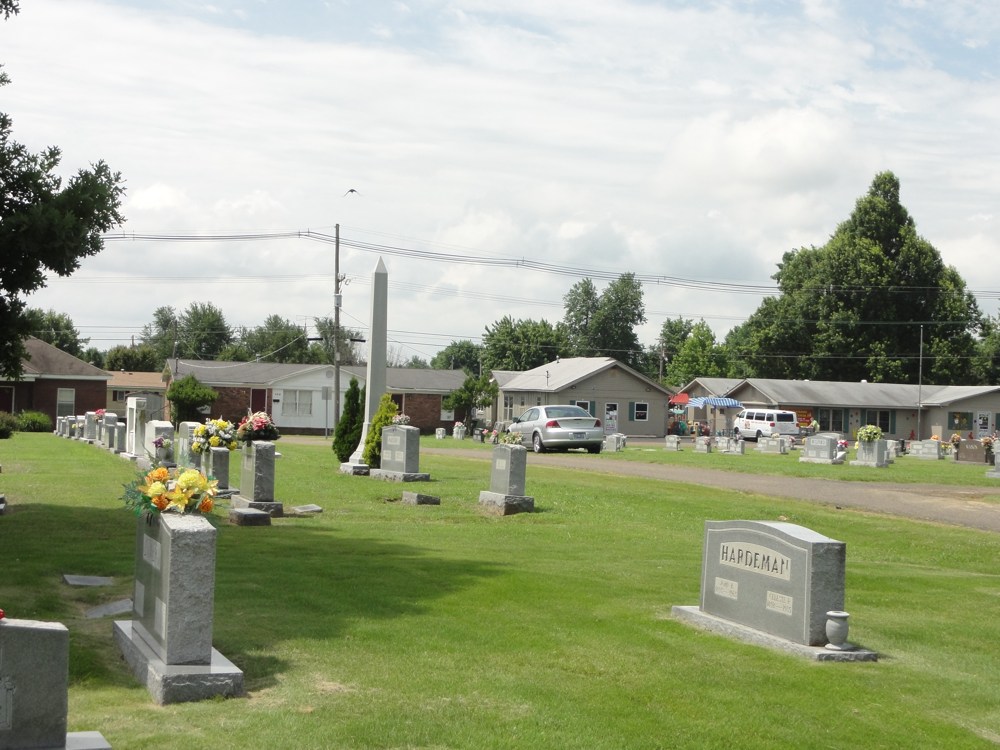 Hardeman Plot In Foreground, Adron Doran Obelisk In The Distance 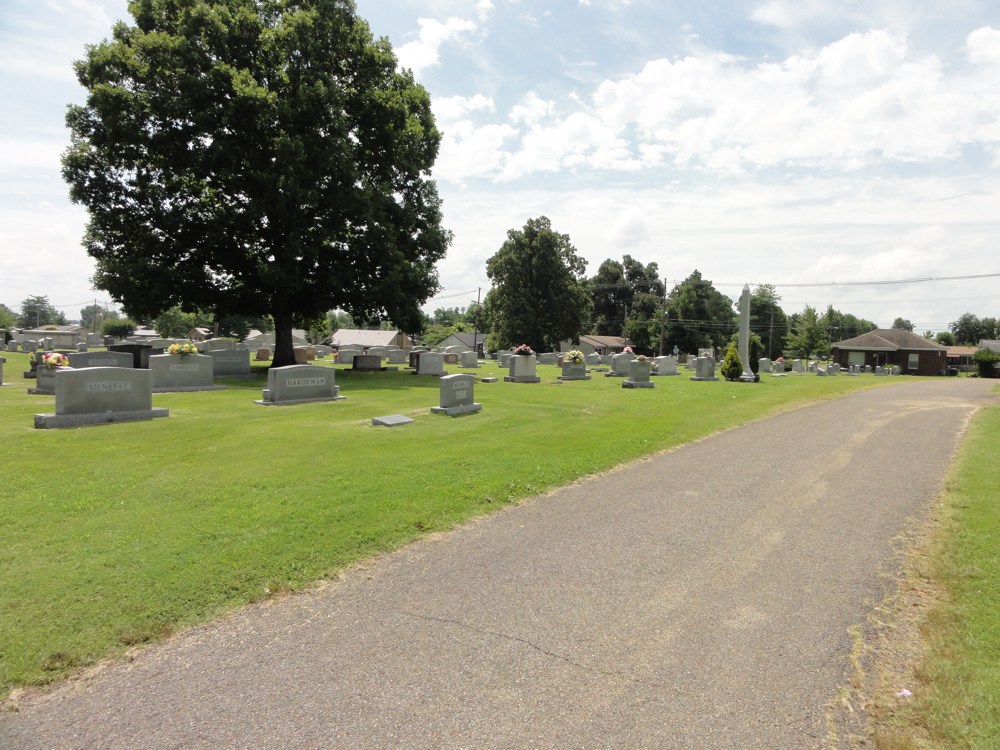 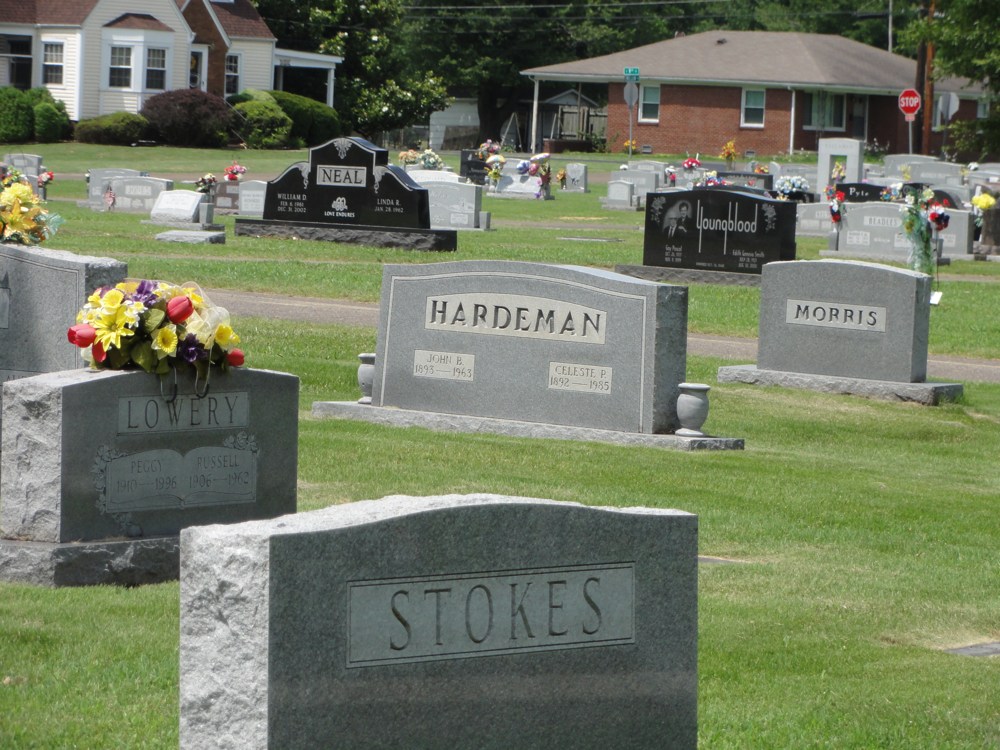 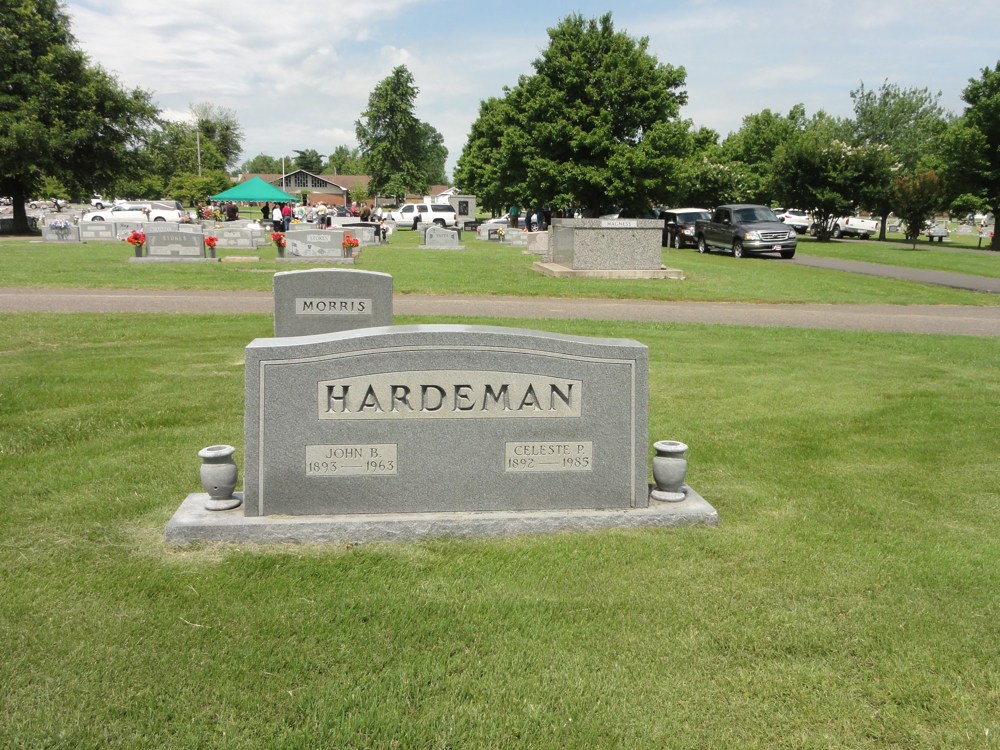 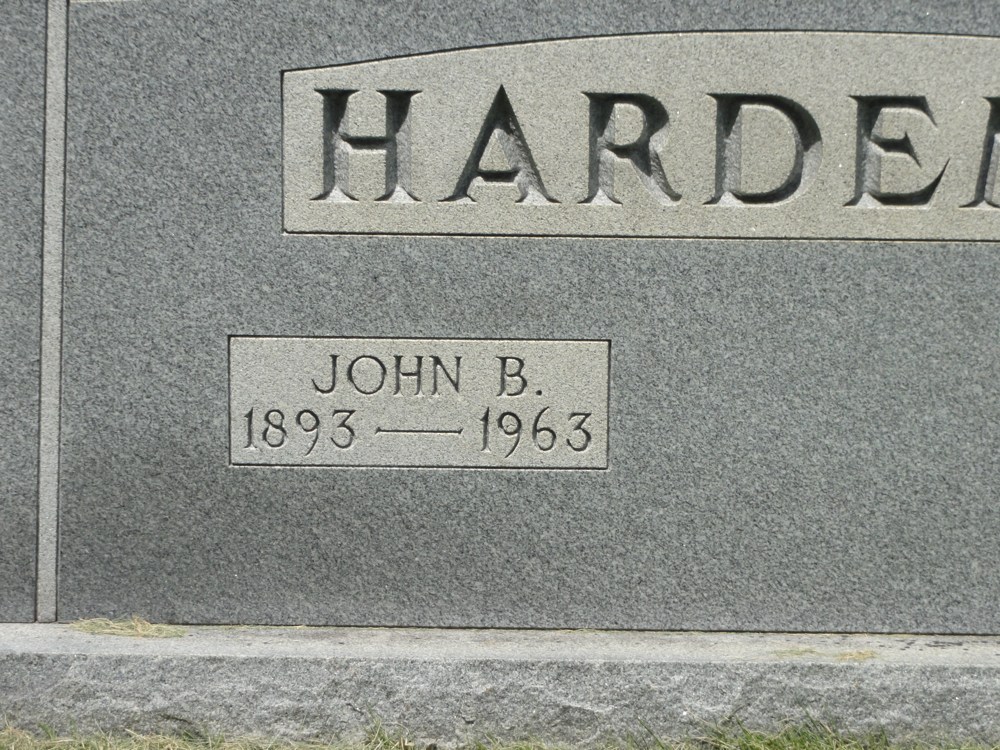 John B. Hardeman, Jr.
Son of J.B. Hardeman, Sr., Nephew of N.B. Hardeman,
& Elder of the 7th and And College Church of Christ In Mayfield, Kentucky
-buried across drive from his parents, near gates- 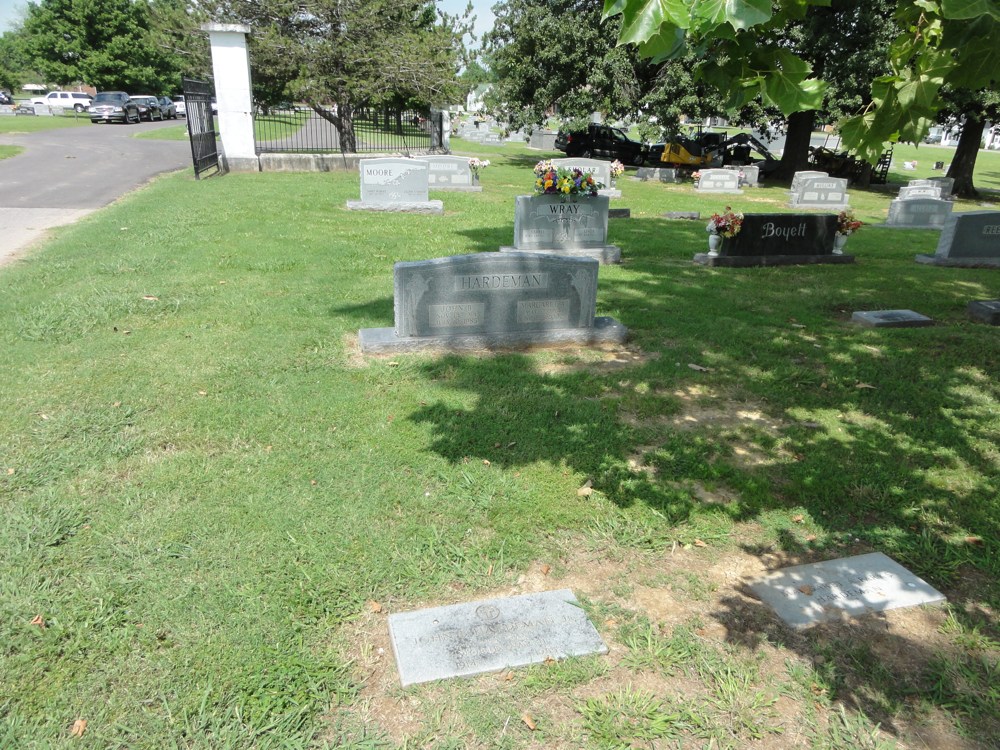 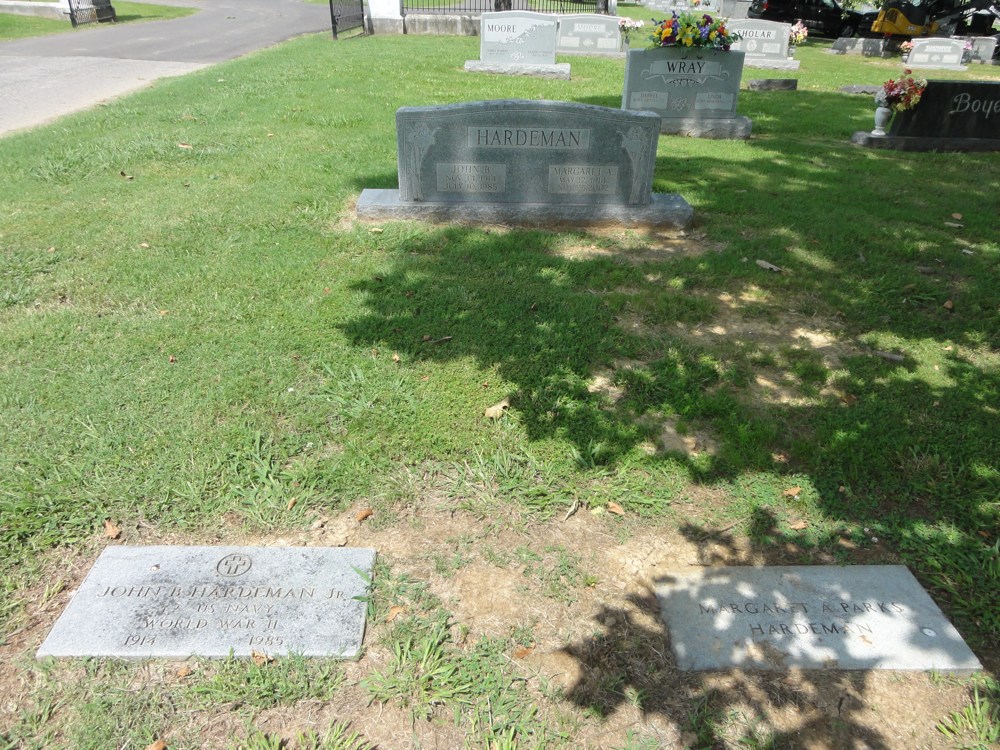 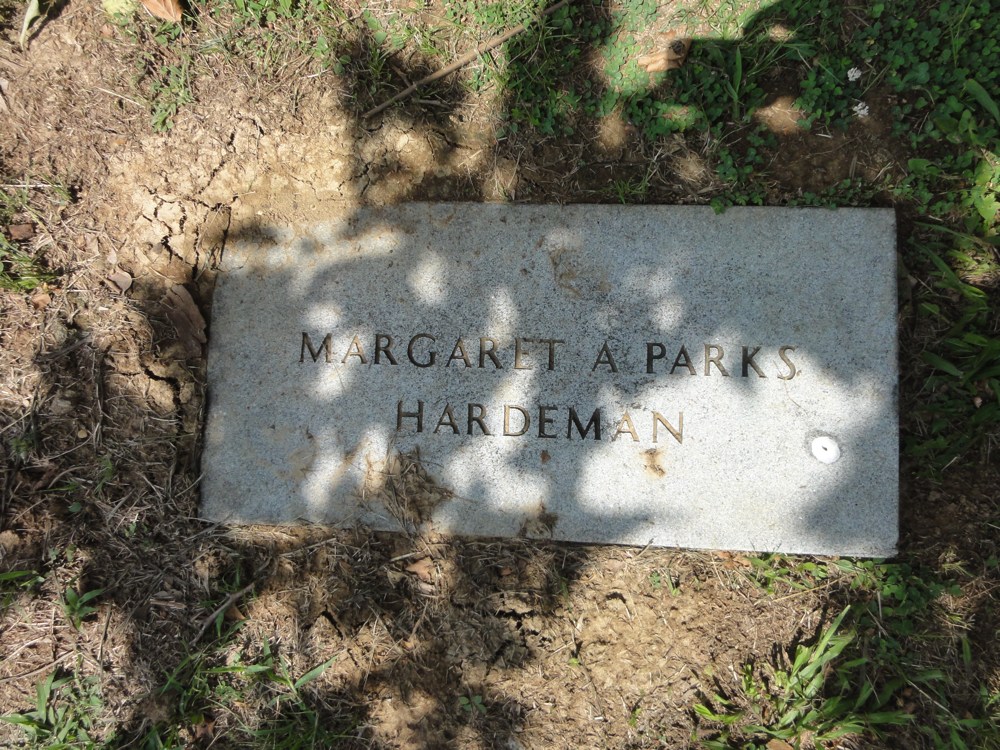 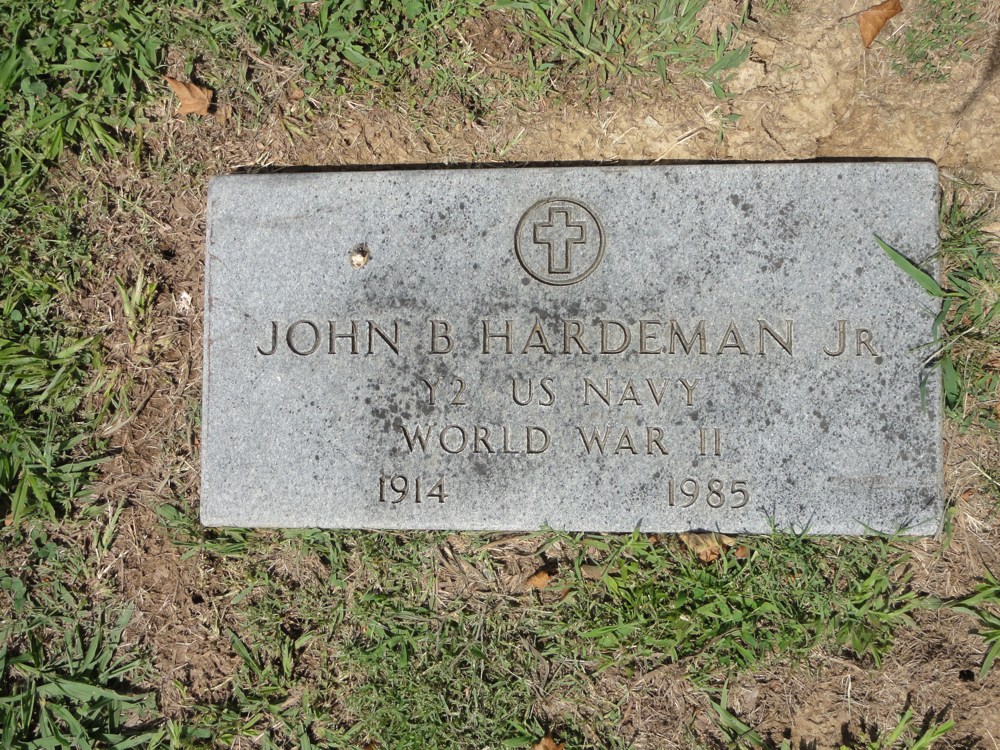 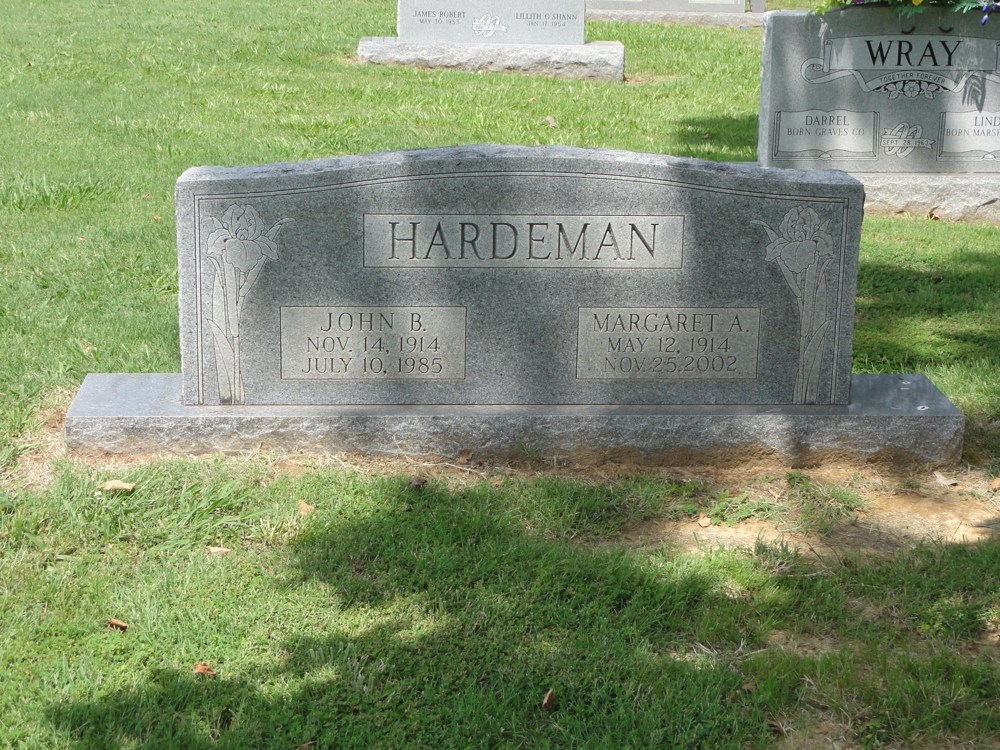