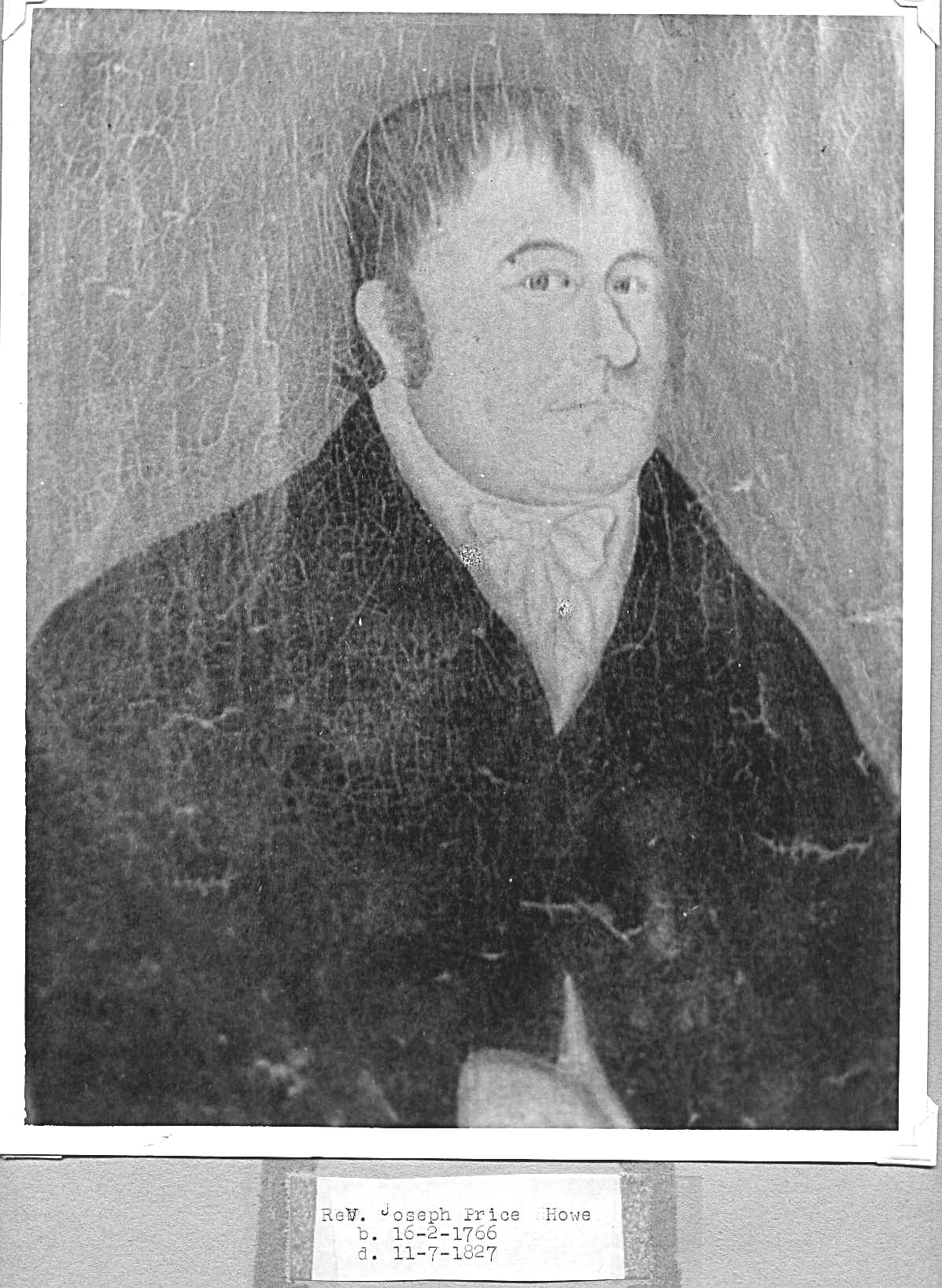 Howe's Interaction With "Raccoon" John Smith Through His Daughter

In May, 2011, it was the joy of your web editor to visit the grave of Joseph P. Howe at Old Springfield Presbyterian church graveyard, in Sharpsburg, Bath County, Kentucky, just a few miles north of Mt. Sterling. With me was C. Wayne Kilpatrick, Tom L. Childers, the local preacher at the Rolling Hills church of Christ of Mt. Sterling, Dan Murphy, Gary Hampton and some preacher students from East Tennessee School of Preaching in Knoxville, Tennessee.

Below is an excerpt from the pages of the Life of Elder John Smith, by John Augustus Williams. In it, Williams describes events surrounding the baptism of Jacob Coons and his wife of Montgomery County, Kentucky around 1825. In particular, is three-way interaction between Smith, Coon’s wife, Matilda Jane Howe, and her father, Joseph P. Howe, a powerful Presbyterian minister who lived in the area. He wrote:

“Among the first fruits of the ancient gospel at Spencer were Jacob Coons and Absalom Rice, two young men, who presented themselves for immersion, the former in 1825; the latter, not long afterwards. They had been diligent students of the Scriptures, and had learned to discriminate between the facts of the gospel and the speculations of men. Smith had sympathized with them through all the stages of their spiritual development, and had anxiously watched till the Christ was formed within them.

“When young Coons came forward, Smith, who had extended the invitation, told him to go on in his own way, and say to the church whatever he pleased. The candidate remarked that he had been for some time concerned on the subject of religion, but had seen no strange sights and had heard no strange sounds; that he believed with all his heart that Jesus was the Christ, and wished to obey him. Smith arose and said:

"Brethren, with the Bible in my hand, if I were to die for it, I do not know what other question to ask him!"

“Coons was examined no further, but was admitted to baptism on that simple confession. This incident, occurring as early as October, 1825, and taking place with the approbation of a church that had no constitution or creed but the inspired word, may be recorded as the first exemplification of the ancient order with the bounds of the district, if not of the State.

“Jacob Coons had, some time before his immersion, married the daughter of a Presbyterian clergyman, who lived in the neighborhood. She had been baptized in her infancy; but at the time of her marriage she was a thoughtless, worldly-minded woman. Jacob's immersion displeased her family, who had hoped to see him one day in full religious accord with his wife. Fearing now that the influence of his example and teaching might lead her from the faith of her church, they let pass no opportunity of confirming her in her early religious belief. They loaned her books and pamphlets, and urged her to read them with her husband, for whose salvation also they seemed to feel a deep concern. They recommended especially to her perusal a tract by Finley on the doctrine of Infant Church Membership. The impression which that pamphlet made on her mind disturbed Jacob; for, after reading it, she declared, with emphasis, that it was God's truth. In his perplexity, he laid the matter before Smith, and begged his advice.

"Does your wife profess to be a Christian?" Smith inquired.

"She acknowledges that she is a vain and giddy creature," said he; "and she even confessed to me the other day that she was a great sinner."

“Jacob did as he was instructed. His wife denied that she was a member of the church, but was confounded when asked when and why they had excluded her.

“In her perplexity, she went to see her father; and Jacob, anxious for truth's sake and his wife's, went along with her, to hear the explanation.

"Yes, my daughter; I initiated you when you were an infant."

"But, father, you know that I have always been a worldly-minded girl. Do you think that it is right for me to say that I am in the church?"

“This was satisfactory to her; but Jacob, still perplexed, reported the next day the whole matter to his friend and pastor. After receiving from him the proper counsel, he returned home.

"Jane," said he, carefully following the advice of Smith, "didn't your father say that he had put you into the church when you were a child?"

"Yes; but he said that I was only a tare," replied his wife.

"Your father surely could not have put you there, Jane; for the Book says: 'He that sows the tares is the devil!'"

“Jane read, and forthwith went again to her father to have this startling difficulty solved.

"Father," said she, "did you not tell me that yon had initiated me into the church yourself?"

"Yes, my daughter. But what is it that bothers you now?"

“The old man looked at the passage, and, groaning aloud, began to walk the floor; but he made his daughter no reply.

“From that time Jane listened to her husband's expositions of Scripture, and, under his teachings, soon presented herself for immersion.

A Missionary Of The Synod Of Virginia

The Rev. Joseph P. Howe came from North Carolina in 1794, and was ordained July 29th, 1795, over Little Mountain (Mount Sterling) and Springfield. He was a good man, and took a conspicuous part in the Great Revival. Although he was tedious and wearisome as a preacher, he excelled in exhortation, and prayed and sang well. In this way he led the meetings to great advantage. There is a diversity of gifts, but the same Spirit. At his death, in 1830, he bequeathed the sum of two hundred and sixty-seven dollars to Centre College.

-History of the Presbyterian Church in the state of Kentucky, by Robert Davidson, p.120
Note: There is little doubt that J.P. Howe knew Barton W. Stone very well, as they both were members of the Presbyterian church, arriving closely to the same time in the area, Stone from North Carolina, and Howe from Virginia. Old Springfield is but a few miles from Cane Ridge Meetinghouse in Bourbon County. Howe would have been aware of Stone's departure from the Presbyterian church along with other prominent Presbyterian ministers of the Transylvania Presbytery in 1803, though at this writing there is nothing we are aware of as to Howe's particular involvement.

Directions To The Grave of Joseph P. Howe 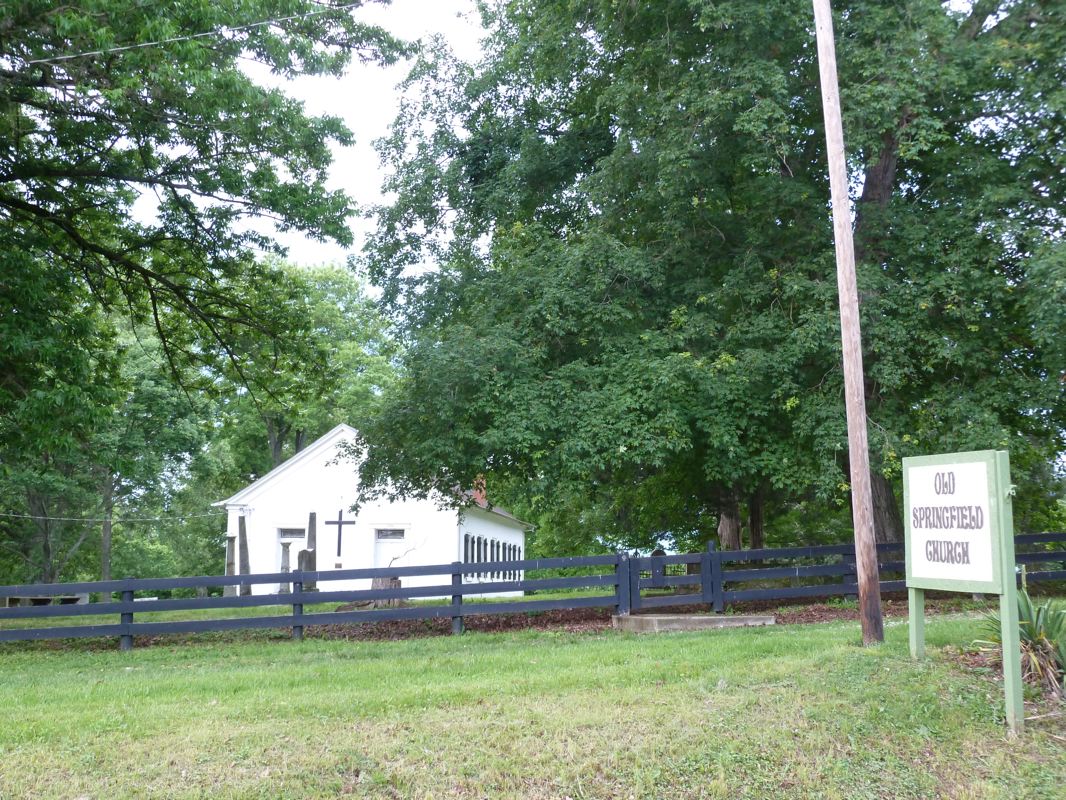 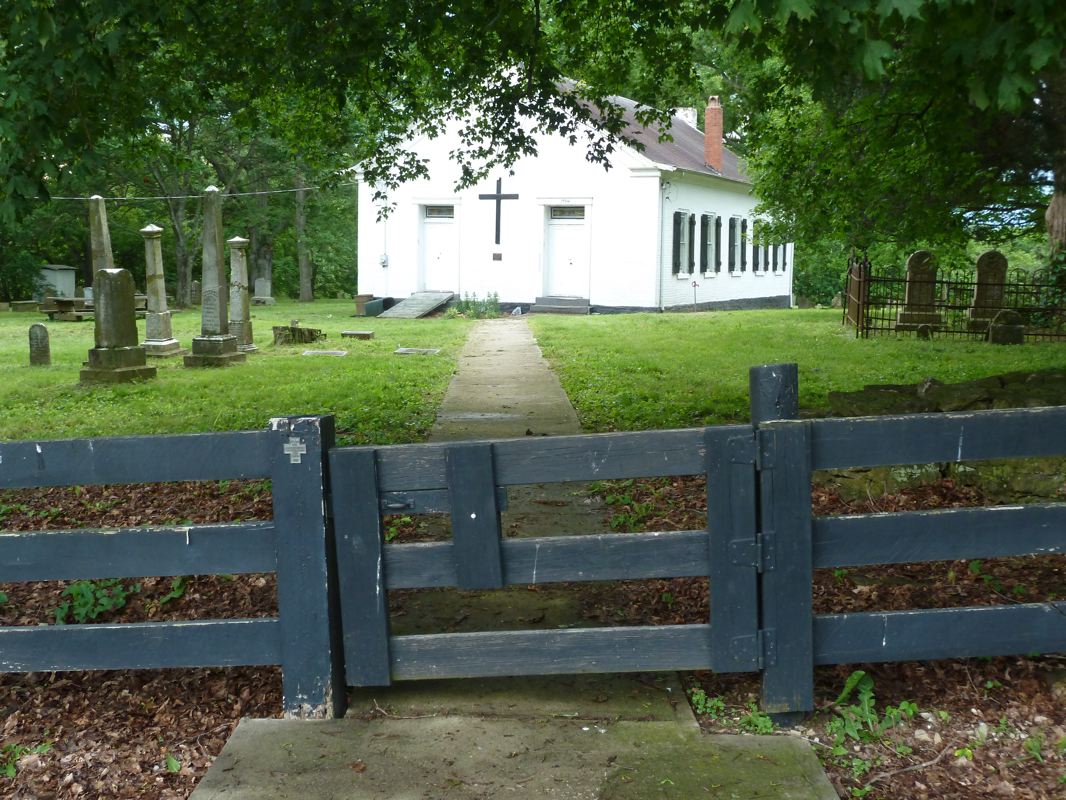 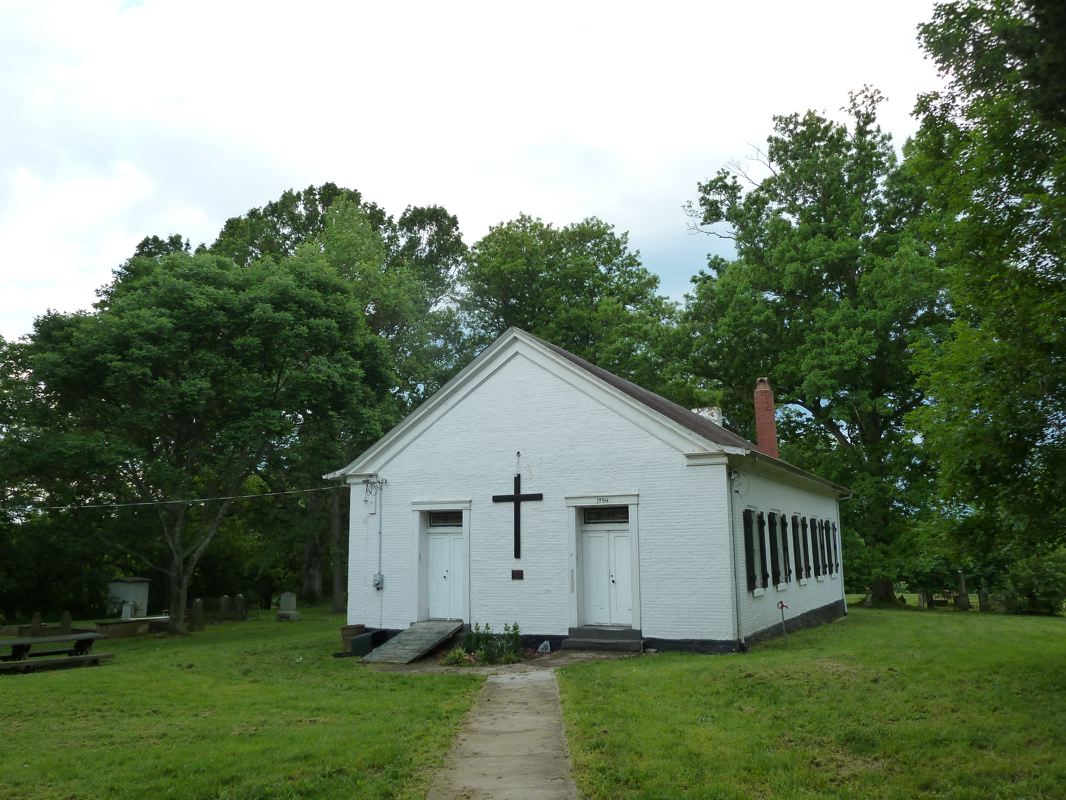 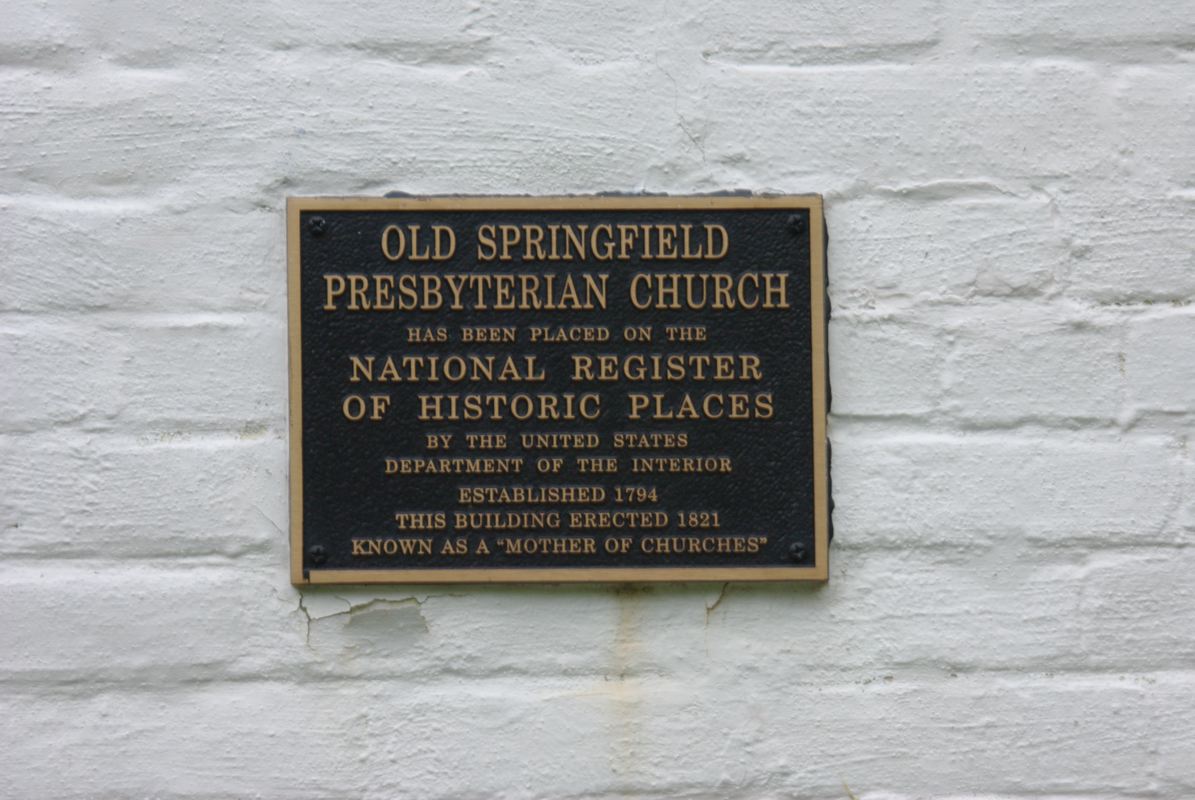 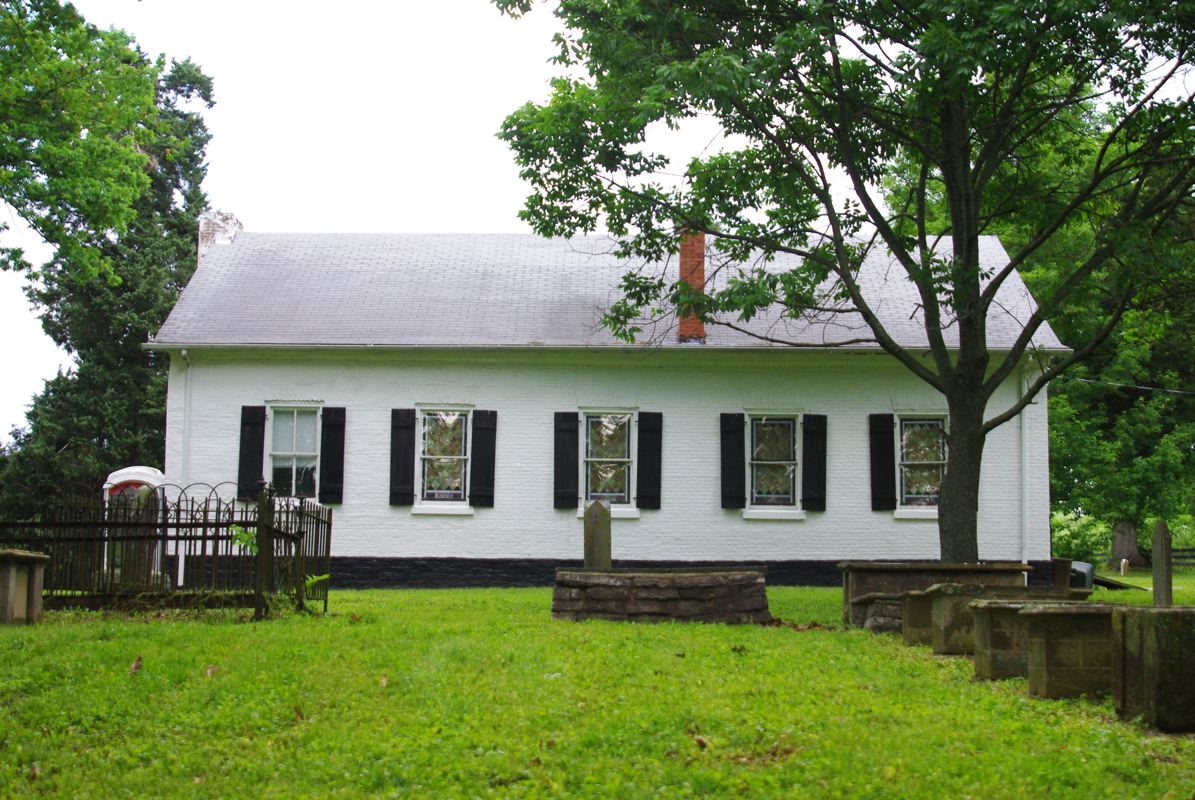 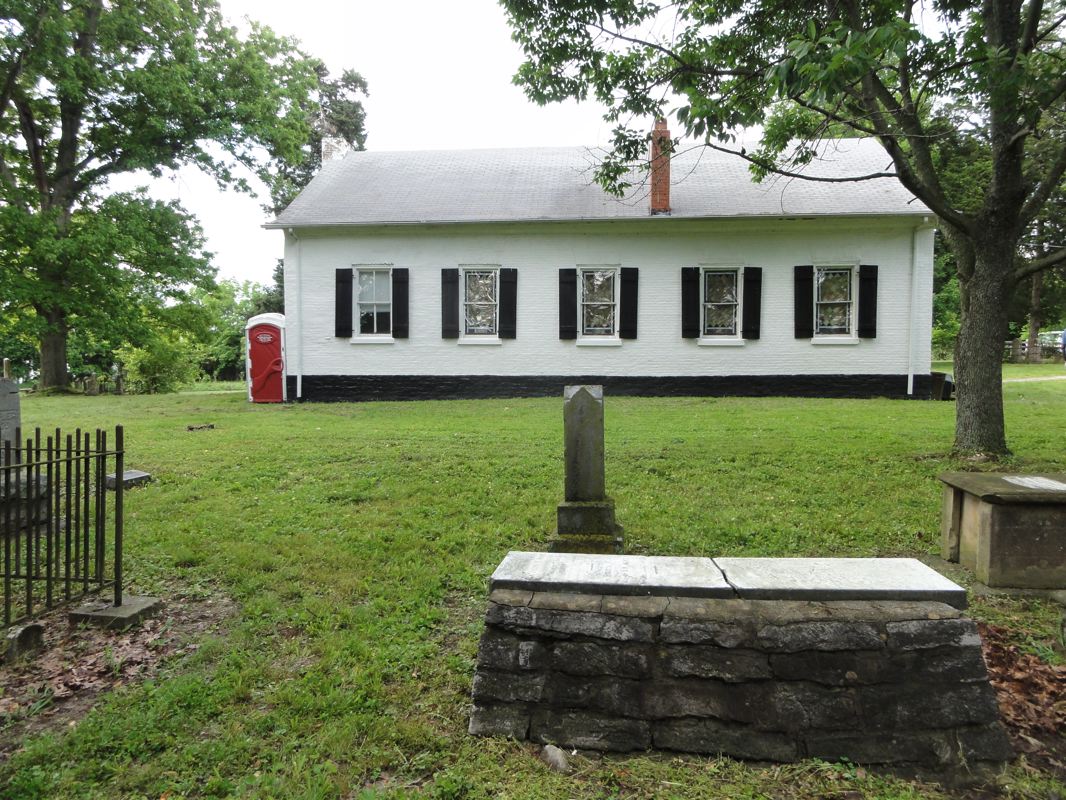 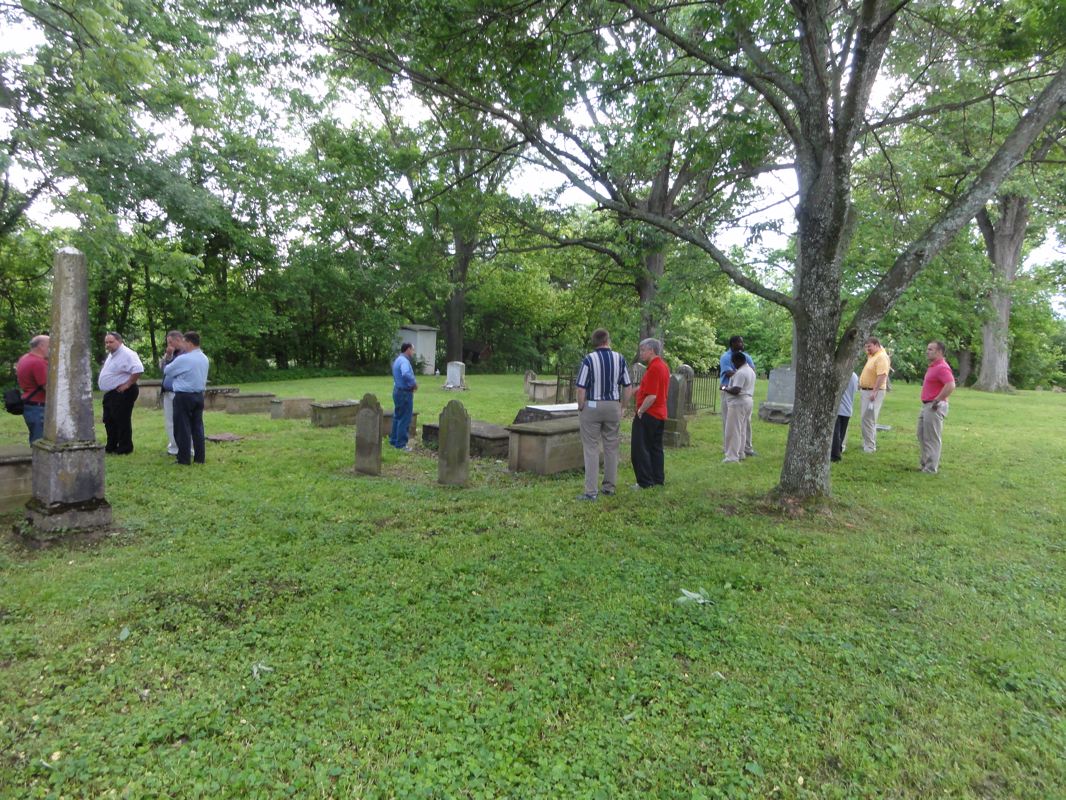 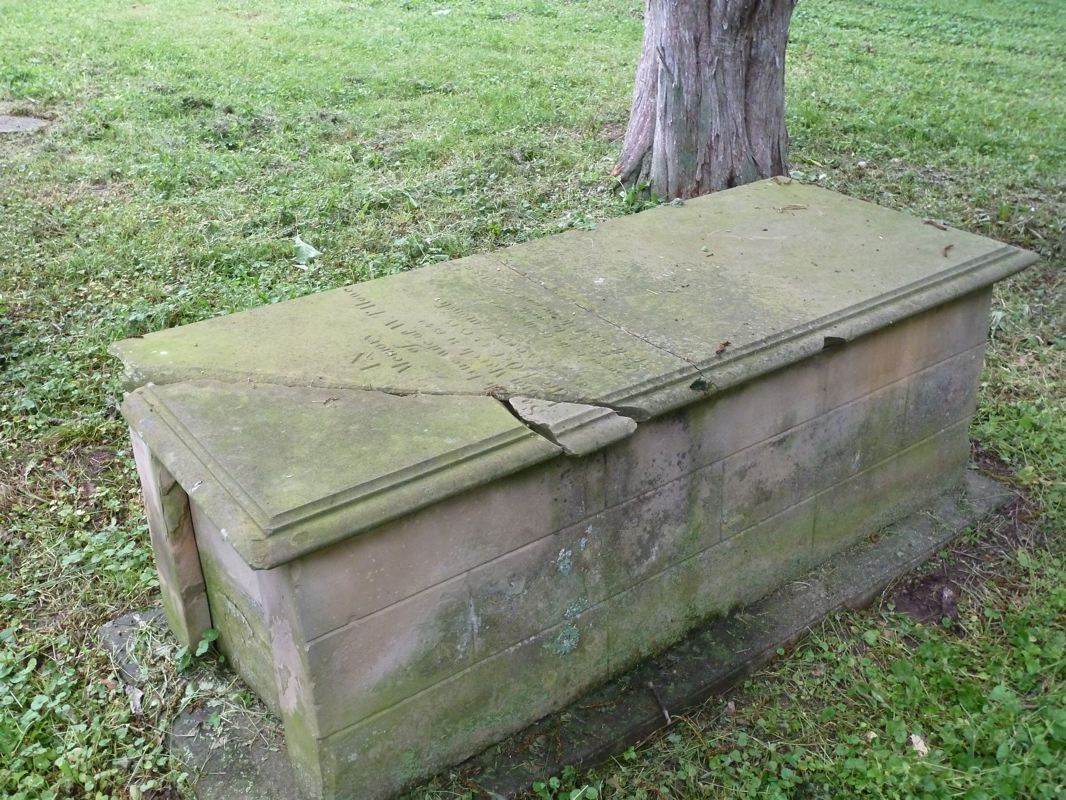 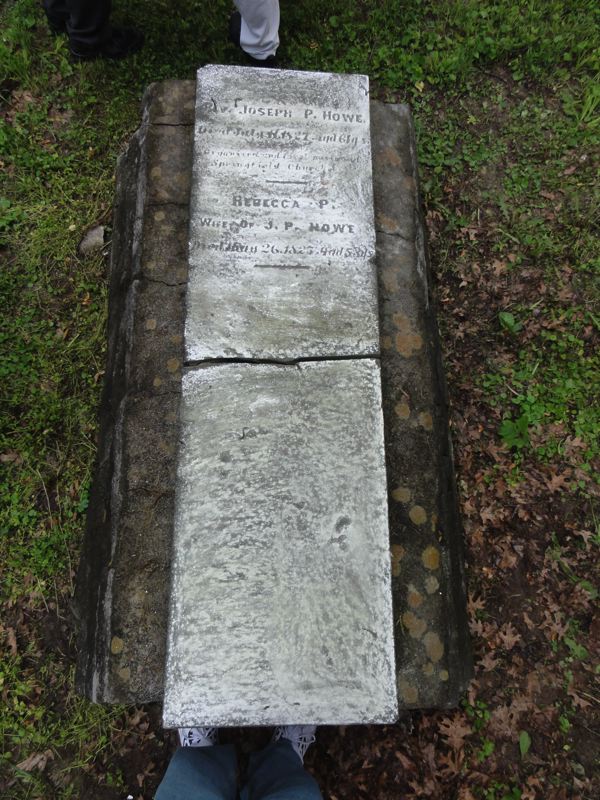 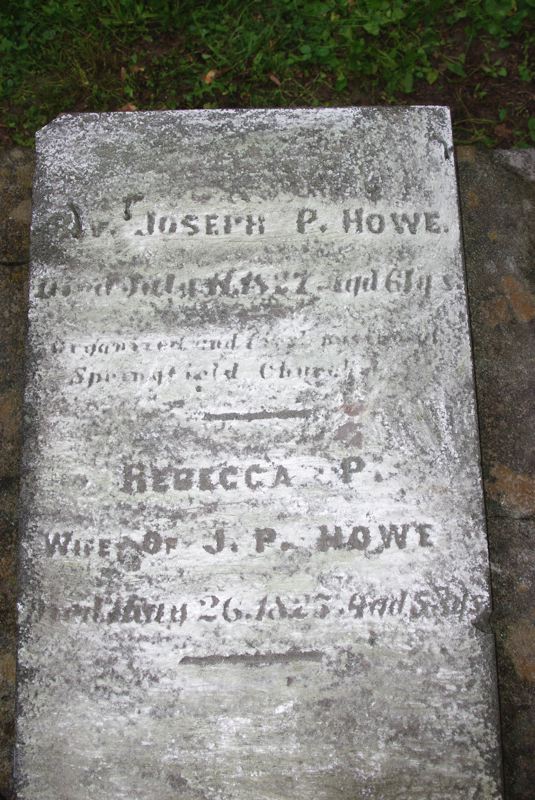 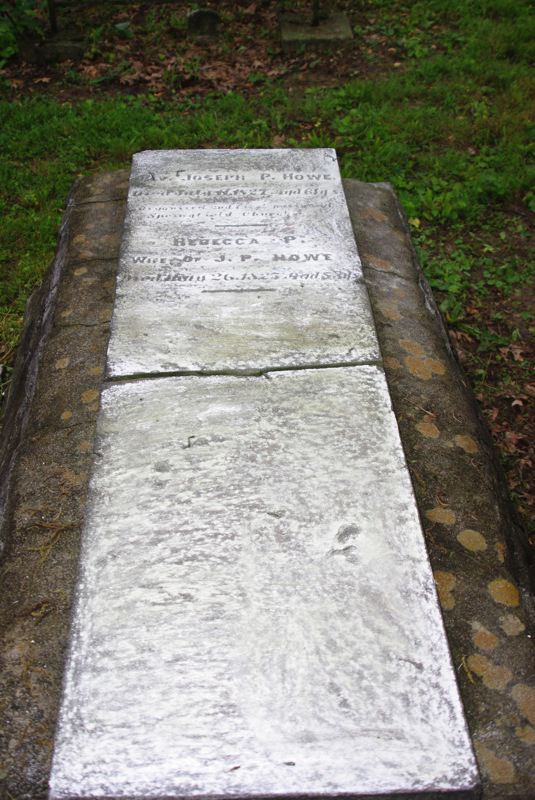 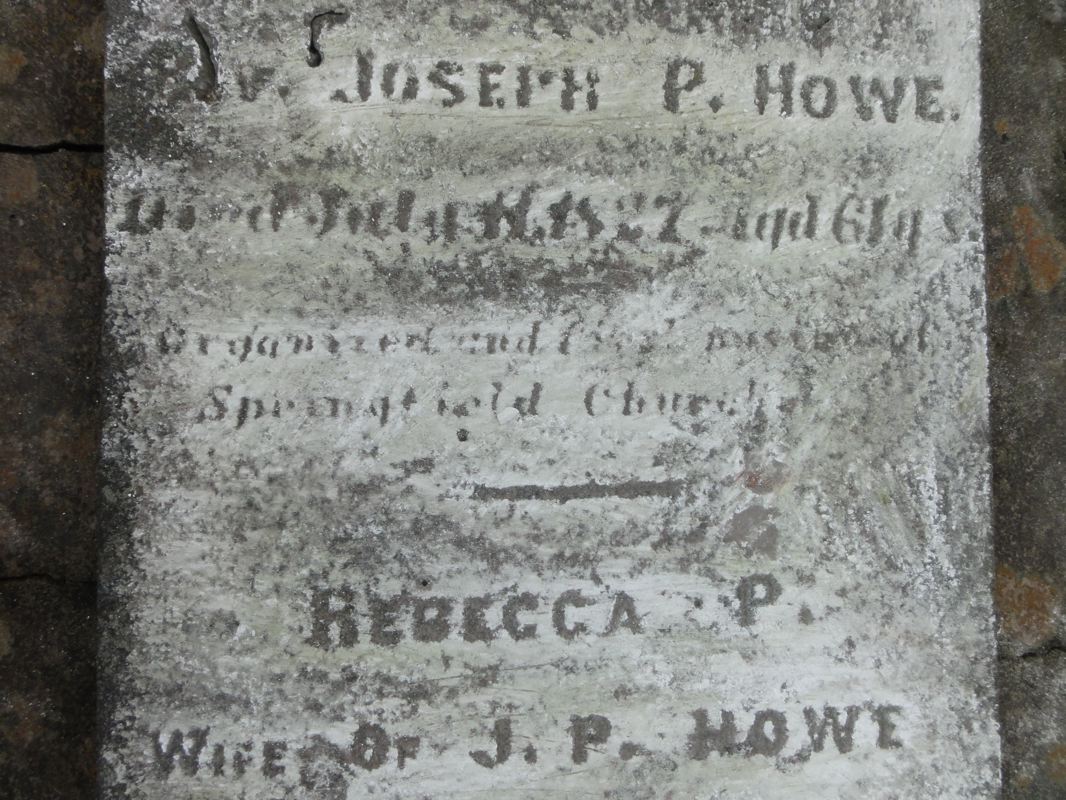 Special Thanks to Dan Murphy, minister of the Rolling Hills church of Christ in Mt. Sterling, Kentucky for assisting in the location of the grave of Joseph P. Howe and his wife Rebecca. Also to C. Wayne Kilpatrick and Tom L. Childers for assisting in taking the photos you see on this page.