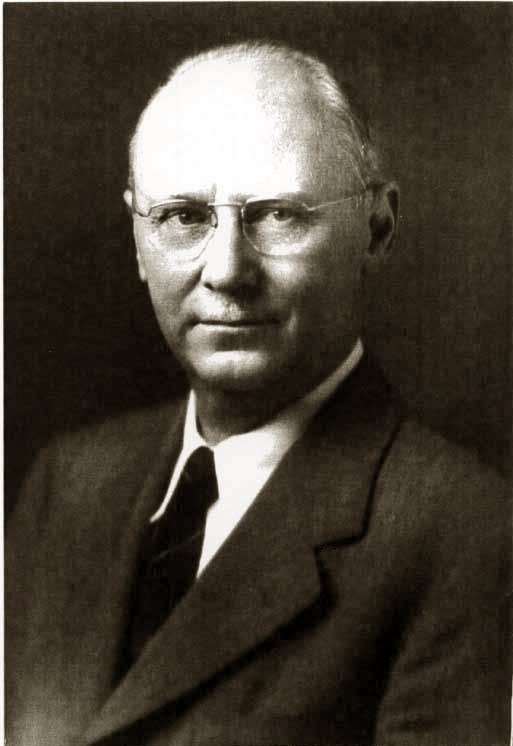 Gospel Preacher / Teacher of Music / Song Writer/ Editor of Word And Work Magazine
Leader In Restoration Churches In The Early to mid-20th Century
In Louisville, Kentucky

Great Songs of the Church

In May 1921, Elmer Leon Jorgenson published Great Songs of the Church. Jorgenson's hymnal reconnected our churches to the historic tradition of hymns and spiritual songs, especially the great hymns of the past.

What Jorgenson did for the hymnody of the churches of Christ was no accident. He carefully built on the ancient mainstream and on three sources within the Restoration Movement. First, the great psalms and hymns of the Campbell books were brought afresh to our churches. Many of these compositions had been laid aside, especially west of the Mississippi. Next, he took psalm paraphrases and gospel songs from J.H. Fillmore's New Christian Hymn and Tune Book.

The gospel song had established its place in Christian praise, and Jorgenson's discriminating taste helped him to use the best of both the Campbell and Fillmore material. He said of his inclusions, "[W]e know they will live because they have lived" (Foreword, 1921). Finally, Jorgenson was influenced by the work of the singer, musician and compiler William E.M. Hackleman. Trained at the Toronto Conservatory of Music, Hackleman published Gloria in Excelsis (1905) and Hymni Ecclesiae (1911). In these hymnals, Jorgenson found material for Great Songs and confirmation of his own musical standards.

Hackleman proposed seven standards for hymn selection: 1. literary excellence; 2. lyrical quality; 3. liturgical appropriateness; 4. reverence; 5. spiritual reality; 6. scripturalness; and 7. unity. Much of this language is found in the foreword of Great Songs: "The standards followed were truth and soundness, first of all, then strength and clearness, poetic beauty and lyric quality - the music wedded to the words and fit to wing them to the heart."

Most of the leaders, publishers and editors of the churches of Christ commended Jorgenson's hymnal. Only the Gospel Advocate was silent. This silence was caused by the controversy about premillennialism because Jorgenson held the premillenial view and was closely associated with Robert Henry Boll, former first-page editor of the Gospel Advocate. So the periodical was silent, but one of its former editors, now with another periodical, offered to replace a congregation's hymnals if the congregation would burn Great Songs after buying it.

In 1954, Jorgenson sold the round-note edition of Great Songs to Standard Publishing Company, representing the independent Christian churches. The result of these transactions was that for a decade and a half following, the heirs of the Restoration Movement again approached Campbell's dream of one hymnal for all churches, and a generation of church leaders and future leaders was introduced anew to the historic current of Christian song.

In the sixth decade of this century, Great Songs began to be imitated and copied by competing publishers. Photocopying began as early as 1956 and escalated after Abilene Christian University obtained the shaped-note book in 1957. In 1959, two competing hymnals contained 25 percent and 40 percent photographic reproductions from Great Songs. In 1965, another hymnal contained 50 percent reproductions, and in 1971 yet another had 40 percent reproductions. The latter even reproduced the editorial paraphernalia, that is the notes, asterisks and copyright information pertaining to only Great Songs, and got as close as possible to the copyrighted alphabetical arrangement.

In a telephone conversation with Jorgenson in the early 1960s, he informed me he had been in touch with one editor and told him, "I would gladly have allowed you to use any song in my hymnal, but I wish you had asked." The precedent of not asking was set, and it appears competing hymnal compilers assumed they could copy Great Songs with impunity. This copying of Great Songs is leading to its demise, and uno. less something changes it will soon be a thing of the past. Jorgenson's work, which has done much to elevate and standardize our hymnody than any other, is now in its death throes.

Great Songs Of The Church 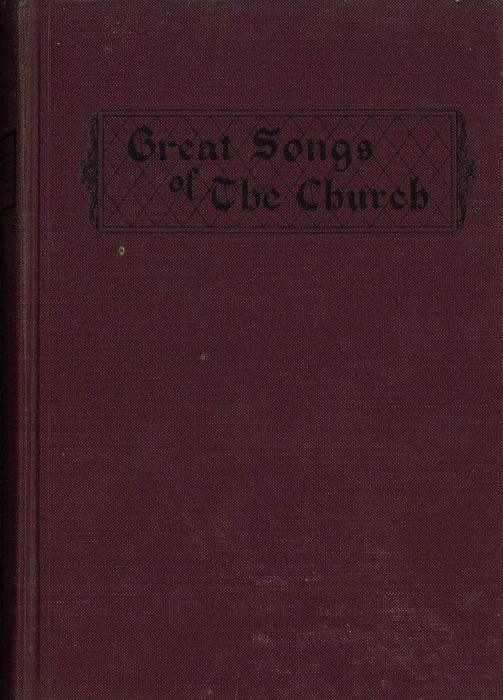 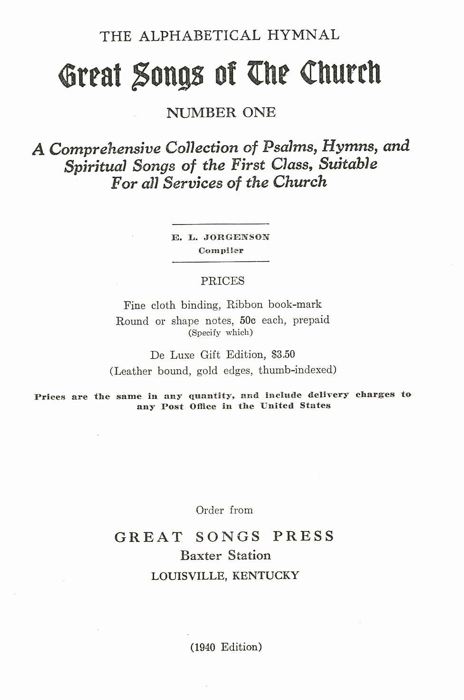 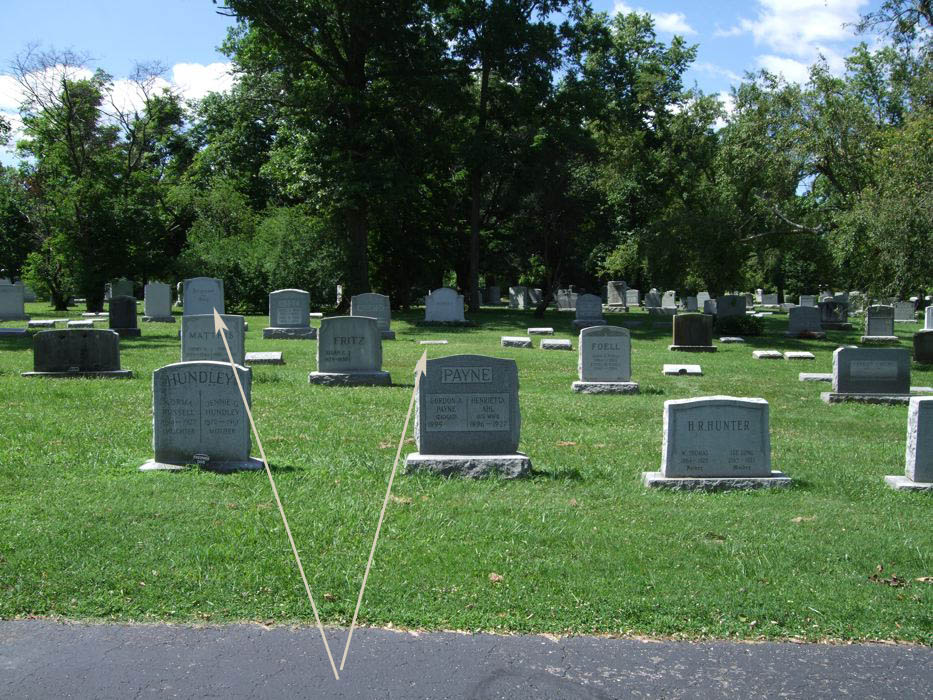 From Street - Arrow To Left To Grave Of E.L. Jorgenson - To Right Is Grave Of John T. Brown 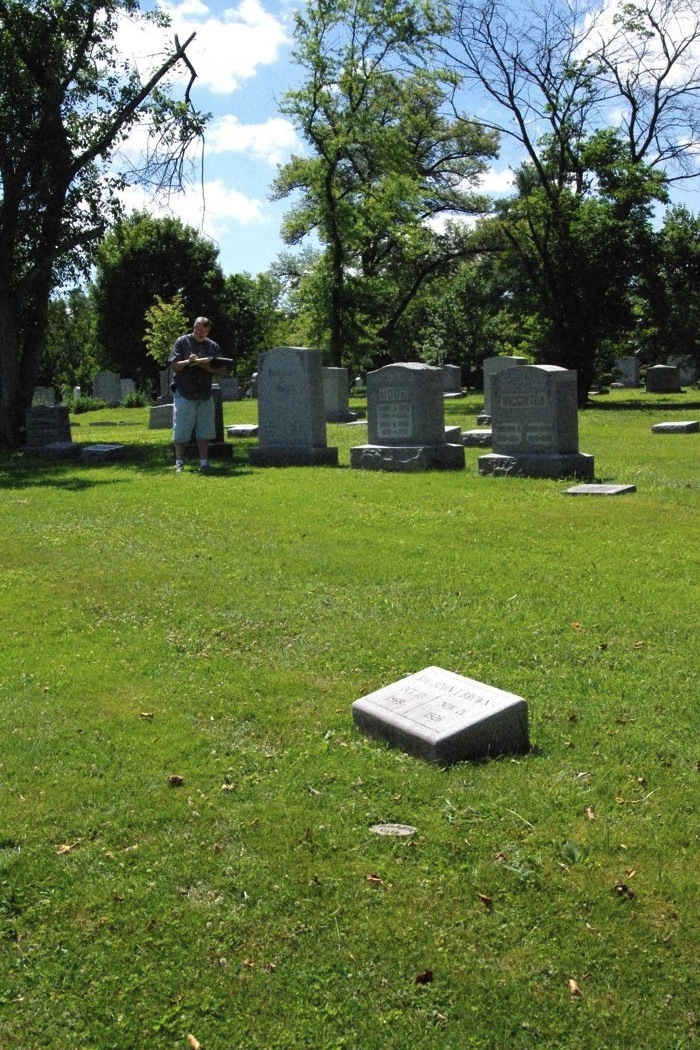 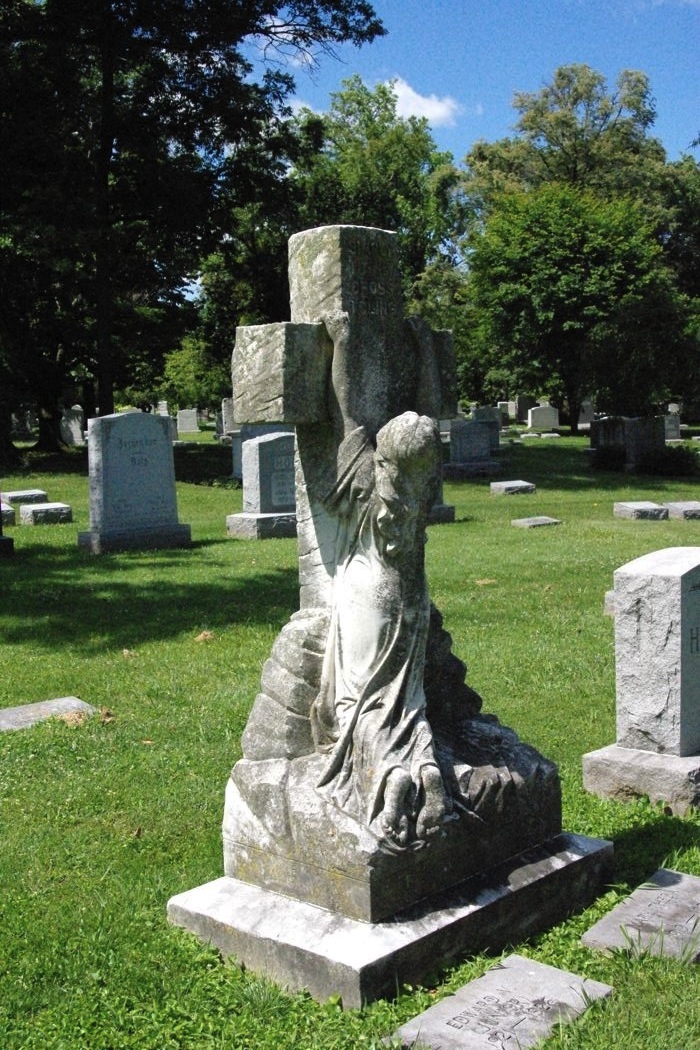 See Jorgenson Behind And To Left Of Cross 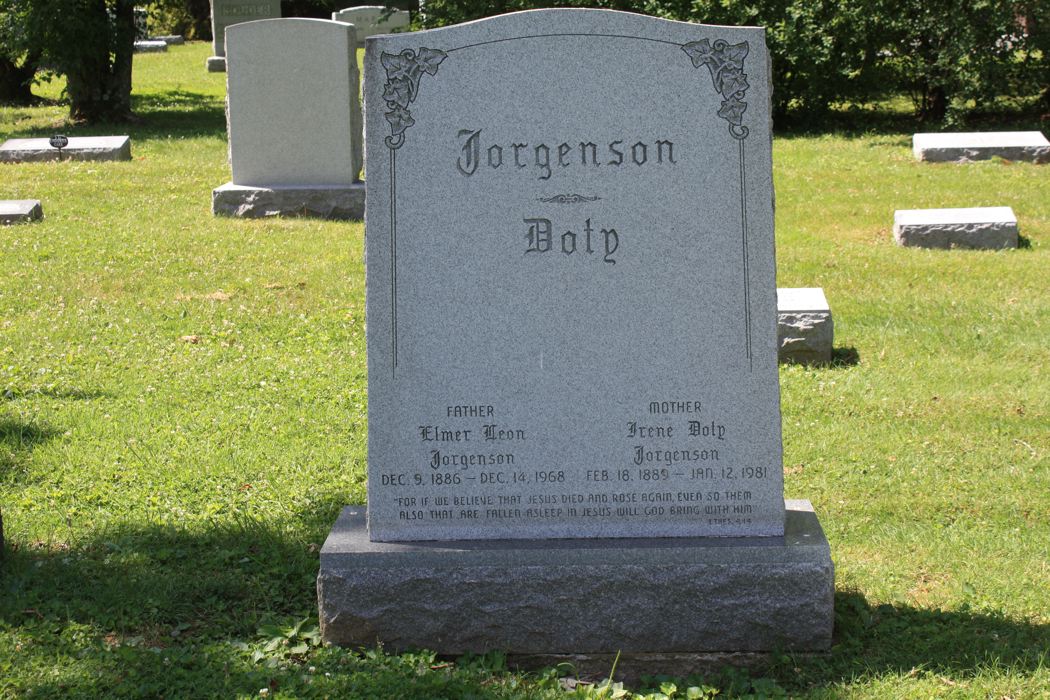 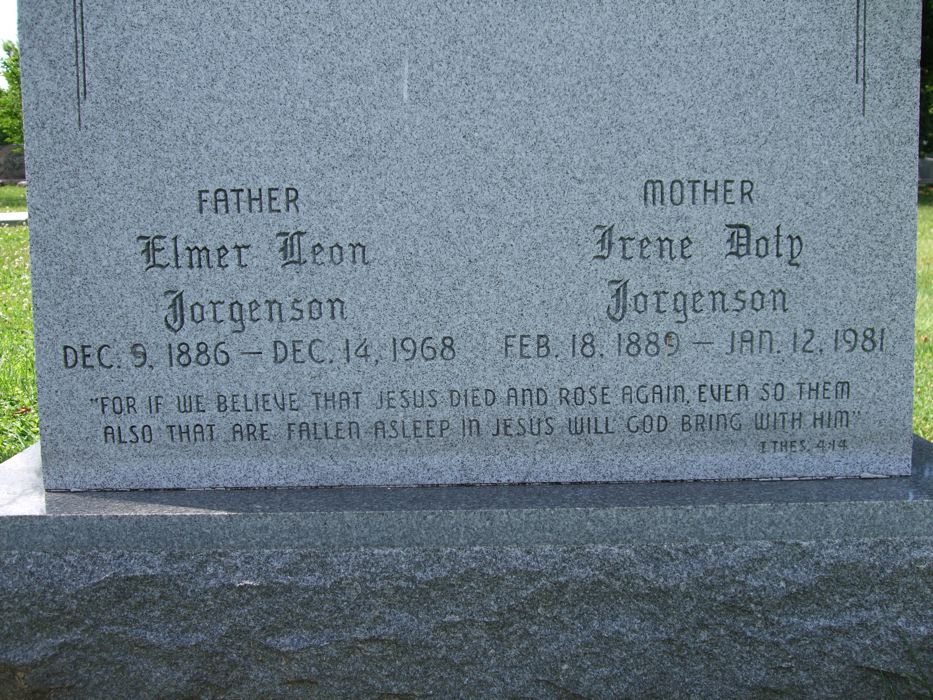 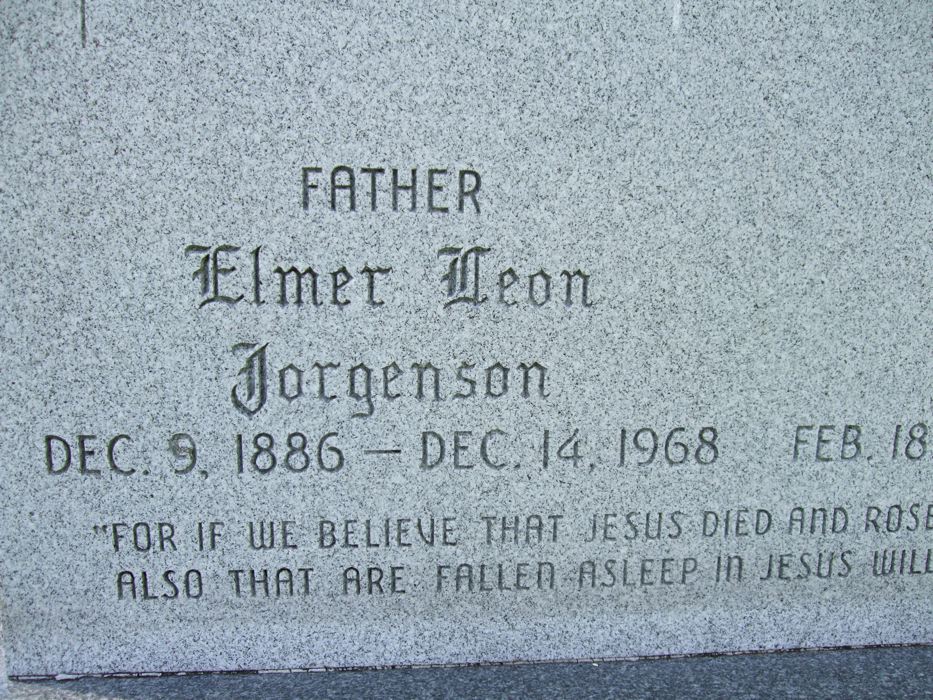 
Note: If visiting the grave of E.L Jorgenson, be sure to note that within 50 feet of the grave is the grave of John T. Brown, another preacher from the Louisville area.