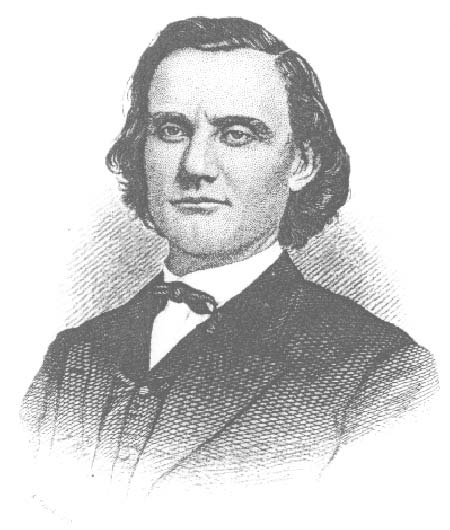 Mr. Sweeney came to Illinois in 1854, and began the practice of law at Greenfield. He made his home with Judge Short, a prominent member of the M. E. Church and a leading citizen of the community. One Saturday evening he invited Mr. Sweeney to go with him on the morrow to hear his minister review "Campbellism." That great gospel advocate had made a preaching tour through Illinois in 1853, and many of the orthodox pulpits were busy reviewing his teachings and protecting their flocks against the new "heresies." In his discourse, the M. E. preacher affirmed that Mr. Campbell had said that he ''could take the vilest sinner into the water and bring him out a saint." As was the custom, opportunity was given, before the close of the meeting, for any one to ask questions; whereupon, Mr. Sweeney arose and quietly asked where, in his writings, Mr. Campbell had ever made such a statement. The preacher, with a glowering look, replied: "Have you come here to break up my meeting?" Judge Short instantly replied: "No, Bro. Powell; it is a fair question and one that I also would like to have answered." The preacher promised to produce it at another time, and thus the incident closed. Immediately upon the dismission of the congregation, the few Disciples present came to Mr. Sweeney, and, learning from him that he was of their faith and order," insisted that he answer the discourse which they had just heard. He declined, but thus it was that he was turned from the practice of the law to the preaching of the gospel. He was a faithful student of the Scriptures and a man of fine discrimination, and in him the logical faculty was united with a keen sense of humor. In the first year of his ministry, five hundred people became obedient to the faith under his preaching. Riding along one day, he fell in with a company of people assembled at the usual place for baptizing, on the bank of Apple Creek. The Baptist minister, a Mr. Johnson, was assuring the people that the converts to be then immersed had all "been born again," and had all received the assurance of the forgiveness of their sins at the ''mourners' bench," for which he thanked God. Permission being granted, Mr. Sweeney said: "I would like to ask if Baptist converts are all 'born of water on dry land?" Mr. Johnson replied: "Sir, you are a Campbellite, and desire to disturb our meeting."


A meeting of the ministers was convened in Springfield in the later fifties with the purpose of "disciplining" one of their number. This action Air. Sweeney earnestly opposed, contending that it was contrary to the congregational independence of the New Testament, and as forming a possible precedent that would result in evil. In such cases, the preacher is responsible to the local church in which he holds membership.

Probably the most eminent service ever rendered the Disciples in Illinois by Mr. Sweeney was in his course toward the Russell defection. Walter Scott Russell was a graduate of Bethany College. Shortly thereafter, he became an extreme and pronounced mystic. Associated with him were some of our leading preachers in the State, who became open advocates of this doctrine. Among these were T. J. Melish; Frank Apperson, a brilliant young Englishman; F. N. Carman, publisher of the Christian Sentinel, the only paper of the Disciples in the State at that time, which indorsed the articles and addresses of Mr. Russell; W. W. Happy, an able and veteran preacher, who was then president of the State Missionary Society, while vSamuel Callaway was its treasurer, and Prof. P. Lucas, of Berean, was its secretary. All of these men were in full accord with the views of Mr. Russell. These men thought to reform the Restoration movement on the basis of this inner-light theory. The State Missionary Convention met in Bloomington, September, 1858. The new doctrine was uppermost in the minds of all.

It was the general feeling that a real crisis was at hand. On the evening of the second day of the meeting, Mr. Sweeney was to preach. Not one person knew anything of his attitude toward the new teaching. Intense anxiety pervaded the great assembly of the saints. Air. Sweeney chose for his text, John 16:13, 14, and unfolded it into a most masterful sermon. It was a pivotal discourse that was to make or unmake myriads, and he rose fully to the occasion. The peculiar teachings of Mr. Russell were clearly shown to be contrary to the Scriptures and enlightened human reason. This was the beginning of its end. The new movement was put upon a course of rapid and ultimate extinction. Mr. Russell died. Professor Lucas went to the law; Messrs. Carman, Callaway and Happy to the Baptists, but later the last named returned to the Disciples. Mr. MeHsh went to the Baptists and later to the Episcopalians. Berean College went to ruin. And in later years the breach in the Jacksonville Church was wholly healed.

Mr. Sweeney was a participant in about seventy-five public discussions, generally against his inclination.

The subject of this sketch was born near Liberty, Kentucky, September 4, 1832. His father, G.E. Sweeney, was of Irish descent, and a Baptist in his younger days, but, "when he became a man, he put away childish things" and has since been an earnest advocate for the primitive order of things. His mother, whose maiden name was Campbell, was of Scotch-Irish extraction, and was brought up under Methodist influence, but, for more than thirty years, has been a member of the Christian Church. 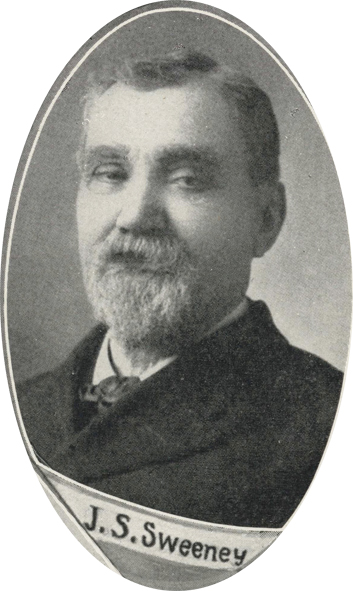 His parents were poor, and lived in a country not very well supplied with good schools; consequently, his early education was greatly neglected. After he was fully grown, however, he acquired a respectable education.

Having begun the study of the law, he left Kentucky, in 1854, and went to Illinois, where he continued to prepare himself for his chosen profession, and, just as the most flattering prospects were opening up to him as a lawyer, he became convinced that it was his duty to preach the Gospel. Acting under this conviction, in 1856, he entered actively upon the work of the ministry, and has been constantly engaged in this calling ever since. His labors have been chiefly confined to Illinois, though he has preached considerable in Missouri, Iowa, Wisconsin, Indiana, Ohio, and Kentucky. During this time, he was located two years in Chicago, and a little over one, in Cincinnati. Most of his labor has been in the general field, and his success there has been all that could be desired, having received into the Church, by immersion, about two thousand two hundred persons.

With Methodists, Baptists, Presbyterians, Universalists, and Soul-sleepers, he has held twenty-five public discussions, two or three of which have been published. For one so young, this is a rather pugnacious record; but when the fact is stated that he has declined equally as many discussions as accepted, and that he never challenged nor sought debate but once in his life, we may be inclined to alter our opinion somewhat. He is not afraid of discussion, but does not seek it. He thinks that honest investigation is the most certain way to elicit truth; hence, he has generally accepted all fair propositions that would be of public interest. His debates have always been largely attended, and have never failed to gain new trophies for the cause of Christ. His home at present is at Winchester, Illinois.

Brother Sweeney has, in some respects, a peculiar mind. He can not be called a hard student of books; in fact, if you were with him awhile, you would think he never studies them at all. And yet his brain is never idle. He does not read much, but he thinks. He is forever working at some problem in theological polemics, or arranging Davis and arguments for use in preaching the Gospel; hence, his sermons abound in apt and forcible illustrations. His style of preaching is well adapted to the masses. Every argument is brought out with the utmost clearness, and, however we may be disposed to differ from him, there is never any excuse for misunderstanding him.

While his mind is eminently logical, he has, nevertheless, fine descriptive powers, and is capable of producing superior word paintings. He has seen much of the world, not that he has traveled so extensively--though he has traveled considerable--but he has actually experienced about what is the aggregate of human life, and this experience enables him to form very correct judgments of men and things.

He is six feet high, has dark hair, light hazel eyes, and weighs about one hundred and seventy pounds. He has, naturally, a powerful physical constitution, though it is somewhat impaired by ill-usage. He is social and fraternal in his intercourse with men, but somewhat reticent as to his plans of life.

The Sweeneys are buried in the cemetery at Paris, Kentucky. Heading northeast out of Lexington on the Paris Pike. (Hwy.27/68). As you enter from the south end of town, look for a white wall on the left that looks like the front of a castle. This is the entrance into the cemetery. Enter the cemetery past the offices and stay to the right. The road will dead end (no pun intended!). Turn to the right, and right back to the left. Then proceed toward the rear of the cemetery counting to the third left turn. Just before the third left turn, stop the car. Up on the rise to the left is the Sweeney plot. At least three generations of Sweeneys are buried there. G.E. & Talitha Campbell Sweeney, his parents, of course, J.S. Sweeney, and also four of J.S.'s children, two of which were preachers, E.S. Sweeney, and W.E. Sweeney. 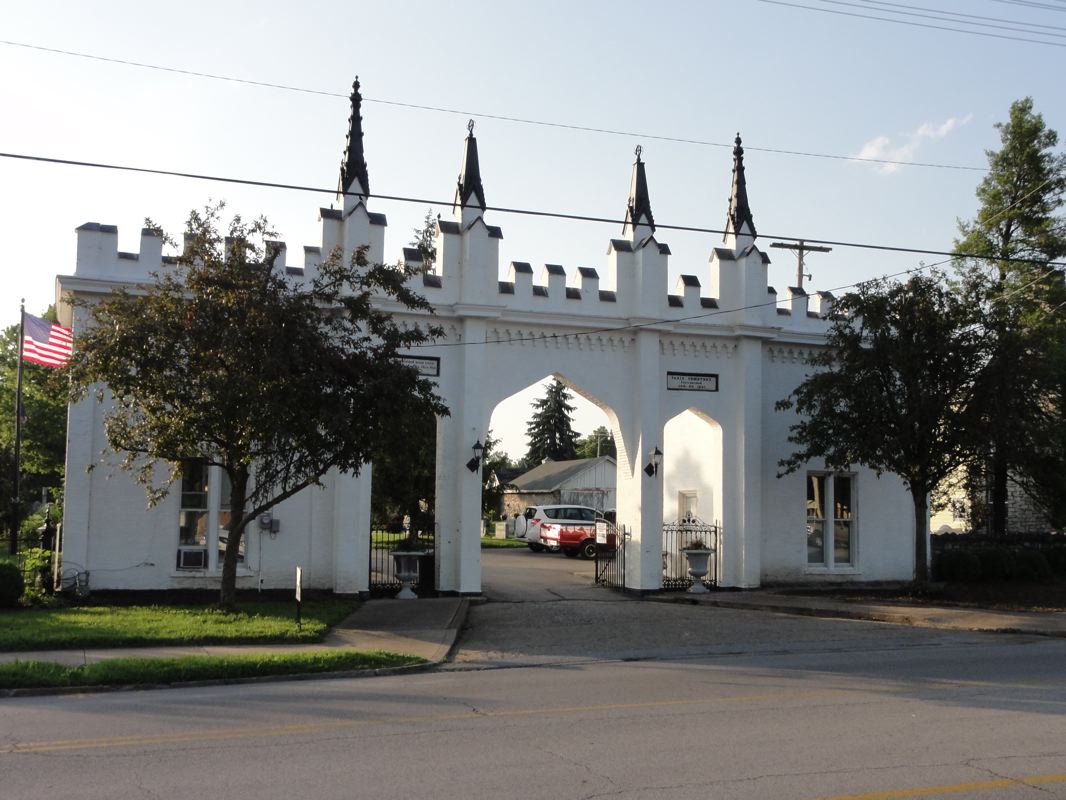 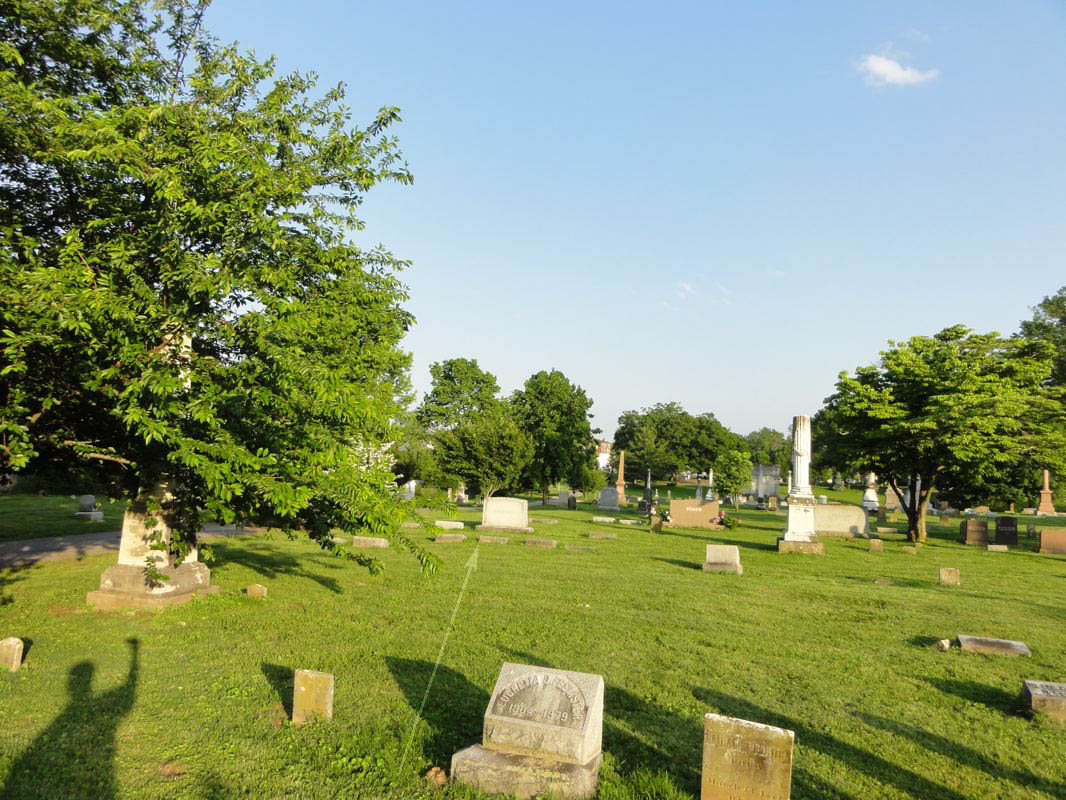 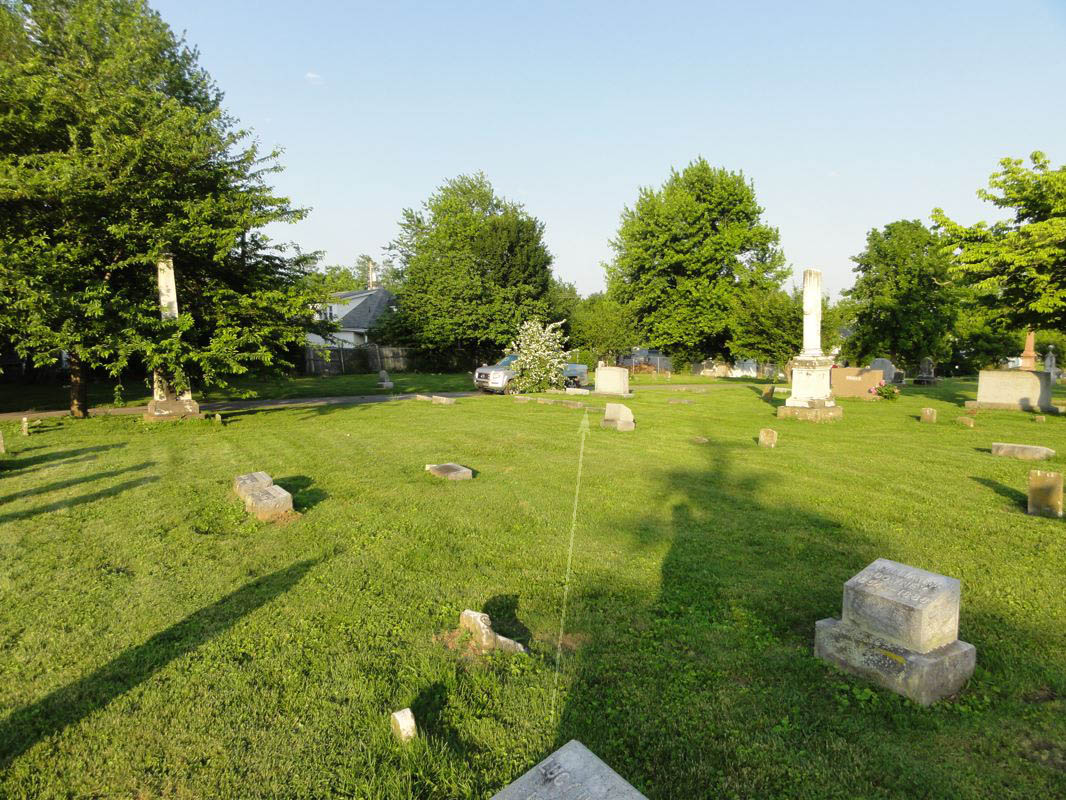 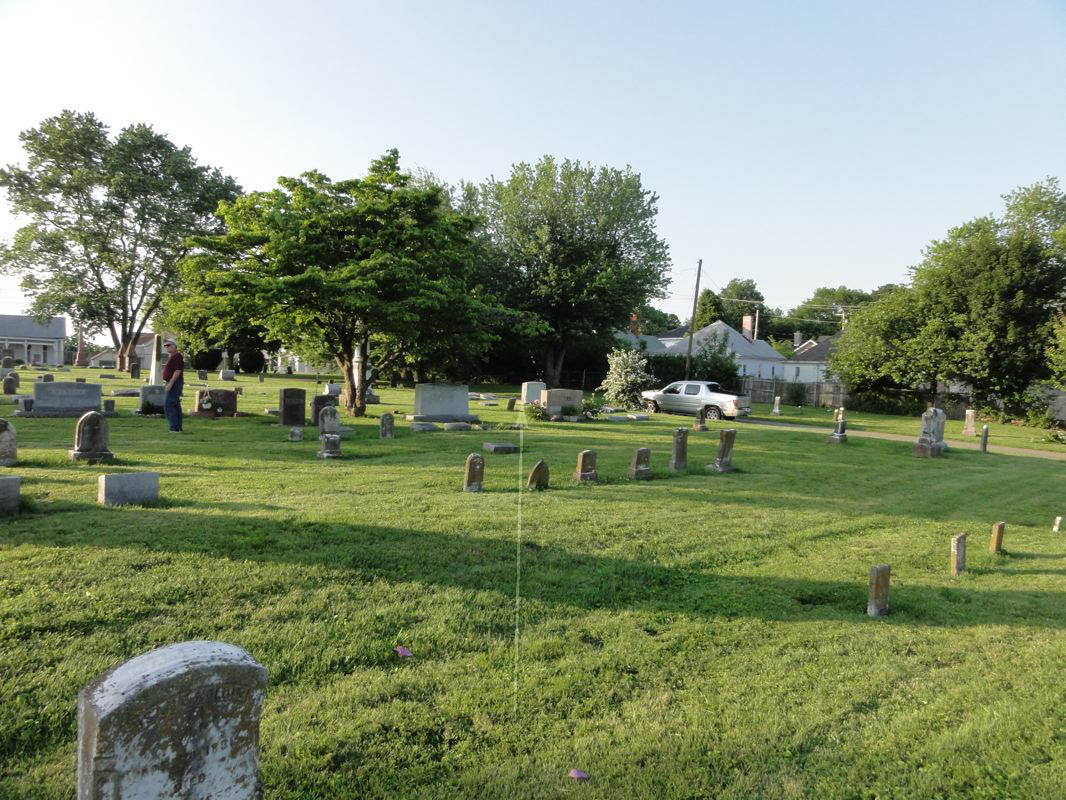 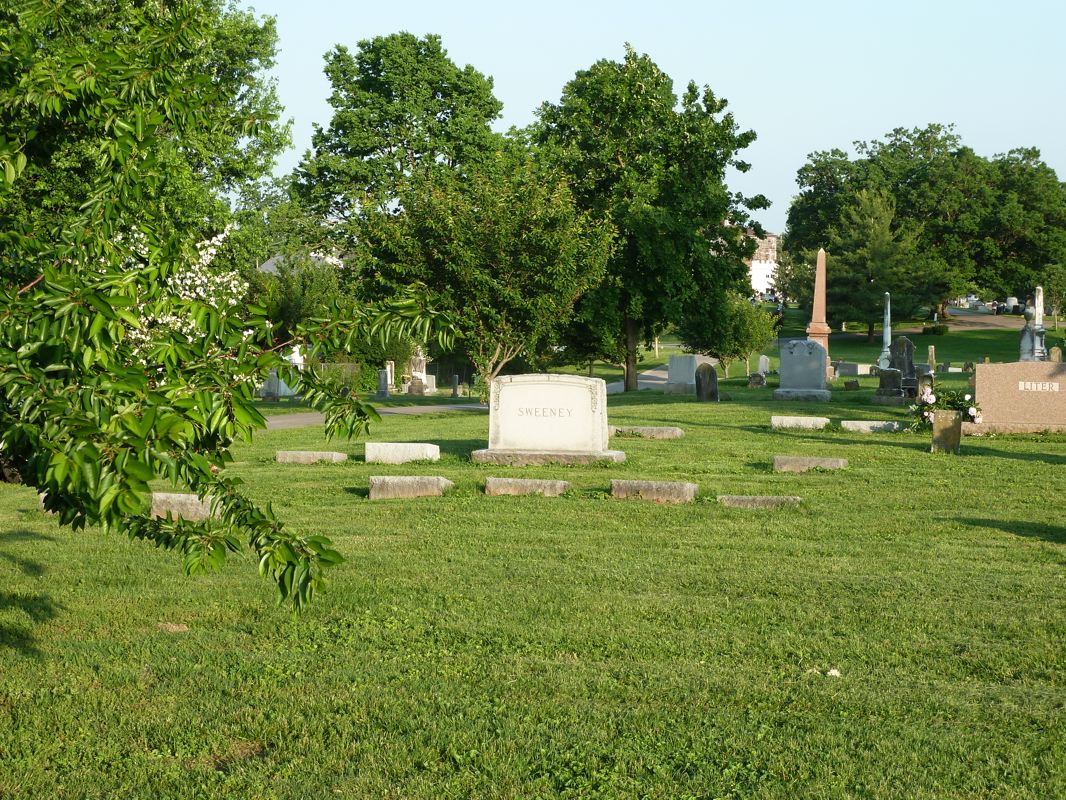 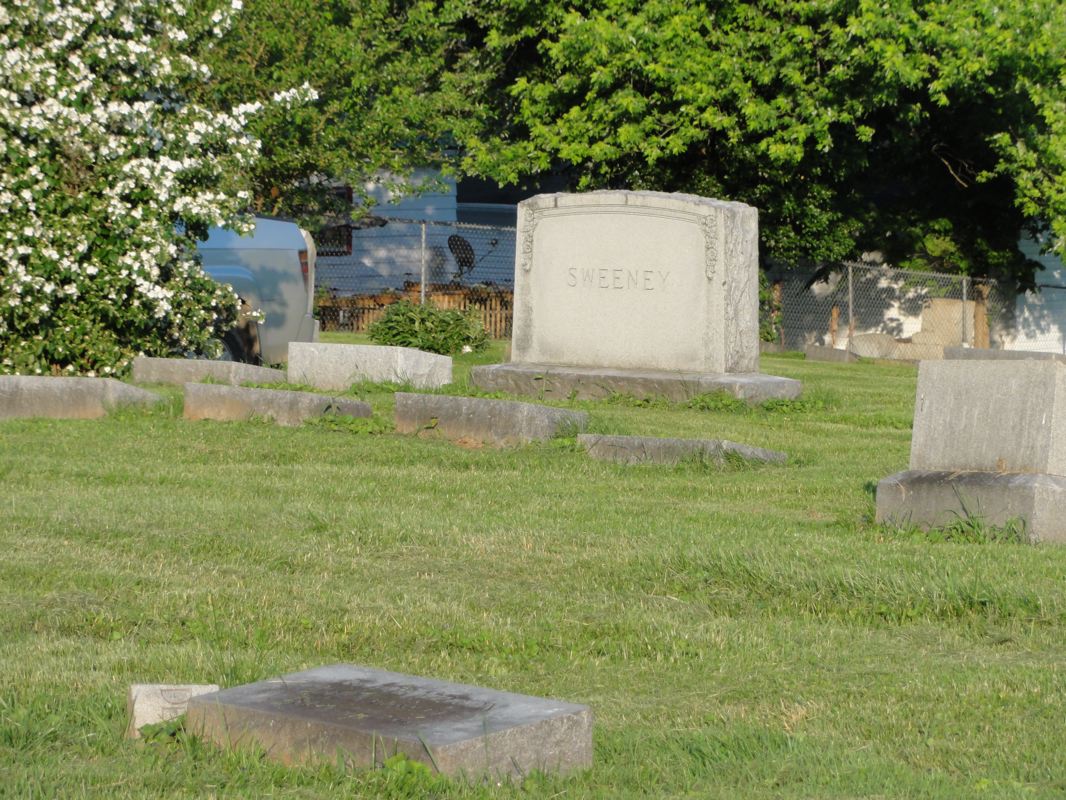 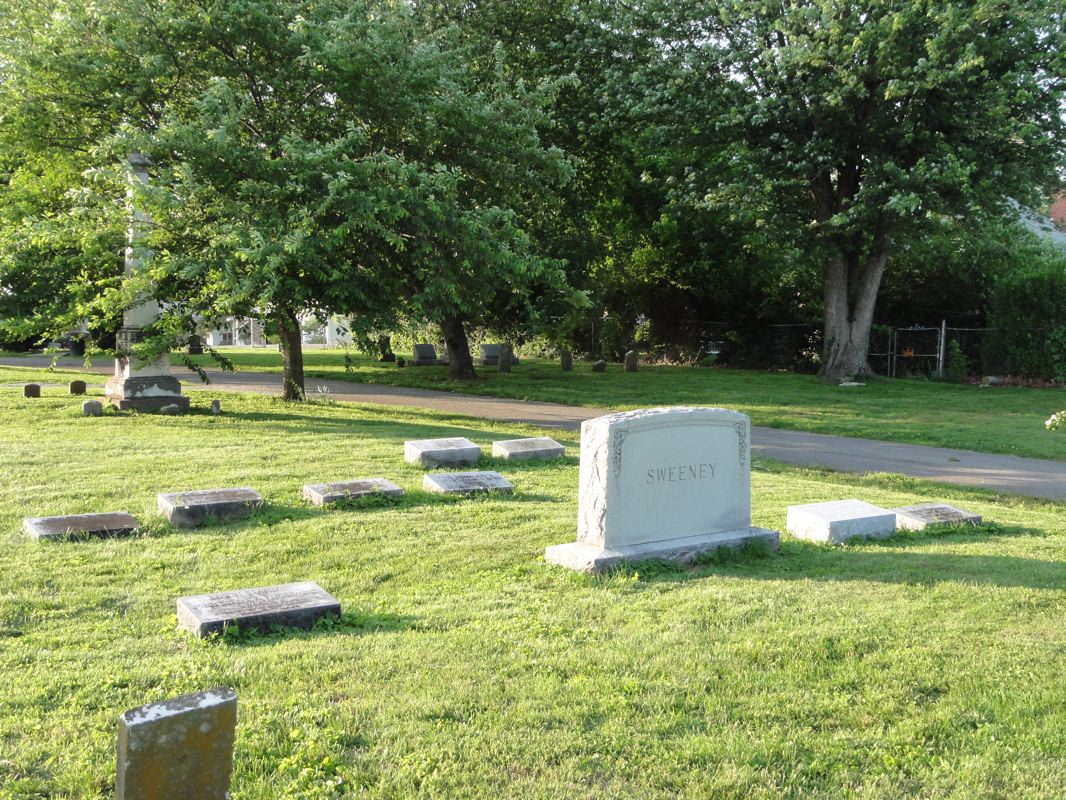 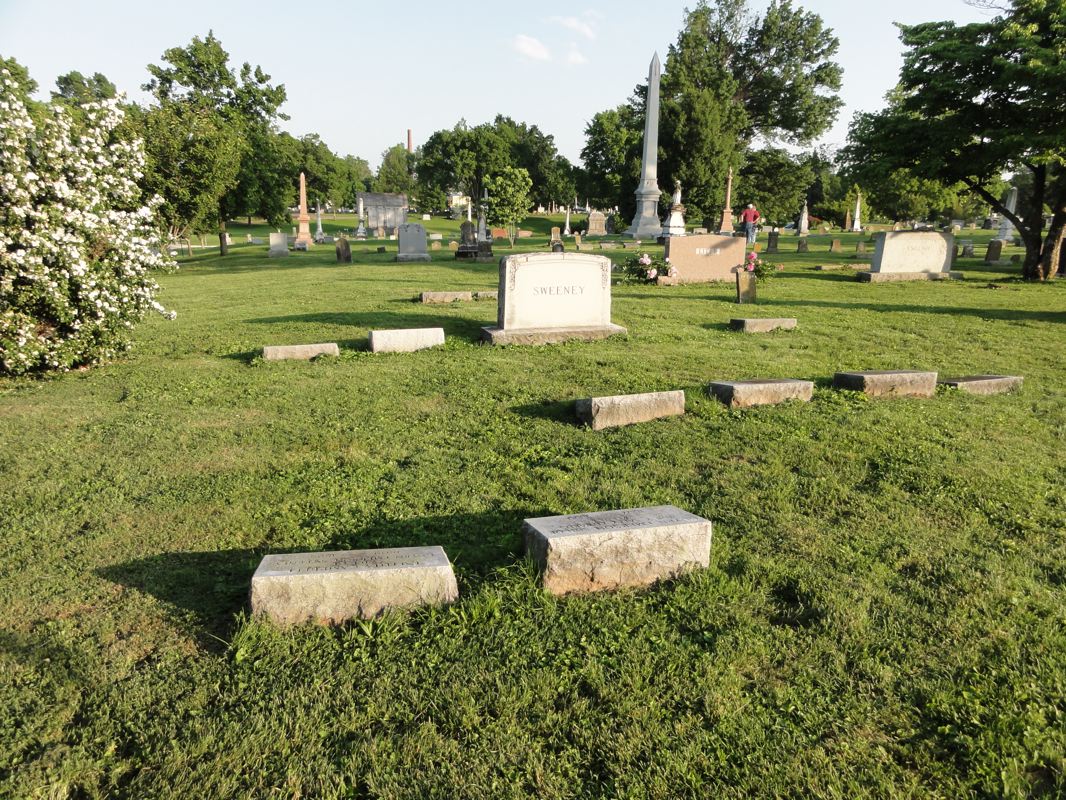 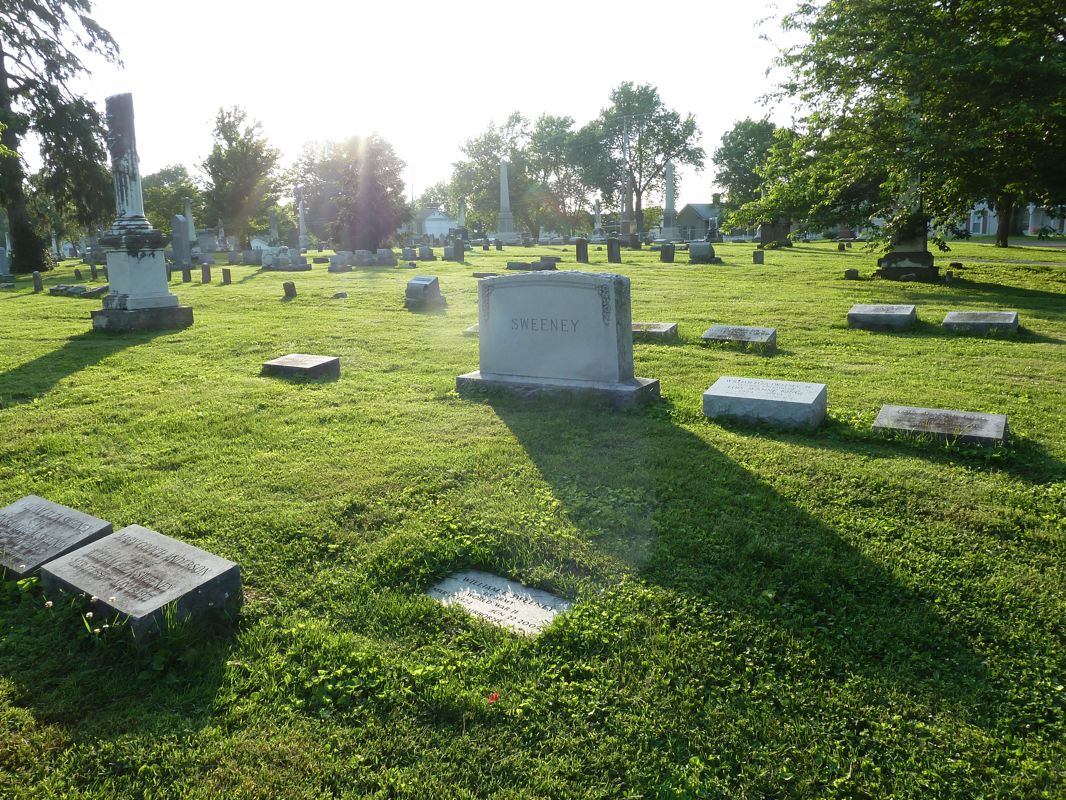 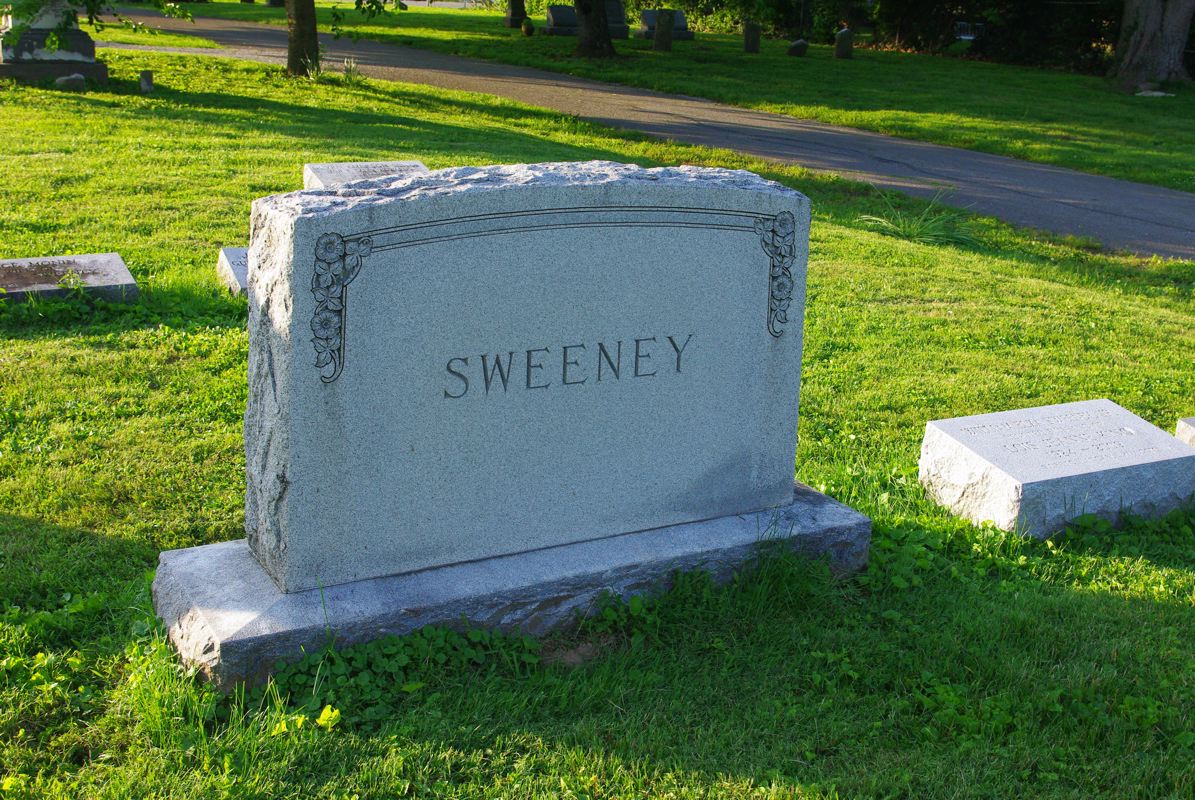 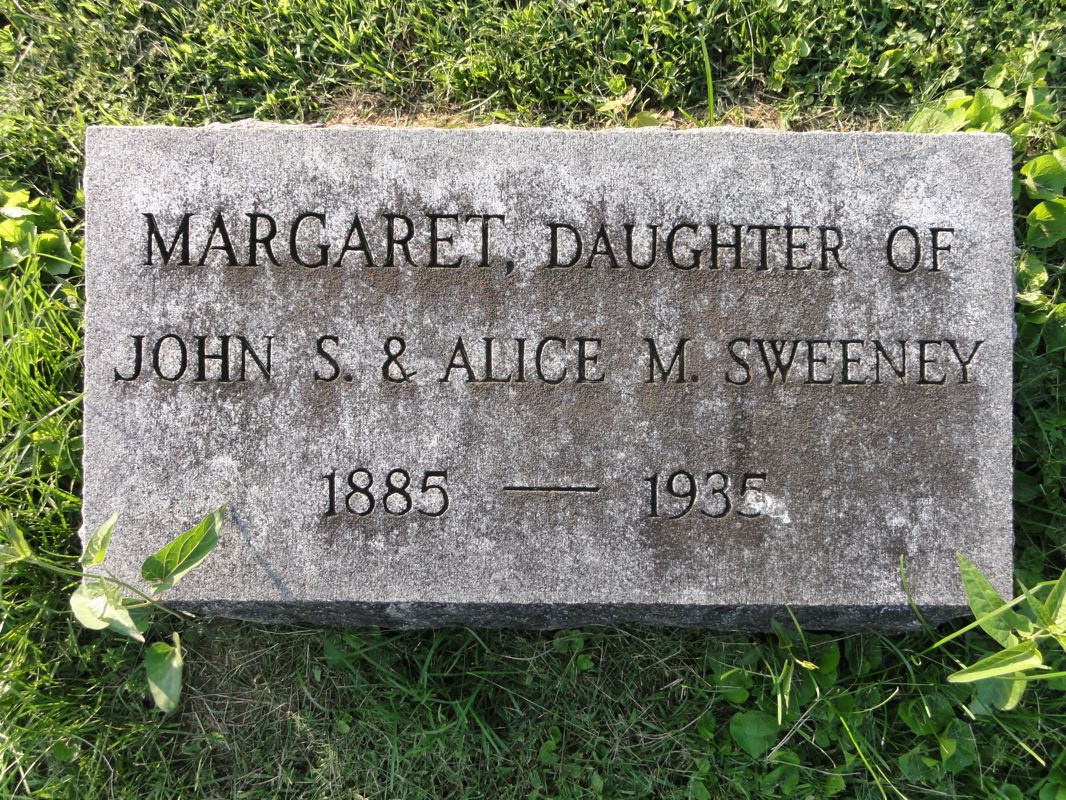 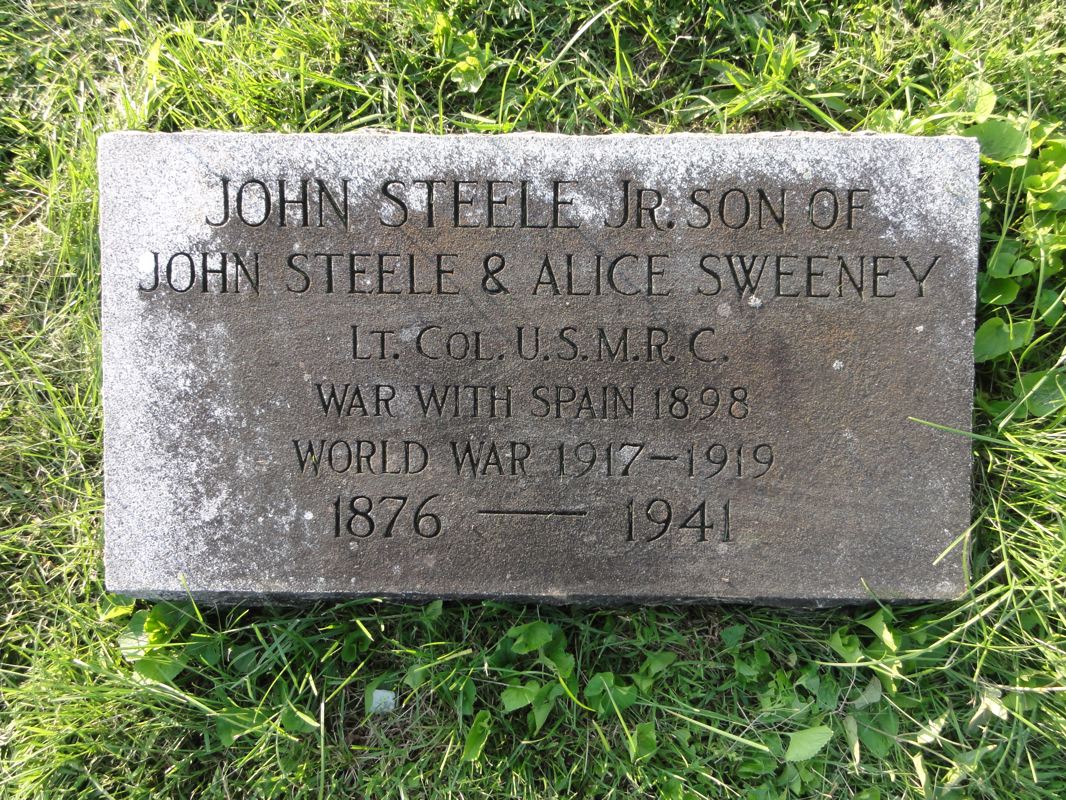 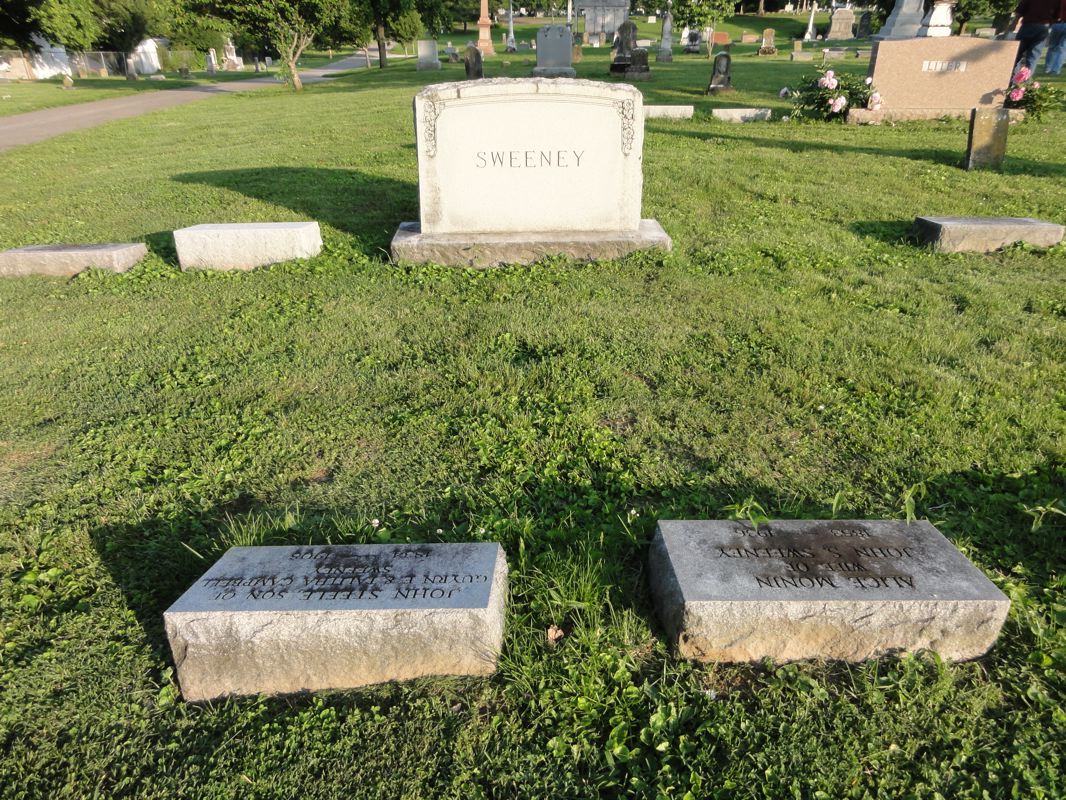 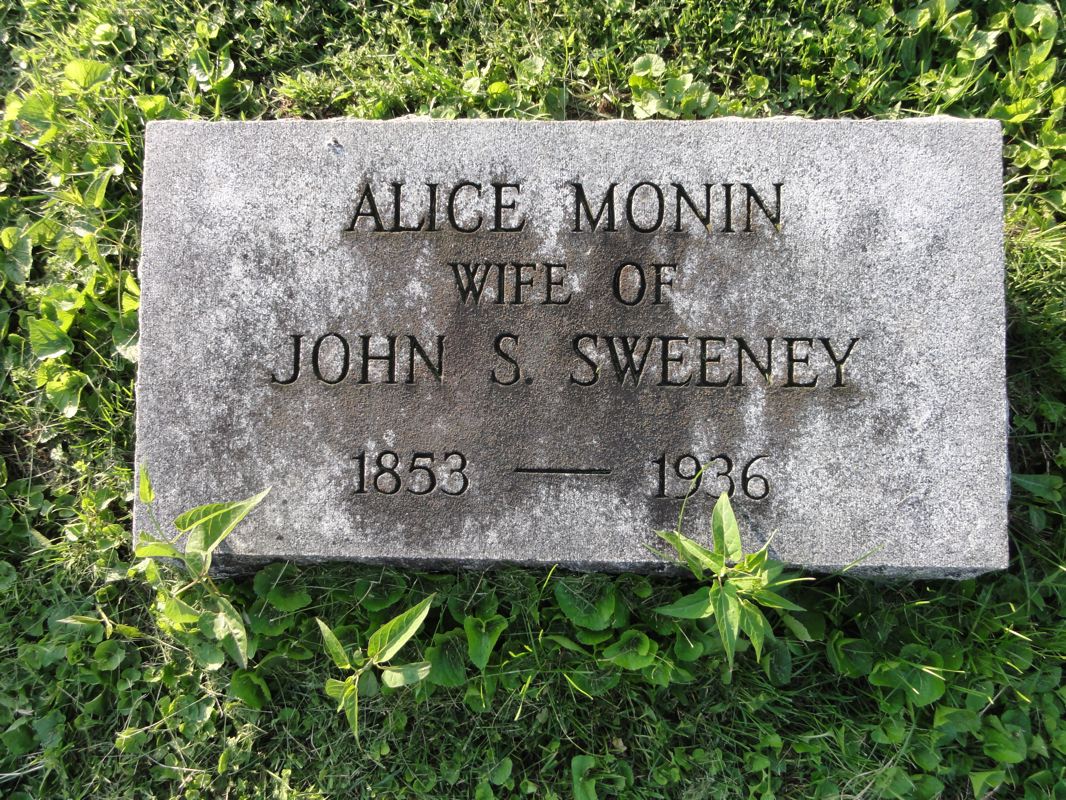