The life of Emily Thomas Tubman (1794-1885) reads like a fairy tale. How could a beautiful southern belle in a time when women had no vote and limited rights become administrator of a large Georgia plantation and later an even greater financial empire? Why would a woman of such wealth make it her life's vocation to invest her resources carefully in a wide range of educational, churchly and community projects?

Emily Tubman crashed the modern "glass ceiling" by doing the impossible and the unconventional! Members of the Christian Church (Disciples of Christ) should give closer attention to one of Discipledom's "super women." The state of Georgia recognized her greatness by inducting her into the Georgia Women's Hall of Achievement in 1994. A statue of her was placed in downtown Augusta.

After seventeen years of a happy and fulfilling marriage to Richard Tubman of Augusta, Georgia, Emily at age 42 found herself responsible for her husband's vast holdings. It was unthinkable in 1836 that a woman be named executor of her husband's estate, but that is what happened. What could a frail and fragile social butterfly do in the rough and tumble world of business?

Richard Tubman died in his wife's arms as they traveled from Augusta to Frankfort, Kentucky. He had been in ill health before they began their annual journey of three weeks by horse and carriage to her family in Kentucky. Emily showed her grit and courage as she buried him beside the road and traveled on to Frankfort. (Later she would inter his body in the St. Paul's Episcopal Church in Augusta.)

Emily had promised Richard in his dying moments to do two things: free their slaves and to continue their custom of traveling each summer in Kentucky to avoid the yellow fever plague that was always an imminent threat in the hot humid summers of Augusta. The first task at hand was to learn how to administer the land holdings and business interests of her late husband. She turned to her brother, Landon Thomas, an attorney and a graduate of Yale, to teach her the rudiments of business and law. No one could deny that this remarkable woman was on a quick learning curve. She proved the meaning of being a good steward of that which is entrusted to one. Despite the calamities that beset her world, she would more than double her inheritance. She would enlarge the Tubman plantation and other landholdings, as well as build a textile mill and become a major stockholder in a railroad and several banks.

How could one emancipate one's slaves in pre-Civil War Georgia? The debate of slavery was now divisive. She applied to the Georgia legislature but to no avail. Even a gift of $10,000 for the University of Georgia did not soften attitudes. Emily by then had become accustomed to doing the impossible. She wrote to her friend and mentor Henry Clay for advice. Clay just happened to be president of the American Colonization Society, which was created to find suitable places in Africa where ex-slaves might safely prosper. Mrs. Tubman made a special trip to Washington to talk with Clay and other officials of the several colonization societies. She wanted to be satisfied that colonization was suitable for those entrusted to her care.

She returned to Georgia and called her slaves together and offered them two choices. She would pay for their passage to Liberia or they could remain with her. If they remained they would be set up on individual parcels of land and paid wages for farming. We are told that 68 voted to go to Liberia and start a new life there. One of the ex-slaves became homesick. Mrs. Tubman paid for his return passage and met him in Baltimore and accompanied him back to Augusta. An interesting footnote is that one of the descendants of this Liberian group became president of that nation in the 1970s.

Emily Tubman's religious journey gives insight to her strong will. It also shows her impatience with doctrines that divide. The famous Kentucky Baptist preacher, Silas Noel, baptized her. She took her baptismal certificate with her to Augusta, but never joined either the Baptist or the Episcopal Church to which her belonged, although she was a regular in attendance. This was true until she had the opportunity to meet and entertain Alexander Campbell. She was impressed with his insights and vision of a New Testament church. She became a student of the Stone-Campbell heritage but not a blind follower. She read the Millennial Harbinger and was a serious Bible student.

A new chapter began in her life as she became a charter member of the First Christian Church of Augusta and a summer member of First Christian, Frankfort. Now she had the vision for how she could make a difference for Christ and his Church. Emily Tubman had become a stewardess. She would provide funds for building scores of Christian Churches throughout Georgia, including those in Augusta, Atlanta, Athens, Savannah and Sandersville. She not only paid for buildings, but also for the pastor's salary as these new churches were planted.

The Frankfort church in Kentucky was destroyed by fire in 1872. She helped a dejected congregation gain new life. She paid for the building and furnishings of the building that is still in use.

Emily knew that the Disciple movement, to grow and prosper needed an educated ministry. To make this possible, she gave generously to the building and endowing of Christian colleges, including Bethany, Hiram and Midway. George Darsie, her friend and beloved pastor at Frankfort, helped her gain a vision of world missions. She made just before her death the largest gift that the Foreign Christian Missionary Society had ever received in the amount of $30,000.

Mrs. Tubman cared about her community as well. She continued the benevolent work of her husband and she also founded a public high school for girls. It is now the Tubman Middle School in Augusta. She built low cost housing for the soldiers' widows that were destitute following the Civil War. During that war she saw the suffering of the wounded that were housed at St. Paul's Episcopal Church. At her own expense she purchased the first ice-making machine in the state of Georgia and had it brought by one of the blockade-running ships to Augusta. The defeated Confederate soldiers were able to ride her train free as they traveled home to begin a new life.

We salute one who opened doors of opportunity for many who would come after her. We praise one who learned the joy of giving. Emily Tubman made a difference!

by Donald A. Nunnelly

Directions To The Grave And Brief Sketch Of Emily Tubman

Mrs. Tubman was buried in her summer hometown of Frankfort, Kentucky in the beautiful Frankfort Cemetery. Traveling from the entrance of Frankfort Cemetery heading in the direction of Daniel Boone's grave, you will make a sharp right turn on the way. As you are about to make the right, there, just back to the left, is the beautiful pink obelisk which marks the plot of the Tubman family. This wealthy southern woman was the benefactor of many brethren in need. Emily Harvey Thomas grew up in Frankfort, Kentucky. Her father, Edmund Pendleton Thomas was the first land registrar of the state, and their house was located in downtown Frankfort. When her father died, Henry Clay was listed as her guardian. She moved to Augusta, Georgia in 1818. She married Richard C. Tubman, and lived between Augusta and Frankfort, Kentucky for some years. She was baptized in the Kentucky River in 1828 by Silas M. Noel, a staunch Baptist minister, and bitter foe of the Christian movement. However she never worshipped as a Baptist. She joined herself to the disciples in Frankfort under the influence of Philip S. Fall and others. 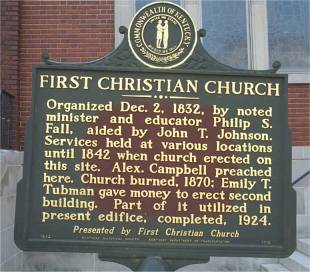 Her winter home was in Augusta, Georgia where she helped nurture the church, along with Dr. Daniel Hook for over 20 years, beginning in the late 1830's. J.S. Lamar, in John T. Brown's book Churches of Christ, said she was, "a woman whom Georgia disciples revere still as their sainted mother and bountiful benefactress, and whose memory is forever embalmed in their grateful hearts." (p.215) The people of Augusta, Georgia greatly loved Mrs. Tubman, as they, on March 21, 1994, dedicated a monument on Green Street in Augusta, to her memory. (See Picture Below)

She was also greatly beloved in Kentucky. She helped build the First Christian Church in Frankfort, Kentucky after it burned in 1870. She helped finance many great works, making contributions to Bethany College, and other Schools of learning. Without the aid of Emily Thomas Tubman the works of many would have faded into oblivion. Tubman is buried in Section B in the Frankfort Cemetery. See Map

Dedicated March 21, 1994
Commemorating The 200th Anniversary Of The Birth Of
Emily Harvie Thomas Tubman
Sponsored By The State Of Georgia
Zell Miller, Governor 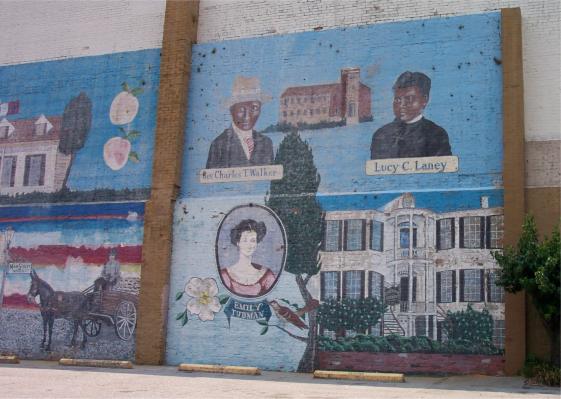 July, 2004 - A Scene Painted On A Downtown Wall In Augusta - Honoring Their History
Emily Tubman Is Pictured Here Beside The Ware's Folly House