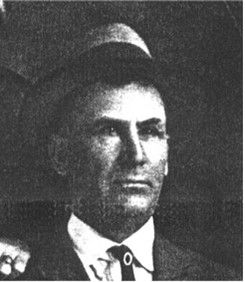 T.D. Willis was a New Testament Christian having been baptized for the forgiveness of his sin by Asa Davis in 1885. He began preaching the gospel of Christ in 1899, primarily in the field of his birth, in western Kentucky. He also preached for many of the smaller churches of Christ in Butler, Grayson, Ohio, and Muhlenberg counties. He was called from time to time to the polemic platform to debate the cause he loved dearly. Reports of his work were sent to the Gospel Advocate and Firm Foundation of his activities that took him on preaching missions to Ohio, Indiana, and Tennessee.

In 1924, his family moved to Louisville, Kentucky to work with churches in that city, primarily with the Parklands church of Christ. As his base allowed him to fan out in many directions to preach for many churches including: the Bardstown Road and Longfield churches in Louisville; to Providence, in Pulaski County: Shelbyville in Shelby County; Fairmount and Fairview congregations in Nelson and Washington Counties; at Providence, Quail, in Rockcastle County; Bethel church in Lincoln County; Smith’s Chapel in Adair County; Summit in Hardin County; Van Buren; High Bridge in Jessamine County; Big Reedy, Edmondson County; Friendship, Ohio County; Rasine and Horton’s Chapel, Muhlenberg County; and Sycamore church of Christ near Gravel Switch, Marion County, Ky.

In 1926 he began preaching for the Atwood Avenue church in Louisville. The church was a new plant by the Haldeman Avenue congregation. M.C. Kurfees was the preacher there, and a great friendship between the two ensued from for many years. From time to time T.D. filled in for brother Kurfees at Haldeman Avenue when he had to be away. In February 1931, T.D. spoke at the congregation's gathering to thanks brother Kurfees for his forty-five years of work for the congregation. The contents of the speech was published on the pages of the Gospel Advocate.

T.D. was vocal during the rise of Bollism in the Louisville area. He attended their meetings, resisted the premillennial teaching, and exposed what he believed to be the error of it anywhere he could. Several reports to GA demonstrated his resistance and efforts to teach against it.

In 1937, after nearly a dozen years working with the Atwood church, the Willis family moved back to near their home, residing in Caneyville. He continued preaching in the area and sending in reports to the brotherhood papers.

On January 11, 1942, Brother Willis laid down his mantle to take on his heavenly reward. His body was returned to the Shrewsbury community in Grayson County to be buried among his friends and loved ones. He had laid the early foundations of the Shrewsbury church of Christ as early as 1888, and 54 years later he joined those who had gone before into the eternal rest. 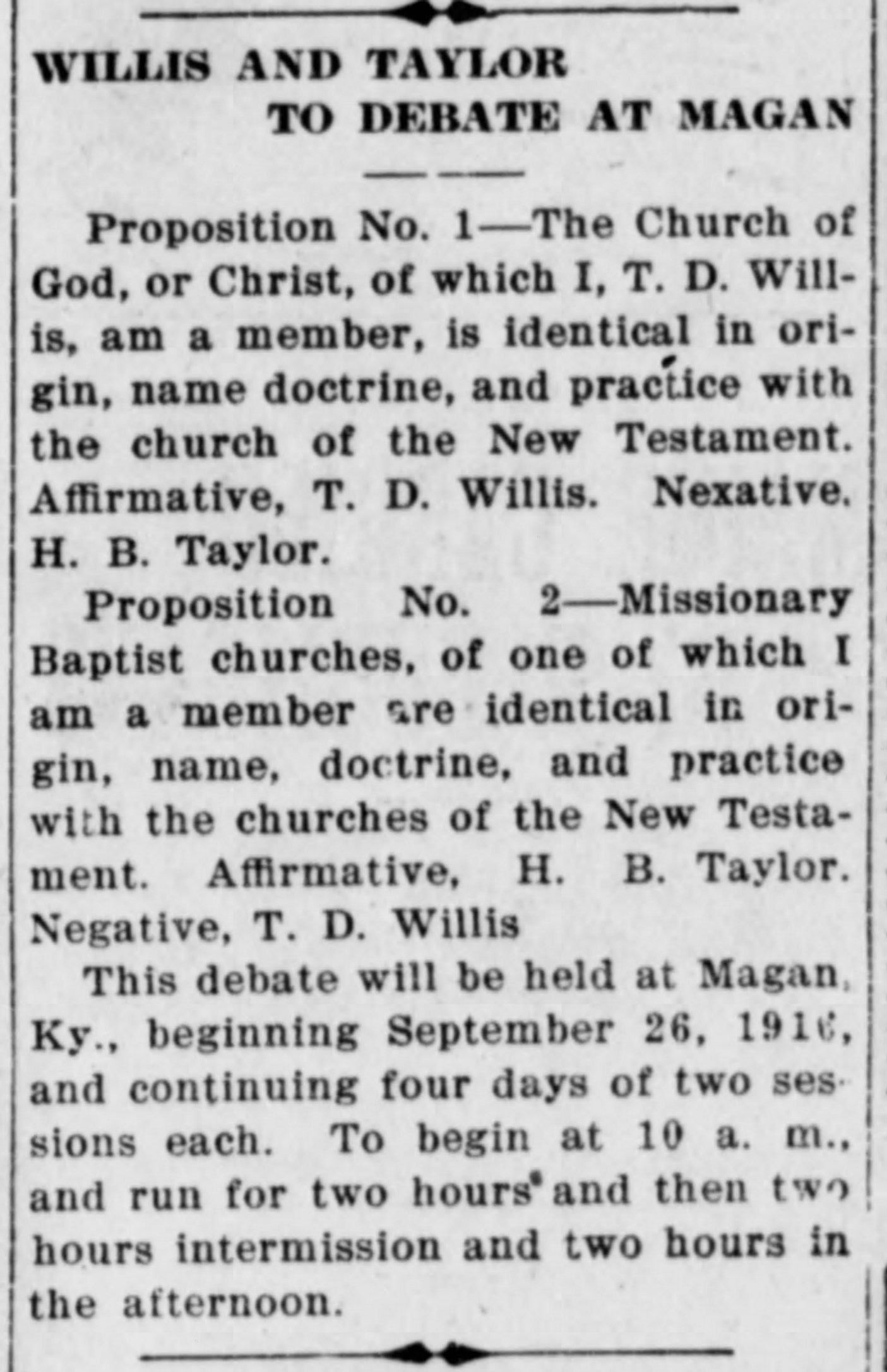 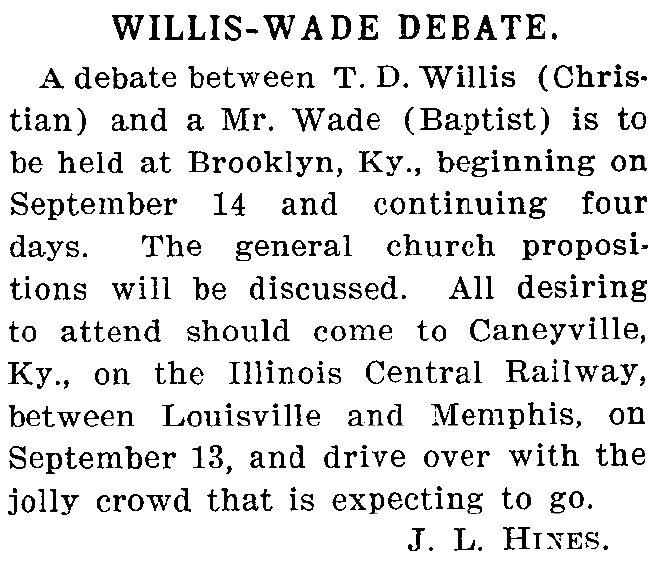 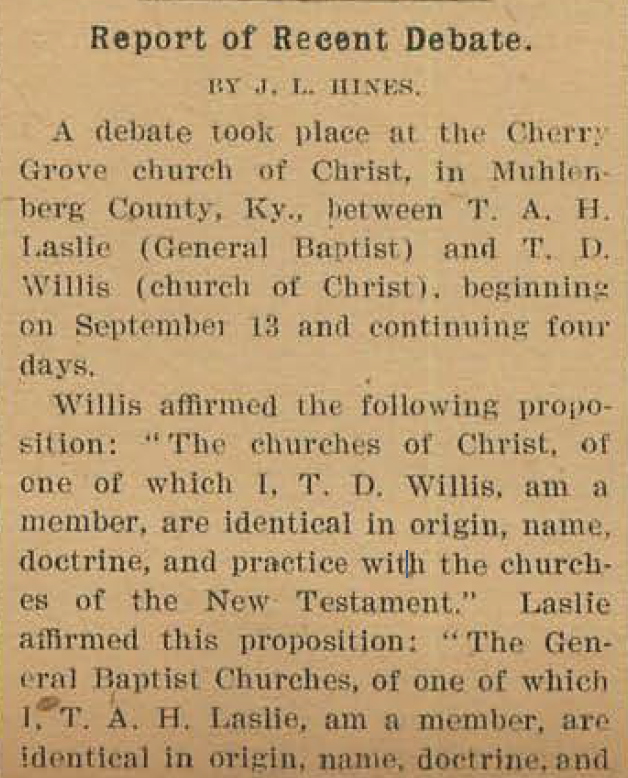 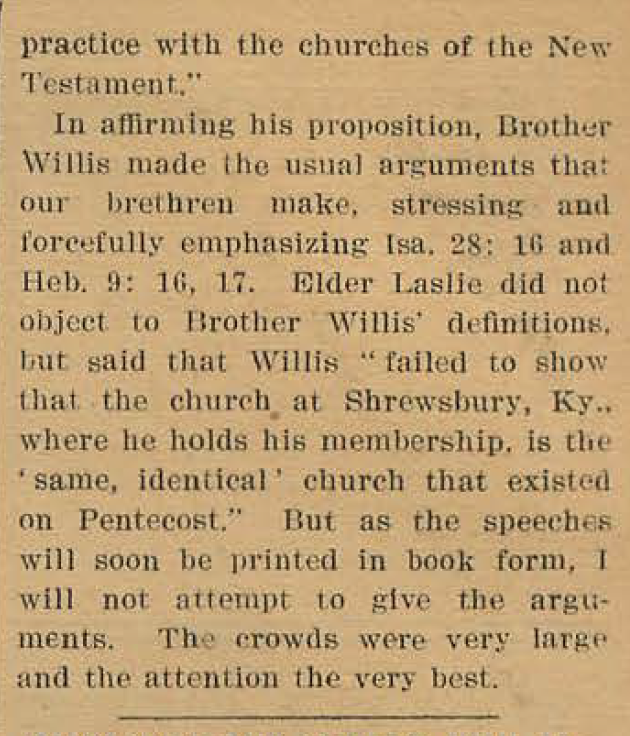 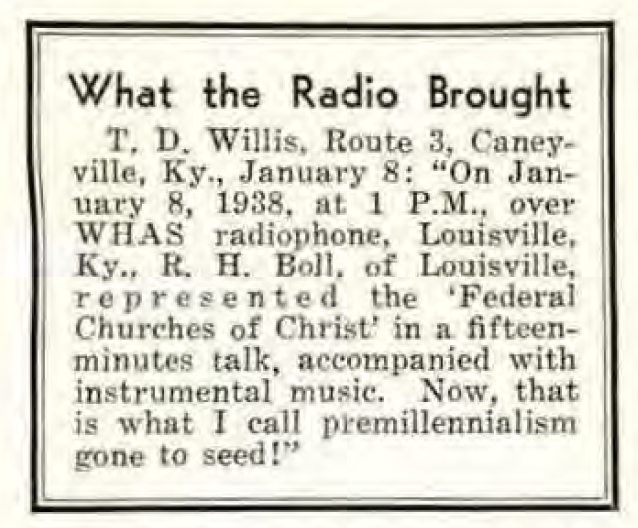 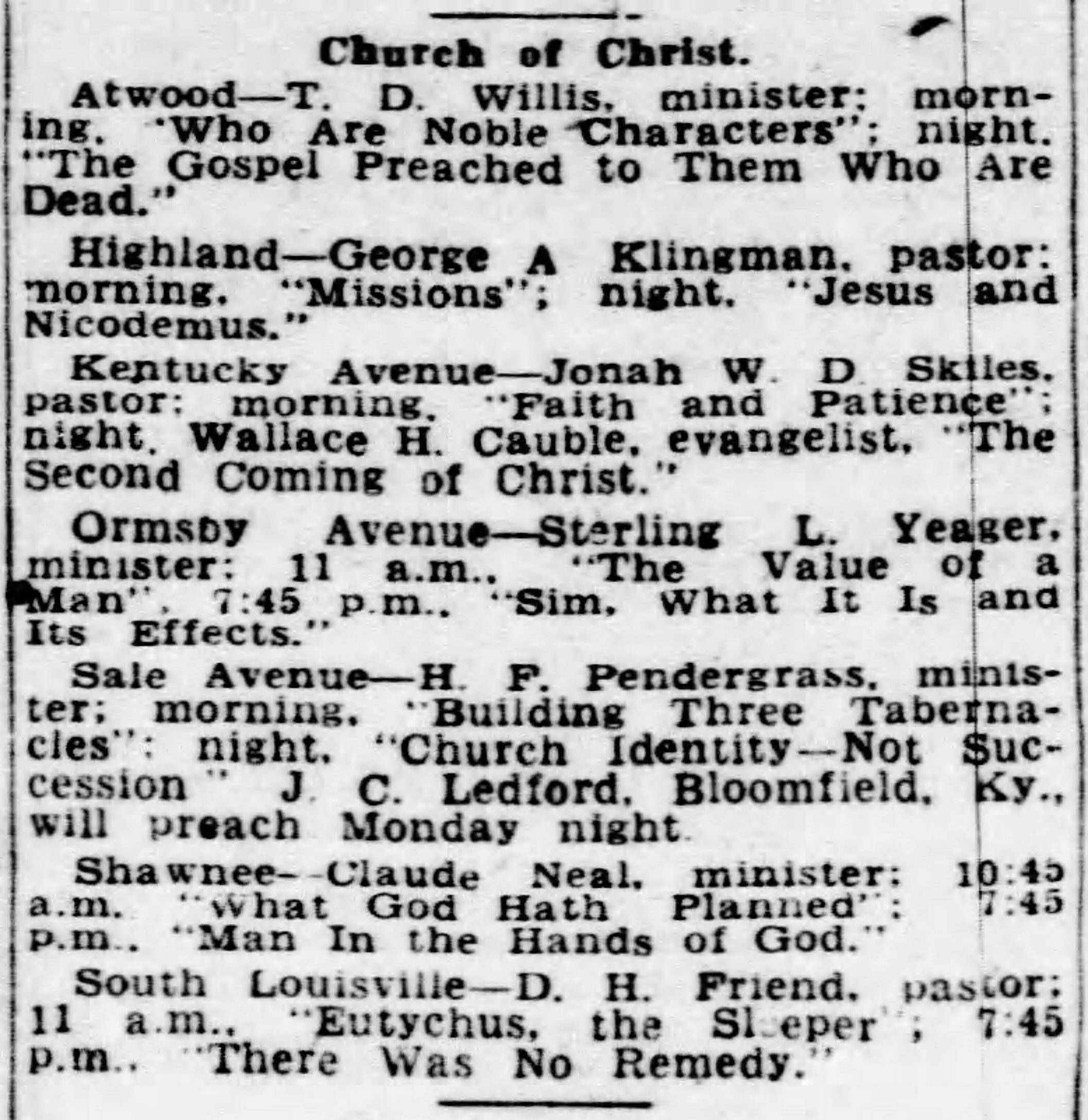 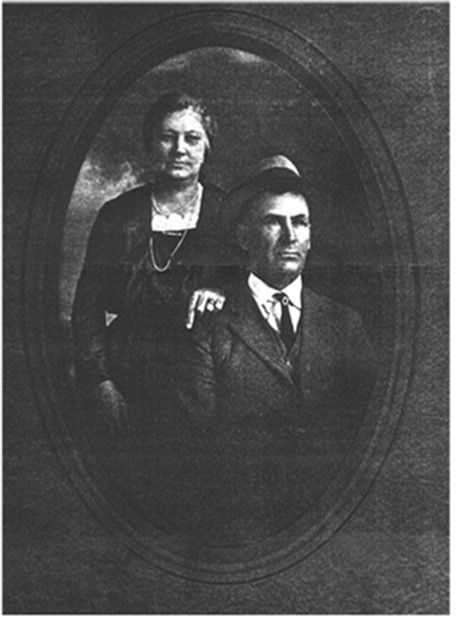 Willis. - T. D. Willis was born October 6, 1867; died January 11, 1942. He was married to Thenia Wells Huff, November 6, 1890. To this union two children were born, Elzie and Esther. Elzie died at the age of eight years. His wife, his daughter (Mrs. Esther Willis Woosley), and one grandson ( Challon Woosley) survive. He obeyed the gospel under the preaching of Asa Davis in 1885, and began preaching the same year. In the church house at Shrewsbury, Ky., where Brother Willis began his ministry more than fifty years ago, the writer tried to speak words of comfort to the family and friends gathered there. Brother Willis was a man of unusual ability in defending the word of God. During his long years of service he successfully defended the truth in public discussions. His life was spent near his birthplace. For ten years he was minister of the Atwood Church, Louisville, Ky.

Word reached me just a few days ago that my friend and brother, T. D. Willis, of Caneyville, Ky., left for his eternal home January 11, 1942. I met Brother Willis the first time about the year 1914, while I was located in Central City, Ky. We preached much in the same section. Those were the days when the Baptists and Methodists nicknamed us "Uncle Alex's boys." We debated with all who would sign propositions. I would moderate for Brother Willis and he would moderate for me. He would take on the "big boys" and I the "little" ones. Brother Willis met H. B. Taylor and T. A. H. Laslie, and he did a good job of it, too.

T. D. Willis was clean in life and sound in the faith. He was born October 6, 1867. On November 6, 1890, he was married to Miss Thenie Wells Huff, and to this union two children were born-namely, Elza, who died in 1900, and Esther, who married a soldier and lives far away. Brother Willis obeyed the gospel under the preaching of Asa Davis in 1885, and in the year 1895 he was ordained by the church at Shrewsbury, Ky., to preach the gospel.

Brother Willis was a preacher of no mean ability, a debater who met arguments, a writer of worth; he was a good husband, a kind father, and always loyal to his friends; he was humorous, but never indulged in the vulgar language of the street. I have lost a true friend. May God's richest blessings rest upon his wife and daughter. It will not be long until I will be coming home too; so meet me at the gate.

Theodore Willis is buried in the Shrewsbury Cemetery in Shrewsbury, Grayson County, Kentucky. Located between Litchfield and Caneyville, Shrewsbury in location on Hwy. 187. Go to the Shrewsbury Church of Christ and turn right on Rabbit Flat Rd. Then turn right on Layman Road. The cemetery will be on the right. You can park next to community picnic area and walk through gates. Head over to fence row near the road. The Willis plot faces the road near the first tree. GPS below is the actual location in the cemetery. 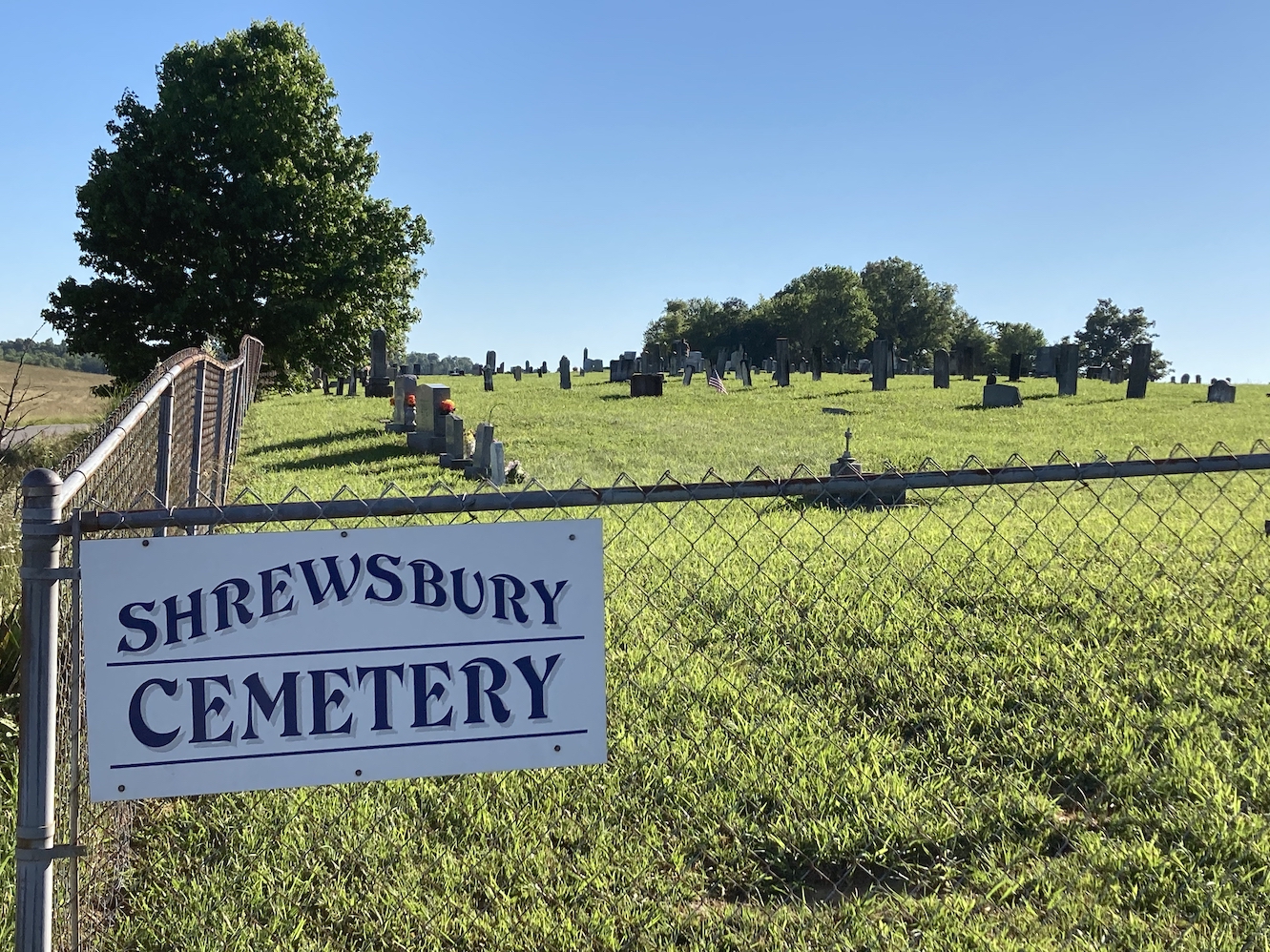 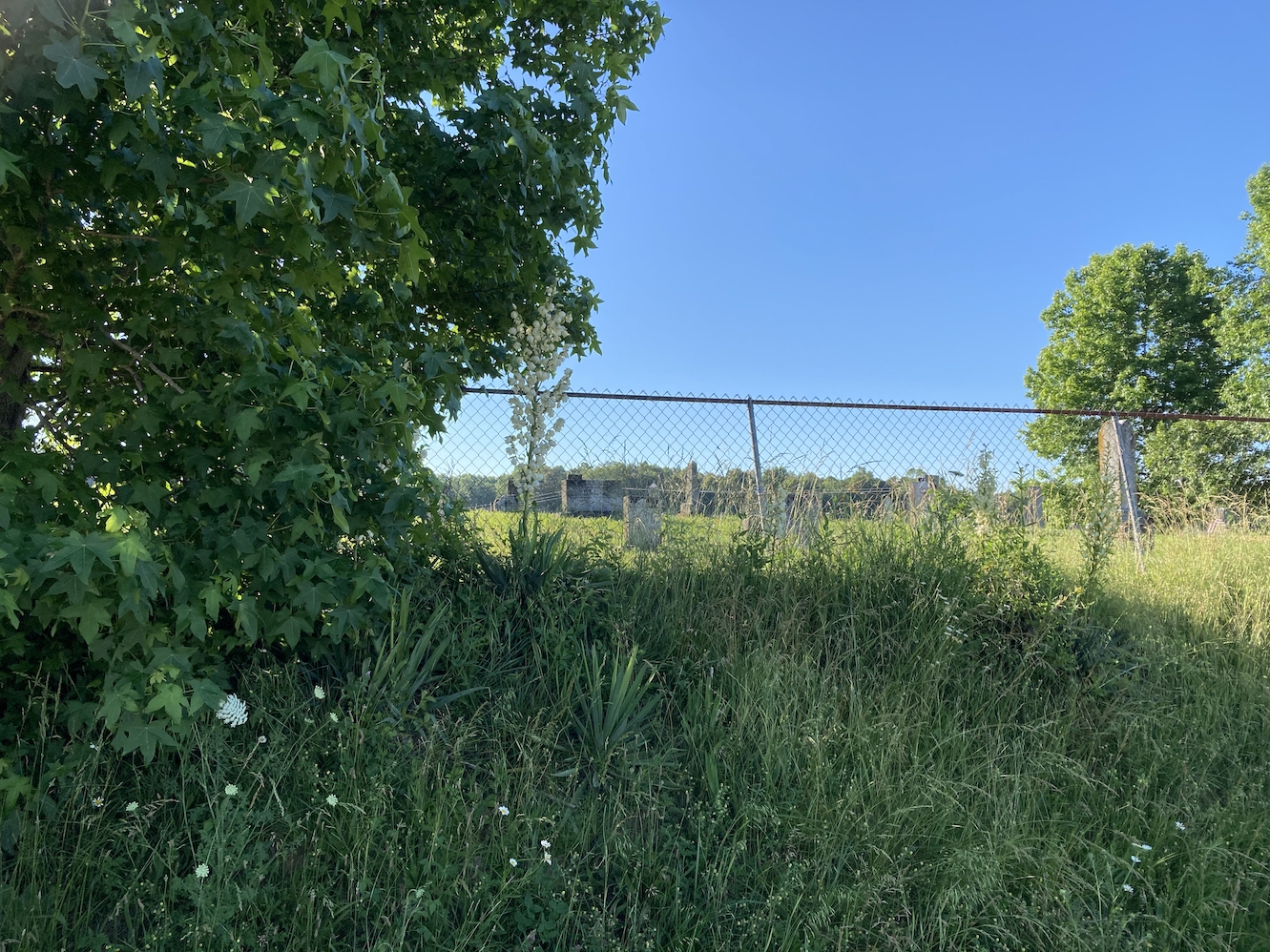 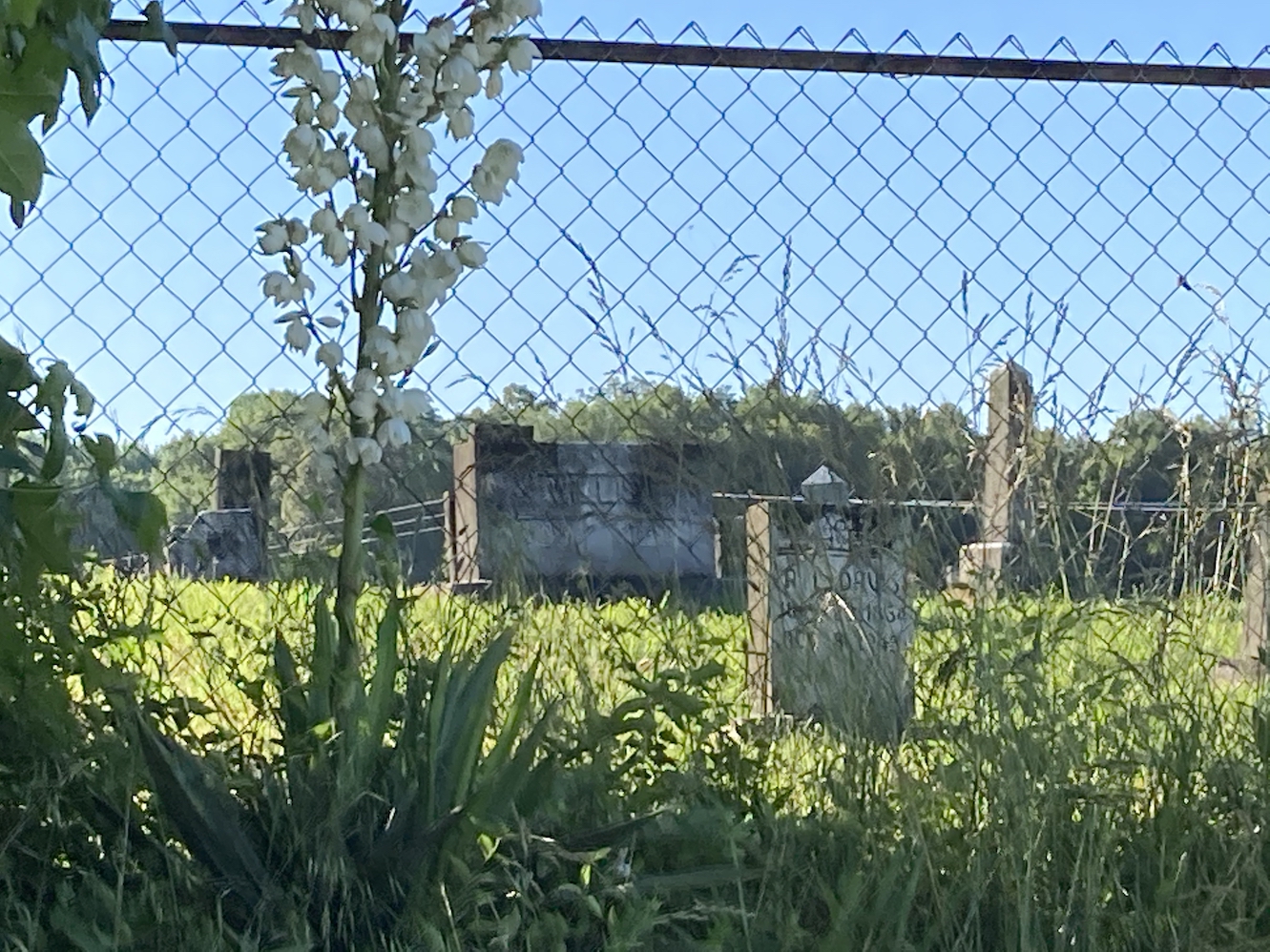 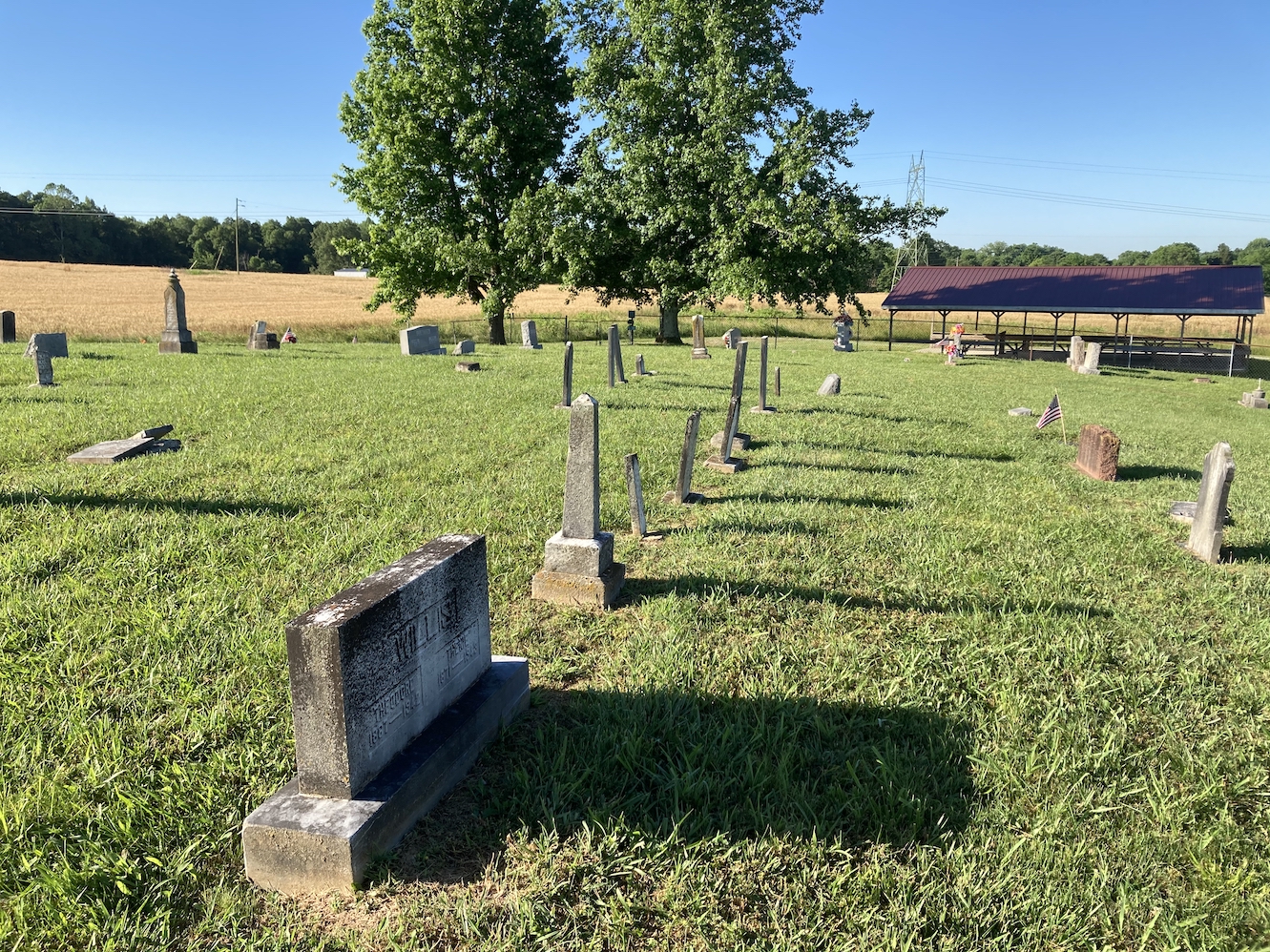 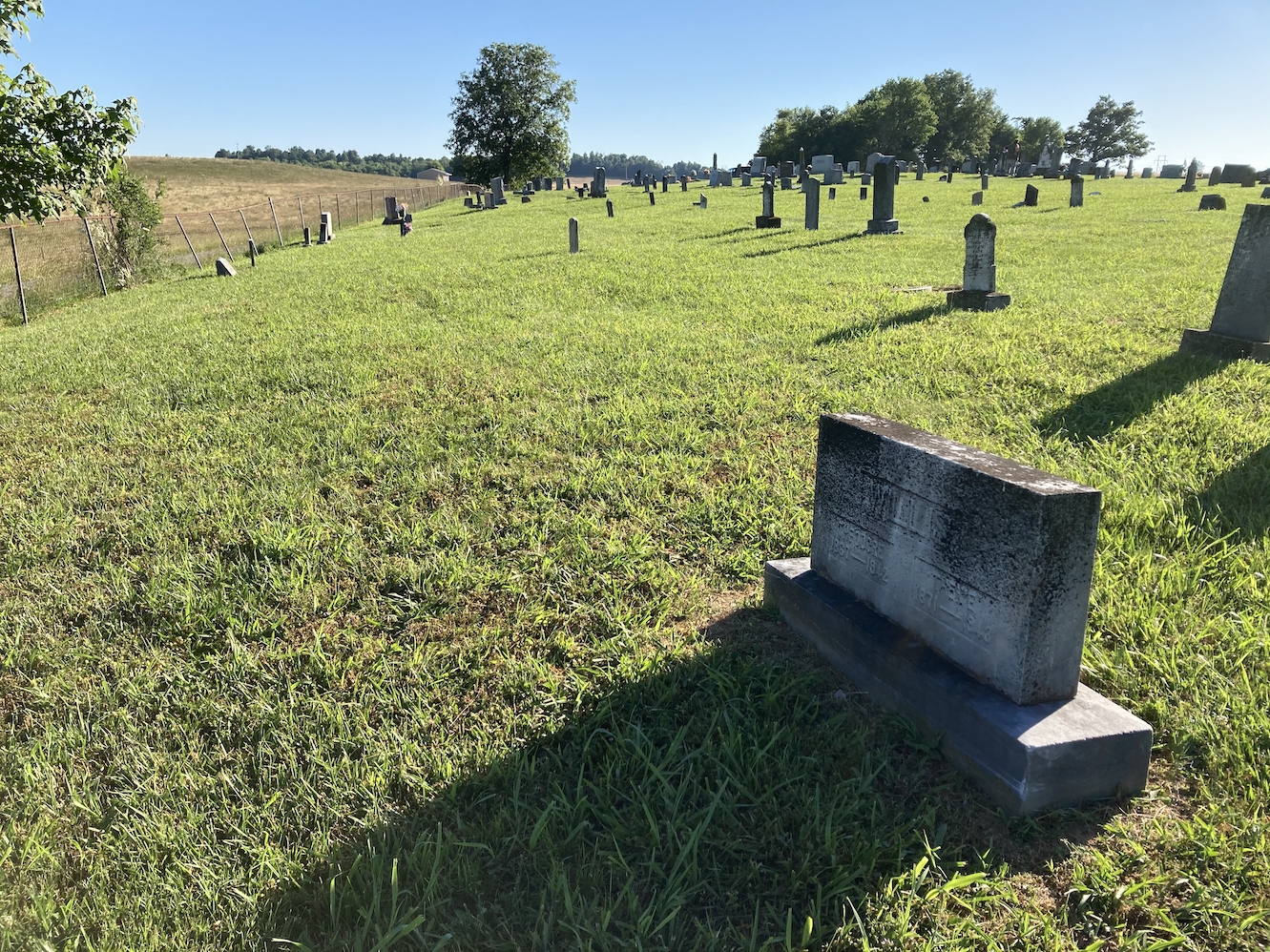 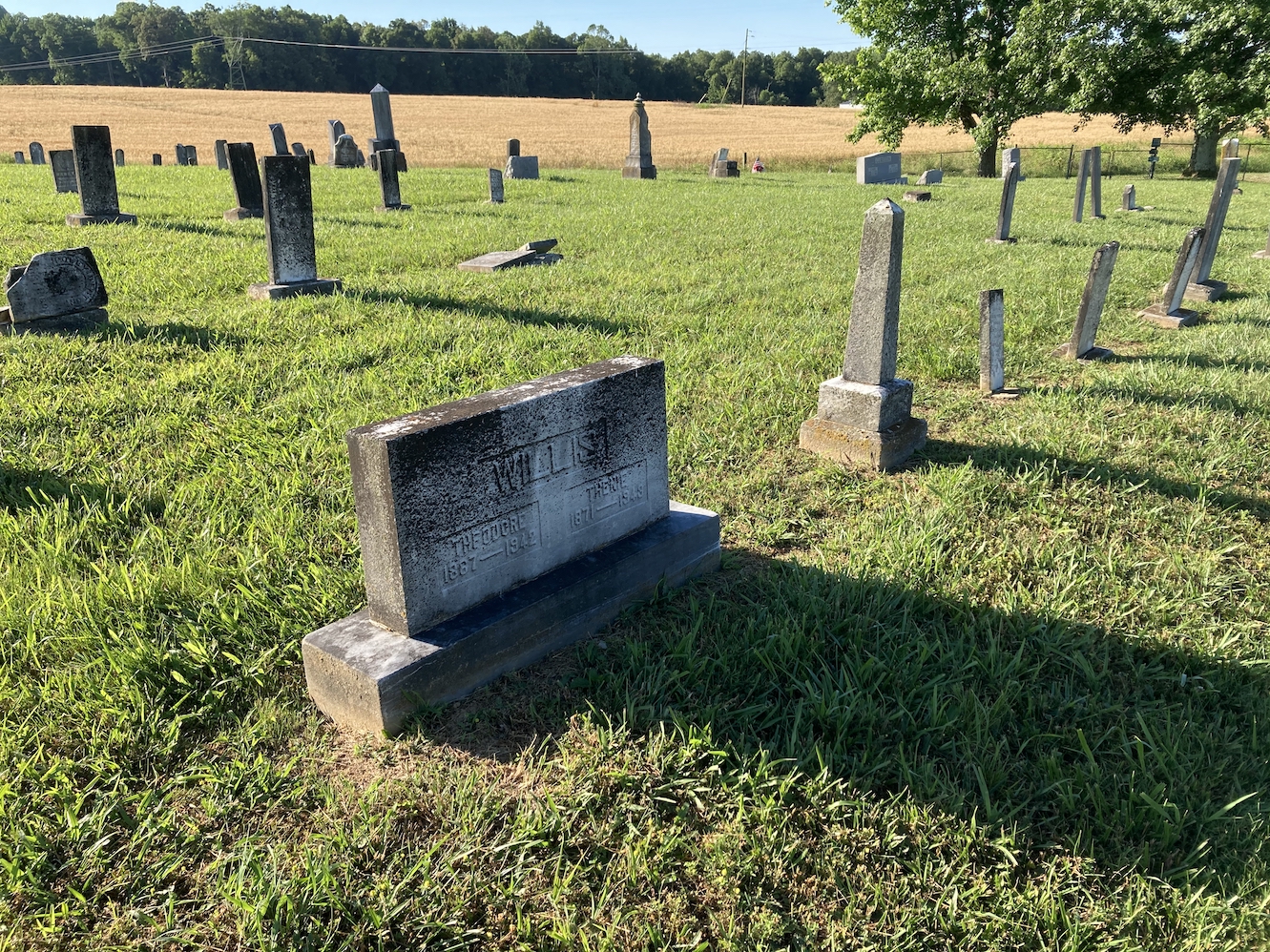 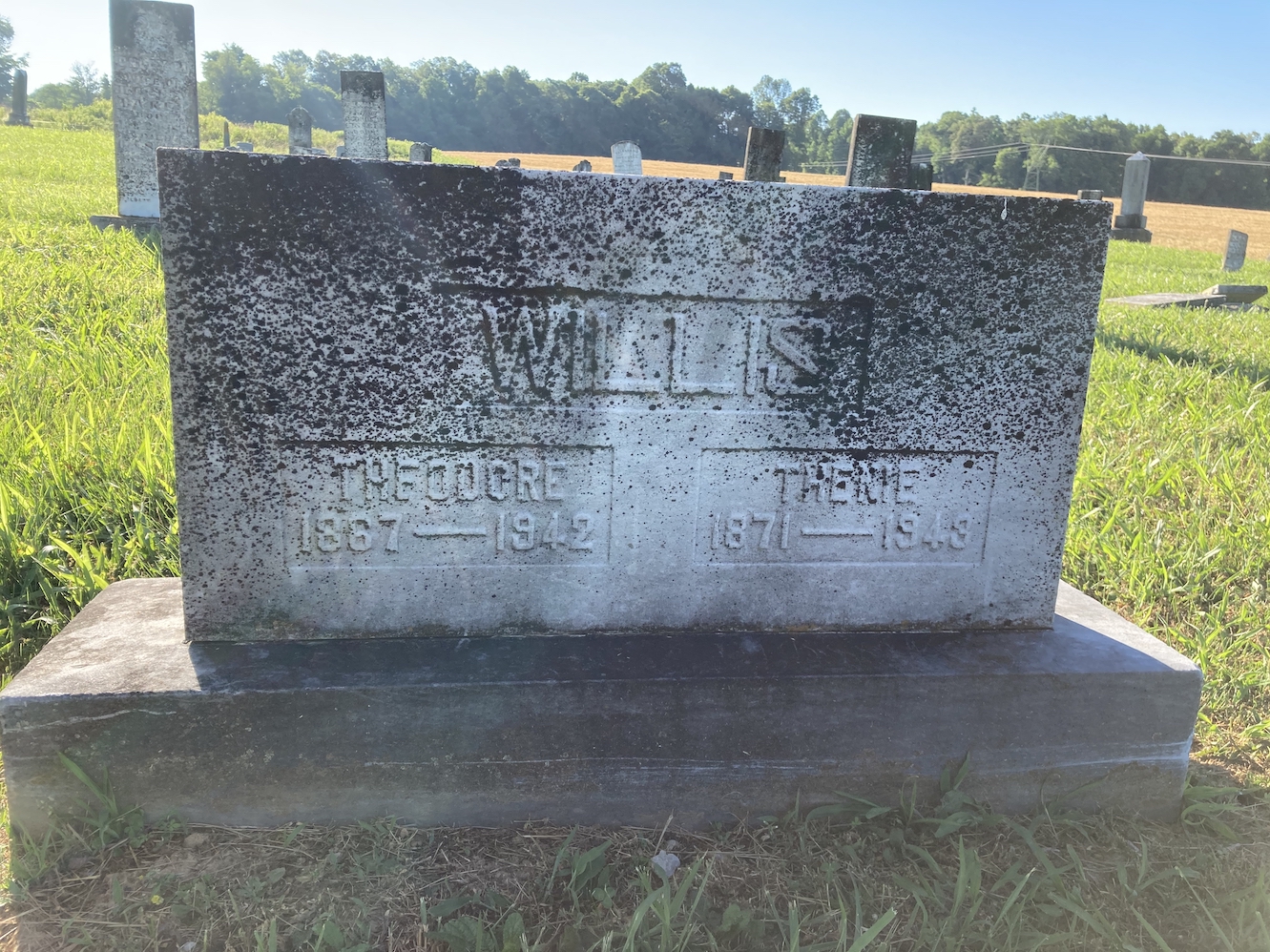 Special Recognition: Special thanks to Garry L. Hill who assisted me in the location of the grave of T.D. Willis. We took a day trip to north central Kentucky, visiting several graves of gospel preachers of yesteryear.