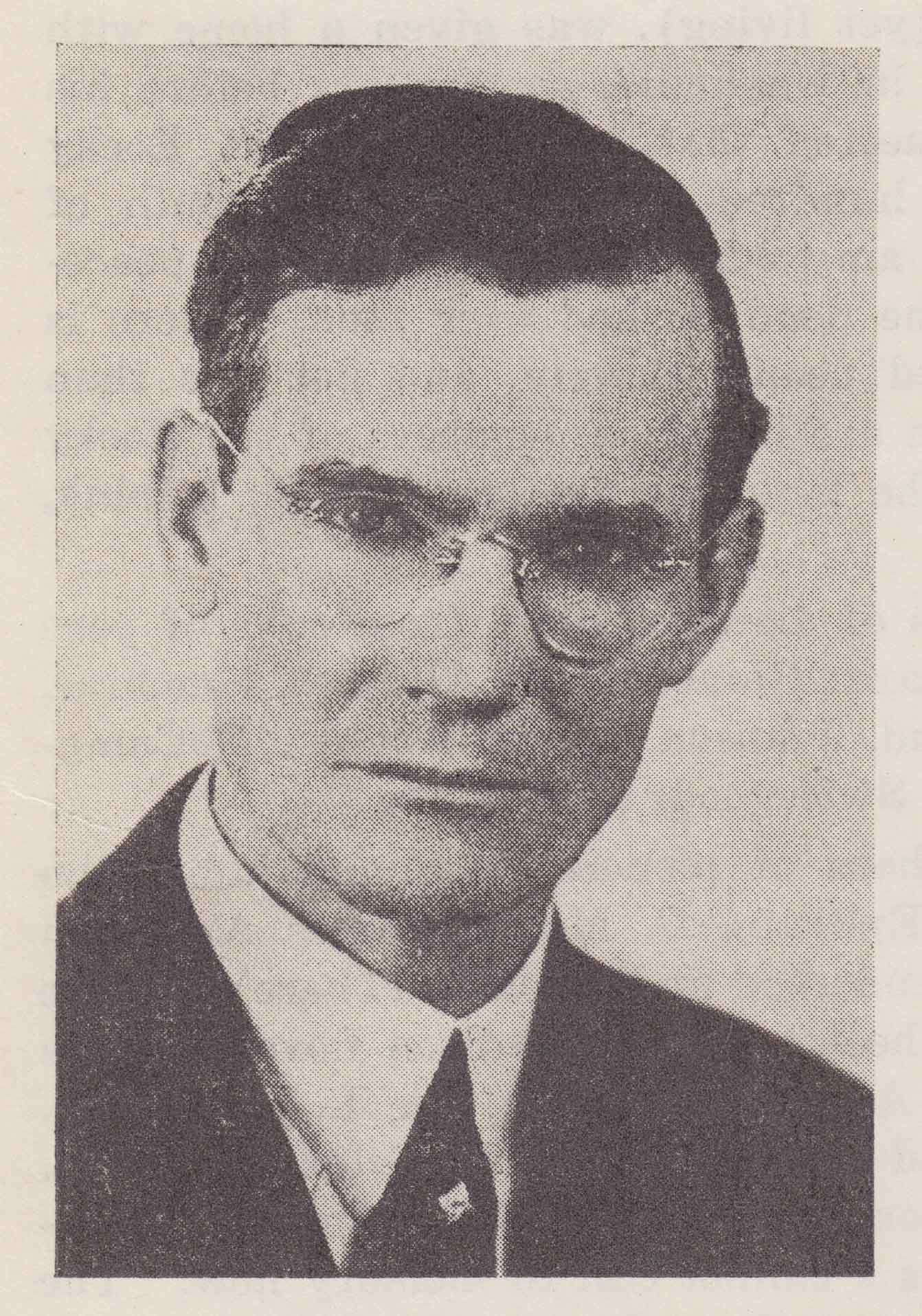 The Life of J.L. Hines

Jacob Lee Hines was born in Minervia, Ky., on Feb. 25, 1890. He died in Gunter, Texas, on Sept. 19, 1984, aged 94. At the funeral service, which was held in the chapel at Hilltop Haven in Gunter, C.L. Smith, an elder of Minter Lane church in Abilene and a close friend of the Hines family, spoke words of appreciation and encouragement. The body was flown to Mt. Juliet, Tenn., where he was buried by the side of his first wife, Nell, who preceded him in death by many years. He is survived by his wife, Virginia, sons Larry and Lee, and daughter, Jackie.

I became acquainted with J.L. Hines while he was preaching for the Fifth Avenue church in Corsicana, 1927-34. His work at Corsicana was among the greatest works of his life. During those years, he made a tremendous impact on that city and surrounding towns. Although he was a diligent student of the Word, he did not spend all of his time closeted in his study. He got out among the people of the community. Practically everybody in town knew brother Hines. He ministered to sinners as well as to saints. He preached the gospel on street corners as well as in church buildings, in school houses, tabernacles, and in the open air.

I remember particularly a Sunday evening service at Fifth Avenue when he invited all the Jewish residents of Corsicana to be special guests of the church. His sermon topic was, "Did the Jews Crucify Jesus?" As a young person, I was especially interested in seeing what he would say about that question. He handled it by laying the blame on the Roman authorities who were agitated by admittedly some, but by no means all or for that matter even very many, of the Jews. But then, he went ahead to preach a fine gospel sermon on why we all ought to examine our hearts with relationship to the question, 'What Shall We Then Do With Jesus Who Is Called the Christ?" At the conclusion of his sermon, he invited any Jews present in the overflowing crowd who wished to respond to come forward and take the pulpit. Sidney Marks, a leading Jewish businessman of the community, came as a spokesman for the group. His remarks were very diplomatic. He referred to the speaker as "Brother Hines." He said, as I recall it, "I am sure that if everybody here will follow the preaching of brother Hines we will be much better people." Then he introduced a somewhat humorous note by saying, " Brother Hines, after all is said and done, the only thing that will save a Jew is a good fall business." In a way this seemed to indicate that brother Hines had not accomplished very much with his sermon, but the fact is that he did convert some Jewish people to the faith. Furthermore, a principal result of the meeting was that he won so many good friends from the community.

I would like to see the church everywhere today follow some of the methods J.L. Hines was using 50 years ago in reaching out to people everywhere with the gospel. For too long we have been content in many cases to preach to ourselves.

One young man who was baptized by brother Hines was V.E. Howard. Howard moved to Corsicana in 1930 to become manager of a shoe store. Brother Hines came into the store one day and asked for a size 14AAA since he had a long narrow foot. After searching, V.E. had to tell him that he did not have a pair of shoes that would fit him. Then brother Hines, with a smile, said, "But I have something that will fit you," and he started talking to him about the gospel of Christ. V.E. was baptized in the fall of 1930 and preached his first sermon six months later. One month after that he resigned his position with the shoe company in order to devote his life to preaching the gospel. During the last 53 years, V.E. Howard has preached the gospel throughout the nation; he has preached on radio stations whose signal has covered the entire United States plus a number of other nations.

Brother Hines baptized me in the spring of 1931, and started me out as a preacher immediately thereafter. He was the one who advised me to enroll in Abilene Christian University (then College) in the fall of 1934. He encouraged many other young people through the years. Through his active years he held a good many debates and wrote a number of books. The last 12 years of his life were spent as a resident of Abilene. He was much loved by the people of Minter Lane church where he worshiped. 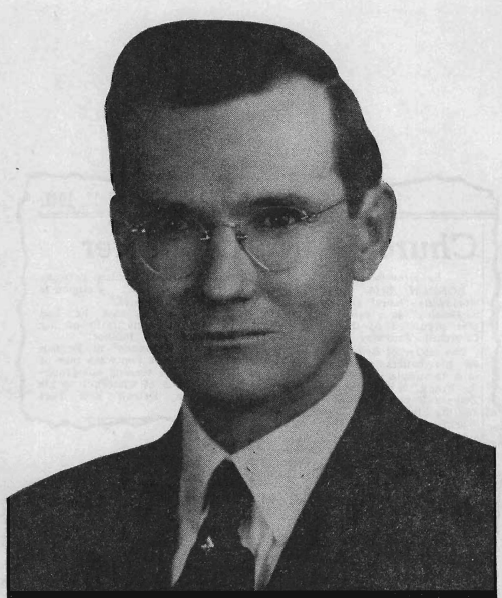 Jacob Lee Hines was born February 25, 1890, in the little village of Minerva, Kentucky, on the bank of the beautiful Ohio River. Son of William Thomas Hines and Katherine Brawley Oder Hines, he has at this writing, completed fifty-six years upon this earth.

When he was eleven months old his father died, having been a Methodist and a Mason. Thirteen years later he was left an orphan by the passing of his mother. For most of her life she had been a Roman Catholic, but six years prior to her death, obeyed the gospel and began to worship with the Lord's people.

When Brother Hines was eighteen years of age he gave up all of man's ideas, religiously, and became a Christian only. The following year he resolved to become a preacher of the Word and here began a life of godly service unequaled in many respects, by any of our day. Entering Potter Bible College, Bowling Green, Kentucky, he studied under the supervision of the saintly James A. Harding. Thus was laid a foundation for the many attainments of this man's life.

Beginning at this time to make talks on the Bible, Brother Hines' labors for the Lord have carried him from the Atlantic to the Pacific and from Texas to the Dominion of Canada. He has done Gospel work in more than twenty states of the Union, as well as Canada and has done local work during these years in Canada, Ohio, Kentucky, Alabama, Tennessee and Texas.

Thousands of people have been baptized in this gospel ministry. Tens of thousands more have been edified by his teachings from the pulpit and in his writings for various religious papers.

At this time, Brother Hines is Associated Editor of the "Gospel Broadcast," the most widely circulated publication in our brotherhood. In this position, he has been of service to thousands, as he receives and answers more inquiries upon the Bible than any man since David Lipscomb. In addition to this work, he is now in the evangelistic field, receiving calls for gospel work from all parts of the land. Three years in Potter Bible College, served only as a foundation for Brother Hines' educational attainments. Those years were followed by more than eighteen months work in Bowling Green Business University. In 1939, he received a diploma in Salesmanship and Business Psychology from the University of Texas. In 1940, he received the Ph. D degree from the University of Divine Science, upon the presentation of a thesis on the subject, "A Comparison of the Philosophic Principles of Saint John With Those of Heracleitus." In 1946, he was awarded the degree, Bachelor of Divinity, from Bible Baptist Seminary, Fort Worth, Texas.

As a member of the Lord's church, Brother Hines has never yielded to the pressure of any clique or group which sought to dominate him. He has remained free under Christ to preach the unsearchable riches of God's holy word.

As a strong contender for the truth, Brother Hines has engaged in many debates. These have been with Methodists, Pentecostals, Spiritualists, and Baptists. Among the latter, he has met such men as Sam Edwards and Doctor Ben M. Bogard, as well as Doctor J. Frank Norris. His meeting with Doctor Norris is in many ways, an outstanding example of gentlemanly and Christian deportment in discussion. Though he and Doctor Norris pressed the issues mightily, not one bitter word was spoken. Without Moderators, Timekeepers, Chairmen or rules, they demonstrated to the world that debates can be conducted in a gentlemanly way. This debate now being presented in book form, will do good through the years in its presentation of truth.

For the past thirty years Brother Hines has been blessed and sustained by his faithful companion. It was in 1916 that he was united in marriage to Nelle Geneva Kenton of Mt. Juliet, Tennessee. Since that time they have shared each others joys and sorrows and look forward to many years of service in the kingdom of God. They are happy that they are counted worthy to suffer for the faith in which they hope to die.

-Excerpt from The Norris-Hines Debate (on Premillennialism) 1946, pages 9-11

This debate that you are about to read, which was conducted in the Auditorium of the First Baptist Church in Fort Worth, Texas, between Dr. J. Frank Norris and me, is outstanding in many particulars.

We had no moderators, timekeepers, chairmen, nor rules to govern the debate.

Dr. Norris was my host throughout this discussion and proved himself to be a high class, cultured gentleman from start to finish.

Furthermore, he informed me that Mrs. Florence Mattison, his efficient stenographer, should be my stenographer throughout this discussion. She was always ready to write letters for me, furnish me Dr. Norris' manuscripts, see to it that I received all the gaIly proofs and assist me in arranging details for the book. No man ever had a more faithful stenographer.

I have never in my whole life been treated with greater courtesy by any people, at any time, and I want the reading public to know that I appreciate beyond words of expression every act of kindness shown me by Mrs. Mattison, Dr. J. Frank Norris and other members of his staff.

-Excerpt From The Norris-Hines Debate (on Premillennialism) 1946, page 12 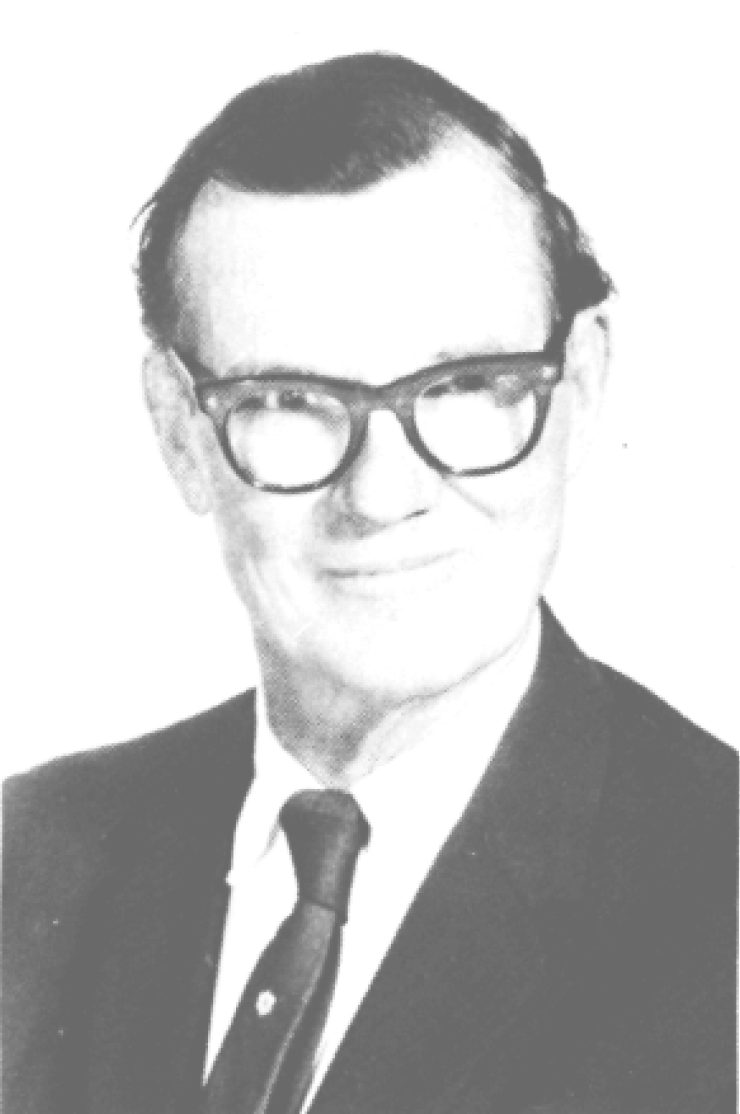 Mt. Juliet Cemetery is located on W. Division Street, just west of downtown Mt. Juliet, Tennessee. From Nashville, head east on I-40 toward Mt. Juliet. Take Exit onto Hwy. 171 and head left (north). Go a couple miles and turn left on W. Division Street. The cemetery will less than half a mile out on right. Enter cemetery, crossing railroad tracks. Head up hill. Just past the first little drive on the right. Stop the car and enter section on your right. This is section E. The grave should be easily found with GPS and photos below. The grave of another preacher, R.V. Cawthon, is nearby. Grave Location Section E, Lot 3, Space 2. 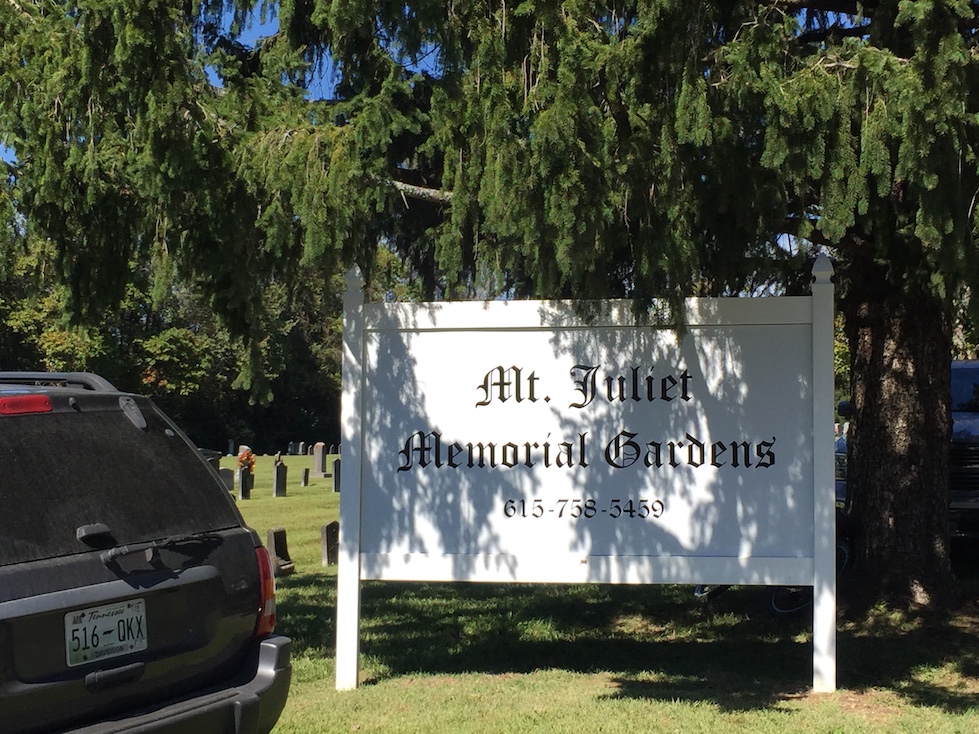 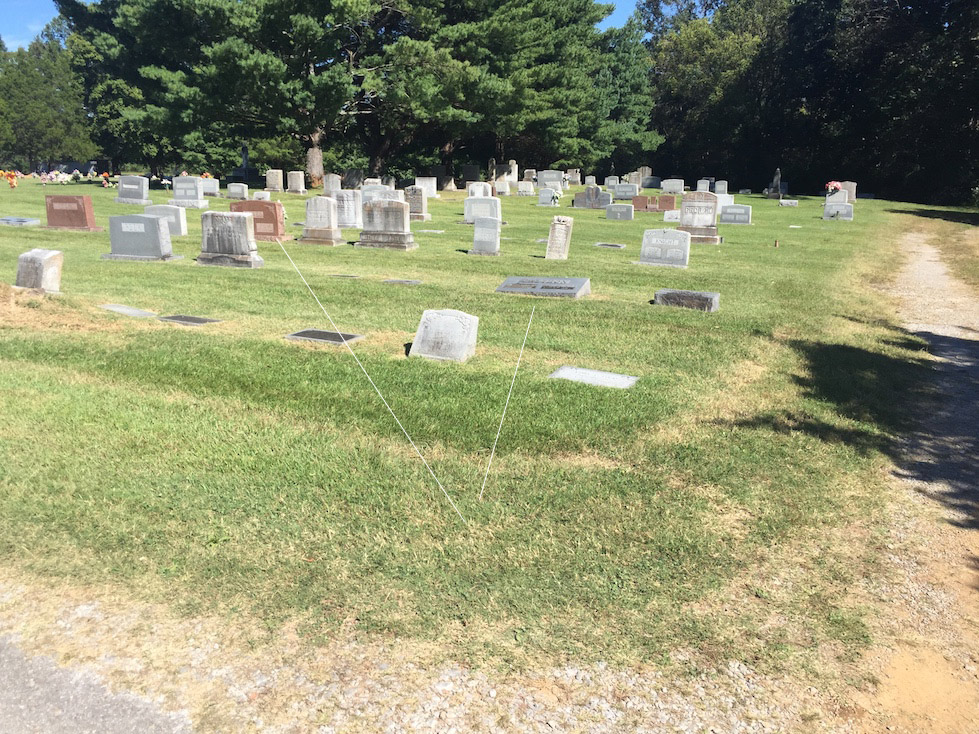 Pink monument is the Hine Plot. Grey stone is the R.V. Cawthon plot 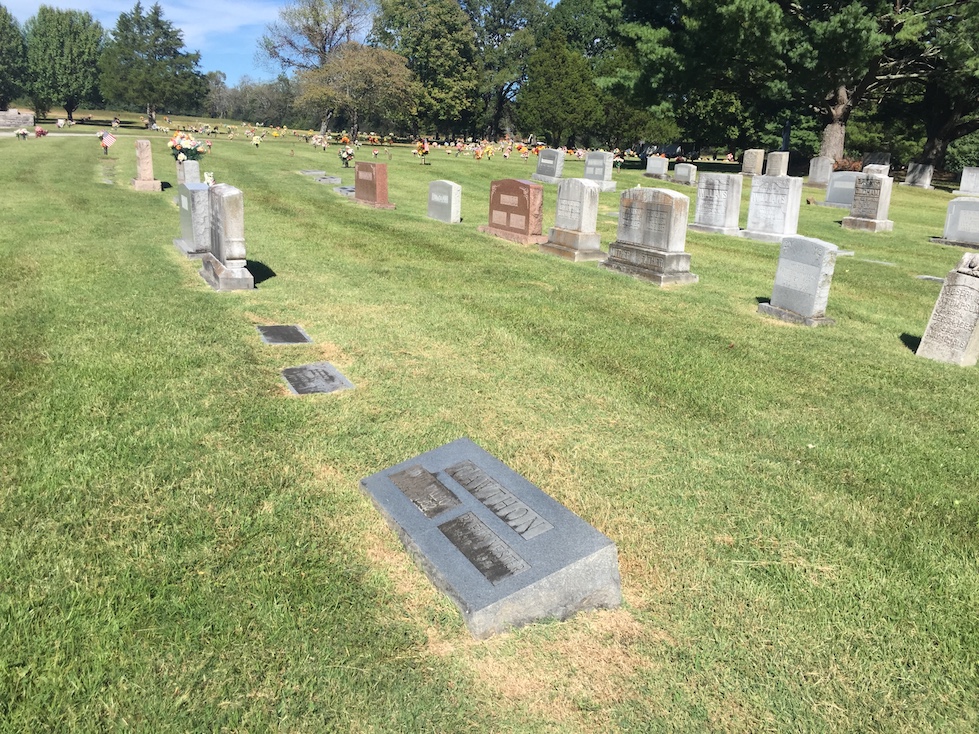 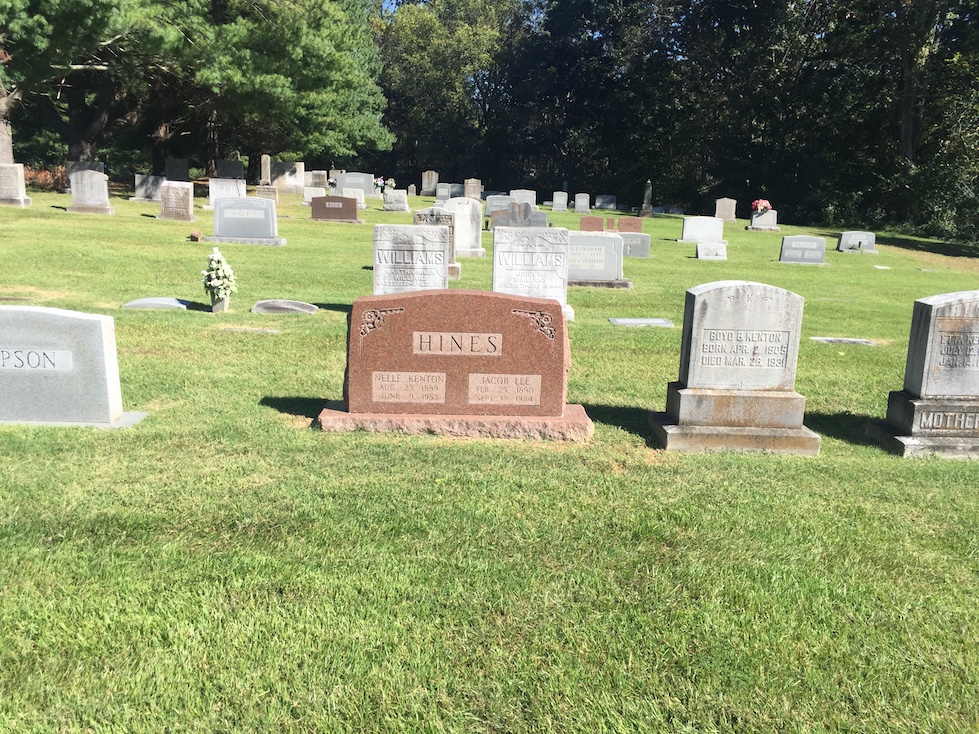 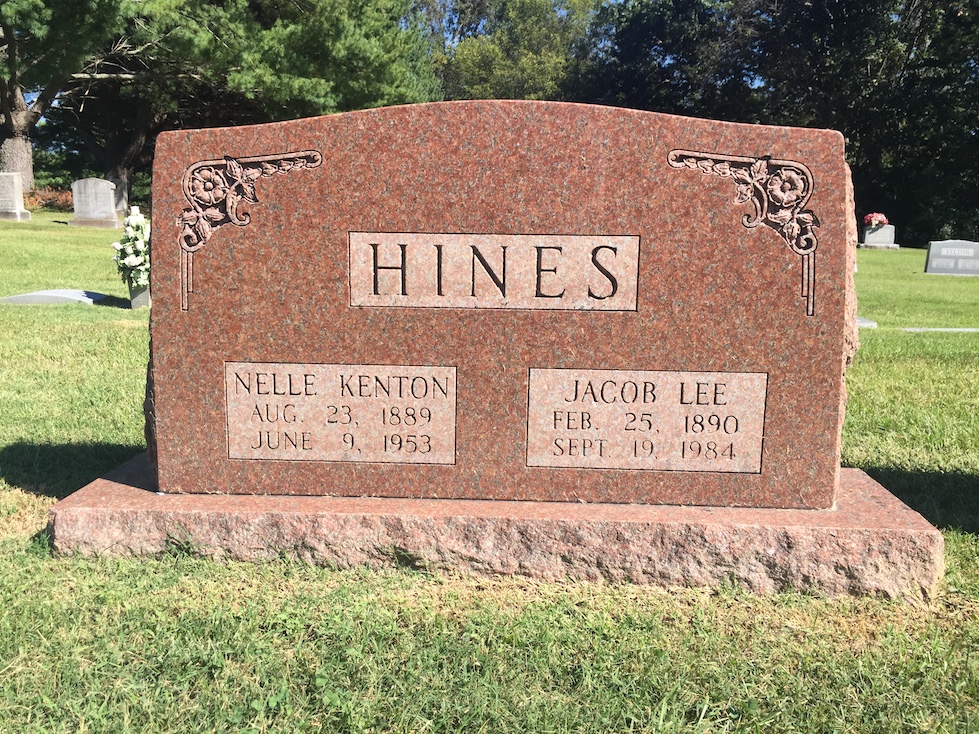