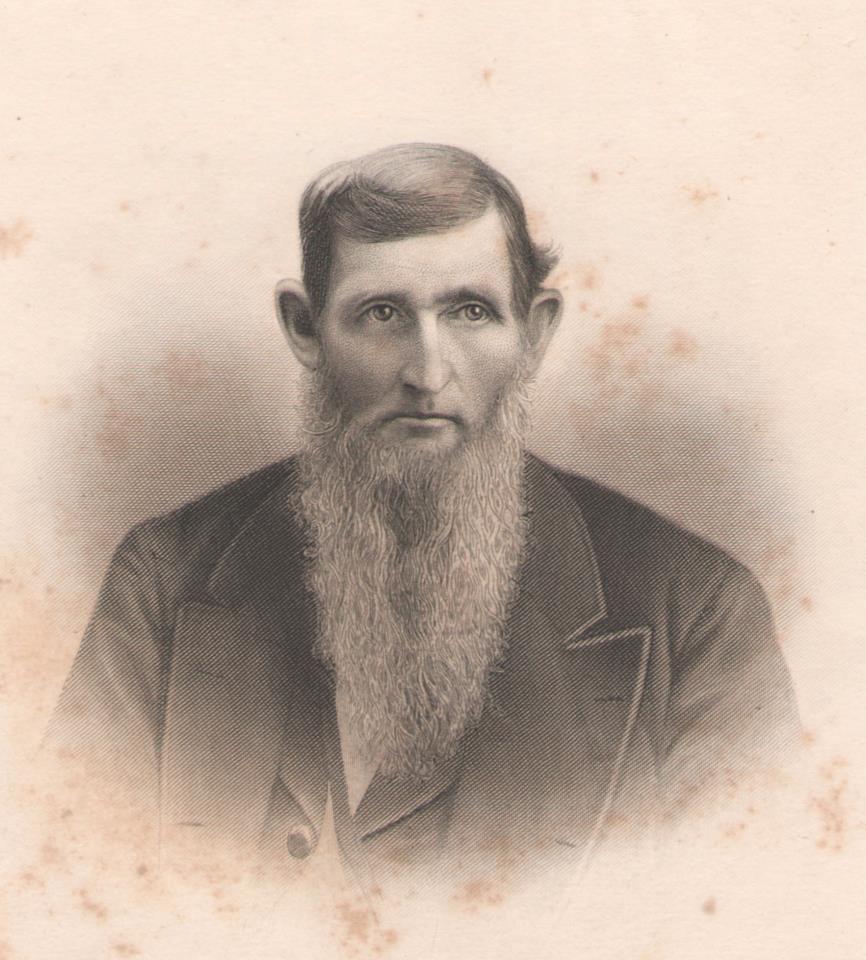 Biographical Sketch On The Life Of T.W. Caskey

Young Thomas grew up in what was then known as the wild west. Indians still lived on the land. It was not until the year after his birth that Columbia, Tennessee was founded. About forty miles north was Ft. Nashborough (now Nashville), and there was nothing but forest in between. It was a world of discovery then. So as a young man, Caskey's heart moved was directed toward the west.

He struck out on his own, moving over to Alabama and Mississippi. While in the area around Claiborne County, Mississippi he met a young woman by the name of Lucy Jones. She had been orphaned as a child. She was about four years Thomas' senior, but their love was strong. On December 5, 1837 the two were married. Under Lucy's influence he studied to become a Methodist minister. But becoming dissatisfied with Methodism, he left to begin his association with those in the church of Christ. For a time he also pursued a career as a blacksmith.

Within weeks of their marriage together they were to find out that Mary was with child. William A. Caskey was born on the 28th of October, 1838. Three years later another son was born to them, Hugh Thomas on March 8, 1841. Other children included B. Wells, Julia May, M. Pickett, Charley, Temple Withers, and Lillie Le.

After Hugh's birth the family moved over into the small West Alabama settlement of Gainesboro, where Thomas worked with a group of Christians. While there Lucy with struck with an illness that ultimately took her life on October 20, 1843. Thomas was devastated by this. He soon gave up his trade and devoted himself to the ministry. He worked closely with James A. Butler, Tolbert Fanning and Brother William H. Hooker in establishing the church in Greene County. Though small, the churches were able to help him financially.

For a time he also preached in Memphis, Tennessee and Paducah, Kentucky.

In 1845 he married Harriett Elizabeth Foreman Ferguson. He continued to preach in Gainesboro, Alabama; Clinton, Mississippi, and at Mt. Hebron. In 1849 he moved to Jackson, Mississippi.

Before the Civil War he involved himself with politics. He was a good friend to Jefferson Davis, and other well known southern gentlemen of the day. When the state of Mississippi was choosing to adopt articles of cessation from the Union, he was at the forefront of the effort to bring it about secession from the Union. He strongly felt that the Civil war was never a question about slavery, but about states rights versus the rights of the centralized government. 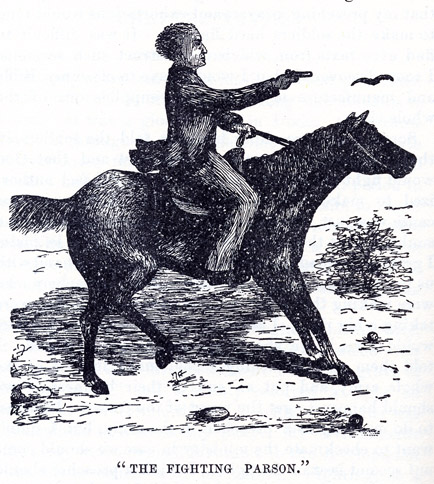 When the war broke out in 1861, he was appointed chaplain of the Eighteenth Regiment of Mississippi Volunteers. He was appointed as the hospital agent for the Army of the West and set up a hospital at the state university. When the hospital was sold to the Confederacy, he was appointed to a position with the state troops. During the war he became known as the "Fighting Parson." He brandished a double-cylinder sixteen-shooter revolver and a Colt rifle. Though involved with skirmishes he doubted that he ever let off a shot that actually killed a man.

After the close the Civil War, he moved to Meridian, Mississippi, working with the church there. While in Mississippi he made many trips for weeks at a time throughout Texas. He would return only for short periods of time before returning to the Lone Star state. Finally the family moved to Texas, living for a time in the city of Sherman. He purchased property there farmed in addition to his evangelistic work. For a while he set the bar, practicing law. He litigated a number of cases, one of which he appealed to the Supreme Court. Working pro bono cases caused it to be less than a financial goldmine. He soon gave up law. He only lived a few years in Sherman before moving to Fort Worth. He preached for the Christian church there the last few years of his life.

He was six feet three inches tall, with Long pointed features, a low massive forehead, and penetrating blue eyes, he was an impressive figure in the pulpit. T.W. Caskey was an author. He wrote an autobiography with sermons entitled "Caskey's Book." Later he wrote "Caskey's Last Book." The book "Seventy Years in Dixie" by F.D. Srygley, was filled with stories written and provided for the most part by Caskey.

During a trip back to Mississippi and while visiting in his old home in Meridian, T.W. Caskey got sick. One of his sons still lived in Jackson, another city that hosted their home in years past. He went there to stay with his family until he finally slipped away on August 10, 1896. His body was buried in the plot of his first child, William, who had preceded him in death some thirty-seven years previous, in the City Cemetery in Jackson, now called Greenwood. No marker was ever placed to identify the specific location within the plot, but is good marker identifies the plot with William's death information on it.

T.W. Caskey was one of the most interesting and successful preachers, debaters, and writers among Restoration churches. His witticisms in writing, in debate, and any social settings made him a man in high demand, easily loved, and greatly respected.

Editor's Notes: Efforts have been underway since about 2001 to locate the final resting place of T.W. Caskey. Literally hours of research, numerous phone calls and personal interviews in Alabama, Mississippi, and Texas have been involved in locating where T.W. Caskey died and was buried. Due to his prominence among Christian churches in the south, perseverance in locating his burial location seemed fitting. In January, 2006 during a trip to Texas for the Ft. Worth Lectures, I spent about three hours in Gainesboro, Alabama searching through two different cemeteries in hopes of finding Caskey's grave, or at least that of his first wife, Lucy, but to no avail. Searching cemetery records in the Ft. Worth, Texas, city library on two occasions did not help either. Visits to the Special Collections Room at Texas Christian University in Ft. Worth, and the Disciples Historical Society in Nashville, Tennessee were dead ends as well. Finally, while visiting in the library at Freed-Hardeman University, I looked through some microfilm of some old issues of the Christian Standard from the year 1896, I found a letter sent in by Caskey's daughter where she explained that her father was buried in the plot next to her brother in the Greenwood cemetery in Jackson, Mississippi (reproduced below). This brought about another trip from Atlanta to Jackson, Mississippi in early March, 2006. I met John Pigg, long-time minister in Ridgeland, who accompanied me to the old cemetery at Greenwood. We found the plot where Caskey is buried. We were disappointed to see that T.W. Caskey had no marker of his own. His eldest son, William, had died about 30 years previous to his death, and a fine stone was placed there for him. When the old preacher passed, the family never put another marker there to designate where his resting place within the plot was located. The photos of the monument below of his son's marker shows how weather and perhaps vandalism had taken its toll. It is in desperate need of repair. It would be good if someone were to clean the monument.

In 2009 the First Christian Church in Jackson, Mississippi installed a headstone marker honoring the life T.W. Caskey. After 113 years the grave that had so long not been identified is now identified with a beautiful marker. Many thanks are extended to the First Christian Church for contributing this marker. In January, 2010, your web editor traveled to Jackson, Mississippi and visited the grave of T.W. Caskey. The four photos at the bottom of the page were taken during that visit.

I see, in your issue of the 22nd, a short notice of the death of my beloved father, T.W. Caskey. I intended writing you the particulars, but have been so prostrated with grief I have not done so. My father was traveling in Mississippi at the time of his death, preaching and lecturing, and getting subscribers for his last book, which will be out this month. About a month ago, just as he finished a sermon on "How to Attain Happiness in This Life," he fell, apparently dead; but, after a while, life once more returned to the feeble frame. Since then, in spite of his feebleness, the intense heat, and the wishes of his family, he has continued to preach and lecture, though he had to sit in a chair. He seemed to realize that he had but a short time left to speak for the Master, and would not give up. On August 1st he reached Meridian, Miss., so prostrated and exhausted that we were telegraphed, and my brother, who lives near Jackson, Miss., our old home, went for him and brought him home. He was suffering from a severe bronchial attack, and on the night of the 10th he went home to God. He was buried in Jackson, Miss., by the side of his oldest son and other loved ones who have gone before. My father was eighty years old last January, and had been in the ministry fifty-six years. His trip through Mississippi had given him great pleasure. Everywhere he received an enthusiastic welcome by the children and grandchildren of those he had baptized in the long ago, and my heart rejoices that the last days of his life should have been spent among the people he loved so well. My mother and four children mourn his loss, but "we sorrow not as those who have no hope."
-Julia Caskey Crenshaw.
Fort Worth, Texas, August 23, 1895 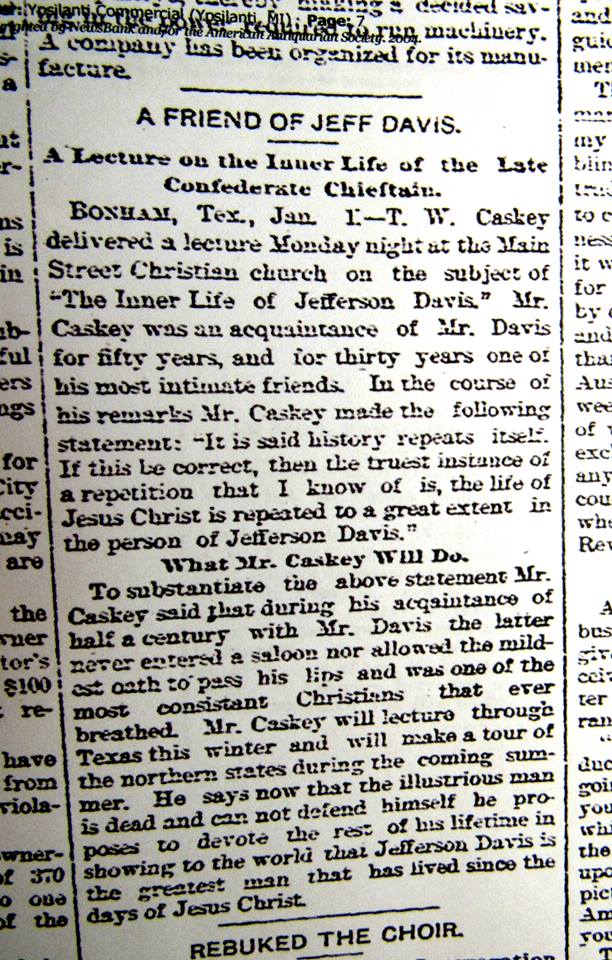 Directions To The Grave Of T.W. Caskey

T.W. Caskey is buried in the old Greenwood Cemetery in the city of Jackson, Mississippi. No marker identifies the particular location of Caskey's grave. He is buried in the plot of his son who preceded him in death about thirty years. In Jackson on I-20, go north on I-55. Take the E. Fortification Street Exit and go toward the city (west). Cross N. State Street and go three more blocks and turn left on North West St. You will soon see the cemetery on your right. Turn right on George Street. Enter the cemetery from George Street. Travel through the cemetery toward the rear at the roundabout and go left. Then take the first right. The plot is about the fourth plot on the right. 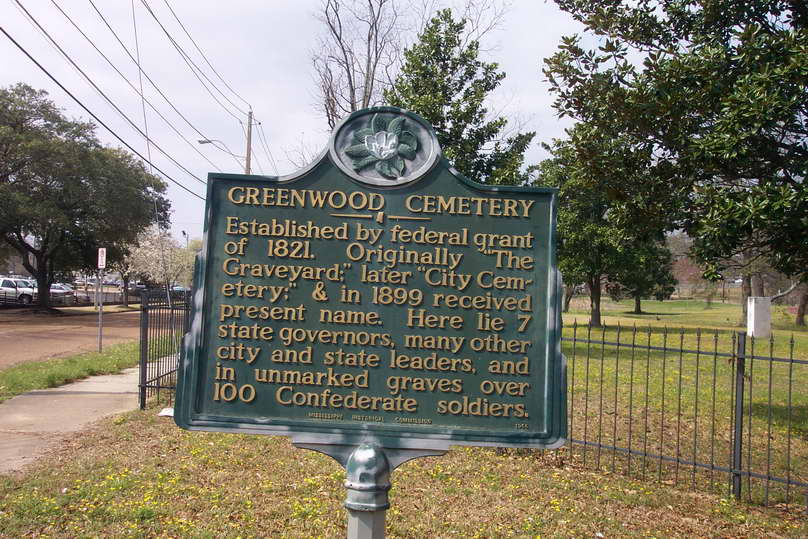 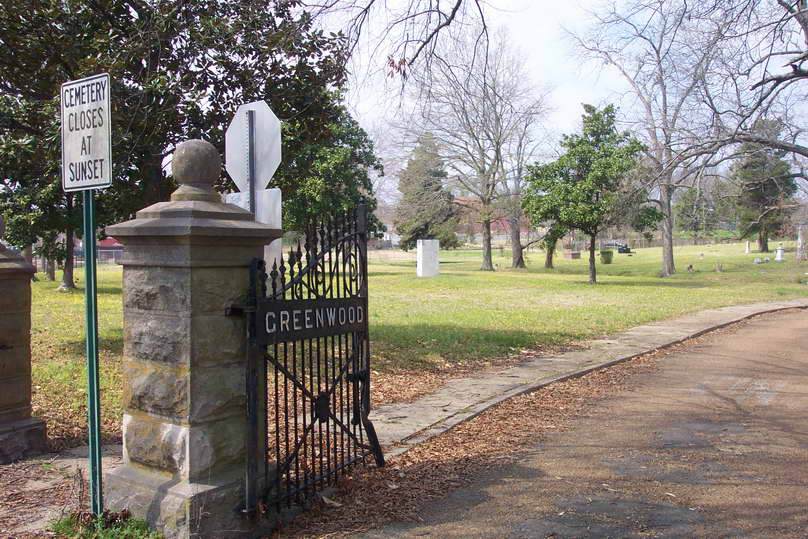 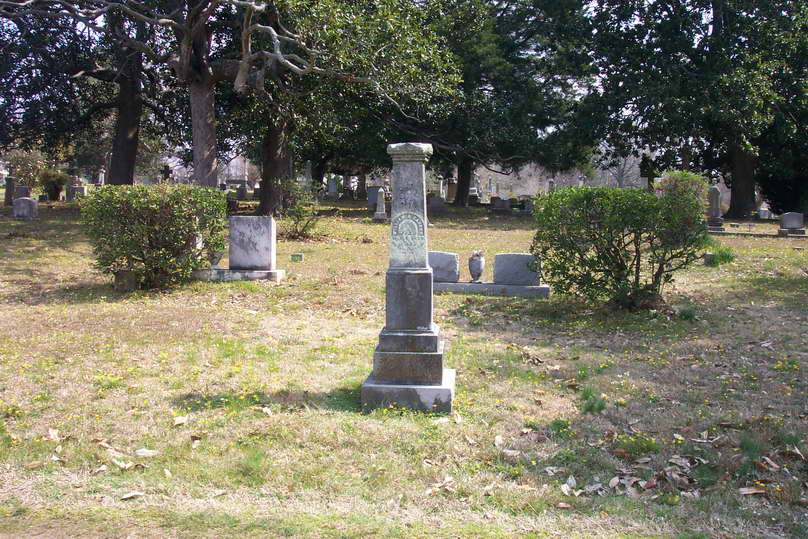 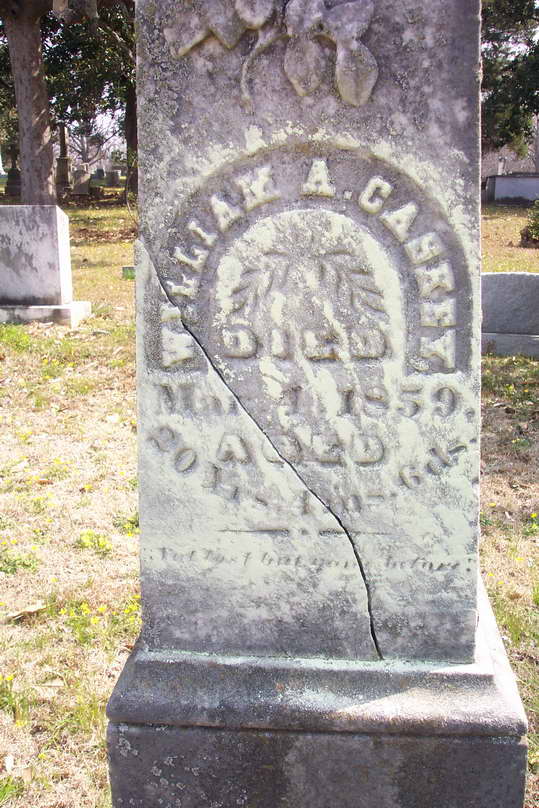 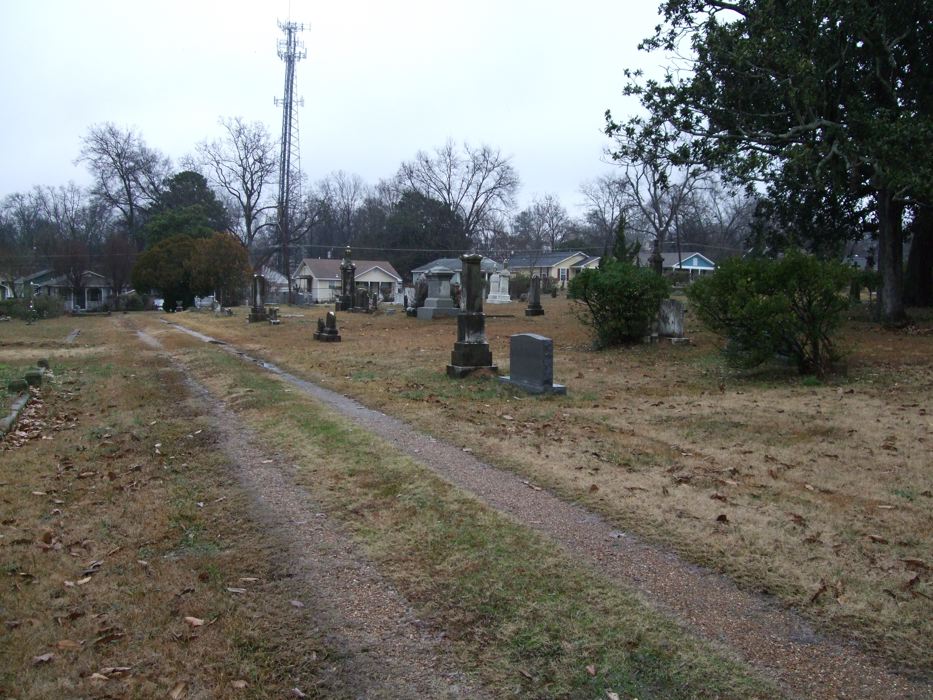 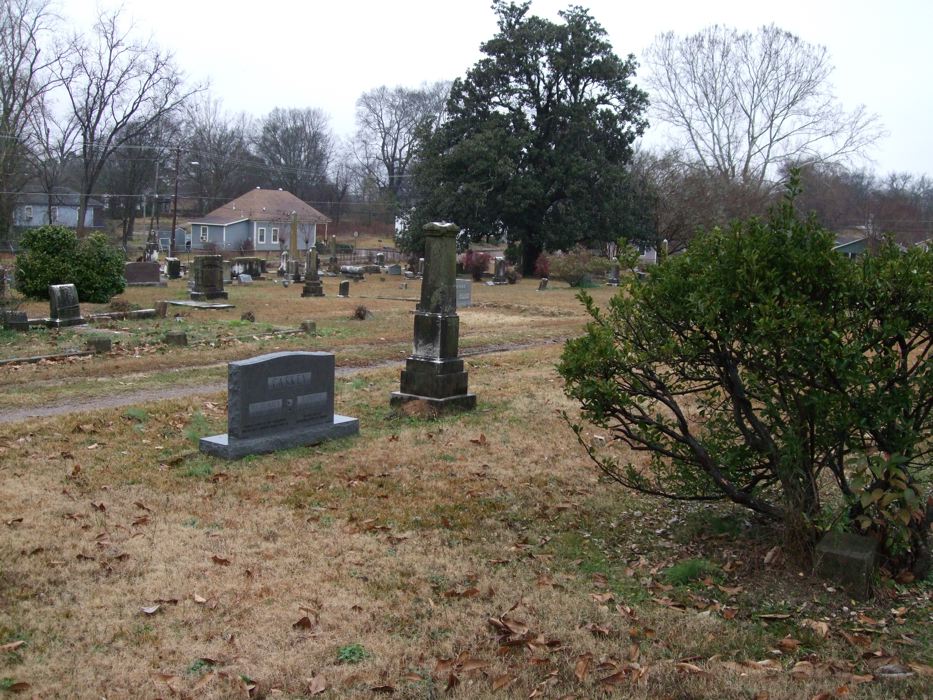 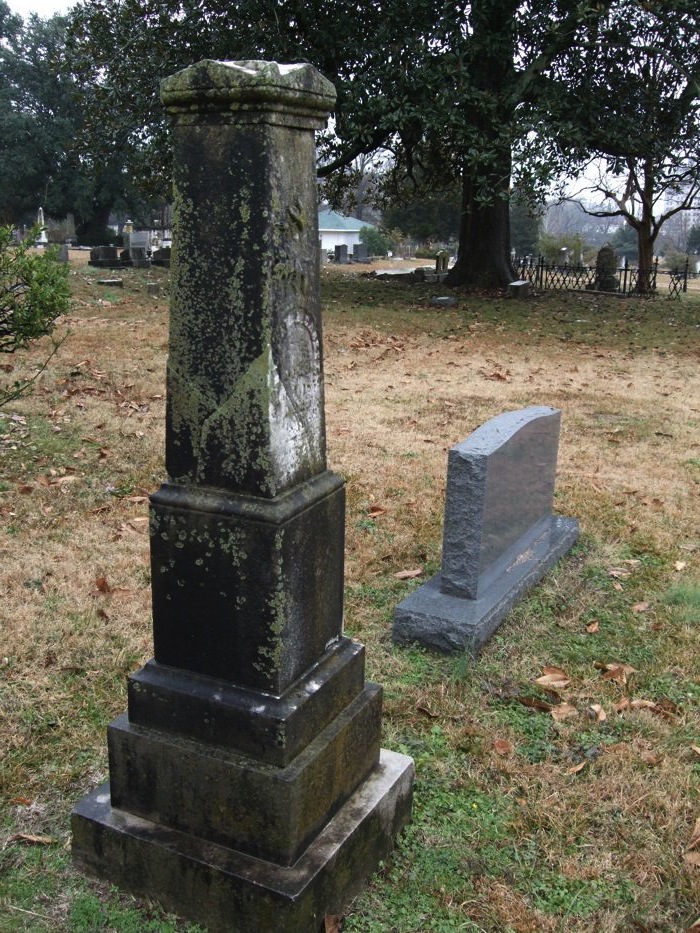 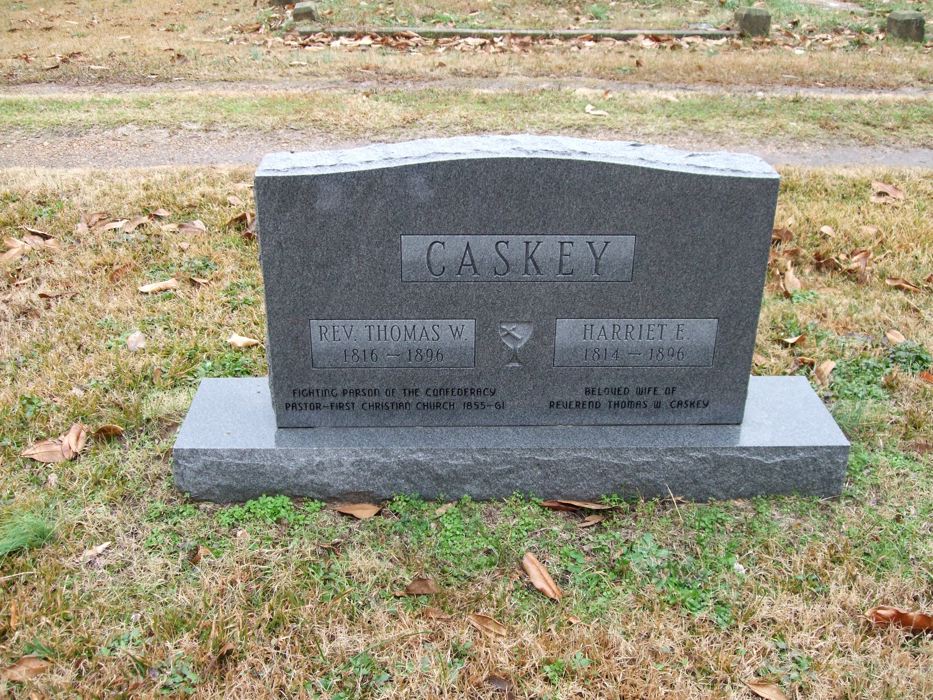 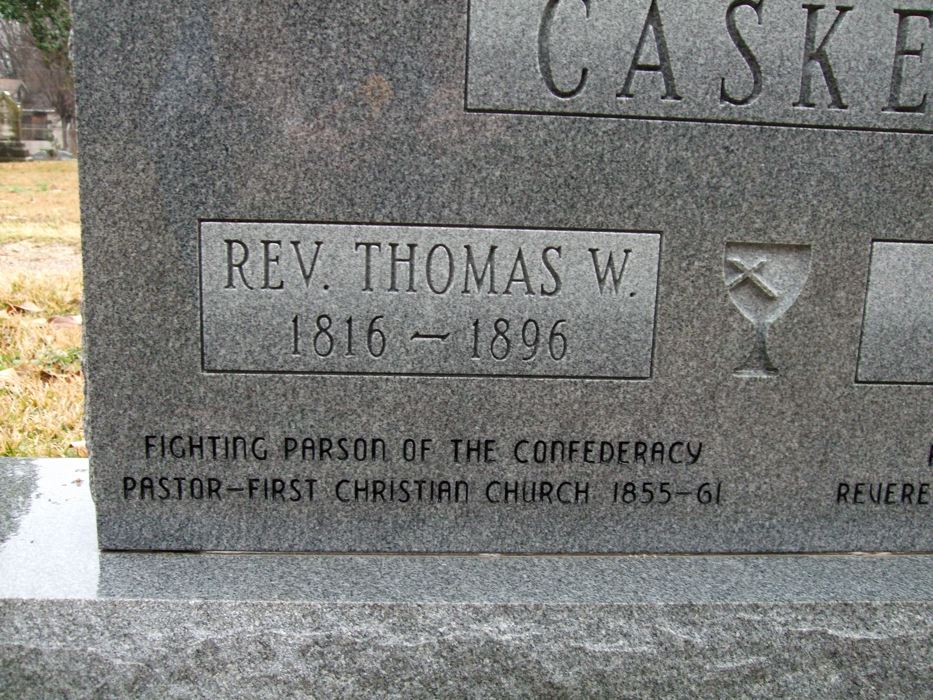 See Another Sketch On The Life Of T.W. Caskey