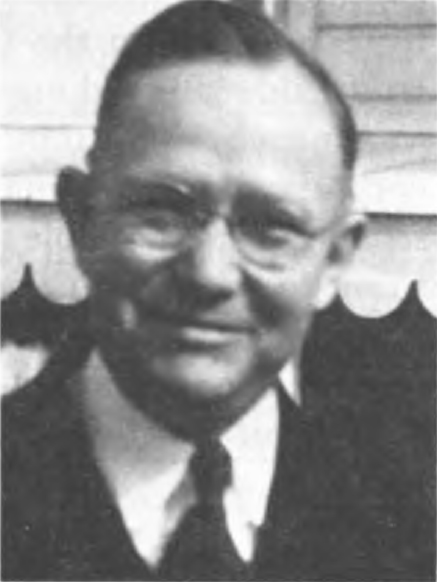 The Life Of Byron Fullerton

Byron Fullerton was born August 13, 1889 near Pleasant Point in Johnson County, Texas. His parents were J.T. and Mattie Marshall Fullerton, natives of Boone County, Arkansas. His father was a faithful Christian, a teacher, and a farmer.

They moved from Arkansas to Texas, made one crop the year Byron was born, then returned to Arkansas for a six year period. They returned to Texas, settling at West in Hill County, but soon moved to Kiowa County in Oklahoma, settling near Roosevelt, but soon moved to Hobart. Here Byron did much of his school work, completing his high school work there in 1908 and staying on for a year of post graduate work. While in school he was active in student affairs, being on the football and debating teams. He said that his social life suffered some because he didn’t have enough money to do much dating. (— an old problem!) At the age of eighteen he obeyed the gospel under the preaching of Bynum Black and was immersed in Elk Creek West of Hobart. He mentioned having heard such men as C.R. Nichol, E.A. Bedichek, Foy E. Wallace, Sr., and C.E. Wooldridge when he was growing up. He gave timidity as the reason he did not obey the gospel sooner. He had three brothers, all of whom preceded him in death. Along with his family, he was active in the work of the Hobart church. The church trained her young men, teaching them to make talks and otherwise participate in the public worship. Soon he, along with John Allen Hudson and others, was making talks. He “preached his first sermon” at Cambridge, a small place on the old Orient railroad between Lone Wolf and Sentinel, Okla.

About 1909 the J.G. Welch family moved to Hobart from Tecumsech, Oklahoma to operate a grocery store. The Welchs had four daughters, and Byron met them at church. On February 5, 1911 Byron was married to Myrtle of that family by S. A. Bell, a teacher in the nearby Cordell Christian College. At the time he was working in a grocery store and she in a bakery. One child, Betty, was born of this union. She was married to Stanley Voss, who died in 1970 while serving as an elder in the Central Church in Ada, Oklahoma and as an administrator in East Central College.

The Welch family moved from Hobart to Atoka to operate a grocery store, and Byron and Myrtle went with them to help in the store. The Church in Atoka had quit meeting, but they were able to get it started again. Here Byron did much class teaching, some preaching, and even led the singing some of the time. He was able to get a temporary teaching certificate, and began his life-time work as an educator at Buckholt, a rural school near Atoka. But he contracted malaria, and went back to western Oklahoma as soon as he was able. He continued teaching and preaching by appointment. In 1920 he enrolled at Southwestern Teacher’s College in Weatherford, Oklahoma and stayed in the home of A.J. Bradshaw, a faithful gospel preacher. He taught in Rocky and Butler, Oklahoma where he served as Superintendent of the school. In 1921 he joined Ira L. Winterrowd, and others, in the re-establishment of the Christian College in Cordell, which had been closed in 1918. He went there as Principal of the high school department, and continued for three years. He spent a period teaching in Garfield County, attending worship at Helena and also in Okmulgee, Oklahoma during World War I.

Through these years of teaching and attending school he continued to preach at every opportunity. He did much preaching for the Weatherford church while he was in school there, and in 1922 held his first gospel meeting in New Mexico. In 1923 he moved to Norman to attend Oklahoma University. He remained there until he had completed the work for his Bachelor and Masters degrees in 1926. While in school there he said that he “preached all up and down Highway No. 77 from Norman.” His Masters thesis was the development of a standardized Bible test. I remember that we took this test while I was a student in the Cordell school, and it was reported to us that members of the churches of Christ ranked highest on the test on general Bible knowledge, but that we were deficient in the Old Testament. I wonder how our people would “stack up” in such a test with other religious groups today?

In 1926 he moved to Gotebo, Oklahoma to head the school system and stayed there eleven years. The church in Gotebo was meeting in the school house when he went there, but he began to preach for it, and soon they had built a good meeting house. There was the usual religious prejudice in that small town, but he proved that one can teach school and faithfully preach the Word in the same community. While in the Cordell school he became a close friend of Robert Alexander, who was also teaching there. Brother Fullerton conceived the idea of a vacation Bible school, to help the church “teach them to observe all things. . .” He and Robert Alexander prepared a workbook, explaining how to go about having such a school, and also included in the workbook lessons from the book of Acts for a school. He conducted such a school in Gotebo in 1930, and so far as he knew this was the first such effort among our people. Robert Alexander was preaching for the Church in Wewoka, Oklahoma, and soon they had such a school there. Among other early day vacation Bible schools among our people was one he conducted in Muskogee, Oklahoma, where Cleon Lyles was preaching, and later one with the Sixth and Iowa Street church in Chickasha.

From Gotebo he moved to Chickasha, Oklahoma, where he worked as local evangelist with the church at Sixth and Iowa Streets, his first “local work.” Four years later he moved to the South Main Street church in Big Springs, Texas, then to the Walnut Street church in Sherman. From Sherman he went to the Culbertson Heights church in Oklahoma City, where he worked as local evangelist along with John H. Banister. In 1946 some brethren in Norman decided to start a new congregation close to the University campus in the hope they could exert more influence on the students there. They invited him to that work and there he remained for four years when he was invited to assume the direction of the Tipton Children’s Home.

While at Norman he became interested in a project to build a Christian College in Oklahoma, since the Cordell school had closed in 1931. The brethren at Pryor, Oklahoma had been approached by the city officials there, asking if they would be interested in building a Christian College in some war surplus buildings that were available there. There was much interest in it, especially in the Tulsa area, and a board was formed with Brother Fullerton as Chairman. After much study, it was decided that this property was not suitable for such a work, and consideration of it was dropped. However, so much interest had been generated,that he helped form a committee to look further into the matter. The present day wonderful school at Oklahoma City is the result of that effort. I served on that first board, and know from personal experience that he gave much time, effort, and wise counsel in the establishment of that school. (A few years before his death, Oklahoma Christian College appropriately presented him a plaque honoring his service to the school and his long years as an educator and preacher.) After he assumed the Tipton work he resigned from the College board, saying he would have to be involved in much fund raising at Tipton,and he feared a conflict of interest if he remained on the school board. He did remain a strong supporter of Christian education, and of Oklahoma Christian College in particular, to the end of his long life.

He spent almost ten years with the Tipton Home. Fire had destroyed much of the original property, and some surplus army barracks had been moved there to house the children. While he was there they raised and spent more than $300,000.00 for new construction, completely replacing all the barracks.

Following his work at Tipton he preached for some years for the churches in Marlow and Comanche, Oklahoma. The years were taking their toll, and he and Myrtle moved to Ada to be close to their Betty and her family. He continued to preach by appointment from Ada as long as he was physically able. On June 18, 1976 Myrtle went the way of all the earth. A little less than two years later, on April 24, 1978 he too was gathered to his fathers, and they sleep in the Ada cemetery. He attained the ripe age of eighty-eight years, thus gaining the promise made to children who are obedient to their parents. He was a good man. His life was well spent in the service of his Maker and his fellow man. Many will be able to live in heaven because of the life he lived.

-Loyd L. Smith, Gospel Preachers Of Yesteryear, pages 152-155. This piece was first published in the Christian Worker, September, 1978. It is a timed piece. Some mentioned as now living, may now be deceased.

Directions To The Grave of Byron Fullerton

Byron Fullerton is buried in the Memorial Park Cemetery on the west side of Ada, Oklahoma. Ada lies SE of Oklahoma City. From Oklahoma City, head south on I-35 and toward Paul's Valley. Take Exit 72, Hwy. 19, and turn east (left) and go through town. Stay on 19 for 36 miles, continuing west through Stratford, and just before getting into Ada, the cemetery will be on your right. Head through the entrance and take the first left. Head down around past the office, and continue toward the rear of the cemetery. From the office, go to the third turn on your right and stop. Look for the cross in Section 11. Head toward the cross, and the Fullerton monument is in the foreground in front of the cross. 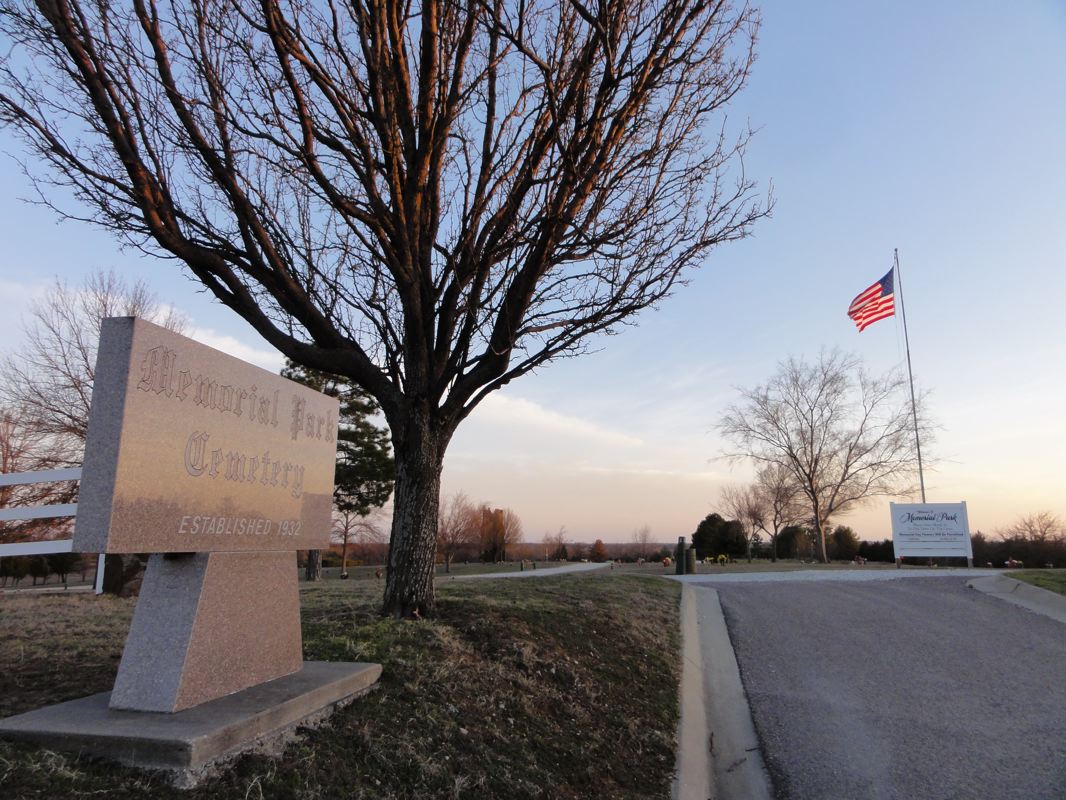 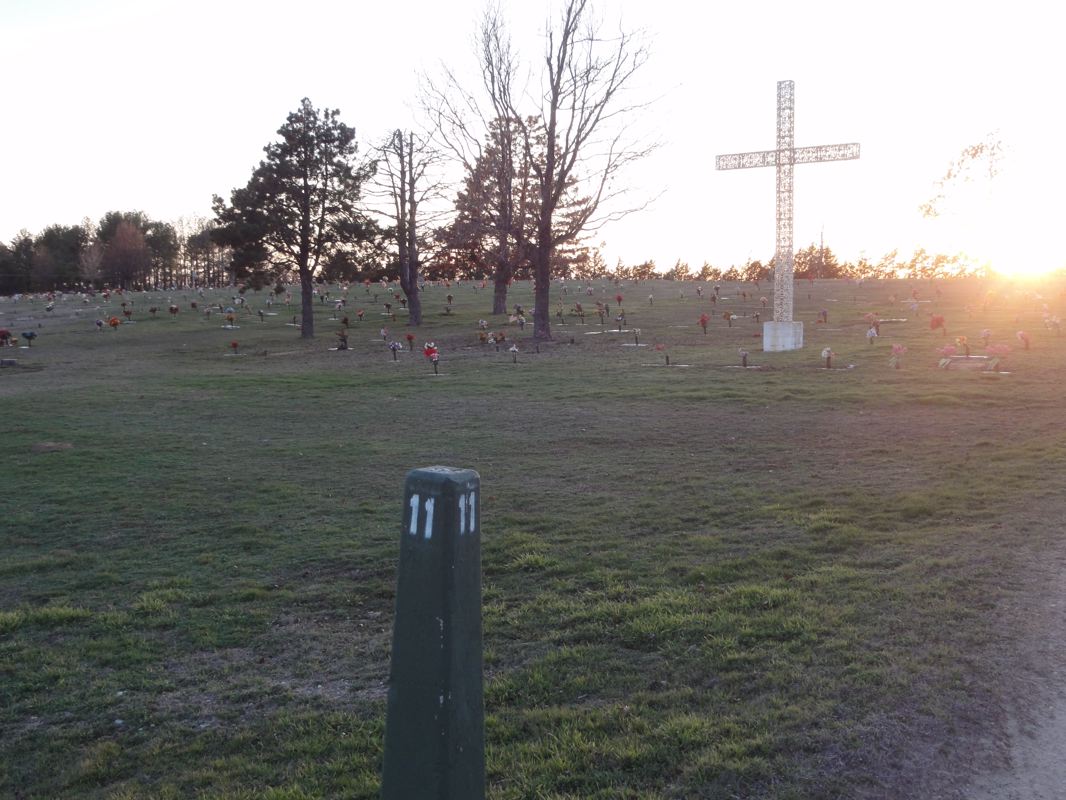 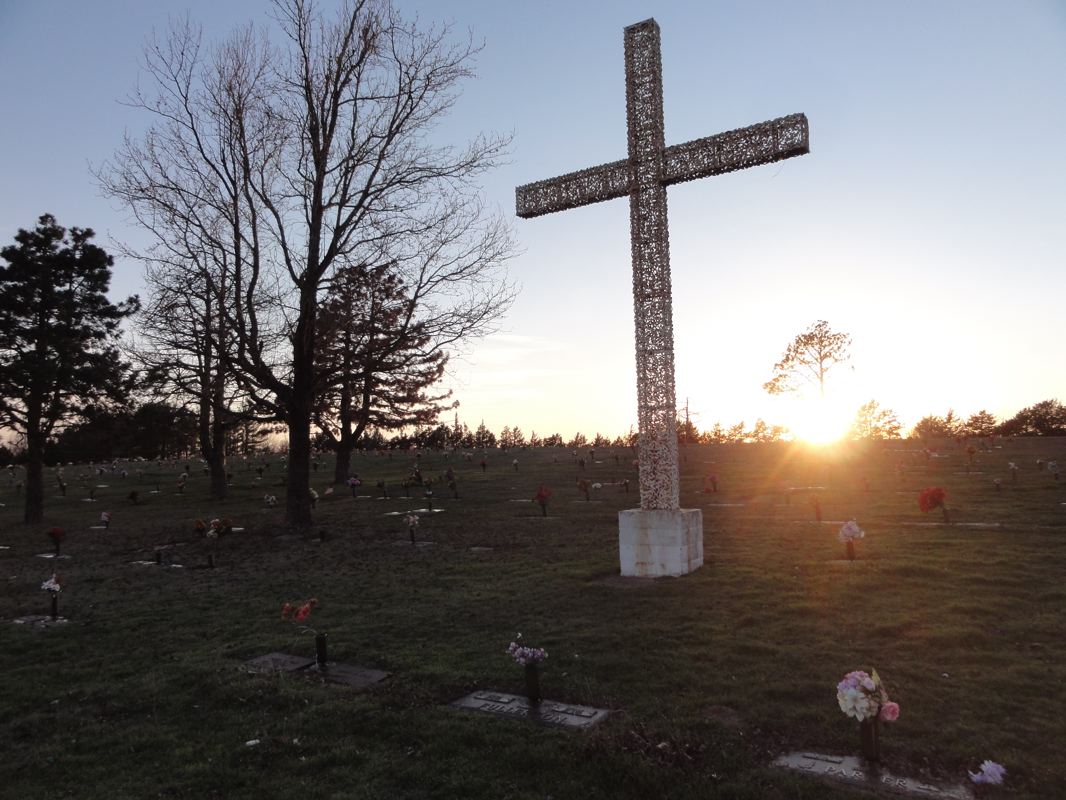 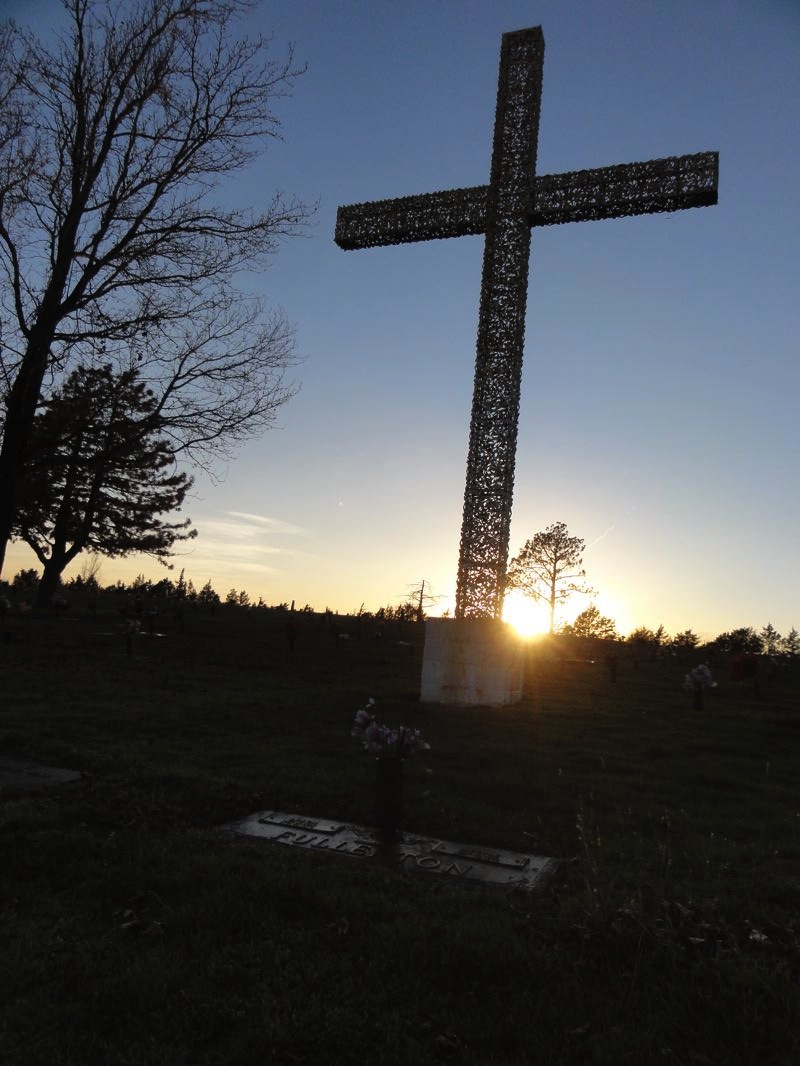 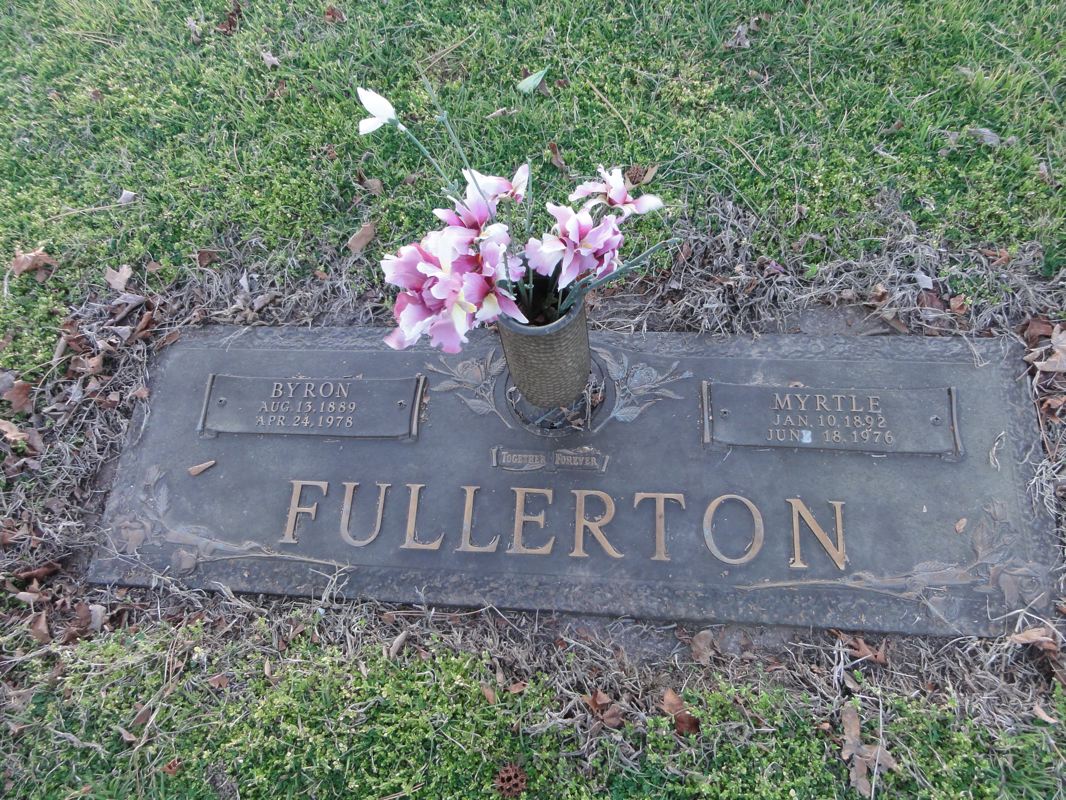 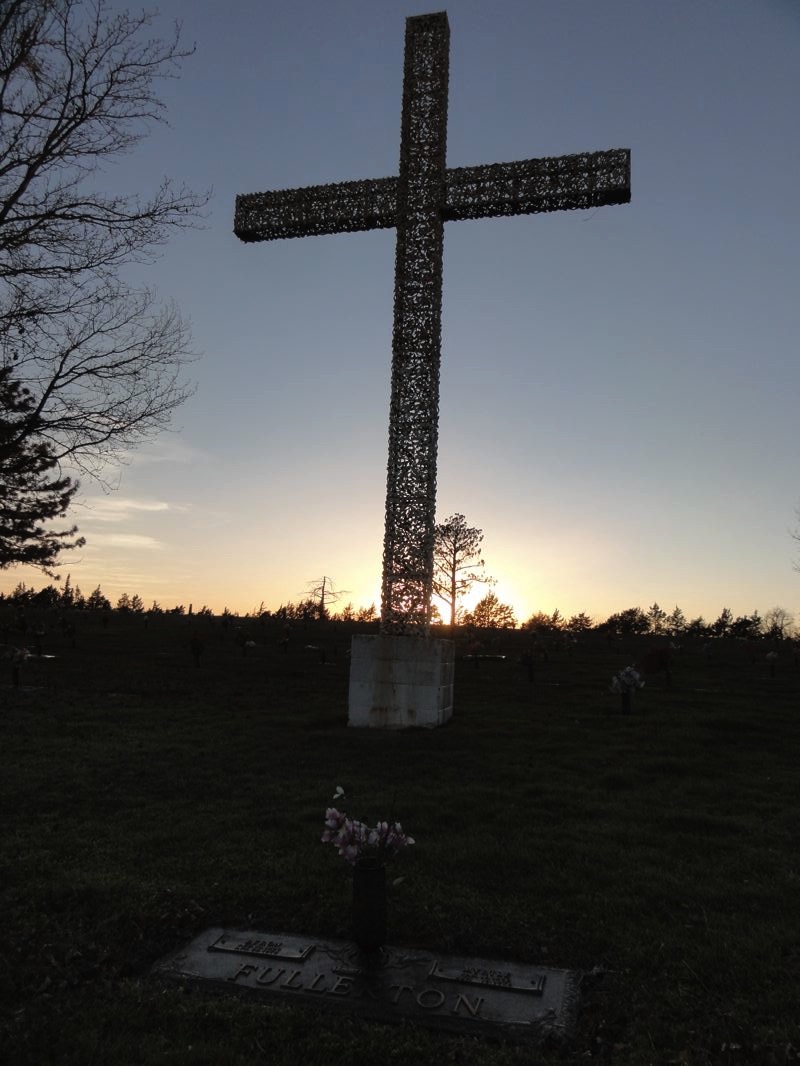 Web editor note: In February, 2012, it was my privilege to visit the grave of Byron Fullerton. I was invited to take part in the annual Affirming The Faith Lectureship in Oklahoma City, Oklahoma. Getting into the area early, I was afforded the opportunity to put about 2000 miles on a rental car in order to locate graves of gospel preachers and church leaders of yesteryear in a wide area. My fourth day I was able to visit the grave of Byron Fullerton.