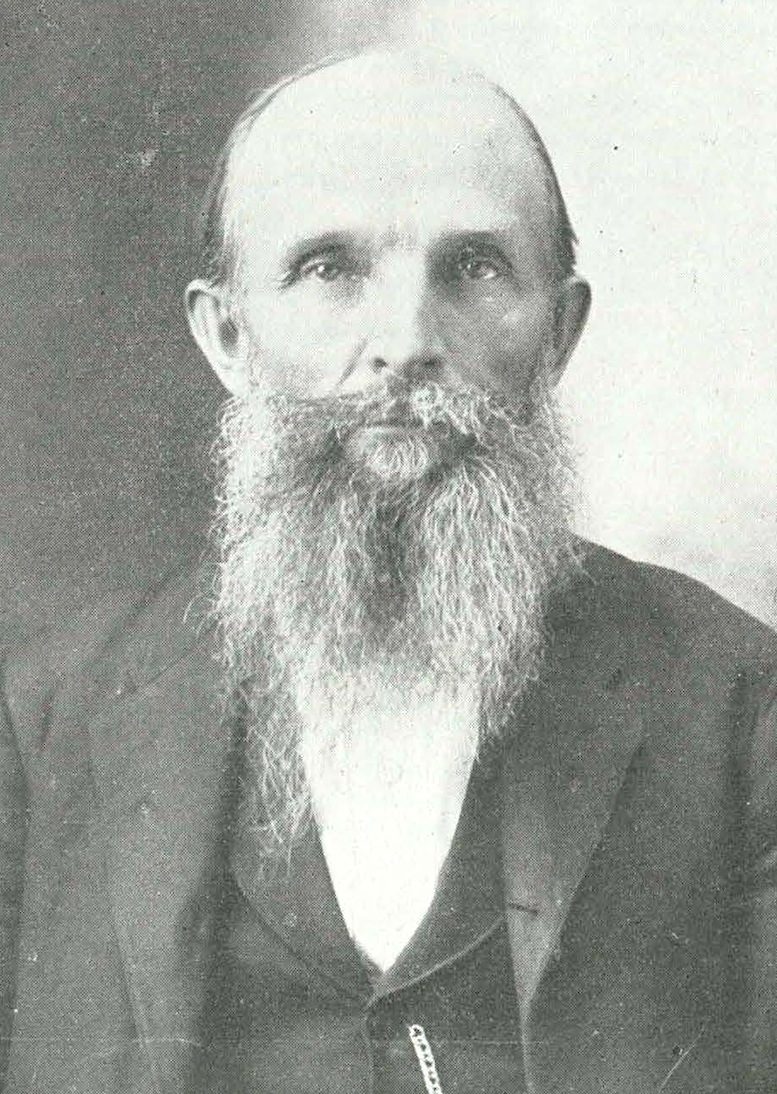 When God measures a man, he does not estimate the elements of greatness as does man. God does not measure the greatness of a man by his physical prowess, though this may be an asset to the man; neither does God take into account the wealth that one possesses, though one may use wealth to the honor and the glory of God; nor does God base his estimate upon man from the patriotism that is attributed to man, though a love of one's country may help one to be great; nor does God reckon only the intellectual powers of man, though these may help him fill his mission in an acceptable way. God's measure of greatness of anyone is based upon the service that one renders in the name of the Lord Jesus Christ. When measured according to this standard, R. L. Gillentine was a great man.

Richard Leek Gillentine was born in Van Buren County, Tennessee, not far from Spencer, January 28, 1852. He was the youngest child of " Squire" John Gillentine. His father was one of the first settlers of the historic little town of Spencer. He figured largely in the affairs of his county. John Gillentine served as a justice of the peace for many years and was chairman of the county court for a long period of time. He was one of the promoters of Burritt College and the first president of the board of trustees of that college. He was a publicepirited man and did much to promote the civic affairs of his town and county.

John Gillentine was reared in the Baptist faith. He belonged to that branch of the Baptists known in that country as "Hardshell Baptists." The Hardshell Baptist Church withdrew fellowship from him because he permitted the Separate Baptists to hold meetings in his house. After being dismissed from the Baptist Church he studied the Bible, and later became a member of the church of Christ. He reared his family in the fear of God and in the knowledge of his truth. The Gillentine family had left to it a rich legacy of a Christian father and mother.

Young Gillentine inherited a deeply pious nature and strong intellectual powers of mind. There were but few advantages for mental development and soul culture among the mountain people where he grew up. However, these mountain folk were richly endowed with the simple elements of frugal industry and honesty. They had their code of honor, and they strictly followed it. R. L. Gillentine was reared among the simple folk of that mountain country and attended the schools of his county. His education was attained under great difficulty. His school days were interrupted much by nonattendance. He seldom had the advantage of more than three months of schooling at a time. He was eleven years old when the Civil War began. This deprived him of many school advantages. During the war he moved to Monroe County, Kentucky, and there attended school for two short terms. One of his teachers was William Sewell, a brother of the justly famous and lamented E. G. Sewell. In 1869 his father died, leaving the responsibility of caring for his mother and sisters upon his shoulders. He was seventeen years old when his father died, and the responsibilities of providing for the family were so great upon him that he never had an opportunity of attending school any more. No one is to infer from this that Brother Gillentine was an uneducated man. He was well informed and could discourse in conversation intelligently and profitably upon any topic of the day.

Brother Gillentine became a Christian in early life. His was a rich, pious nature, and the stories revealed in the Bible made profound impressions on his heart and helped to mold and direct his life. While a child he often wept at hearing told the stories of the Bible, and especially the suffering of our Savior. Many times when he would hear read the New Testament, describing the sufferings and death of Jesus, he would go off in a secluded place and weep. His heart was kept tender by the memory of the sufferings of his Lord. He became familiar with the Bible and delighted in the study of the word of God. We may know that one who was so deeply impressed with the truth of God and one who had a tender conscience could not refrain from telling the old story of the cross with pathos and power.

Brother Gillentine began preaching in his early twenties and continued throughout his life. There was a great need for preachers in that mountain country at that time, and Brother Gillentine met in a large measure the needs of his countrymen. He loved the truth of God and loved to preach the gospel. There is not a precinct in that mountain country that he did not visit and proclaim the gospel as God's power to save. He rode horseback thousands of miles and taught the people the plan of salvation and encouraged them to accept it. He taught God's people the way of the Lord more perfectly. He was a lover of peace and preached Jesus as the Prince of Peace. His labors were not confined to the sequestered county of Van Buren, but his labors extended into Warren, De Kalb, Bledsoe, Overton, and Sequatchie counties, all in Tennessee. He preached extensively in Kentucky, Mississippi, Alabama, Texas, New Mexico, and Oklahoma. No preacher could preach the gospel with more clearness and tender pathos than could R. L. Gillentine. Often while preaching tears flowed down his cheeks and his hearers were moved to weeping. Few preachers could excel him in warm, fervent, earnest exhortation; and these appeals to aliens to obey the gospel were almost irresistible. He moved thousands of people to accept Christ by his simple, eloquent exhortations.

In 1910 he moved from Spencer to, Hollis, Okla. His family had been reared at Spencer, and all of them had been educated in Burritt College. He had been one of the elders of the church at Spencer for many years, and through his efforts and guidance the church filled its mission well. Through his influence and teaching the entire citizenry of Spencer were either members of the church of Christ or very favorably inclined to it. So strong was the influence of the church at Spencer under his guidance that no denomination could get a foothold in the town. After moving to Oklahoma, he located on a farm and preached much of his time. The last years of his life he gave all that he received for preaching to other preachers to work in destitute places.

Brother Gillentine died on January 29, 1920, at his home in Hollis. He was sixty-eight years and one day old when he died, No man has served his fellow man and honored God in his service more than R. L. Gillentine. He sacrificed much for the cause of Christ and rendered loving service in his name unto the journey's end.

Obituary In The Gospel Advocate

I am sure there were many hearts made sad and many tear-dimmed eyes caused by the death of Brother R. L. Gillentine, in Oklahoma, on January 30, 1920. Cousin Richard will never die in the hearts of those who knew and loved him, and these are legion. He has simply fallen asleep in Jesus, to awake in that grand, glorious resurrection morn and ascend with Jesus to that celestial city. Cousin Richard not only rode all up and down the hills and hollows, the mountains and valleys of Middle Tennessee, preaching the old, old story, visiting the sick and dying, but he reared a fine family of intelligent, noblehearted, Christian boys and girls. His daughters are not only talented and accomplished; they are pure, true, sweet, modest, womanly Christians, like their good mother. Besides preaching, Cousin Richard was a good man and given to hospitality, even to Mormons, although he let them understand he was entertaining them because they were human beings, and not because they were Mormons. He was an elder in the church at Spencer, Tenn., and one of the directors of Burritt College.

Directions To The Grave of R.L. Gillentine

The town of Hollis, Oklahoma lies in the most western part of that state, near the Texas Panhandle. If traveling from I-40, take Exit 7 in Erick and head south on Hwy 30. about 40 miles. In downtown Hollis turn left on West Broadway (Hwy. 62). Then turn left on S. Northwestside Road. The cemetery will be about a mile on the left. Turn left in the last entrance into the cemetery on your left. Then turn right immediately and head to the end of the cemetery and turn left. Go up about midway and stop the car. The Brecheen plot will be next to the drive. Go to the second turn to the right. The Gillentine plot is the left in the front, in the center of the section. Plot Info: Section 3, Row 5. If visiting the cemetery, be sure to go by and visit the grave of another gospel preacher buried there, Earl R. Brecheen. 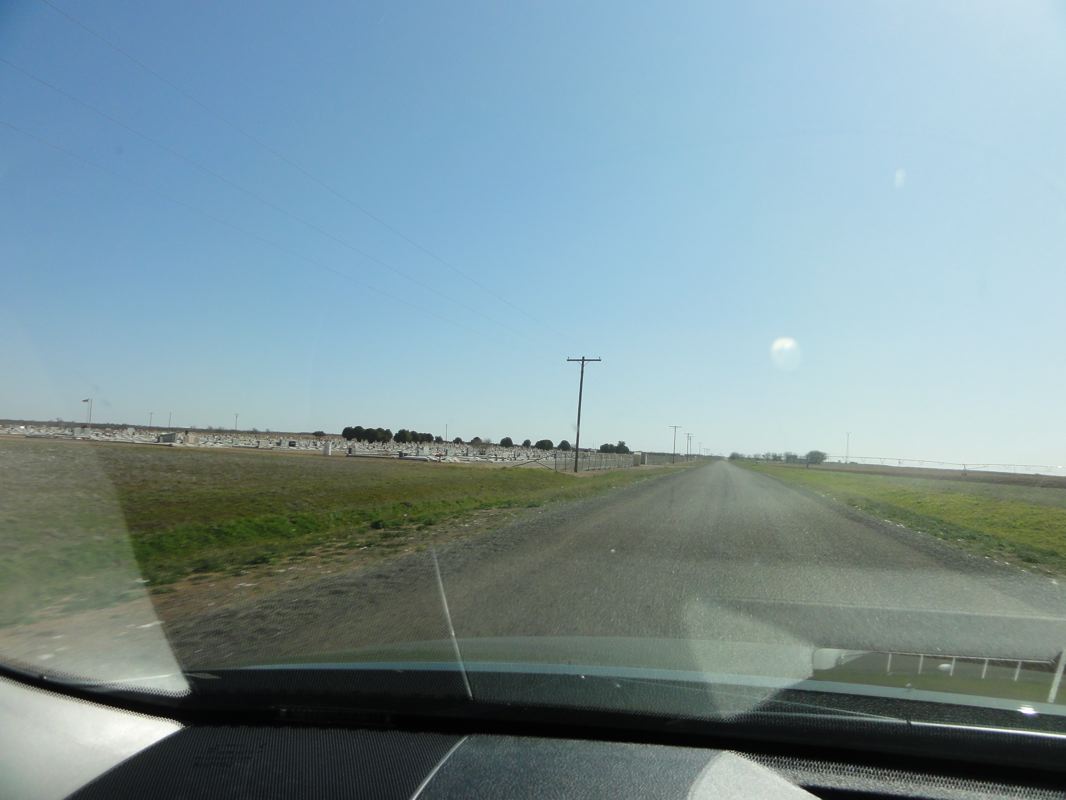 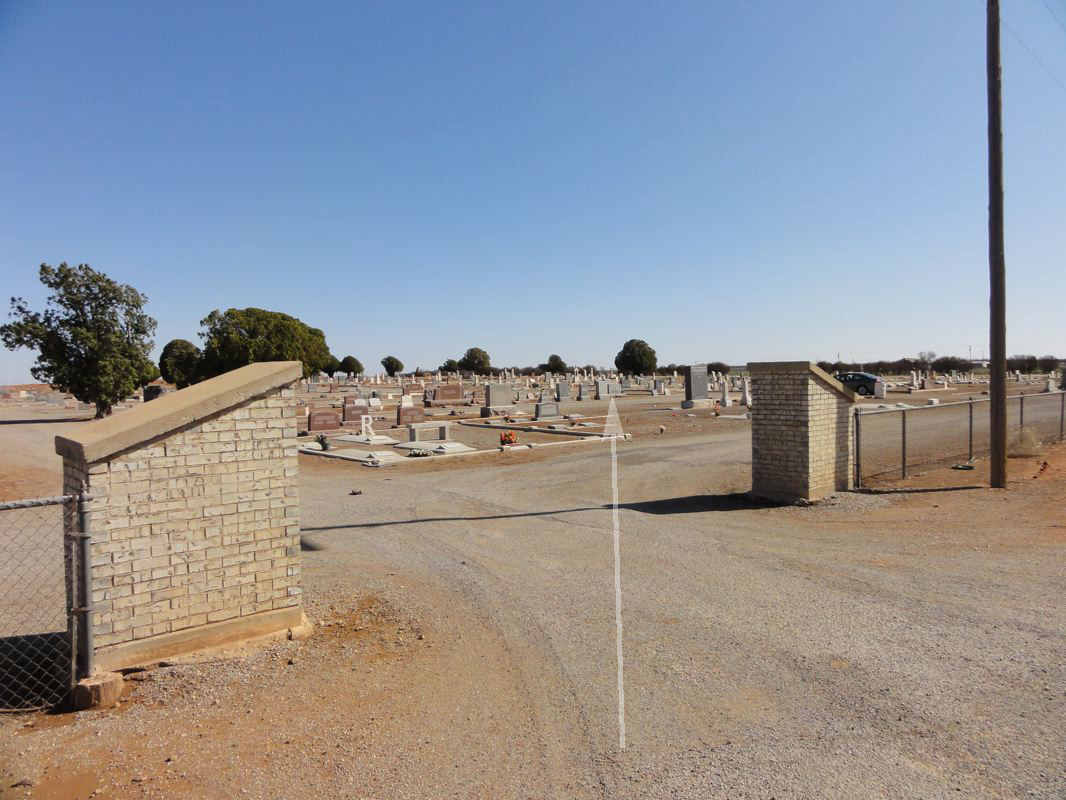 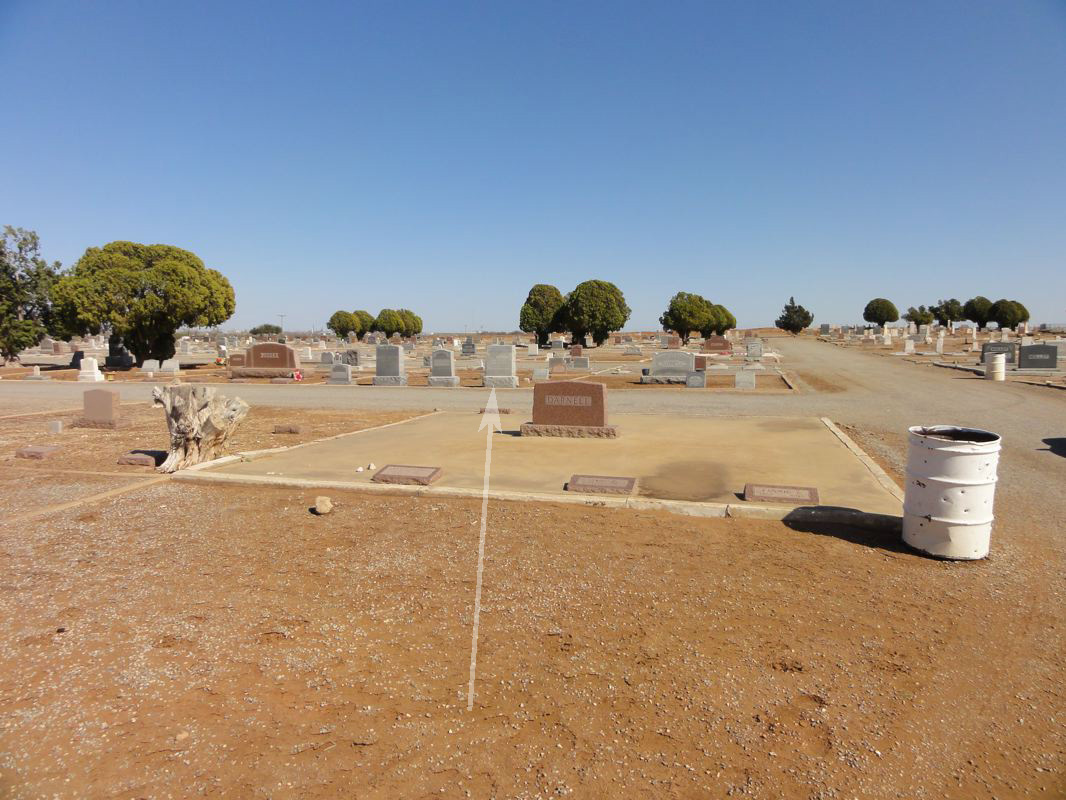 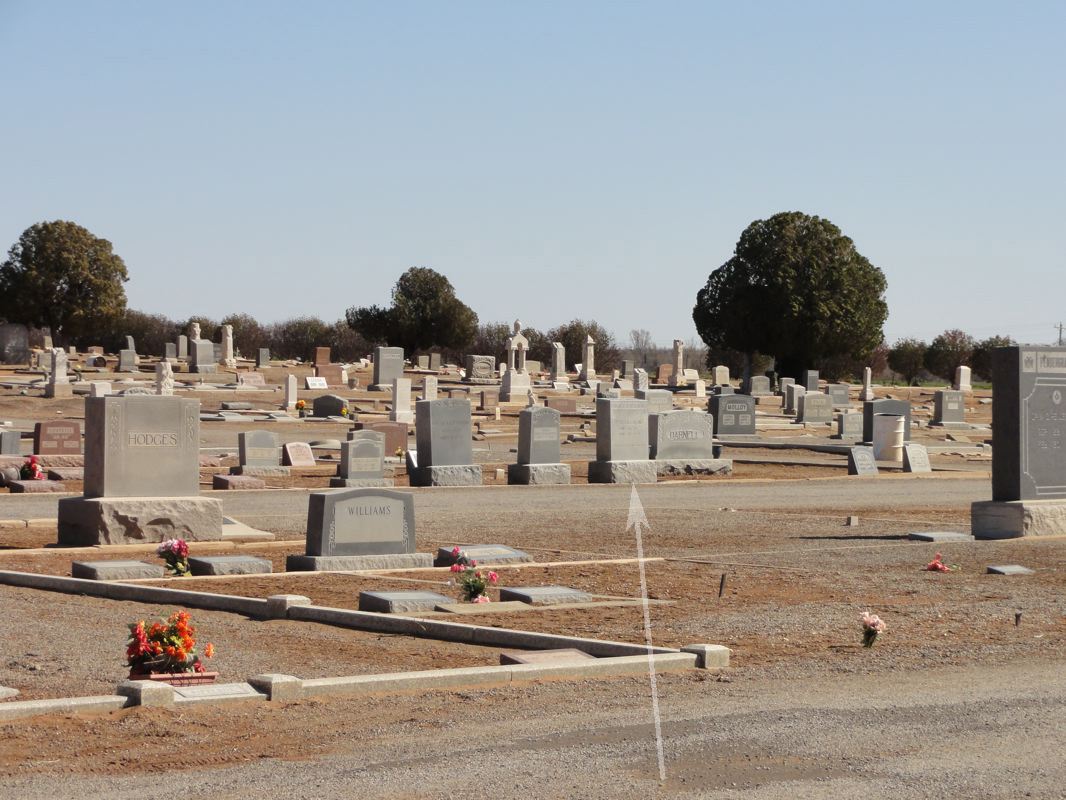 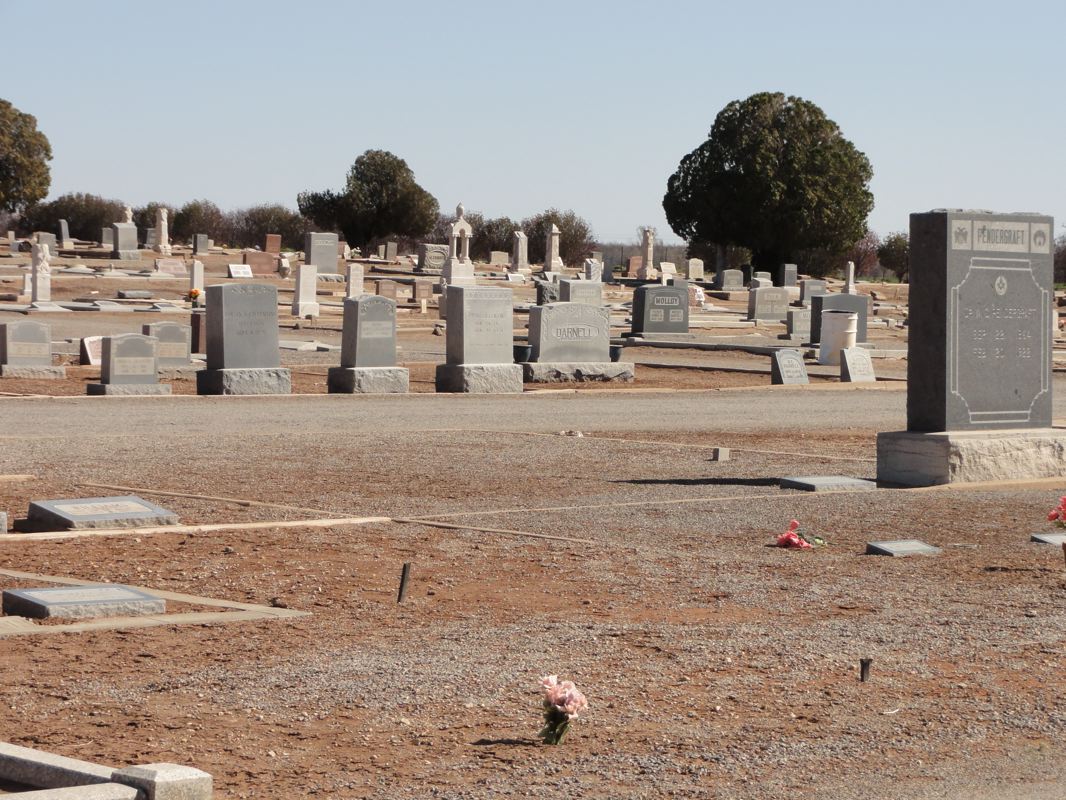 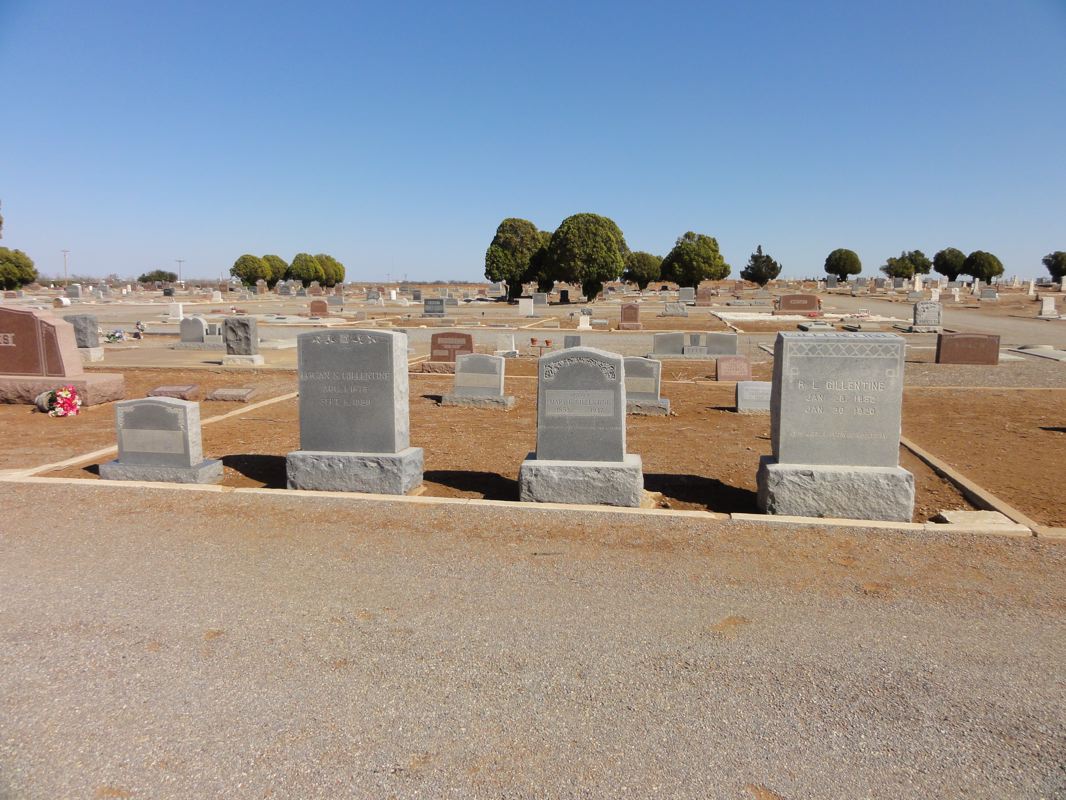 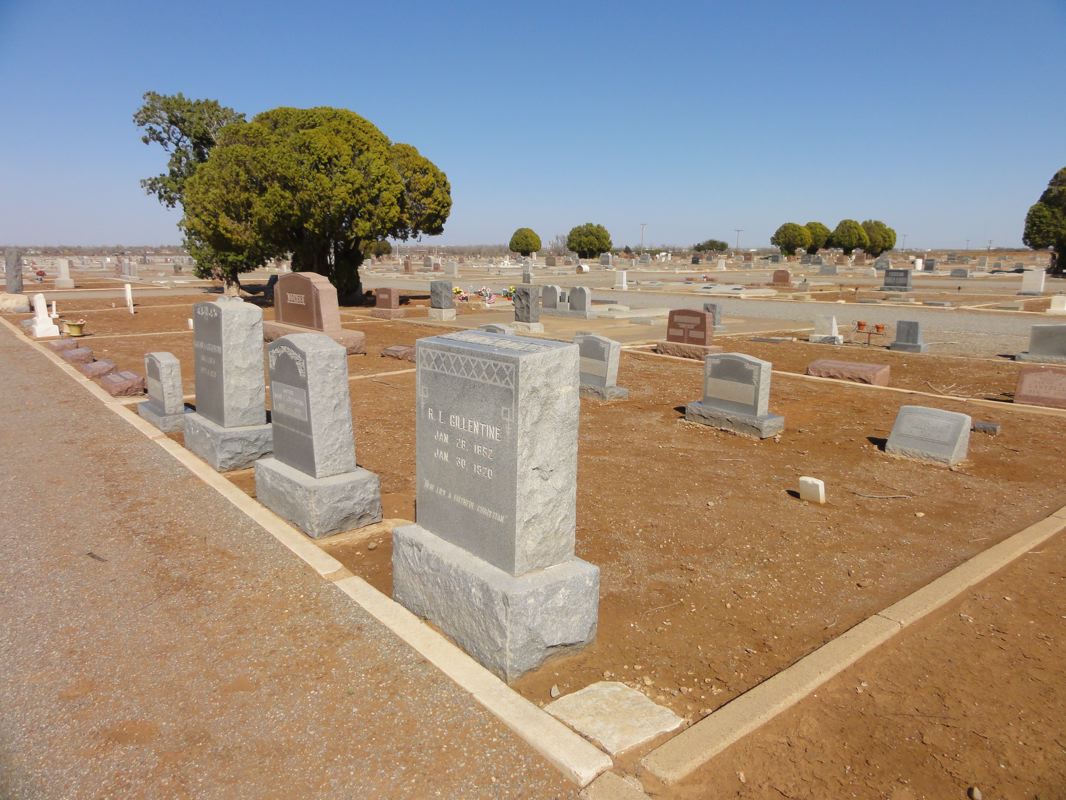 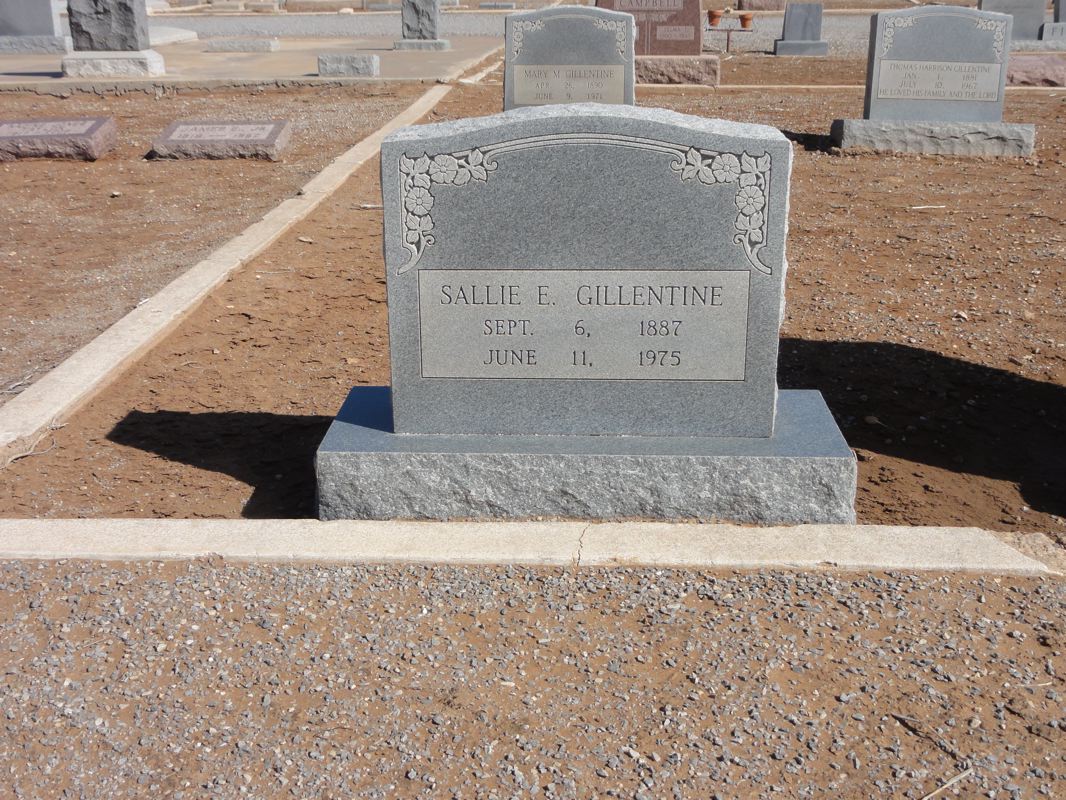 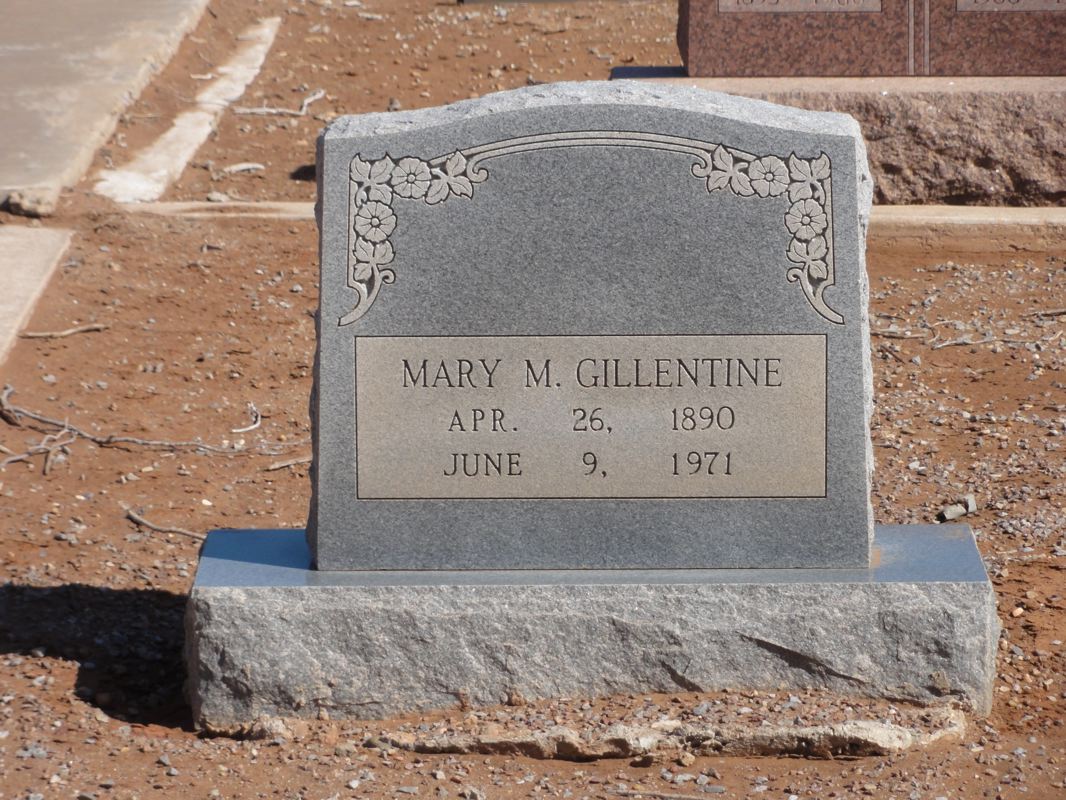 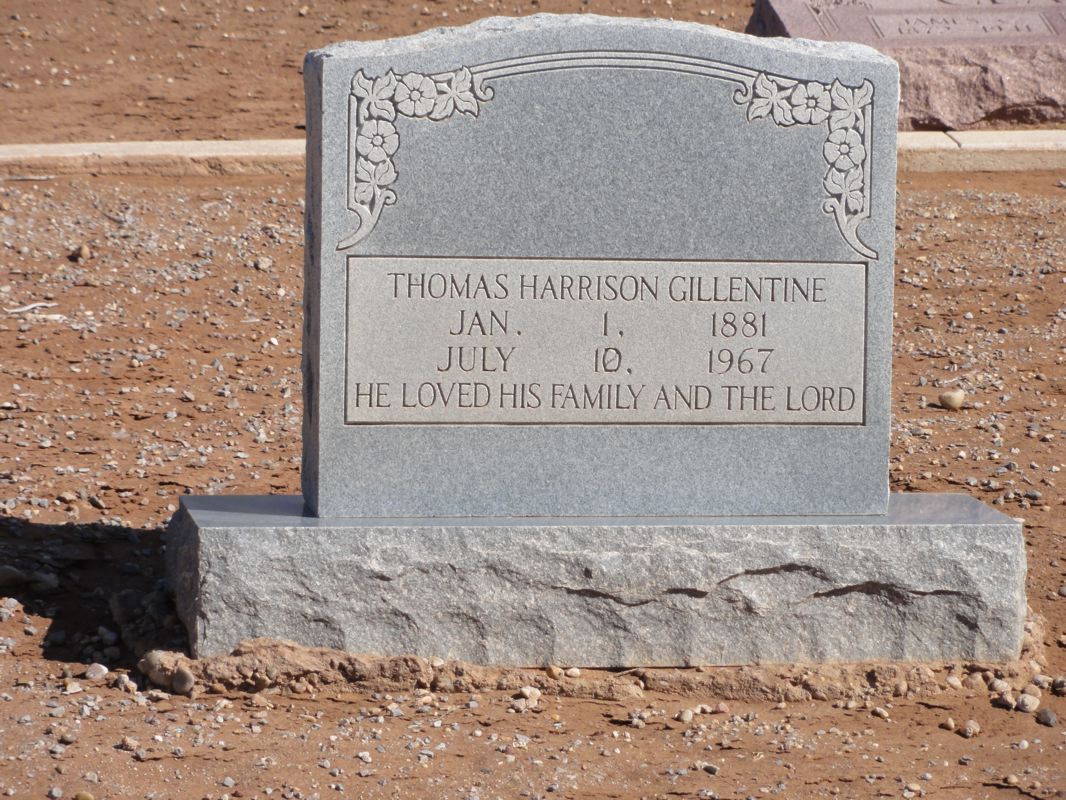 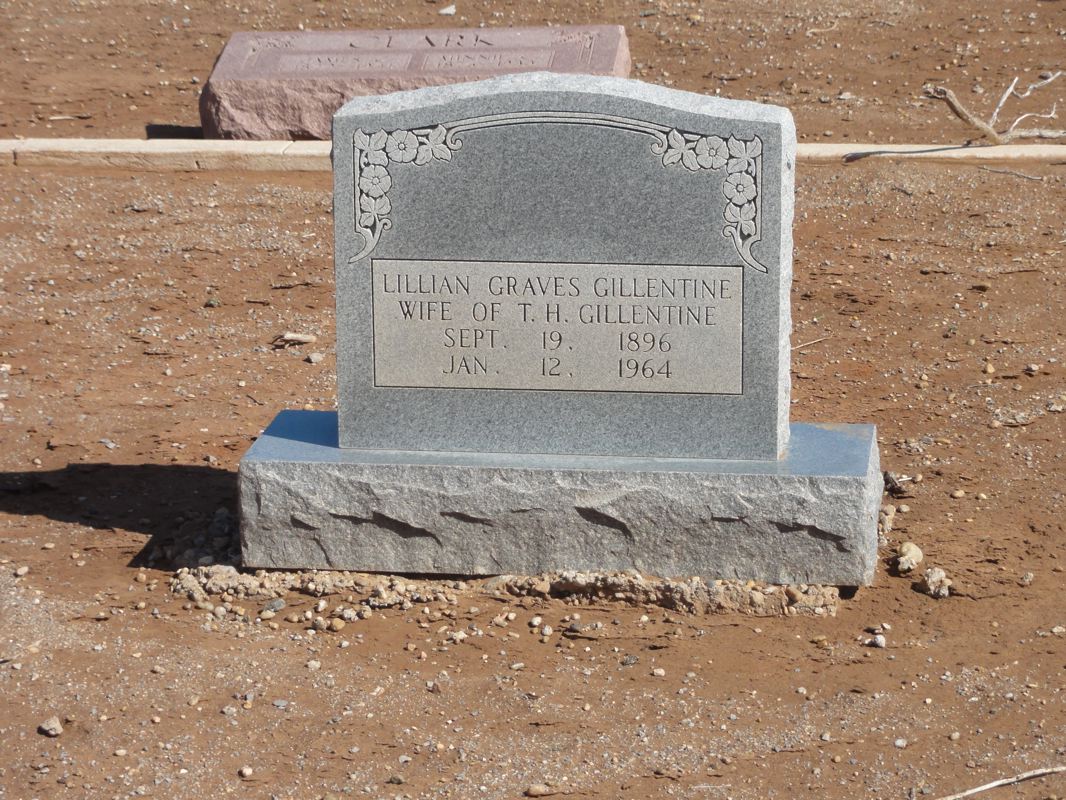 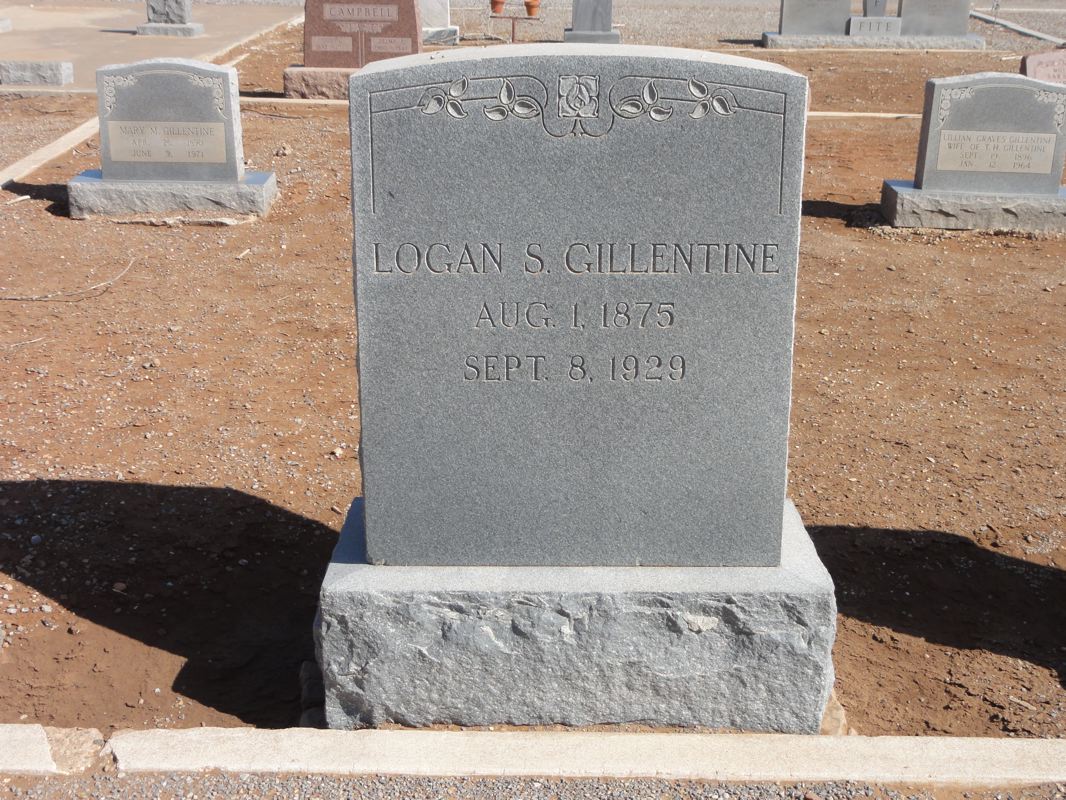 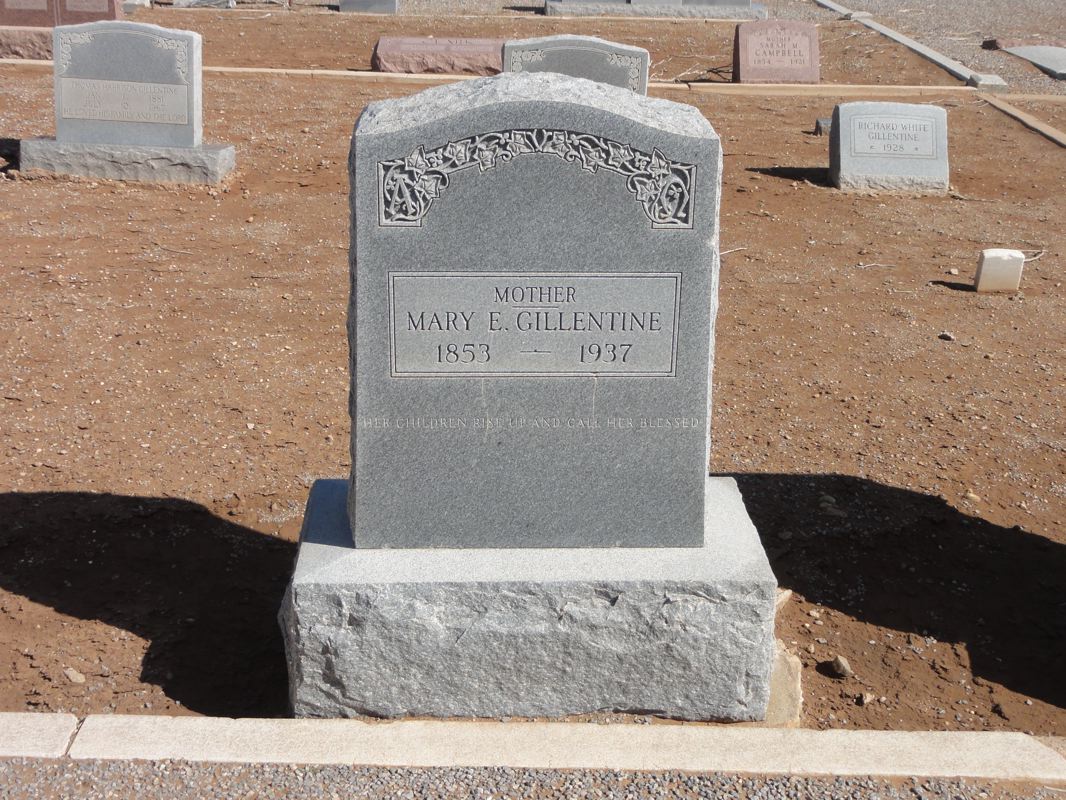 Mother
Mary E. Gillentine
1853-1937
Her Children Rise Up And Call You Blessed 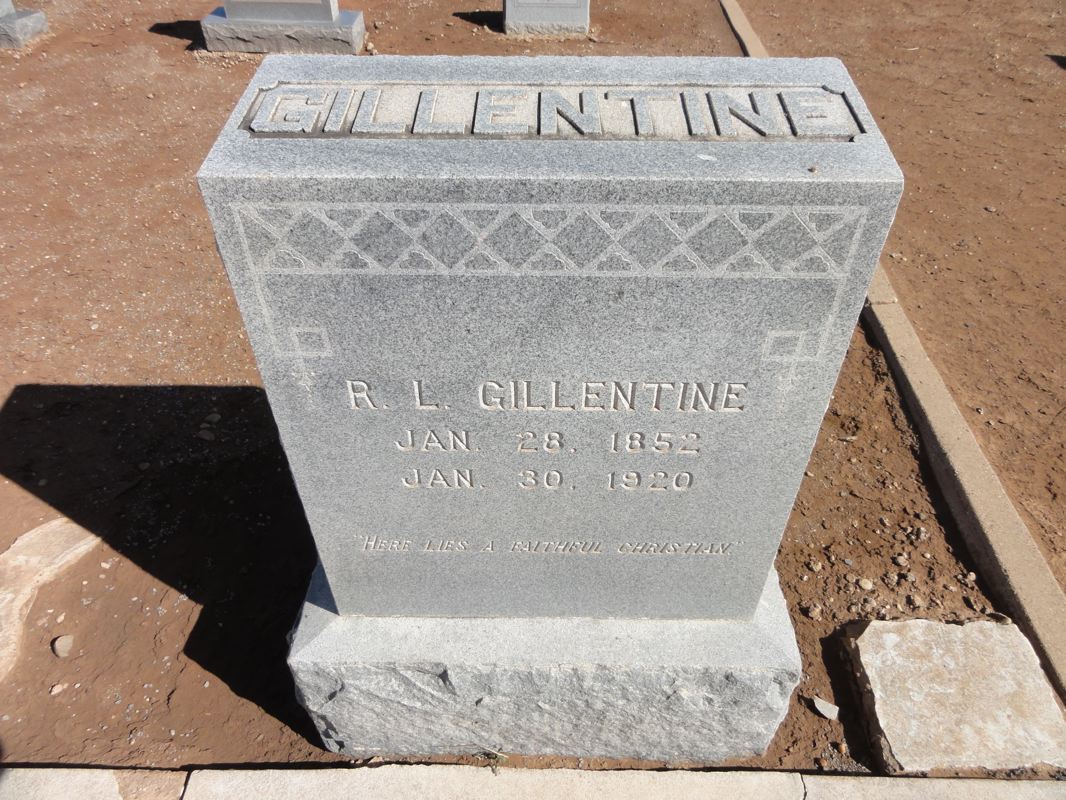 Web editor note: In February, 2012, it was my privilege to visit the grave of R.L. Gillentine. I was invited to take part in the annual Affirming The Faith Lectureship in Oklahoma City, Oklahoma. Getting into the area early, I was afforded the opportunity to put about 2000 miles on a rental car in order to locate graves of gospel preachers and church leaders of yesteryear in a wide area. My second day I was able to visit the grave of R.L. Gillentine. If visiting the cemetery, be sure to go by and visit the grave of another gospel preacher buried there, Earl R. Brecheen.