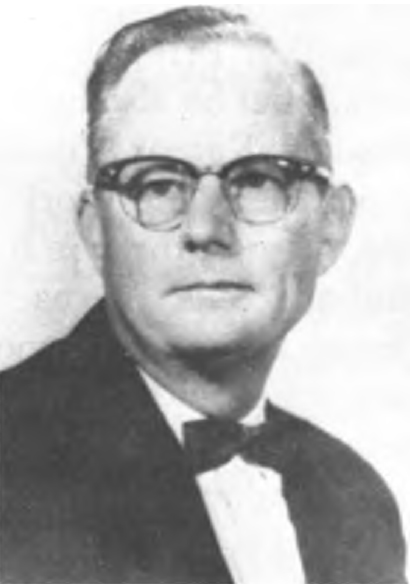 Clarence Arthur Price, faithful gospel preacher, and the father of three fine, faithful sons, two of whom are engaged in full-time preaching work and the other faithfully active in the Wylie, Texas church, and preaching from time to time as needed, was born October 12, 1912 in Fulton County, Arkansas near Blackwater, Missouri.

His parents were Mr. and Mrs. Joe D. Price, faithful Christians. Clarence A. was one of four sons and three daughters born to them, all of whom have been faithful to The Lord. Having been brought up in a Christian home he “remembered his Creator in the days of his youth,” obeying the gospel under the preaching of a brother Cameron in 1927, his fifteenth year, at Blackwater, Missouri. He attended the public schools on both sides of the Arkansas-Missouri line, completing his high school work in Blackwater. He attended Abilene Christian University two and a half years, and a “preacher training school” conducted by the Blackwater Church. The Church has long been a powerful force for good in the area where he grew up, and the many faithful preachers. Perhaps it was “natural” that he should have early been filled with the desire to give his life to this great work. We do not have a record of where he preached his first sermon, nor of how many congregations he helped establish or how many he baptized. (This might help some of you men now preaching to see the importance of keeping such records and making sure that someone can find them when you are gone. A mid- dle-aged preacher recently said to me, after he had worked on this kind of material about his own father, that he was going to write a complete story of his life. A good idea!)

On November 24, 1934 he was married to Miss Naomi Irene McMullin, daughter of Mr. and Mrs. E.D. McMullin, of Blackwater and Sedalia, Missouri. They were married in Columbia, Missouri by Herbert Grant. She had been reared in a Baptist home, but had never joined that church. Three sons were born to them. They are: Jerry A. Price and Wayne Price, both gospel preachers; and Larry G. Price, of Wylie, Texas, an Engineer for the A. Harris Corp., of Dallas, Texas. If nothing more could be said of Brother Price, the three sons he reared speak volumes of good for him and his companion.

Brother Price spent most of his life in what we call “local work,” but he also held many meetings, his work taking him into Missouri, Kansas, Texas, Arkansas, California and Oklahoma. He helped start The Work in Sedalia and Nevada, Missouri. In Parsons, Kansas, three in Bryson, Texas, about five in Waco, three in Mineral Wells, five each in Valley Mills and Wills Point and Mt. Vernon. Three were spent in Texarkana, all in Texas. Four years were spent with the Chillicothe church, his last work. Through these years he did the work preachers usually do. He held meetings, conducted funerals and weddings, preached at least twice each week and taught many Bible classes, and of course did the studying required for this load of work. He sometimes contributed timely articles to the local papers, and to such “church papers” as this one, at first published in Wichita, Kansas; to the Firm Foundation, etc. He prepared a commentary on the book of Revelation, which he used in class work. It was never published, but is available in typed form from Sister Price. In the early years of his preaching it was often necessary to supplement his income by secular work, and for the six years he worked in Sedalia, Missouri, he worked as a meat cutter. In Nevada he followed the same trade, working for the Safeway store.

In 1930 he began preaching and for half a century proclaimed the unsearchable riches of Christ. In November, 1979, while working with The Church in Chillicothe, Texas, he suffered several strokes. These soon became quite serious, also causing other complications. He had been able to carry on his regular work, in fact he made some hospital calls the very day he suffered the first stroke. He was taken to the hospital in nearby Altus, Oklahoma, where their son, Wayne, had once preached for the Hudson and Elm Street church. Here, on January 19, 1980, The Lord saw fit to terminate his work on earth. Final services were conducted in the Chillicothe meeting house by J.B. Lamb, of the Quanah church; Bill Osborn, of the Altus church, and Byron Denman, of Lawton. His body was taken to Duncan, Oklahoma for burial, and there sleeps to await the “trumpet sound.” Sister Price lives at 1309 N. 19th St. in Duncan 73533 (Mar., 1984). She is in good health and is active in the work of the Northside church in Duncan. No doubt she would enjoy a note from those of you who have known and worked with them in years past, for hers is a lonely place.

His son, Wayne, wrote of him soon after his death: “a proud moment in Dad’s life occurred about one year ago when all three of his sons, along with Dad himself, were preaching from four different pulpits at the same hour on a given Lord’s Day morning.”

“Serving others was his life’s work! “. . .not looking each of you to his own things, but each of you also to the things of others.” (Phil. 2:3) well describes his role in life. A more selfless person cannot be found. In fact, the very day he suffered his first stroke, he had been to the local hospital, visiting the ill there, not realizing that he himself would soon join them in their suffering.”

“He has known many joys in this great work of preaching the gospel. Many shall walk through heavens portals because of his concern for their souls — a concern that moved him to teach them about Christ (Acts 8:12-35). In addition to the many joys that accompany the preaching of the truth, he has also known what it was like to be “in perils among false brethren” (II Cor. 11:26). Yet he was not to be deterred from his life’s work, for his attitude was the same as Paul’s: “. . .woe is unto me, if I preach not the gospel” (I Cor. 9:16).

As we have already pointed out, the kind of sons he produced speaks more eloquently of this good man than anything I could say, for they are the living proof of what he was. Truly, as was stated at the funeral, “. . .he being dead, yet speaketh.” We shall see him again!

Directions To The Grave of C.A. Price

Clarence A. Price is buried in the Duncan Cemetery in Duncan, Oklahoma. Duncan is located SW of Oklahoma City on Hwy. 81. Head SW on I-44 (Note: This is a toll road. Be sure to bring change with you) to Chickasha, and take Hwy. 81 south. Go through Rush Springs, Marlow and Duncan. A few blocks south of Main Street, you will turn right on Cypress Ave. This road will lead you to the entrance of the Duncan Cemetery. As you enter the cemetery, take the sixth road to the right (1st road is just inside entrance). Head toward the rear of the cemetery. When you come to a round-about go through and continue through one more section and turn left. The Price plot will be on your left, close to the road in Block 44, Lot 10. While in the cemetery, be sure to go by and visit the grave of T.B. Wilkinson, located in Block 32, Lot 41 back near the entrance. 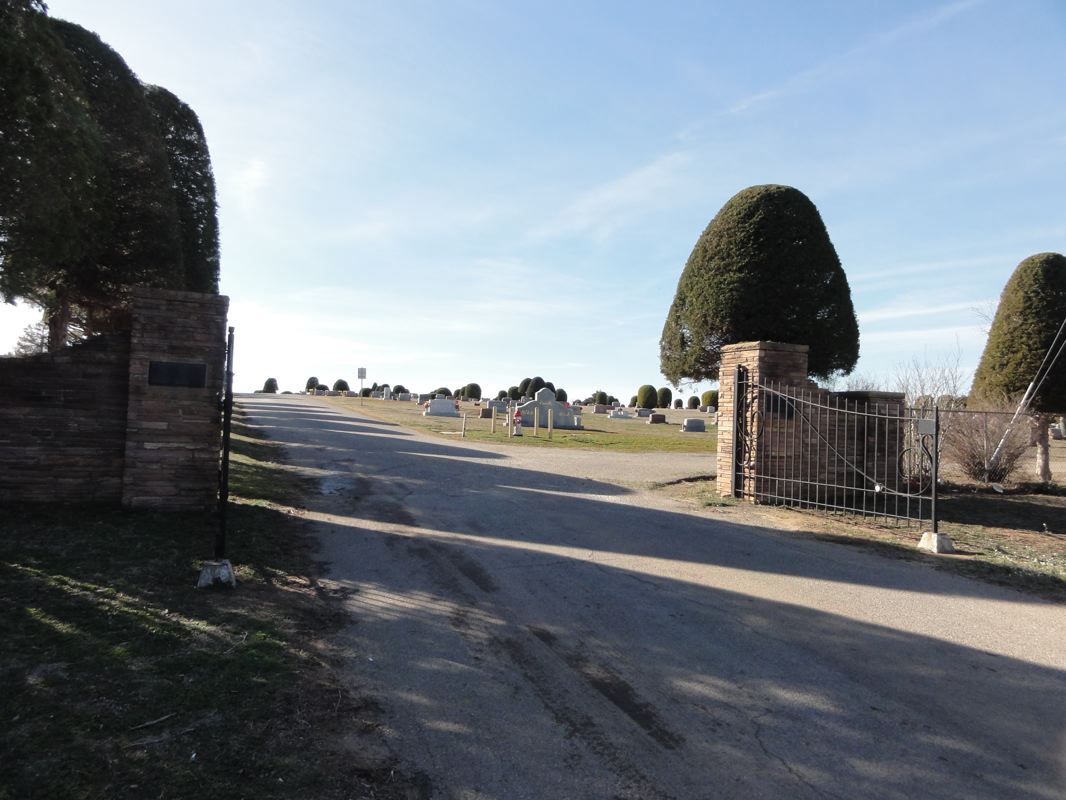 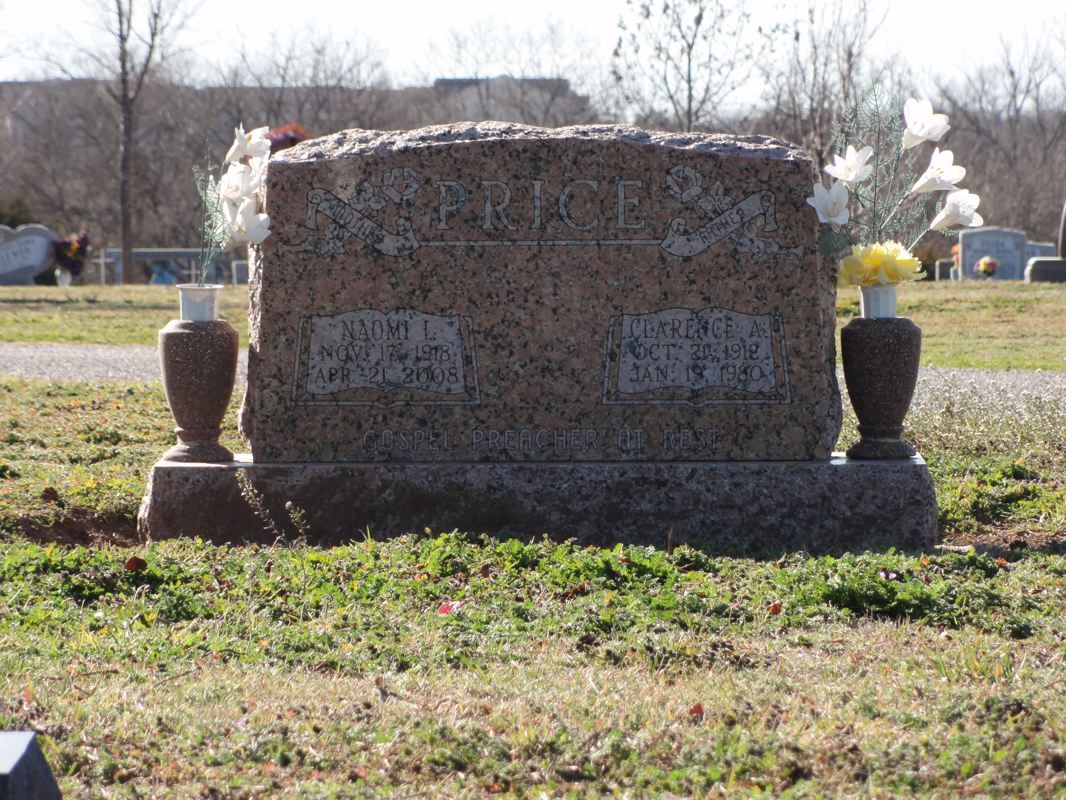 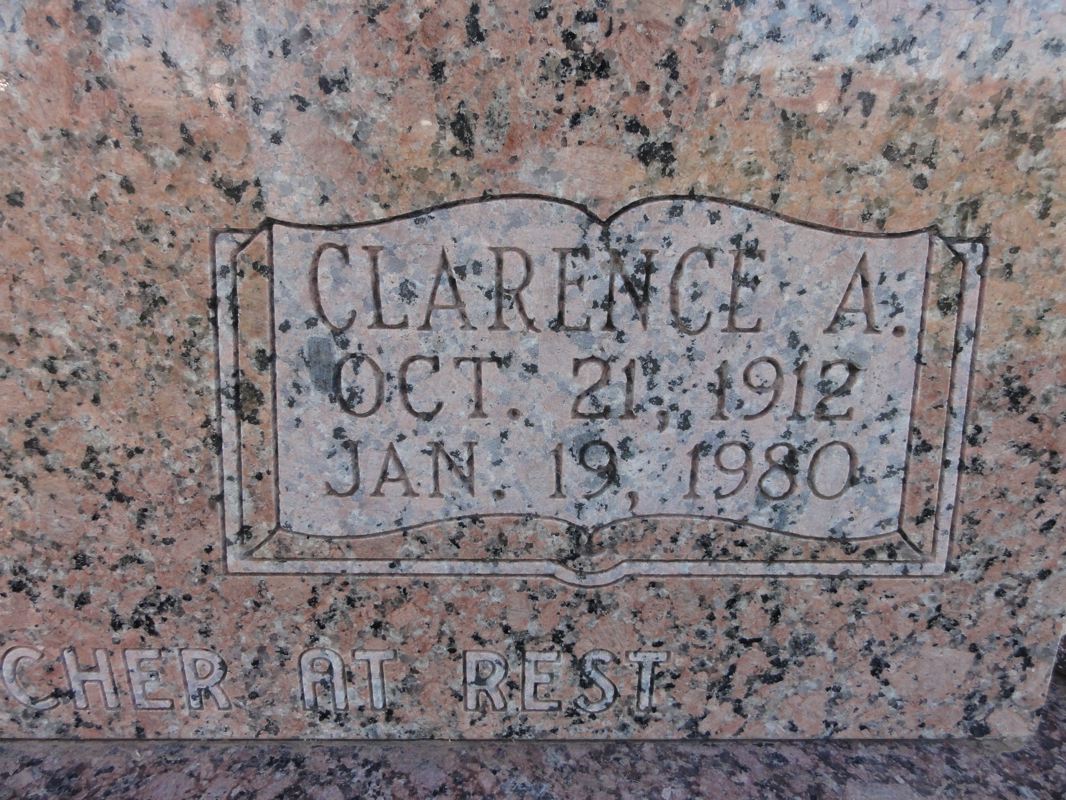