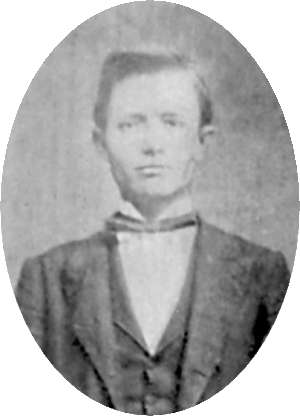 Thomas Benton Wilkinson was born in Montague County, Texas, May 18, 1875. He moved to the Oklahoma Territory at a young age. It is unclear as to when he obeyed the gospel, however it would appear that he was introduced to the first century model in his early days. Both he and his brother, U.G. Wilkinson, were gospel preachers, both settling within a few miles of on another in Oklahoma. Thomas married Rosa Coffman on May 1, 1900. To them were born eleven children.

Most of Thomas' working life was preaching in Duncan, Oklahoma. He help nurture the church of Christ there for forty years. He supported himself working in the court system in the county, serving some years as a court clerk. From 1943 he also served as a justice of the peace. He passed from this life at the age of seventy years on the evening of March 25, 1946. His remains were laid to rest in the Duncan Cemetery. He was recognized far and wide as a gospel preacher, a debater, and a promoter of the church of the New Testament. 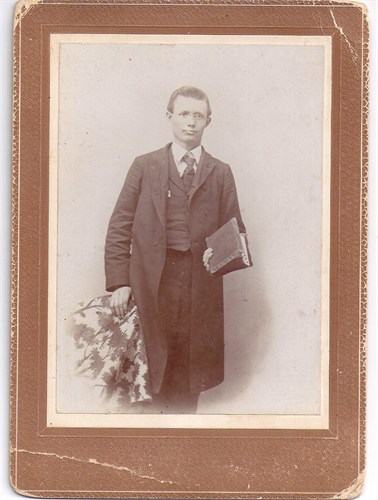 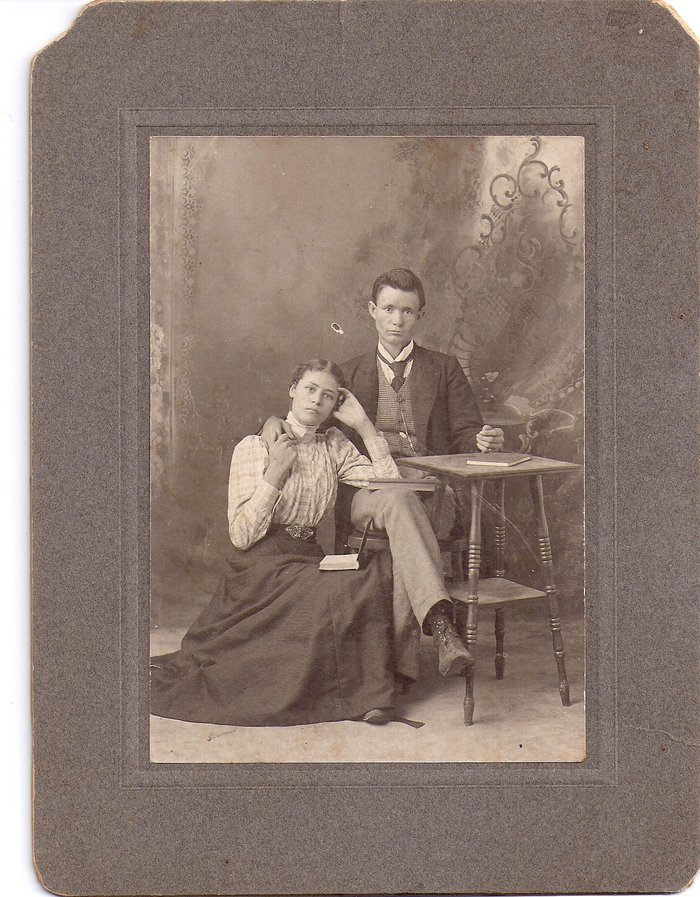 Thomas B. Wilkinson, 70, justice of the peace and pioneer resident of Stephens county, died at 11:27pm Monday night at his home, 1014 Elm. He had been ill for the past weeks.

Born in Montague county, Texas, May 18, 1875, Wilkinson married Miss Rosa Coffman May, 1, 1900. They moved to this county before statehood, living here since that time.

Wilkinson was court clerk under the first county judge of Stephens county. An active Church of Christ minister for about 40 years he had served as justice of the peace in Duncan since 1943.

Wilkinson recently finished writing a book that is being published at present.

The funeral service will be conducted in the Church of Christ at 2:30 p.m. tomorrow with A.L. Harbin and Joe Laird, ministers, officiating. Burial will be in the Duncan Cemetery under the direction of the Rengeley-Holden Funeral Home.

The Inspirational Works Of T.B. Wilkinson 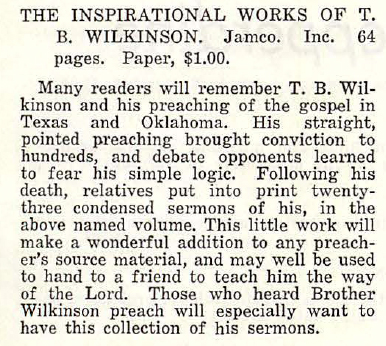 The Inspirational Works Of T.B. Wilkinson 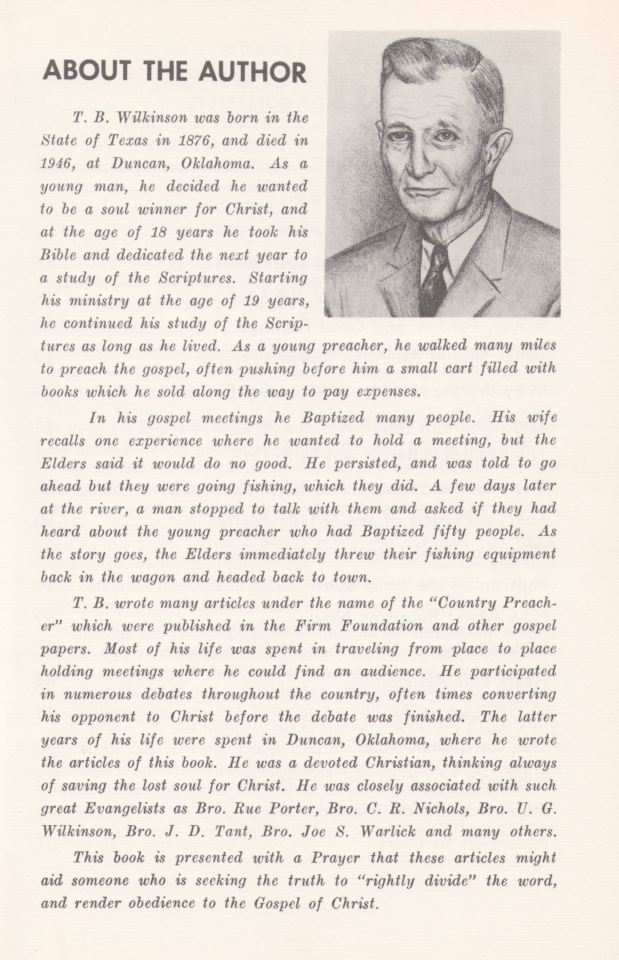 About The Author
transciption of above

T. B. Wilkinson was born in the State of Texas in 1876, and died in 1946, at Duncan, Oklahoma. As a young man, he decided he wanted to be a soul winner for Christ, and at the age of 18 years he took his Bible and dedicated the next year to a study of the Scriptures. Starting his ministry at the age of 19 years, he continued his study of the Scriptures as long as he lived. As a young preacher, he walked many miles to preach the gospel, often pushing before him a small cart filled with books which he sold along the way to pay expenses.

In his gospel meetings he Baptized many people. His wife recalls one experience where he wanted to hold a meeting, but the Elders said it would do no good. He persisted, and was told to go ahead but they were going fishing, which they did. A few days later at the river, a man stopped to talk with them and asked if they had heard about the young preacher who had Baptized fifty people. As the story goes, the Elders immediately threw their fishing equipment back on the wagon and headed back to town.

T.B. wrote many articles under the name of the "Country Preacher" which were published in the Firm Foundation and other papers. Most of his life was spent in traveling from place to place holding meetings where he could find an audience. He participated in numerous debates throughout the country, often times converting his opponent to Christ before the debate was finished. The latter years of his life were spent in Duncan, Oklahoma, where he wrote the articles of this book. He was a devoted Christian, thinking always of saving the lost should for Christ. He was closely associated with such great Evangelists as Bro. Rue Porter, Bro. C.R. Nichol, Bro. U.G. Wilkerson, Bro. J.D. Tant, Bro. Joe S. Warlick and many others.

This book is presented with a Prayer that these articles might aid someone who is seeking the truth to "rightly divide" the word, and render obedience to the Gospel of Christ.

Wilkinson - Rosa Wilkinson passed away in Oklahoma City. Okla. at the age of 87. Services were conducted at the South Walker church where she had attended since the beginning of the congregation. Mrs. Wilkinson was born in Tennessee October 25, 1885. She moved to Indian territory and settled near Comanche as a young girl. She was married to T. B. Wilkinson a fine gospel preacher, writer, and debater. Survivors include four sons, Paul G. of Fullerton. Calif ., J. C. an elder at South Walker, A. D. and Tommy of Oklahoma City. Five daughters, Mrs. Louise Ewald. Mrs. Alma Felix. Mrs. Jackie Thompson of North Littie Rock. Ark. and Jo Marshall at home address and Peggy Smith of Bettendorf. Iowa. Also one brother. Raymond Coffman. of Portales. N. M., one sister, Ruby Coffman of Ardmore, Okla. Sister Wilkinson was a devout Christian in every sense of the word. Funeral services were conducted by Pat Abgananto and the writer. Burial was at Duncan, Okla.

Directions To The Grave of T.B. Wilkinson

T.B. Wilkinson is buried in the Duncan Cemetery in Duncan, Oklahoma. Duncan is located SW of Oklahoma City on Hwy. 81. Head SW on I-44 (Note: This is a toll road. Be sure to bring change with you) to Chickasha, and take Hwy. 81 south. Go through Rush Springs, Marlow and Duncan. A few blocks south of Main Street, you will turn right on Cypress Ave. This road will lead you to the entrance of the Duncan Cemetery. As you enter the cemetery, take the second road to the right (1st road is just inside entrance). As soon as you have turned right, stop the car. The Wilkinson grave will be in Section 32, there on your right in Lot 41. While in the cemetery, be sure to go by and visit the grave of Clarence A. Price, located in Block 44, Lot 10. 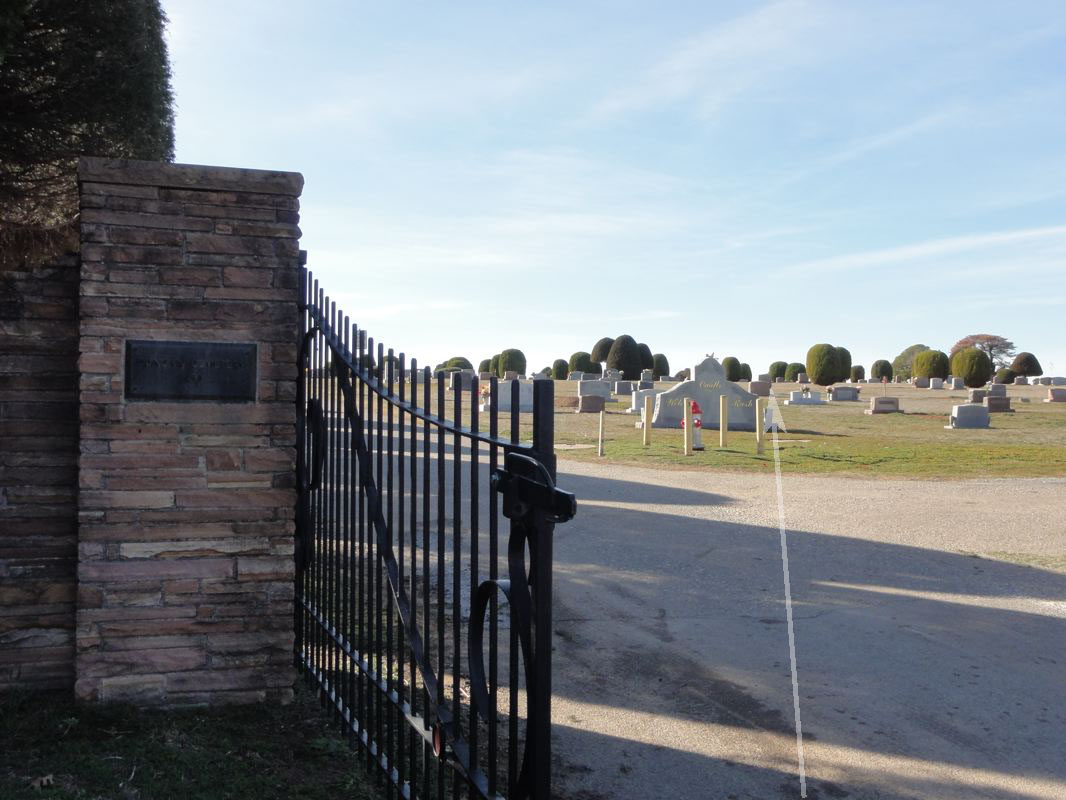 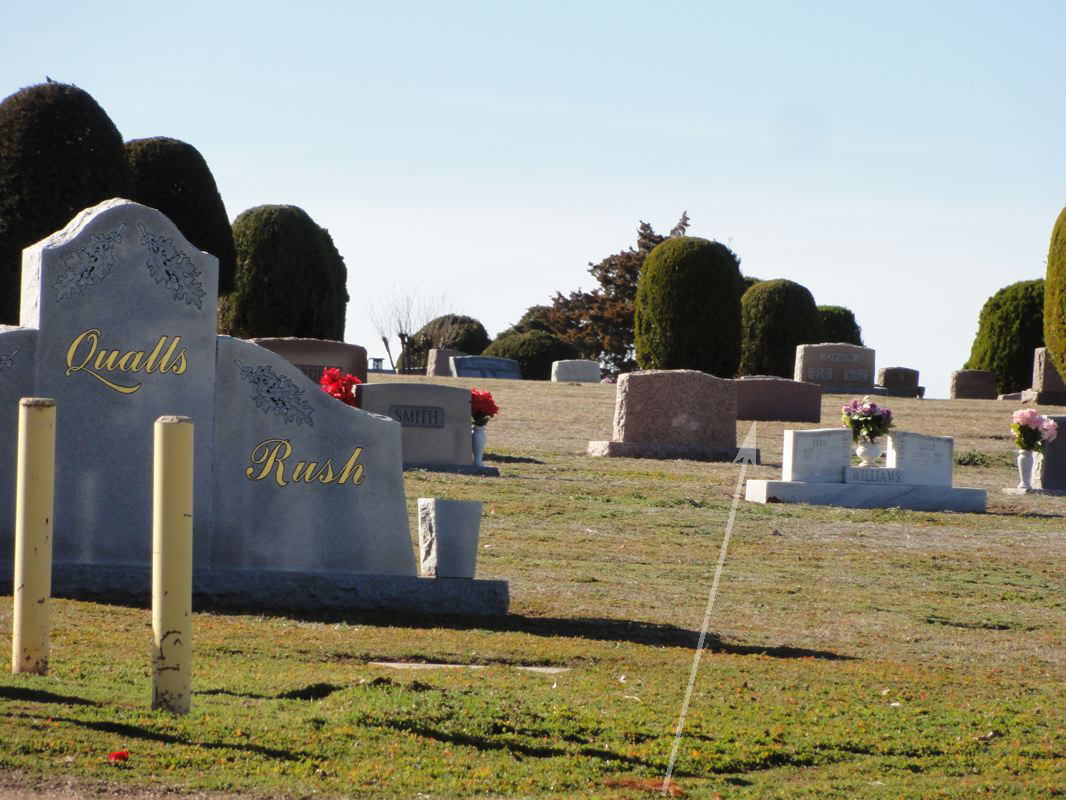 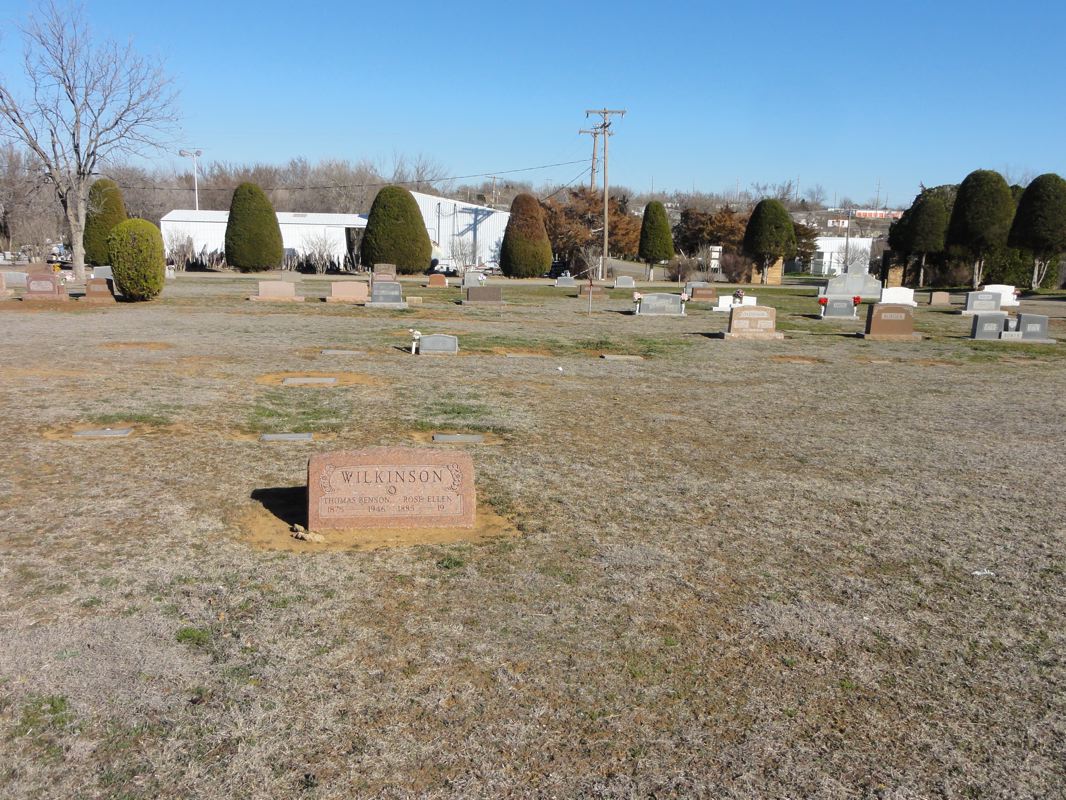 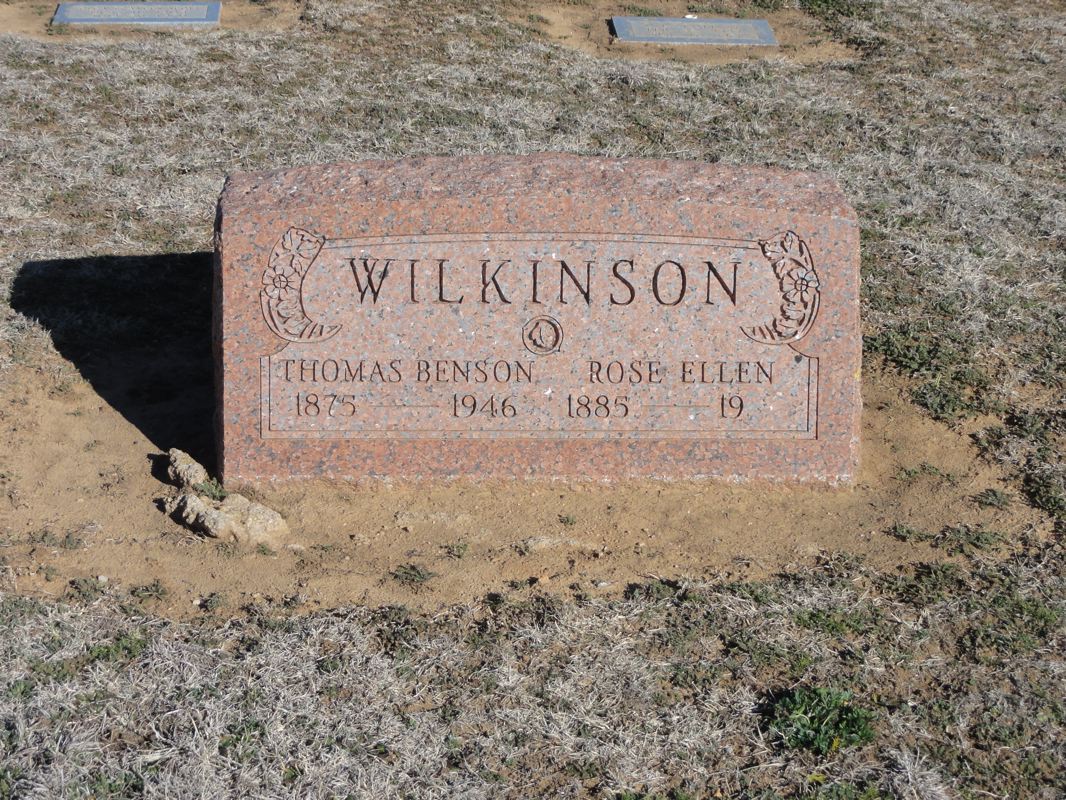 Web editor note: In February, 2012, it was my privilege to visit the grave of T.B. Wilkinson. I was invited to take part in the annual Affirming The Faith Lectureship in Oklahoma City, Oklahoma. Getting into the area early, I was afforded the opportunity to put about 2000 miles on a rental car in order to locate graves of gospel preachers and church leaders of yesteryear in a wide area. My third day I was able to visit the grave of T.B. Wilkinson.