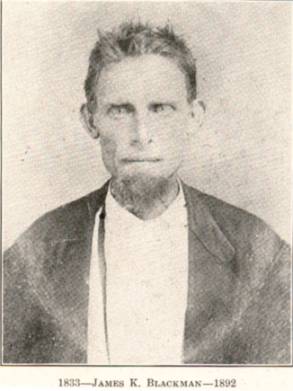 Biographical Sketch Of The Life Of James K. Blackman

James Kennard Blackman was a native of Alabama. He was born in the northern part of Alabama, July 14, 1833. His parents died when he was a small child, so he was left an orphan and never knew his parents. His grandfather on his paternal side took young Blackman and brought him to Maury County, Tennessee. His grandfather lived near where Theta now is. Soon after he was brought to Tennessee his grandfather, who was old at that time, died, and left young Blackman while a mere lad to make his own way in the world. After his grandfather's death he rambled around, and finally came to Franklin, Tenn., to live with some relatives there.

Brother Blackman had but little opportunity to go to school, and consequently had but little education gained from the study of books; but he made a close study of human nature and human affairs until he became a well informed man for his day. He learned the trade of harness making as he grew up and was kept busy making saddles and harness, as horses were used exclusively in his day. While living in Franklin and following his trade he met Miss Mary Caroline Ezell, daughter of James Ezell, who carried the mail on horseback from Nashville, Tennessee, to Columbus, Mississippi. This was before any railroads were built in Tennessee. After several months of courtship, he married Miss Ezell, September 21, 1856, and lived in Franklin three or four years more.

His grandfather's people belonged to the Baptist Church, and young Blackman knew but little about the Bible, as he had never studied it, but he was inclined to the Baptist belief. James K. Blackman was like many people of his day and many even to this good day: he had religious belief without knowing or caring what the Bible taught on any given subject. To him the Bible was a sacred book, but it had not occurred to him that he should study the Bible to know the will of God. Soon after his marriage in 1856 he and his young wife heard Tolbert Fanning preach in Franklin. His preaching was so simple and direct that it made a profound impression on Blackman's heart. He resolved to become a Christian and live as the Bible directed him. The weather was cold and the ice had to be broken in order that he be baptized. He and his young wife gave their hearts to God, and with a zeal that could riot be chilled they were baptized into the Lord Jesus Christ on a very cold day. He was in earnest and was determined, not only to live the Christian life, but to teach the way of salvation to others. He began to study prayerfully the Bible, and soon gained a very accurate and full knowledge of the sacred truth revealed therein.

Soon after he became a Christian he moved to Linden, in Perry County, Tennessee, and began teaching school. He was successful as a teacher. He continued to teach in Perry County until 1861, when the Civil War so disturbed the people that he ceased teaching and came to Davidson County. He helped to establish the church at Linden. After the war closed, he moved near Nashville and began teaching school a few miles out of Nashville on the Hillsboro Pike. Here he farmed and taught school. He was a great reader and studied the Bible with all the help that he could get and prepared himself well to preach the gospel. While living near Nashville be made an earnest effort to establish congregations in and around Nashville. There were very few churches in Davidson County at that time. Through his efforts, together with other faithful men, a congregation was established on the Hillsboro Pike. Brother Blackman was largely instrumental in establishing the church and in instructing it more accurately in the way of the Lord. Again, he and his family helped to establish the church on the Granny White Pike, which was known as "Compton's Chapel." When the church house was built at Compton's Chapel, the brethren desired that Brother Blackman preach the first sermon in the house. This was done as recognition of his modest and faithful service to them and to the Lord.

Brother Blackman next moved to Indian Creek, on the river road out of Nashville. Here he found four or five members of the church, but they were not meeting for worship on the Lord's day. Brother Blackman began to instruct them and encourage them to worship God according to the New Testament order. He soon had a congregation meeting regularly at Hurricane Church, which was near his home. Brother Blackman helped to establish congregations at Sam's Creek, Sycamore Mills, Greenbrier, Dog Creek, and Little Lot. He visited all these places, frequently making his trips on horseback. Sometimes his good wife would accompany him, riding horseback also. He gave much of his time to preaching the gospel and strengthening the churches in Davidson and Cheatham counties. In many communities where there was no house in which to meet for worship, be would go into the woods and prepare rude seats for the people and invite them to come and hear him preach. Before the church was established at Cub Creek, in Cheatham County, he preached many times in a beech grove near there. Later Brother Granville Lipscomb and Brother David Lipscomb preached there and established a good congregation.

Brother Blackman possessed a timid, shrinking disposition, but be had a quick, keen mind. He was a good man, and always studied the Bible closely to know the will of God. He was a good teacher of the Scriptures and wrote frequently for the Gospel Advocate. His articles were always thoughtful and instructive. He was not a forceful speaker, but was a good teacher in the congregation. He was well informed on the topics of the day, but his chief interest was centered on the Bible. In the homes and private circles of his community he was a master of the situation in discussing Bible topics. Much good was done by him in teaching men in the private walks of life. No man could defend the truth with more power and simplicity in the private circles than could Brother Blackman. He not only knew the truth, but be also knew the different theories of religion as taught by the denominations, and he was able to point out clearly the errors of human systems and give Scriptural proof of the truth that be maintained.

Brother Blackman reared a family of seven children, and all of these became active members of the church. It was a rich contribution to the cause of Christ to give seven well-trained members of his family to the active service of the church. While Brother Blackman did not become a renowned preacher of the gospel, yet his preaching, did much good, and many today are reaping some of the fruits of his labors. During the active period of his life he was associated much with Brethren Frank Davis and David Lipscomb. He died on November 16, 1892. Funeral services were held by Brother Lipscomb at Watkins Chapel. His body was laid to rest in Mount Olivet Cemetery, near Nashville. Brother Blackman left a noble example of self-sacrificing faith and trust in God. His labors were many, his earthly rewards were few, but a crown of righteousness awaited him at his coming.

Directions To The Grave of J.K. Blackman

James K. Blackman is buried in the Mt. Olivet Cemetery, Nashville Tennessee. The cemetery is located on Lebanon Pike, Southeast of downtown. Click over to Mt. Olivet for map and location of the grave in the cemetery. His remains rest in Section 10 Lot #512 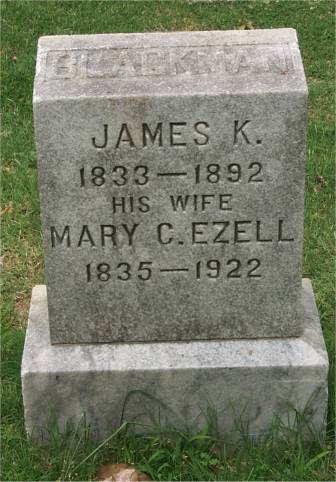