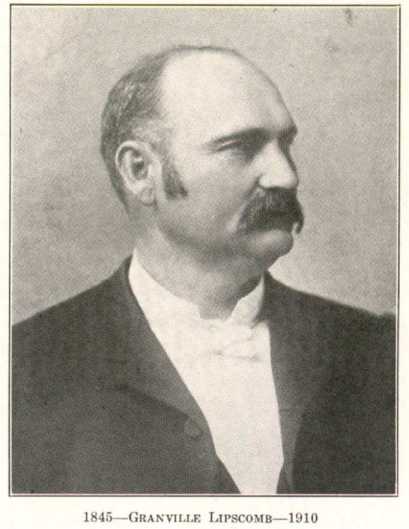 Biographical Sketch On The Life Of Granville Lipscomb

The cause of Christ in Middle Tennessee is perhaps stronger than in any other section of the Southland. One reason for this is that there have been so many strong, stalwart men in the faith who consecrated their lives to the preaching of the gospel. Any cause will prosper if it has strong leadership; no cause spreads rapidly without strong men to propagate it. Among those strong preachers of the gospel who devoted much time to preaching in Middle Tennessee was Granville Lipscomb.

Granville Lipscomb was born on June 18, 1845, in Franklin County, Tennessee, not far from Huntland, Tenn. He grew to manhood in his native county, and was trained according to the strict standard of rearing children that prevailed at that time. His father died when he was eight years old, and his training was received from his mother. (Granville and Jane Lipscomb) She was one of those industrious, pious women who had strong native ability, with a deep religious nature. She was strict in her discipline, yet kind and affectionate toward her children. She felt the responsibility of rearing her children in the nurture and admonition of the Lord. She taught her children the Bible and to fear God and keep his commandments. Children reared in such environment become strong characters and valiant servant, in the kingdom of God.

The Lipscomb family was one of the best families in the county. It was thrifty and bad a surplus of this world's goods. Granville Lipscomb was a brother to the lamented David Lipscomb and that prince among scholars, William Lipscomb. His education was had in his own county until be was about grown. He attended Franklin College and studied under Tolbert Panning, He and the justly famous T. B. Larimore were roommates and classmates in Franklin College. Brother E. G. Sewell, though much older than Granville Lipscomb, was a student in Franklin College at the same time. Brother Lipscomb was endowed with splendid powers of mind by nature, and he applied himself to his courses in college with such energy and persistency that he became truly an educated man. He had a general fund of knowledge which he used to a great advantage. His knowledge of the Bible was thorough and profound.

At the age of twenty-four years Brother Lipscomb began to preach the gospel. He was formally ordained to preach by fasting, prayer, and the laying on of hands at Salem church house, in Franklin County, Tennessee, on Monday, September 29, 1869. The ordination service was conducted by Elders Mosley, N. W. Carter, and R. N. Mann. Brethren Jesse L. Sewell, T. W. Brents, and T. J. Shaw were the visiting preachers who assisted in this service. This was a solemn service, and Brother Lipscomb always remembered the vows that he had taken and the dedication of his life that he had made there to be faithful in preaching the gospel. Brother J. D. Floyd heard him preach his first sermon after he had been ordained to preach. This was at New Hermon one night in the week of a meeting conducted by Brother T. J. Shaw. Brother Lipscomb soon developed into a very strong preacher of the gospel. He preached in nearly all the counties of Middle Tennessee. He labored much in mission work, establishing congregations in many places and strengthening the weak ones. His popularity grew, and his fame spread abroad until he was called into nearly all the Southern States to preach the gospel.

Brother Lipscomb was not only a successful preacher of the gospel, but he was also a ready writer. His writings were clear and Scriptural. No one could read anything from his pen without being instructed and impressed with a deep reverence, which he had for the word of God. Brother Lipscomb wrote for five years the Sunday-school quarterlies published by the Gospel Advocate. His notes on the lessons show his thorough knowledge of the Bible and his earnest desire to teach young people and others the word of God. He wrote the quarterlies and continued his preaching. He contributed at the same time articles for the Advocate. He was abundant in labors and seemed not to tire in working for the Lord.

Brother Lipscomb was a useful man, not only as a preacher, but as a neighbor and a citizen. He operated a farm, and in a large measure supported his family in that way. He bought a farm adjoining his brother David Lipscomb's farm, near Nashville. This brought him into a new field of activity and brought him in touch with the churches of Nashville. He gave much time and labor to the establishing of congregations in and around Nashville. At one time he served as chaplain of the State prison. He was tender-hearted and sympathetic toward the unfortunate, and with the gospel truth made a strong appeal to the better nature of the unfortunate who were committed to that penal institution.

While preaching at New Hermon in Bedford County, Tennessee, he was stricken with paralysis. His first sermon was preached at New Hermon, and then his last sermon, more than thirty-five years afterwards, was preached from the same pulpit. It was pathetic that he should be stricken while in the pulpit proclaiming, the word of God. He lived about six years after he was stricken, but was unable to proclaim publicly the gospel. He was interested in the progress of the gospel and the peace and welfare of the churches. He died on February 20, 1910.

Brother Lipscomb contributed a useful life to the cause of Christ, and passed into triumph and hope to the larger and fuller life of the redeemed of earth.

Directions To The Grave of Granville Lipscomb

Granville Lipscomb is buried in the Mt. Olivet Cemetery, Nashville Tennessee. The cemetery is located at 1101 Lebanon Pike, Southeast of downtown Nashville. Click over to Mt. Olivet for map and location of the grave in the cemetery. His remains rest in Section 14 near, but not in the same plot as David & William Lipscomb, his step-brothers, and a host of other great gospel preachers of yesteryear. 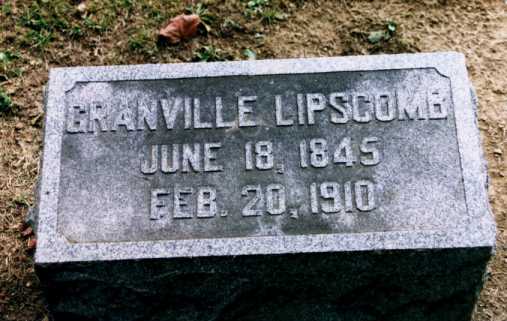