Biographical Sketch On The Life Of H.J. Boles

The subject of this sketch is another one of God's heroes who lived and labored and loved almost in obscurity. Henry Jefferson Boles was born in Caldwell County, Ky., on November 19, 1845. His mother was the daughter of "Raccoon" John Smith. Those who are familiar with the history of Elder Smith will recall that while he was away from home, his house and two children were burned. Two small children were rescued from the burning building. One of these little girls was the mother of the subject of this sketch and the grandmother of the writer.

H. J. Boles was the grandson of "Raccoon" John Smith. He had been in the company of Elder Smith many times and had heard him preach often. He had a strong desire, while but a boy, to be a preacher of the gospel like his illustrious grandfather. He was about sixteen years old when the Civil War began. He enlisted in the Union Army at the first of the war and remained in the army four years till the close of it, and was given an honorable discharge. He was wounded three times, and carried the scars to his grave. After the close of the war he never had any opportunity of attending school. There were few schools at the close of the war, and so his opportunities were small for an education. However, he was endowed with strong intellectual powers and had a thirst for knowledge, and through reading and close observation he acquired a splendid education which enabled him to be a great servant of his fellow men.

At the age of twenty-five he was married to a distant cousin, Sarah Smith, a grandniece of "Raccoon" John Smith. Soon after his marriage he moved from Kentucky to Jackson County, Tenn. He had six children by Sarah Smith. The third one of these children was H. Leo Boles. After the death of his wife he was married to Mrs. Alcie Brown, daughter of Dudley Haile, a preacher of the gospel in Jackson County. Three children were born to this union. After the death of his wife he was again married, on April 27, 1887, to Miss Adina Golden, near Sparta, Tenn., and to this union nine children were born. All together he fathered 18 children.

He did not become a Christian until after he came to Tennessee. He had an inquiring mind and was argumentative in his nature. He began discussing religious subjects publicly with a Baptist preacher even before he was baptized into Christ. In one of his public discussions a Baptist preacher charged him with not believing that for which he was contending, as he had never obeyed the gospel. He felt keenly the force of this statement and told his wife the same night that he was going to obey the gospel the next day. This he did, and was baptized at Antioch, in Jackson County, by Andrew P. Davis. He at once challenged the Baptist preacher for another discussion, and his challenge was accepted. After this discussion he began preaching the gospel, and continued his labors as a preacher for fifty-three years. Two years after he had begun preaching he baptized the Baptist preacher with whom he had debated. He preached in all parts of Jackson County, and established many congregations and baptized hundreds of people in that county.

In 1879 he moved from Jackson County to White County, Tenn., and located on Cherry Creek, in that county, about seven miles from Sparta. He was successful as a business an and farmer. He made his living and supported his family from the proceeds of his farm and business. He expected nothing from his preaching and received very little for it. In 1890 he and J. K. Walling, the brother of the late H. L. Walling and the venerable Jay Walling, of McMinnville, Tenn., made a tour through the northern part of Georgia and Alabama, preaching the gospel. On this trip a number of congregations were set in order and other churches were strengthened and encouraged in the work and worship of the Lord. Later he made a trip to Oklahoma and preached acceptably there. However, his preaching was largely done in the rural districts of Tennessee and the mountains of Kentucky. He established hundreds of congregations and baptized thousands of people. He was modest in his labors and never reported to the papers any of his meetings or the results of these meetings. Many of the churches which he established are now flourishing congregations, while others have ceased to be. There are now living more than a dozen preachers whom he baptized and whom he encouraged to preach the gospel. He labored much in Jackson, White, Dekalb, Warren, Putnam, Overton, Clay, and Pickett counties, in Tennessee, and in the border counties of Kentucky.

His style of preaching was plain and simple. He labored among the common people and adapted his preaching to that class. He was a practical man, a preacher with only one book the Bible. He seldom used an illustration that was not taken from the Bible. He never studied formal logic, hot his sermons were always logically arranged and forcibly delivered. His sermons were so plain and practical that it was hard for his hearers ever to forget the strong arguments that he made. He announced his proposition with clearness and then proceeded to prove it by an array of Scripture quotations. He did not hesitate to compare religious theories with the truth of the Bible. In a kind way he named publicly the religious bodies that held certain theories which contradicted the truth. He was net offensive in calling the names of different denominations which preached and practiced popular errors of his day. He was fair in representing the doctrines of denominational churches and convincing in his arguments against these errors.

He was often drawn into public discussions with the preachers of the different denominations. He had debates publicly with Baptists, Methodists, Presbyterians, Mormons, and the Holiness people. He never hesitated one moment when opportunity was offered to defend the truth of the Bible. He rather enjoyed these discussions and accomplished much good by them. Though not an educated man, yet he was mighty in the Scriptures. He often said: "I want nothing but the truth, and I have nothing to fear from investigation of what I preach."

He labored so much in rural sections where there were few gospel preachers, often none but himself, that he welcomed the assistance of his fellow preachers in the field of his activity. He rejoiced in the success of other preachers as much as in his own success. As he reached the declining years of his life he could not understand why preachers should be jealous of each other. He could not understand why one preacher of the gospel could not have the freest fellowship with other preachers of the gospel of Christ. He traveled much on horseback in his eartier days of preaching, but later traveled with horse and buggy.

In January, 1889, he moved from White County to Dekalb County, Tenn. There was no church there, but within two years he had a good working congregation near his home. Within five years he had another congregation at work not far from his home. In October, 1916, he moved from Dekalb County to Dibrell, in Warren County, Tenn., and later, in October, 1919, he moved to McMinnville, Tenn. Here he spent the evening of his life in feeble health. On September 6, 1923, he passed to his reward. Funeral services were conducted in the church house at McMinnville by E. A. Elam, assisted by J. Paul Slayden, and his body was interred in the beautiful cemetery at McMinnville. A simple monument marks the resting place of his ashes.

Directions To The Grave Of Henry Jefferson Boles

H.J. Boles is buried in the Riverside Cemetery in McMinnville, Tennessee. From I-24 in southern Tennessee take Exit 111 and travel east on Highway 55. When you come into McMinnville take the Business Hwy. 55 Exit. Coming into McMinnville, cross the river bridge and take the first right on Cemetery St. Go to the Stop Sign, and enter the cemetery on the corner of Cemetery St. and Bridge St. As you enter the cemetery take the left road. As you travel down with the cemetery wall on your left and graves on your right, you will notice paths between sections of graves large enough for a hearse to get into. From the gate you will travel down four paths. When you get to the fourth path count three graves in and Boles grave is facing south. I saw this grave in June, 2002. The actual GPS location of the grave is: 35°40'34.2"N 85°46'20.8"W / or D.d. 35.676152, -85.772445 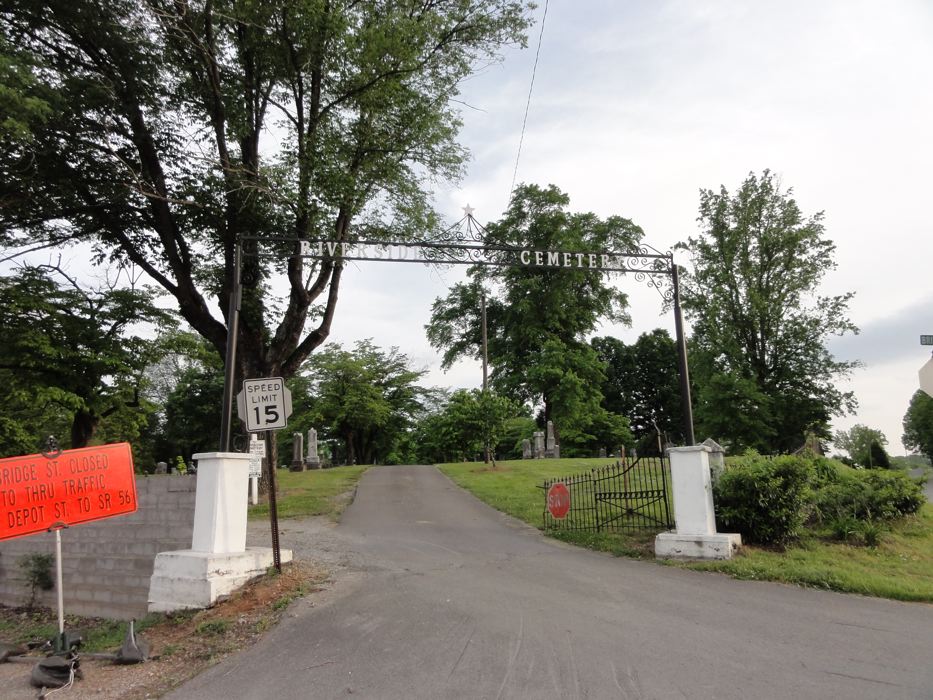